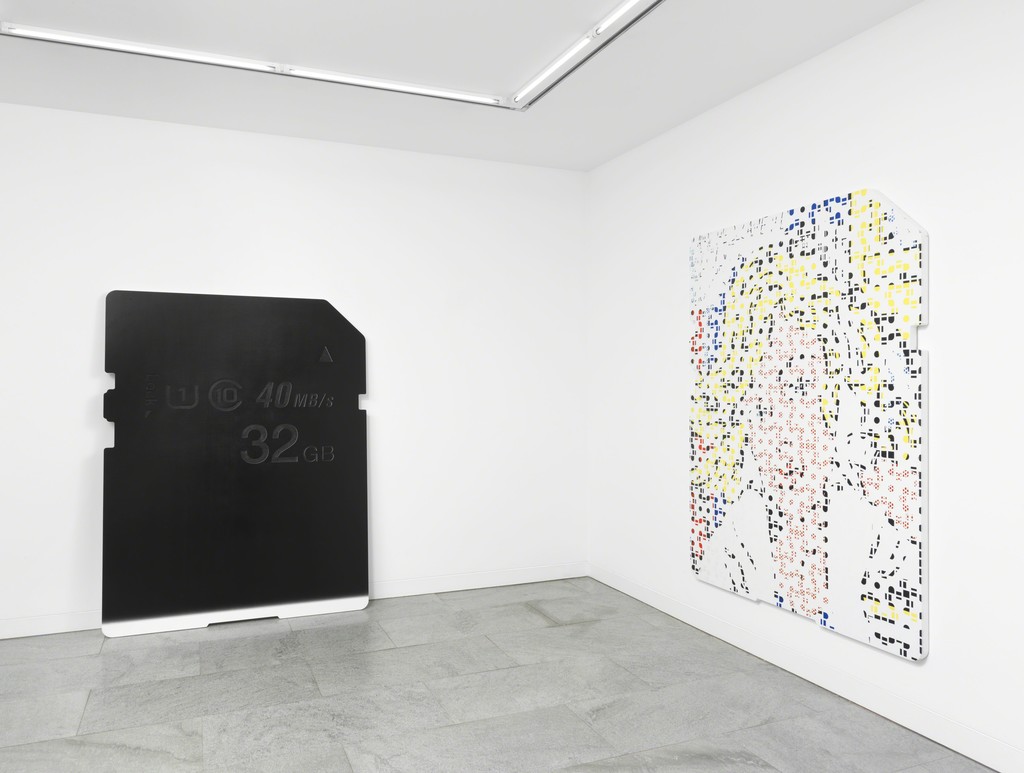 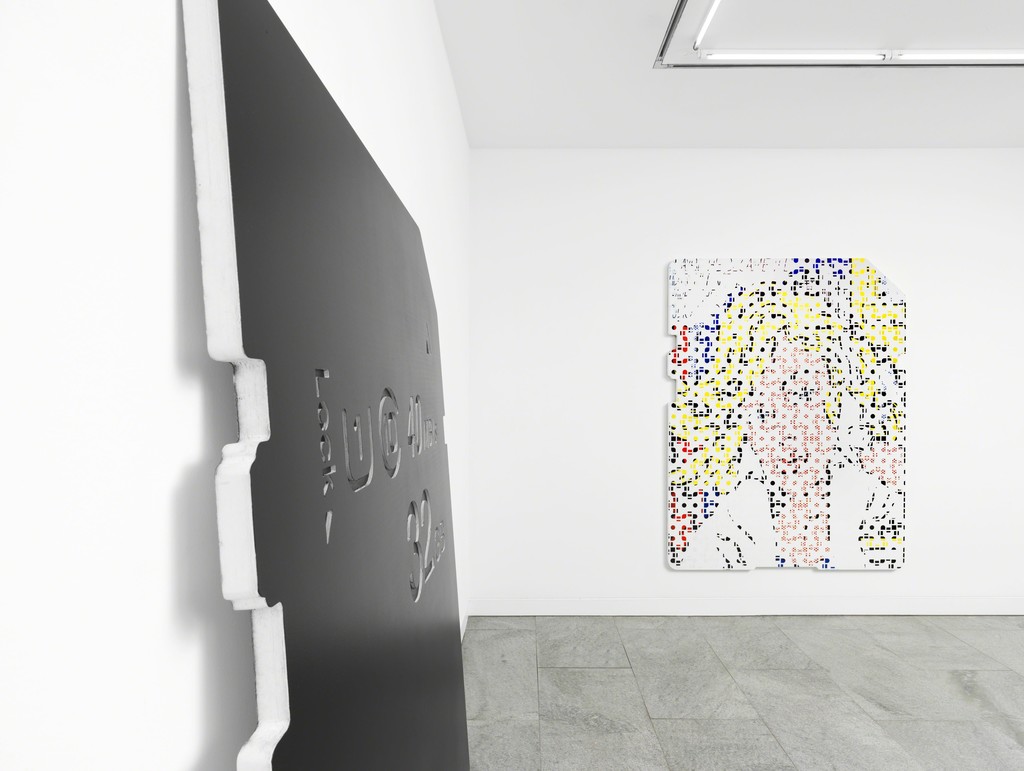 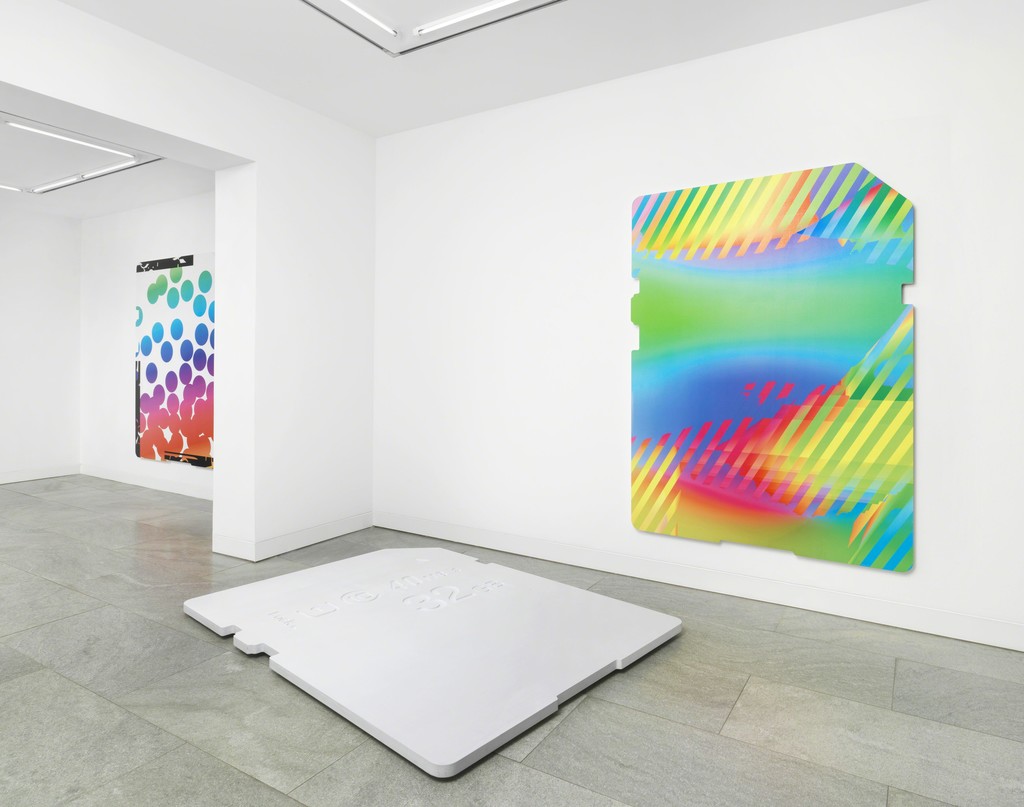 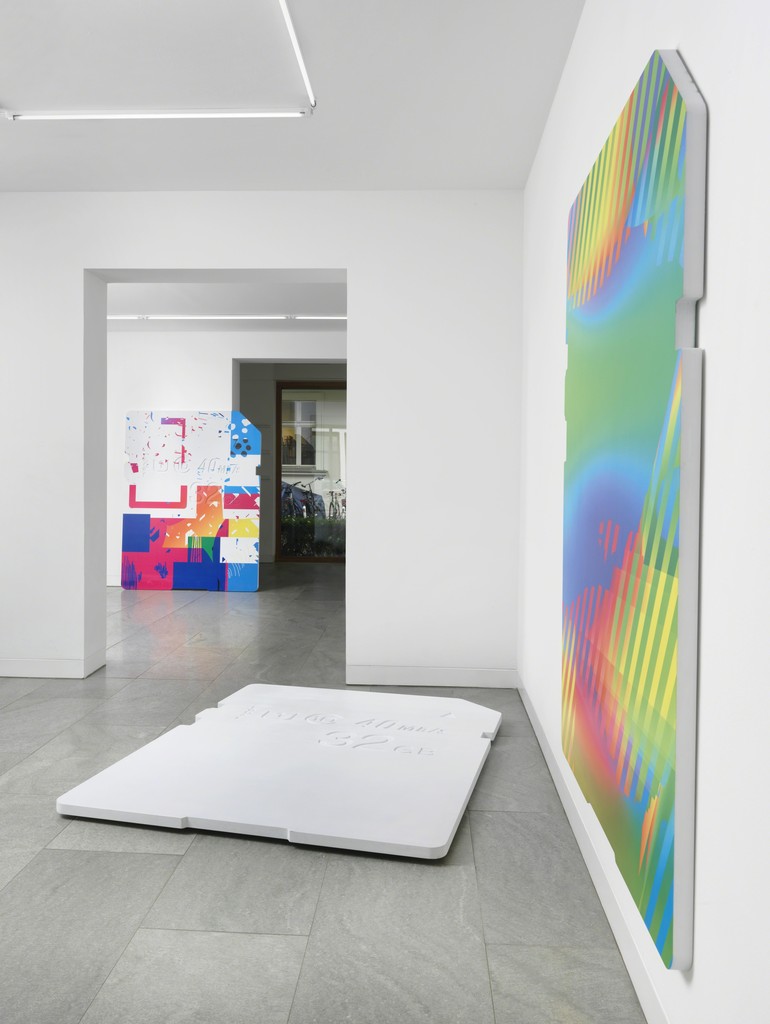 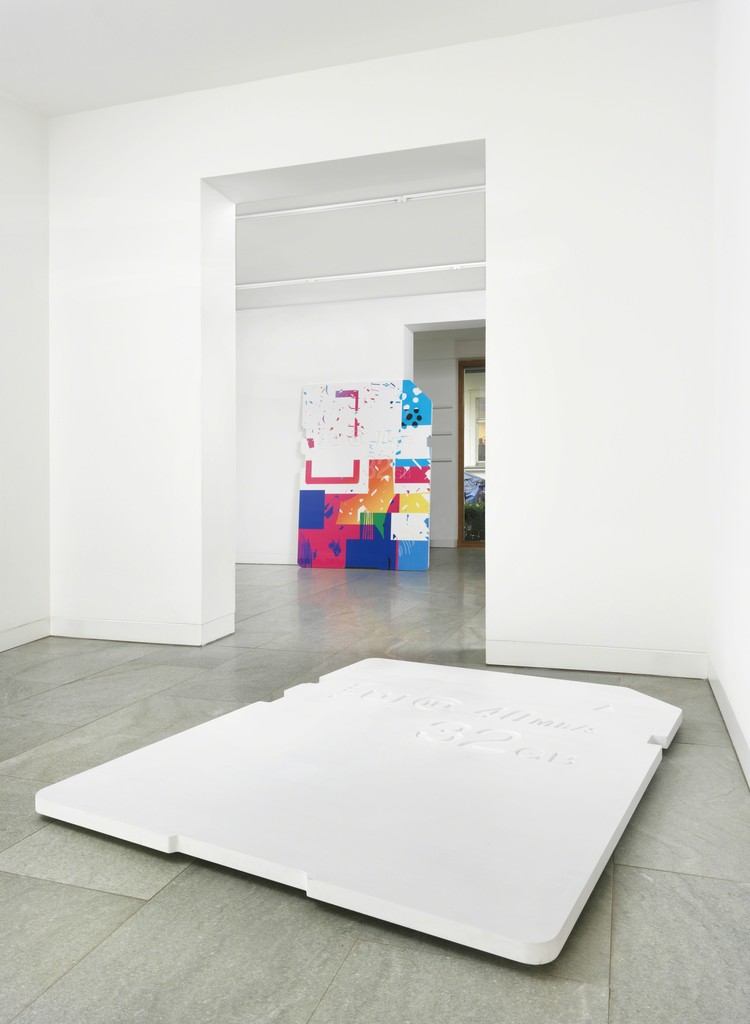 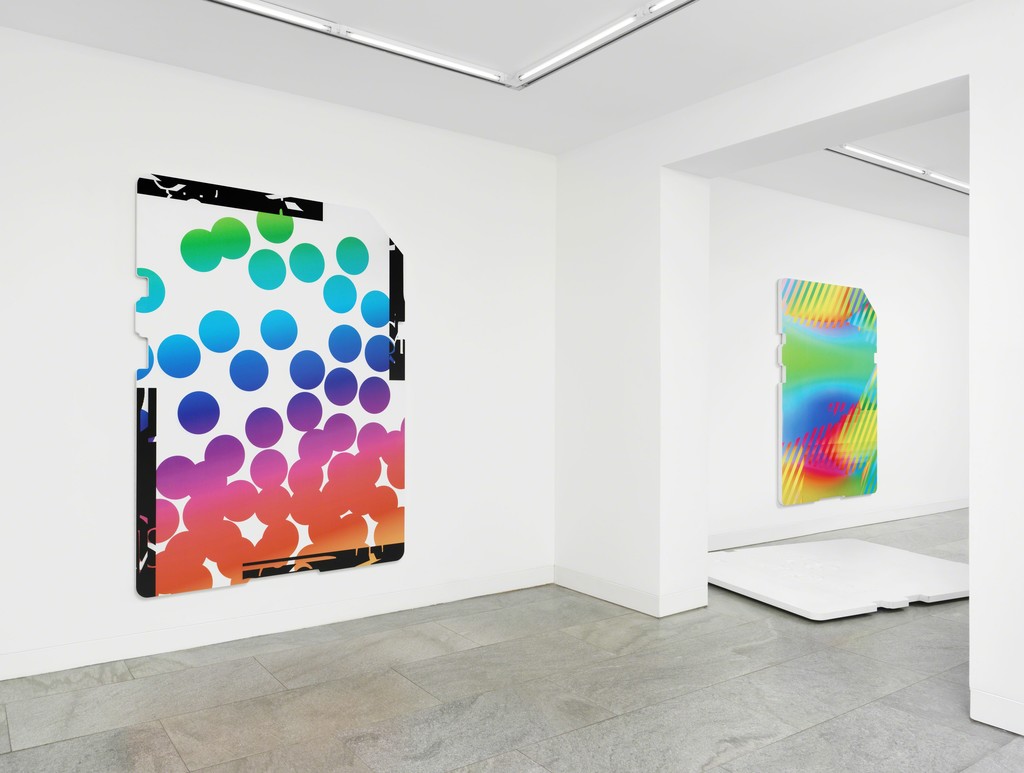 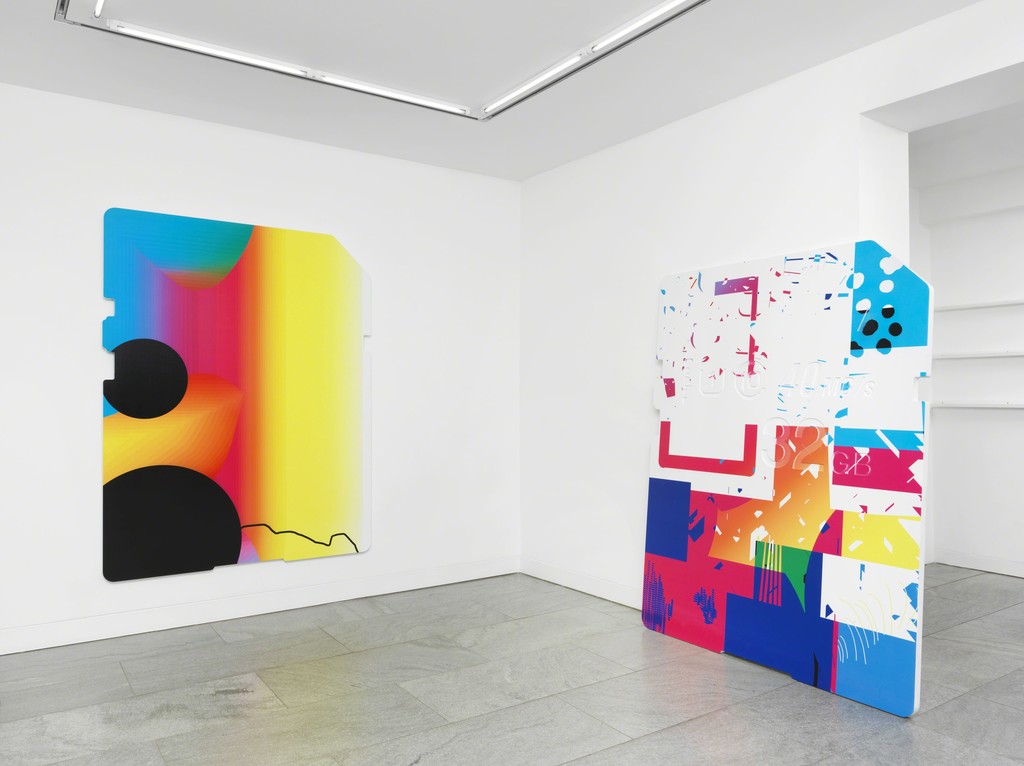 Lars Dittrich and André Schlechtriem are pleased to present DEF., the gallery’s second solo exhibition of art by Dennis Loesch. Loesch (b. Frankfurt am Main, 1979), whose creative output charts the conceptual borderland between pop and minimal art, presents new works at DITTRICH & SCHLECHTRIEM that spotlight an overlooked icon of our time: nine outsize SD memory cards measuring 200 by 153 cm, exact replicas of the proportions of the factory-made originals. Mounted on or leaning against walls or resting on the floor, the monumental objects, made of wood and printed with computer-generated imagery, might almost be unreal apparitions, like playing cards transported into the gallery’s rooms from a distant past or future. By upsetting the viewer’s sense of scale, Loesch’s installation raises the question of the relationship between immaterial data and their physical carrier media from a new angle, making DEF. an exploration of an unexpectedly iconic layer of meaning.
Objects that we playfully balance between our fingers in daily life and that form part of the clutter on desks and DJ consoles appear in the guise of an informational interior, gigantic data interfaces that interact directly with the visitor’s body. At first glance, the SD Cards seem to embody a sculptural idea, but they simultaneously also serve as a support medium for imagery distilled from processes of scanning and rendering: neon-colored ‘screen savers,’ graphical black-and-white scenarios, and dense compilations of detail-rich photographic series activate expansive surfaces marked here and there by the models’ technical specifications milled into the wood. Scattered across the gallery space, the SD Cards seem to be hybrids, defying unambiguous classification either as sculptures or as media for images. Precariously balanced between the flatness of the digital print and the overwhelming physical presence of the physical thing, they recall the potentially unlimited data streams that pass through the reference objects. By resizing them, the artist also highlights their central role in an electronic culture that has made a habit of indefinitely archiving even the least relevant bits of the enormous streams of data—selfies, software updates, downloaded series—it generates.
DEF. takes the inter-media combinatorial operations that underlay in Loesch’s earlier work to a radical new level; the motifs of enlargement and conceptual variation engender a new visual system. Where the artist’s ‘screen-like’ Memory Sticks are based on a minimalist aesthetic of storage systems reduced to their formal essence, Loesch now brings out their implicit sculptural tendencies and foregrounds the three-dimensional shape of the storage media themselves: improbable objects whose off-the-shelf prototypes are usually concealed in the inaccessible interiors of our electronic devices, briefly emerging when we exchange them as abstract islands of data that fit into the palms of our hands. The exhibition’s title, DEF., recalls the definitional gesture of inscription in the process of saving data and reveals the constant clicking sound of our smartphones’ cameras to be a strategic construction of compressed realities of life.
By resizing and reevaluating the omnipresent and universally available storage media of the present moment, Loesch sensitizes us to a surprising historic dimension: given competition being waged in California to achieve ever higher capacities, any particular model is fated to rapid obsolescence. The growing use of anonymous and delocalized cloud storage also makes us increasingly aware of the physical identity of the “Secure Digital” card. By re-envisioning it as an art object, Loesch effects a semiotic opening, a symbolic disruption of its invisible functionality, confronting the clinically sterile reality of hardware with a blend of private and professional archival data and transforming the neutral representatives of an unprepossessing storage system into personalized graphical scenarios. DEF. turns the postmodern industrial paradigm with its single-minded focus on miniaturization on its head: the quest for ever smaller and less visible gadgetry is upstaged by processes that aim for the enlargement, activation, and recontextualization of device interfaces. With his supersized SD Cards, the artist has created carefully programmed mirrors of our visual data culture, inter-media monuments whose technological templates will soon strike us as relics of a digital antiquity.
DITTRICH & SCHLECHTRIEM will publish a catalogue accompanying the exhibition. Please contact Owen Clements, owen(at)dittrich-schlechtriem.com, for press information and with any further questions.