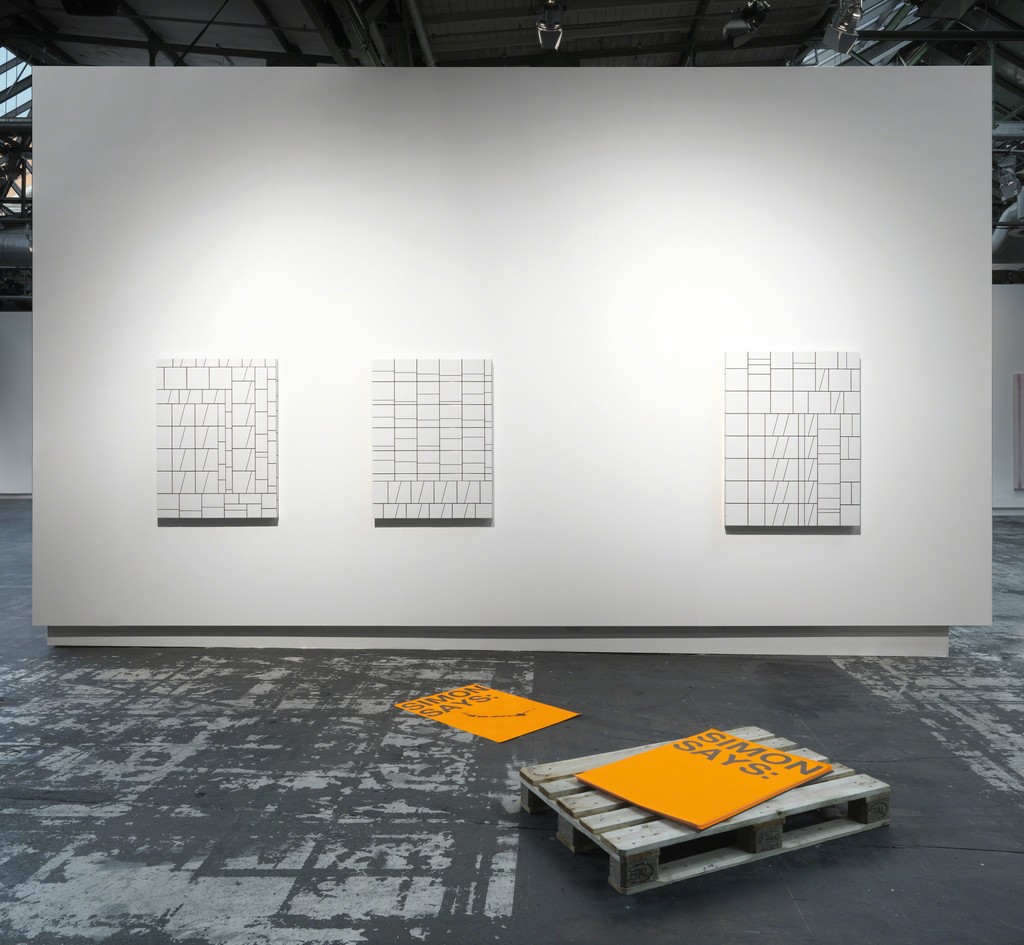 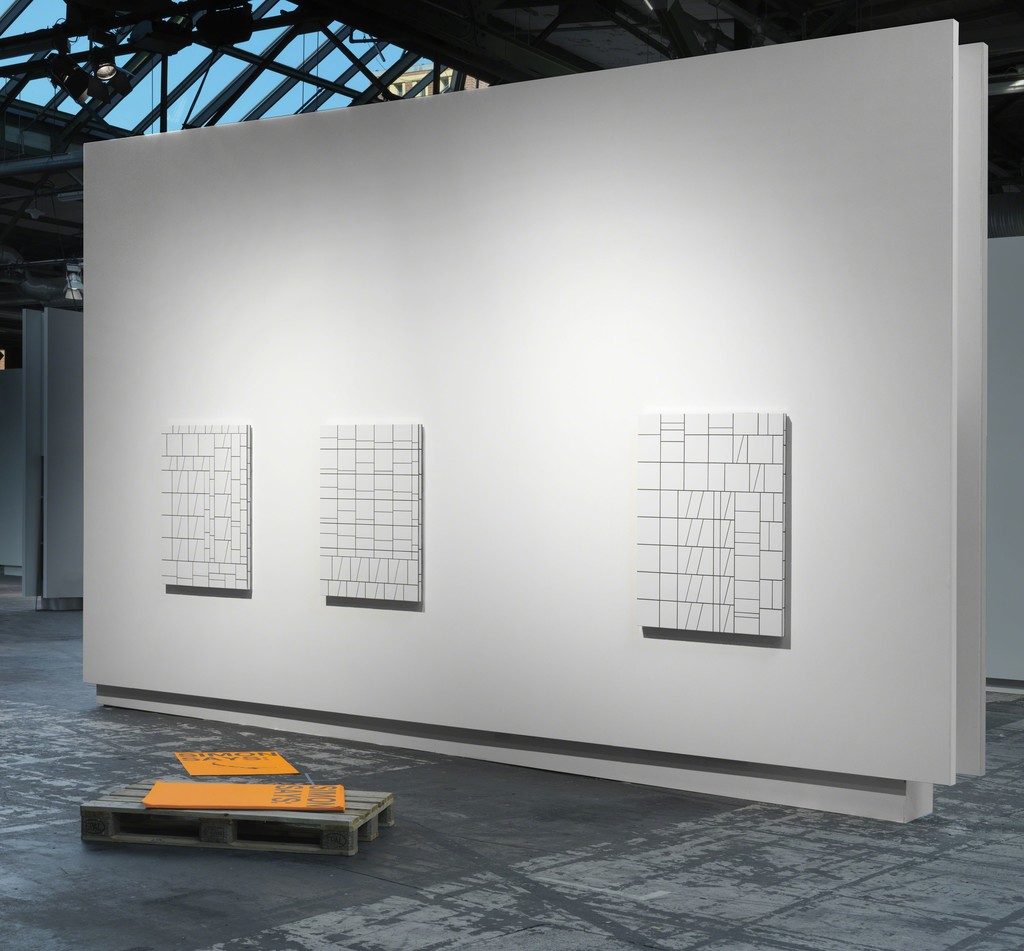 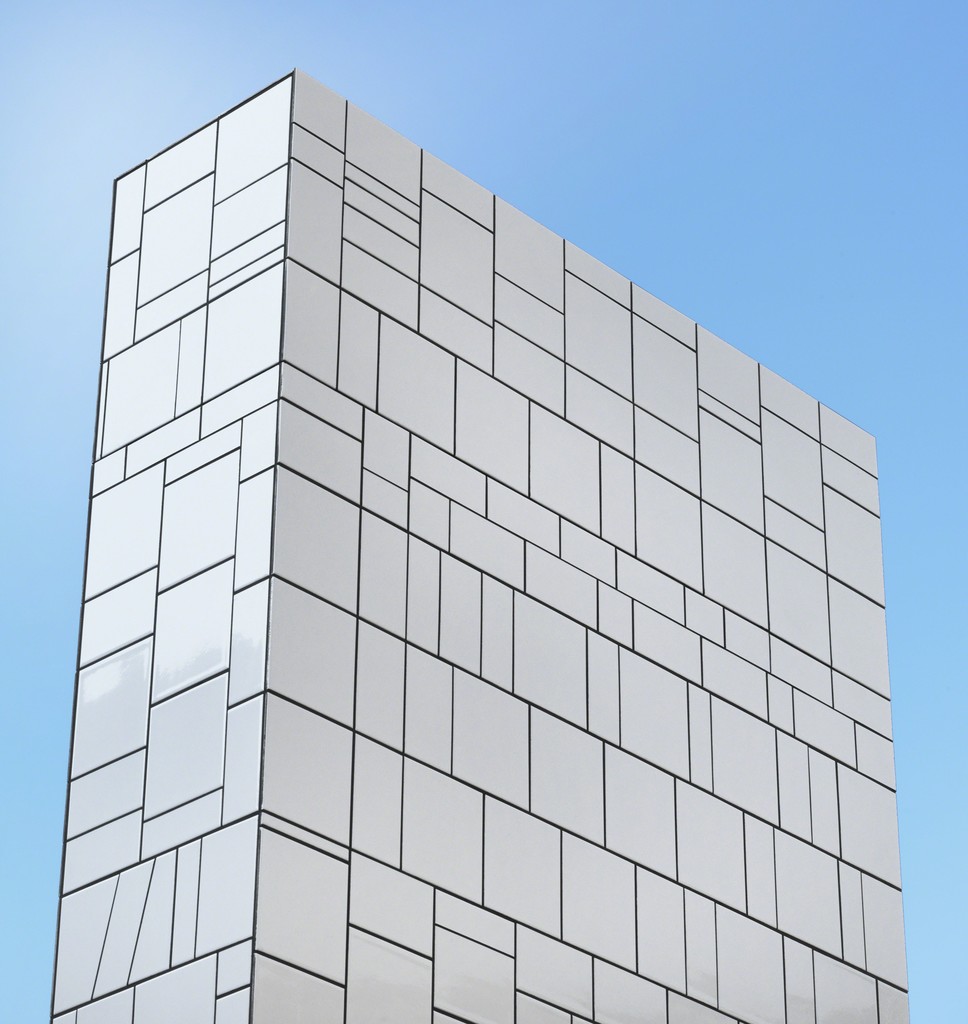 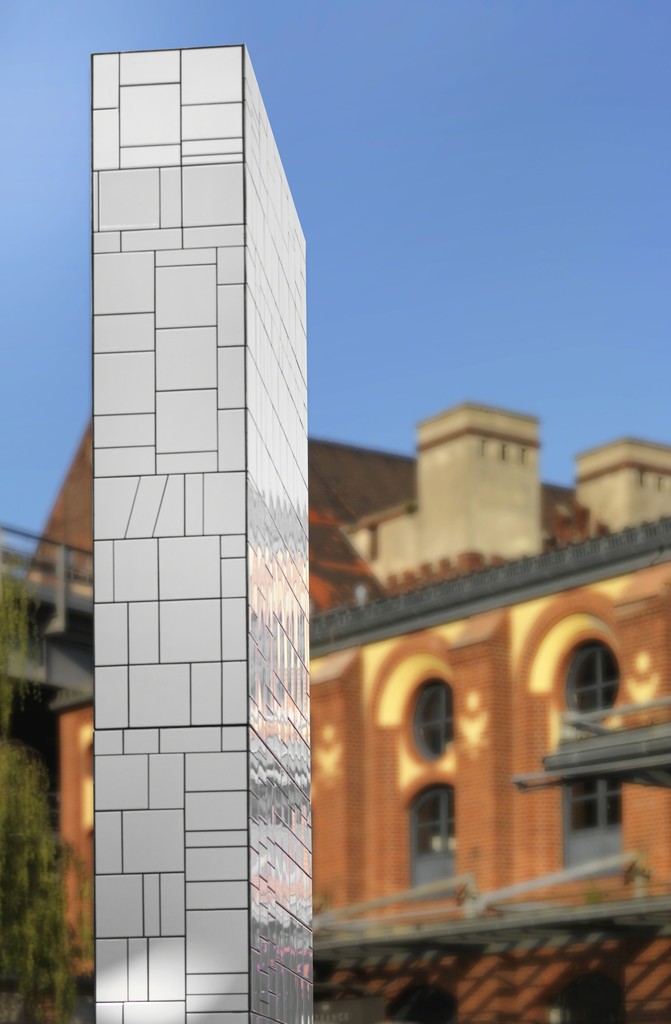 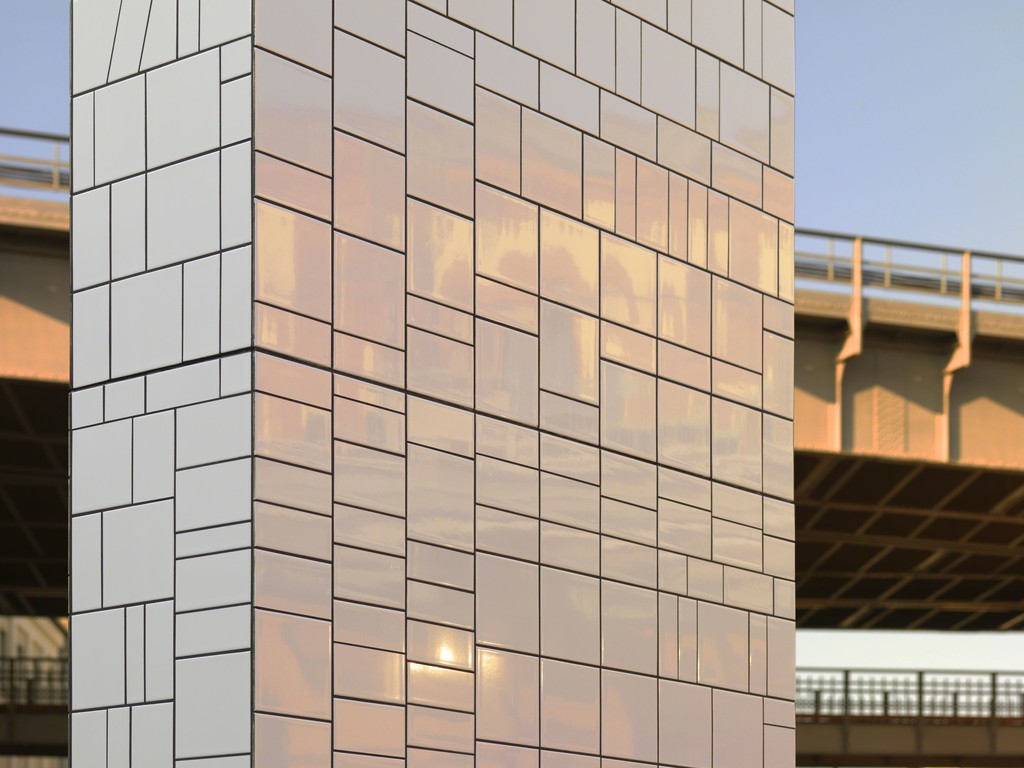 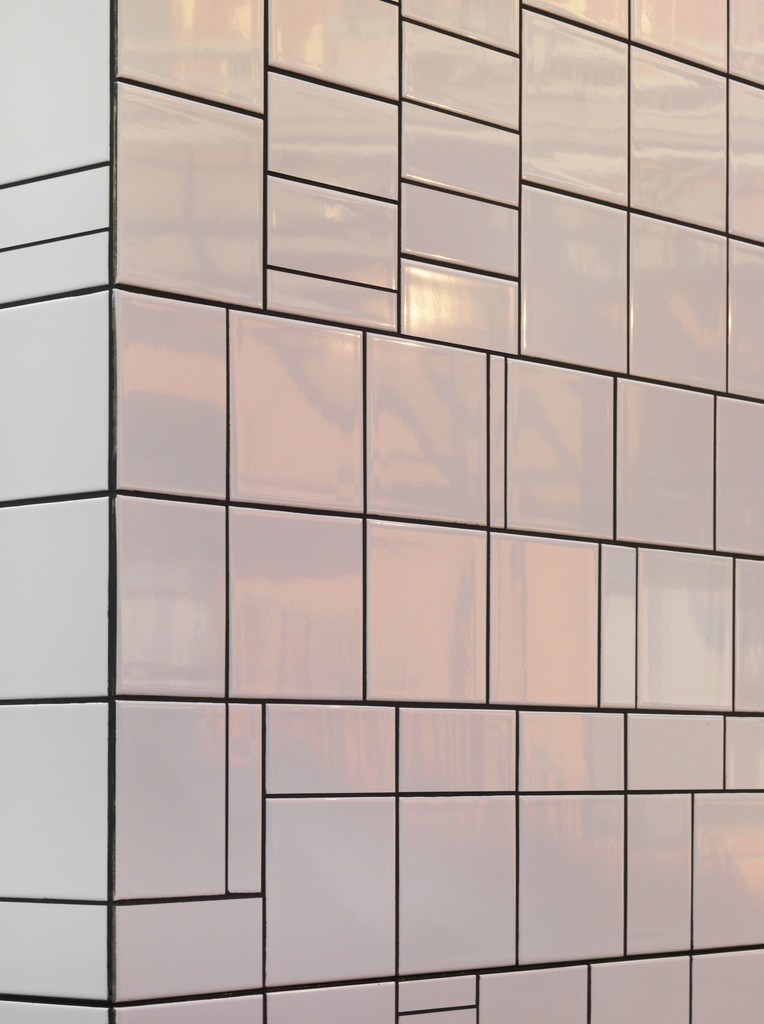 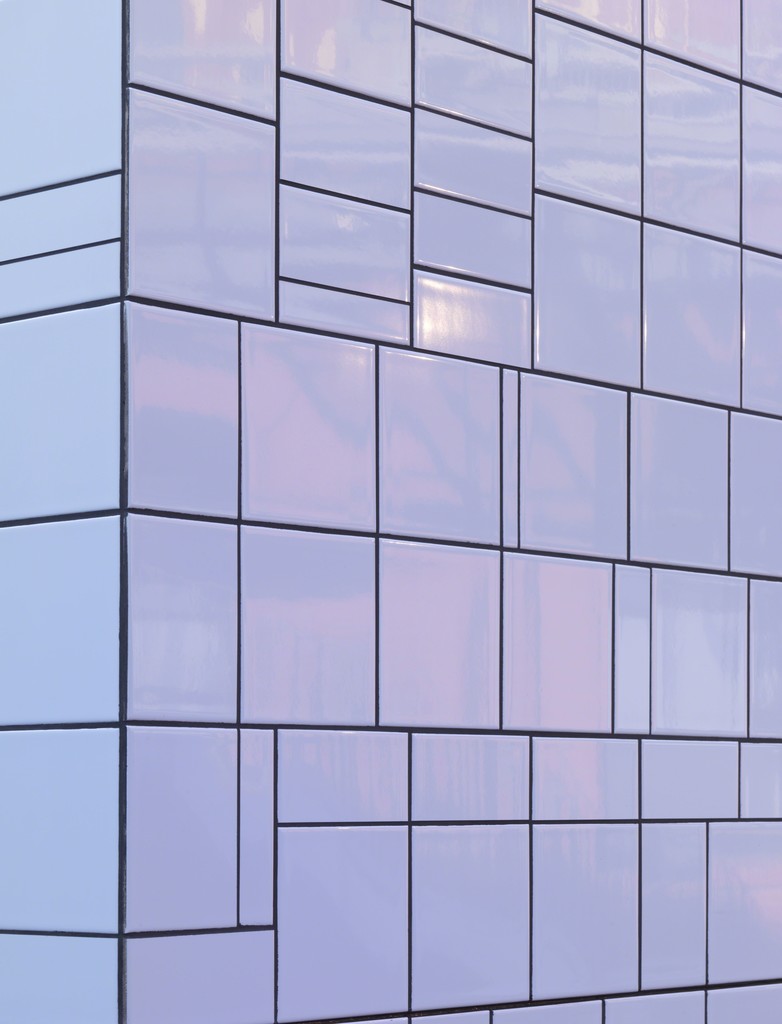 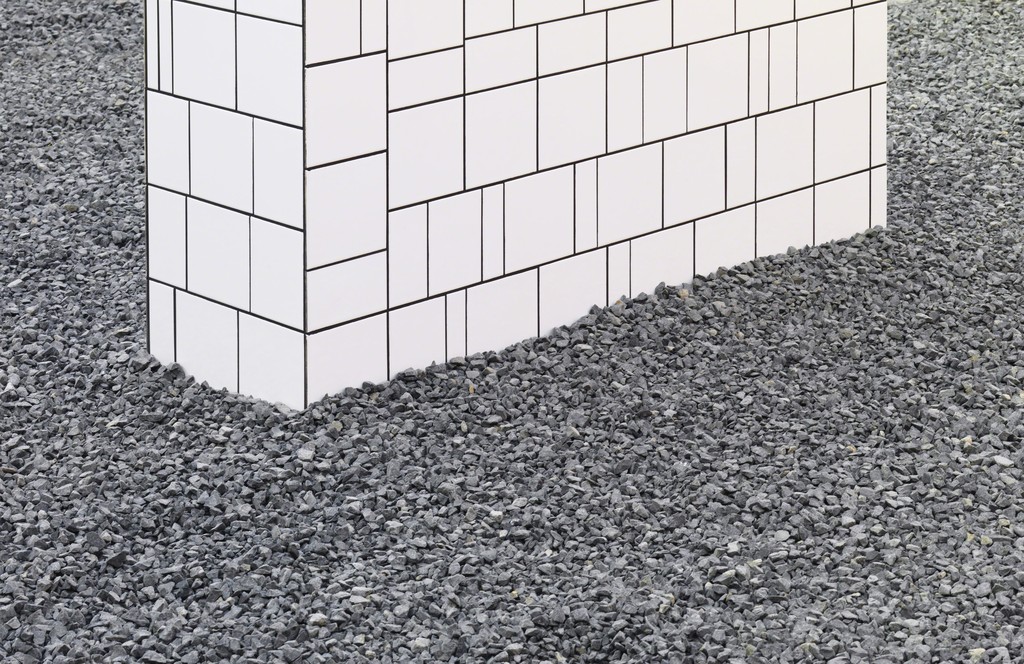 A MONUMENT FOR THE COMMON
by POWER EKROTH

The sculpture “Popularis (A Monument for the Common)” by the artist Simon Mullan will be erect in the courtyard of ABC 2016 for the duration of the fair. In the monument as in his other tile-works (POPULARIS), Mullan uses tiles as a painter would apply paint to a canvas. The process of putting the tiles in order might look carefully planned well ahead, but it comes together rather intuitively. A single tile is his starting point; he cuts it and continues to set the tiles one by one after the first is placed. He takes pride in using every single piece that he cuts up, so the process is a strenuous one. That single first cut is a small gesture that no tile-maker would perform, but it is powerful enough to change the result so much that it creates a harmonious disharmony that rivets the gaze. The final pattern is thus slightly random and also abstract. However, even if there is a certain amount of chance involved in the process, Mullan has enough craftsmanship in his skill-set to be able to get the finished outcome he wants. “Popularis (A Monument for the Common)” will be the perfect setting for a meeting-point to gather by and linger for a while.

The nearly four-meter-tall tiled monolith surely brings to mind a lot of different imagery and connotations. Judging from the looks of it, it might make you think about either an inverted butcher’s room or a bathhouse. Either way, it is a space we know as a “common”. The title also makes us think about what, or who, that might actually entail. These are the spaces and places we own together and co-exist in, spaces that seem to be disappearing in the more private, corporate realm that current times demand. The common place, where we gather to meet, think, and perhaps even exchange words or ideas, is becoming scarcer but also more invisible—just as the “common people” are invisible. Like the dudes in the parking lot, the ones hanging around there all day and half the night, drinking Red Bull, smoking, and occasionally spitting here and there? These fellas are so common that they sort of blend right into their environment and go unnoticed. These spaces and places would be at least some of the contingents of the “common” that Mullan has in mind.