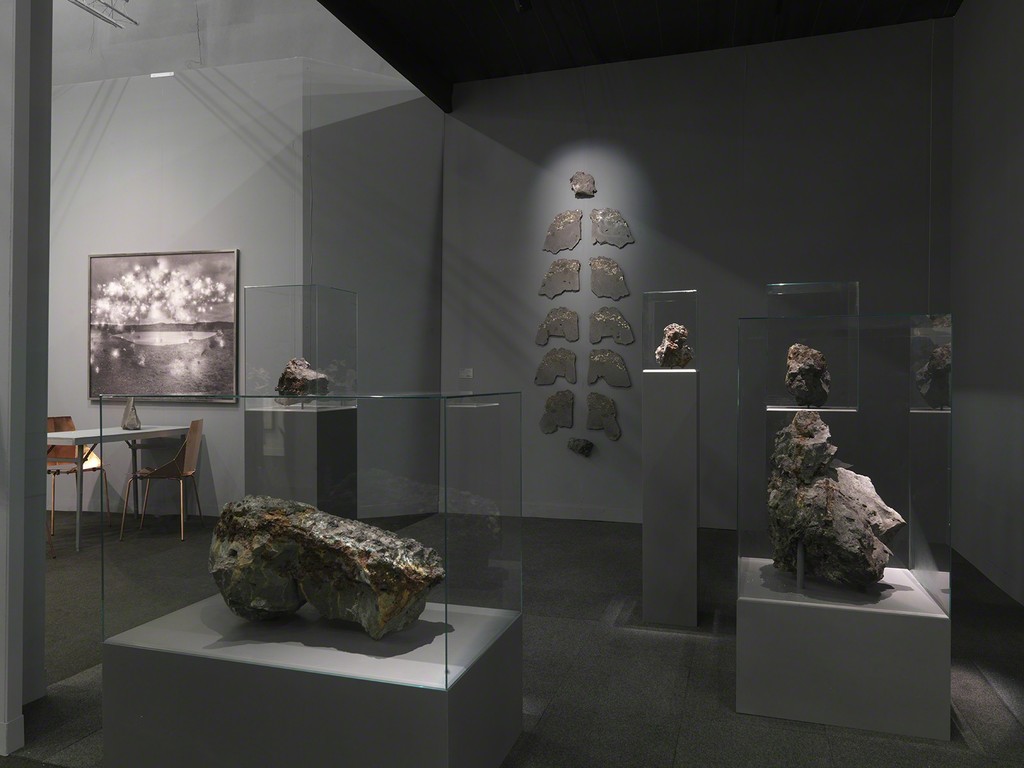 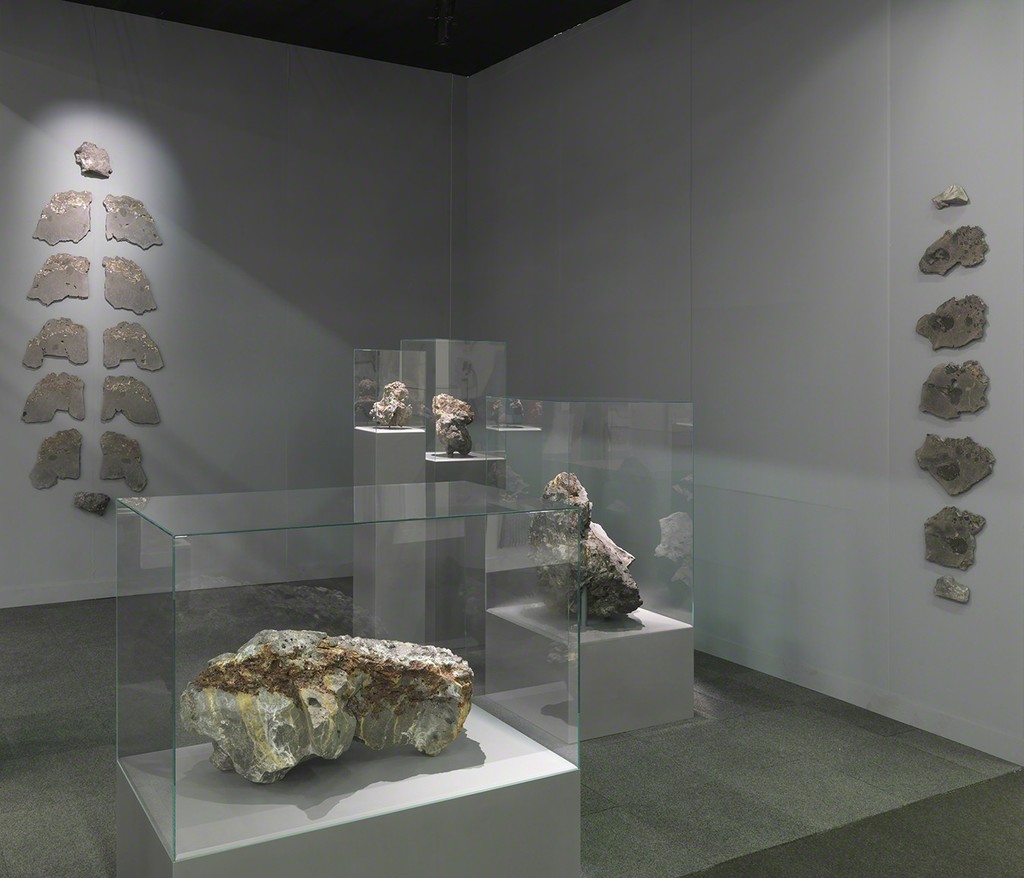 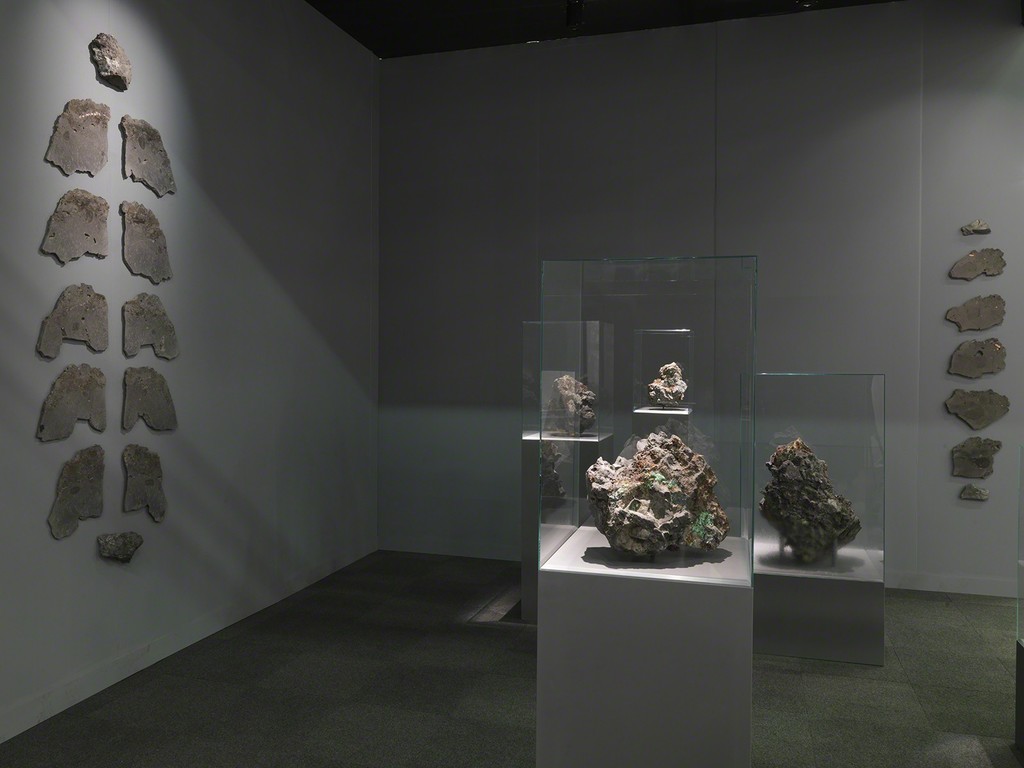 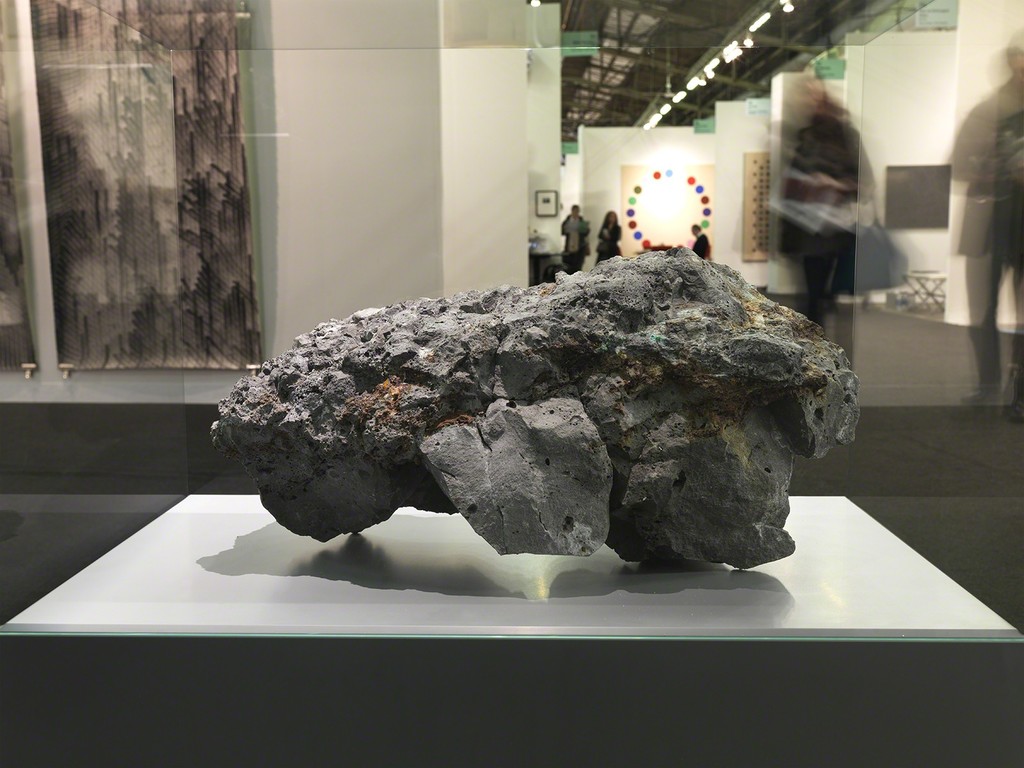 Lars Dittrich and André Schlechtriem are pleased to announce our participation in the ARMORY SHOW 2016, 3 – 6 March 2016, Booth 778 with a solo-presentation of new sculptural works by JULIAN CHARRIÈRE.

Titled Metamorphism, CHARRIÈRE has melted, transmuted and amalgamated current technological gadgets including their stored memory (iPhones, Notebooks, Hard Drives etc.) within molten lava. Through this action he forces a transfer from a digital to a geological strata, in which only the potential of the previous storage powers remains. The melted hybrids of congealed magma and precious metal components of the technological devices are fused and materialized in matt, meteor-like lava stones of different sizes.

At The Armory Show 2016, five of these hybrid stones will be presented as sculptures in vitrines, conserving them as a kind of cultural objects from a future past. The vitrines are accompanied by additional cut and polished slices of these hybrid stones that will define the walls as a shining scenario of staggered geo-hybrids: With Metamorphism, the layers of aluminum, high-grade steel and copper strands gleaming out of the dark frozen magma are aesthetically confronting the highly sensitive, filigree devices, with the pure and raw materiality of the geological strata´s origins.

Charrière reverses the alchemical processes which, often widely unnoticed, have provided the basis of our modern world´s society and, more specifically, what we might call our cultural crystallization. Each computer-component, consisting of strictly geometrically arranged metal particles is to be regarded as a macro-crystal itself. This cultural crystallization (computers, cell phones, hard drives) enables us to connect world-wide. These man-made crystals posses us with a super power: They dissolve territorial borders and expand the limits of our own human body, perhaps enabling us to a kind of God´s eye view.

Through bringing all these metal components together and melting them in an artificially created lava, Charrière re-creates a primal epicenter, making a connection between the very beginnings of our Earth, current processes and a possible future. In his play with future geologies, Charrière constructs an artificial image of a future past, a place where the traces of our civilization will hide among rock.

In addition, Charrière´s Metamorphism encourages us to reflect on the circulation of the materials melted into the stones. We continually dig deeper and deeper holes to extract these rare earth minerals. Conceptually for Charrière, considering both the importance of these holes to our modern civilization and also how the limited access to the materials quarried from these holes separates our civilization constitutes a kind of sculptural negative-image of a Babel-tower. These excavated precious minerals are typically shipped to different countries like India, China or the US, where they are assembled back into the super-crystalline tech devices. As soon as the devices become outdated, they are sent back to places such as China, where they land on giant e-waste sites. At a later future date, the precious minerals will be won out of the dumped devices again and re-enter the circulation process. Charrière interrupts this current recycling flow of the highly processed key components of our contemporary communication world. By prematurely transmuting these delicate devices and melting them back into stone, he initiates a geo-artistic reflection of our digital consume culture as an aesthetic, conceptually refined ‘geo-reset’: back to the future.