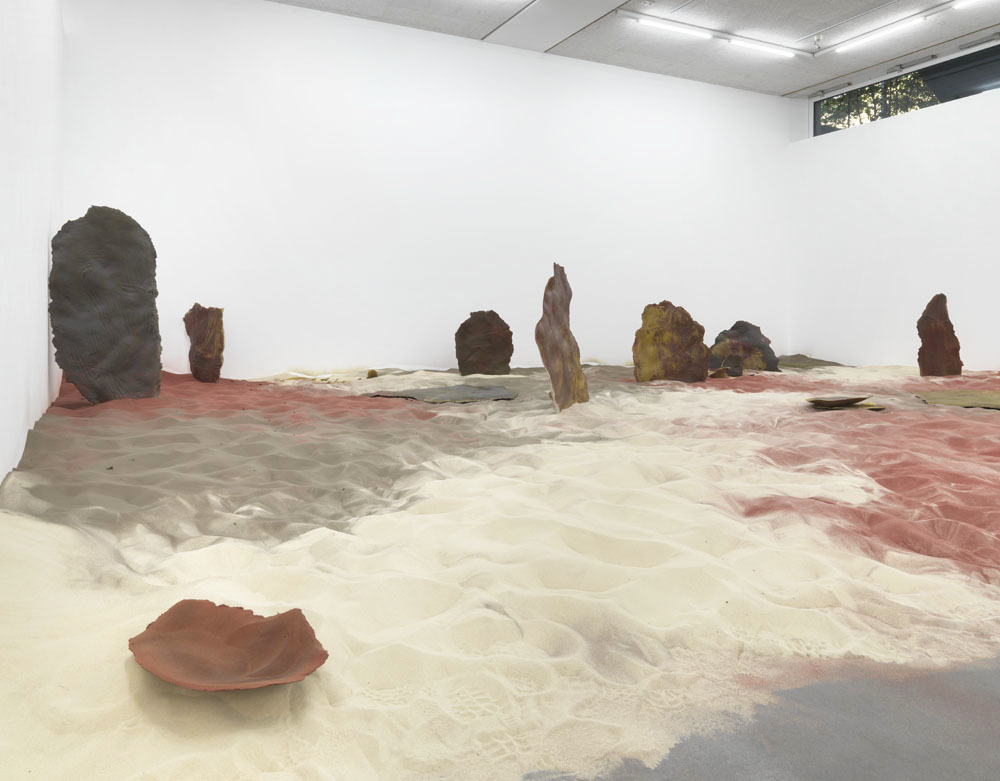 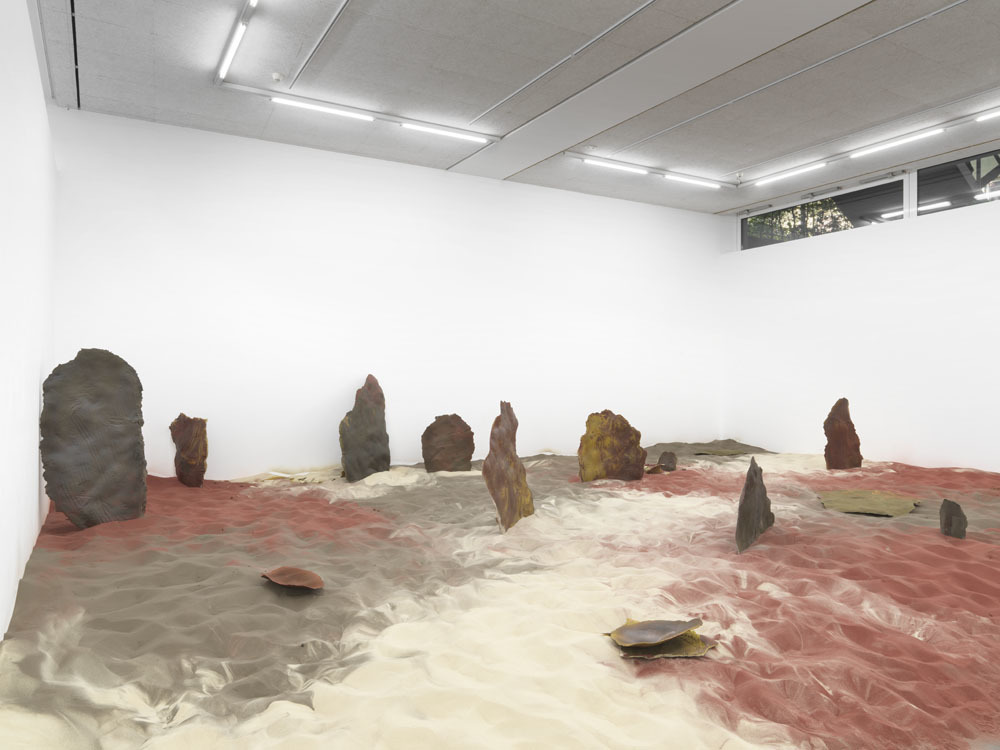 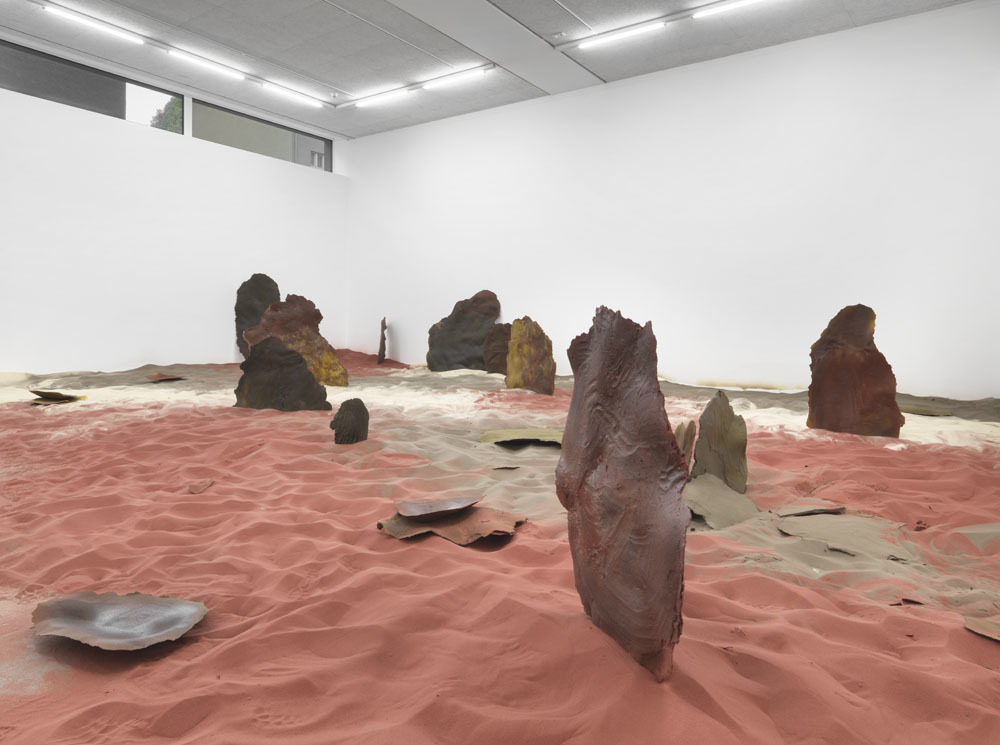 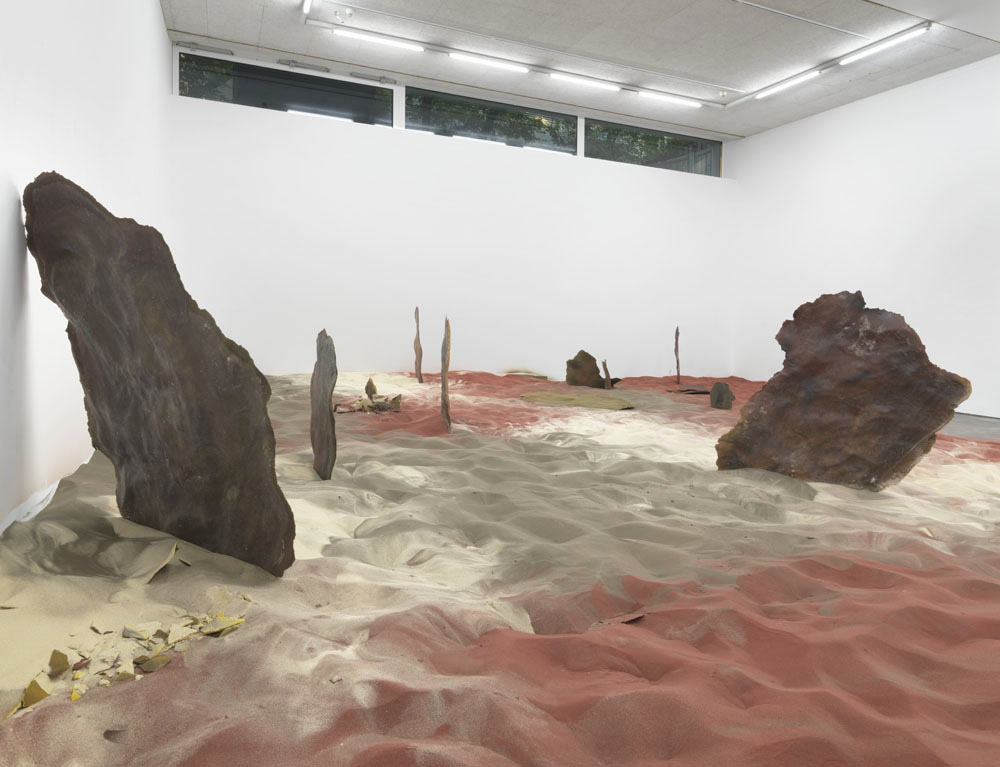 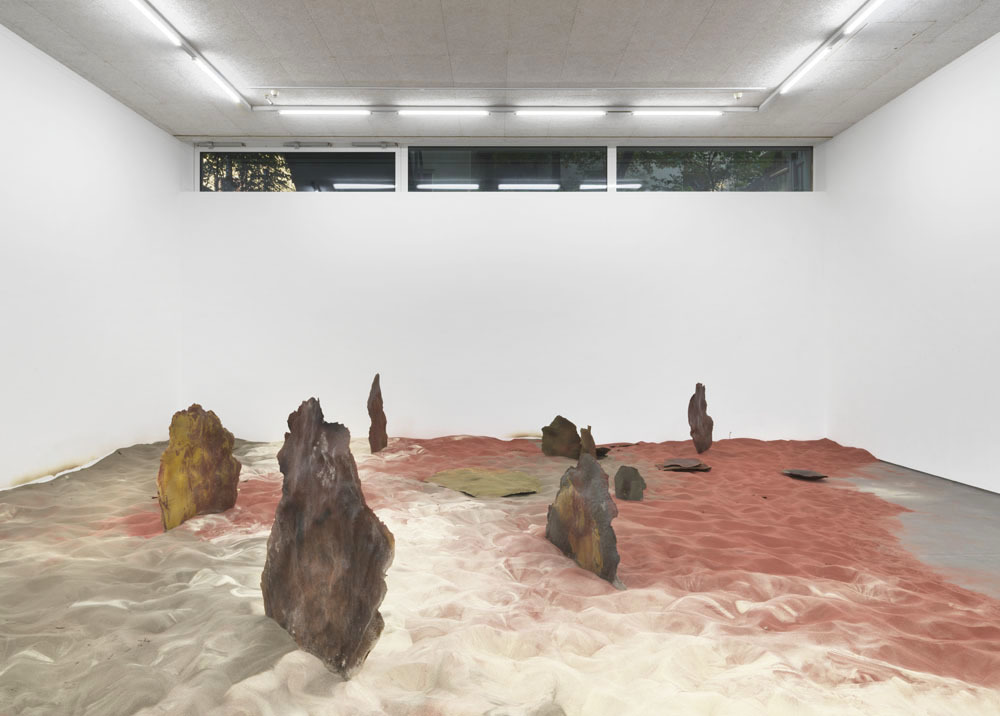 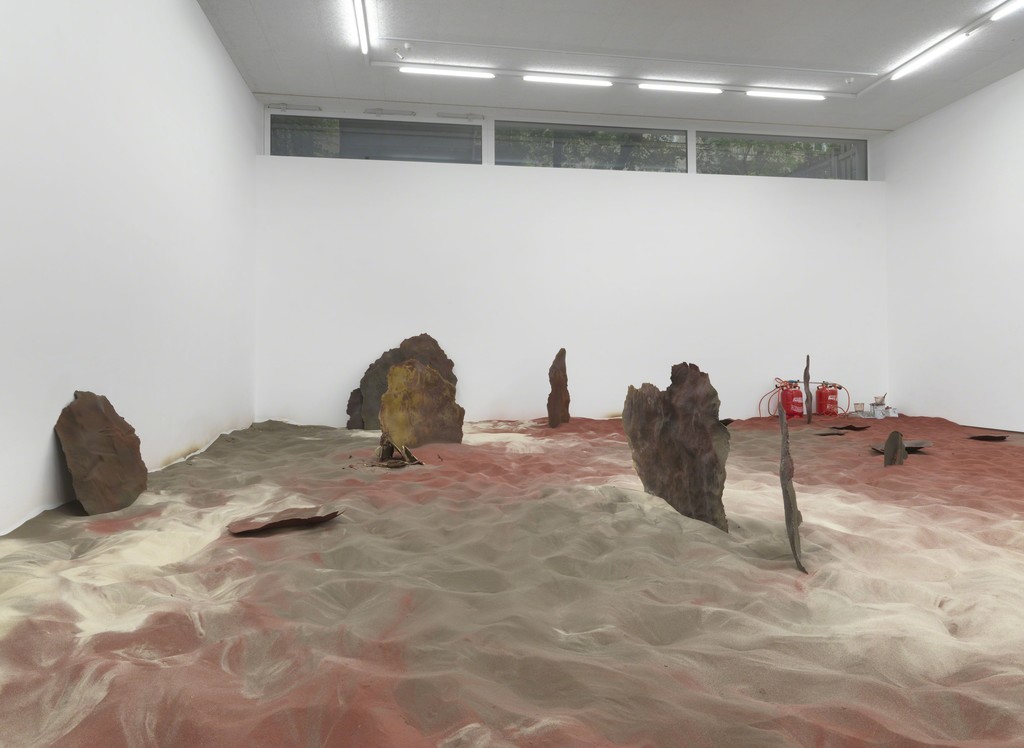 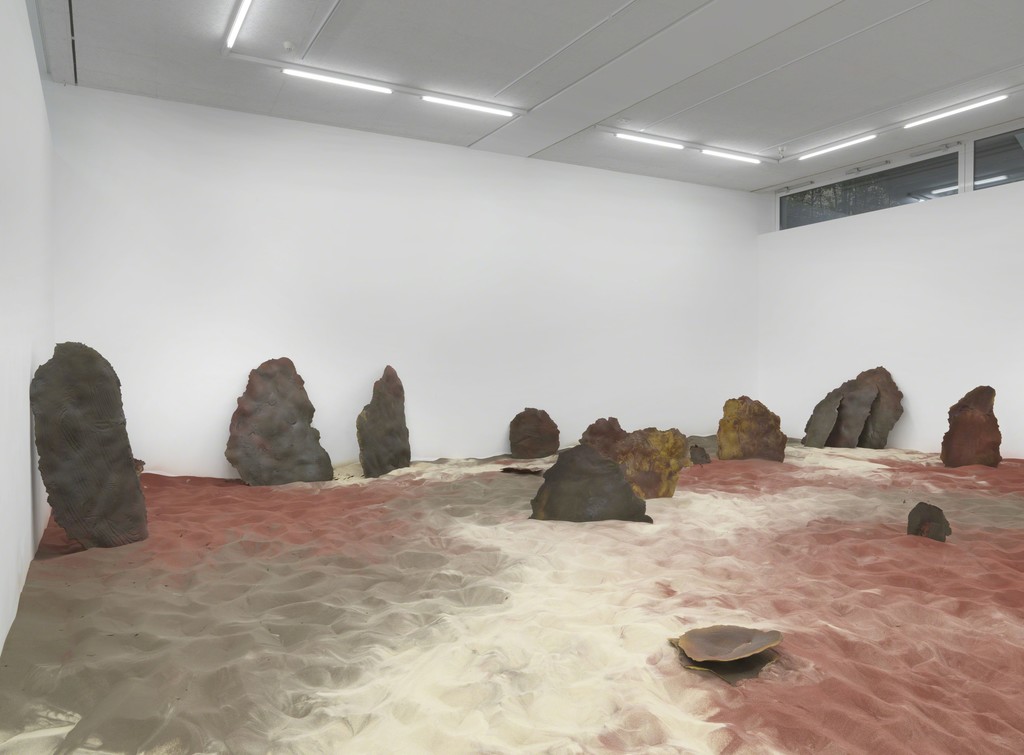 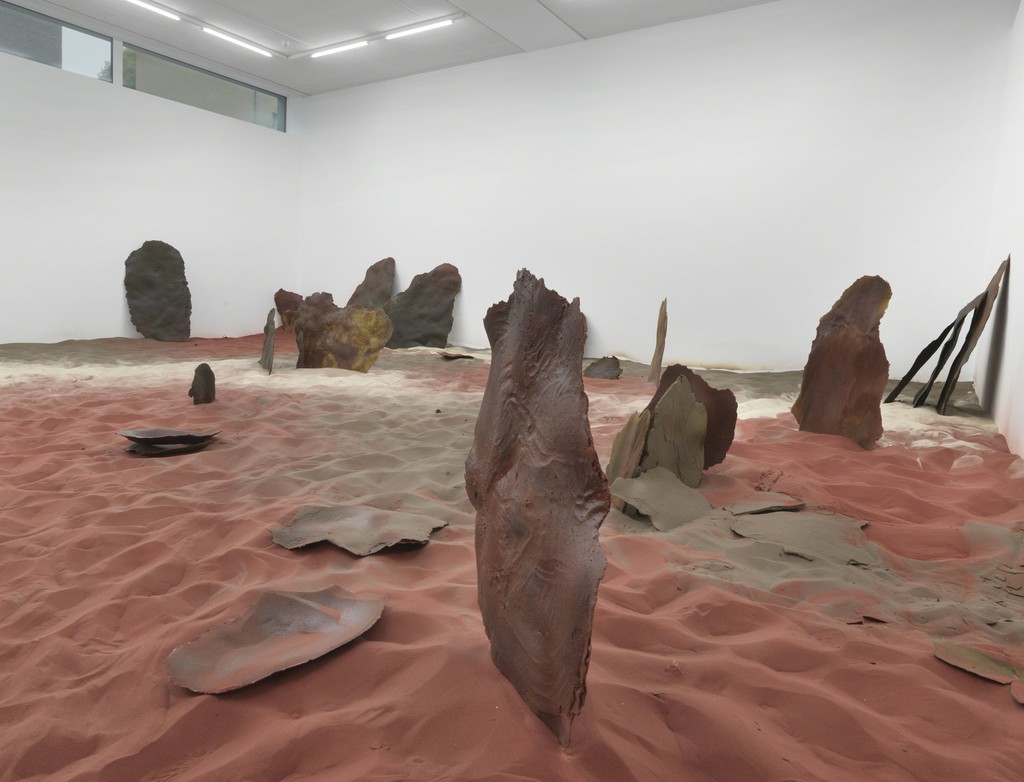 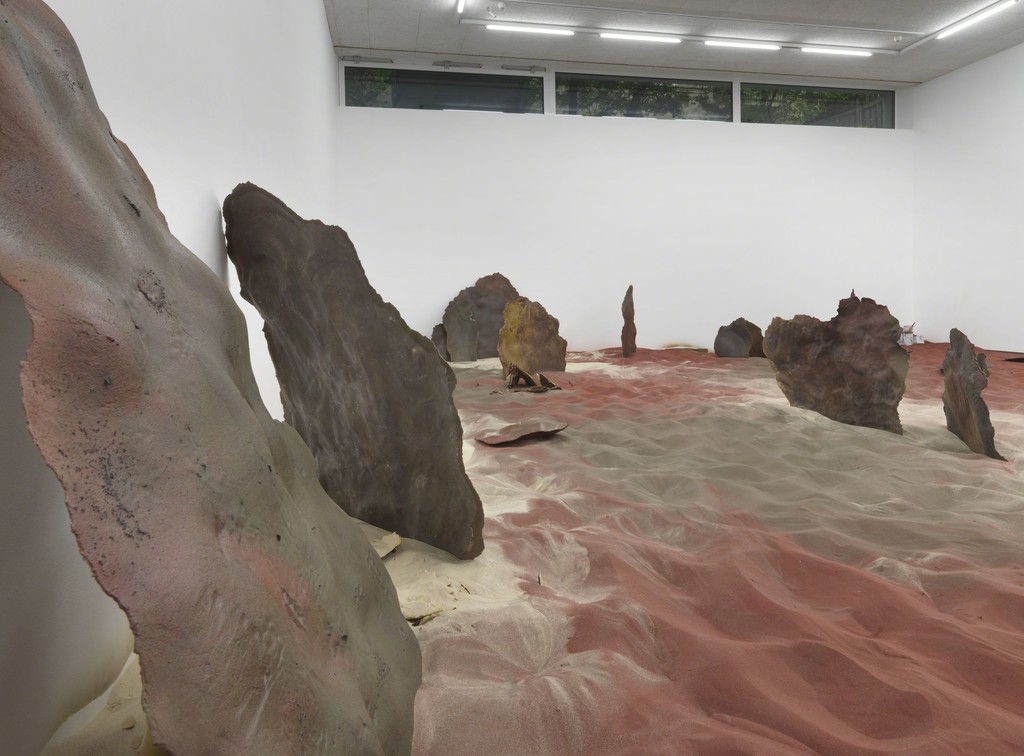 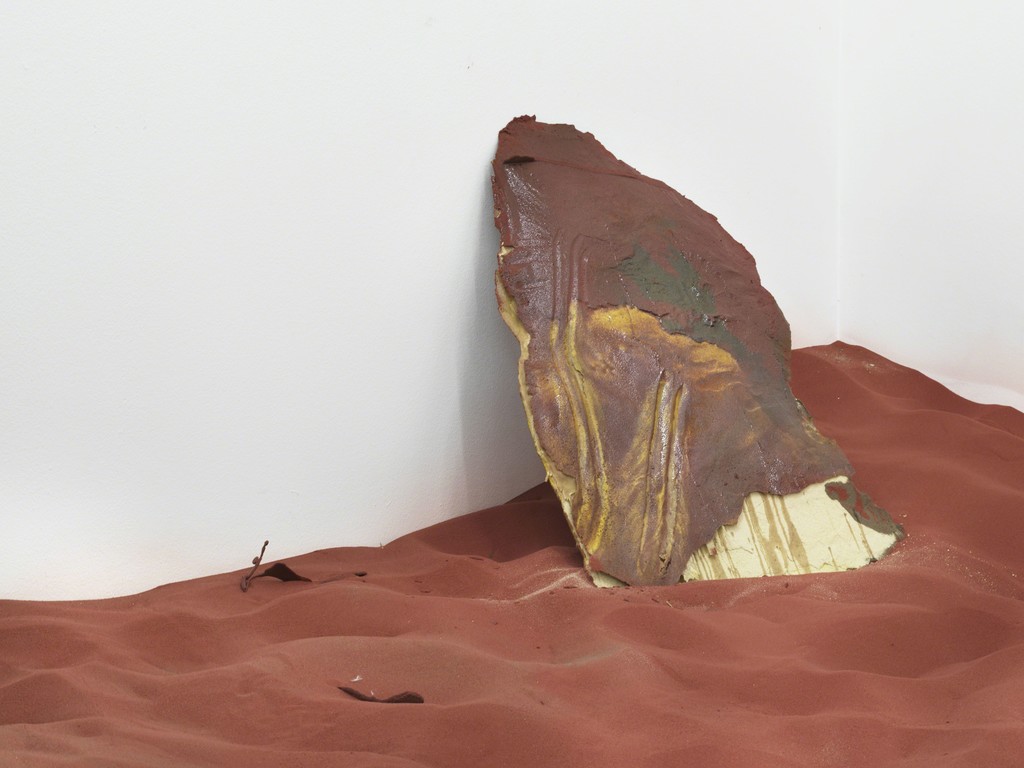 For "Molten", Martini executes a complete sculptural and performative installation, filling the subterranean gallery space with 20 tons of phenolic-coated quartz sand, specifically selected for the distinct way the resin coated material melts and binds together when heated. Within this constructed landscape of dark red and yellow toned sand mounds exist a series of individual sculptures, composed of an artist-manipulated version of the same material. Using heat and epoxy to melt, manipulate, and seal the medium, Martini assemblessculptural “crusts” at various scales thatcontain indentations, footprints, and sand formations documenting the actions of visitors navigating the space over time.

The final “crusts” are then set upright on the sandy floor and repositioned regularly according to the daily schedule of labor. Throughout the course of the exhibition period, Martini continues to manufacture these objects, creating a constantly shifting landscape that offers a different experience for visitors each day.

As evidence of Martini’s ongoing labor, the blowtorch, epoxy supply, and other work equipment remain in the room. Additionally, two new drop-shaped epoxy tank sculptures are mounted on a wall, containing mixtures of demineralized water with either red clay or graphite and metal minerals permanently suspended in a liquid state.

"Navigating “Molten”, one can easily see in which way Martini’s work is inspired by the complex and articulated philosophical structure of Maurizio Ferraris’s “new realism.” (1) Each sculpture reflects his philosophical and material understanding of another realm of perception. Exploring this “new” realm, Martini de-materialises the consistency of the matter he uses, exploiting its chemical properties and deconstructing the forms it is typically used for. In this operation of destructuralisation, Martini’s artistic practice echoes Graham Harman’s materialism. (2) By embracing an object-oriented philosophical approach in his practice, he sheds new light on the nature of materialism."

"Over two months, Martini initiates the metamorphosis of the space, assuming the role of a contemporary Prometheus. Throughout the show, the artist heats up portions of the sand, moulding shapes and forms that he randomly places in the space, designing a casual labyrinth of vertical and horizontal primordial forms. The title of the show, “Molten”, is an archaic Middle English form of the past participle of “melt”, which the artist adopts to refer to the archaic, primordial gesture of melting metal as an operation that points to the beginning of technology. The moment in which thermal sand turns from a solid into a liquid state of an undefined shape is one that is suspended in time, and anticipates change and a possible new understanding of reality. Martini understands fusion as a potential moment in time for matter to enter a cycle of regeneration rather than entropy, and this approach is crucial to his artistic reading of the Anthropocene. The installation, hosted in the underground room, becomes a large, elastic vessel in which the essence of an intellectual principle (in this case, matter materialised in the form of thermal sand) exists at different stages and in different shapes, signifying the different stages of existence and conveying new levels of sensorial and intellectual experience."

The above is an excerpt from "Molten: Matter through Time", an essay contributed by Irene Campolmi that will be contained in the exhibition catalogue available in the gallery in October 2018. For further information on the artist and the works or to requests images please contact Owen Clements, owen(at)dittrich-schlechtriem.com.

Nicola Martini has previously been included in our 2018 group show AS IF WE NEVER SAID GOODBYE, as well IN THE LAND OF THE BLIND THE ONE EYED MAN LOSES SIGHT, curated by Julian Charrière in 2015. Martini has exhibited internationally in New York, Paris, and Milan, and was included in INTUITION at the Palazzo Fortuny in Venice, May 2017.