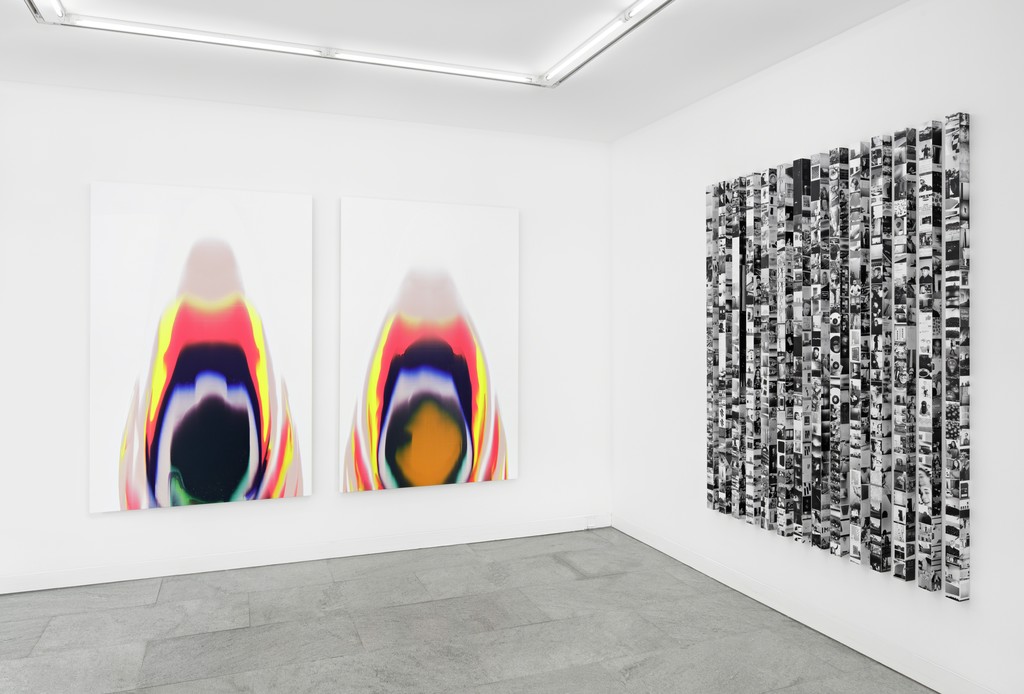 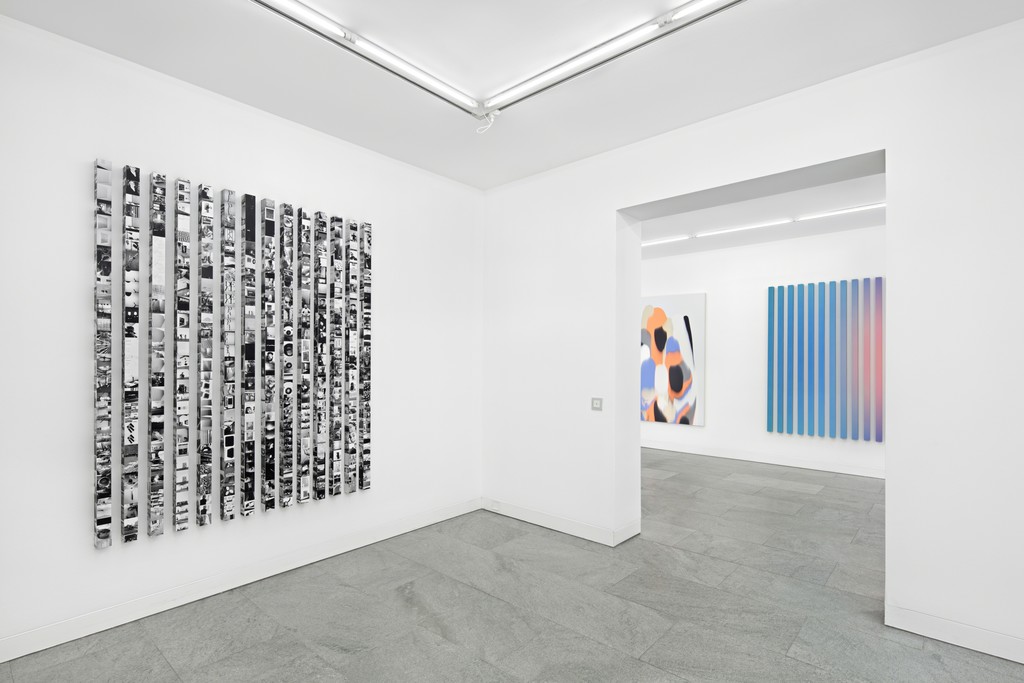 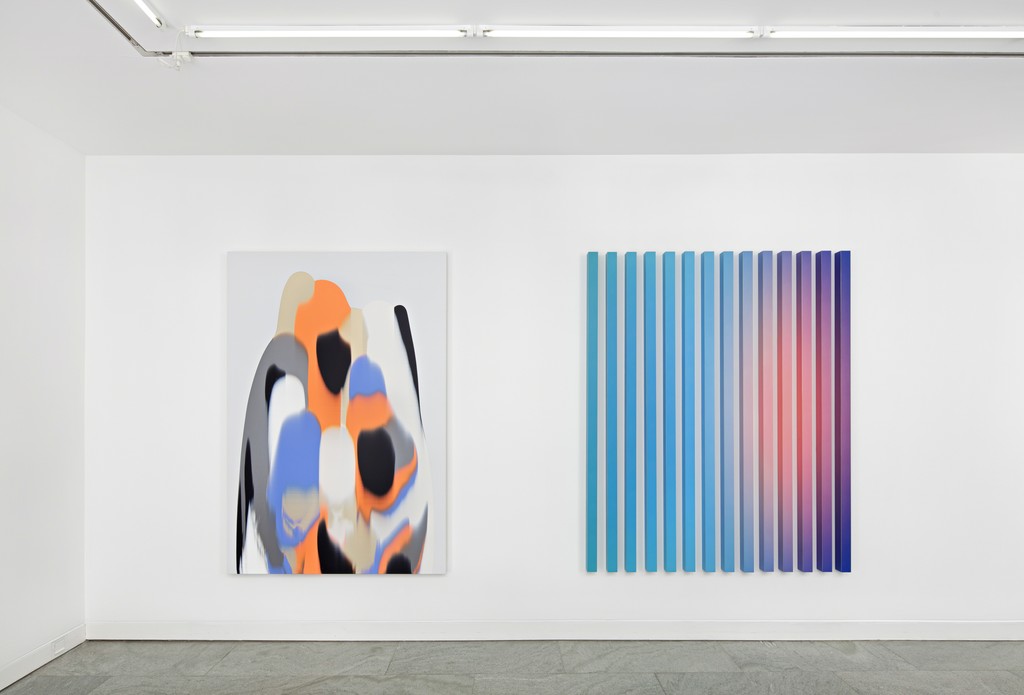 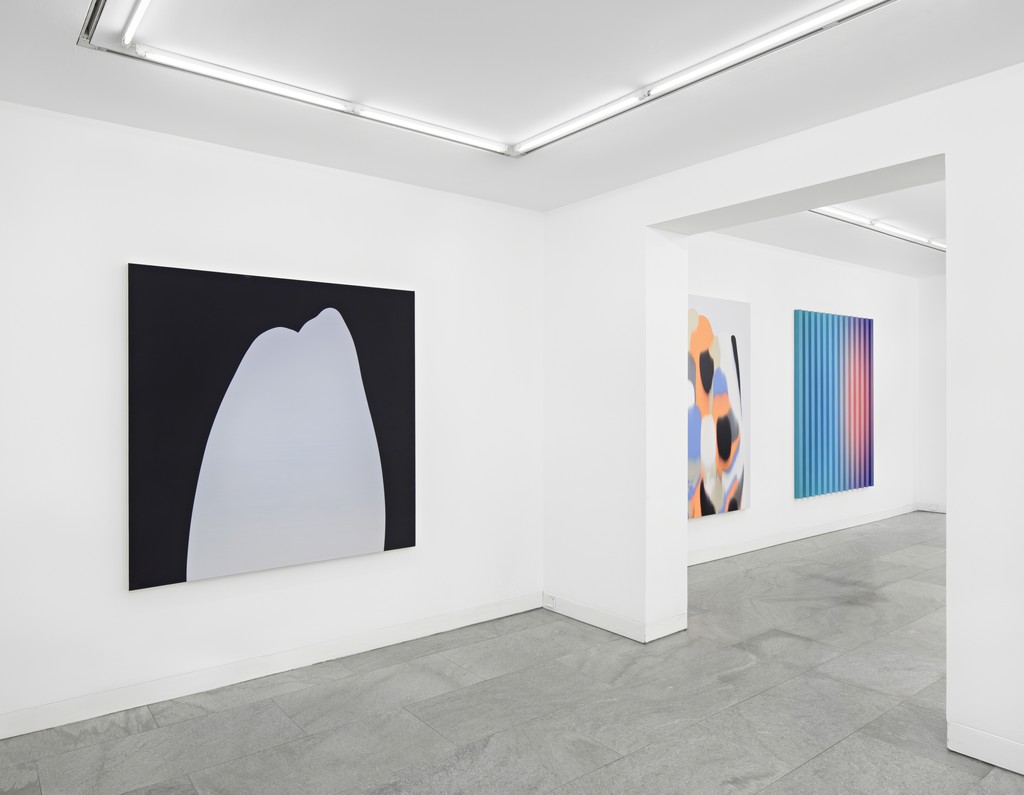 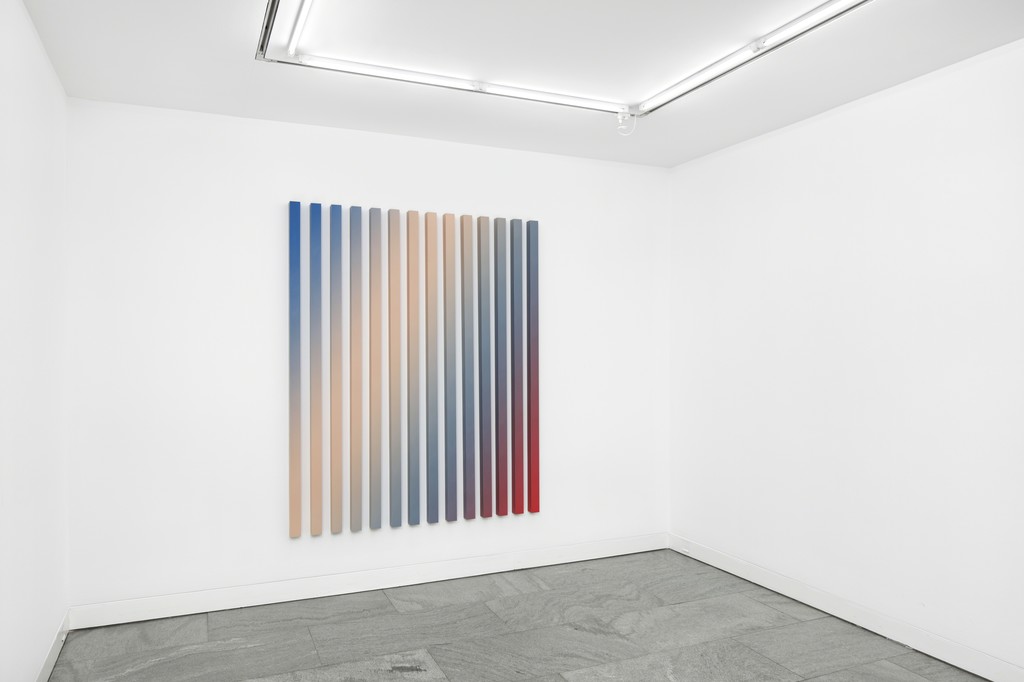 Lars Dittrich and André Schlechtriem are pleased to present GET OUT, an exhibition of works by STEFAN BEHLAU and DENNIS LOESCH. Its core is a set of works from a cycle created for GOOD MORNING, HALLO, a show that was on view at G2 Kunsthalle, Leipzig, in late 2015. Both artists have devised approaches to art-making based on a searching engagement with color as a medium and the reproducibility of images in digital printing techniques. For the pieces on display, they appropriated existing works by other artists as templates. Loesch uses the digital color averages of the extracted calculated from the pixels of photographs; Behlau, by contrast, works by inverting the colors of his sources. The physical quality of paint as a tactile substance spread out on a support medium is central to his works in the exhibition.
“Behlau’s large-format canvases stand in the tradition of American Color Field painting. Negating the painter’s hand while integrating the gestural element, his squeegee covers the surface with a filmy layer of monumental abstraction. The color gradients—the optical effect at first glance suggests a digital origin—are the products of a manual process. Behlau sees paint as intensely physical matter that subtly synthesizes vaguely technological as well as poetic aspects. Immersing himself in his works, the beholder begins to wonder what makes a picture a picture. How does color alone engender spatiality and pictorial depth? So Behlau takes an old credo very much at its word: a picture is paint on canvas.” (Anka Ziefer)
With his evident creative delight in the radicalism of abstract painting, Behlau strips “his compositions of all that is redundant or unnecessarily complicated, and in so doing he has developed a very distinctive and authentic personal style. What would seem to be the simplest and least individual mode of pictorial production—a large mass of paint is spread across a primed canvas with a single sweep of the squeegee—has become, in Stefan Behlau’s hands, a way to make highly precise and poetic works that have a powerful physical presence.
The exhibition shows them in lively dialogue with a contrasting ensemble of works: Dennis Loesch’s inkjet prints on aluminum. In an analogy to recollection, which is fated by its very principle to take the form of flawed repetition, Loesch reproduces images and colors from digital sources and transfers them onto actual physical media. His Memory Sticks are metaphorical visualizations of the concept of the storage medium.” (A.Z.)
For the earlier pieces in the “Memory Sticks” series, Loesch downloaded a collection of pictures onto a single stick, effectively disclosing his digital archive on the (user) interface. In the more recent series, by contrast, “he uses several sticks to present a single high-resolution image, deliberately selecting motifs whose common denominator is arguably their ubiquity: abstract color progressions or gradients either generated directly in Photoshop or derived from screenshots of the Apple screensaver Plasm. For other works, the artist scanned the logos of the German tabloids Bild and Morgenpost, a Playboy pinup, the portrait of Benjamin Franklin that graces the 100 dollar bill, an American Express Centurion Card (aka Black Card), or a cover of the New York-based magazine Artforum, which has emerged as the medium of record in the contemporary Western art world.” (Kito Nedo)
The abstract color progressions bring us full circle back to Stefan Behlau’s work. The chromatic information in the gradients, generated as digital data by a computer program, is converted in the printing process into tactile information: the physical presence of paint on the sticks. The digital passes over into the analog, allowing the chromatic information to become visible as an object in space, just as Behlau’s “paint matter” coats the surface of the canvas, its discreet plasticity drawing attention to questions of visual information and volume.

The excerpts are taken from the essays by Anka Ziefer and Kito Nedo included in the exhibition catalogue GOOD MORNING, HALLO. The book is available at the gallery.