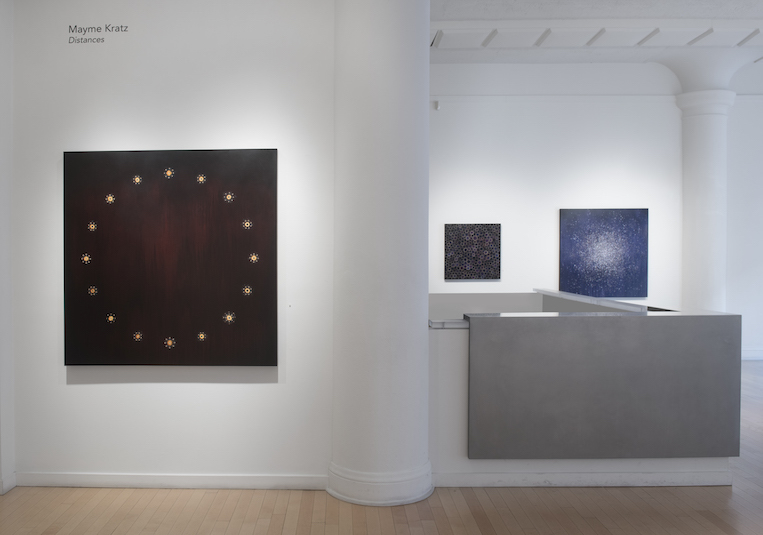 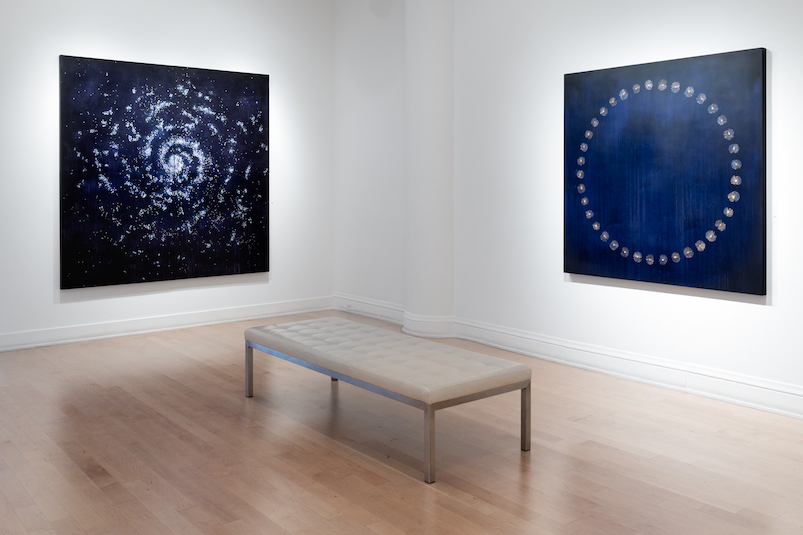 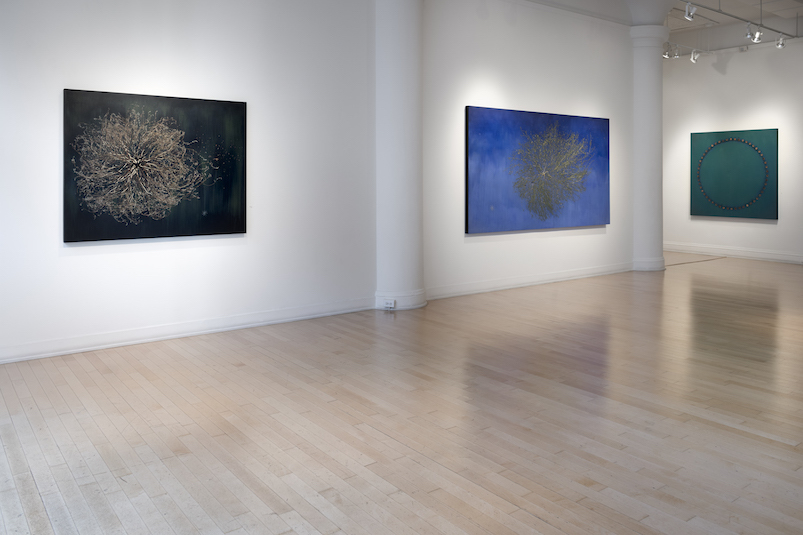 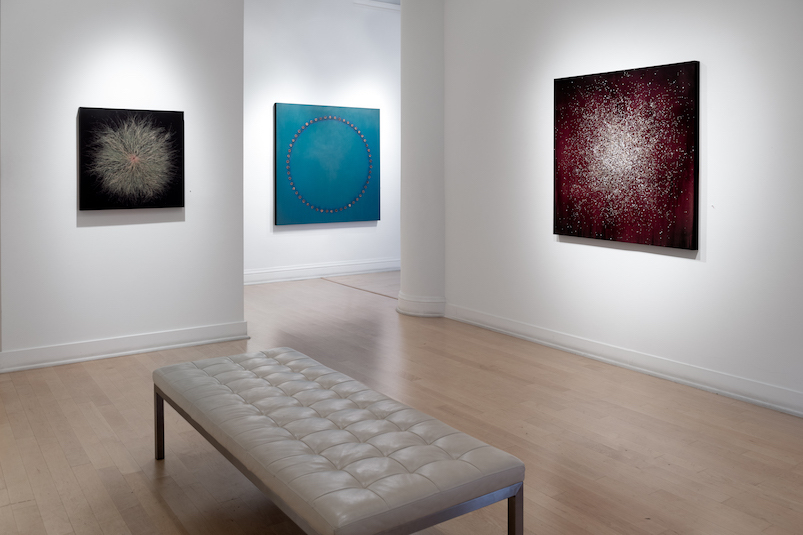 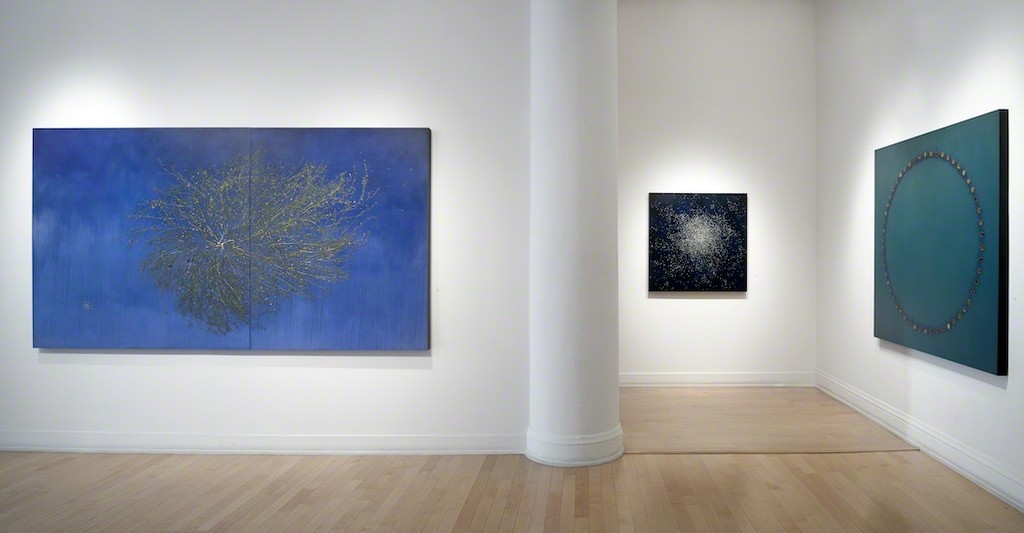 Dolby Chadwick Gallery is pleased to announce “Distances,” an exhibition of new work by Mayme Kratz, on view from December 9, 2017, to January 27, 2018. Kratz’s mixed media works feature elements of the natural world—such as seed pods, pinecones, grass, shells, and rattlesnake ribs—which she encases in layers of polymer resin to create lyrical microcosms of the landscapes from which she draws.

Kratz’s relationship with nature was fomented as a child growing up just east of San Diego on the edge of the Anza-Borrego Desert, where she spent hours playing outside. Finding solace in a wilderness framed by dramatic mountains and brimming with foliage, she developed a reverence for nature—including its smallest of details—that would become part of her personal and aesthetic language.

The artist likens her process to that of creating a visual journal. For example, the materials she collects while hiking become recordings of a specific time and place, such as a weed that she weaves into a nest or a knot. Living near the desert, in Phoenix, Arizona, means Kratz has to look carefully, scanning the dry, exposed earth in what becomes a desperate hunt to discover small, beautiful things. She notes that when she’s out foraging, her response to one leaf or tumbleweed but not another is rooted in pure intuition: “It’s as if it speaks to me, and all of a sudden there’s a relationship. It’s almost immediate.” While there is often a correlation between the arrangement of a given composition and the organic matter it spotlights, this does not occur consciously. Kratz studies her objects under a microscope—a form of close looking that helps inform her process—but the compositions ultimately come together organically, without intensive premeditation. Outside forces also influence the artist’s choices, as evidenced by the ongoing “Circle Dream” series, which began in response to a dream.

Once she has the objects arranged, Kratz secures them to a birch panel before slowly layering in the resin. In addition to coloring the resin and adjusting for opacity, she sometimes paints the panel to give a work a certain tone, a particular depth, or the slight indication of a landscape. After she builds the medium up to the desired thickness, she begins sanding into the exposed objects, opening them up to reveal their as-yet-unknown inner lives and stopping when the surface becomes flush. The objects consequently appear to almost float, as if the viewer is looking down into a shallow pool or up into an evening sky; the colored resin amplifies the effect, collapsing distinctions between the four classical elements: earth, air, water—even fire. In Dust to Dust 2 (2017), for example, desert grasses have been arranged to form a sunburst. Their dry, ochre, and burnt-sienna root structures, which radiate out from the center, convey a heat that underscores the composition’s fiery energy. At the same time, the explosion is frozen within the balance established by the deep blue resin framing, allowing the viewer to zoom in and explore its inner workings.

Kratz explains that part of her job is to bring beauty into the world and share it with others, which she does by calling attention to the small and exquisite yet often overlooked moments that unfold all around us, all the time. In a poem by Philippe Jaccottet—also titled “Distances”—which marvels at earth’s expansive beauty and capacity to nourish, there is a line that reads: “We live in a world of motion and distance.” While these words could be read in any number of ways, Kratz points to a collective forgetting of our place in the natural world, the result of moving through time too quickly or of having lost touch with what lies at the core of the human experience. Two separate worlds consequently emerge: one of man-made events that is defined by tension and stress, and one that exists at a deeper level and from which life opens out. This often unseen and unfelt layer is the one with which Kratz seeks to forge a connection: by moving deeper into nature and confronting the sublime, even at the smallest of scales, we “reach deeper into life, to the poetry of existence.”

Mayme Kratz was born in 1958, in San Diego County, and has lived in Phoenix, Arizona, since 1986. She has been the subject of solo exhibitions at the Phoenix Art Museum, Tucson Museum of Art, and Museum of Glass in Tacoma, Washington. In addition to being granted residencies as part of the Art in Embassies Program, at the Museum of Glass in Tacoma, and at the Pilchuck Glass School, she was also awarded a mid-career prize and exhibition at the Phoenix Art Museum. Kratz’s work is held in public and private collections throughout the United States.