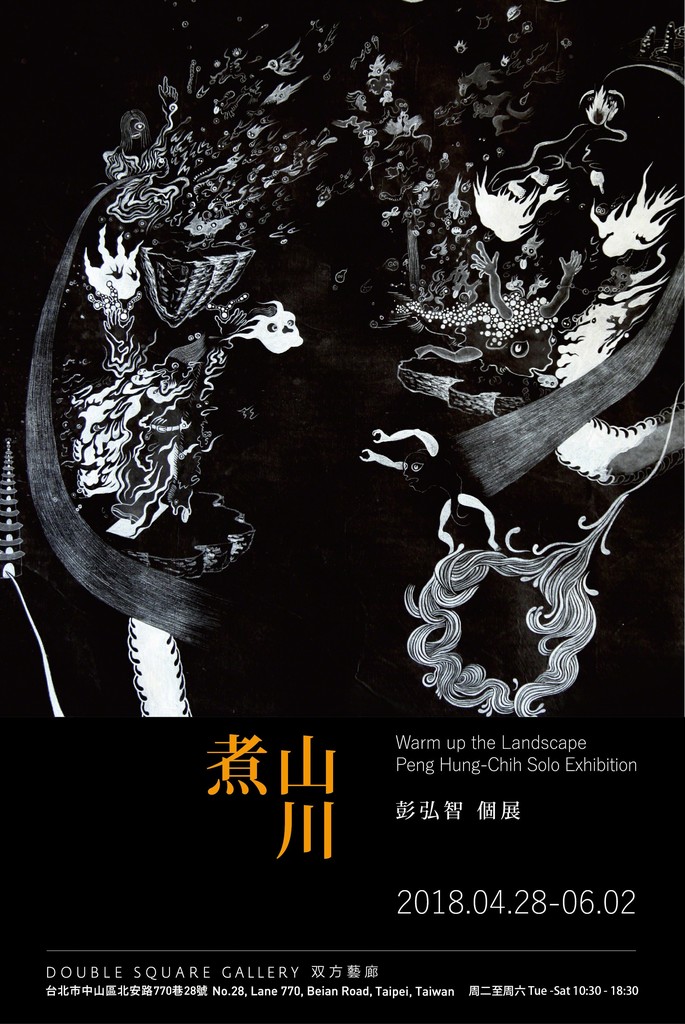 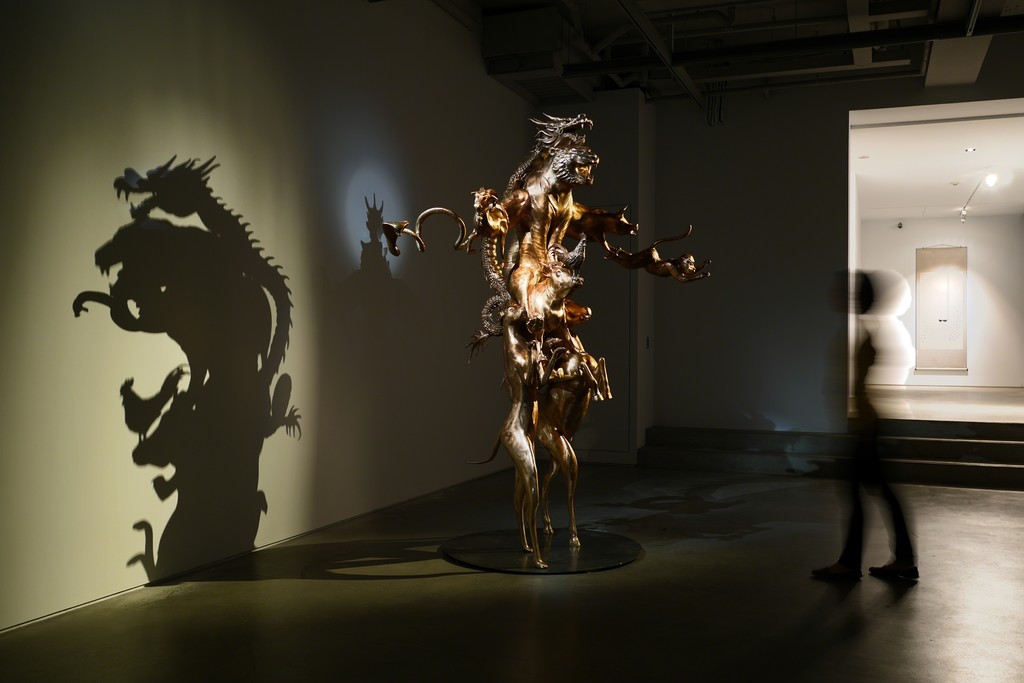 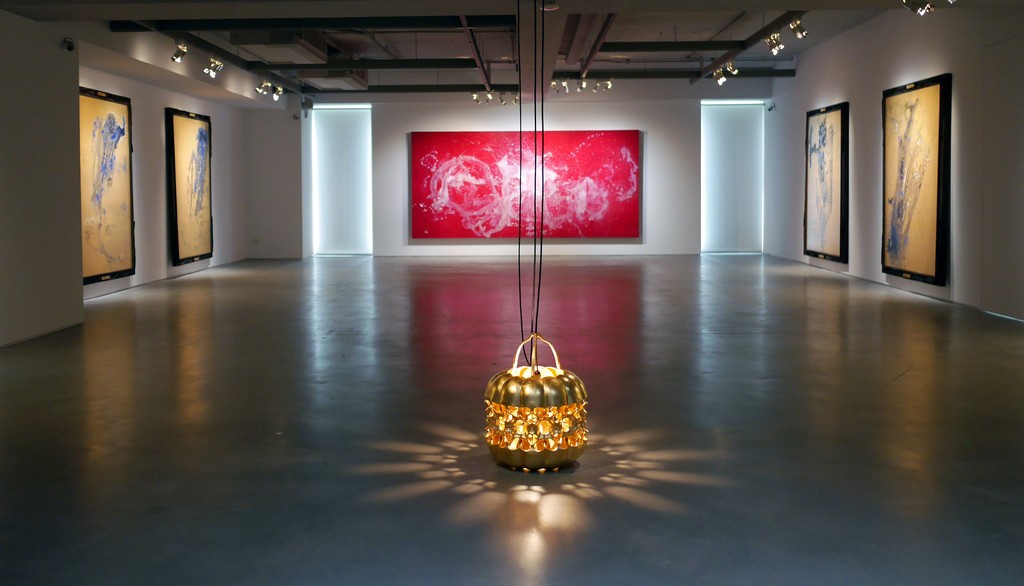 Exhibition view on the second floor

Double Square Gallery is delighted to present a solo exhibition by Peng Hung-Chih, entitled Warm up the Landscape, on April 28, 2018. Peng was the winner of the Visual Arts Award of the 5th Taishin Arts Award, and has been active in international biennials, recognized for his installation, video and sculptural creations in the global art scene. He excels in mixing different media to incorporate and explore issues about art, society, religion and humanity. In this solo exhibition, the artist shifts his focus from the outer society and takes an introspective examination of the inner self, using the classic Taoist text “Inner Scripture” to demonstrate his contemplation on Taoism and the process of practicing self-refinement. The artworks featured in this exhibition are all shown for the first time. Audiences can view the Post-Inner Scripture series from its earliest work to the latest painting all in one visit. The artist also utilizes 3D printing technology and casting technique to create two large-scale metal sculptures, respectively entitled “Transformation into Dragon and Phoenix” and “Microcosmic Orbit”, which delineate the momentum and dynamics in space through rhythmic and transforming physical contours, reminding viewers of the movement and operation of the meridian system as well as qi and blood in the human body. From this exhibition, audience can observe how the artist has reconstructed Eastern and Western artistic languages and formed a highly individualistic aesthetic style by incorporating modern technology and his understanding and learning of traditional culture.

The exhibition title is inspired by a couplet recorded on the stone rubbing of “Inner Scripture” from White Cloud Temple in Beijing, which reads “seeing the world in a tiny grain, warm up the landscape with a half-full cauldron.” This rubbing has ever since become the starting point of Peng’s exploration of the inner world, through which he represents the process in sixteen connected works, entitled “The Variation of the Inner-Scripture”. Together, they comprehensively reveal his self-contemplation on “Inner Scripture” at the beginning and his unfettered variations resulting from his understanding, which have paved the way for the Post-Inner Scripture series that people are familiar with. These paintings are created with features of action painting, automatic drawing, ink wash rendering of Chinese ink painting and traditional claborate-style painting, all of which the artist has combined to interpret dynamic momentum. The latest work in the Post-Inner Scripture series is “The 24 Forms of Tai Chi.” To create the work, Peng stood in paint with a large brush in his hand while doing various moves of Tai Chi. He first used rendering techniques to create shades of colors and visual layers; then, he applied the techniques of claborate-style painting to depict the countless tiny lives on the canvas, creating a work informed with a sense of corporeality and posited between abstract and concrete expression.

Conceptual transfigurations and multi-layered forms can also be observed in Peng’s large-scale sculptures. In “Transformation into Dragon and Phoenix”, he uses 3D printing to create the twisting, changing human skeleton that resembles a pair of flying dragon and phoenix. The imagery of dragon and phoenix is a characteristic spiritual symbol in the East as people hope their children can grow up to have a bright future of success; furthermore, Taoists believe that human beings can obtain immortality through practicing “waidan” and “neidan” (external and internal alchemy), which reflect how the concept of body in Chinese culture differs from that of other cultures. “Microcosmic Orbit” continues the concept of “Inner Scripture,” and portrays the cycle of the conception and governing vessels in the body. Meanwhile, the cycle is also a representation of twelve years; therefore, the artist gathers the characteristics of the twelve animals in the Chinese zodiac and creates the perfect human body that transcends the limit of time and space.

Born in Taipei, Peng Hung-Chi graduated from the San Francisco Art Institute with an M.F.A in 1997. Specializing in painting, installation, video and sculpture, Peng’s work investigates cultural phenomena in contemporary society and demonstrates profound reflection on historical texts, displaying his observations of this world and our society. Peng has held multiple solo exhibitions in Europe, the US and Asia, such as the exhibitions at the O.K Center for Contemporary Art in Austria in 2002 and Musée Guimet in Paris in 2009; and he has been awarded the Visual Arts Award of the 5th Taishin Arts Award for his solo exhibition, Beware of GOD. Peng’s works have been extensively shown in major art exhibitions and international biennials in Taiwan and abroad, including the Gwangju Biennale in Korea (2002), the Fukuoka Triennale in Japan (2002), the International Istanbul Biennial in Turkey (2007), In Between - Asian Video Art Weekend at Mori Art Museum in Tokyo (2008), the Taipei Biennial (2014), the Busan Biennale (2016). Many of his works have been included in the collections of prestigious art museums, among which are the National Taiwan Museum of Fine Arts, Taipei Fine Arts Museum, Kaohsiung Museum of Fine Arts, Fukuoka Asian Art Museum, White Rabbit Gallery in Australia, etc.