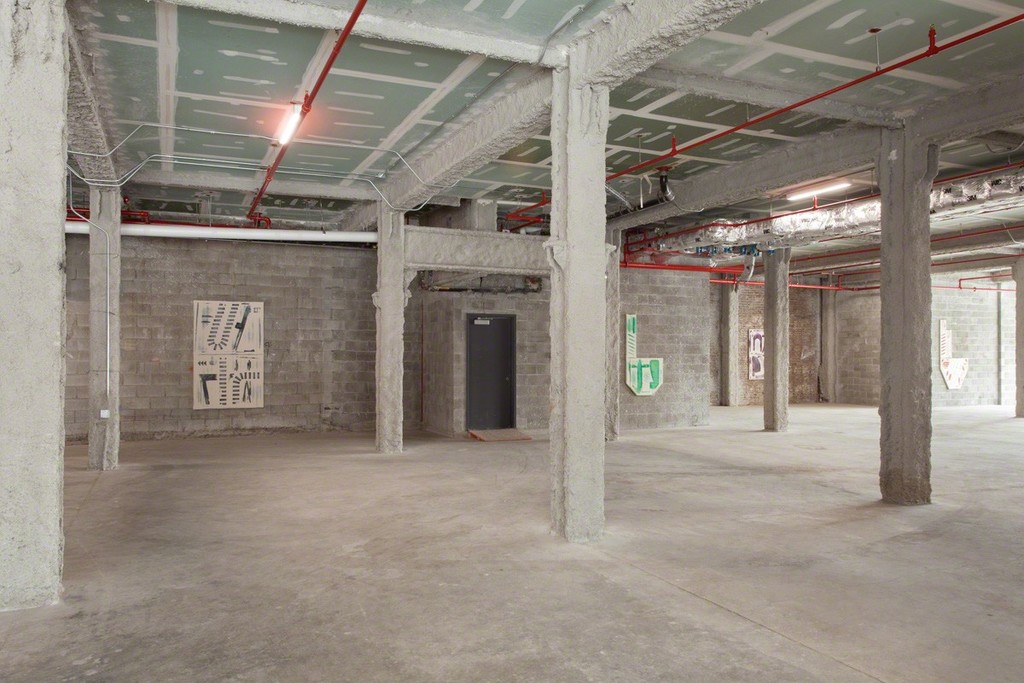 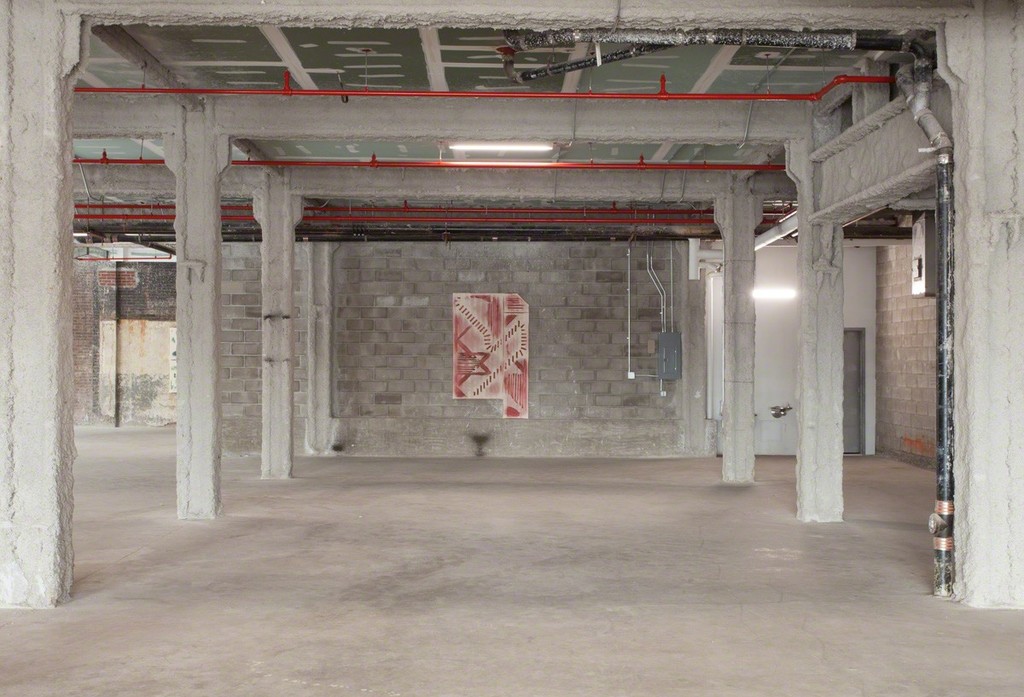 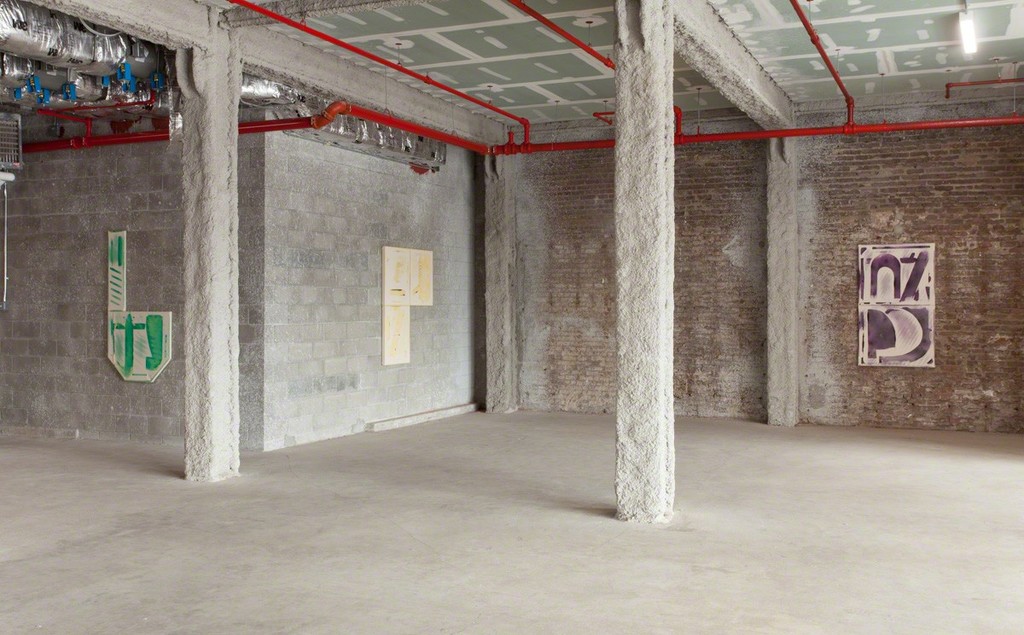 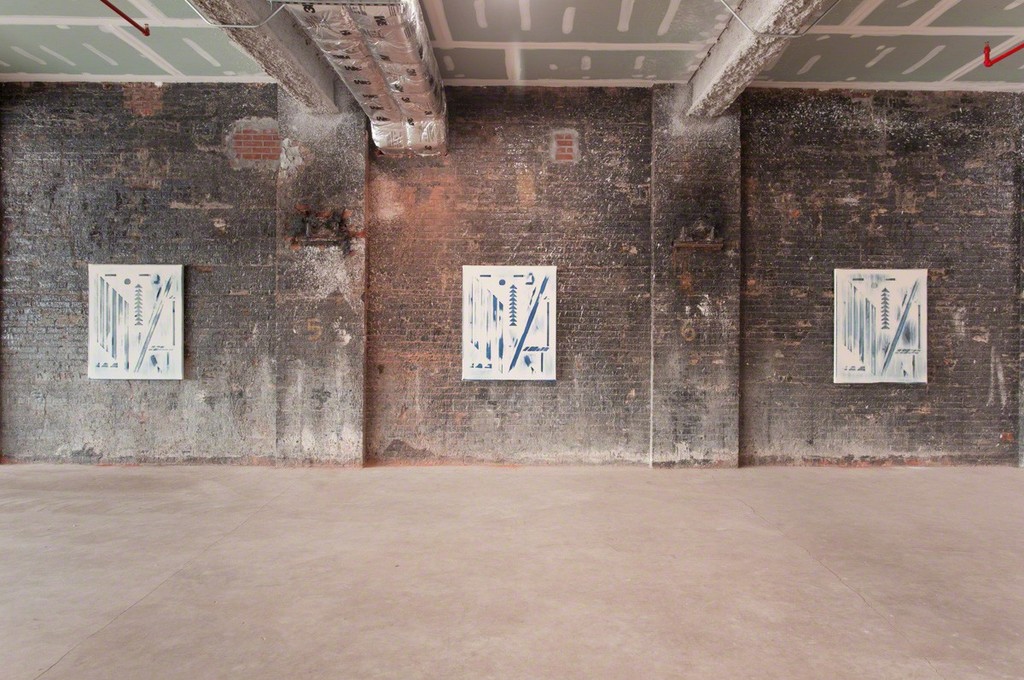 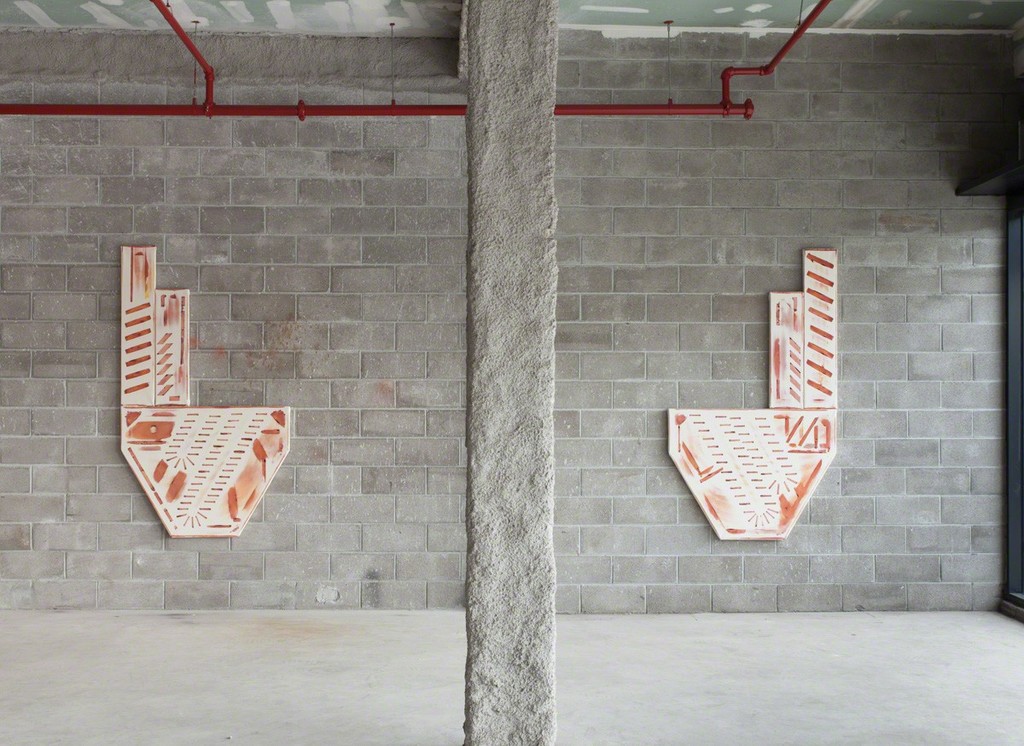 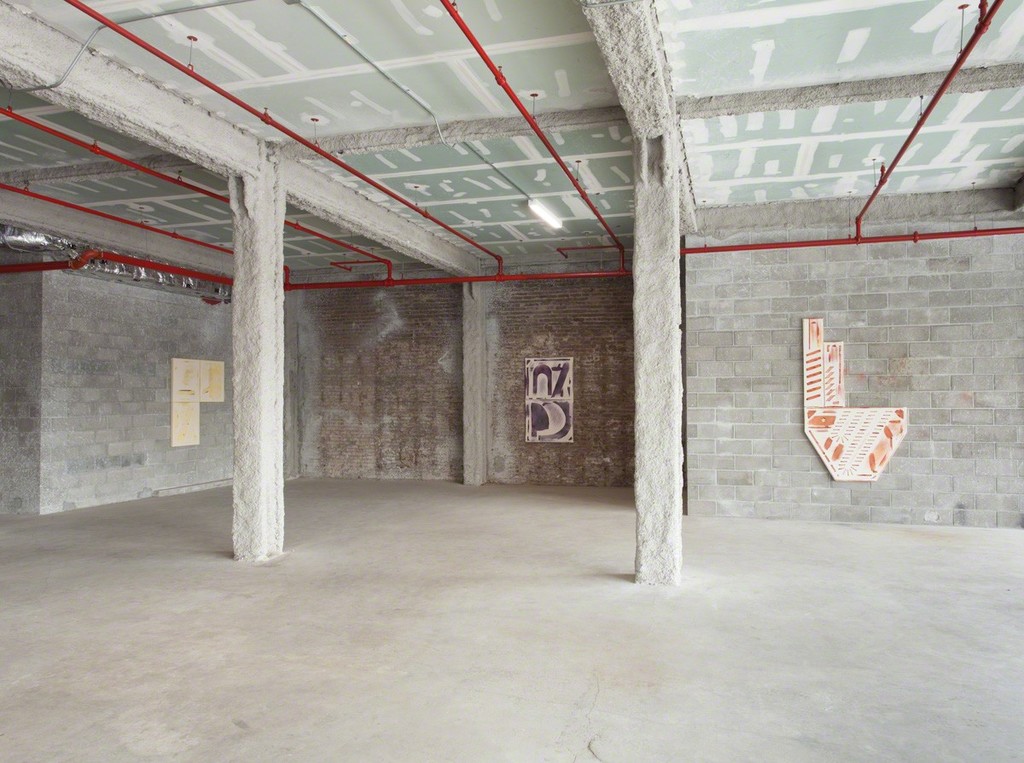 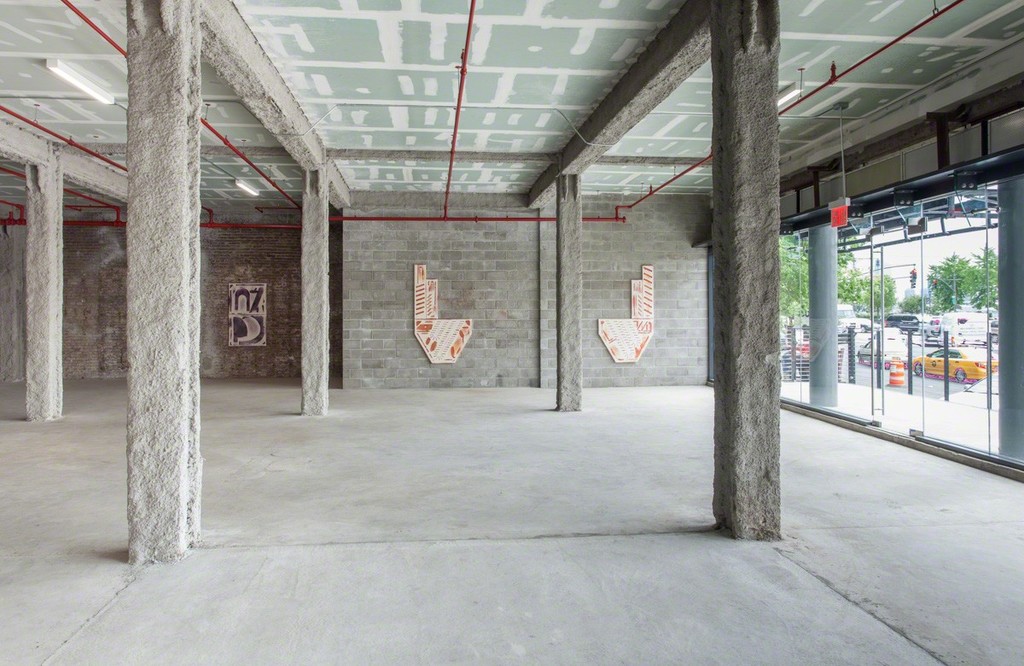 DUTTON is thrilled to announce a solo exhibition of work by Brooklyn artist Samuel T Adams. Making reference to novelist William Gaddis – who lived a block away – and his final formative
writing Agapē Agape – Adams' works are shown in a raw, partially dilapidated space formerly used for meatpacking – some installed on walls with decades of calcified built-up meat fat splatters.
Adams' hypnotic multi-paneled paintings are sculpted surfaces that possess a myriad of histories and evolutions – a singular lexicon all his own. These apparitions simultaneously evoke hieroglyphs; blueprints; topographical landscapes; personified icons; accidental oversized emoticons; and primitive stencils. Breaking through process painting which is – overturned – partly the content itself, his works lend themselves to layers of charged meaning – cacophonous and restrained at the same time, bristling, humorous, and lively, complicated contortions that at times faintly speak of outlands and the last vestiges of machinery and industry.
Adams begins each work as a sculptor. Hidden on the inside and on the verso of each canvas is an intricate constellation, template, or architectural interface of wooden forms, hardware, and raised surfaces that he builds. These comprise the inner workings of each painting, an inky letterpress or insides of a piano or organ come to mind. This notion of eventual reversal is crucial and riffs on Adams' intensive background in printmaking and etching – especially the notion of acid biting into a copper plate – destruction as way of image.
A torrent of labor-laden process follows – physical and innately performative. Adams stretches and wet- sands the painting a copious number of times – saturating each work with several buckets of water infused with paint. Due to the constant friction and enormous pressure exerted, the paint pools around the sculptures and eventually seeps through the back of the canvas, making marks and at times causing rips and tears. Stripped back and re-stretched inside out, the surface of the works are revealed with a carborundum tint as the grit from the sandpaper embeds itself into the canvas during wet-sanding and mixes with pigment – giving each work a slight metallic shimmer.
Agapē Agape, a monologue delivered from a cantankerous dying artist on the brink of madness, is Gaddis' last scream, his outrage of cultural deterioration via the artistic invention of the player piano – technology replacing the artist – yet, he offers hope, as the narrator ardently proclaims, that artistic courage is the only means to unconditional love and transcendence, or "agapē." Viewed outside white walls on coarse concrete and meat fat, a block away from where Gaddis worked, across from the shimmering submarine of the grand Whitney, in one of the last vestiges of undeveloped space in this city, Adams' presentation is an homage to Gaddis himself, and a fervent portrait of Adams' unrelenting artistic practice.
Samuel T Adams received his MFA from School of Visual Arts in New York in 2009. His work has been included in numerous recent group exhibitions, including shows at Fitzroy Gallery, New York; ZieherSmith, New York; Regina Rex, New York; and Contemporary Arts Center, Cincinnati. Recent press includes pieces in Hyperallergic; Artinfo; and The L Magazine. Adams lives and works in Brooklyn.
A catalogue accompanies the exhibition entitled "Notes on Samuel T Adams and William Gaddis", Annotations by Scott Zieher.