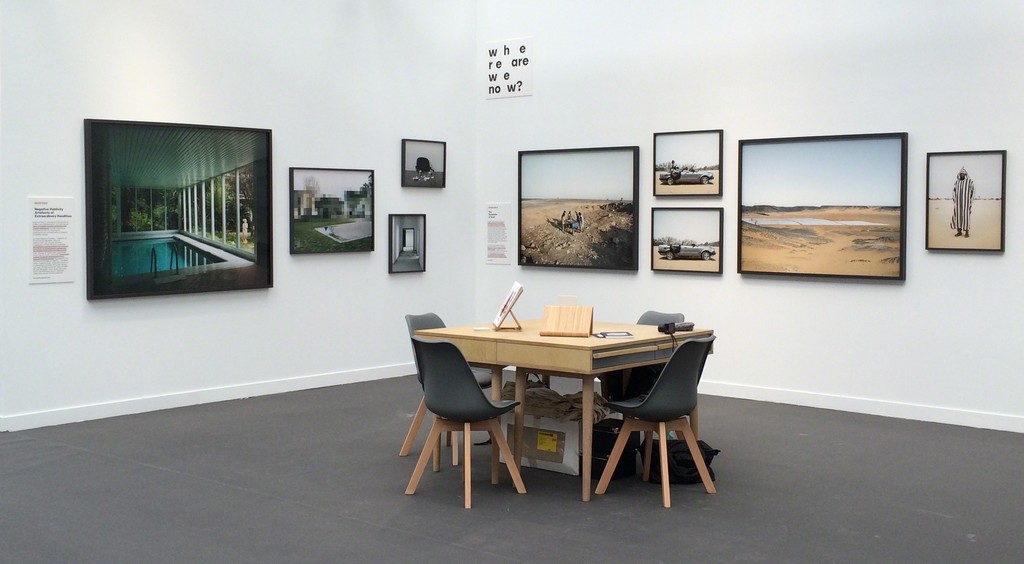 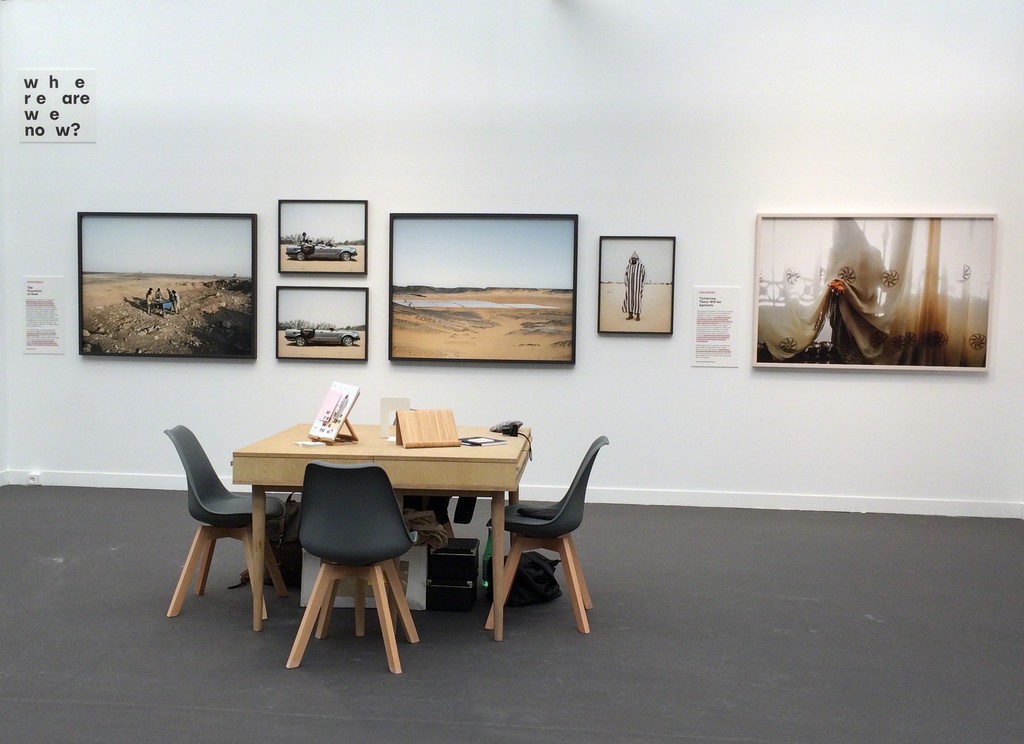 Where Are We Now? East Wing at Paris Photo 2016 (works by Philippe Dudouit and Tanya Habjouqa shown here) 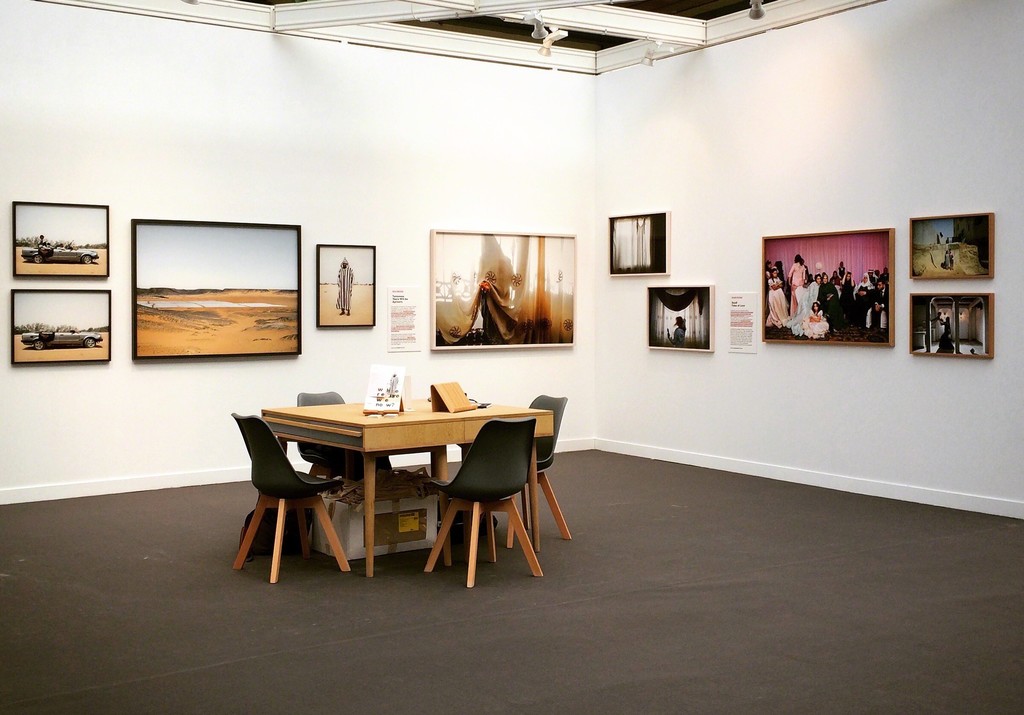 Where Are We Now? East Wing at Paris Photo 2016 - (works by Philppe Dudouit, Tanya Habjouqa and Tasneem Alsultan shown here)

To say that the changes in photography over the last 20 years have been phenomenal would be an understatement. The way the public now engages with imagery; creating, collecting and sharing at an unfathomable rate are concepts far beyond what we could have imagined at the beginning of the 21st century. With the photographic landscape ever evolving, photographers must also continually revise their way of working in order to keep up with the pressures on increasing demand for immediacy in production - fuelled by advances in technology - while adapting to new standards of practice in the business of photography. Traditional methods of distribution have been toppled. Many artists now focus their work on long term, research based projects, seeking creative ways to make and distribute them.

Where Are We Now? presents the work of four dynamic, contemporary artists, who are making definitive contributions to these developments. Tasneem Asultan, Edmund Clark, Philippe Dudouit and Tanya Habjouqa present solid, deeply researched, intelligent projects, which explore narratives from across cultures, focusing on issues of conflict and control. The days of the picture magazine and regular staff photographers are gone and they way artists have adapted in the wake of these changes are exciting, challenging and complicated. The works presented by East Wing are savvy; their narratives force us to reconsider events happening now and in recent history - challenging us to question our ignorance and educating us about long-term effects resulting from revisions in political and cultural systems around the world. This work is immediate and, although it only begins to answer the question - Where are we now? - the artists confront the aftermath of war, human rights issues and the revision of traditional ideas of family.

Tasneem Alsultan - 'Saudi Tales of Love'
Fuelled by her own personal history of love and loss,Tasneem became inspired and empowered by a cross section of Saudi women who opened up their lives to her. Photographing both staged and real life accounts, Tasneem gives insights into a culture that has been heavily shrouded in silence until now.

“I started the project thinking I only had my personal story to share. I was married at the age of 17, and living separately as a single parent for the last six years of an unhappy ten-year marriage. Many family members commented on how foolish I was to ask for a divorce. Only later, I realized that there were many Saudi women who had similar experiences, and who challenged expectations of typical Saudi housewives.”

“What is described in this work is an infrastructure and its shadow alternative; a story that is happening in very distinct places, in very specific times, locked in a conflict co-extensive with the planet. This is a matrix of mundanity. Given the problem it deals with, the work has necessitated the invention of new ways of seeing.”

Edmund Clark is interested in linking history, politics and representation. His work traces ideas of shared humanity, otherness and unseen experience through landscape, architecture and the documents, possessions and environments of subjects of political tension. To make 'Negative Publicity Artefacts of Extraordinary Rendition', Edmund collaborated with counter terrorism investigator, Crofton Black to assemble these photographs and documents that confront the nature of contemporary warfare and the invisible mechanisms of state control. From George W. Bush’s 2001 declaration of the ‘war on terror,’ until 2008, an unknown number of people disappeared into a network of secret prisons organized by the US Central Intelligence Agency – transfers without legal process, otherwise known as extraordinary rendition.

Philippe Dudouit, 'The Dynamics of Dust'
The final chapter of his long term photographic study, on the evolution of the Sahelo-Saharian zone is focused on Libya’s South, known as the Fezzan, a sparsely-populated and economically underdeveloped space despite significant natural resources (including oil, uranium, gold and water).

It has historically been a transit point for sub-Saharan African migrants heading to the Mediterranean and Europe, as well as for and any kind of goods moving from South to North and vice-versa. However, smuggling has recently grown significantly (including the movement of drugs), as criminal cartels profited off the deteriorating post-Gaddafi security.

In a region where exerting control has always been difficult, the post-Gaddafi implosion of the central state has further eroded its authority. In today’s Fezzan the state is essentially absent, whilst alternative structures of governance have grown, where illicit networks, local insurgents and, to a lesser extent, jihadi groups are present and compete for territorial control.

Dudouit’s 'The Dynamics of Dust' brings home this new reality of shifting allegiances and contested territories as seen from the ground.

Tanya Habjouqa, 'Tomorrow There Will be Apricots'
This popular proverb in the Levant, roughly translates to,“In your dreams”, and reflects the hopeless situation of these Syrian refugees living in Jordan. The burdens of violence are present in their scant belongings; heavy mementos that remind them of what they have lost in the war. Like many other displaced people around the world, their mobile phones have become precious talisman to them, filled with messages of love, lullabies, and hope shared between their husbands and boyfriends, other family members and friends. Brief moments of levity are a rare occurrence in a life that has come to be defined by a vicious cycle of poverty, isolation, and suffering.

The series explores the complicated intimacies of everyday life for these Syrian women who have been left behind. They cling to the hope that soon their family will be reunited again, yet at the same time, they grapple with the knowledge that most likely they will never see them again.