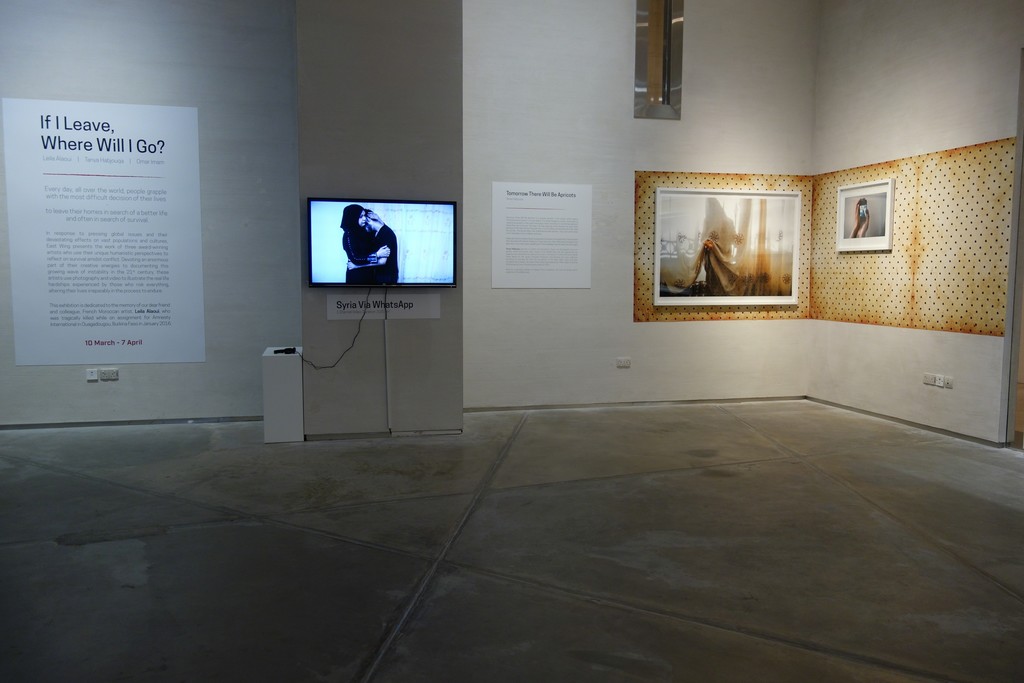 "If I Leave, Where Will I Go?" Installation shot of Tanya Habjouqa "Tomorrow There Will Be Apricots". 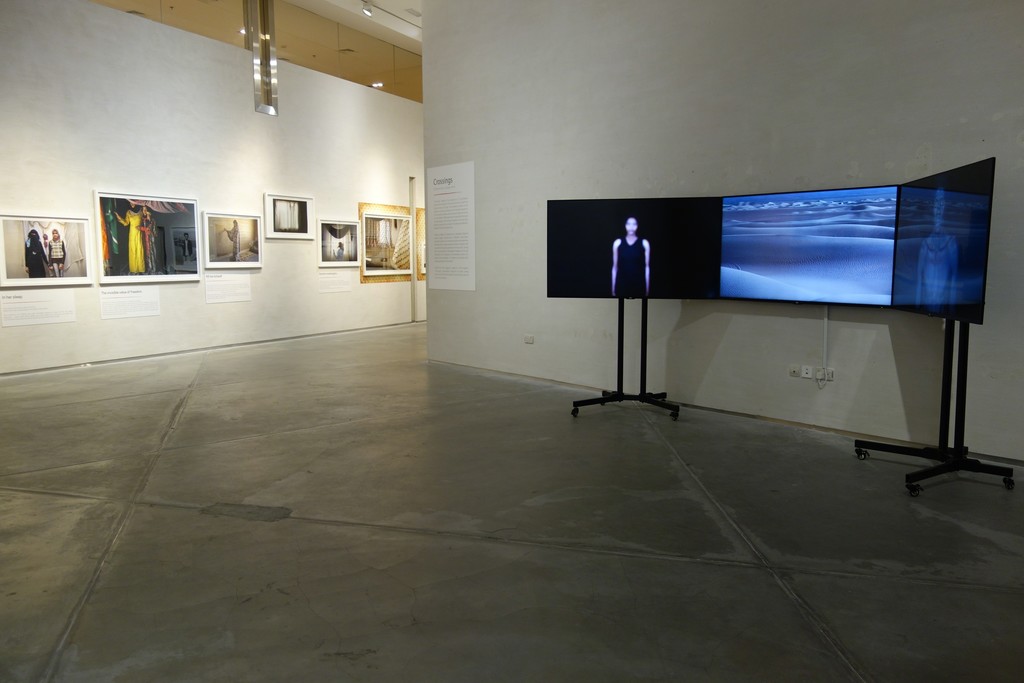 "If I Leave, Where Will I Go?" Installation of Leila Alaoui's "Crossings" and Tanya Habjouqa "Tomorrow There Will Be Apricots" 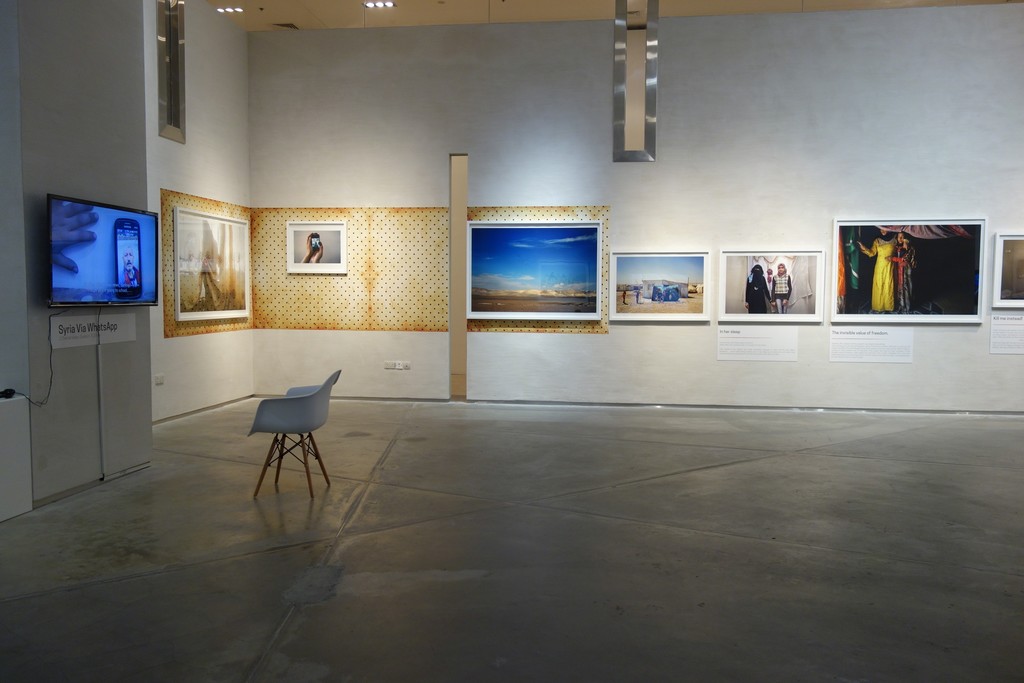 "If I Leave, Where Will I Go?" Installation view of Tanya Habjouqa's work "Tomorrow There Will Be Apricots." 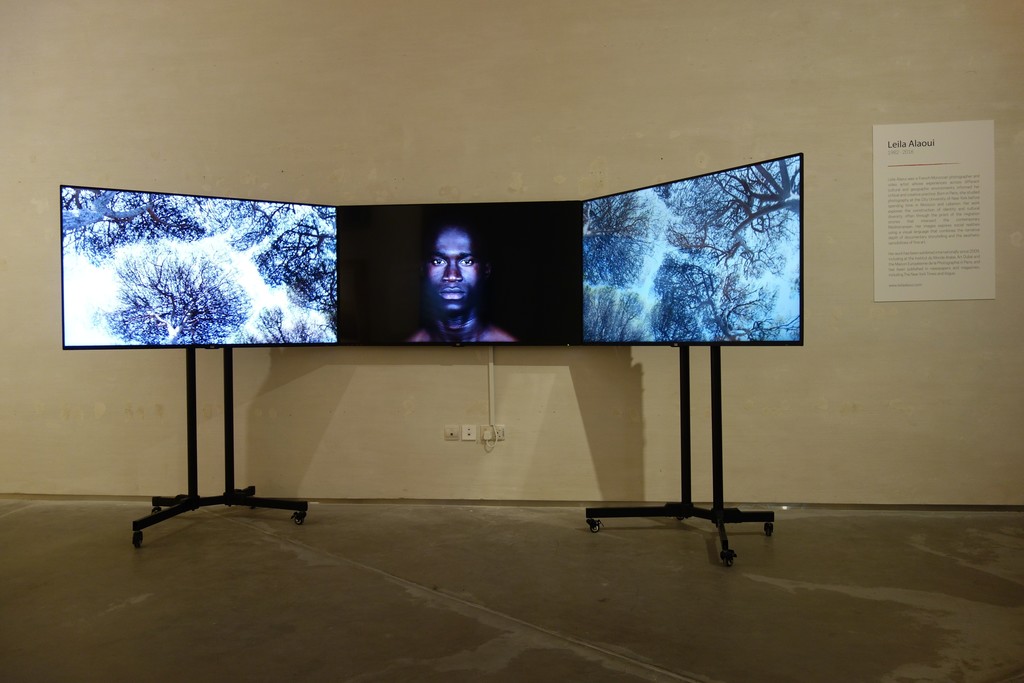 "If I Leave, Where Will I Go?" Installation shot of Leila Aloui's work "Crossings" 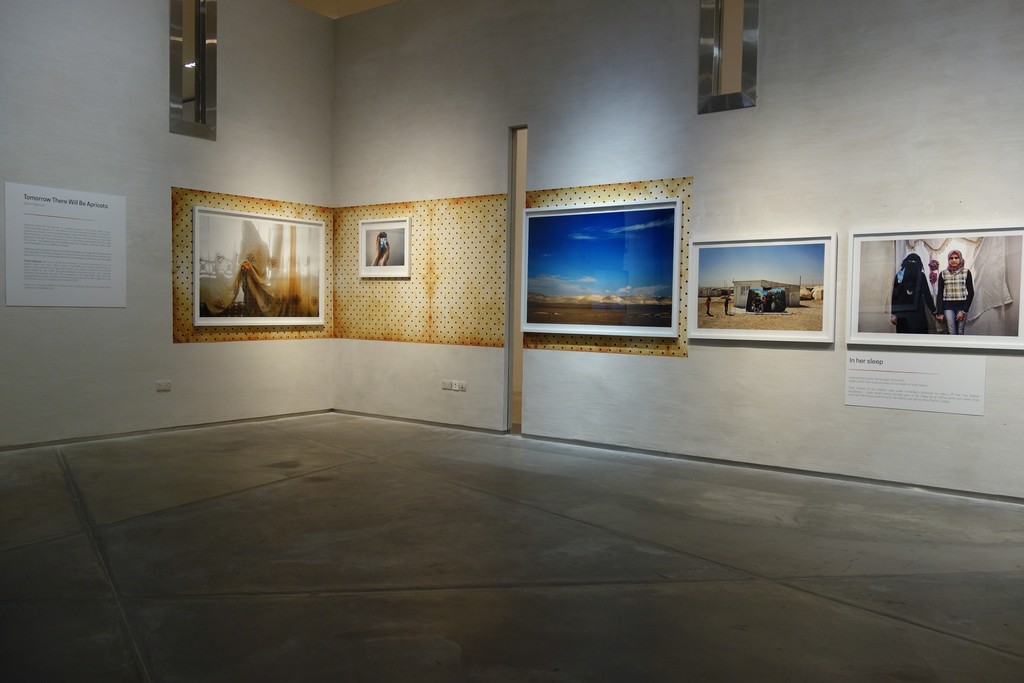 "If I Leave, Where Will I Go" installation view of Tanya Habjouqa's series "Tomorrow There Will Be Apricots" 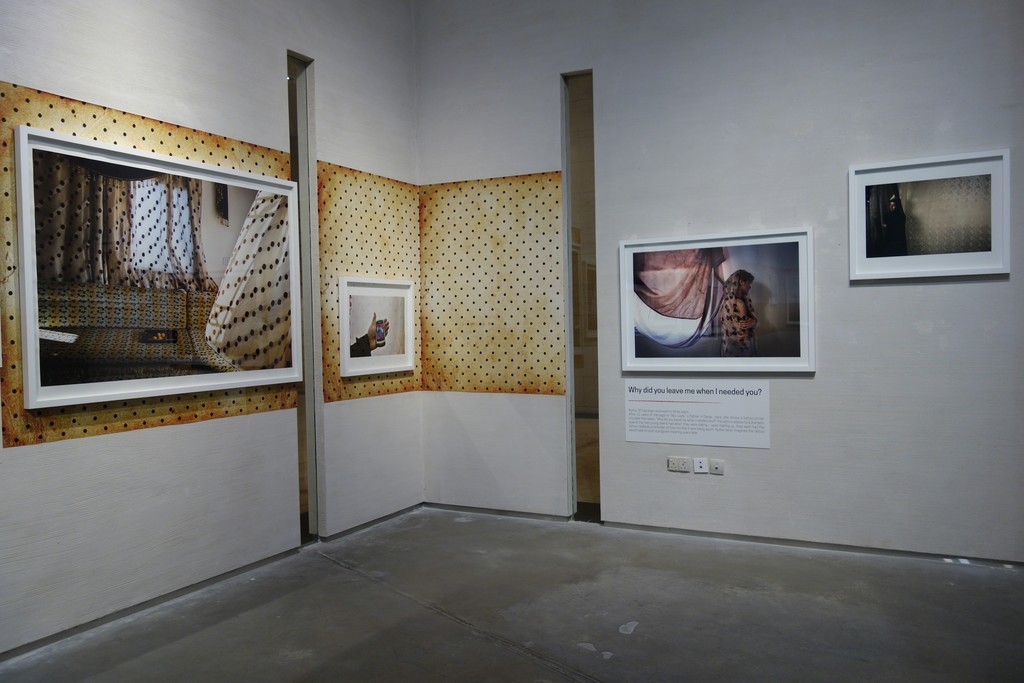 "If I Leave, Where Will I Go?" Installation view of Tanya Habjouqa's work, "Tomorrow There Will Be Apricots" 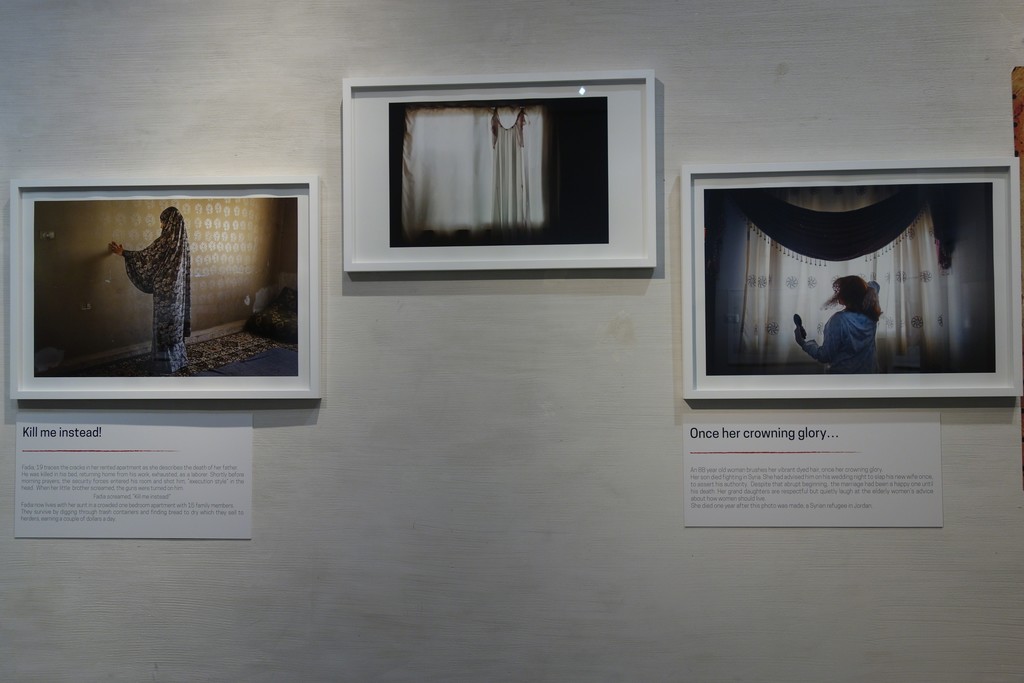 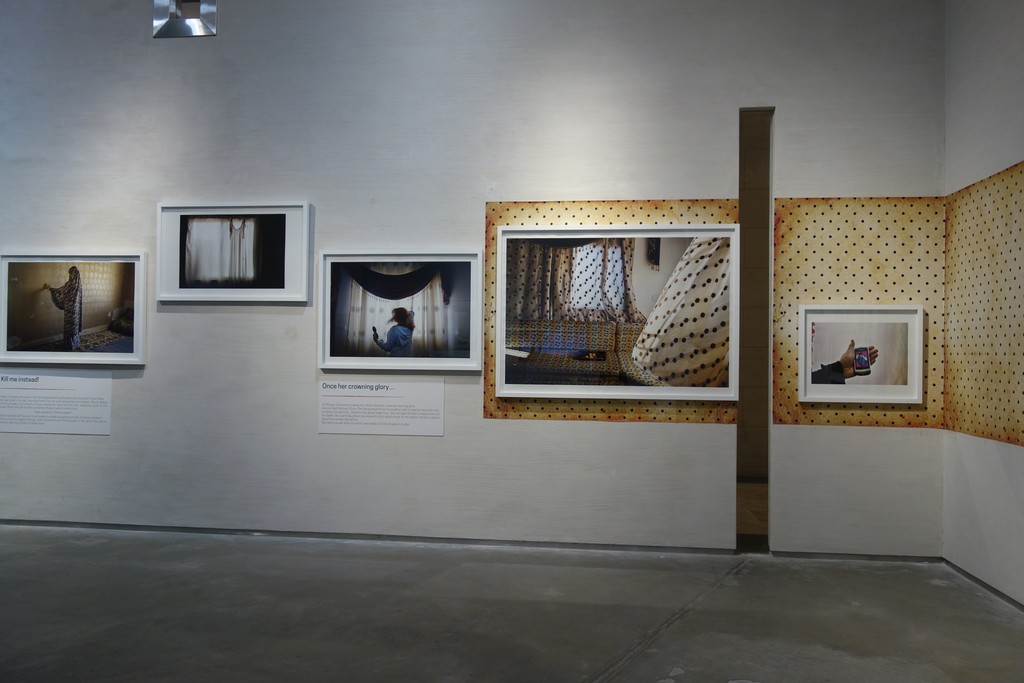 If I Leave, Where Will I Go?
A group exhibition featuring the work of:
Leila Alaoui, Tanya Habjouqa, Omar Imam

Every day, all over the world, people grapple with the most difficult decision of their lives;
to leave their homes in search of a better life.

Throughout history, for many cultures migration has been an essential fact of life. The reasons people choose to migrate are varied and almost always complex. Some people move to new countries to improve their economic situation, or pursue better education. Others leave to escape human rights abuses; torture, persecution, armed conflict, extreme poverty and ultimately, death. War reporting tends to focus on the devastation of landscapes and casualties of battle; it’s much harder to visualize stories of the resulting psychological effects on those who escape such conflict and devastation. Even sweeping vistas of tent cities set up on dusty border crossings cannot convey the scale of human destruction, or the soul-destroying loss of homes and disconnection of culture that is experienced by a refugee.

In response to these pressing global issues and the devastating effects they leave in their wake on vast populations and cultures, East Wing presents, “If I Leave, Where Will I Go”, a group exhibition of photography and video installation featuring the work of, Leila Alaoui, Tanya Habjouqa, and Omar Imam, three award-winning artists who use their unique humanistic perspectives to reflect on preservation amidst conflict. Devoting an enormous part of their creative energies to documenting this growing wave of instability in the 21st century, these artists use photography to illustrate both the tenacious fight and real life hardships experienced by those who risk everything, altering their lives irreparably in order to survive.

“If I Leave, Where Will I Go”, is dedicated to the memory of our dear colleague and friend, French Moroccan artist, Leila Alaoui, who was tragically killed while on assignment for Amnesty International in Ouagadougou, Burkina Faso in January 2016. East Wing presents Leila's video installation, “Crossing”, which is just one chapter of her life’s dedication to telling the story of migration through her work. “Crossing” reflects on experiences of sub-Saharan migrants who embark on the perilous journey to reach the elusive shores of Europe. Focusing on the collective trauma provoked by the embodied experience of crossing boundaries and becoming a fragile community in a new habitat. Alaoui’s installation explores the experiential textures of psychological and physical transitions and gestures towards the concept of Europe as a problematic utopia in the African imagination.

Tanya Hajouqa presents her latest work, 'Tomorrow There Will Be Apricots' , a popular proverb in the Levant, which means, “Tomorrow never comes,” or “In your dreams.” For Syrian refugees in Jordan, the burdens of violence are present in their scant belongings, heavy mementos to remind themselves of those they lost in the war. The draw to Europe seduces entire families, but most often because of the high risk and financial cost, it is the fathers and brothers who first make the journey. The women keep their mobile phones like talisman, carrying within them voice messages of love, lullabies, and hope from their families. Habjouqa's photos explore the complicated intimacies of everyday life of Syrian women who have been left behind, clinging to the hope that soon their family will be reunited once again and, in too many cases, grappling with the knowledge they will never see them again

Omar Imam’s “Live Love Refugee” explores the mental state of Syrian refugees in Lebanon, specifically investigating how relationships and dreams are affected by conflict and displacement. Working with his subjects in a theatrical manner, each acts out their personal stories of pain and desire in a surreal re-telling of the experiences they encountered while crossing multiple borders to escape their war torn country.

In conjunction with the exhibition "If I Leave, Where Will I Go?" East Wing presents a one night screening of 'Queens of Syria' which tells the story of fifty women from Syria, all forced into exile in Jordan, who came together in Autumn 2013 to create and perform their own version of The Trojan Women, the timeless Ancient Greek tragedy all about the plight of women in war. Not one of them had ever acted before.

More information on this programme event can be found here:
http://east-wing.org/events-pc-19.html

Leila Alaoui was a French-Moroccan photographer and video artist whose experiences across different cultural and geographic environments informed her critical and creative practice. Born in Paris in 1982, she studied photography at the City University of New York before spending time in Morocco and Lebanon. Her work explores the construction of identity and cultural diversity, often through the prism of the migration stories that intersect the contemporary Mediterranean. Her images express social realities using a visual language that combines the narrative depth of documentary storytelling and the aesthetic sensibilities of fine art.

Her work has been exhibited internationally since 2009, including at the Institut du Monde Arabe, Art Dubai and the Maison Européenne de la Photographie in Paris, and has been published in newspapers and magazines, including The New York Times and Vogue and is represented by East Wing. http://www.leilaaloui.com

Tanya Habjouqa was born in Jordan and educated in Texas, her photographs focus on gender, social and human rights issues in the Middle East and she approaches her subjects with sensitivity, but also with an eye for the absurd. In 2014 she won a World Press Award for her series Occupied Pleasures, documenting the many ludicrous moments of everyday life that the occupation of the West Bank, Gaza, and East Jerusalem has created. Her book of this project was selected by TIME magazine and the Smithsonian as one of the best photo books of 2015.

Tanya is a founding member of Rawiya Photo Collective, the first all female photo collective of the Middle East. She is represented by Panos Pictures and East Wing.
www.tanyahabjouqa.com

Omar Imam is a Beirut-based, Syrian photographer and filmmaker. Working as a black and white photographer since 2003, Omar has completed many personal projects and social campaigns in Syria.

Since 2011, he has used sharply satirical conceptual photography in reaction to the overly violent situation in Syria, which has caused him to often published his work under a pseudonym. After receiving a degree in accounting from the Commercial Institute in in 2001 he left his base in Damascus in late 2012 and began making fictional short films that focused on issues of Syrian refugees. Individually or with NGO’s Omar has completed numerous films, photography projects, as well as lead workshops with Syrian refugees in Lebanon. Imam’s aesthetic and artistic choices are always linked to Surrealism, symbolism and dark comedy.

Omar’s work has been featured internationally at Photoville Festival in Brooklyn New York (2015), and is a past grantee of the Arab Fund for Arts and Culture and the Prince Claus Fund (2014). Omar Imam is represented by East Wing.
http://arabdocphotography.org/project/live-love-refugee

For more information or to RSVP please contact Elie Domit at:
[email protected]