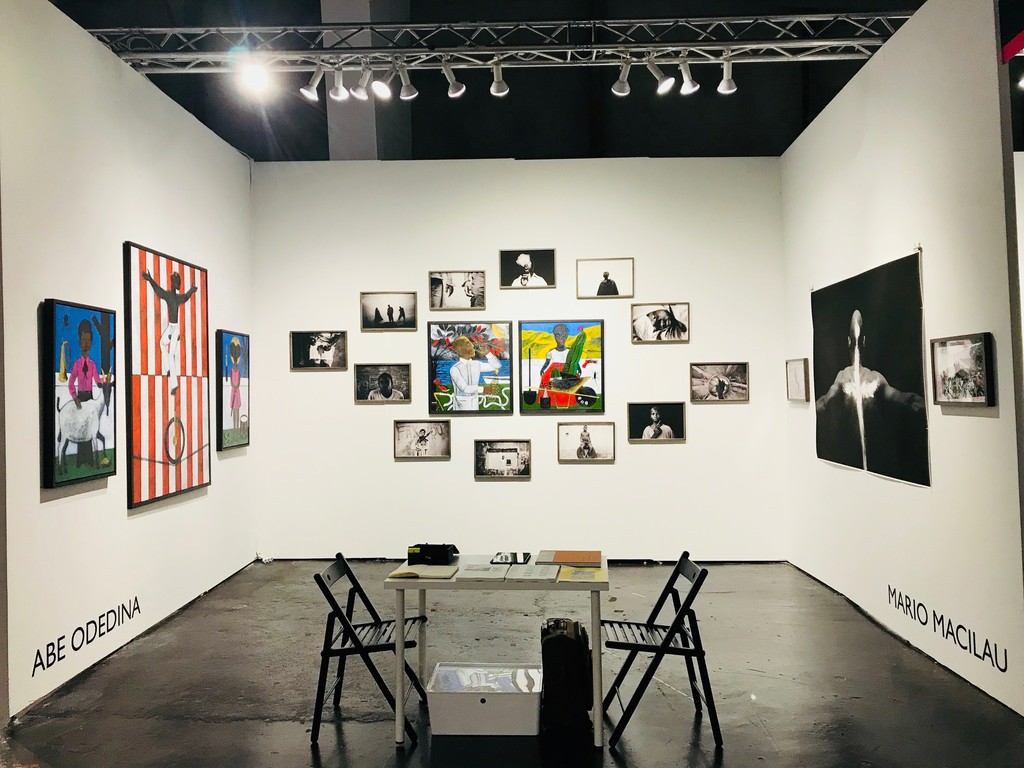 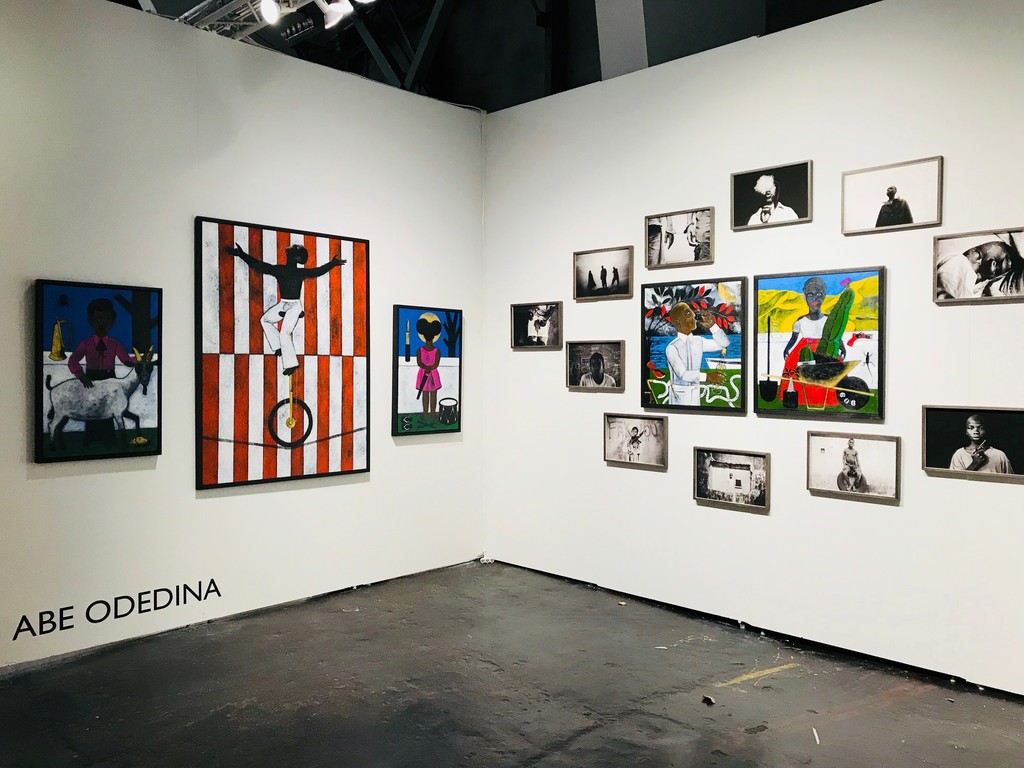 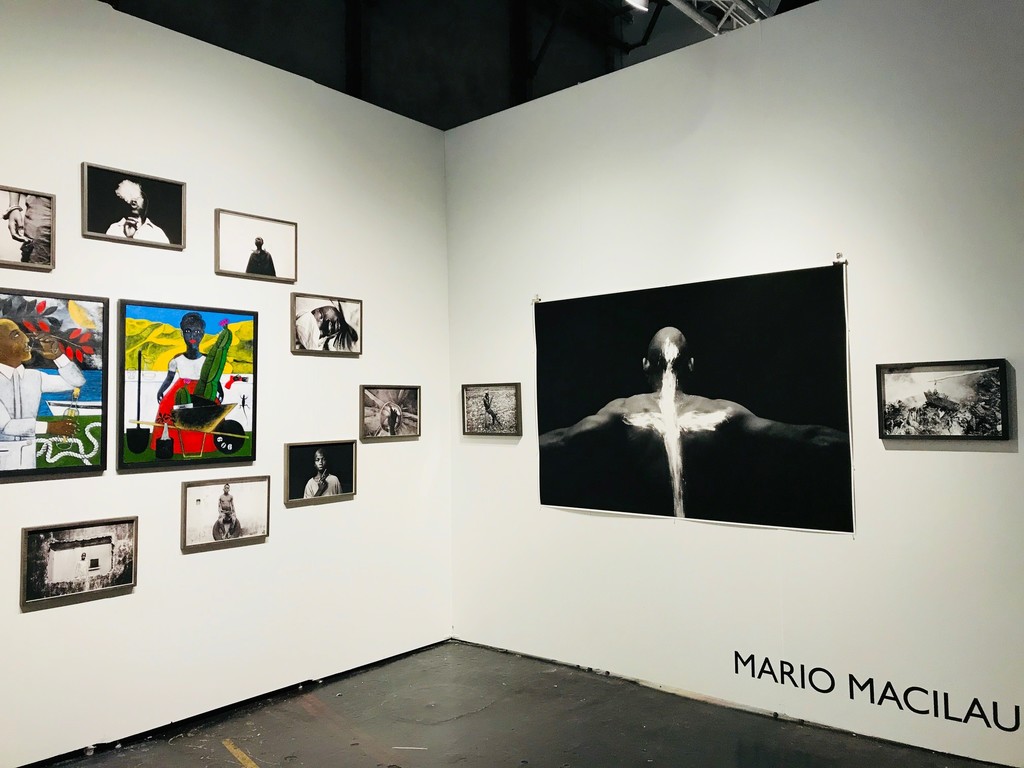 Ed Cross Fine Art is proud to exhibit artists Mário Macilau (b. 1984 Mozambique, lives and works in Maputo) and Abe Odedina (b. 1960 Ibadan, Nigeria, lives in London and Salvador Bahia) for If So, What? 2018.

This presentation will create a conversation between Abe Odedina’s new paintings, bold and mythical whilst always accessible, and Mário Macilau’s documentary, yet deeply poetic, photographic series. The works on display are calls to action addressing how we may best prepare to survive and thrive during the current conditions of our time. Mirrored by two “crucifix” poses – a poised monochromatic spiritual figure and glorious high-flying unicyclist – the works speak to how we can live with purpose, dignity, and joy. This iconic stance summons references from religious iconography to bodybuilding, wherein this power pose indicates super human strength. It encompasses a way to be as big as possible, air out your wingspan, and reveal your simultaneously strongest and most vulnerable moment. It is a universal symbol of power: of suffering and sacrifice, yet also fortitude and triumph.

Mário Macilau is a photographer who works with “the ghosts of society” – socially isolated groups and subcultures – activating subjects and their stories though his psychologically sensitive yet loaded photographic lens. He believes in the people and places that he documents and represents, and views his artistic practice as a tool for social change. Through this patient, subtle, and empowering approach, Macilau’s work gives voice to repressed histories and socio-economic oppression, whilst still conveying the underling beauty, dignity and resilience that drive the human spirit and our collective consciousness. “As a photographer, I believe in the power of images,” Macilau states, “I've been exploring the relationship that exists between the environment, human beings, and time.” Works will be drawn from his series Faith, 2015-2017 (addressing the animist practices in contemporary Mozambique originating from traditional religions founded upon the belief that individual spirits and ancestors inhabit natural objects and phenomena to affect the living); Profit Corner, 2015-2017 (covering the Maputo Municipal dumpsite which serves as a significant livelihood for local people without any other work opportunities and recently experienced a tragic landside); and Growing in Darkness, 2012-2015 (revealing the inner world of street children in Maputo where Macilau lives and grew up). These bodies of work abound with individuality and convey a process of trust and respect leading to portraits of youths, religious leaders, objects, and environments each with their own singular identity, experience, and power. Thus at the heart of these researched-based projects reflecting on the silenced realities of the artist’s everyday context – labour, poverty, invisibility, and spiritual power – is the earnest connection enabling the artist to give the people he represents a voice.

Abe Odedina’s paintings speak through a highly legible allegorical vernacular, warmly hailed as “Brixton Baroque”. He is influenced by a diverse range of creators – Voodoo practitioners from Haiti, the Painters of the Sacred Heart, anonymous African craftsman – championing those who choose to be makers. His practice seeks to revive and deconstruct quintessential classical themes spanning from ancient Greek to Yoruba mythologies to create a charged dialogue between epochs, cultures, and peoples. The stories breaking through the surfaces of his paintings surpass physical borders. They activate a uniquely contemporary conversation that oscillates between life and art, and in the folk tradition, life trumps art. “The struggle is to reconcile bold imagery with ideas about ambiguity or indeterminacy,” The artist attests, “My intention is to arouse the imagination and heart of the viewer and to detonate ideas in another realm.” Odedina’s recent works present distinctly bold and colourful individual figures who find themselves emboldened physically and emotionally, practicing the power of taking up space. Their imaginative compositions and seductive symbols invite viewers to fall into a pool of dreams and daring.

Macilau’s practice will be in dialogue with Odedina’s new work as testaments of “soft power” – empowering actions and words that radiate a sense of responsibility and camaraderie. Both artists create intimate portraits that encourage all whom are present to engage in a world of human agency: figures that look directly and deeply into the eye and heart of the viewer – establishing a connection that enables us to see the world, objects, symbols, and ourselves that much more clearly and powerfully. Odedina’s everyday superheroes from mythology, history, and contemporary society stand as allies aside the living individuals captured in Macilau’s photographs. These people are captured through Macilau’s sensitive lens to dispel an other-ing gaze in favour of a sense of awe yet understanding – a gesture of collective belief and agency. His lingering photographic presence thus distinctly resists one of an imposed interpreter, mediator, or impresario. Both Odedina and Macilau ultimately serve as confidantes and storytellers, introducing inner worlds through a vocabulary of candour, clarity, and nuance. Through the works of these two artists an honest and empowering vision is produced, at once triumphant and critical. Their works present us with fears and struggles alongside of dreams and dignity. And their gathering at this specific time and space inspire in us ways to be agents of change – even salvation – through prudence and power.