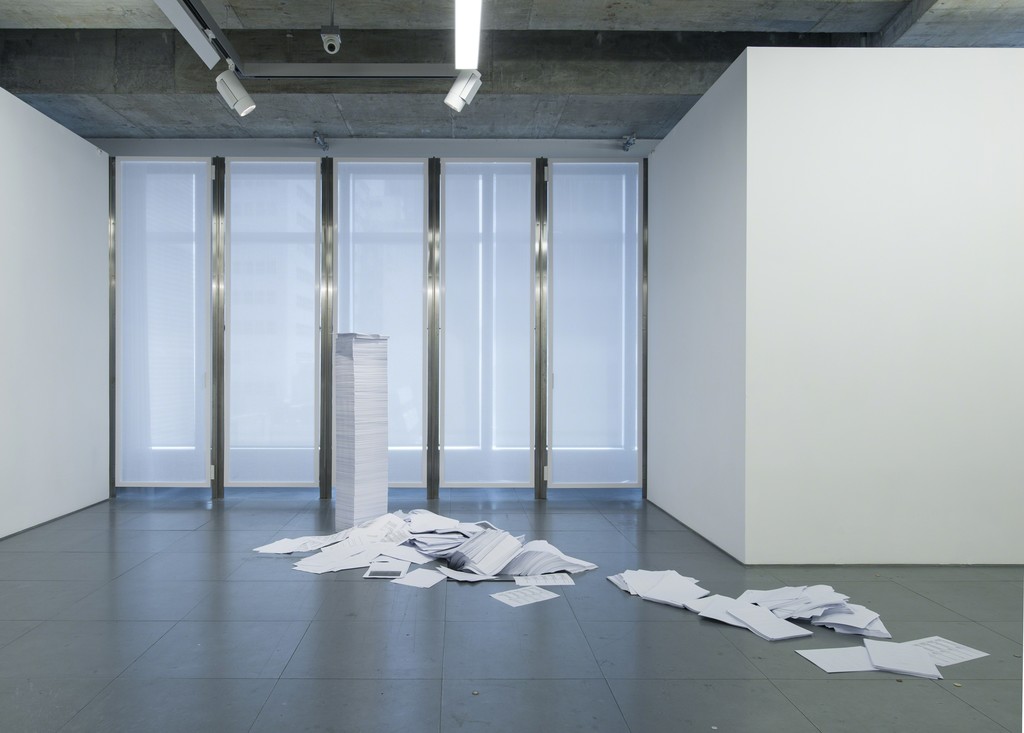 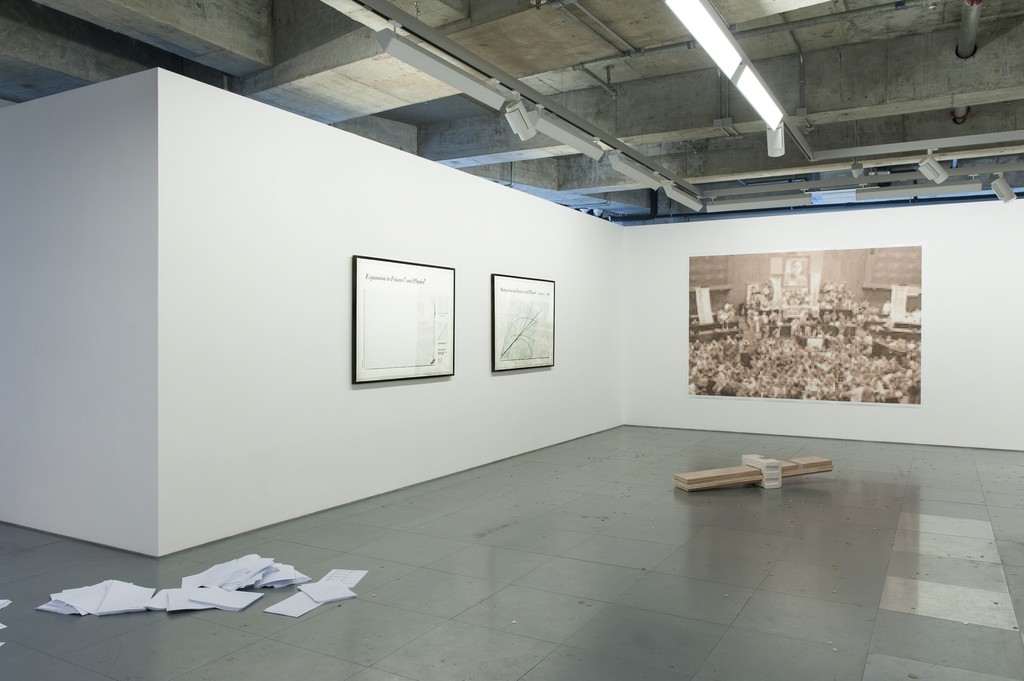 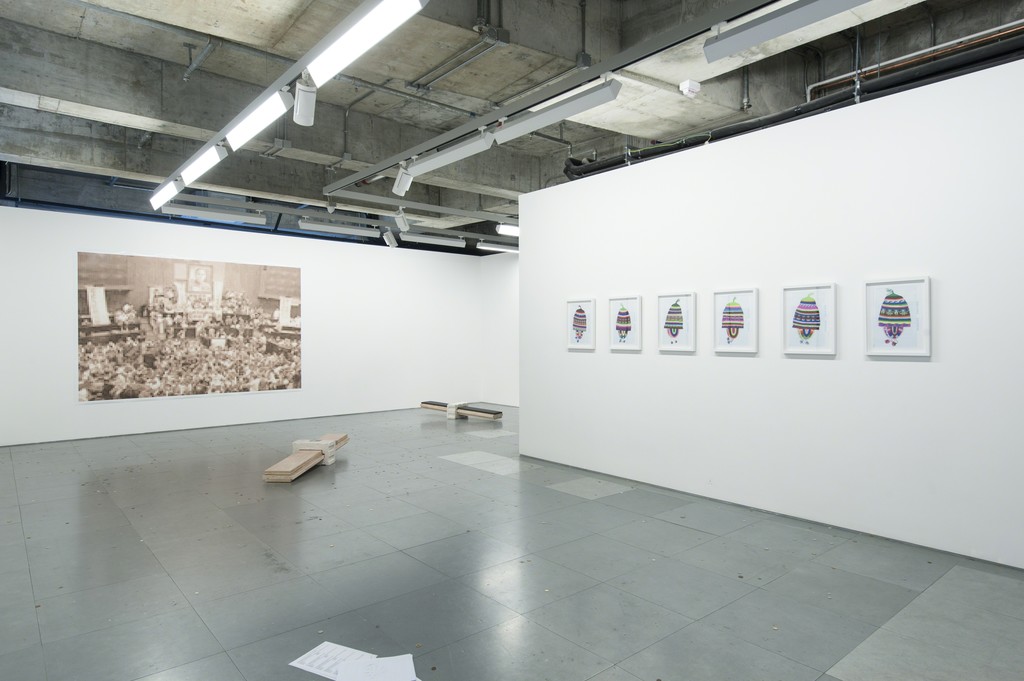 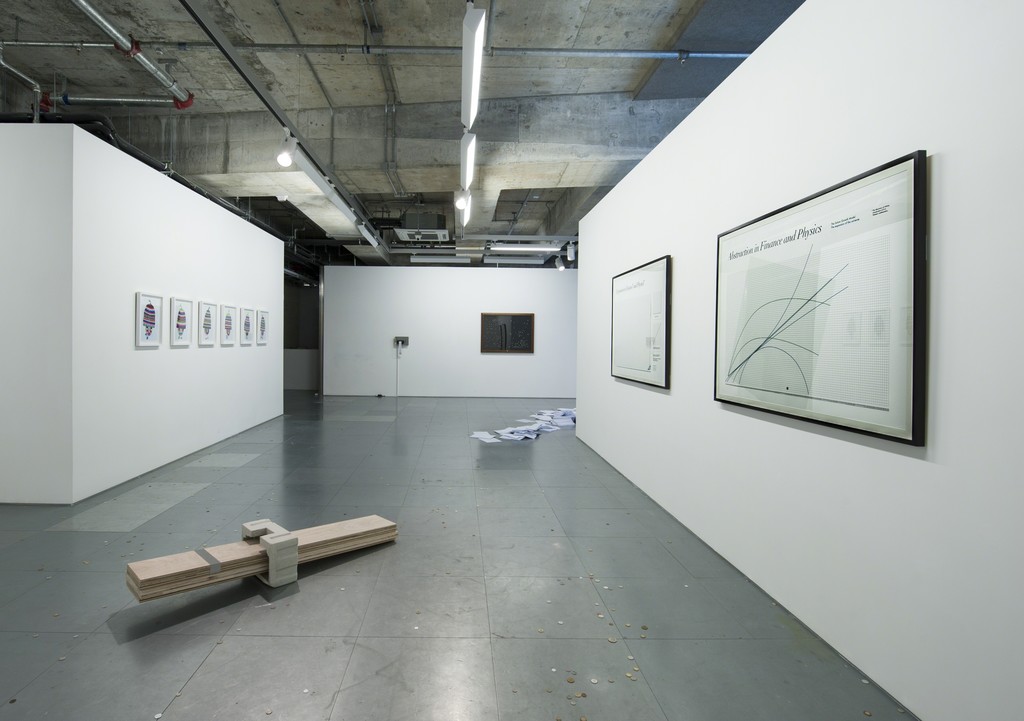 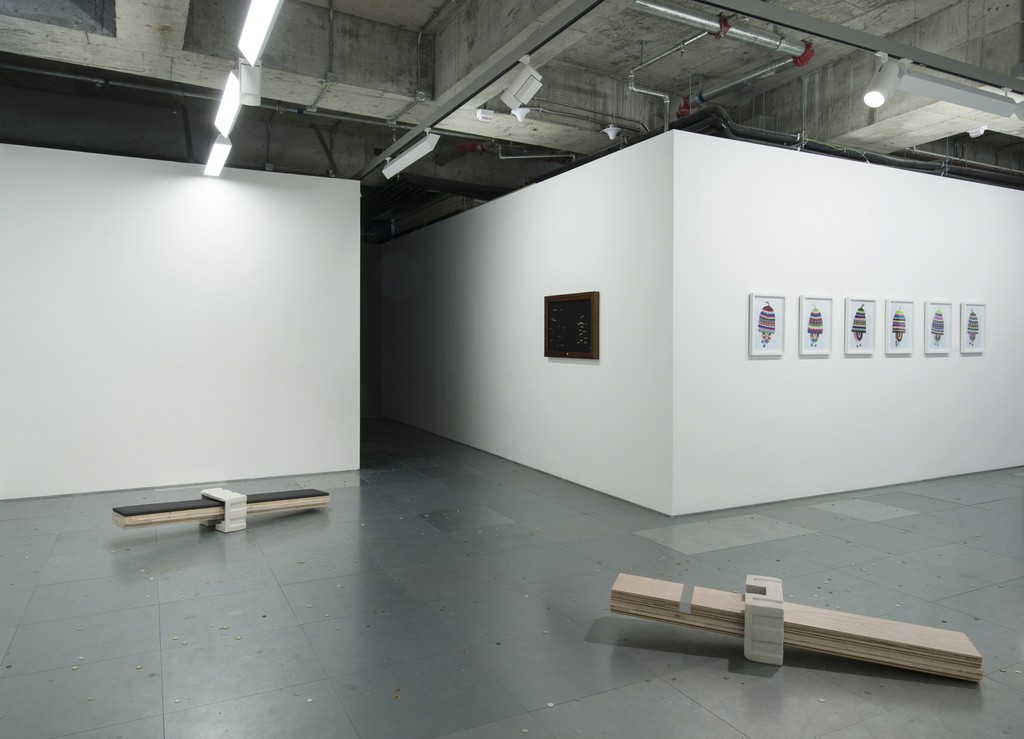 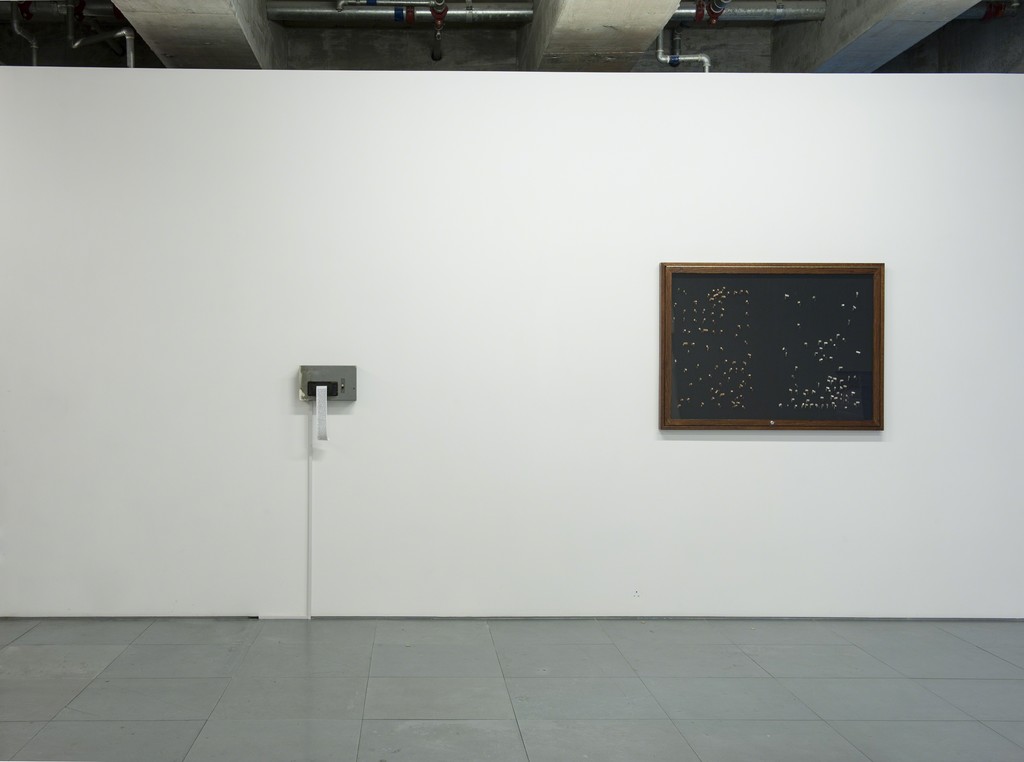 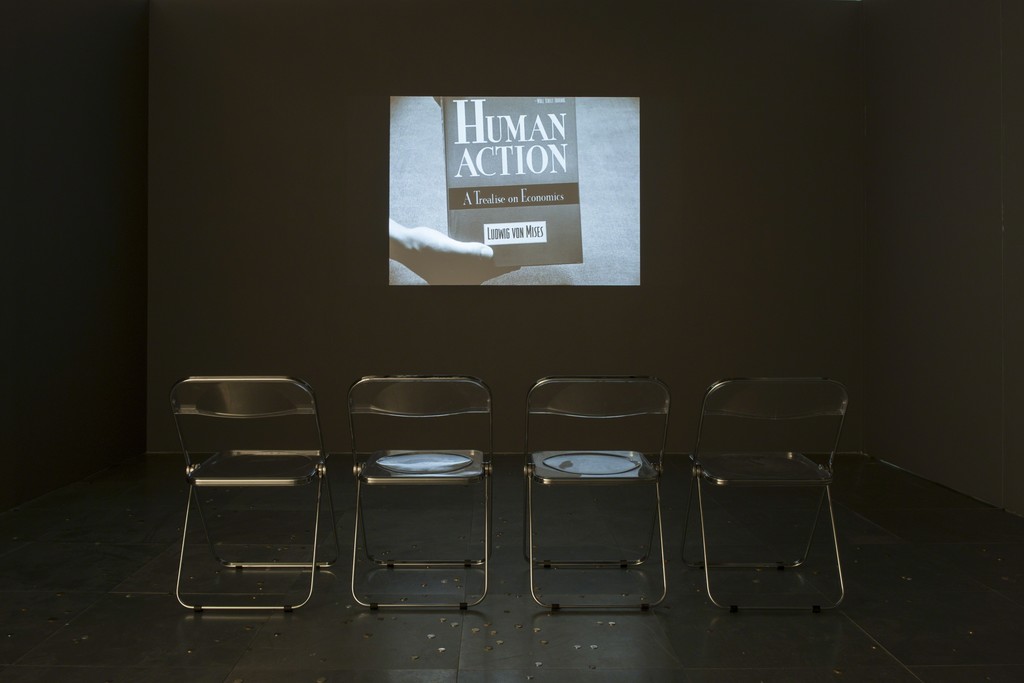 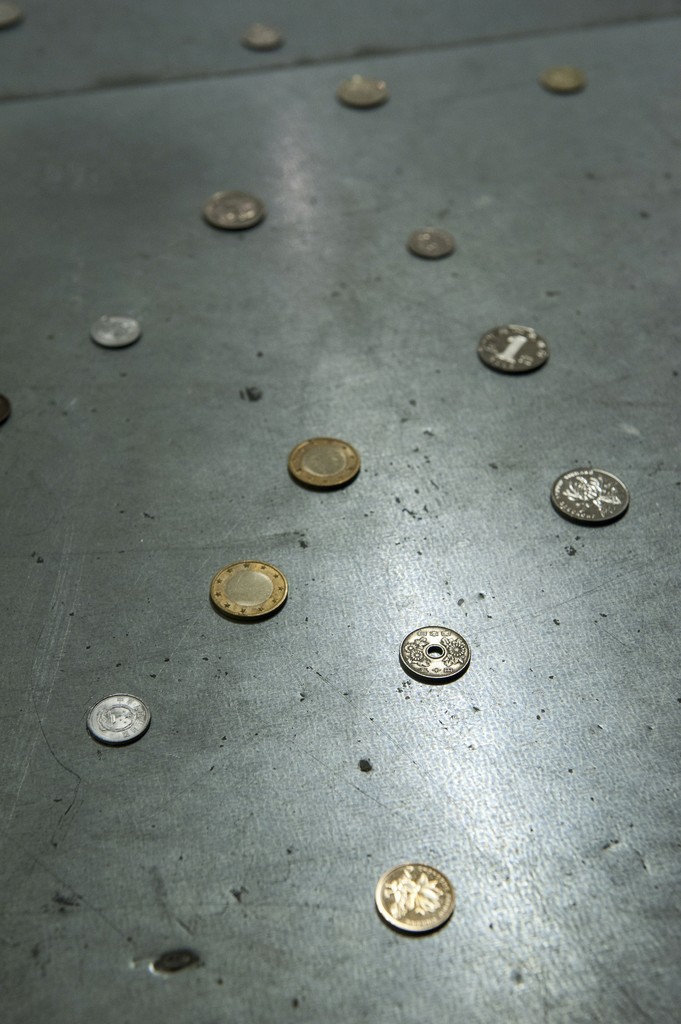 “Balance Sheets is an international group show that draws out relationships between ideas of balance in aesthetics, economics and ecological thinking.

Taking its title from accountancy, Balance Sheets takes looks at how we measure value between different fields ‘on paper’. In finance the balance sheet has a sort of virtual aesthetics, a ‘correct’ and stable form of representation where business income and expenditure of resources are presented as equal – even if this includes a surplus or profit. This notion of balance is equally a vital element in formal and traditional artistic composition. Its value has been displaced from visual perfection of the golden section in painting, or the contra-posto in sculpture, and now resides in a conceptual realm – a move that is traced through modernist abstraction, minimalist and conceptual practices. While this history rejects composition in form, there remains a sense of balance between visuality and artistic process and materials.

The artists proposed move between these areas of material production and intellectual or conceptual work. Their works on paper move between the representational value of the materials – paper money, business reports, or charts – to emphasise these process of exchange of values between language and representation – that is working drawings or sculptural work related to the themes. This further reflects on another notion of balance that is in common currency – that of ‘precarity’.” – Kit Hammonds

Duncan Campbell (b. 1972, Born and lives in Ireland) will present his film work ‘Arbeit’ (2011). Exhibited within an immersive installation, it holds a mirror to the palsied world economy, in particular the crisis facing the euro. It does this through a biographical account of its ostensible subject, the German economist Hans Tietmeyer, one of the chief technocrats of the monetary union.

Lia Forslund (b. 1984, Sweden) & Franek Wardynski (b. 1989, Poland) are London-based artists whose collaborative work explores dystopian ideas of ‘value collapse’. Their collaborative work is a ‘critical text machine’ that prints on demand a short narrative text based work set in the lead up to the 2007 economic crisis that draws on the jargon of financial industry.

Ximena Garrido-Lecca (b. 1980, Born and Lives in Lima, Peru) creates work that finds symmetries between the forms of conceptual and post-conceptual art with vernacular architectures and hand-crafts found in indigenous Andean cultures. A Gross of Chullos is a series of 144 drawings (shown in units of 6 or 12) of traditional hats made from hand coloured photocopies on accountancy paper. Each is the same but unique (as are the hats themselves) due to the possible number of colour variations.

Han Ishu (b. 1987, China. Lives in Japan) creates drawings, made of coins replacing pixels, related to local economies and political issues. The two works exhibit relate to protests in Fukushima and Taiwan.

Toril Johannessen (b. 1978, Born and Lives in Norway) makes use of analogies between both the scientific and capitalist market interpretation of expansion and abstraction. Through graph plots, such as in her Expansion in Finance and Physics series, she shows how these very words are used in various economic, physics and art historical documents.

Gabriel Kuri (b. 1970 Mexico. Lives in USA) creates visually refined sculptures, collages, installations, and photographs, working from repurposed natural, industrial, and mass-produced objects. On display will be two ‘coin and cigarette butt board’ works, which combine assembled coins and cigarette butts delicately imbricated into sober formal sculptures that play on the codes of minimalism..

Heidi Voet (b. 1972, Belgium, lives between Brussels and Shanghai) looks at the relationship of multitudes presented in anti-formal sculptures and installations. Voet will present Stars and Constellations, an installation of coins from various global economic centres – Germany, UK, Hong Kong - that are spread on the floor of the gallery. Among them are ‘token’ euros commissioned by the artist. These faceless coins represent the dislocation of capital from its location within globalized finance. These tokens tread the line between forgery and reproduction.

Hannes Zebedin (b. 1976, Austria) uses the forms of conceptual art and protest to make installations and interventions in public space. Zebedin’s installation Zweifelscontinuum consists of copies of the International Monetary Fund’s report on global economics stacked floor to ceiling in the gallery, and allowed to collapse under its own instability. It is combined with an ‘energy loss’, system, such as an air conditioning system. This reference to natural seasons is a relationship between seasonal change and economics drawn from Karl Marx’s theories on capital.

Kit Hammonds (b. 1975, UK, lives London & Taipei) is an independent curator whose practice includes exhibition and event-making, education, as well as critical and creative writing. His recent projects include Co-Curator of the CAFA Museum Biennale, Beijing; curator of Blue Lines, Red Threads, Serralves Museum, Porto; Co-Founder of Index Art Book Fair, Guadalajara & Mexico City; and Director-in-Residence at the Taipei Contemporary Art Center (all 2014). From 2007-2015 he held the position of Senior Curator in Curating Contemporary Art at the Royal College of Art, London and in 2015 was a recipient of the Taiwan Fellowship, 2015.