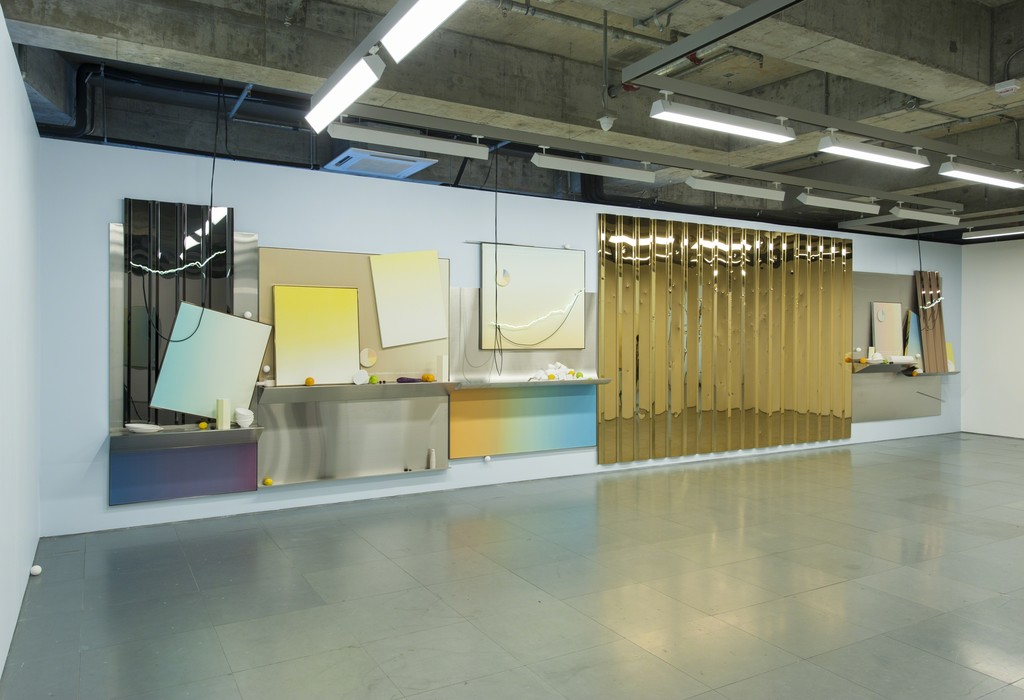 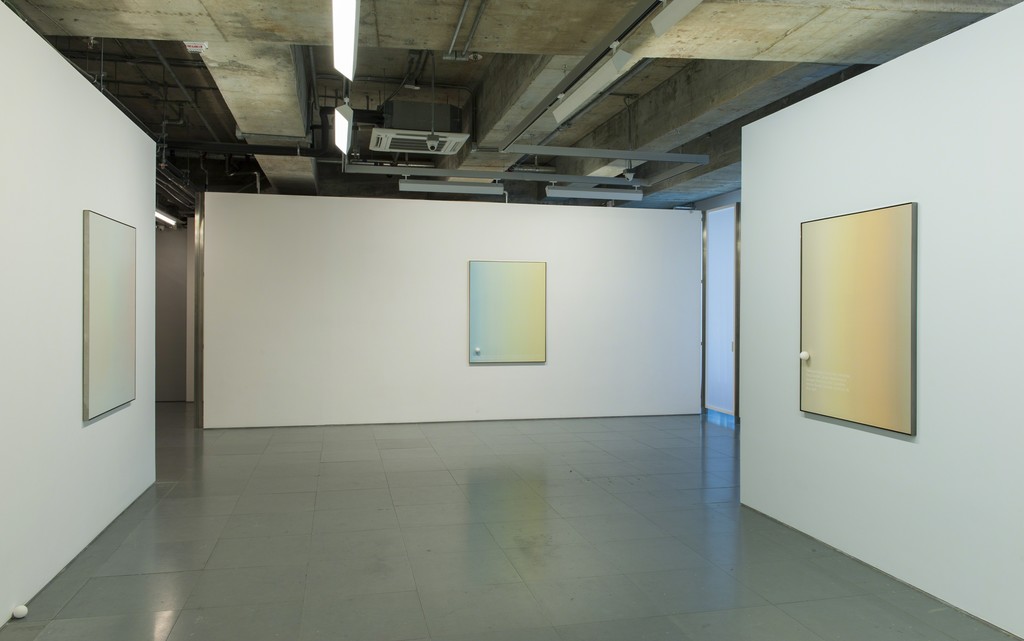 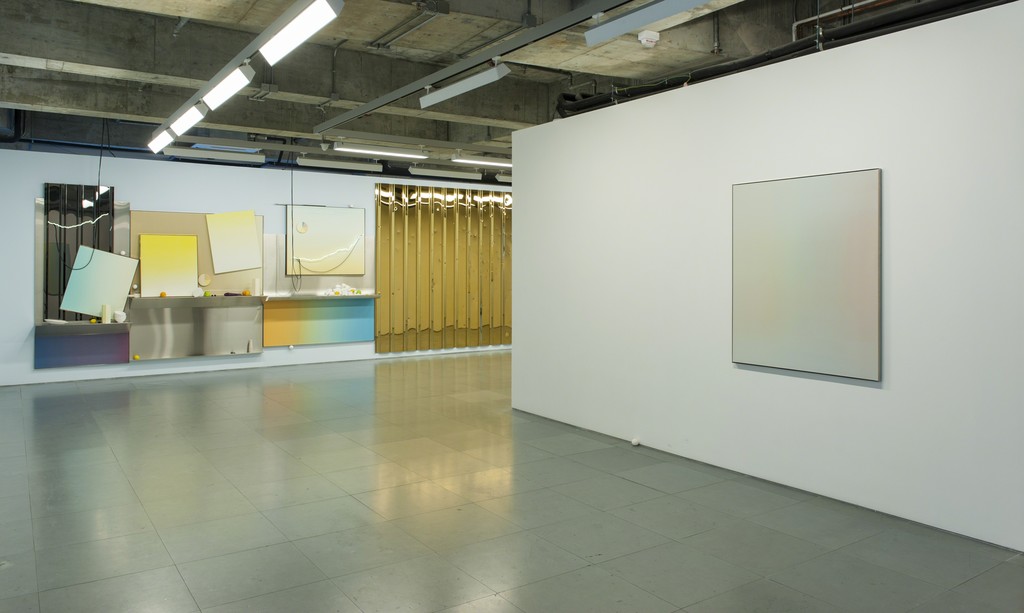 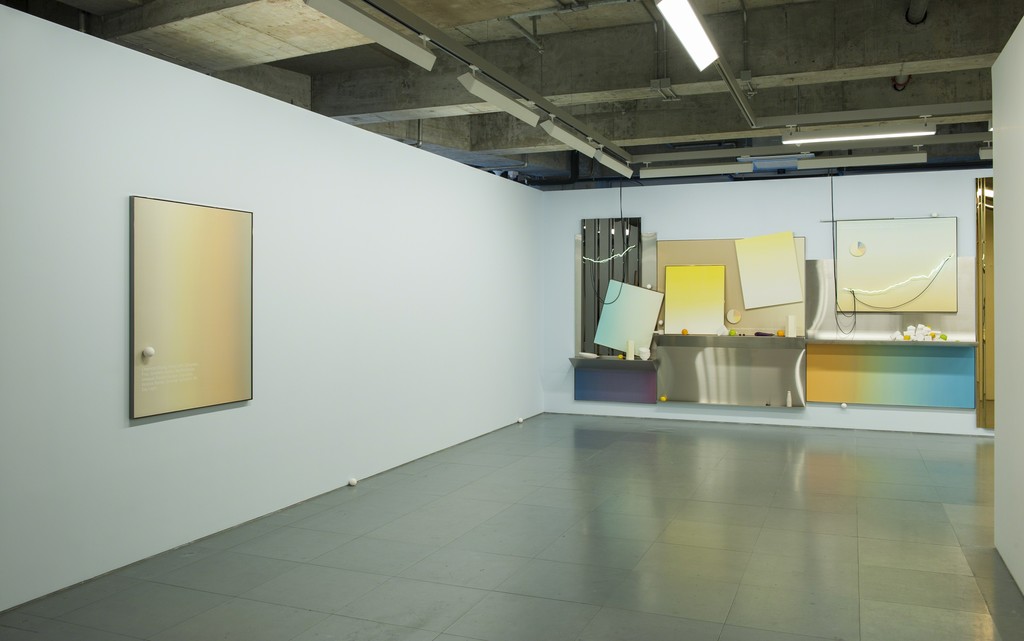 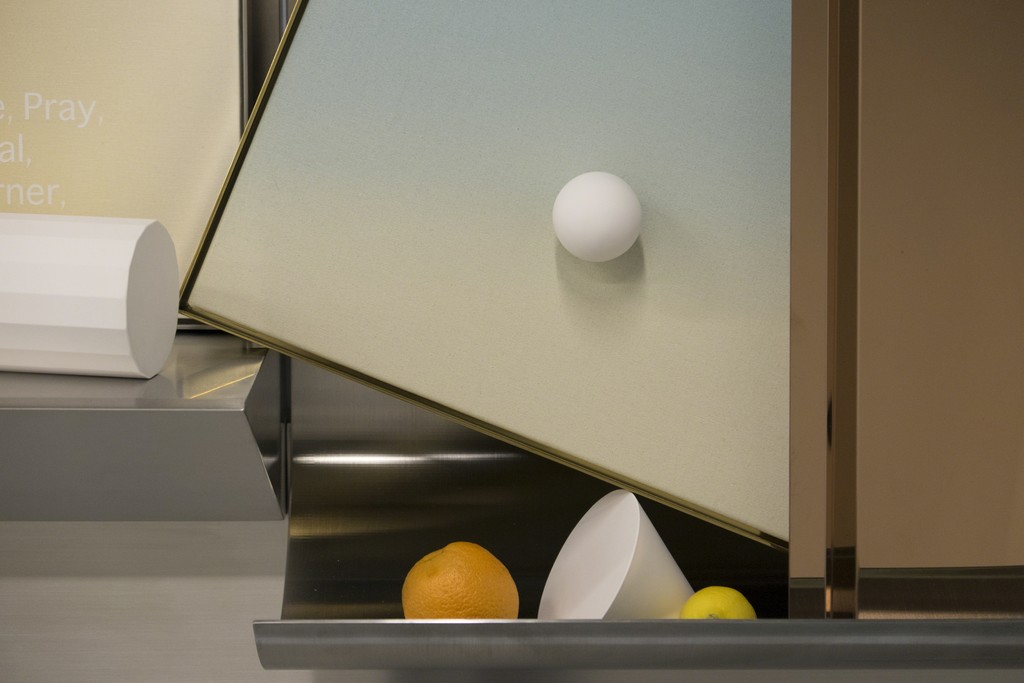 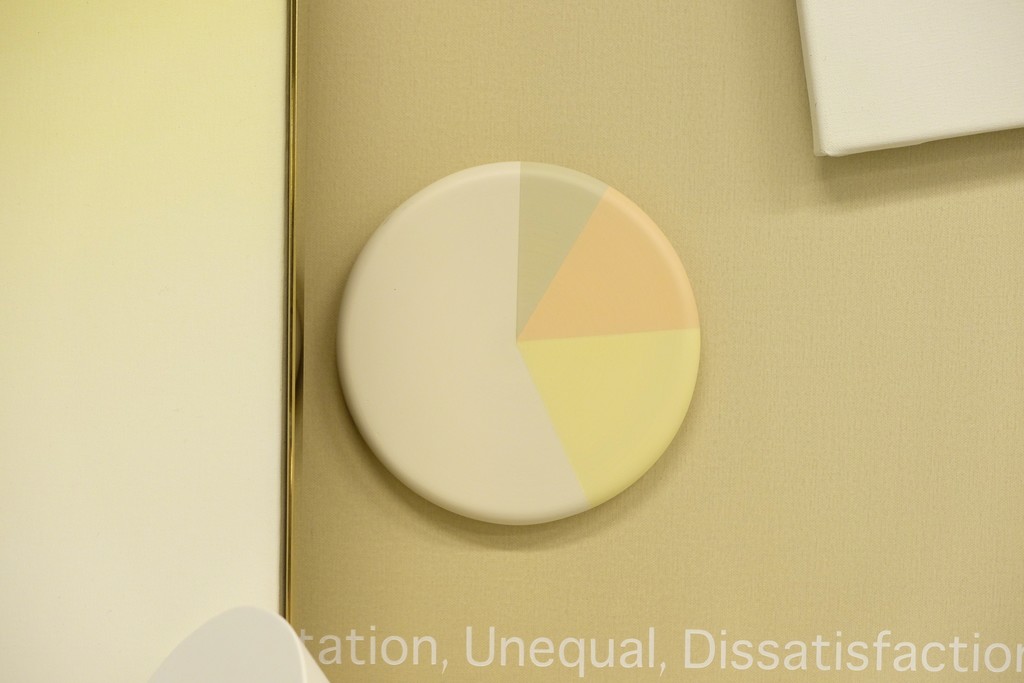 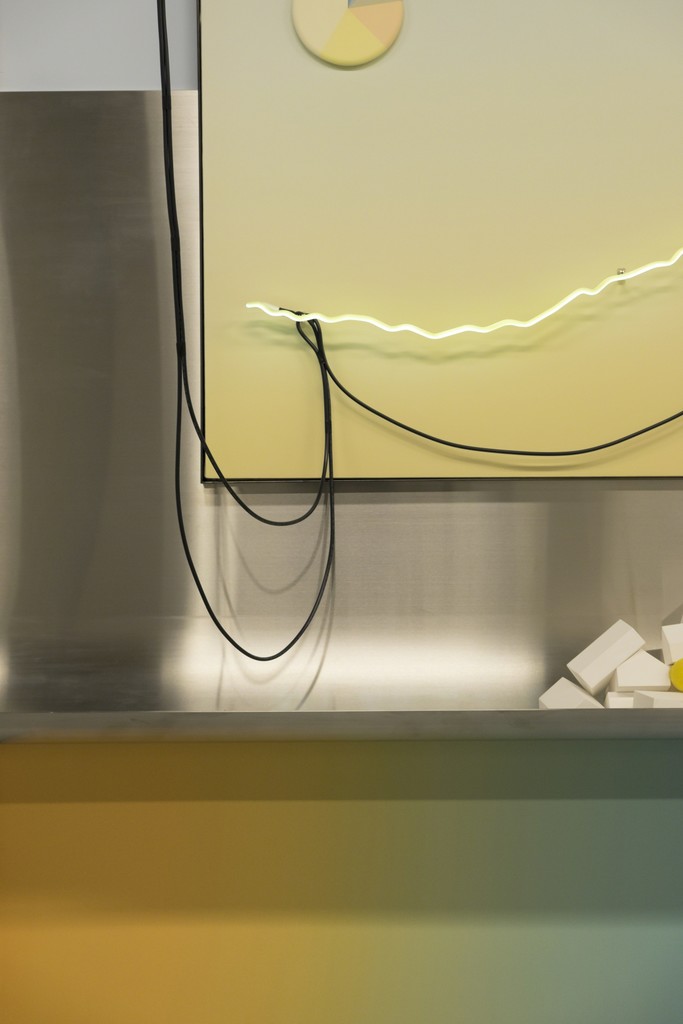 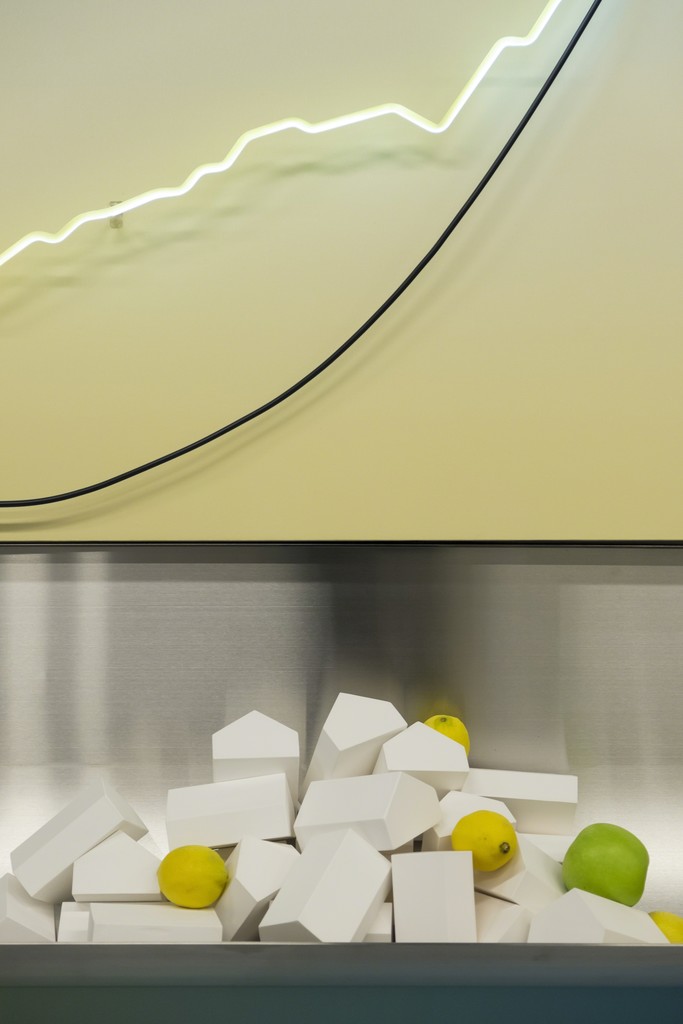 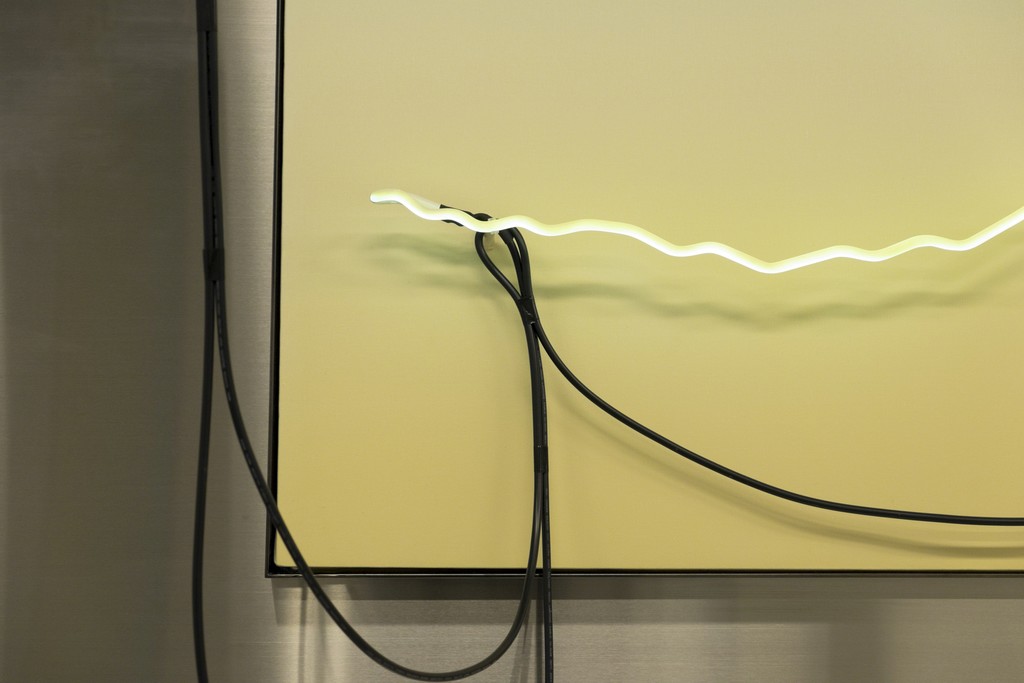 Seemingly random objects and shapes juxtaposed and exposed across a panoramic wallscape; graphs, chemical utensils, stacked paintings - a patchwork of colours and depths. An open-ended sentence, Chou Yu-Cheng’s (b. 1976, Taiwan) major installation and solo exhibition at Edouard Malingue Gallery points to a measured visual articulation of an abstract mental expression. Presenting across an entire wall a major panorama that bridges wallpaper, sculpture and painting, the overall display is punctuated by delicate paintings and sculptures at select corners of the exhibition space - brief interludes to Chou’s visual score, his deliberate yet lyrically ad hoc composition.

Modified, shifted or transferred elements amounting to new relationships between status and object: herein lies the pulse of Chou’s practice that builds, across multiple mediums, a subtle critique of mass media, institutions and the mechanisms that produce them. A graduate from l’Ecole Nationale Supérieure des Beaux-Arts de Paris, and the research programme La Seine, Chou has gained international recognition for his dialectical interplay between the source and results of his creations. Through his selective conversations, Chou shapes a minimal yet meticulous set of intellectual and aesthetic tricks, which ultimately play on the properties of art, object and space.

Running throughout Chou’s practice is the process of cooperation and display. The wallspace installation itself presents an alternative to traditional modes of presentation being composed of various stands that act as shelves for accumulation of various placed objects. Viewed at a distance, seemingly read from left to right, admired curiously up close - these are all modes of interacting with the work, each encouraged and none more correct than the other. As such, Chou invites a relationship between the work and the viewer; open to interpretation, it is for the viewer to project their own associations between the objects and weave their own narrative regards each object’s relations. As with a musical score, we are free to express Chou’s creation with our own enigmatic interpretation.

Further highlighting this sense of cooperation is the central item of the major installation; a bold slab of galvanised steel dotted by highly physical indentations. Initiated whilst conducting a residency at the Künstlerhaus Bethanien (Berlin) in 2015, the work commenced as a clean slate, which members of the public were invited to throw rocks at. As such it evolved from a reflective surface to an interactive and collaborative sculpture interrogating the act of protest to now it’s current incarnation - a long interlude of striking visual aggression amidst a softer and more delicate visualscape.

Slowly, through contemplation and observation, one starts to piece together as well as dissect the exhibition’s longer than usual title: a string of seemingly random verbs, nouns and adjectives, it is based on three continuously cycling psychological conditions faced by individuals in social settings: agitation, pray, and keep calm. With some of the tangible elements in the title selectively presented - including galvanise, incense burner, and gradient - associations are extended for the other words in the title that are not visibly shown on-site. As such, the title presents itself as a selective glossary and Chou sets the viewer free to read into the objects what he or she will but provides from the outset some tools that may at once guide, inspire and deflect their relations to the installation.

Ultimately, Chou initiates through his presentation a new way of viewing your surroundings, of finding connections between feelings, things, places; a mode of perception based on weaving associations that applies to this exhibition but equally extends beyond to our broader understanding of the elements around us.