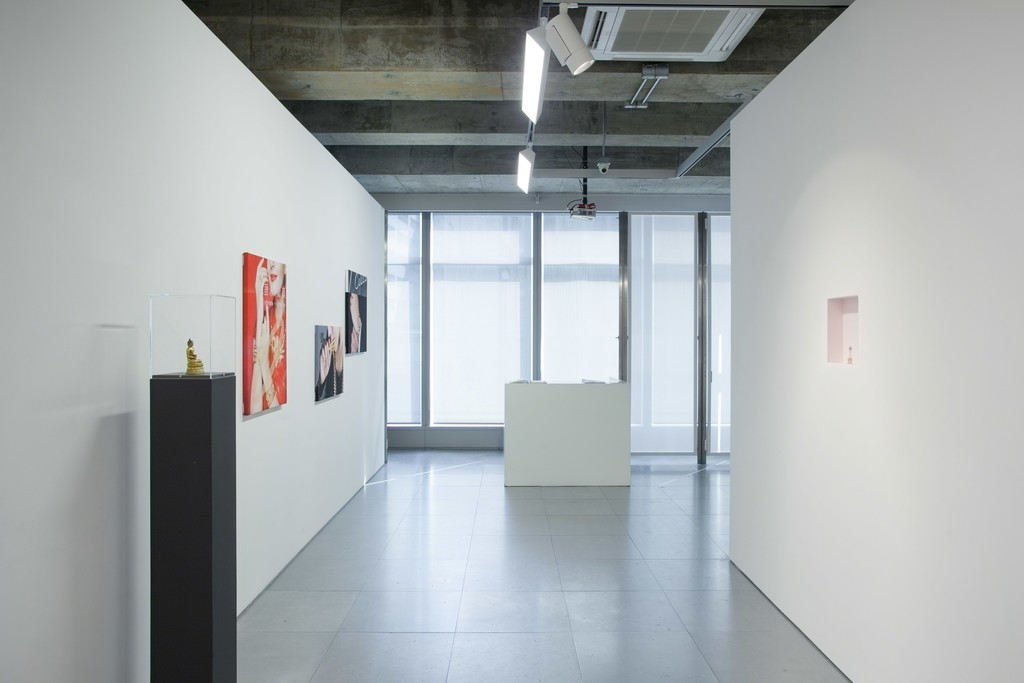 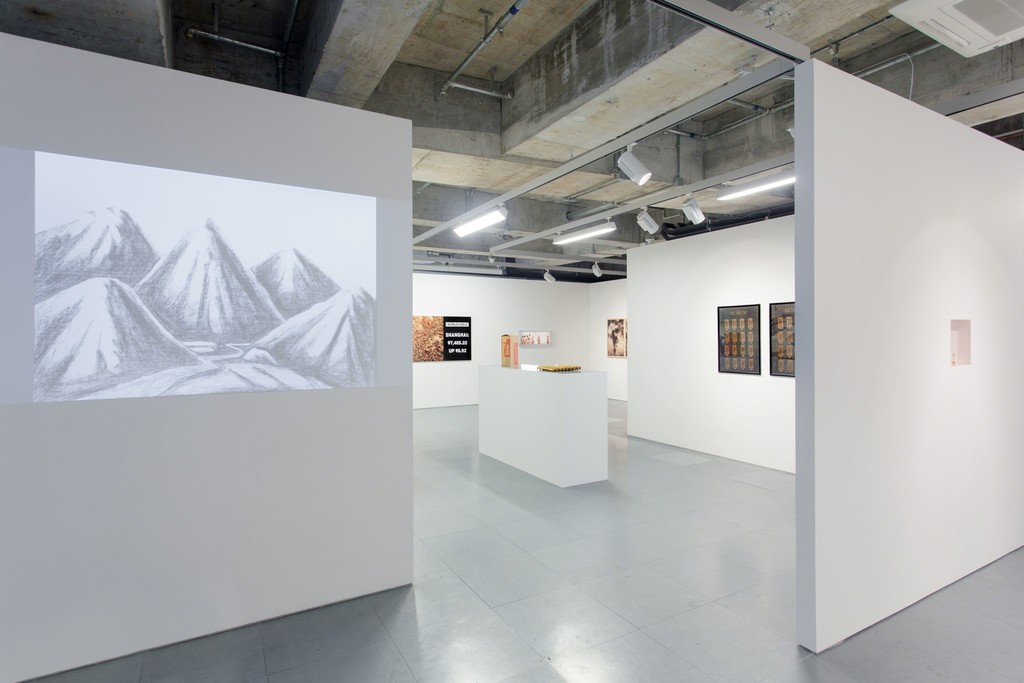 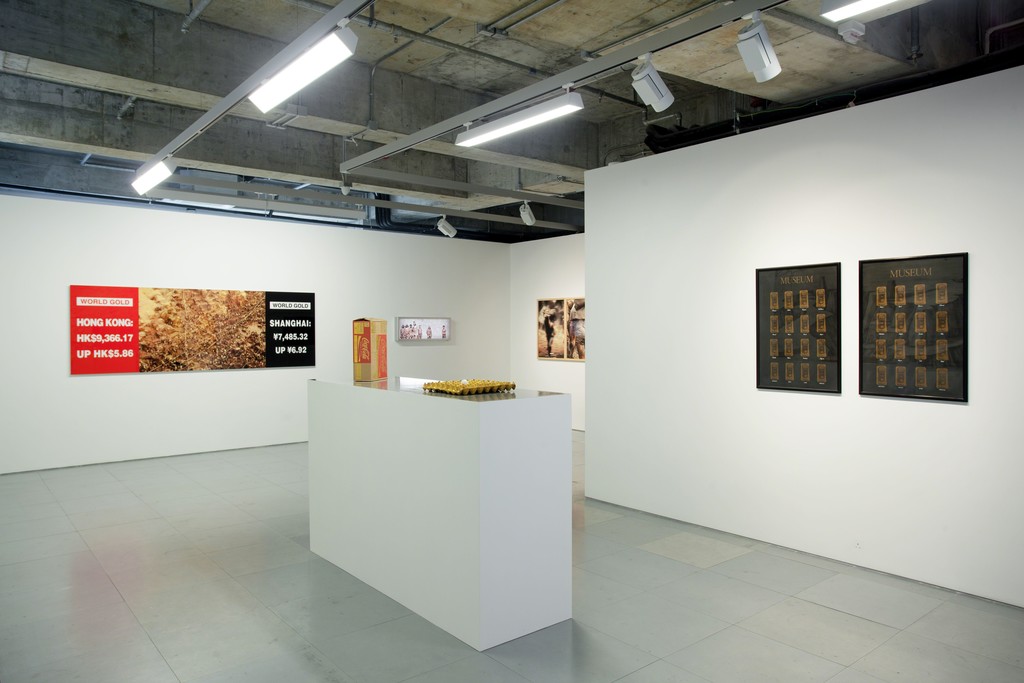 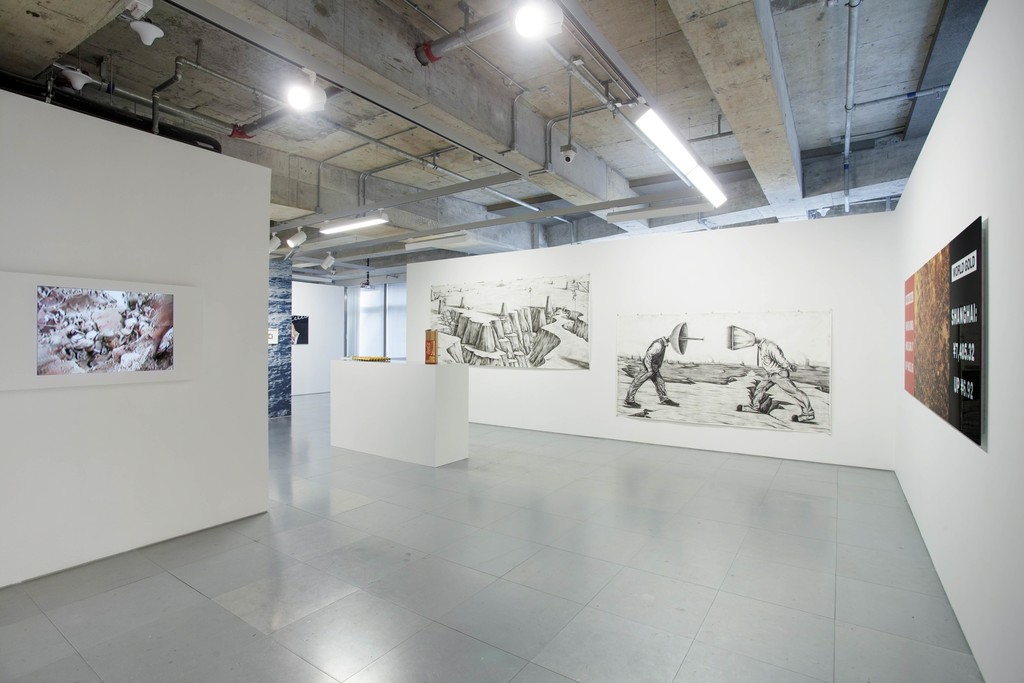 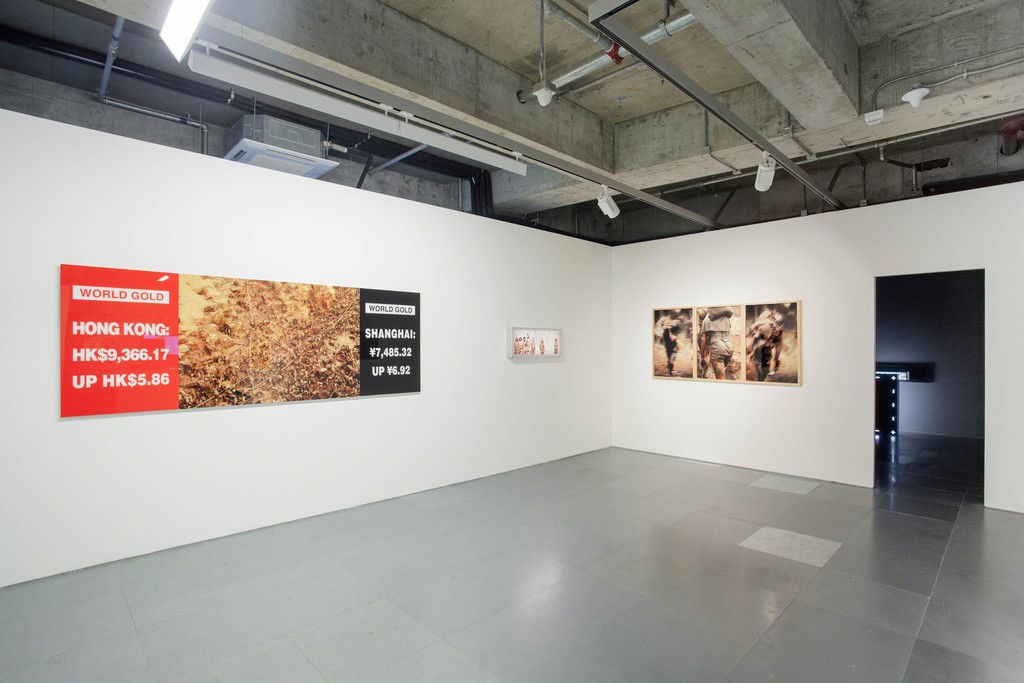 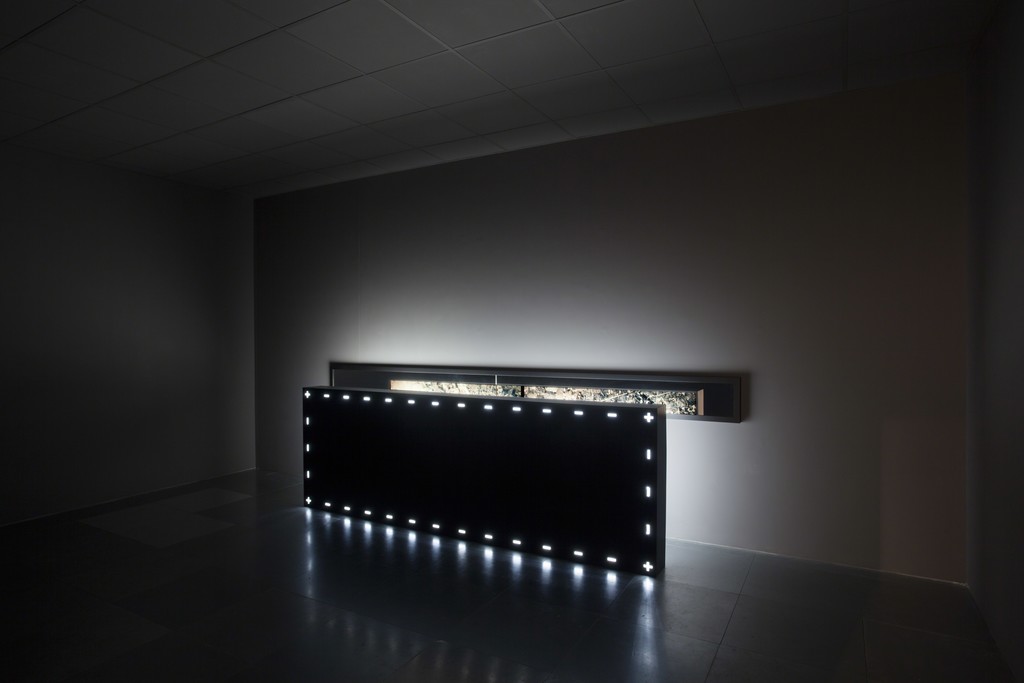 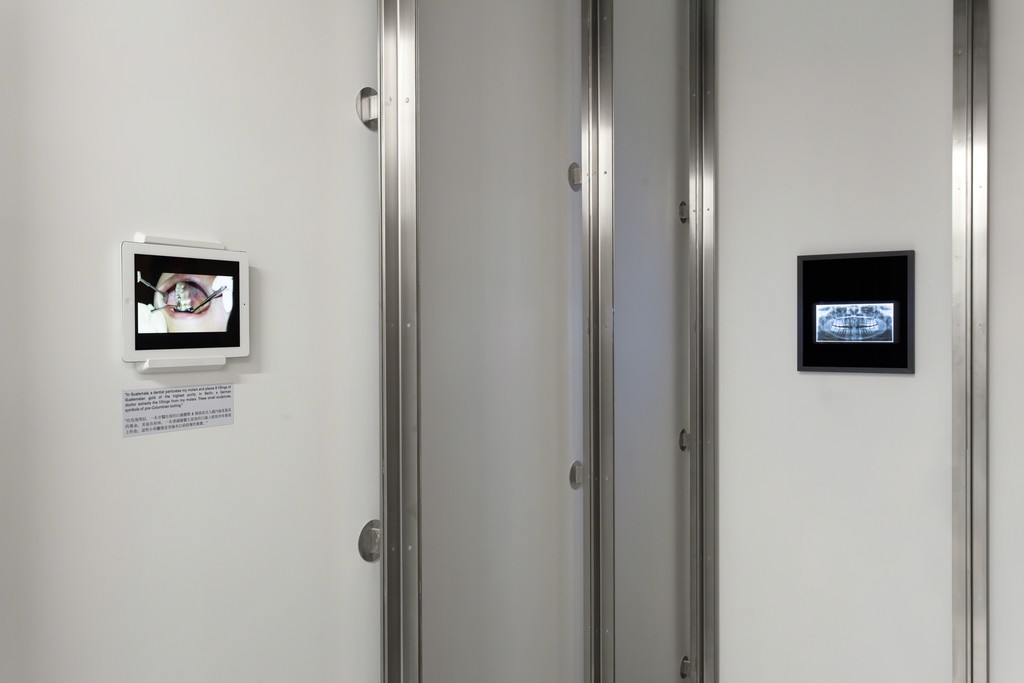 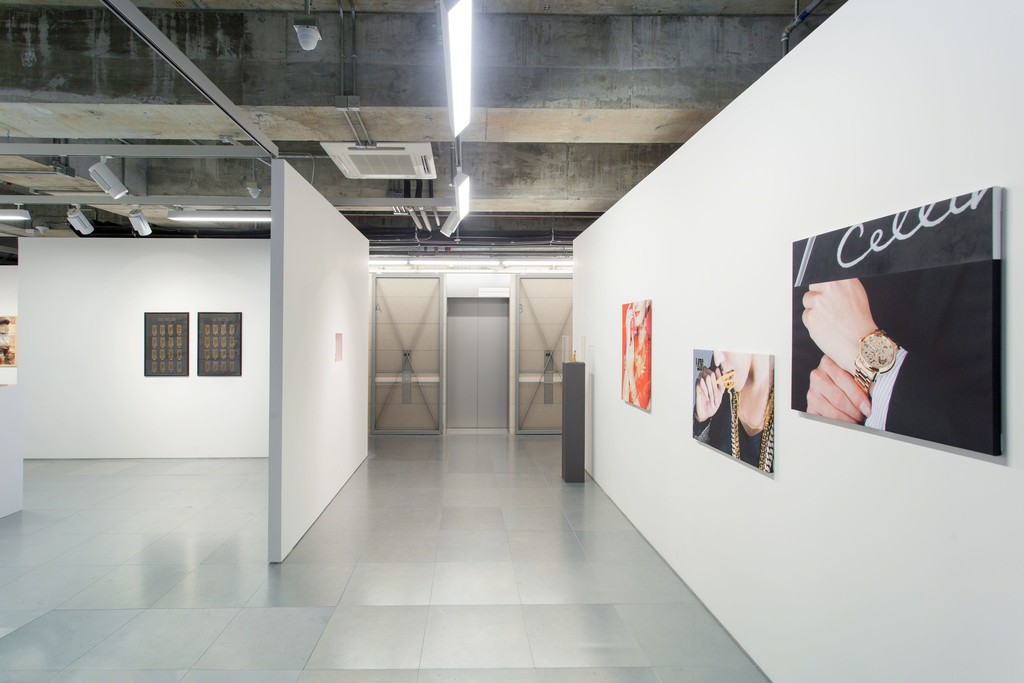 As part of its curatorial projects, Edouard Malingue Gallery is pleased to present ‘Clamour Can Melt Gold’, a group exhibition that addresses the representation, cultural value and economy around the extraction of gold. It brings together works by Marcel Broodthaers, He Xiangyu, Alfredo Jaar, Regina Jose Galindo, Kwan Sheung Chi & Wong Wai Yin, Sarah Lai, Prabhakar Pachpute, Danh Vo, School of Zanabazar. The show is curated by Inti Guerrero.

Gold has had an almost universal presence in the history of most societies as a symbol of wealth. It has also been regarded as one of the most trusted types of currencies, generally considered to be lacking the risks associated with paper money and other abstract currencies. In China and Hong Kong, gold has been a key element of traditional culture, its colour and symbols being widely represented as general signs of prosperity and good fortune. The major current market of golden jewellery in Hong Kong, catering increasingly to shoppers from the expanding Mainland Chinese middle class, is significant enough to influence general economic parameters, as seen in recent years.

The title of the show translates a Chinese idiom: 眾口鑠金. Having a moral dimension, it can be rendered as 'clamour can melt gold,' meaning that the voices of many people can confuse right with wrong. Legend has it that Sun Yat-sen used it regarding something being struck down by the majority. The exhibition presents two overlapping narratives. One addresses the gold market and the social representation of the value of gold. The other confronts the audience with the social complexities in the geographies related to the extraction of gold. The violence and inequalities associated with gold mining are often forgotten or overlooked in the markets of its consumption.

For the exhibition, Sarah Lai (b. 1983, Hong Kong) produced a new commission responding to the choreographed politics of representation in high-end jewellery advertisements. Her observations on the relationship between depicted object and gesture, flesh out centuries-old notions of value and the anxieties of consumption in today's democratization of luxury. Shown closely to her work is an authentic late 17th century Mongolian sculpture from the School of Zanabazar. The golden figure is characteristic of a style depicting various Buddhist subjects, which has been highlighted by art historians as showing a high degree of individual artistry. It has contributed to the domestic adoration of golden statues and to the proliferation of Buddhism.

In radical contrast to this, the show includes a significant body of work by Alfredo Jaar (b. 1956, Chile/US) on Serra Pelada, an open cast gold mine in northeastern Brazil. The artist visited it in the mid-1980s and subsequently produced works that translate the inherent paradox between the high prices of gold in the global market and the abject and primitive conditions around its extraction. Through a different aesthetic and speaking from another geographical standpoint, Prabhakar Pachpute's (b. 1986, India) newly commissioned drawings also depict mining, as well as the forces of capital and human costs involved. His distinctive iconography of charcoal figures also questions the mining's impact on the landscape.

Another segment of the exhibition revolves around the real and metaphoric value of gold. It features a seminal 1970s piece by Marcel Broodthaers (1924–76, Belgium) from his Musée d'Art Moderne, which challenges the logics of the market by resignifying the value of gold bars in relation to the price of canonical Western artists and global trade commodities. Echoing Broodthaers' critique and playfulness with gold as a signifier of wealth are the sculptural pieces by Danh Vō (b. 1975, Vietnam/Denmark) and He Xiangyu (b. 1986, China) respectively, who apply gold to consumer goods and basic groceries. In the case of Kwan Sheung Chi (b. 1980, Hong Kong) & Wong Wai Yin's (b. 1981, Hong Kong) project on display, institutional critique, or rather the critique of institutions—to the economy to the government etc. – also uses the value of gold but simultaneously brings about a moral question regarding Hong Kong’s current vulnerable citizenry.

In an intimate space towards the gallery’s exit, visitors are drawn to the documentation of a performance by Regina Jose Galindo (b. 1974, Guatemala), strongly questioning the historical looting by European colonial powers of the wealth accumulated by pre-Columbian societies in the Americas. Although carried out by a single body, that of the artist herself, it carries the historical weight and exploitation of an entire continent that for centuries has accompanied the extraction of gold.