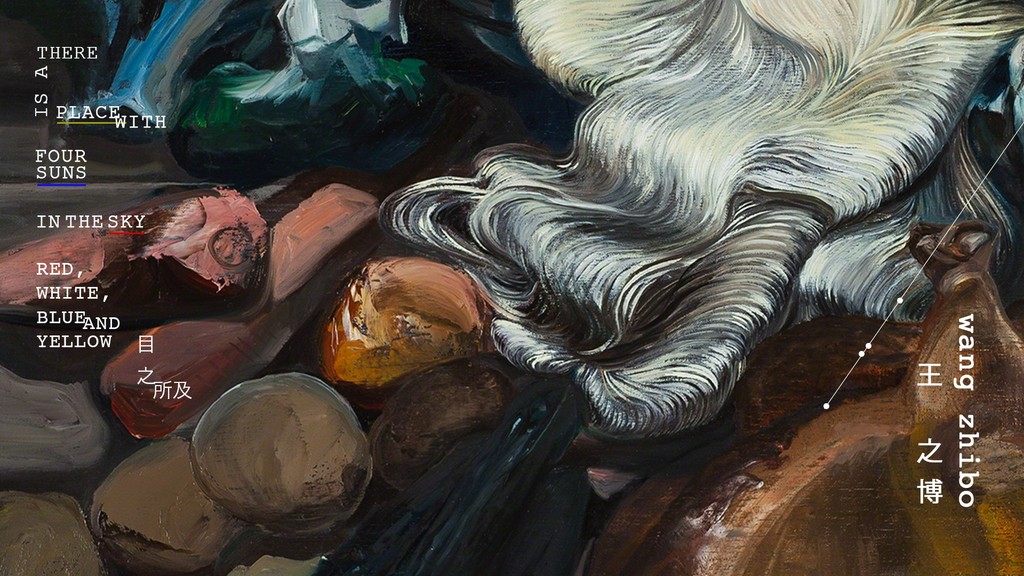 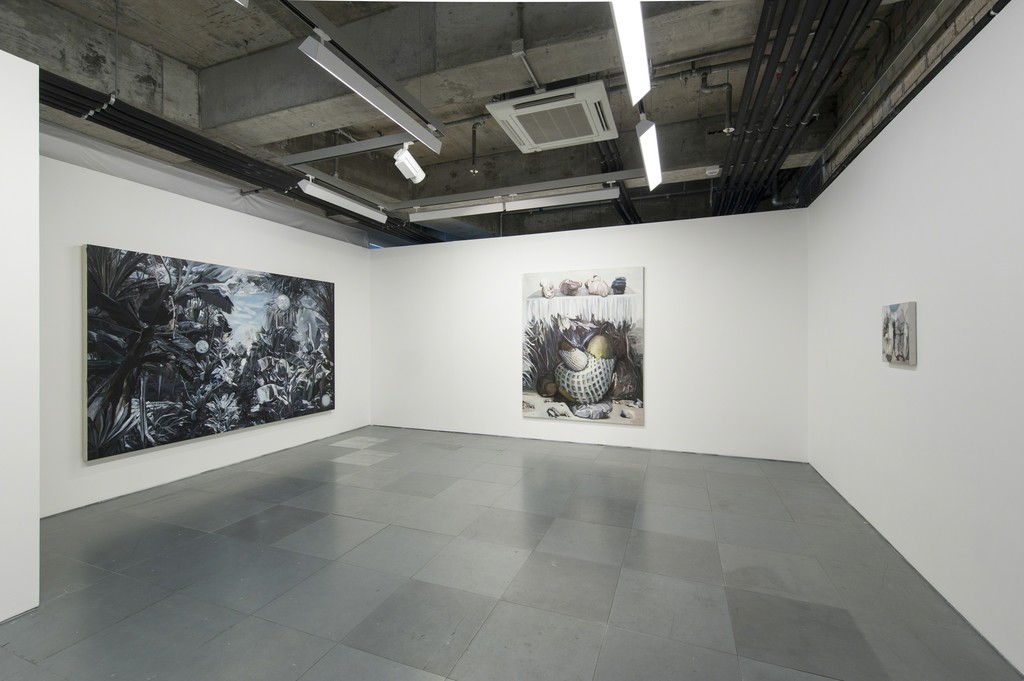 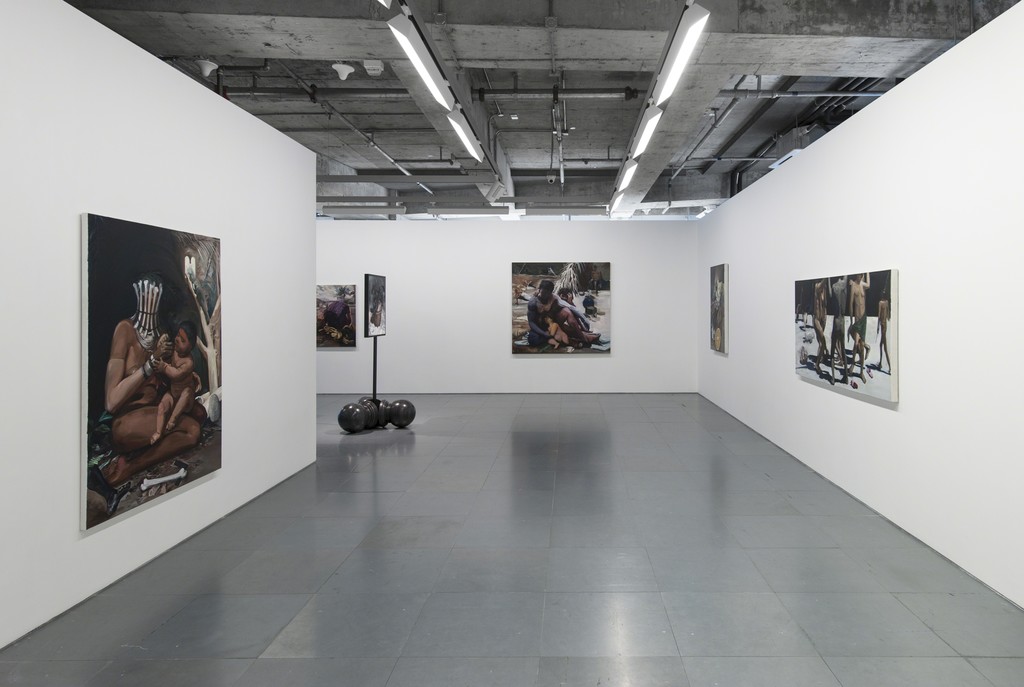 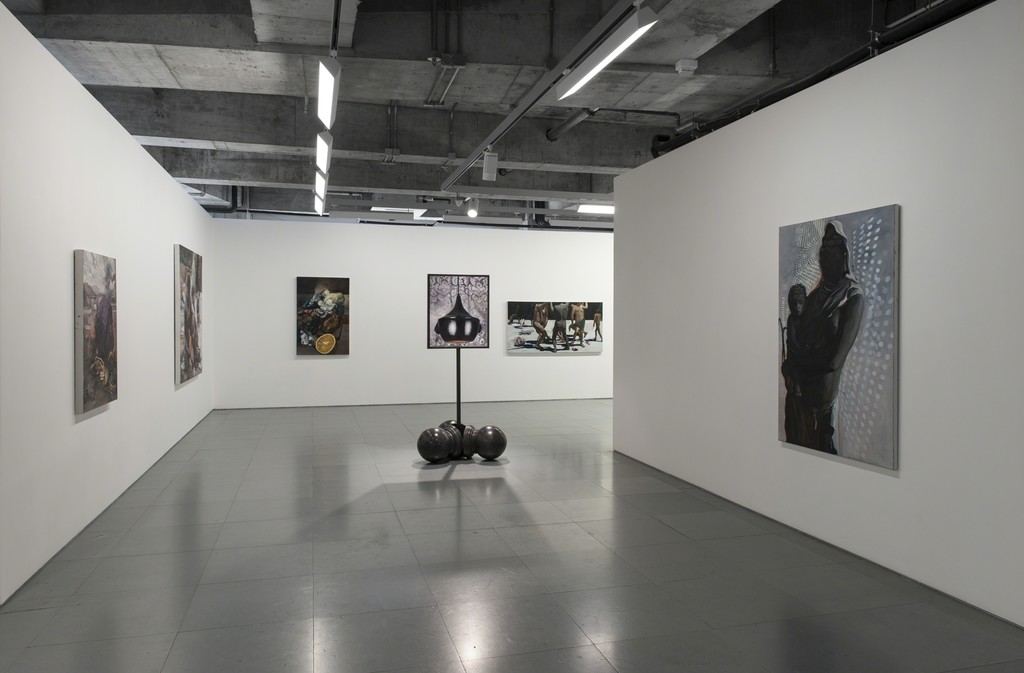 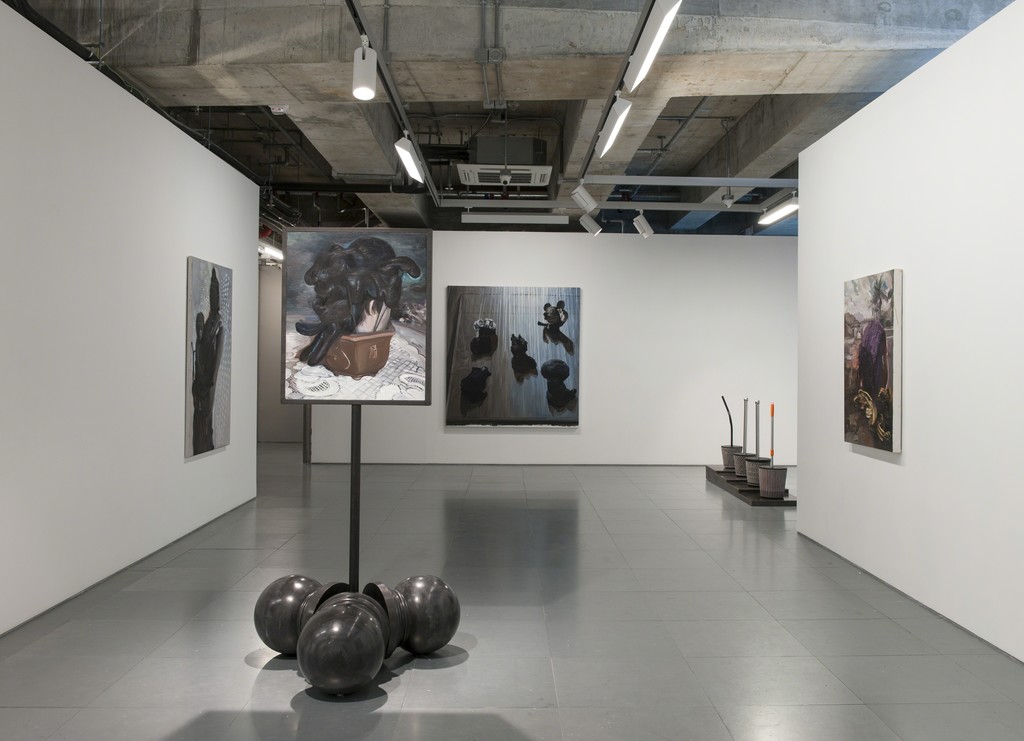 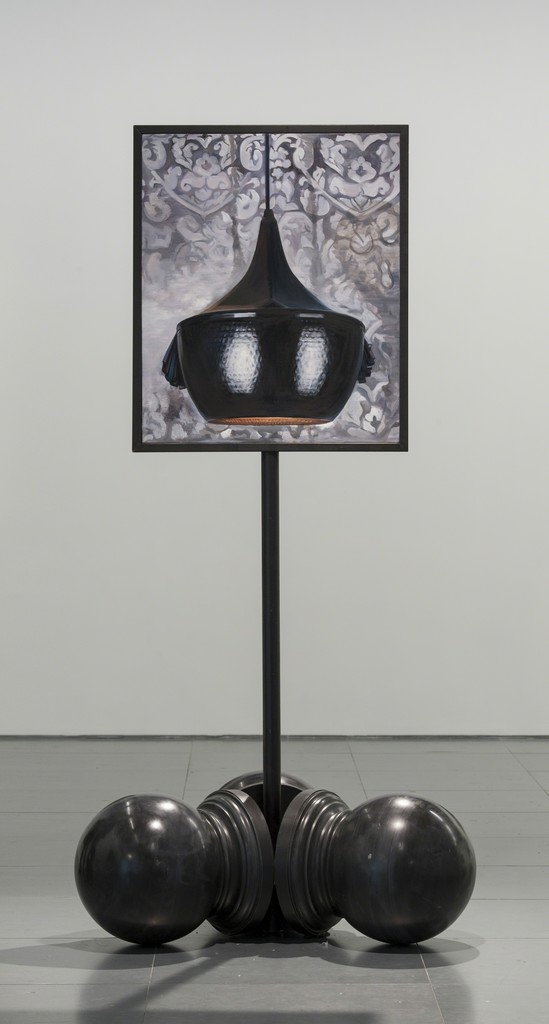 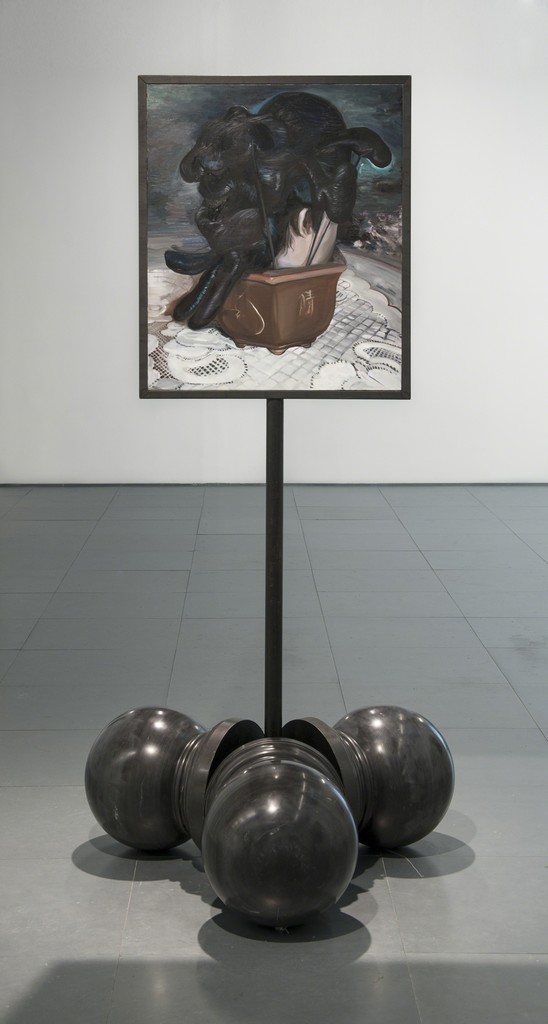 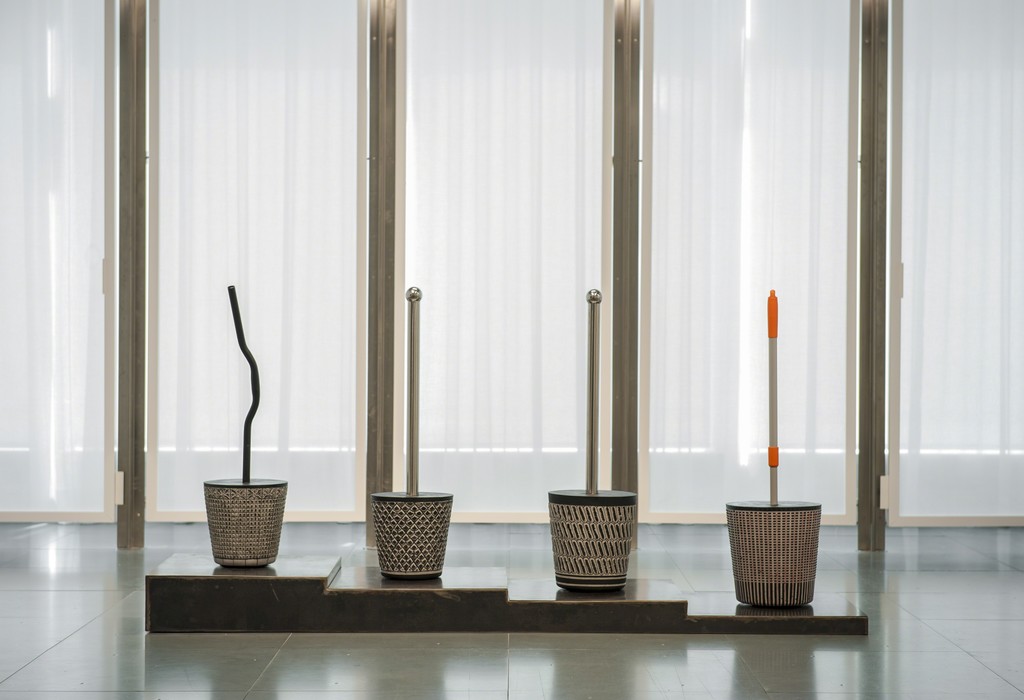 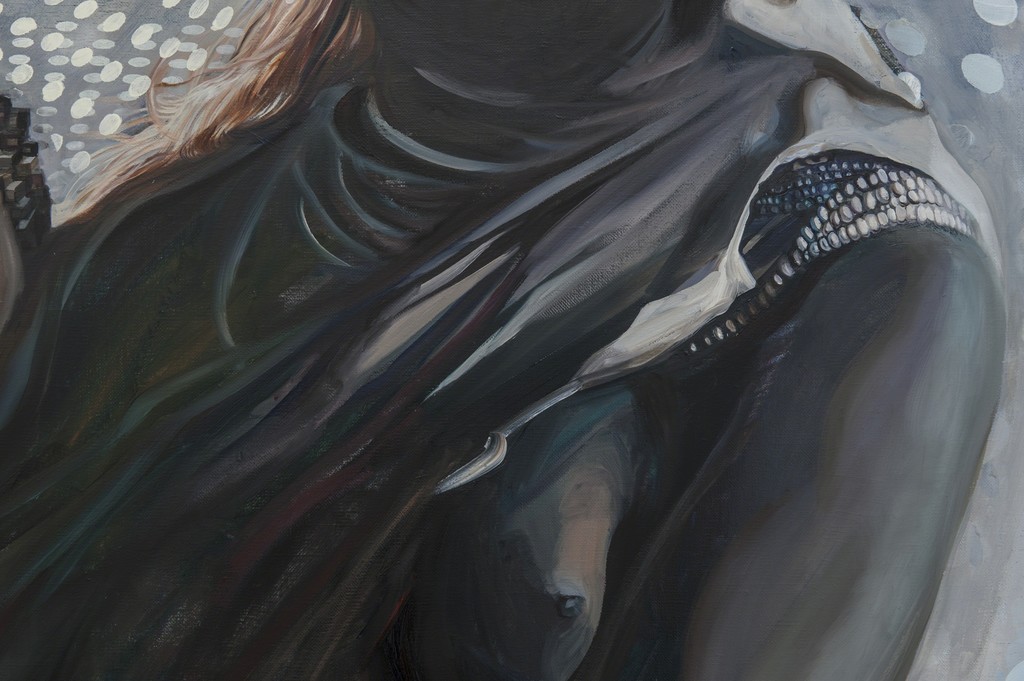 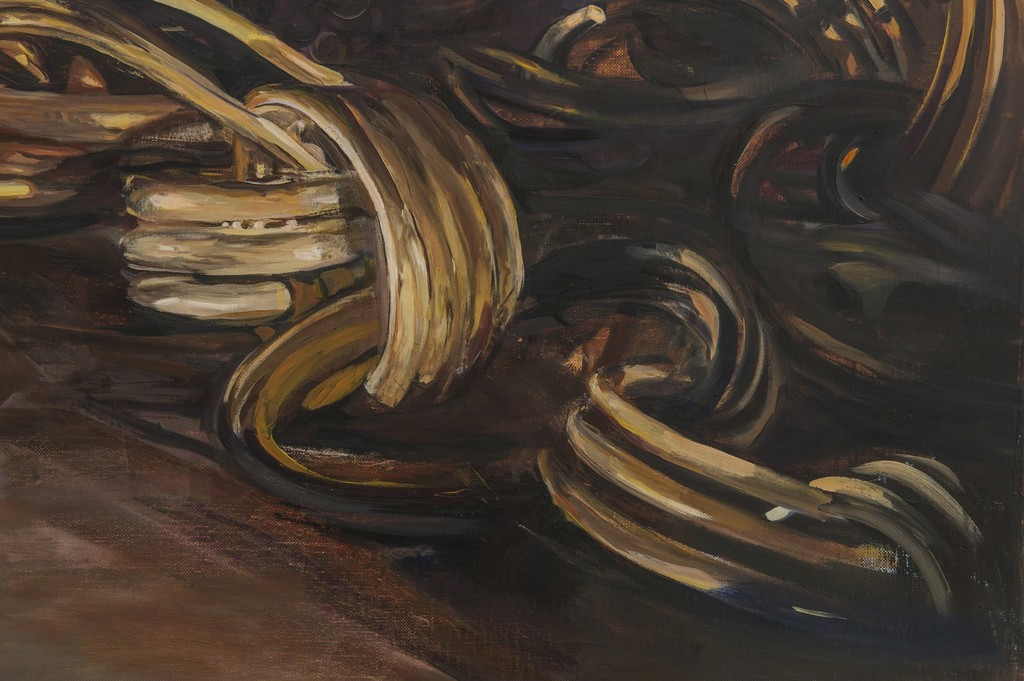 Tropical sceneries that appear to scintillate; an amalgamation of distorted vegetables; the blurred vision of a seated mother and child - each are running explorations in Wang Zhibo’s (b. 1981, China) solo exhibition at Edouard Malingue Gallery ‘There is a place with four suns in the sky - red, white, blue and yellow’, which takes its titular inspiration from a line in Carl Sagan’s seminal 1973 book ‘The Cosmic Connection: An Extraterrestrial Perspective’ that relates to the spectacular cosmos. Focusing on the possible existence of more advanced civilisations and their distribution across our local galaxy as well as the universe, the text pins Wang’s interest in extending space and time as far as possible whilst integrating these spectrums amidst the trivial.

A graduate from the China Academy of Art Oil Painting Department in Hangzhou, Wang treats the medium of oil on canvas as a crucial player in her aim to confound our temporal and spatial notions. Transcending traditionalism through the subject matter depicted, which is both curious and challenging, Wang channels her painting to represent the variances of our visual experiences, “similar to the reflection on the surface of water: capable of capturing the multiple manifolds of a subject.” [1] What is represented is a synthesis though, a more accurate portrayal of the actual; in relation to the cosmic - a wormhole. Indeed, as described by Wang, “the variations of dots, lines, contours, paints, impasto, light rendering, colours and shadows… facilitate the poetic representation of reality.” [2]

The grand panoramic work ‘Rise, Fall’ (2016), for example, depicts a dewy and nearly spectacular tropical landscape. Dotted by hovering spheres that in themselves resemble planets, the painterly finish hints to illusions, a magical environs, a sentiment that is heightened by the rising mist. Albeit a different subject matter, ‘Summer Kitchen’ (2016) extends Wang’s consideration of associations. Depicting multiple vegetables including a roasted chicken, the painting at first sight appears as a classical still life of preparatory items for a meal. Upon closer inspection, however, there is a deliberate associative distortion as well as several unidentifiable objects, which consequently skew our perception. ‘Swaddling’ (2016) follows from this, presenting various wrapped vegetables under a ledge; recognisable items, their placement and display takes on a bodily association: hanging, balancing, piled, positioned.

Moving from environmental and domestic renderings, Wang equally presents an array of people; rather than immersing herself amidst them though, she takes an observational, anthropological stance, seemingly capturing a tribal set - indistinctly from the past, present or future - from afar, as they engage with daily activities, from washing utensils, ‘Last Man’ (2016), to seemingly ritualistic dancing, ‘Dancing is Better’ (2016). Despite these paintings’ references to human presence, however, one notes that each is crucially devoid of human expression. ‘Mother and Son’ (2015), for example, transplants a classically religious composition. Yet, the setting is distinctly ethnic with various skulls scattered upon the floor and both figures being adorned by bead-like wooden jewellry. More importantly, whilst the mother’s face is delineated, the child’s is unnervingly blurred to the extent of resembling defacement. Such vigorous anonymity heightens our consciousness of how much is read through facial features, expressions, the very characteristics that distinguish each and every one of us.

Ultimately, these works present a new vein in Wang’s practice, moving between time and space, challenging our understanding of what constitutes daily life. From the spaces we could inhabit, the items we may eat, to the rituals we perhaps share with others, Wang provides through her exhibition a portal into another mode of living, a fully-formed set of life, which is distinct yet not utterly dissimilar to our own. Invited voyeurism, we are urged to view, discover and understand another, which may or may not be of this world, or indeed universe.

Wang Zhibo is a highly regarded female Chinese painter who rose to prominence after being awarded the prestigious national Luo Zhongli Scholarship in 2008. Wang’s work has since been exhibited from Hong Kong to New York, including exhibitions at the Penrith Regional Gallery, Sydney; Chongqing Art Museum, Chongqing; Today Art Museum, Beijing; Museum of Contemporary Art, Taipei. Wang was selected as one of the top female Chinese artists to observe and featured by writer Luise Guest for her book on female Chinese artists ‘Half the Sky’ published in 2016.