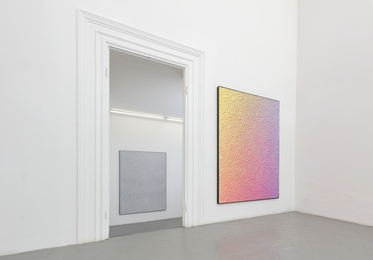 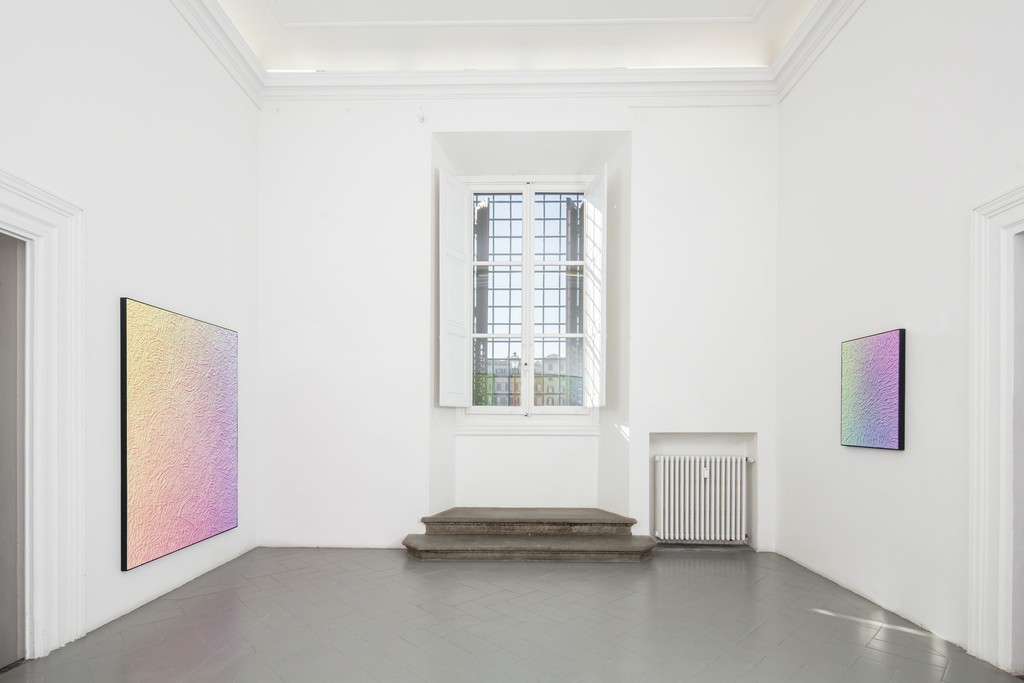 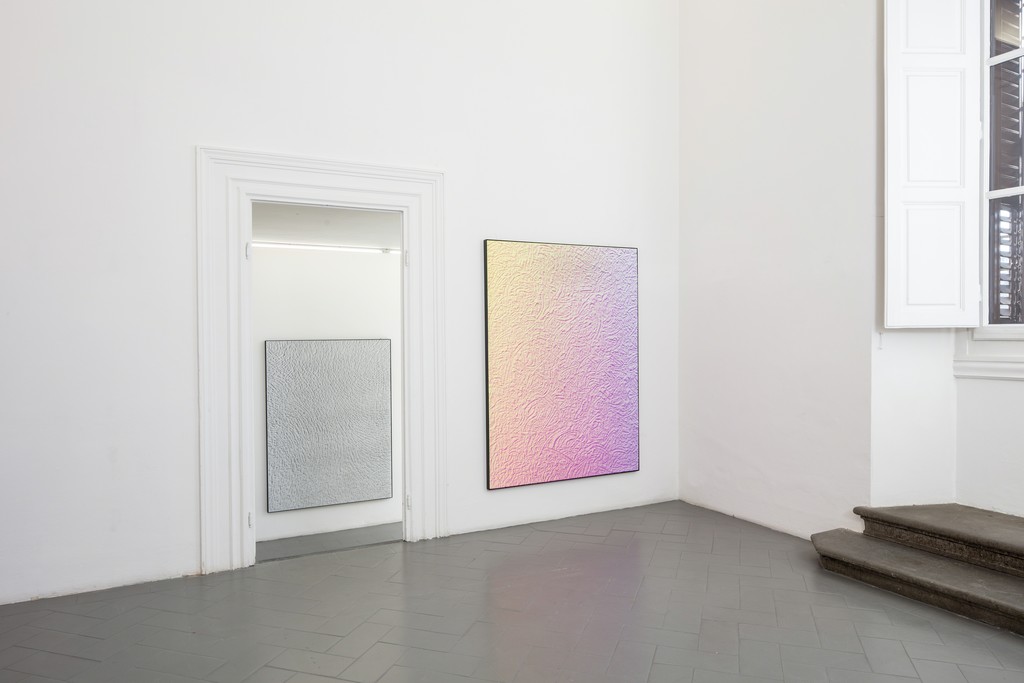 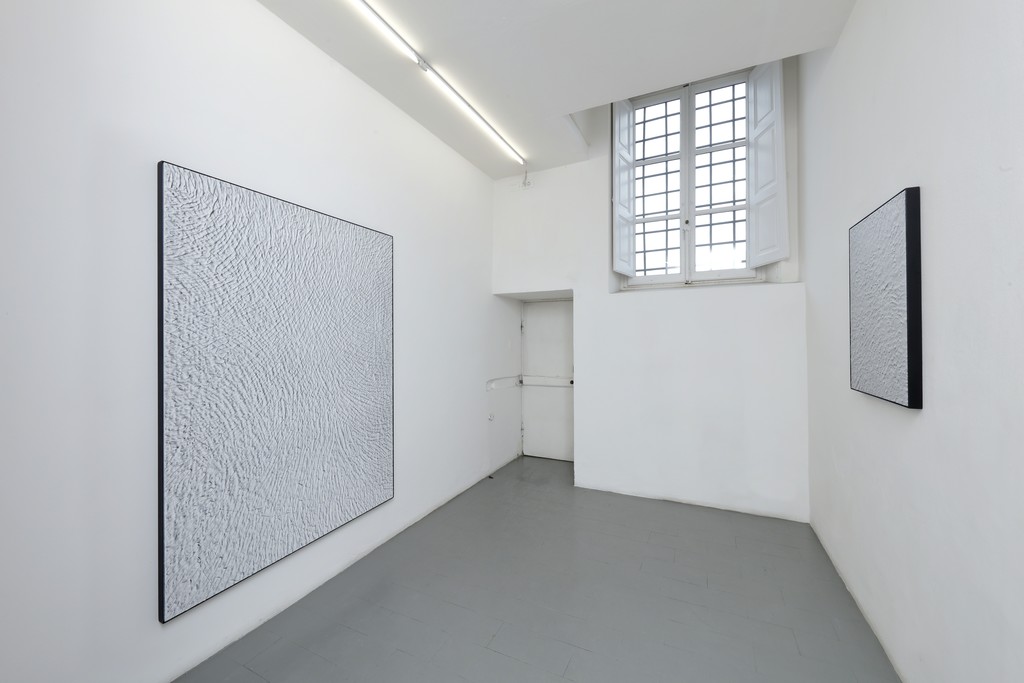 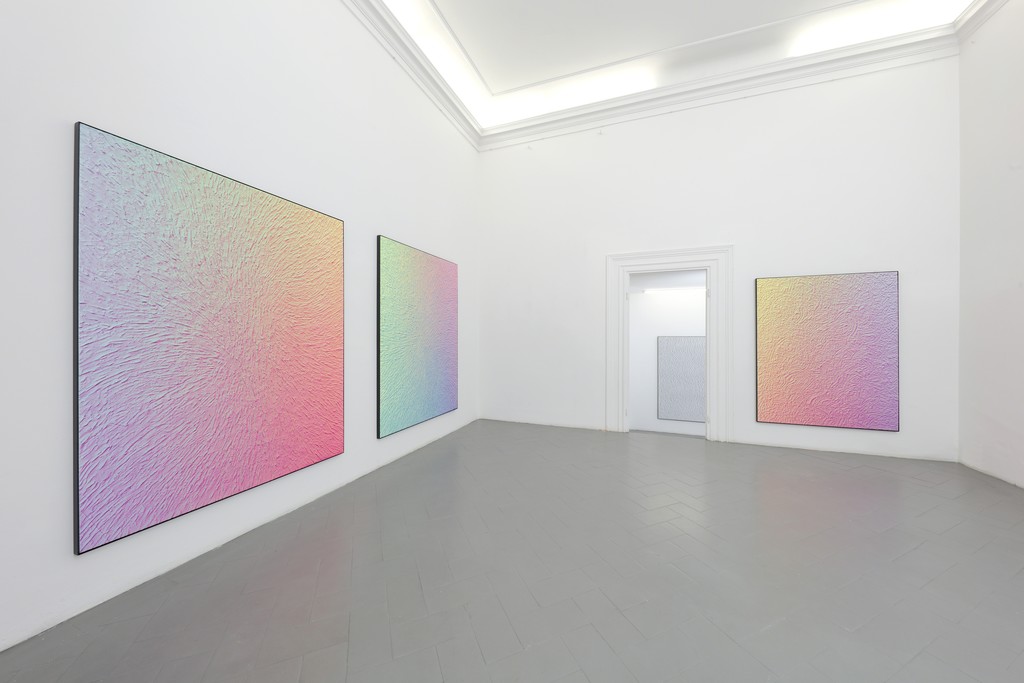 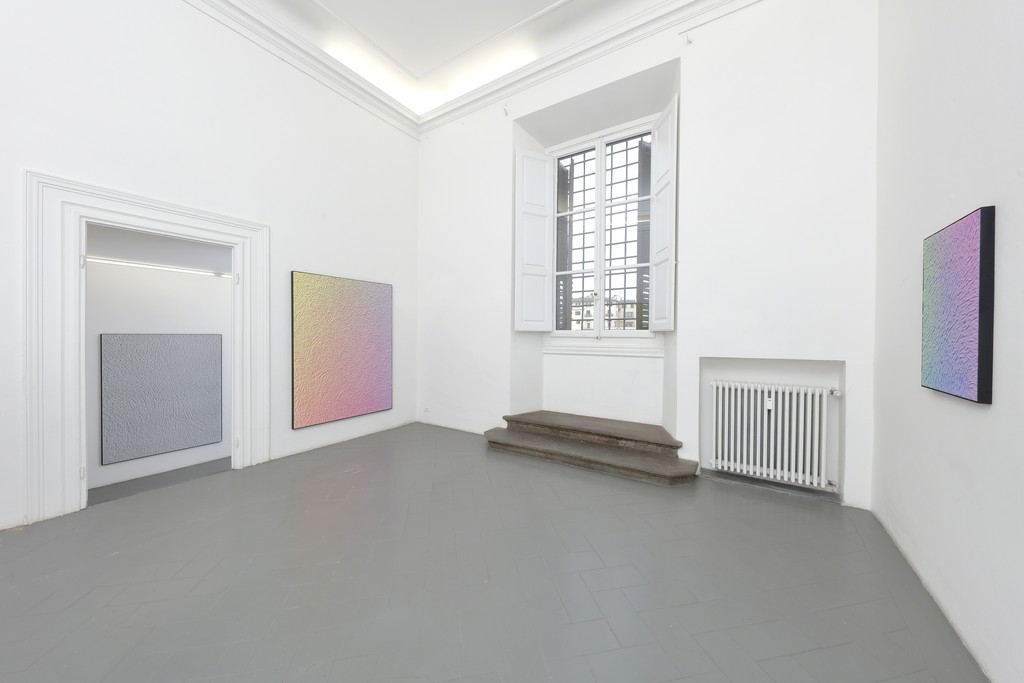 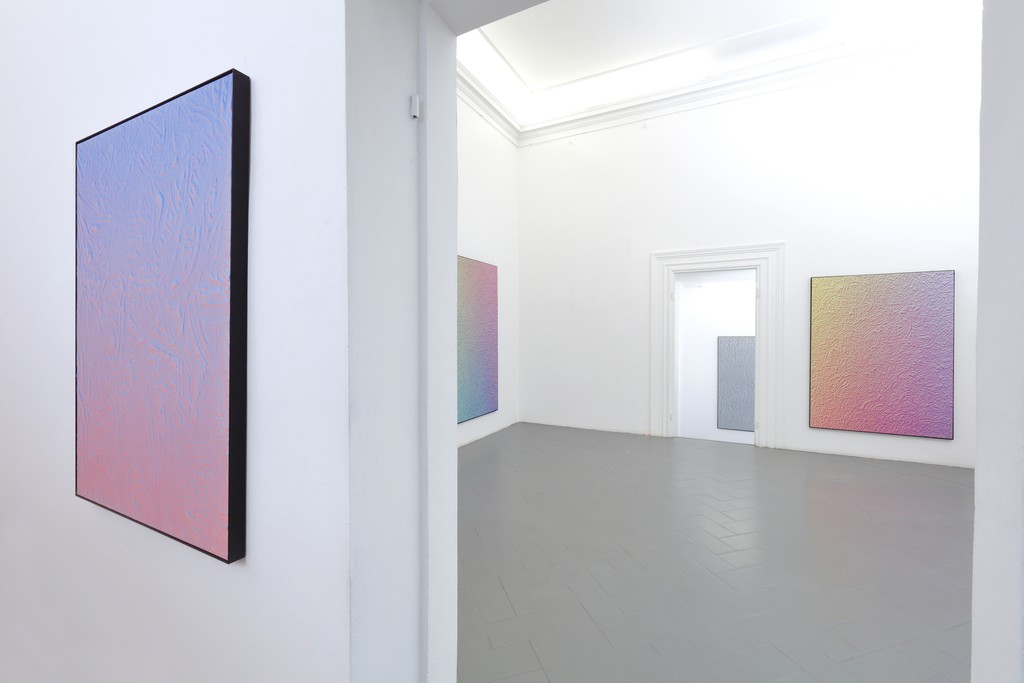 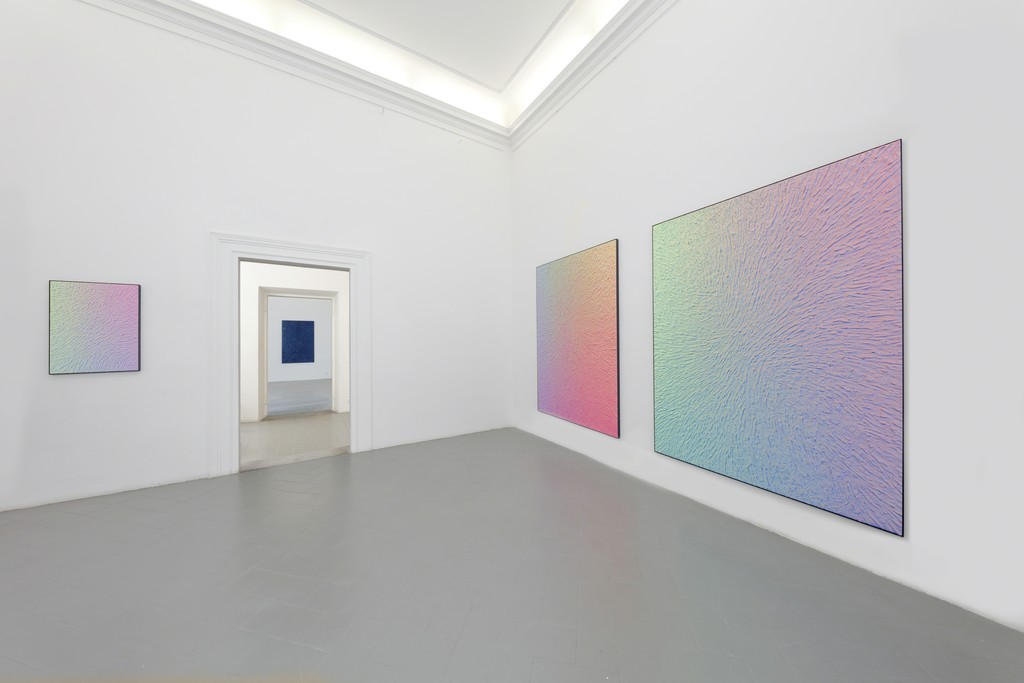 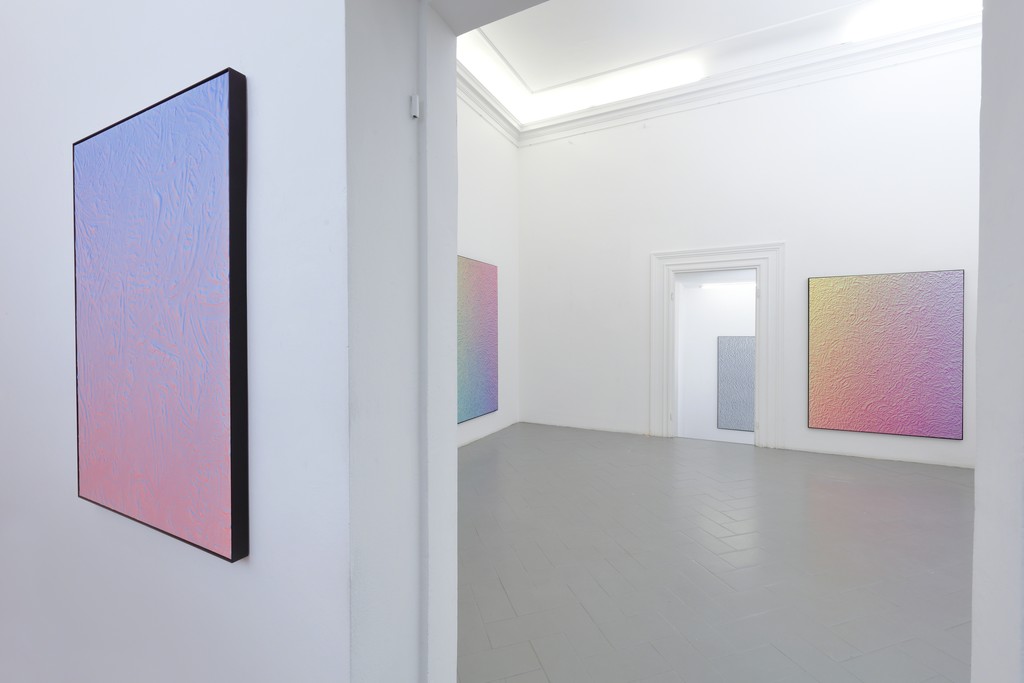 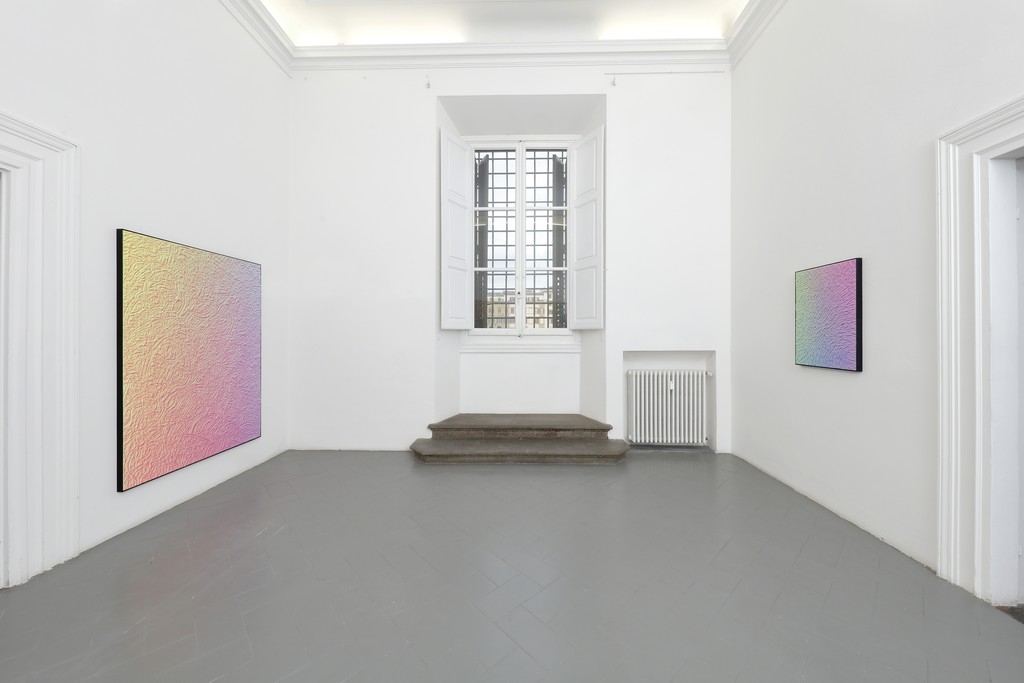 FICTIONS aims to investigate the issue concerning the emphasis on what happens to a traditional form of image-making when it enters a digital framework, with a strong interest in the mediation that an artwork undergoes when it is consciously documented, investigated and distributed using digital technology. Both Richard Dupont and Michael Staniak are deeply involved in the question of truth, between the erasure of truth in itself and the revelation of a new aesthetic code, which is still in the process of being defined according to the virtual constellation of infinite possibilities.

On one hand, this exhibition will debut a new body of work that Dupont has been developing over the past year. Infusing raw canvas with chemicals used primarily in cyanotype photography, these new works achieve their deep blue color in the sun as the sensitized canvas undergoes a chemical reaction. The resulting hybrid between painting and photography has metaphysical overtones, as the presence and absence of an image simultaneously converge.

The exhibition will focus on a series of new works derived from radiography scans of several other artworks, which were first downloaded as digital files and then manipulated by Dupont, before being printed on large films and then, finally, transferred via the process to canvas.

The exhibition will consist of a central room with four new, large-scale works, all titled “Untitled Drawing c. 1953”. These works have Robert Rauschenberg’s proto-Conceptual artwork, “Erased de Kooning Drawing”, as their starting point. Visibility itself is examined in these new painting/photo hybrids. While researching for the new series, Dupont came across an infrared scan of “Erased de Kooning Drawing”, which had been created by the Elise s. Haas conservation department at SF MOMA. The scan reveals some aspects of what had been erased. The conjuring of the invisible drawing reframes the gesture of erasure via the scan process. Dupont downloaded this image and imported it into photoshop, where further attempts to reconstruct the erased marks were made.

It is unclear which elements of these new works are recovered de Kooning marks, and which, instead, are digital manipulations by Dupont. The digital file generated by the scan further obfuscates Rauschenberg’s radical non-gesture, as the erasure is itself erased-replaced by an infinitely corruptible digital code.

The Michael Staniak’s new paintings, all titled under the series “HDF”, are an extension of his investigation into the effects that digital media has on the production and viewing of painting. Utilising various materials, including a custom-made casting compound and acrylic paints, textured layers are built up over time using both finger gestures and random studio tools. The resulting surfaces are a record of an organic, painterly process, which then undergo a slow application of hand-sprayed colour that achieves a trompe-l’œil effect. This, at once, flattens the gestures and produces an image that seems digitally mediated.

The letters HDF are an acronym for Hierarchical Data Format, digital file extension used mostly in satellite data and imagery gathering in order to extract multiple points of information from a single digital image. This is reflective of the way we view most of our world via the mediated digital lens, where oftentimes more truths about an image can be revealed using new technologies. At the same time, the screen can hinder our understanding of physical reality; we question the truth value of edited images that can often have a flattening effect on the physical subject. Staniak’s paintings are demonstrative of both these phenomena - his gestures are heightened in saturated color or contrasted in a facsimile-like monochrome; yet the gestures themselves are hidden and revealed only between painterly layers of visual data flattened by a process that renders the works to appear more digital.

Michael Staniak (Melbourne, 1982) earned a BFA and an MFA from the Victorian College of the Arts, Melbourne as well as a BA from Middle Tennessee State University in Digital Media Communications. He has had solo exhibitions at the Contemporary Art Museum, St. Louis; Annarumma Gallery, Naples; Station Gallery, Melbourne; and Steve Turner, Los Angeles. His work has been included in group shows at the Moving Museum’s Istanbul project, the Centro Cultural Sao Paulo and Kunsthalle Vienna. The Contemporary Art Museum, St. Louis published a monograph of his work in 2017 titled IMG_, and he has been featured in many publications including Artforum, Flashart Italy, Vault Australia and Leap Beijing. In 2018, he will be undergoing a residency at Fogo Island Arts, Canada.