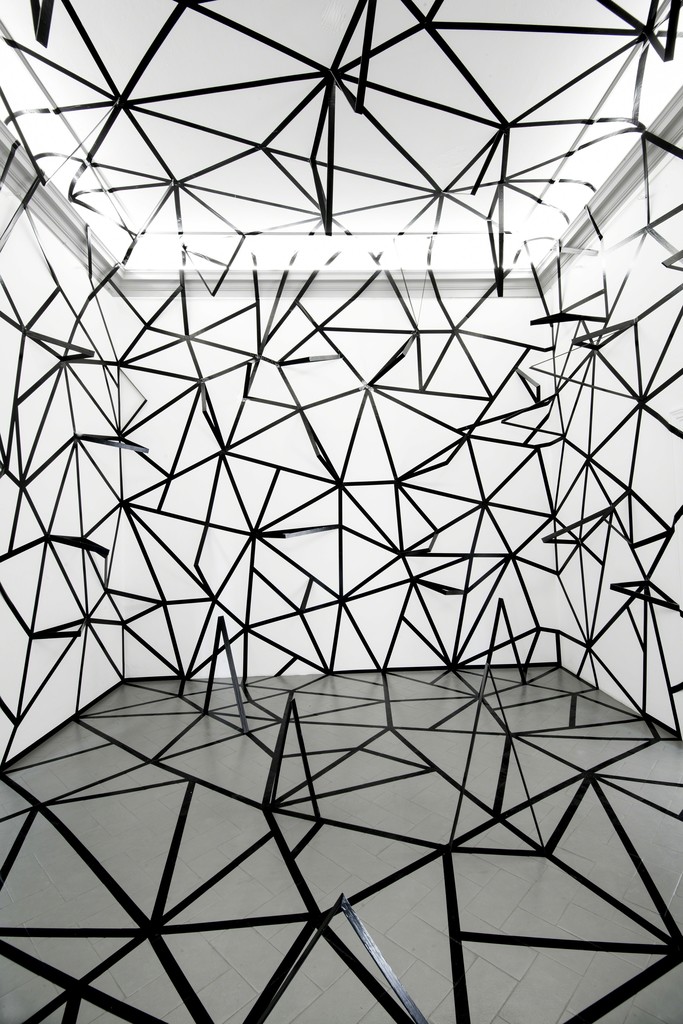 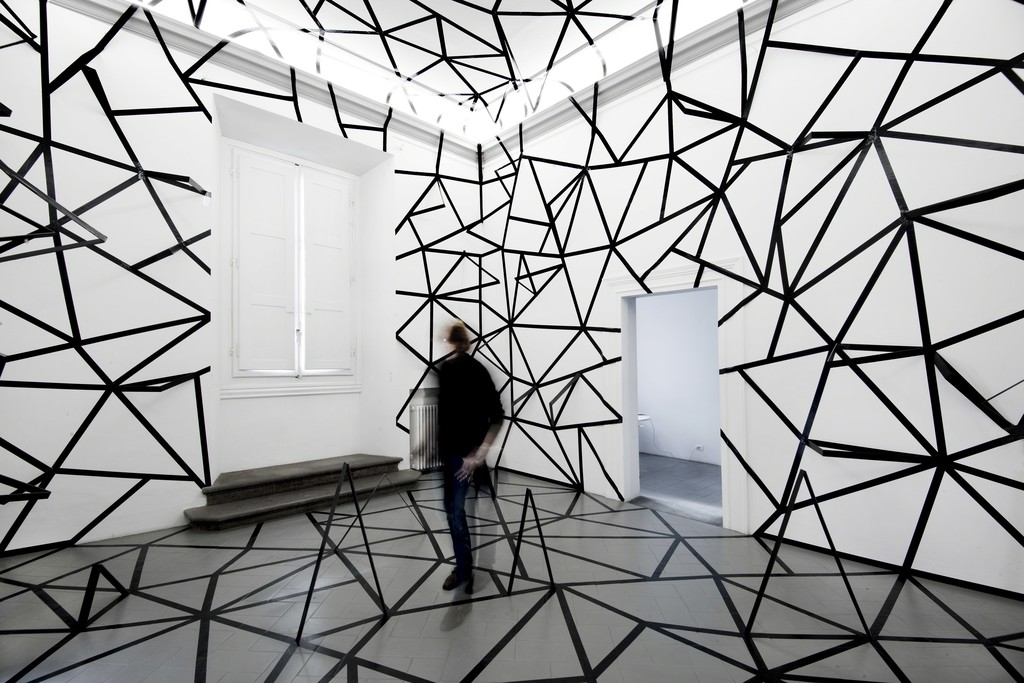 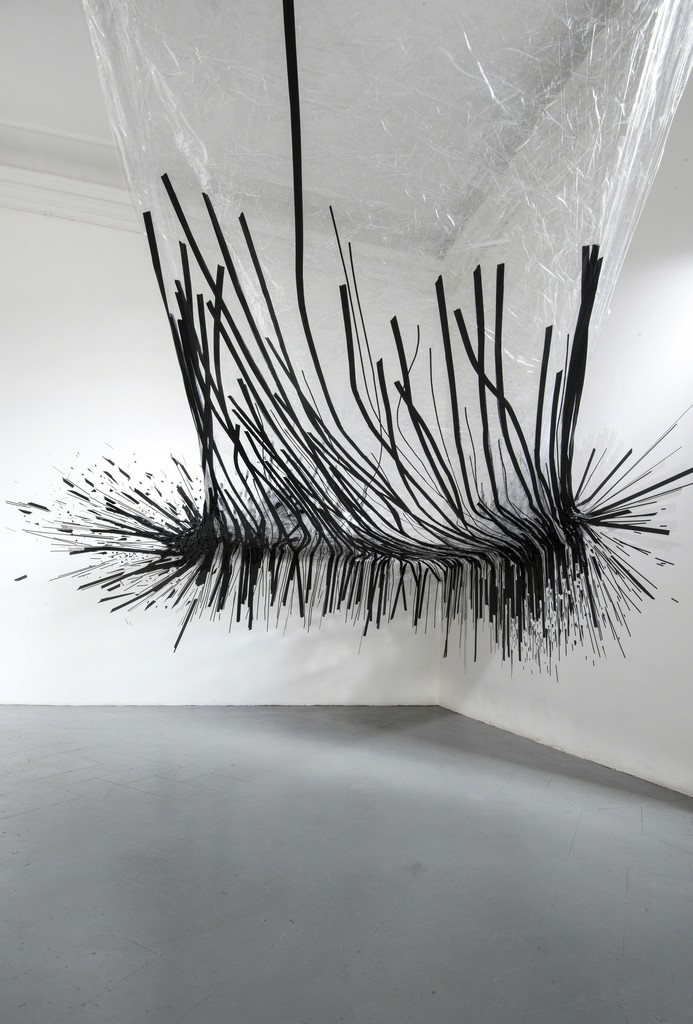 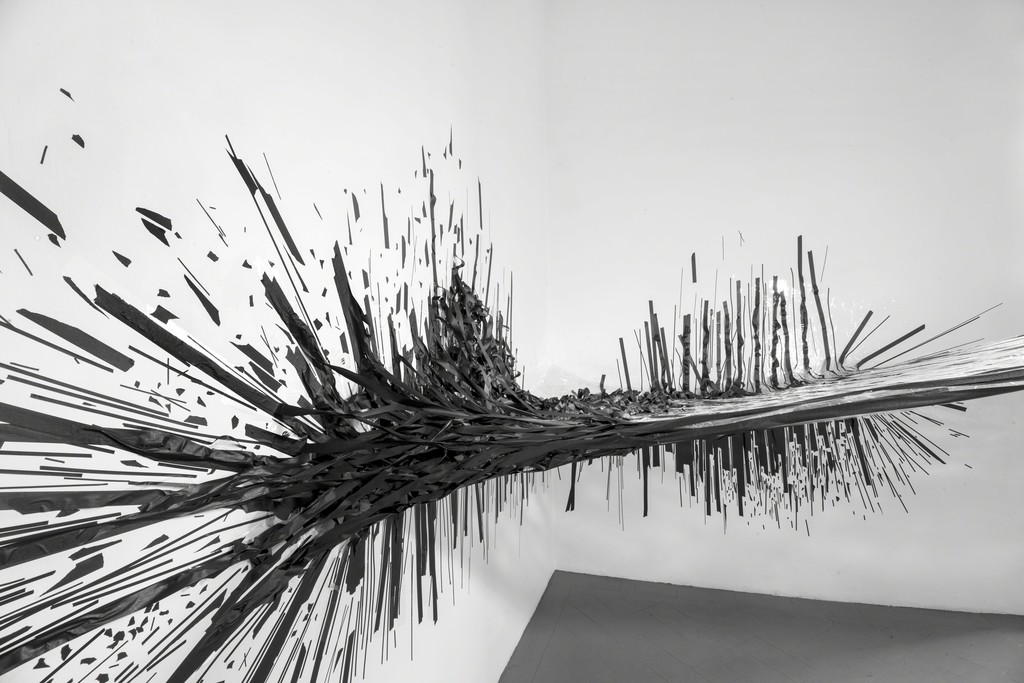 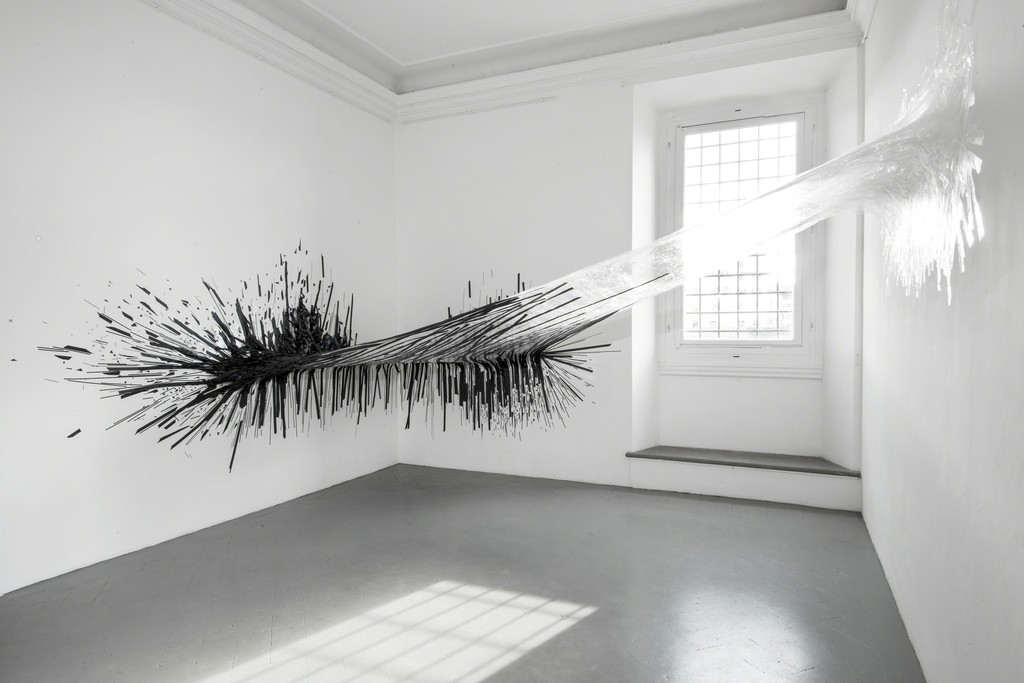 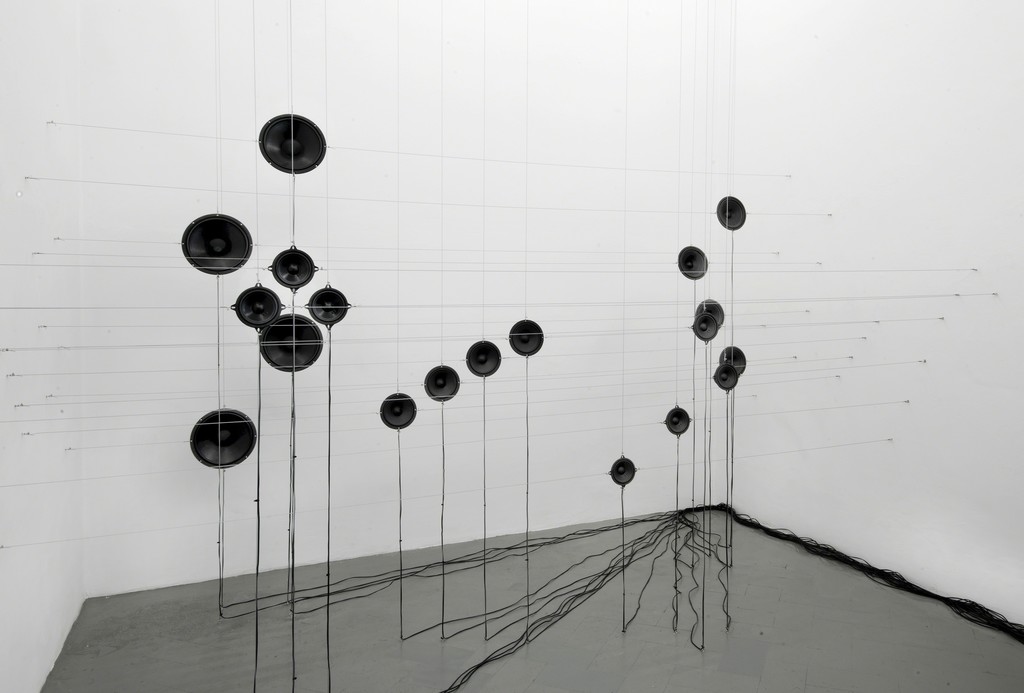 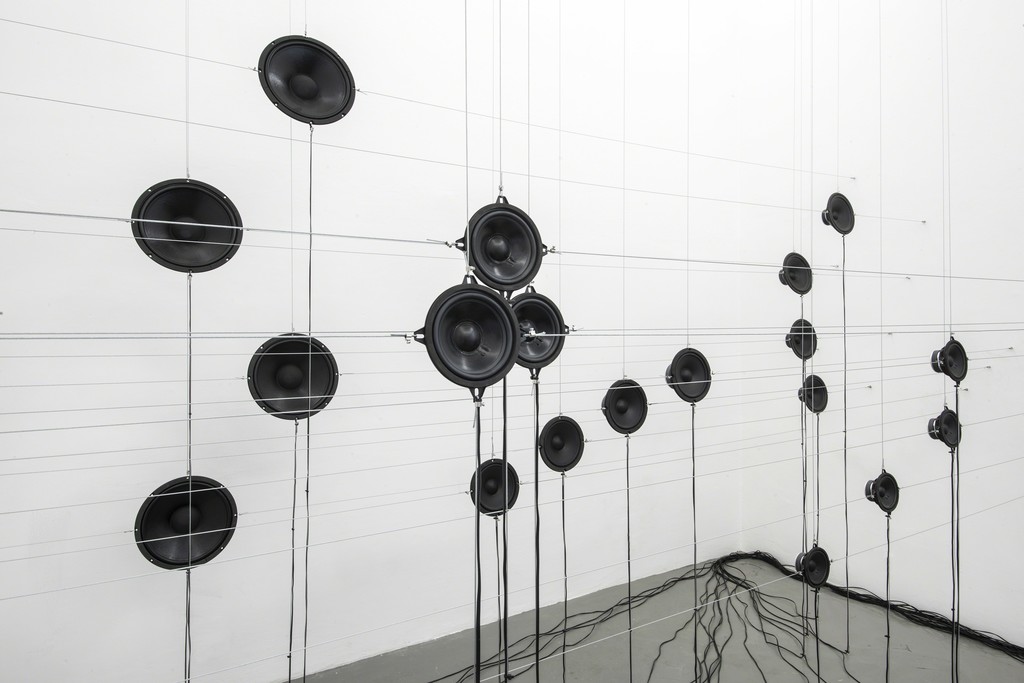 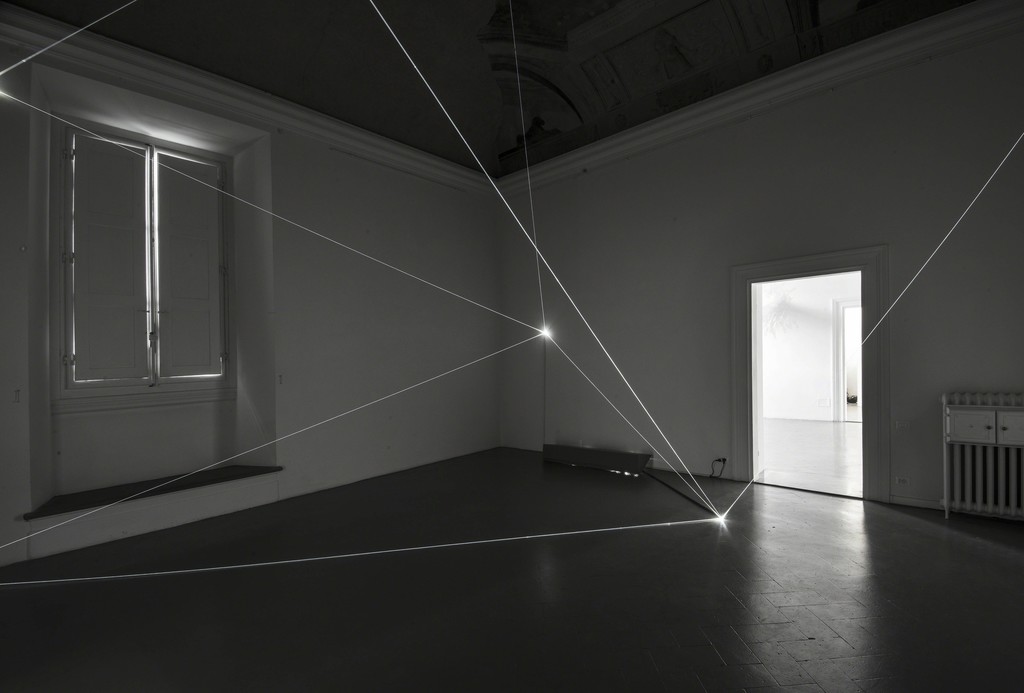 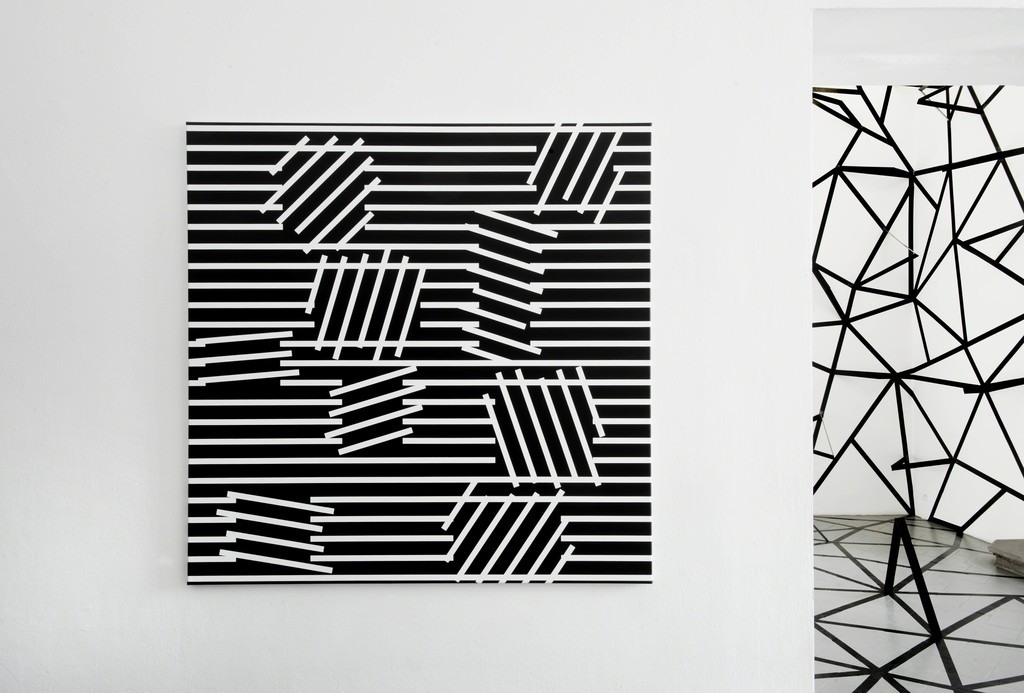 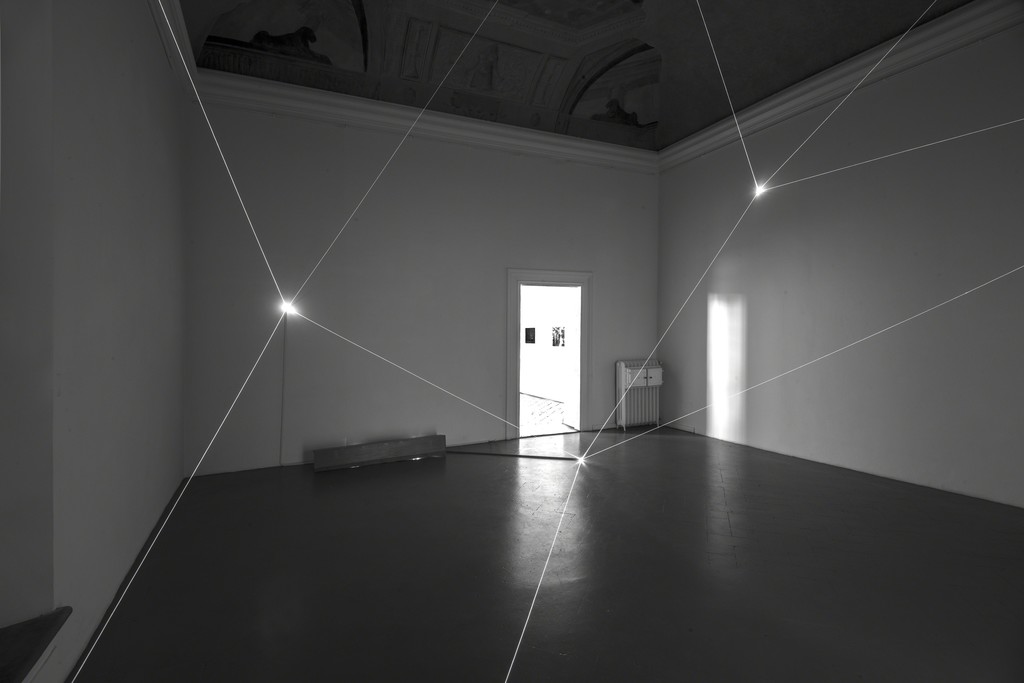 On Thursday February 25th, two consecutive vernissage will take place and represent a symbolic transition from one exhibition space to the other: on one side, in Via Mag- gio, Attitudes>Sculpture #1, by Daniele Capra, and on the other side, in the new exhi- bition space in Piazza Goldoni, Tensioni Strutturali #1, by Angel Moya Garcia, thus creating a passageway between two nearby galleries, but with different character.

TENSIONI STRUTTURALI, curated by Angel Moya Garcia, articulates itself as an organic project, divided in three separate exhibitions, which are mutually independent but yet interconnected among each other, and that will be gradually presented within the Gallery's new exhibition spaces. The premiere of the exhibition will focus on the central role of the individual in the construction of perceived space, whereas the second step of the exhibition will analyze the different possibilities of matter as an element of representation, and then, finally, the third part of the exhibition will study the entropic processes of daily environments.
Four guest artists develop the first part of this trilogy, Carlo Bernardini, Monika Grzymala, Roberto Pugliese, and Esther Stocker, as an attempt to examine – through methodologies, poetics and different visions – the experiential space of reality and the role of the individual in its composition. A succession of ephemeral balances, unusual structures that increment the possibilities of perception, suspended explosions originating one disruptive disorientation, straight segments of lights and shadows that mark a subtle difference between the visible and the illusory, and sound processes that force space, making it a formal synthesis of its inherent characteristics. Residual traces of a sequence of under-tension devices, set and stratified into space, which reveal themselves to be gradually modulated, suspended, neat, and outlined, and are felt only in the moment in which the spectator expe- riences them. An invitation to experience the different contributions, overwhelmed with singularities, deformities, thresholds, and breaking points, in an environment in which peri- meters are cancelled, stability is lost, and reference coordinates are hopelessly forgotten.

In particular, in the rst room, Roberto Pugliese projects tension towards the spectator, who is located in front of a composition, elaborated through the rooms’ measurements turned into sounds frequencies. In the second room, Monika Grzymala three-dimensionally designs a dramatic de agration, with laments of black ribbon that pierce through space, cheating gravity and paralyzing the spectator’s gaze. In the third room, Carlo Bernardini presents a permeable installation made with ber optics, in which light itself gene- rates space through a geometric design in negative, which bounces between the oor, the walls, and the ceiling. Finally, in the fourth and nal room, Esther Stocker, attracted by the formal paradoxes and by “errors”, produces an environmental in- stallation con gured through elements of disturbante and interference that challenge the limits and possibilities of perception and modulate the architectural space.
Carlo Bernardini, born in Viterbo in 1966. He current-ly lives and works in Milan. He teaches Multimedia Installations at the Academy of Fine Arts in Brera, Milan. He made his professional debut in the early ‘90s, and since 1996 has created installations made with ber optics, OLF surfaces, and electro-lumine- scent surfaces. Some of his most noteworthy exhi- bitions are: Light Accords in 2002 at the National Gallery of Contemporary Art in Bangkok; the instal- lation at the Museo Paço Imperial in Rio De Janeiro in 2004; the great ber optic show in Valencia in 2008 at the Ciudad De Las Artes Y Las Ciencias together with the architectural designs by Santiago Calatrava; and the great Event Orizon project presented in 2007 at the Swing Space in New York.
Monica Grzymala, born in Poland in 1970. She cur- rently lives and works in Berlin. She studied sculpture in Germany in the cities of Karlsruhe, Kassel, and Hamburg. She has been a Professor of Painting at the University of Applied Arts in Vienna and of Expe- rimental Design at the Braunschweig University of Art in Germany. Among her most noteworthy exhi- bitions: (2015) Drawing Biennial, The Drawing Room, London; Drawing Now, Albertina Museum, Vienna, Austria; (2014); Raaklijnen /lines of tangency, MSK Museum of Fine Art, Ghent, Belgium; The Making of Forming Something New generative drawing, Synthesis Reykjavik Art Museum Hafnarhus, Iceland;
Tree of Life sculpture garden, long-term project on the roof top, Woodner Company, Manhattan New York City, USA; (2013); Mono Meros, Saal der Mei- sterzeichnung, Kunsthalle Hamburg, Germany; The River II 49 Nord 6 Est, FRAC, Metz, France; Volumen, The Morgan Library & Museum, New York, USA.

Roberto Pugliese, born in Naples in 1982. He currently lives and works in Gavi (AL). He graduated in 2008 in Electronic Music at the Conservatory of San Pietro a Majella, and was the only Italian artist selected for the international exhibition “Sound Art, sound as a medium of art”, promoted by the ZKM Museum in Karlsruhe. Some of his most noteworthy solo exhibi- tions include: Concerto per Natura Morta, at the Studio la Città in Verona; Emergenze Acustiche, Tenuta Dello Scompiglio in Capannori, Lucca; Echi Liquidi, TRA - Treviso Ricerca Arte di Treviso; Gervasuti Mix, omaggio a Cage at the Fondazione Gervasuti in Venice and Aritmetiche Architetture Sonore, at the Studio la Città in Verona. Some of his most notewor- thy collective exhibitions include: Los Maquinistas at the Centro Arte Complutense in Madrid, Noise (col- lateral event of the 55th Art Biennale in Venice) in Venice; Digital Life 2013, at the Macro Testaccio in Rome; Ghostbusters, Charlottenburg Museum in Co- penaghen and Sound Art. Sound as a Medium of Art at the ZKM - Center for Art and Media in Karlsruhe.

Esther Stocker, born in Silandro in 1975. She currently lives and works in Vienna. Between 1994 and 1999 she studied painting and art at the Academy of Figurative Arts in Vienna, at the Academy of Fine Arts in Brera, Milan, and at the Art Center College of Design in Pasadena, California. Since the late ‘90s, Esther Stocker has presented her artworks in numerous solo and collective exhibitions, in Austria as well as many other countries, winning several prizes (for example, in 2004 she achieved the prestigious Au- strian Otto Mauer award). Esther Stocker has exposed her works – among others – in the following museums: Museum Ritter, Waldenbuch; Macro, Roma; Künstlerhaus, Hannover; Kunstmuseum, Stuttgart; Museum Moderner Kunst Stiftung Ludwig, Wien; Essl Museum, Klosterneuburg; Belvedere – 21er Haus, Wien; AR/GE Kunst Galerie Museum, Bolzano; Va- sarely Museum, Budapest; CCNOA, Bruxelles; South London Gallery; MassArt Boston and many others.