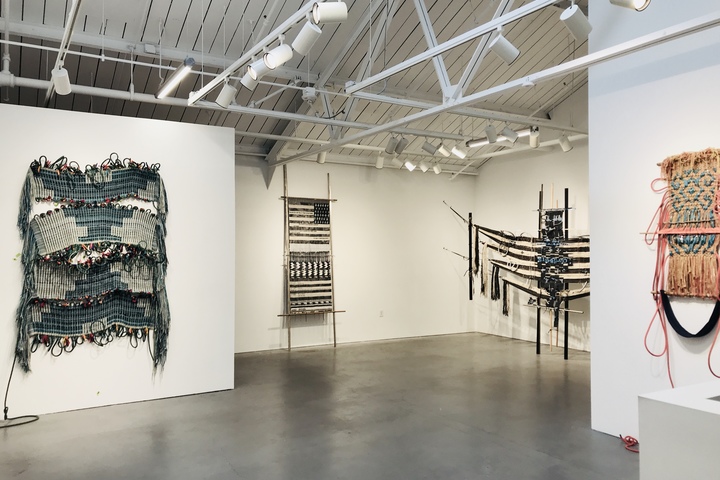 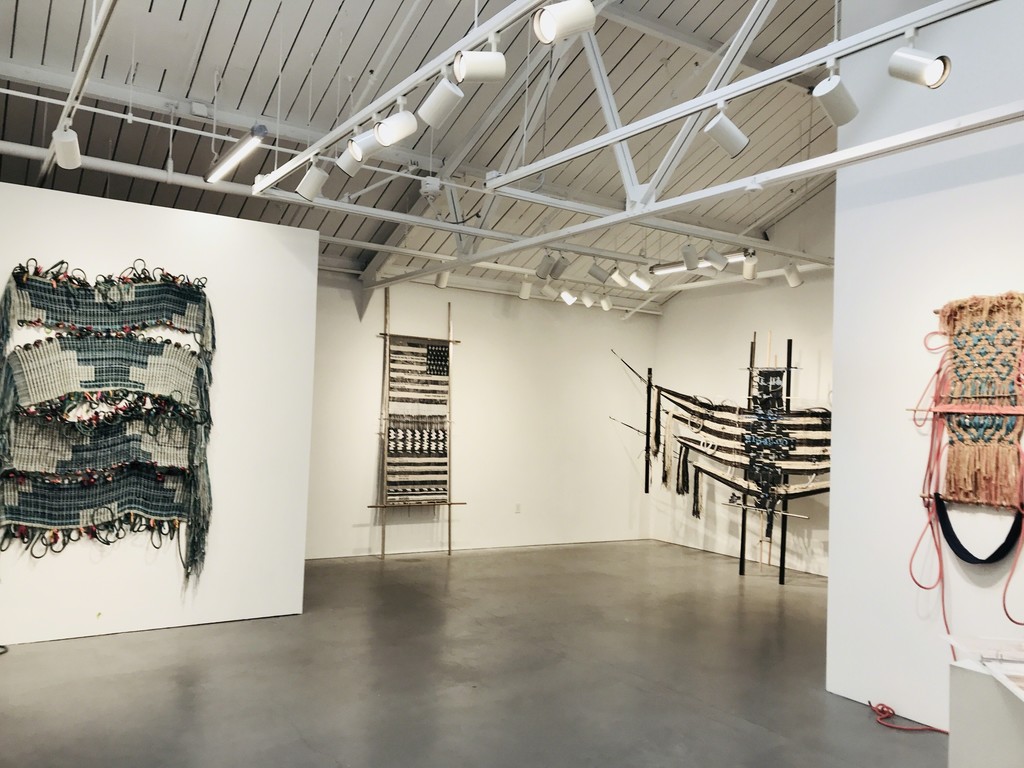 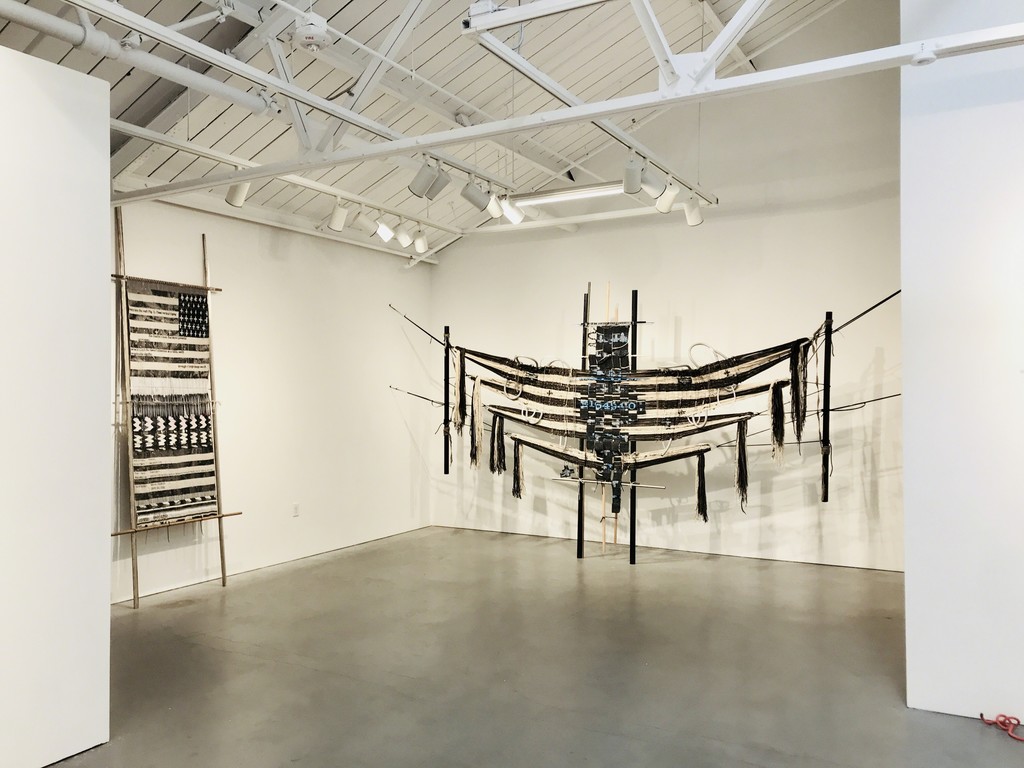 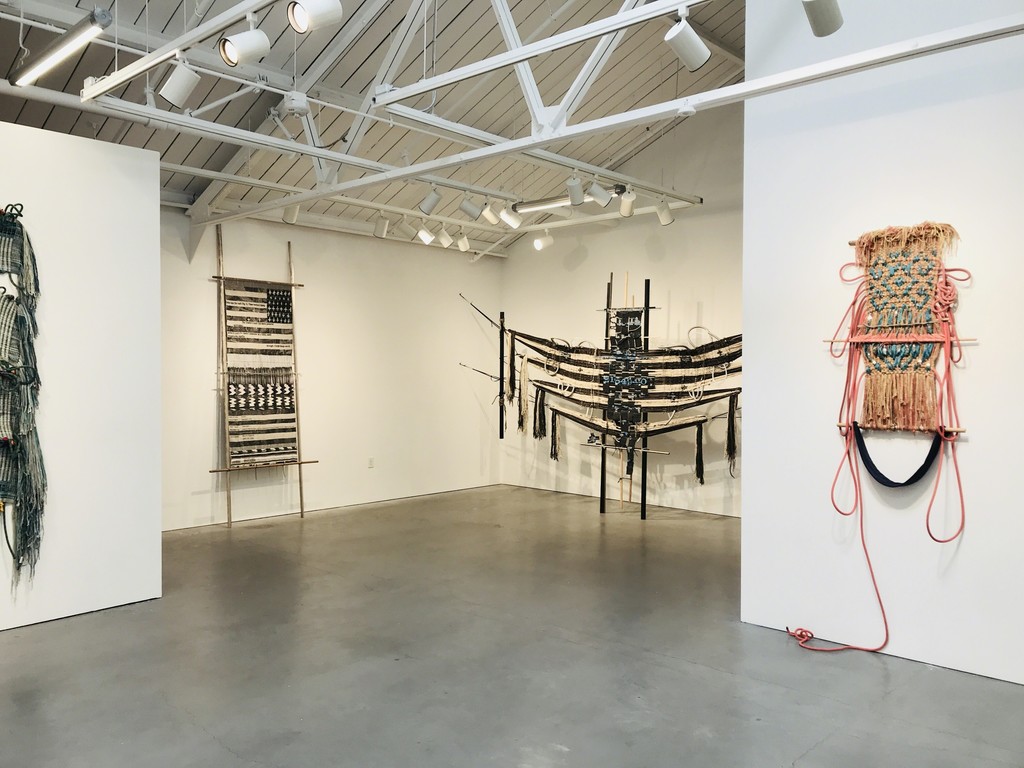 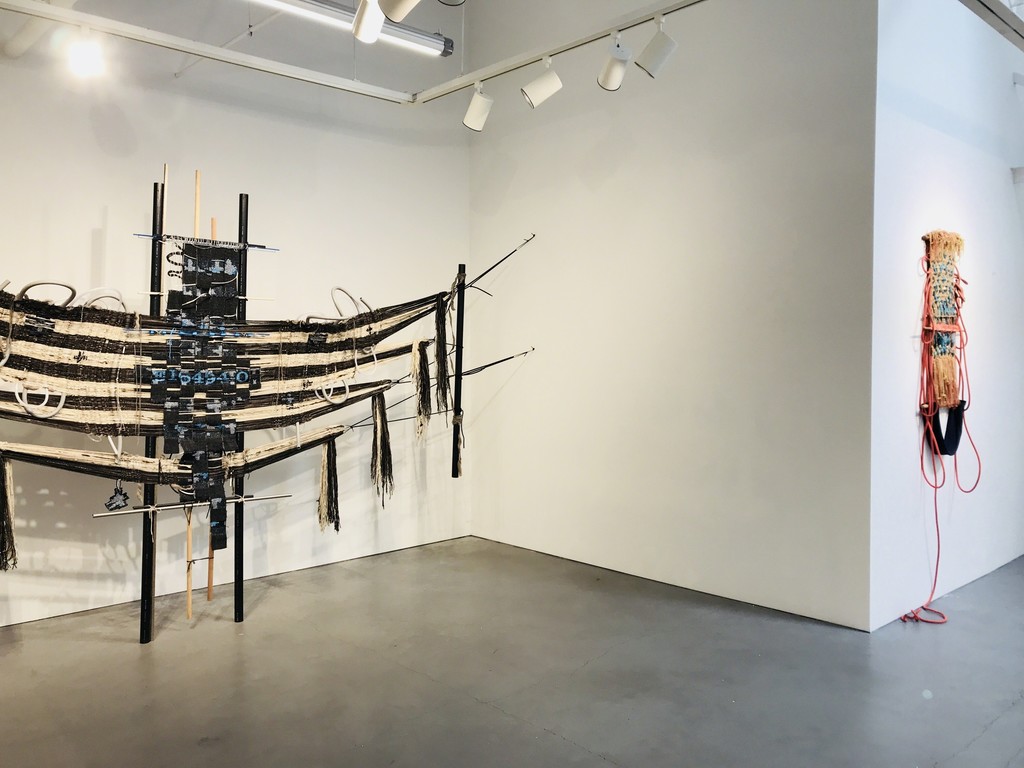 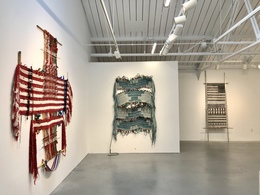 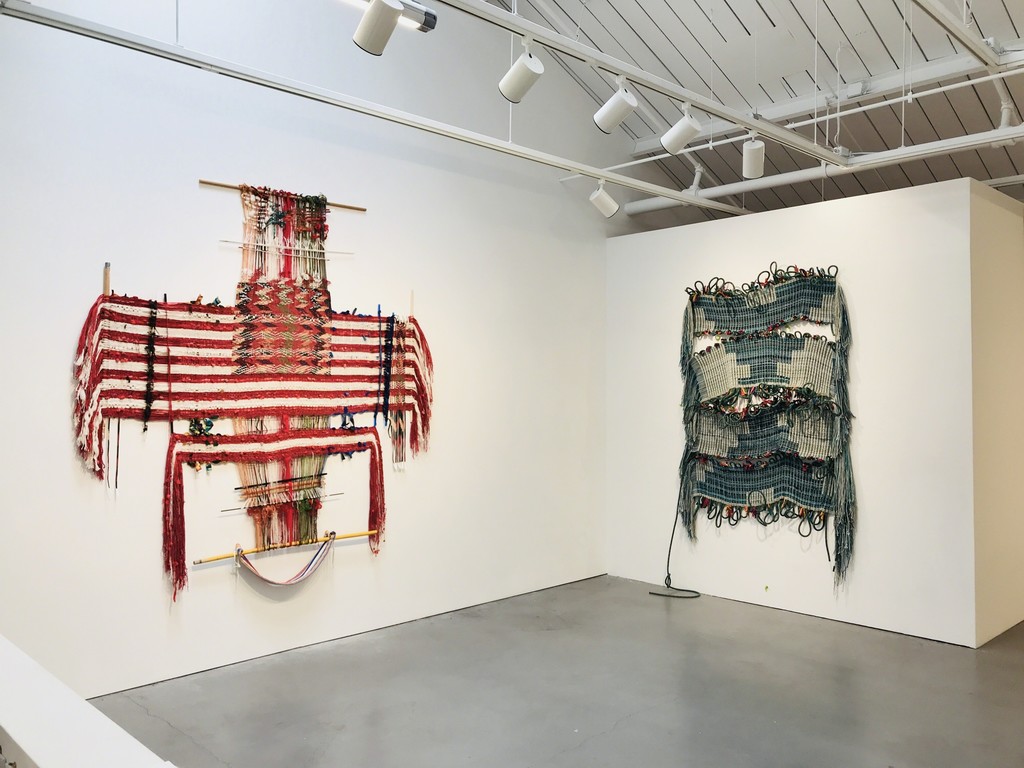 In Wingspan, Dominguez Hultgren considers not just what is within reach, but how bodies can move beyond the limits that are imposed on them. Much of the research for Wingspan began in the Smithsonian’s digital anthropological archives of Navajo textiles. There, Dominguez Hultgren encountered the story of Navajo weaver Juanita (Asdzáá Tl'ógí) from the 1870s and her weaving of a U.S. flag. “Juanita’s weaving is written about as though it’s just a symbol of treaty and assimilation,” Dominguez Hultgren says. “But there’s more going on than capitulation to a sign of U.S. nation.” In Wingspan the artist explores through her own weavings what “more” might start to look like.

Kira Dominguez Hultgren weaves past the edges of the fabric, if her woven mixed media sculptures can even be called fabric. Materials and color refuse to stay fixed in place, preferring instead to exist in a tension that twists and compromises the weaving. Through the exuberance of woven material, Wingspan explores that which makes and pulls apart the fabric of identity: race, nation, color, technology, and cultural categorizations writ large. It is in the margins, in the fringe of the weavings, where new possibilities open up for the artist.

As she weaves she plays and wrestles in this generative tension of materials pushing up, adding on, changing, and being changed by one another. Sometimes the pieces include recognizable symbols, images, or letters. But what begins as a U.S. flag, an Aztec eagle, images of Navajo or Punjabi fabric, or even digital seriality, become unrecognizable in the collision of competing material, color, and personal history that pile into and create and obscure the symbol.

Handspun wool meets plastic tubing. Aluminum thread winds onto industrial felt. The Aztec eagle gets woven in Indian sari silk split apart by used Berkeley Ironworks climbing gym ropes. Yet there’s still more to the story of identity and culture than these materials can possibly show. To weave past the edges, into and beyond the fringe, means that in Wingspan, the weaving is never finished.

Kira Dominguez Hultgren (b. 1980) grew up in Berkeley, California and Provo, Utah. Her work has been exhibited internationally in educational community spaces and in the United States in galleries and alternative art spaces.

Dominguez Hultgren studied French postcolonial theory and literature at Princeton University (B.A. Comparative Literature, 2003), and performance and fine arts in Río Negro, Argentina. From 2010-2012, she toured with an international women’s storytelling troupe, and was a featured teller at the Epuyén Regional Festival in Patagonia. While in Patagonia, she apprenticed with master weaver Mary Coronado, where Dominguez Hultgren studied the process and history of indigenous warp-faced weaving of Mallín Ahogado on a Mapuche vertical post loom.

Today, Dominguez Hultgren combines her interests in postcolonial theory, oral storytelling, and weaving, as she seeks to decolonize the family stories of racial identity she grew up hearing and repeating. She works and lives in San Francisco, CA with her family.