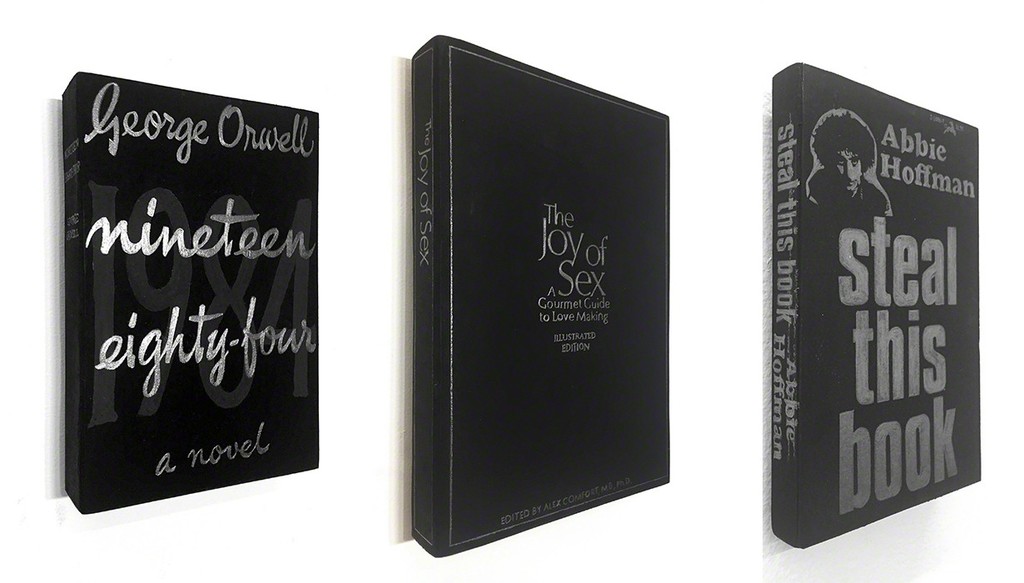 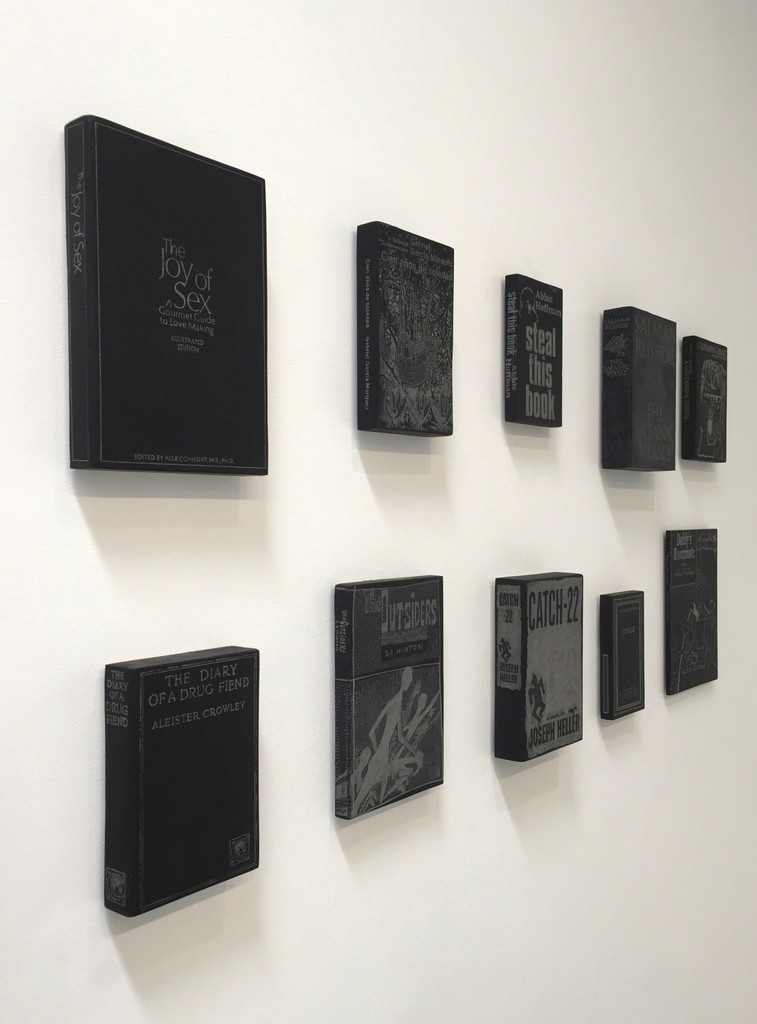 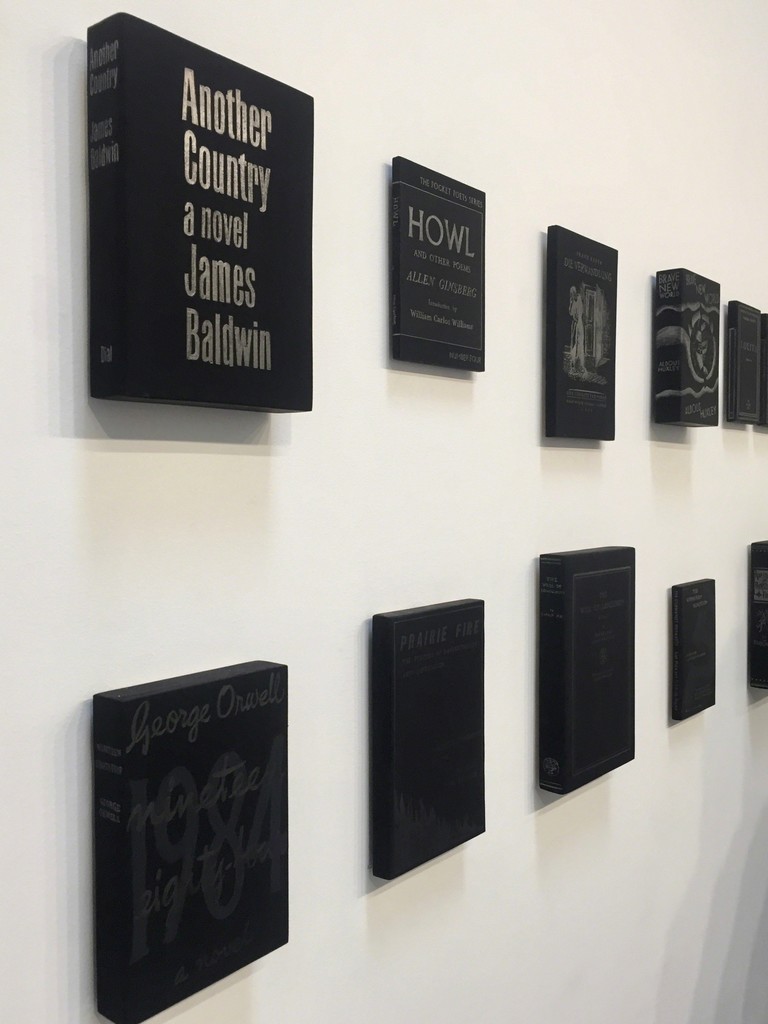 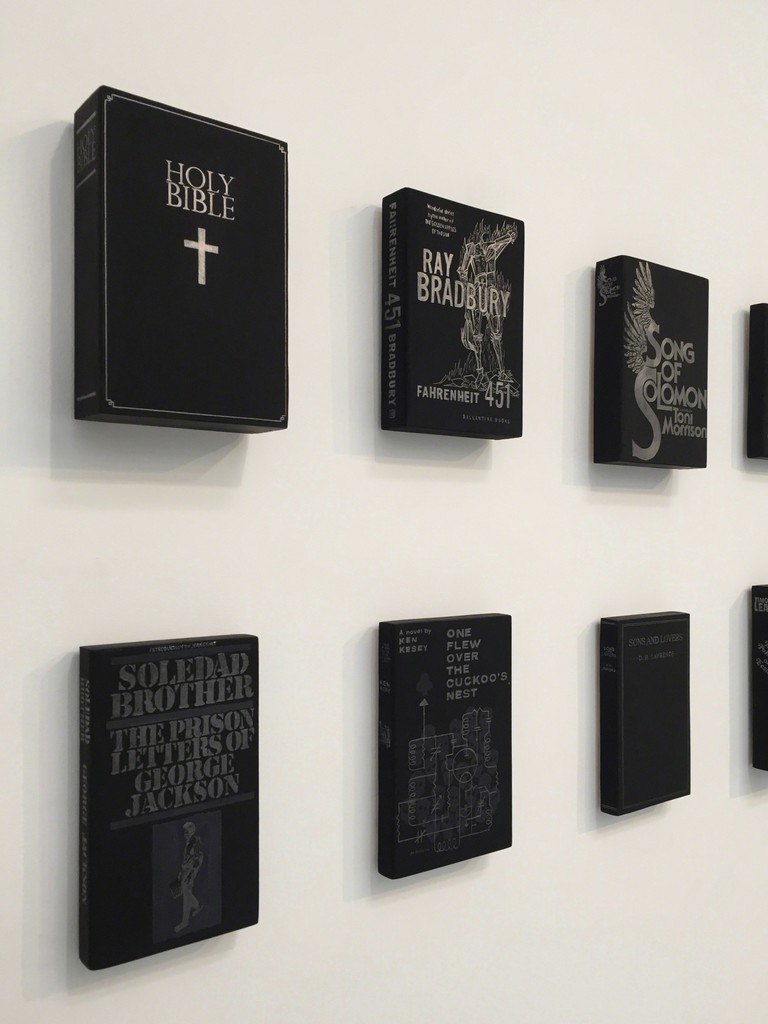 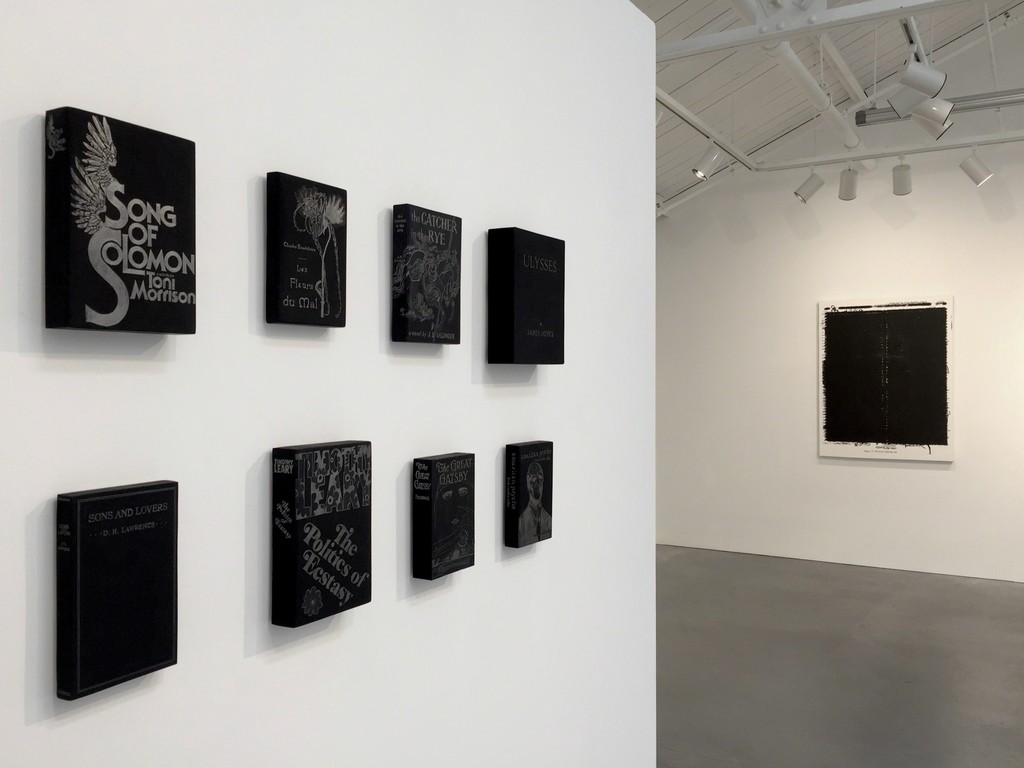 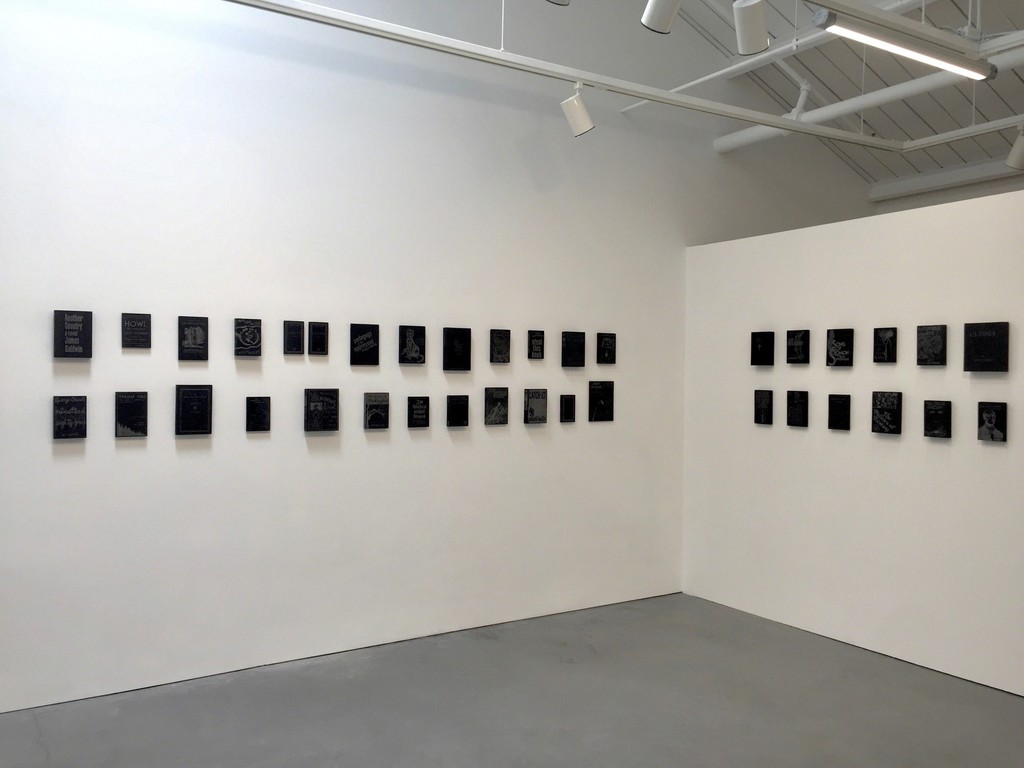 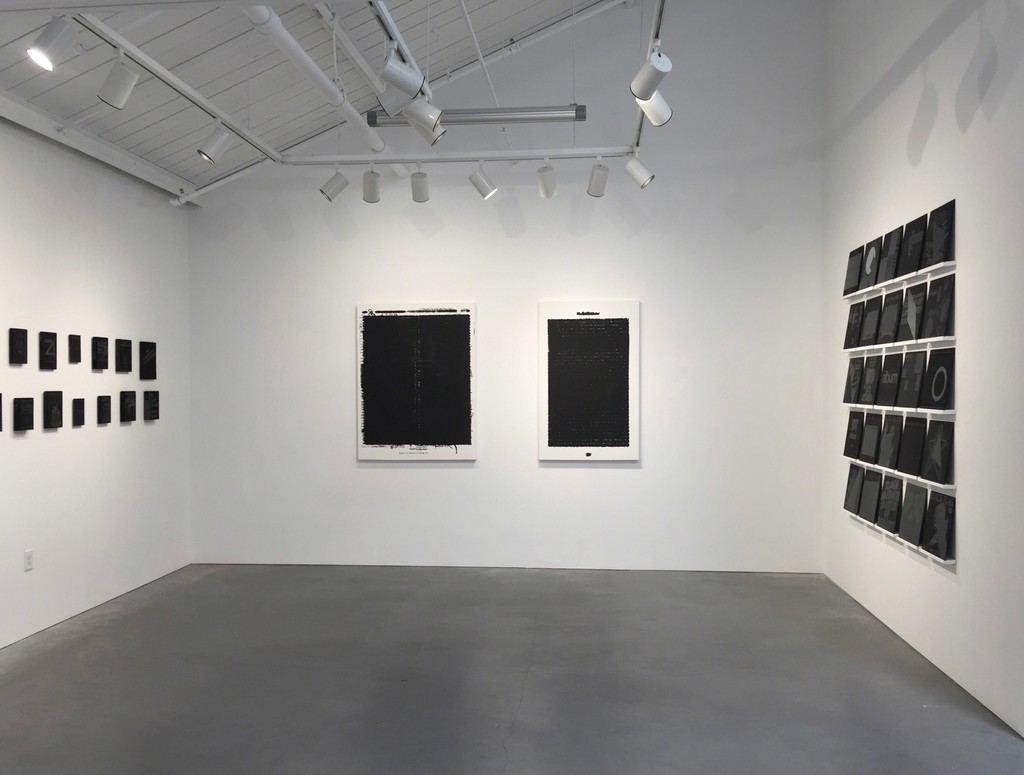 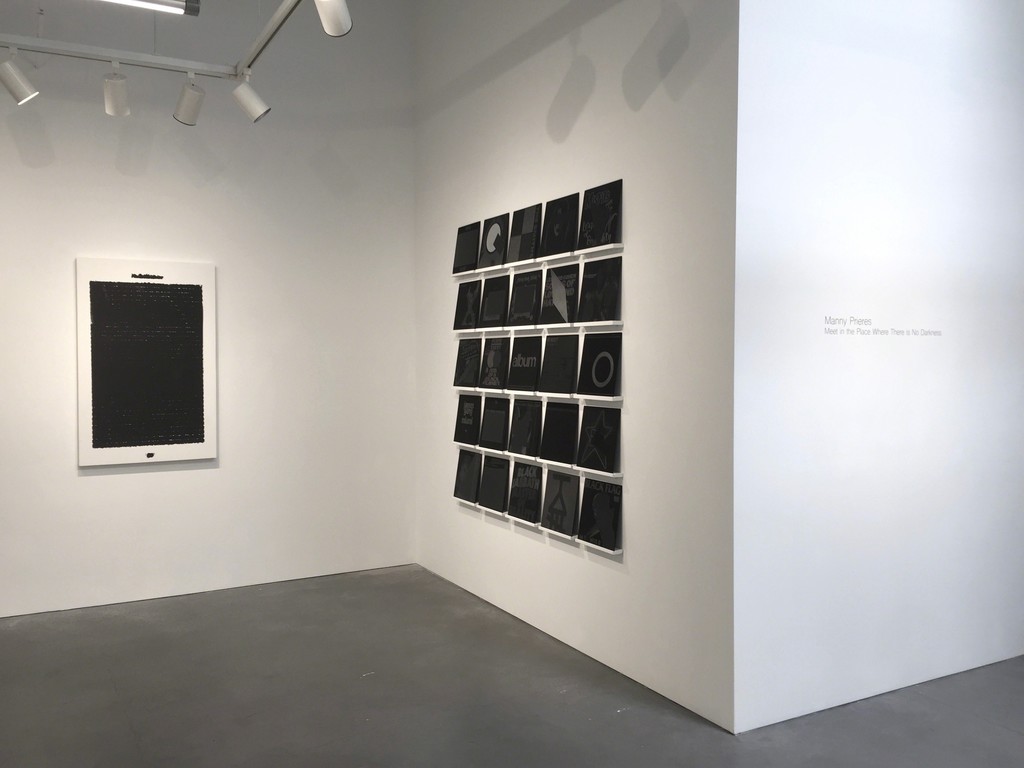 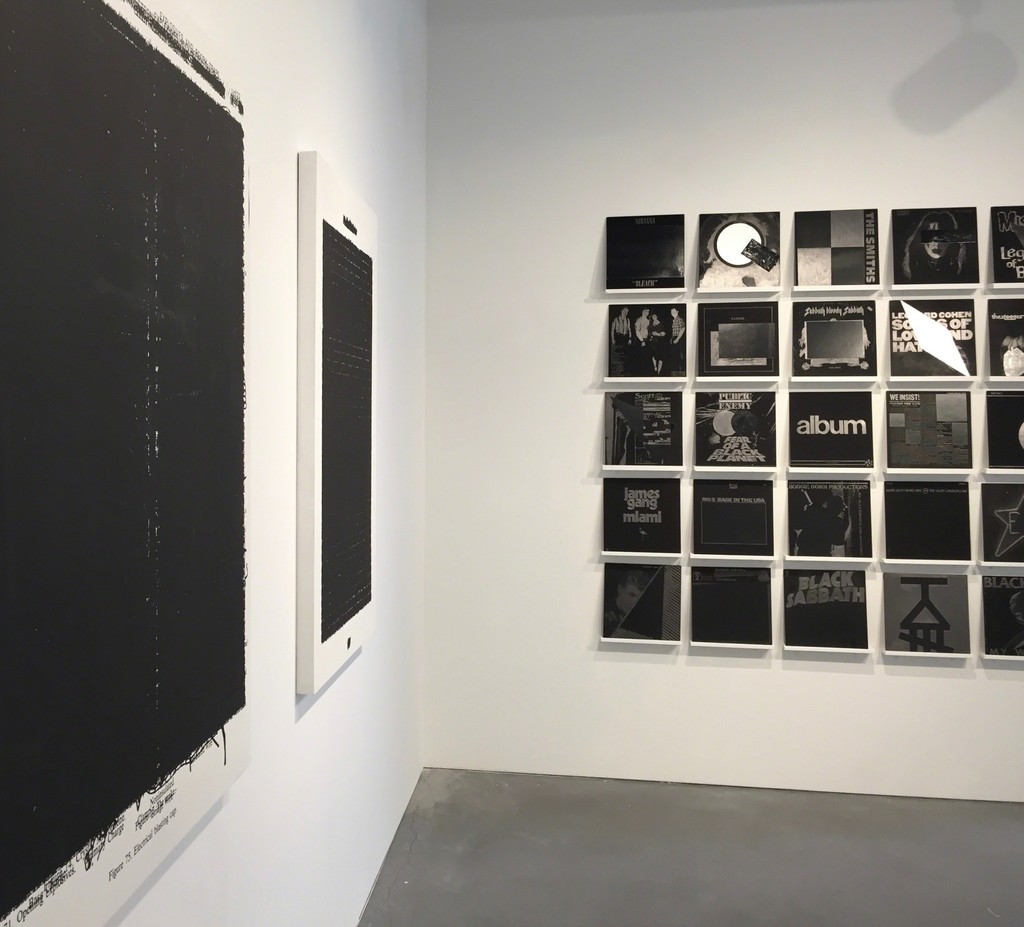 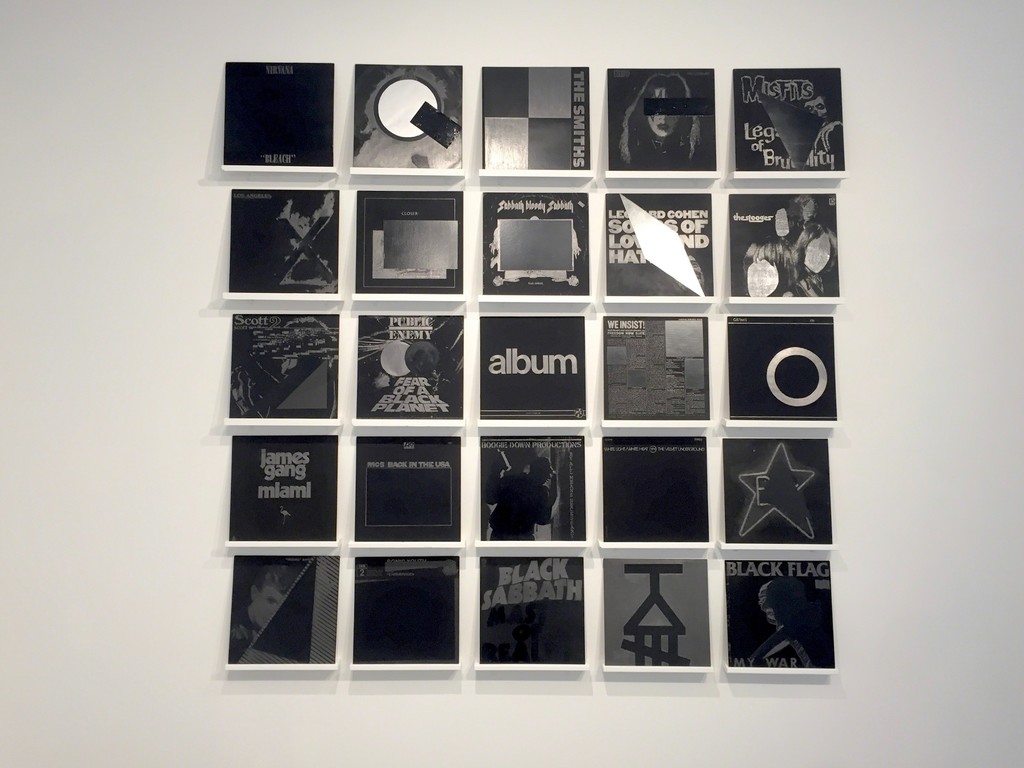 The title of the exhibit comes from 1984 by George Orwell. The protagonist (O’Brien) uses this phrase twice. The first time, in a dream, he means to meet in a place without shadows or deceit. The second time, it means meeting in the brightly lit jail in which O’Brien is indefinitely imprisoned. Doublespeak and the manipulation of meaning are at the core of both 1984 and Manny Prieres’ works.

There are three bodies of work included in Meet in the Place Where There is No Darkness. The first is the Banned Book series consisting of 60 books that have been banned by entire countries or certain libraries. He recreates the books as free standing sculptures hung on the wall.

This is the second iteration of the banned book series. This version has a more pointed political bias. The current political situation in the United States has motivated Prieres to bring light to the issue of censorship and the free press, exclusively including leftist literature. The books are rendered in shades of black gouache and silver graphite as sculptural objects with spines protruding from the wall. The first series was presented as framed drawings.

The silver and black objects, suggest the hidden, clandestine qualities that, when revealed, spawned parental outrage at local libraries and swift action by national legislatures. Many of the texts have become intellectually revered and canonized, while many still struggle to remain in schools and libraries.

The second series is I Was A Teenage Revolutionary, and consists of 25 LP format albums chosen from his own favorites as a teenager. The selection speaks to his defiant, troubled and restless sense of political urgency both as a young man and now.

The third series is a set of four paintings created by scanning every page of a single book. Each scan is laid onto the next scan until the entire book is one digital file maintaining the original registration of the book. He then creates a silk-screen and screen prints the canvas with the text of the entire book in one pass. On view will be Lolita and The Anarchist’s Cookbook. Together they point to the history of printing with Lolita having near perfect registration as it was printed on modern presses. The Anarchist’s Cookbook alternately, is a visible reminder of the legacy of preprint presses and the handmade nature of books.

Prieres’ work addresses the influence of mass communication in print and digital media. The work is informed by graphic language and how different social groups have used it to convey or contain ideas. He is interested in how graphic signifiers and the written word are used in art, and ideas that were at one time taboo, fringe or targeted for elimination become culturally sublimated, no longer retaining the power or meaning that they once did.

Another aspect of his work is addressing the “death of print”. Print is being rapidly replaced with digital media in all aspects of culture. He is interested in this disruption. He intentionally explores this topic through traditional forms of making such as drawing, painting. The painting and drawing is itself a form of serial production. Prieres replaces the printing press with the hand. By hand, he repeats the process of creating editions where the outcome is not a perfect facsimile of the original.