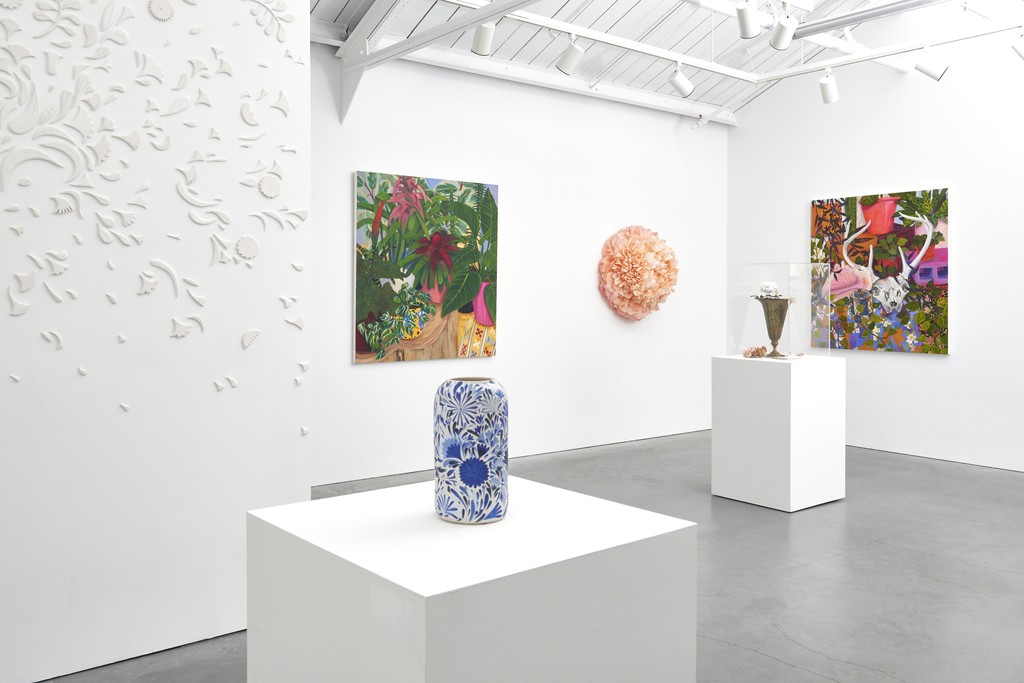 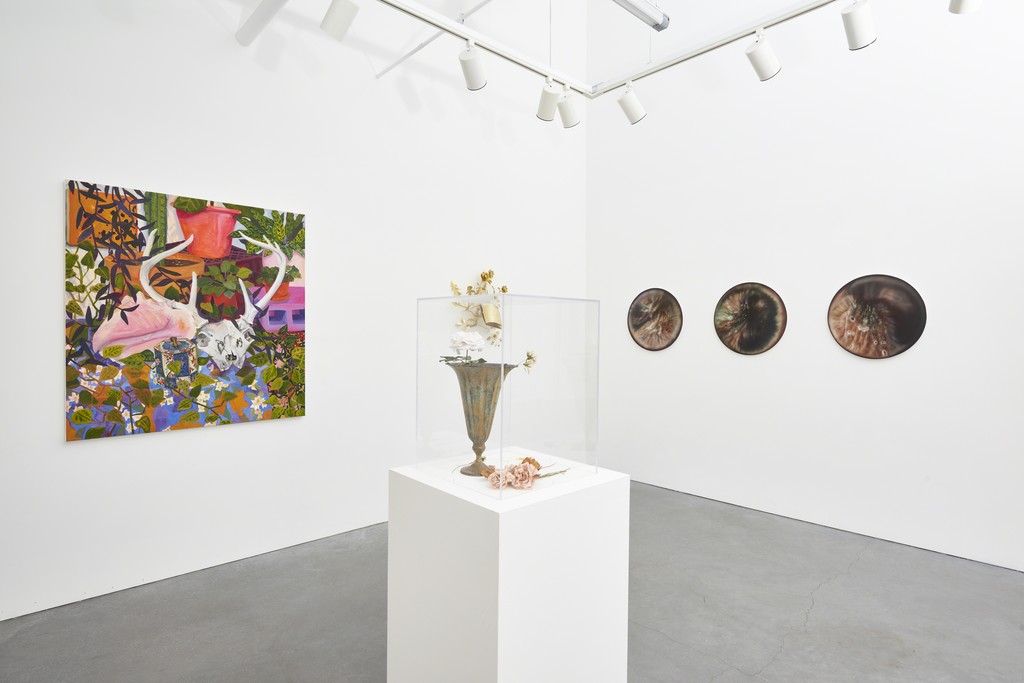 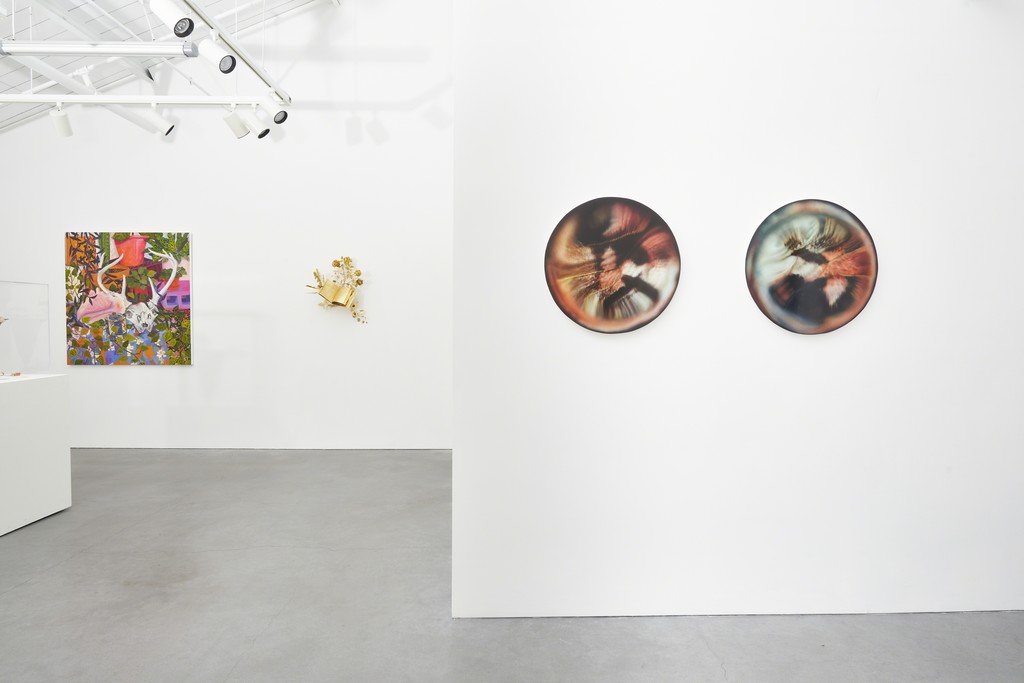 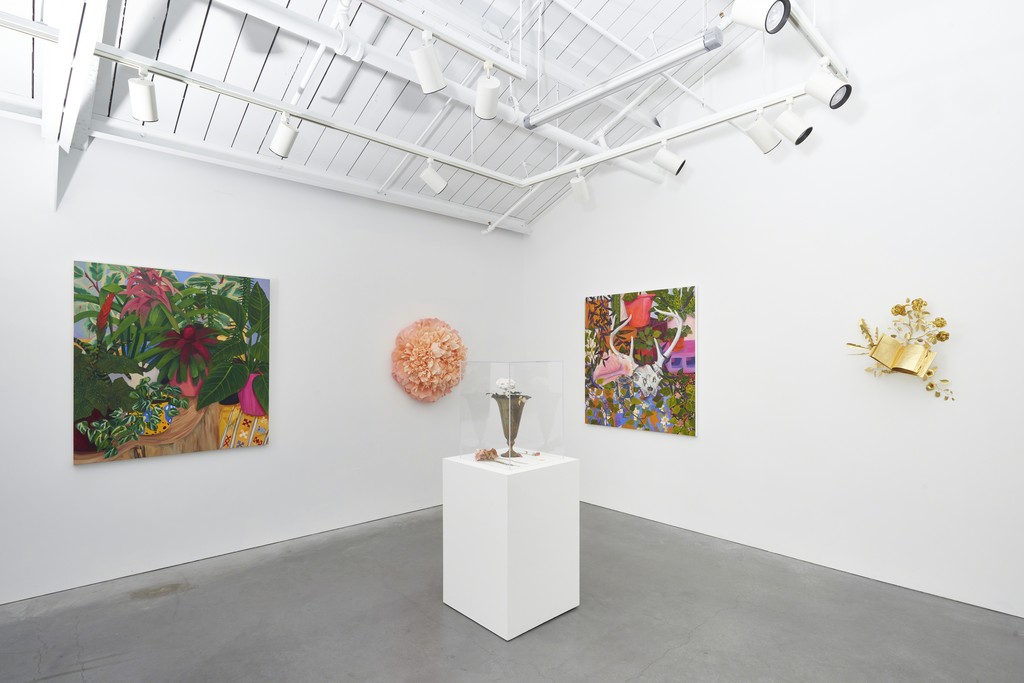 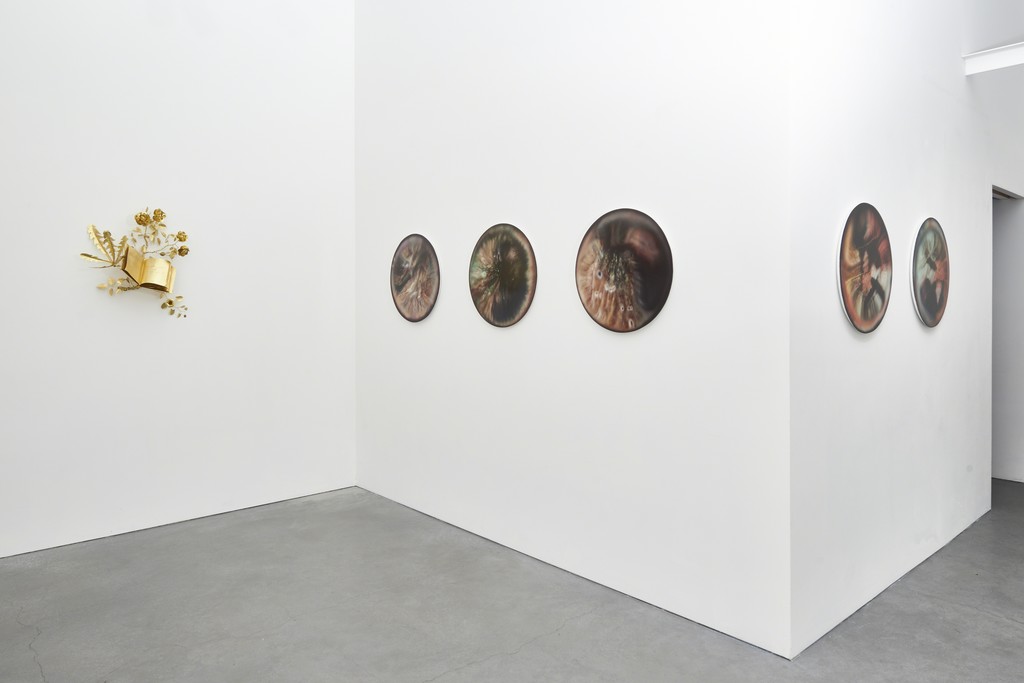 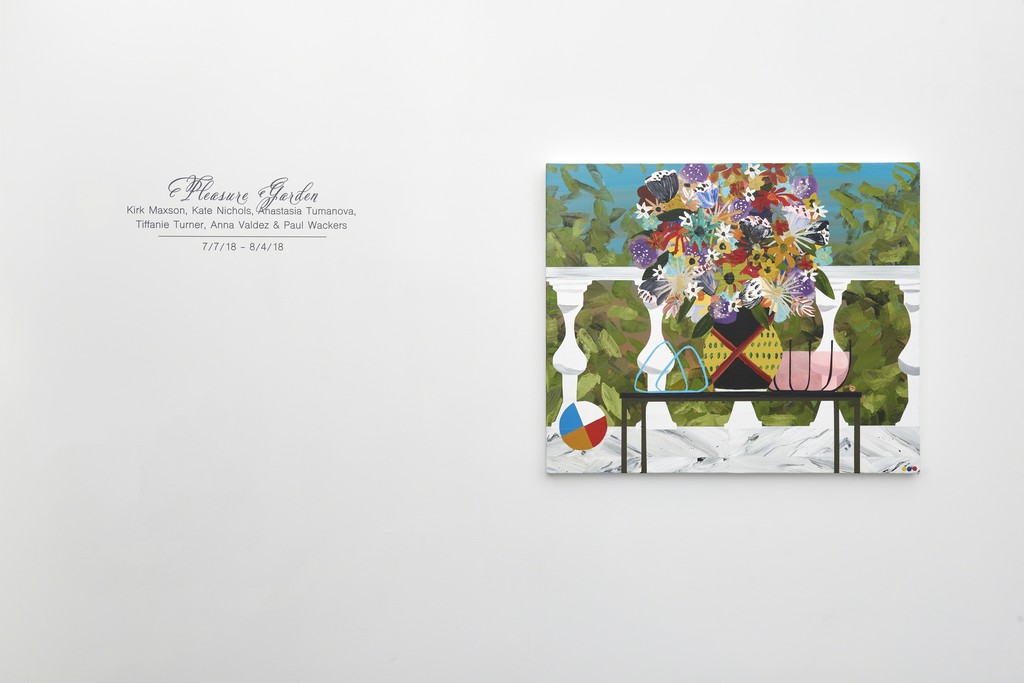 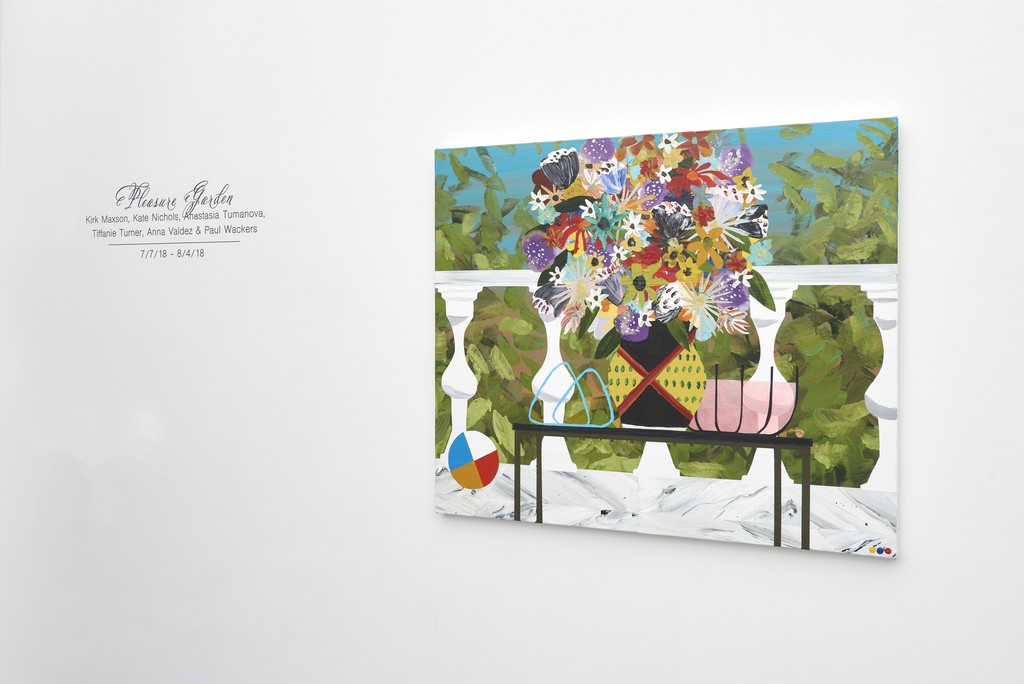 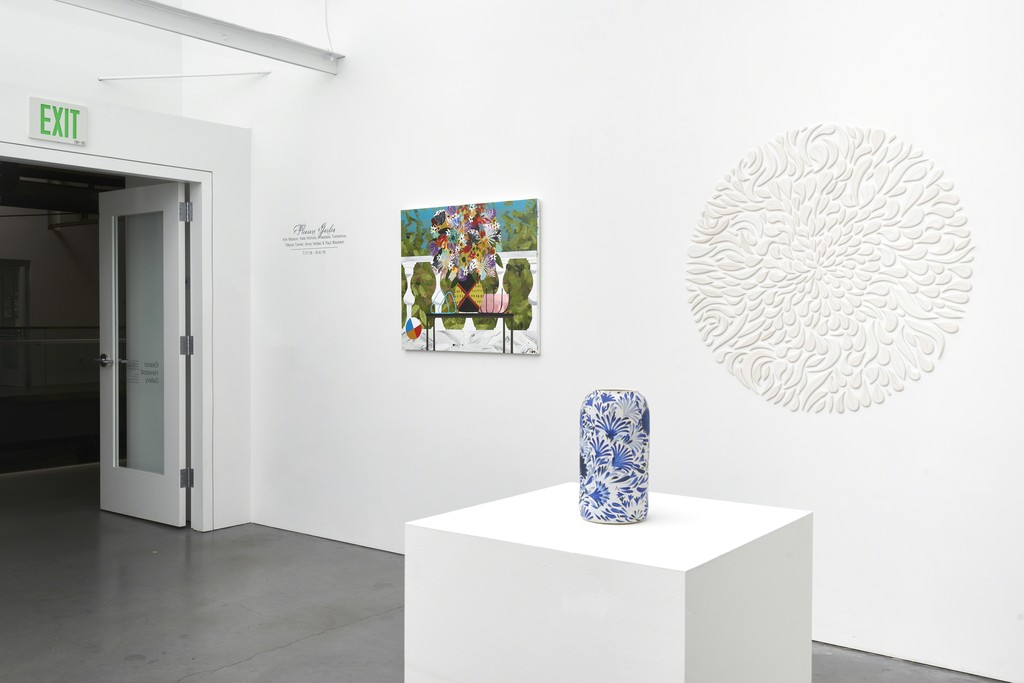 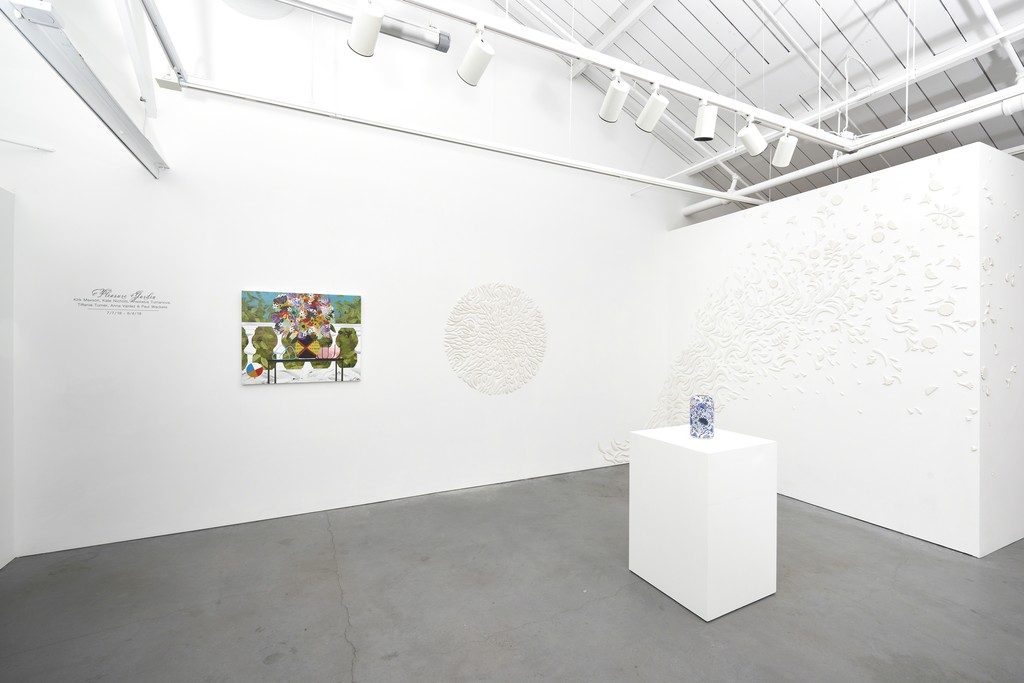 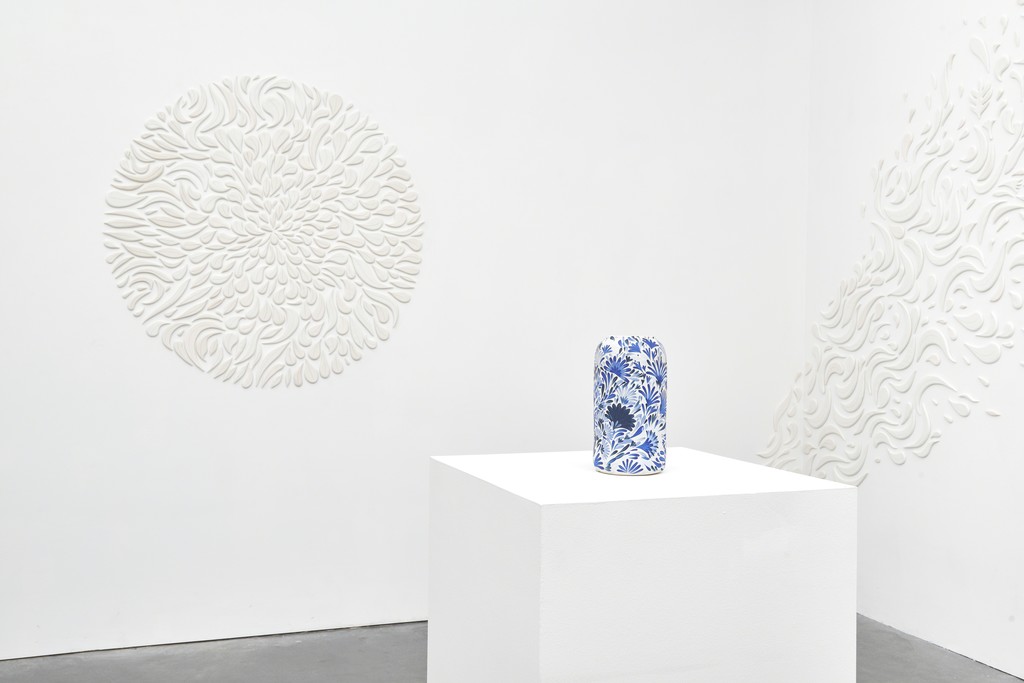 The term “Pleasure Garden” came into common usage in the Victorian era, when cities became more dense and people sought a respite from the intensity of their cities to celebrate nature, art, music, and crafts. Often quite large in scale and going back as far as Mesopotamia, “Pleasure Gardens” have sought to showcase contemporary arts of the time and innovation. All the artists in the show use their work to address larger concepts while using natural and beautiful forms as their jumping-off point. Together they create a lush and atmospheric room for contemplation and inquiry.

Maxson created a delicate sculpture of brass depicting roses, morning glories, and dandelions, nestled within is the book “Querelle de Brest”, a book by Jean Genet, with a drawing by Jean Cocteau. The piece was part of a larger exhibit named the “Voltaire Room” that Maxson exhibited in 2015. The entire exhibit was an ode to acceptance and tolerance. This particular piece of Maxson’s refers to Genet’s persecution as a gay man in France during the 1920s-1940s. Cocteau, Sartre and Picasso were largely credited with petitioning the French President to set aside a life sentence and thus kept him out of prison.

Nichols includes exquisite paintings of butterfly wings. “On its face, the subject of my new paintings is two butterflies—one that scientists are working to bring back from extinction, and another that other scientists have engineered to alter its wings’ patterning.” Her paintings show a nearly abstract image of a portion of a butterfly wing at the point of magnification that scales are seeable on the wings. However, the edges are blurred and fade in and out of focus. She says the “paintings suggest an animal liquefied, ready to assume new forms”. She’s “trying to draw parallels between the distortion and displacement that accompanies focus, whether it’s optical focus or zeroing in on specific passages in genetic code.”

Tumanova’s ceramic works are “an expression of gratitude for nature’s healing gifts”, and an escape from her digitally immersed life. Her latest innovation in capturing nature's beauty are intricately arranged porcelain murals, which evolved from her ephemeral work with fresh leaves and flora. For “Pleasure Garden”, Tumanova will create a site-specific mural called “Botanical Symphony”, an installation of over one hundred hand-cut pieces of porcelain.

Tiffanie Turner is well-known for creating exquisitely beautiful paper flowers and has authored the book: “The Fine Art of Paper Flowers”. She includes two pieces in the show. One is an oversized “Peach Peony” flower head and the other sculpture is an assemblage titled “The Ends” with faded and dying flowers presented under a vitrine. Turner is interested in the full arch of life and much like a Dutch Still Life painting, presents various states of youth and old age as represented in her flowers. Her sculptures also reflect her interest in an aging woman's body and the analogies of a woman and a faded flower. Finding beauty in all states of life and creating them as artwork is an aesthetic as much as a social-political choice in her work.

Paul Wackers includes a painting, “The Morning Before Yesterday”, that depicts a bouquet of flowers against columns with a garden beyond. His deliberate still lives often gather items for display that are a collection of sorts. Sometimes his paintings depict rocks, vases, and impossible objects made with a spray paint gestures. Other paintings have more to do the natural world. Of his work he says, “The work I make is based on things and places I see, feel and keep close to me. I make them to try to understand what they are, what they mean, and how I should understand them. Many of the subjects are things that seem very familiar, but through the process become confused or unreal because of the associations created within the picture. I try to remain open to whatever path they take me down.”

Anna Valdez includes a painting of a curated interior, a “Pleasure Garden” within her own studio. Many of Valdez’s paintings come from composed still lives. She say: “Recently, many of my pieces have been still lifes. These arrangements have been composed from various household items such as my clothes, quilts, scarves, blankets, houseplants, drawings, paintings, books, records, and vessels. These items exist as a part of my domestic environment, and I have put them in my paintings to understand the domestic sphere as emblematic of both personal and collective experience.”

He has also created numerous installations for private residences. He is represented by Eleanor Harwood Gallery, San Fracnisco, and has previously worked with Eli Ridgeway Gallery and the Gensler Architecture firm in San Francisco.

San Francisco artist Kate Nichols synthesizes nanoparticles to mimic structurally colored animals, grows artificial skin from microorganisms, and makes her own paints, following fifteenth-century recipes. The long tradition of painters as material innovators inspired Nichols to become the first artist-in-residence in the Alivisatos Lab, a nanoscience laboratory at UC Berkeley. In 2010, she was appointed a TED Fellow and was awarded a Jacob K. Javits Fellowship. Her artwork has been featured on the cover of the journal Nature, on the TED stage, and in The Leonardo Museum’s permanent collection. In 2015, Nichols was awarded the Richard Diebenkorn Teaching Fellowship, an honor SFAI extends to one early-to-mid-career painter each year. Nichols received a MA in Visual Studies, at University of California, Berkeley in 2010and a MFA at California College of the Arts, San Francisco, California in 2013

Anastasia Tumanova
Anastasia Tumanova is a designer and self-taught ceramic artist in San Francisco. Originally from Moscow, her youth was colored by camping trips in the Russian wilderness and travels around the world with her adventurous family. She prefers to work with earthy materials that bring her in closer communion with nature such as clay, leaves, and botanical ephemera. Anastasia creates intricate patterns and large scale murals from leaves and flora, and is the inventor of porcelain wallpaper. Her innovative work has been seen at First Amendment Gallery, West Coast Craft, in the studio of Windy Chien, and most recently at Eleanor Harwood Gallery.

Tiffanie Turner
Flowers have been used throughout history as currency, and as symbols of life and death in their transient nature. Tiffanie Turner uses these ideas as a jumping off point to couch her themes and stories in the faces of metastasized and “ruined” gigantic flowers. Through her large botanical works in paper, she studies scale, texture (petals sometimes reading like feathers, or fur) and color. She works with the rhythms and patterns found in nature, as well as metastasized forms and gestures formed by missteps and irregularities in nature like decay, rot, wilt, dormancy, death, and genetic and viral mutations. The accessible nature of these gigantic botanical sculptures allow them to readily shine a light on a multitude of issues, and by adding destruction and decay to these beautiful pieces that could have just as easily been created to be round, symmetrical and perfect, Tiffanie impresses upon the viewer the urgency of our environmental crises and ethical struggles.

Tiffanie is a licensed architect and working artist, and the inventor of these particular large-scale works in paper, which she has been exhibiting for the past four years. In that time, she has worked tirelessly to change the notion of paper flowers from decorative and consumer products into evocative and meaningful conceptual artwork.

Anna Valdez
Anna Valdez’s artistic career began unexpectedly: during an archaeological dig, she found herself keeping a sketchbook in which she reinterpreted spaces, maps, and lived experiences. Valdez, who has an academic background in archaeology and socio-cultural anthropology, thinks of her paintings and animations as cultural self-interpretations. “I am working on various narratives that investigate my own traditions and history through a visual format,” she says. In addition to her own store of memories, Valdez looks to her immediate surroundings, family photographs and recipes, and “vague stories” for the subjects of her work. Recurring motifs in her work include patterned objects, masks, and veils. Valdez received an MFA in painting from Boston University and a BA in Anthropology from UC Davis. She is represented by Hashimoto Contemporary, San Francisco, CA

He received the Tournesol Painting Prize in 2008 with an awarded residency at the Headlands Center for the Arts (Marin County, CA), the NKDale Residency (Sunfjord, Norway), Encore (Brussels, BE), and an artist residency at the Byrdcliffe Colony (Woodstock, NY), and the Watershed Center for Ceramic Arts, (Portland, ME).

Paul Wackers has been exhibiting with Eleanor Harwood Gallery since 2006. He lives and work in New York City.