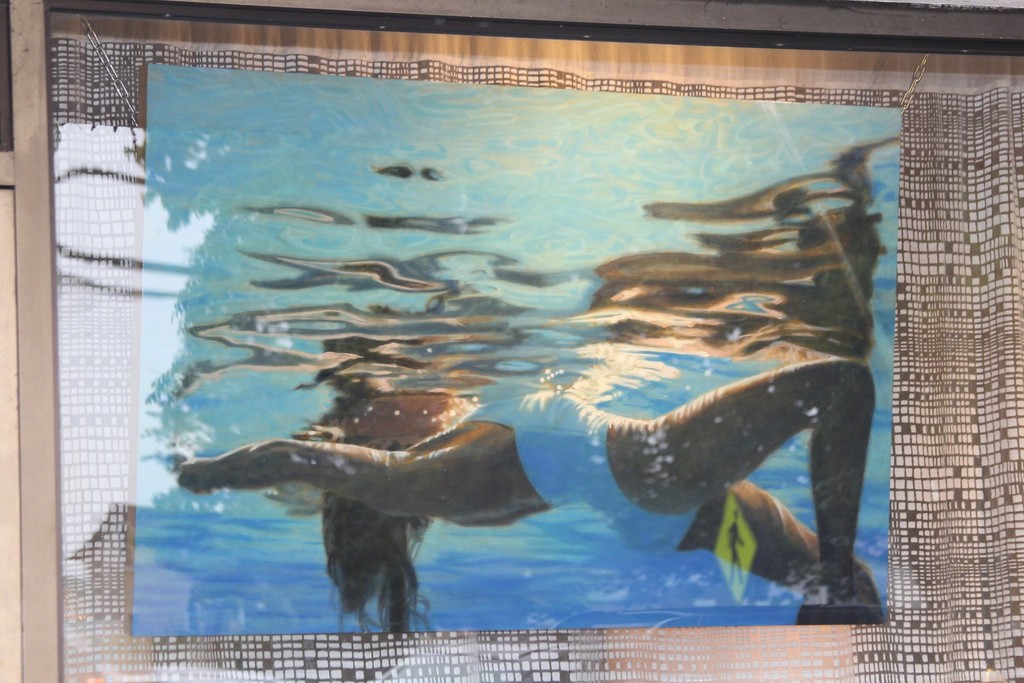 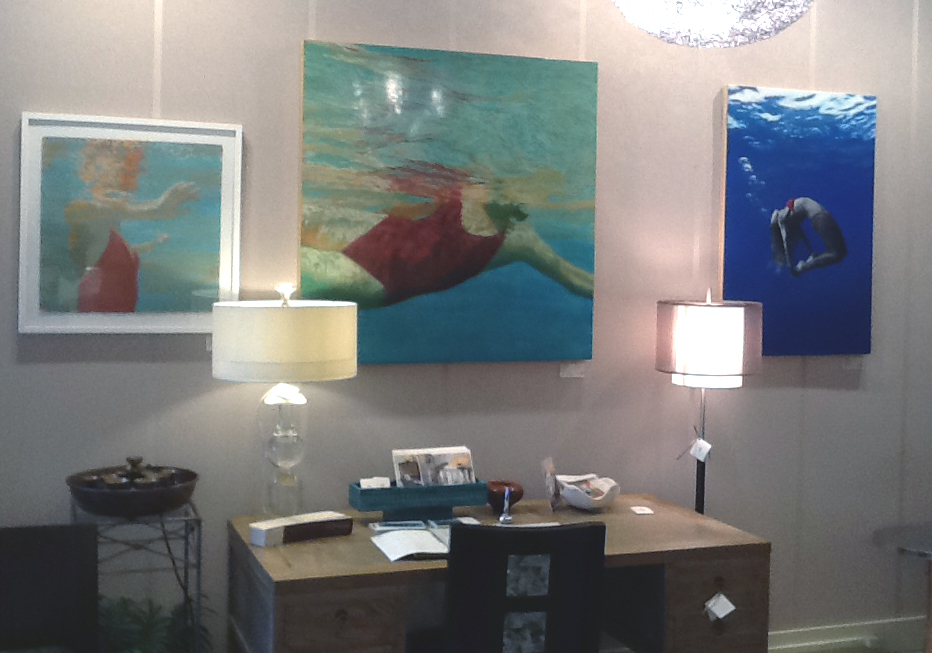 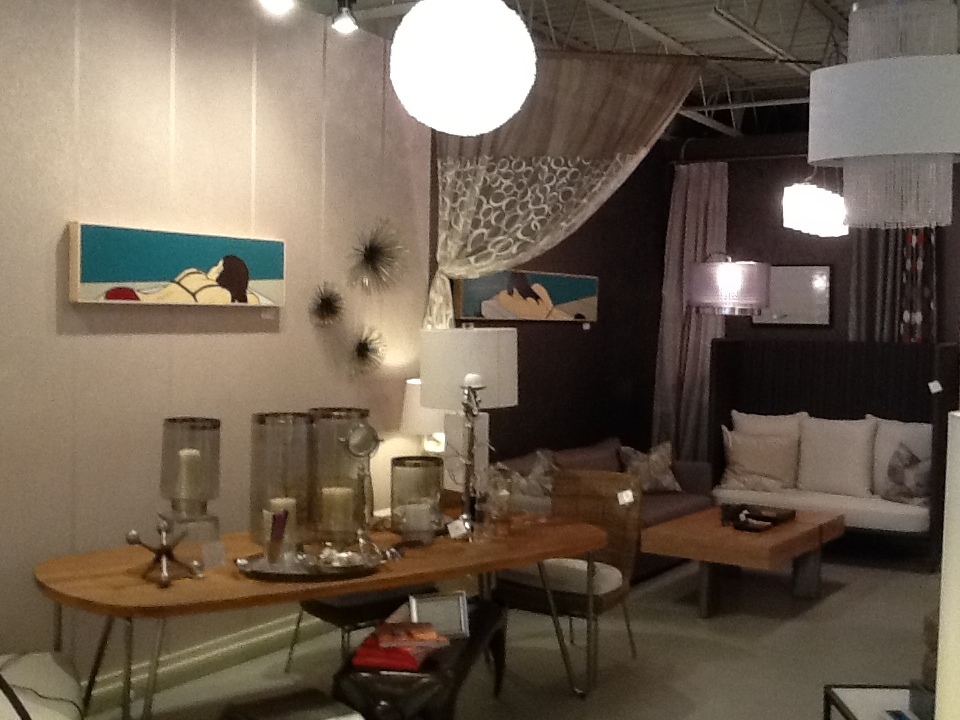 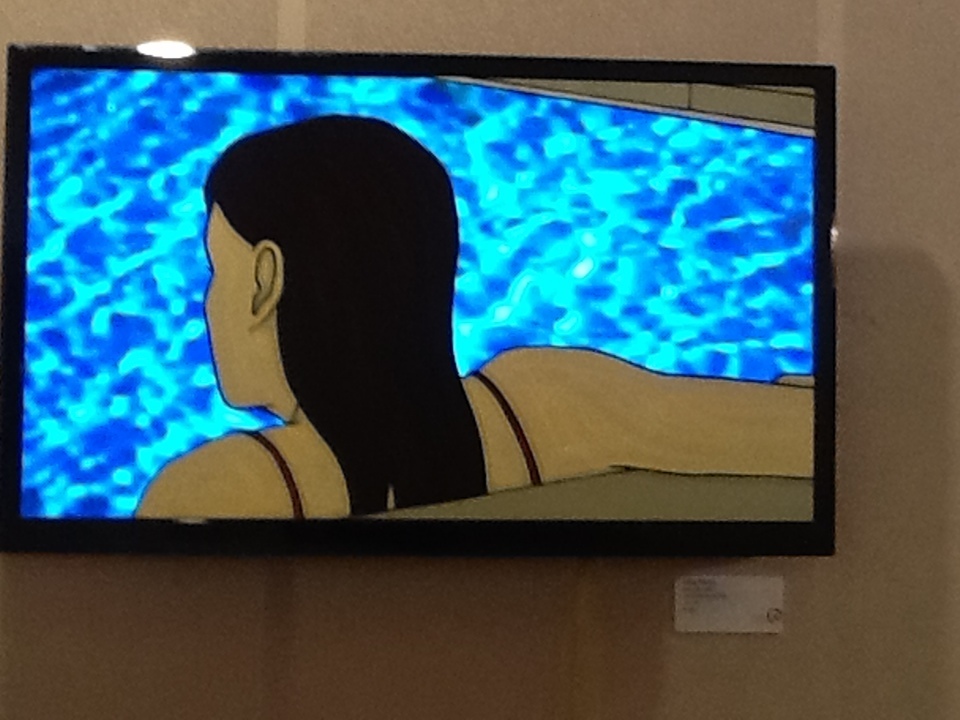 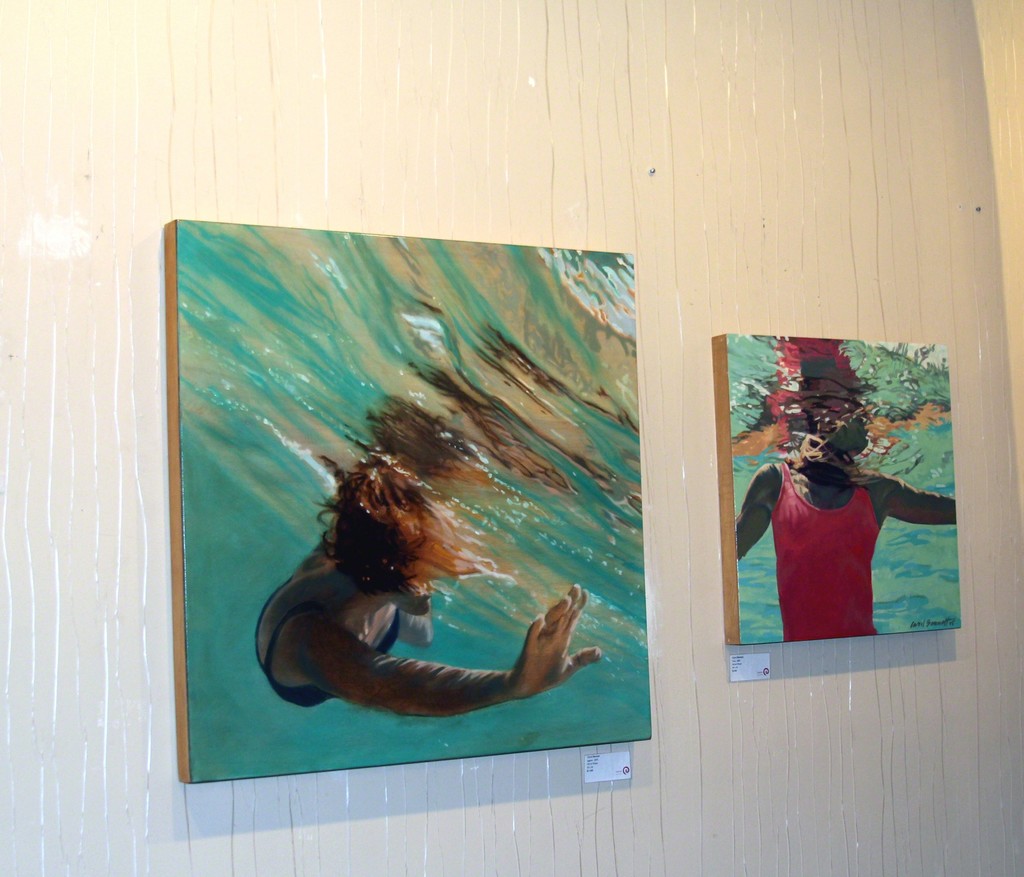 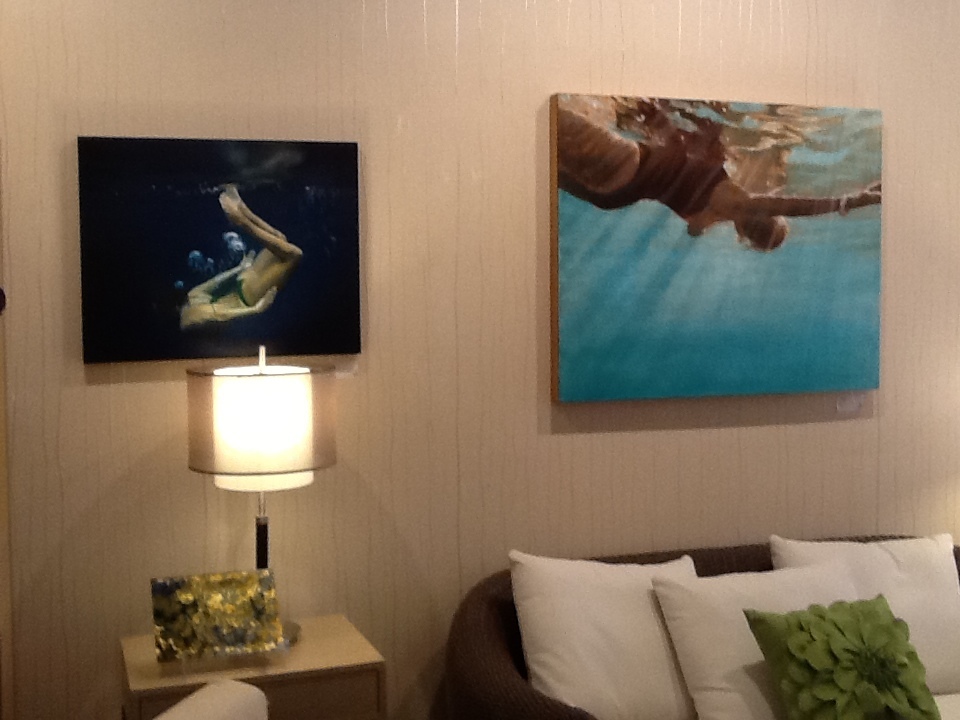 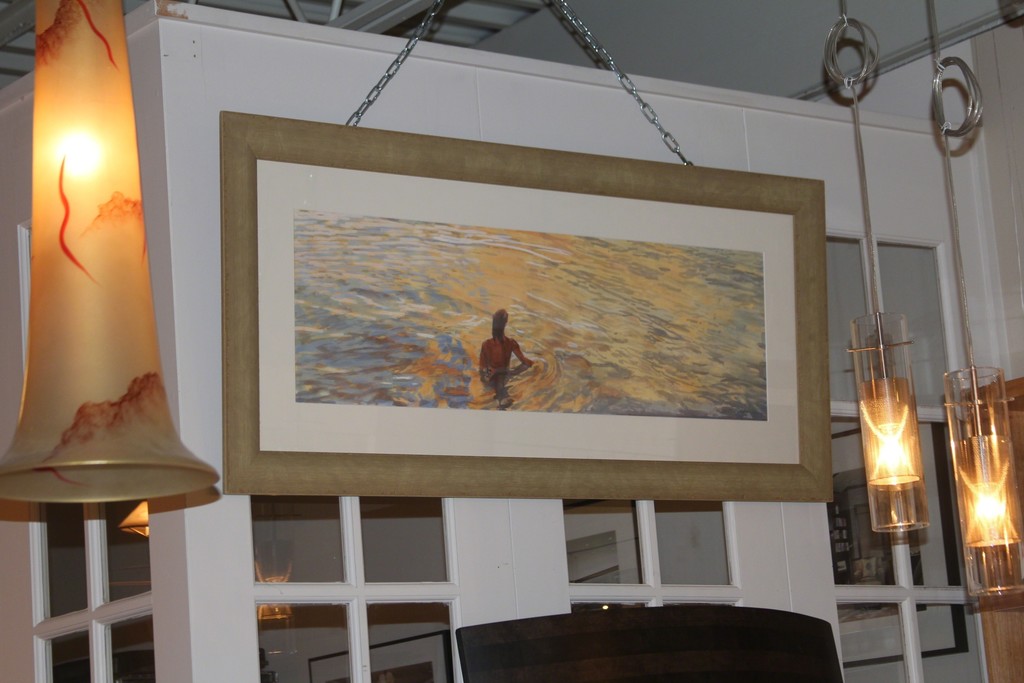 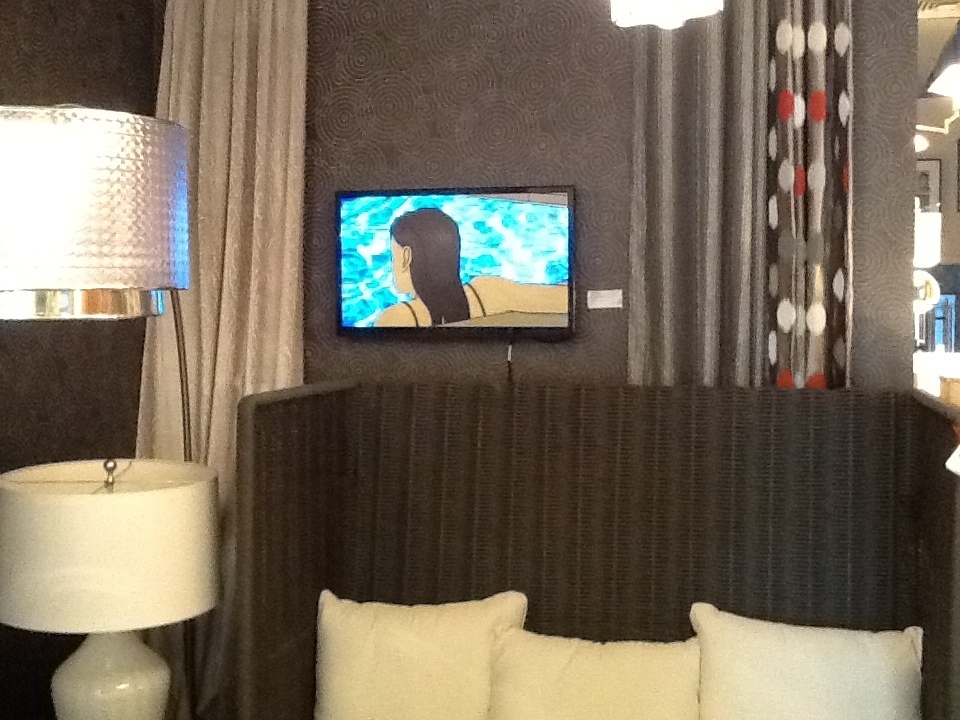 This is the first exhibit debuting our newest gallery artist, hyperrealist Matt Story. We will also be debuting a paint and video “painting” by Jeffrey Palladini. The exhibit will run from June 15 through July 27 2015.

Each of our artists has a different relationship and significance for focusing on water and underwater movement. For Story, water serves as a metaphor for “a deeper self-birth, cleansing and baptism.” His paintings draw their inspiration from underwater photographs, including a recent shoot in New Orleans in 45 degree weather in an outdoor pool.

Bennett uses water as a meditative journey through space and life. Her fascination with the swimmer imagery began when she was living in Los Angeles and swimming at the LA Athletic Club. According to Bennett, “The floor beneath the pool, with its ethereal skylight, was an underwater observation room...used by Olympic coaches in the 1920's. I would feel like a voyeur, watching the swimmer's private time and drawing in their beauty. I became the swimmer I observed in the images I later created.”

Water and swimming pools specifically, have been featured in Palladini’s work for years, initially developed as part of his Hotel Series. According to Palladini, “In addition to reflecting the work of influences like David Hockney and Eric Fischl, these works also originate from my youth in Southern California, and have come to symbolize for me not only the calm normally associated with water, but also a deep sensuality and intimacy.”

Palladini is also using the water in his new series of work – combining painting and video -- to focus on the duality between stillness and motion, the passive and the active, and the tension created between the two. The painted figures in the foregrounds physically occupy our tangible world, but are inert, motionless while the world and water in this case, moves on without them. They are passive in the truest sense, helpless or unwilling to effect events unspooling around them.

About the Artists:
Carol Bennett
She is a native of Los Angeles, who has spent the last 20 years living in Hawaii in Kaua'i. She spends all of her
time surrounded by water, and a great deal within it.

Carol's work has been featured in many solo and group exhibits throughout California and Hawaii. Carol has
created a number of public art commissions worldwide including “Water as a Point of Departure” for the Nawiiwili Harbor in Oahu and a 48' x 8' photovoltaic glass canopy for the Hawai'i State Art Museum Sculpture Garden. Her work is in numerous public and private collections including The Contemporary Museum of Art (Hawaii) and The Persis Collection of Contemporary Art.

Jeffrey Palladini
Jeffrey Palladini’s unconventional portraits evoke feelings of sensuality and euphoria. While the San Francisco-based artist studied at California State University, it was in Florence that his true creative spirit was pulled forth from the beauty that surrounded him.

Now his modern figure paintings breathe life with vibrant colors and flowing brush strokes. Unlike many portrait paintings, Jeffrey minimizes the amount of detail and information allowing the viewer to gain intense suggestions of emotions in an instant. The simplicity is reminiscent of Alex Katz.

Palladini has exhibited his work around the U.S. and the world for over twenty years. His work is included in numerous private and corporate collections. Most recently, Palladini was honored with an SFMOMA SECA Award nomination, and in 2013 was named one of San Francisco's Top 20 Artists by Asterisk Magazine.

Matt Story
Matt Story studied art from an early age and demonstrated a unique skill for rendering verisimilitude, or hyper-realism. "I was lauded for 'photo-realistic' technique, but I was never after that, really, after what a camera impartially sees, because there's so much more there, captured only by the human filter of memory. We all possess these invisible imprints, through experience and living, but often its only artists who can play it back for us, to remind us. The paint surface needs to be a mirror for the viewer, reflecting back not his or her superficial self, but a deep shared humanness. This is the essence of looking at a piece that's totally unfamiliar to you and yet, being awed with a sense of recognition. "

Story has worked for over twenty years from his studio in Los Angeles but in mid-2013 began traveling with his wife, first with a long hiatus on the Isle of Palms near Charleston, South Carolina, and recently a long stint near Santa Fe, New Mexico and New Orleans where he paints today. His method of oil painting on canvas and panel closely resembles the classical method, used for centuries by masters such as Titian and Caravaggio, two of Story's heroes, fastidiously building up thin glazes, painting "fat over lean" with traditional materials. His work is included in private and corporate collections in the United States, Europe and Asia.

The Design Studio and client projects have been featured in The New York Times, Newsday, Hamptons Magazine, Home Journal, Homes of the Hamptons and Hamptons Cottages & Gardens (HC&G). The Design Studio was a finalist in the HC&G Innovation in Design Awards in the Interior Design category (2012), participated in the HC&G Holiday House NYC (2013 and 2014) and in 2014 was featured on Open House NYC and Housewives of New York.

Founded in 2007 by Lisa Cooper, Elisa Contemporary Art is dedicated to promoting the appreciation and collection of art as a way to enrich and heal our lives, our communities, and the world. Elisa Contemporary Art has participated in international art fairs in New York, Miami and the Hamptons, and curated over 15 public art exhibits in the Tri-State area. A portion of every gallery sale is donated to charities helping underserved children heal through art. We support Free Arts NYC and Art Therapy Outreach Center.

Elisa Contemporary Art has been featured in a number of publications including Ocean Home Magazine, Hamptons Cottages & Gardens, New York Spaces and The New York Times. For more information, visit the website at www.ElisaContemporaryArt.com