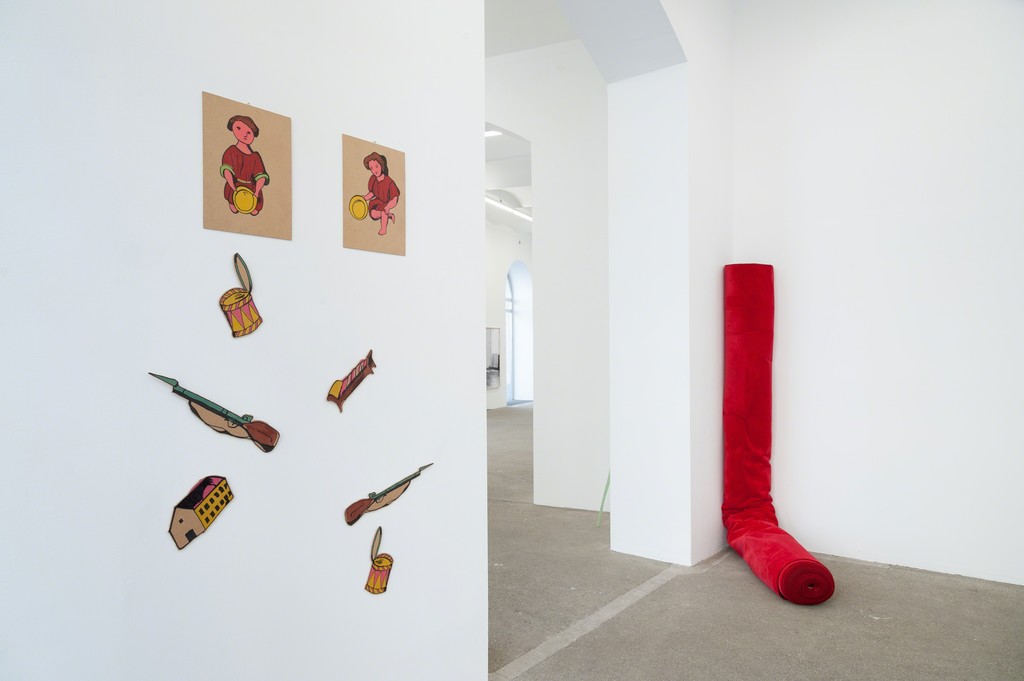 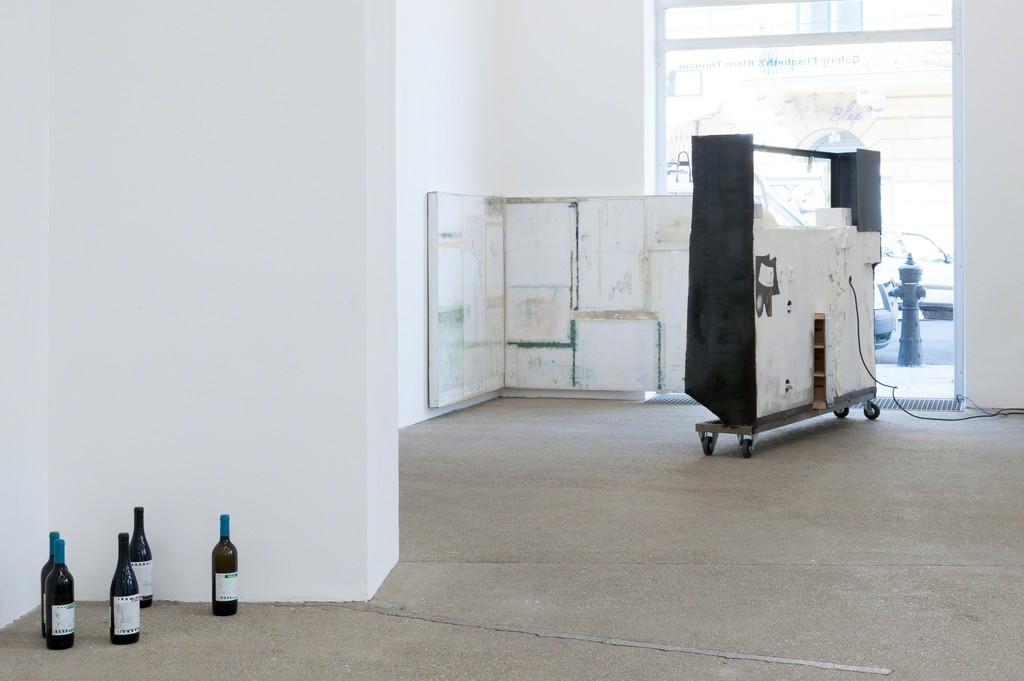 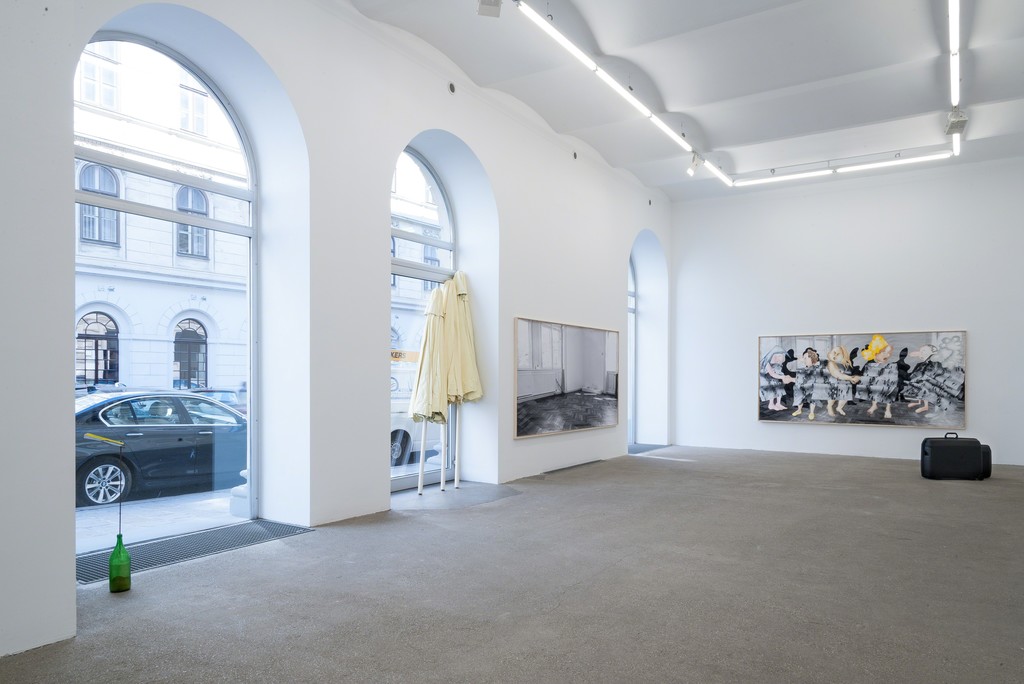 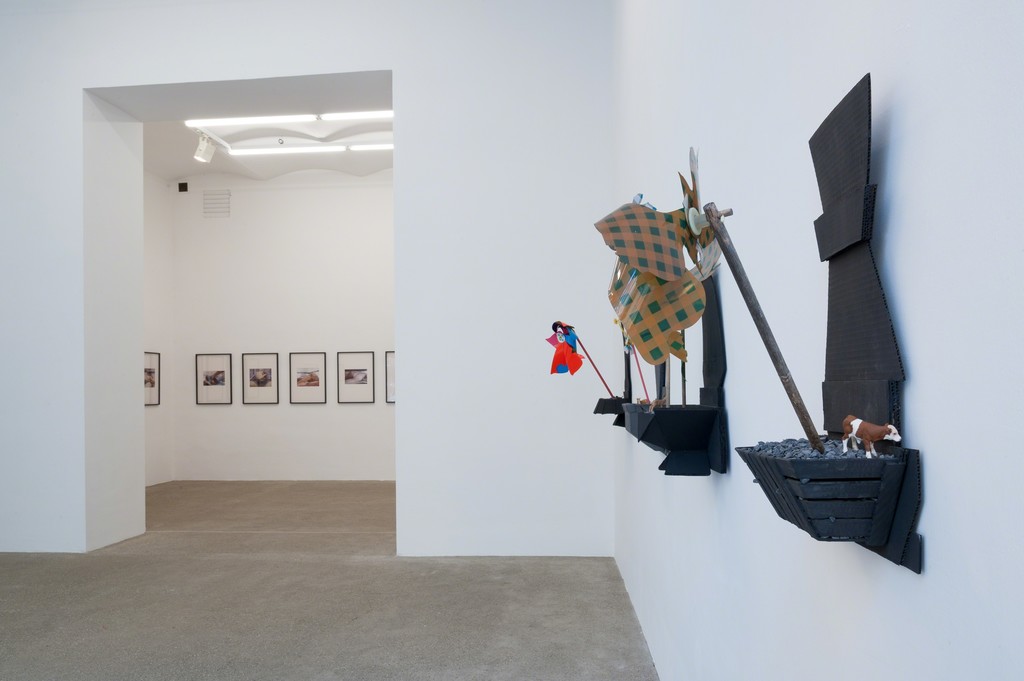 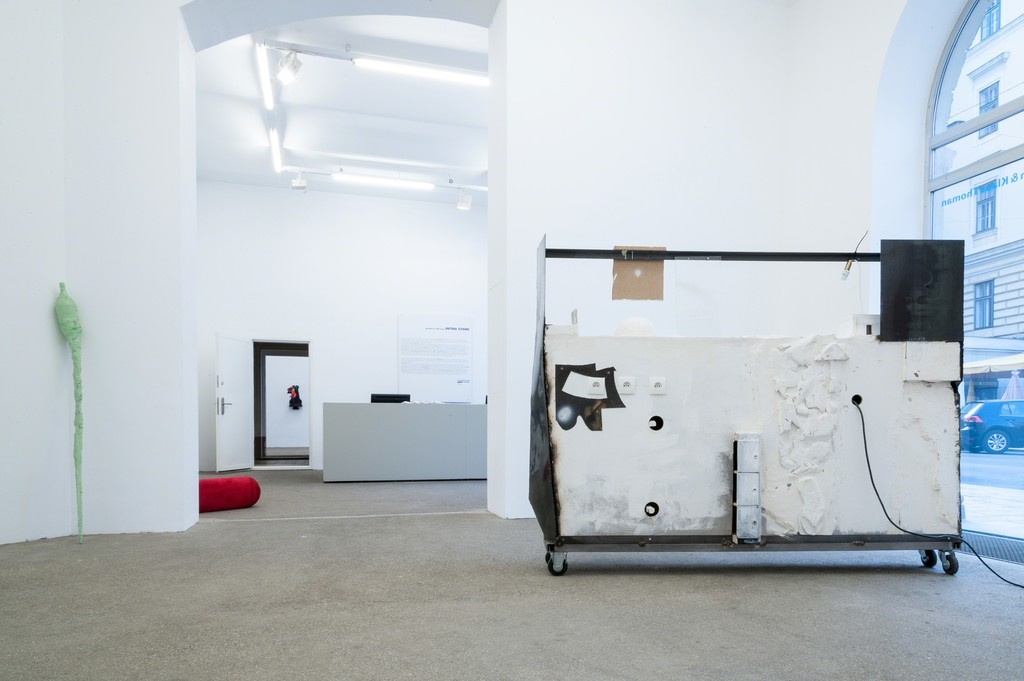 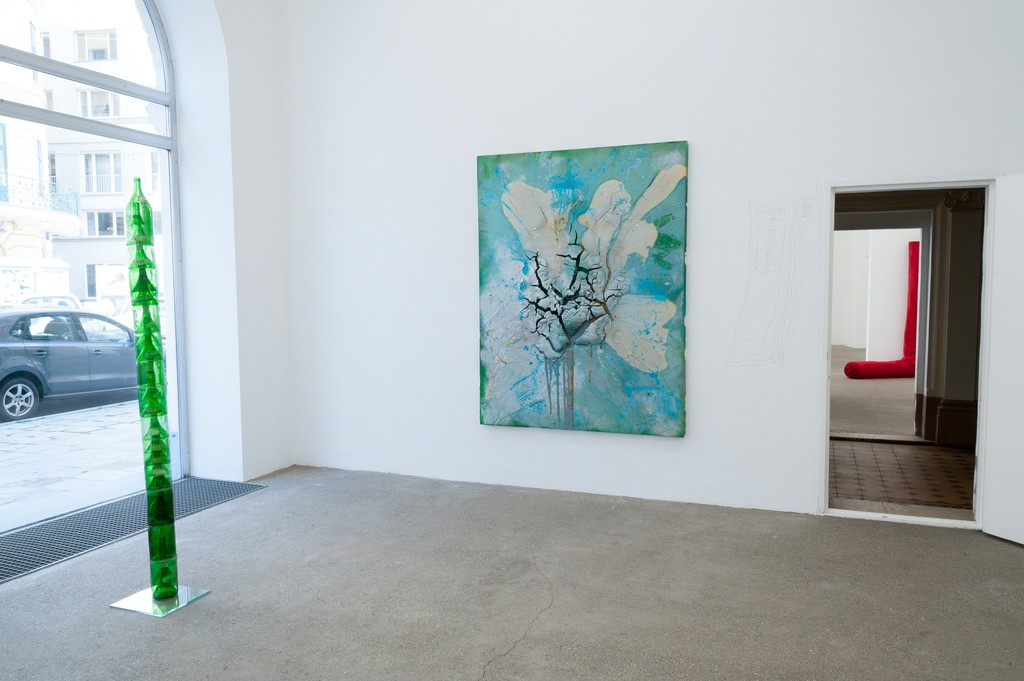 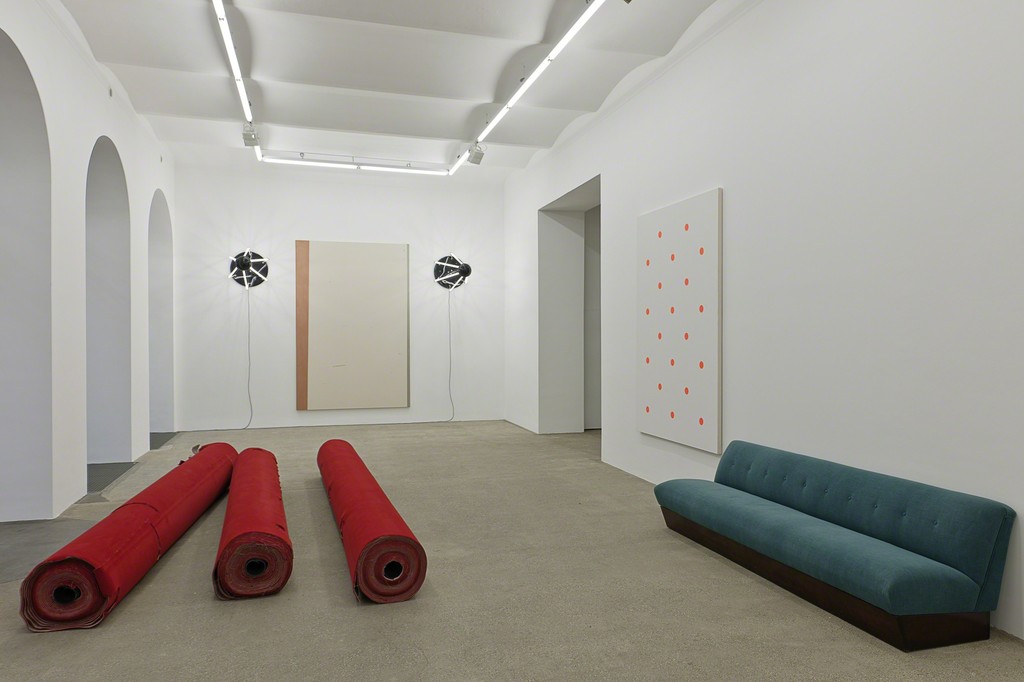 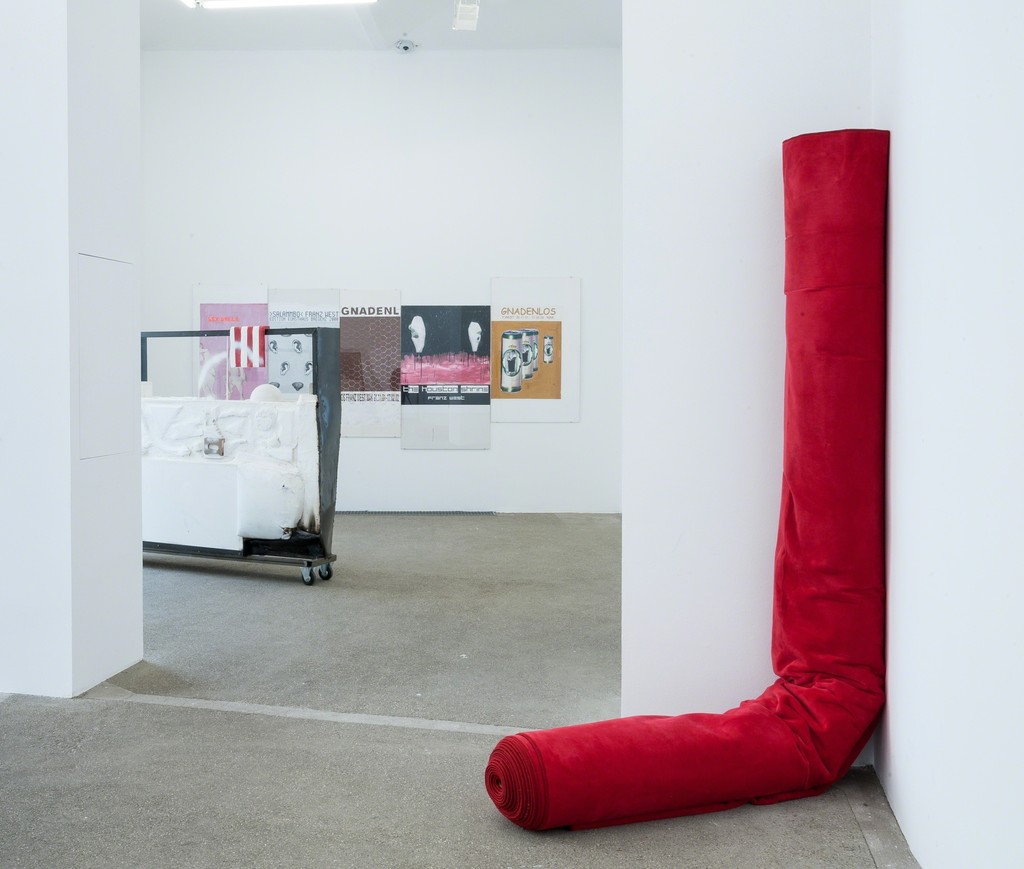 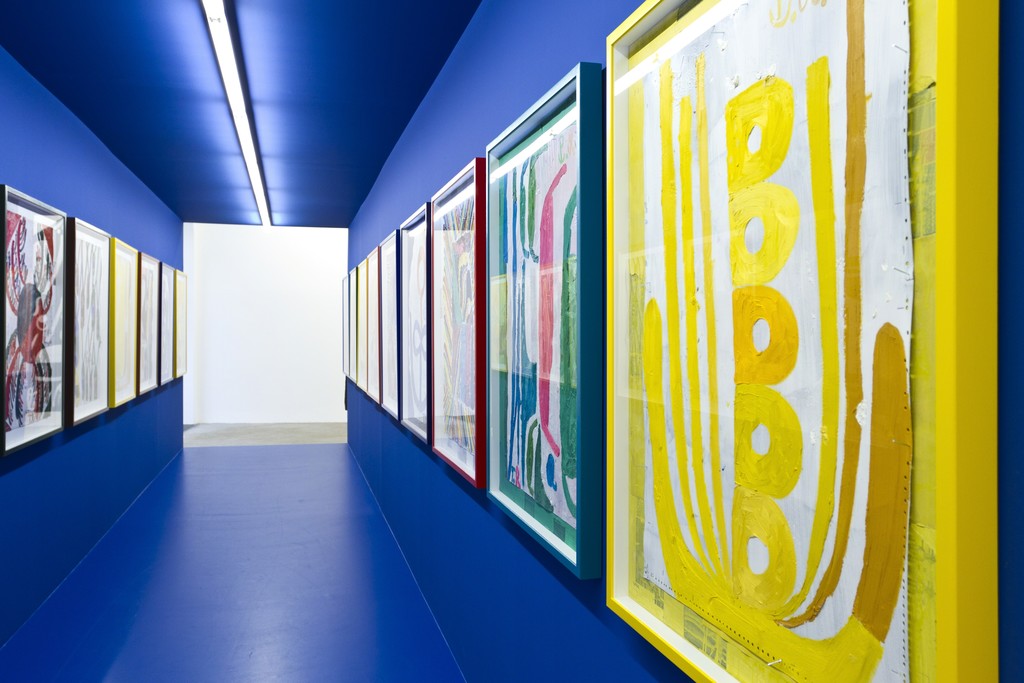 Today and tomorrow lead to yesterday again and again, especially in Vienna. Neïl Beloufa’s ( 1985, l. in Paris) use of objects and installations reflects a seizure of existing structures, usually engaging with the capitalist and imperialist values. We are safe now is the name of the installation. Beloufa’s partitions and tectonic elements appear to have arisen from a counterworld - they are set pieces of a science-fiction world in which health and world dominion are considered equal.
Franz West (1947-2012, Vienna) responds to this scenario with unique copies and multiples of prosperity, indulgence, and a grotesque simulacrum of related artifacts. Eating and drinking are the prolegomena of mental activity as it were, fostering discourse. Directives and images represent the general misconception between language and image. Anne Speier (1977, l. in Vienna) puts forward collages in which mutual discussion stakes off a social hierarchy.
Alexander Wolf (1975, l. in Vienna) presents a critical homage to Maria Grengg (1889-1963, Vienna), the Austrian picture-book illustrator who gave her ideal world over to the Führer; she inspired Wolf to create fantastical artistic works. Carmen Brucic ( 1972, l. in Tyrol and Vienna), with her cryptic photographs of the Josephinum teaching collection, shows how very proximate enlightenment and decadence, surgery and eroticism are. John M Armleder ( 1948, l. in Geneva and New York), Michael Kienzer (1962, l. in Vienna), the FORT (Jenny Kropp 1978, l. in Berlin, Alberta Niemann 1982, l. in Berlin) group, and Rudolf Polanszky (*1951, l. in Vienna) reinforce the mist of historical haze. A strange history is illuminated and becomes beholden to capital. Through the accumulation of artifacts (objects) and images, a horizon opens for the emergence of history at a site of present-day consumption, culminating in a merrily macabre roundel. Its romantic and humorous ideas are quick to operate as warning signs that project into the world of tomorrow.
Veit Loers

Veit Loers (*1942) is active as author and curator in German-speaking countries since 2003.