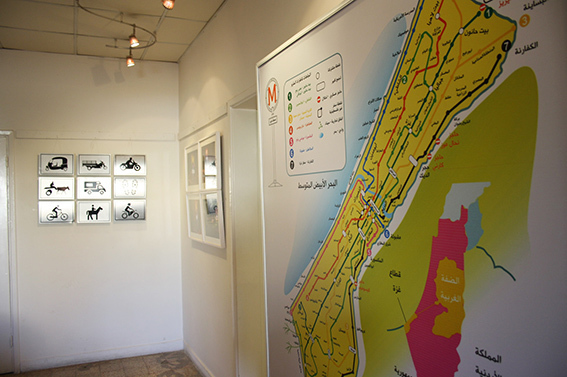 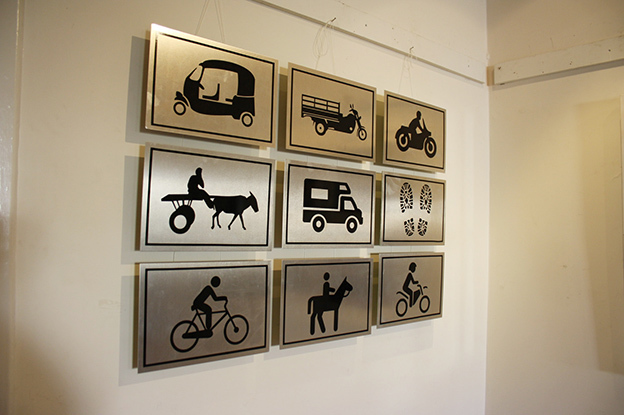 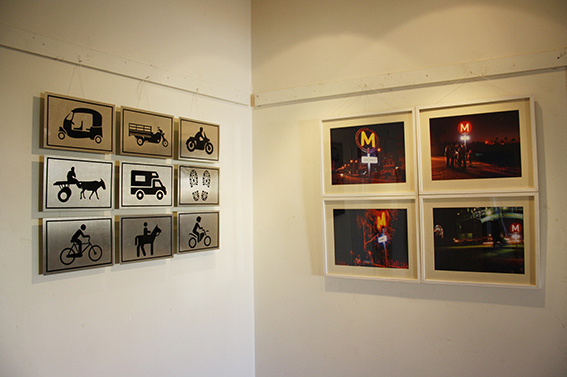 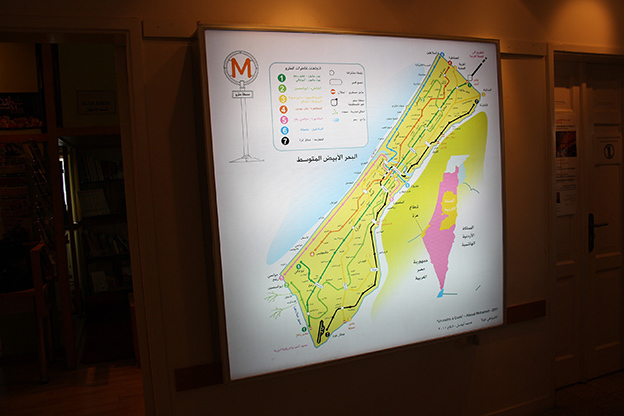 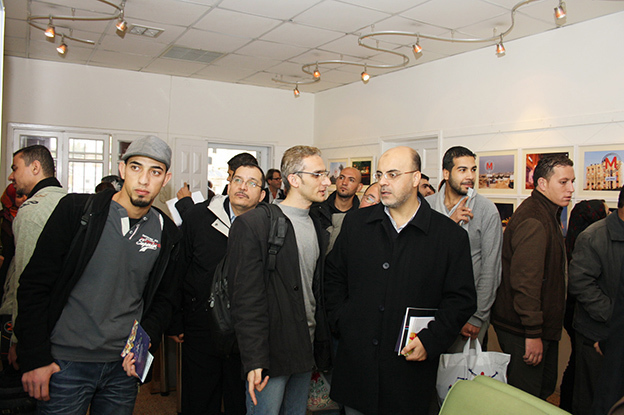 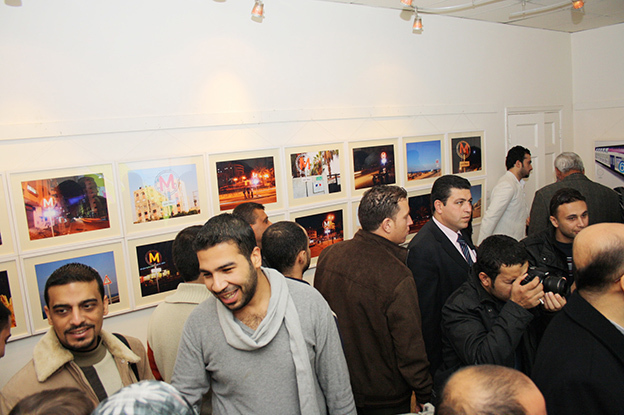 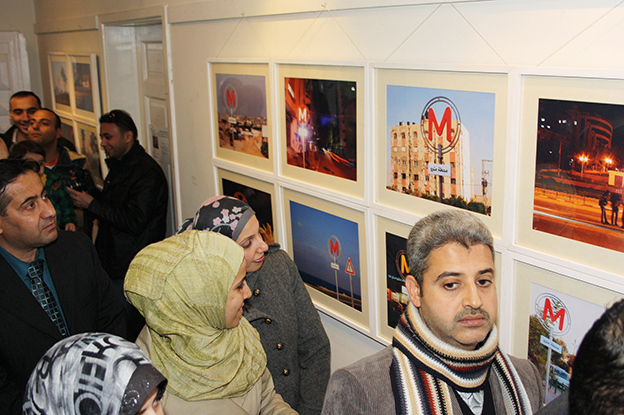 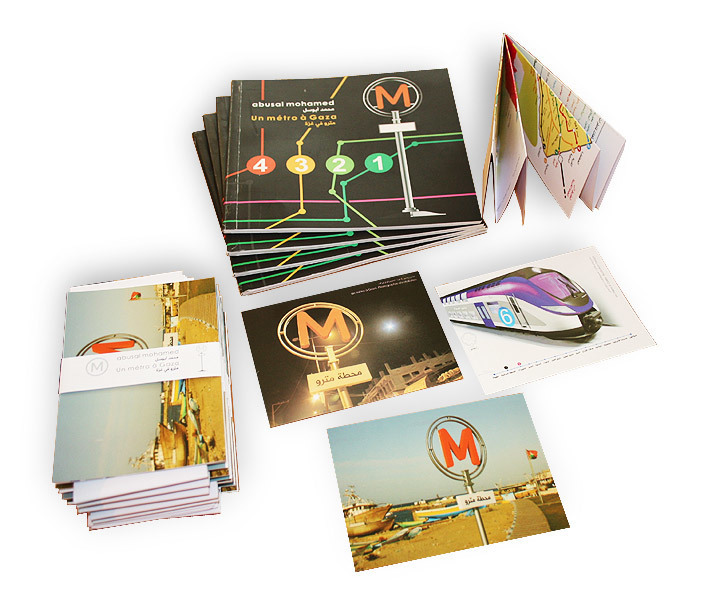 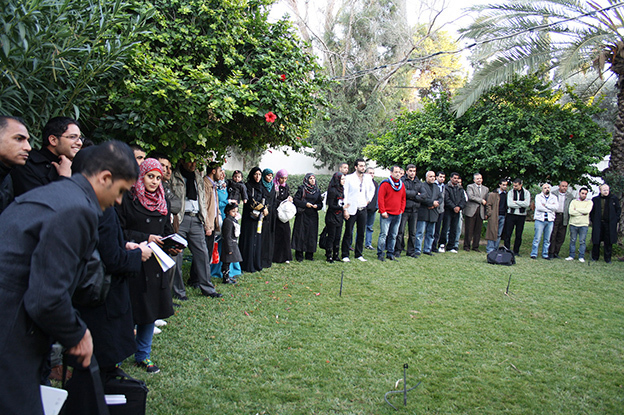 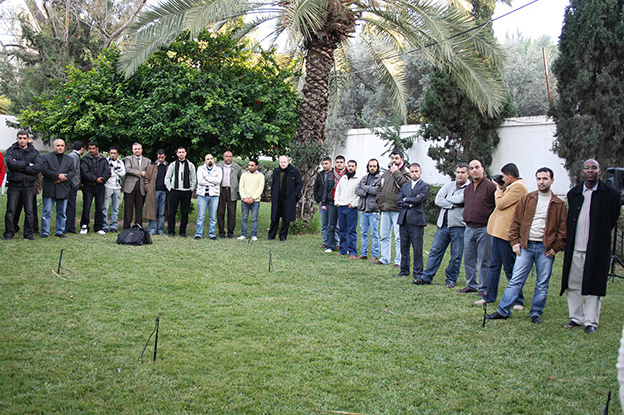 a Metro in Gaza

Whenever there is traffic congestion in Gaza, Abu Sall thinks of a metro station sign. It would be perfect if such an underground station was built to transport people, their children and baggage to their destinations! Such a project would entail having power generators, the driving force behind such a metro station, as well as high standards of cleanliness, order, punctuality and passenger safety. These elements should still be in place despite the raids, people’s poverty, and the intensification of the blockade. Abu Sall’s musings are a product of a momentary, dreamlike and visionary state, brought on by his being in the very spot where he envisions a metro sign.

Mohammed Abu Sall proposes a network of seven metro lines to connect the different areas of Gaza Strip. Line number 1, or the Green Line, stretches in a straight line, passes along many stations and extends along the Gaza Strip, connecting the Erez checkpoint with the Rafah crossing. A line of this sort would need to be direct, central and fast in order to enable the inhabitants of the Gaza Strip to arrive to the main crossings as early as possible. Travellers on Line 1 would be able to change at a central station in the heart of the Strip so that they could then use Line 2 or Line 3. These lines would be winding so that they could reach the areas to the right and left of the Gaza Strip. They would also pass through most of the cities and the main areas of the Gaza Strip, reaching the border cities or the other crossings, including Jabalia, Al-Shate’, Al-Breij, Al- Maghazi, Al-Nseirat, Deir Al Balah, Khan Younis and Rafah. These would be the stations in the proposed metro system and they are also the refugee camps which bear witness to a lot of comings and goings as the population there can reach up to 55 thousand inhabitants per square kilometre.

The Second Line begins from the coast but terminates at the Philadelphia Route, (which extends along the Egypt-Gaza border), at two stations called Al Anfaq A and Al Anfaq B. These are also known as the Commercial Anfaq (tunnels) and are used to smuggle people and goods alike from and to the rest of the world. The two lines running along the coast: line number 6 (in blue) coming from the north and number 5 (in pink) and coming from the south, traverse the whole of the Strip from its narrowest point to the East of Al Maghazi by passing through the central station. In the event that the airport is rebuilt, then line number 7, (in black) would be responsible for transporting passengers to the airport, and passing by the stations of all three crossings as well as many other areas.

To that end, Abu Sall makes an illuminated metro sign in the form of a large, red electric pole and at the top he affixes a large letter M. He wavered between using the Latin letter ‘M’ as a sign for the metro and arabizing it and using the Arabic letter ‘م’. However, there is no distinct meaning attached to the Arabic letter ‘م’ neither in the Arab collective memory, Arab culture nor local culture for that matter which would tie it in with a mode of transport. He therefore decided to use the international symbol ‘M’ with the words ‘metro station’ written on an illuminated plate underneath it. He sets off to fix this sign wherever he imagines the metro stations should be. He hesitates after having been warned by some advisers that he may come under suspicion from the Israeli surveillance teams who may mistake his ‘Metro’ pole for a rocket which could be used to launch an attack on nearby settlements. He will discover that it is impossible to carry an iron pole and to roam around freely, despite its being an artistic project. He will also come to the realisation that if he ventures to do this, a dreadful bomb attack could befall the area, endangering the safety of the artist as well as that of the locations he dreams will become the metro sites.

In a move akin to a freedom fighter’s military operation, Abu Sall fixes his only metro sign beside gardens, a petrol station, a thoroughfare, a market, at the entrance to the city, at the site of a new development, near the beach, in front of a poster about freed prisoners, in Victor Hugo Street, in front of a primary school, near boats, in front of sweet shops, amusement parks and at tunnel exits. These locations would become the imaginary metro line which would connect all these places together in accordance with the days allocated for the photography shoot and his time. He used photography to document all these stations as well as the public’s interest in approaching the stations and their responses to them. There were two photography sessions: one during the daytime and another at night. After 13 hours of field work, this assignment, which according to the artist was interesting, tiring and full of surprises, came to an end. Despite his having authorization from the Ministry of Information, he was unable to photograph in the places which he had planned to. With only a mixture of reactions: positive, funny, naive and pessimistic from the members of the public, who had to imagine at that moment what it would mean to have a train moving underground in Gaza, Abu Sall was able to document what it would mean to have a metro for some members of the public. Abu Sall’s project is a daring, critical and scathing comment on what is deemed permissible in terms of technology and civilisation in Gaza today.