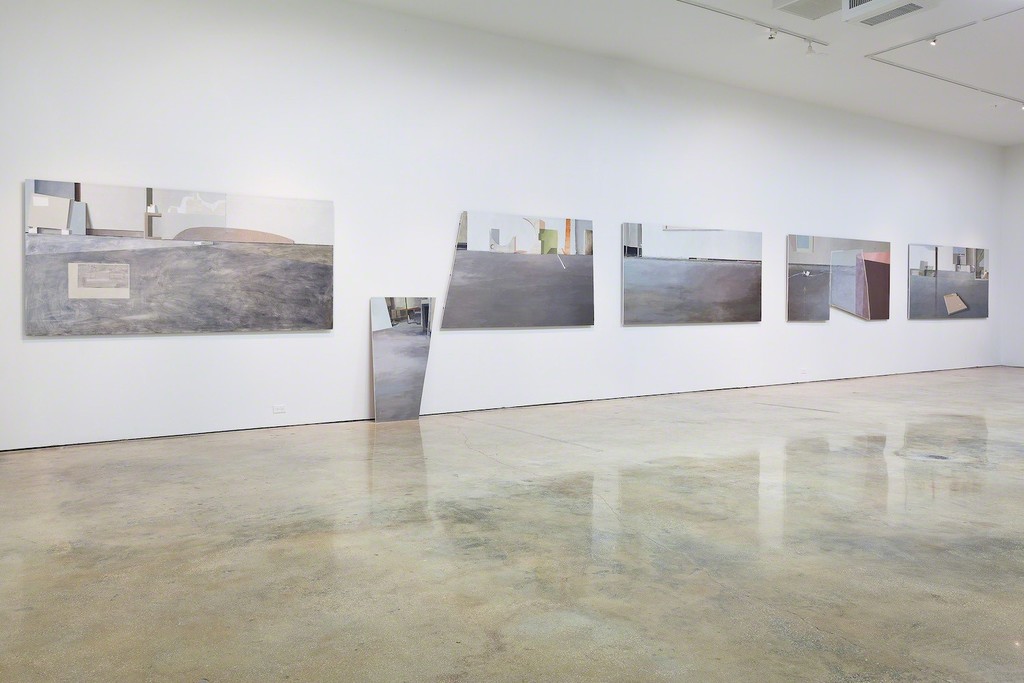 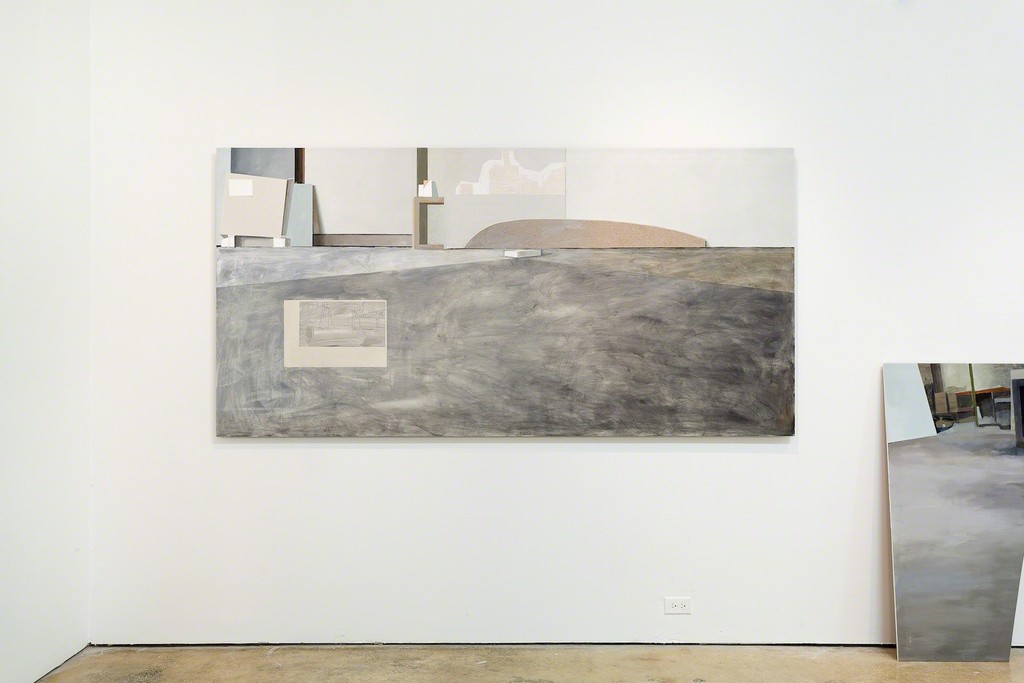 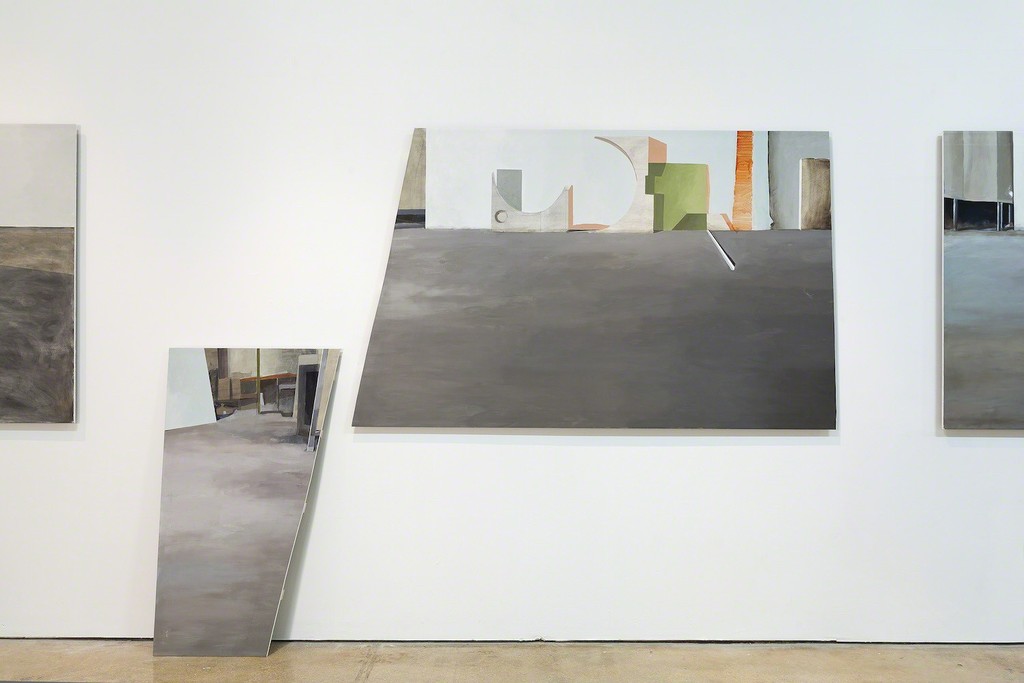 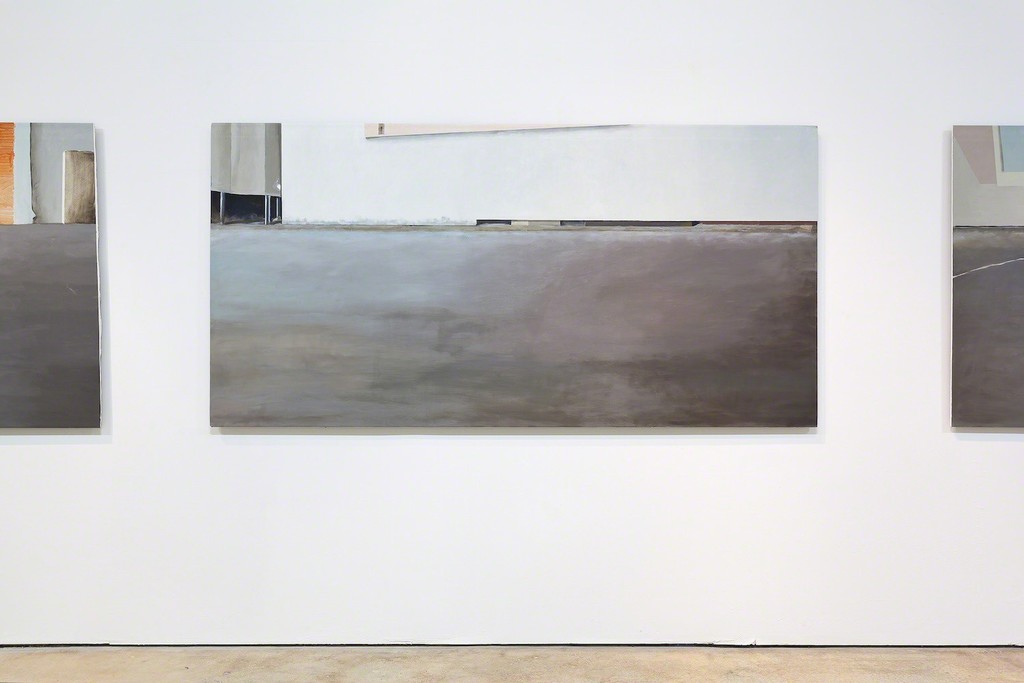 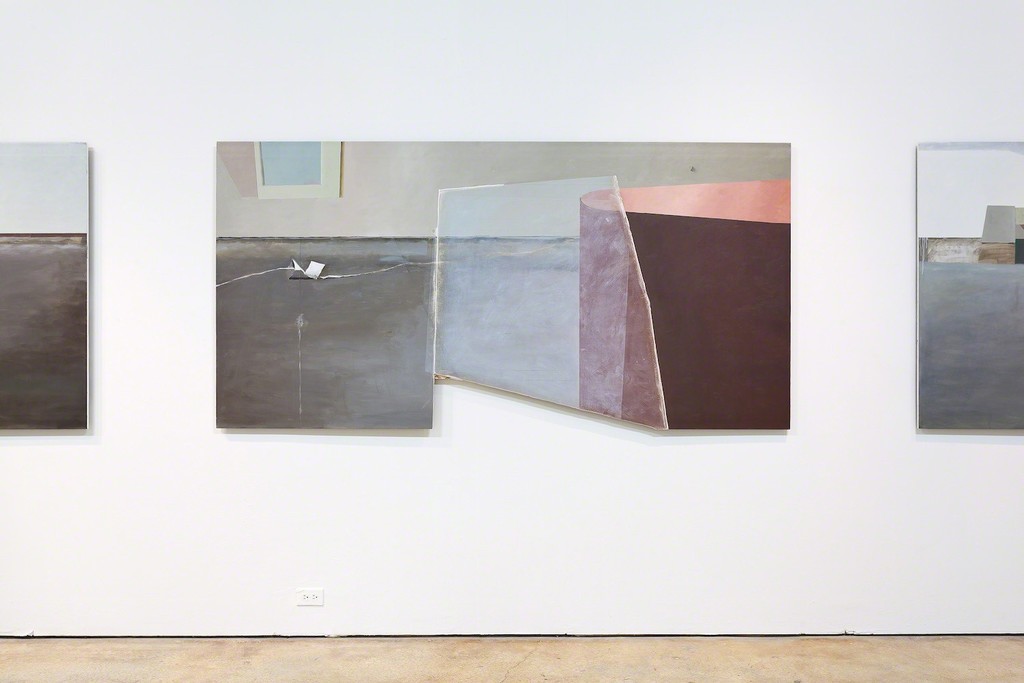 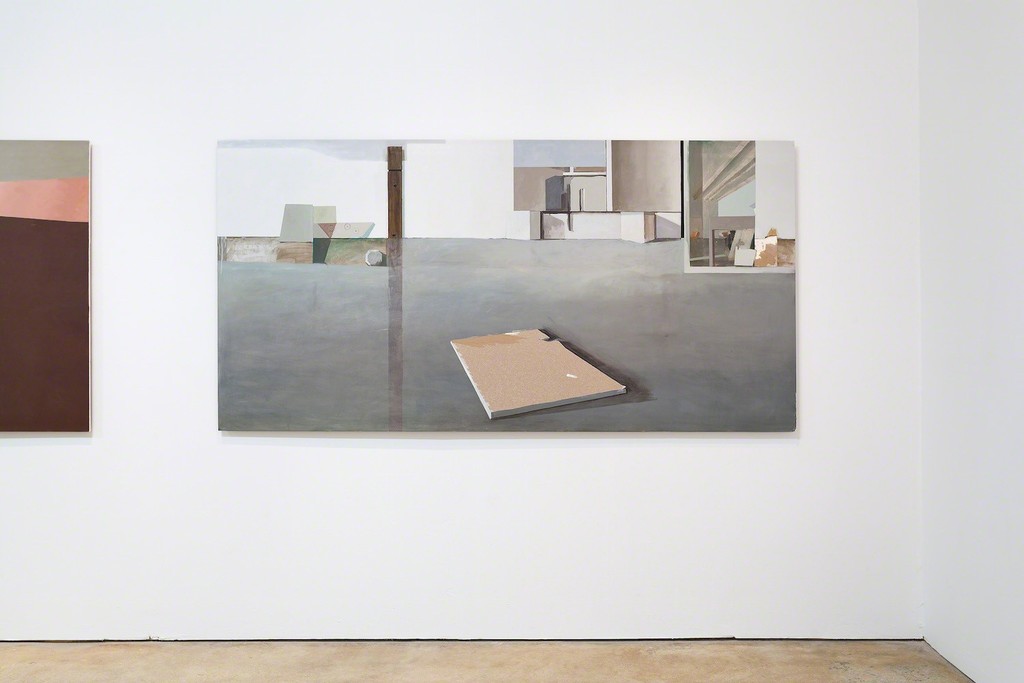 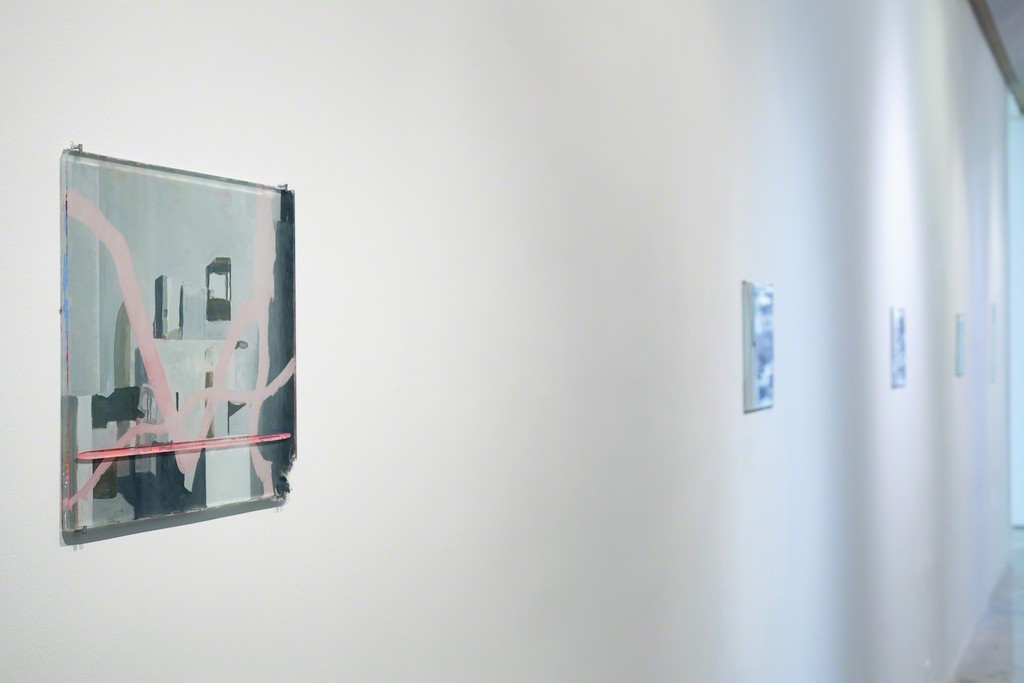 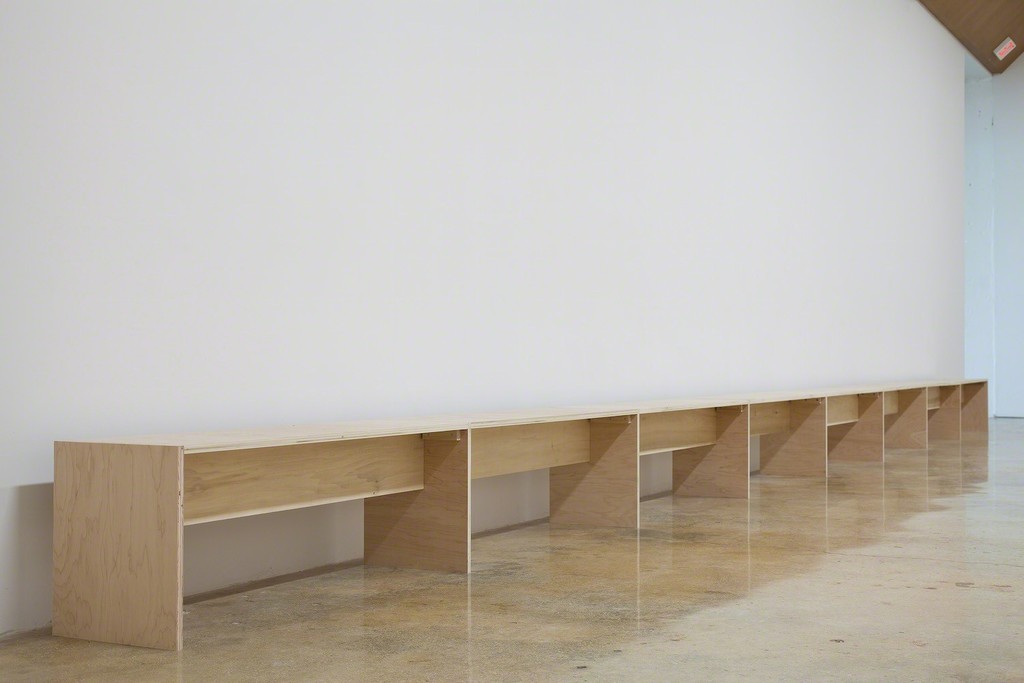 In her exhibition Noonday, Jenny Brillhart installs 5 large, horizontal paintings on the longest wall in the room. They depict the point in her studio where concrete floor meets wall, and the line between the gray and white echoes where the ocean meets the sky in seascape paintings. Together Brillhart’s studio-scapes both emphasize and flatten the threshold where two disparate forms of matter, concrete and drywall, meet. The five floors in the paintings align, making one long trajectory along the gallery’s 50-foot wall.

Other horizontal and parallel lines form between the gallery floor and the gallery wall, the wall and the ceiling, and by the handmade bench opposite the paintings. Viewed from an angle they become orthagonals, the stuff of one point perspective, which is the trompe l’oeil technique that enables drawing to represent the recession of three-dimensional space in two dimensions.

Flatness, then, is another focus, for in Noonday Brillhart flattens onto the picture plane the assemblages she has been making for the last several years – her last exhibition at Emerson Dorsch showcased some of these works. In her new drywall paintings, she depicts arrangements of debris propped against the wall or on the floor just in front of it. She also flattens the angle of the floor as it recedes to meet the wall above it. Sitting on the bench she made with Chris Page, one can observe the play of Brillhart’s heightened horizon line above her floor against gallery’s glossy floor and walls.

Jenny told me that her mission is to treat all materials with the same attention. Her mission at first seems humble. In practice however it takes a great will to resist the hierarchy of things. She treats all materials at a level with paint. Storebought drywall, wooden support, chipboard, scraps from wood working, a table from goodwill, studio space, drawings of space – all of these are the same as paint. They are all material.

Brillhart studied painting at the New York Academy for Fine Arts, where they teach a traditional sense of balance inside a painting. Brillhart’s perspective on balance extends beyond the painting itself to the material that makes it, that it depicts, the space in which it was made and the space where it is seen. Together the paintings, the room and the bench create a larger whole, of which we, the viewers, are a part, and the low bench counters the raised horizon line on the opposite wall.

Her egalitarian ethic reverbates beyond a single painting, beyond . Level, flat, equal.