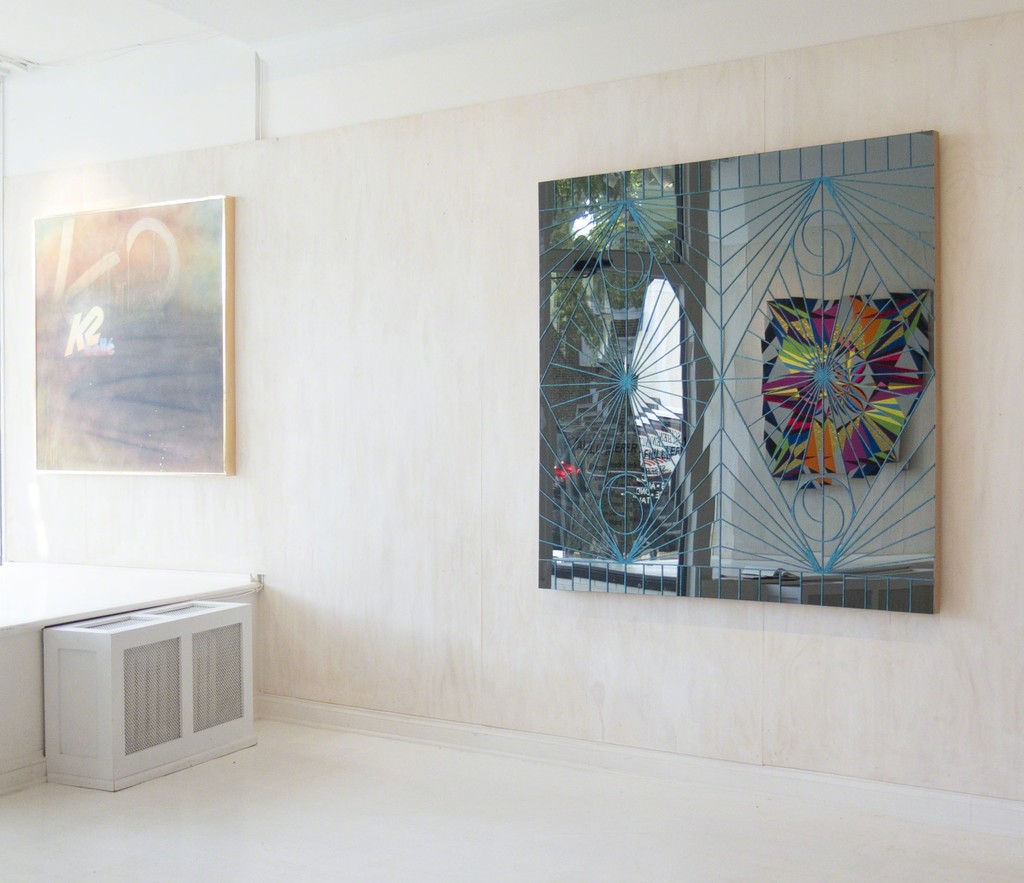 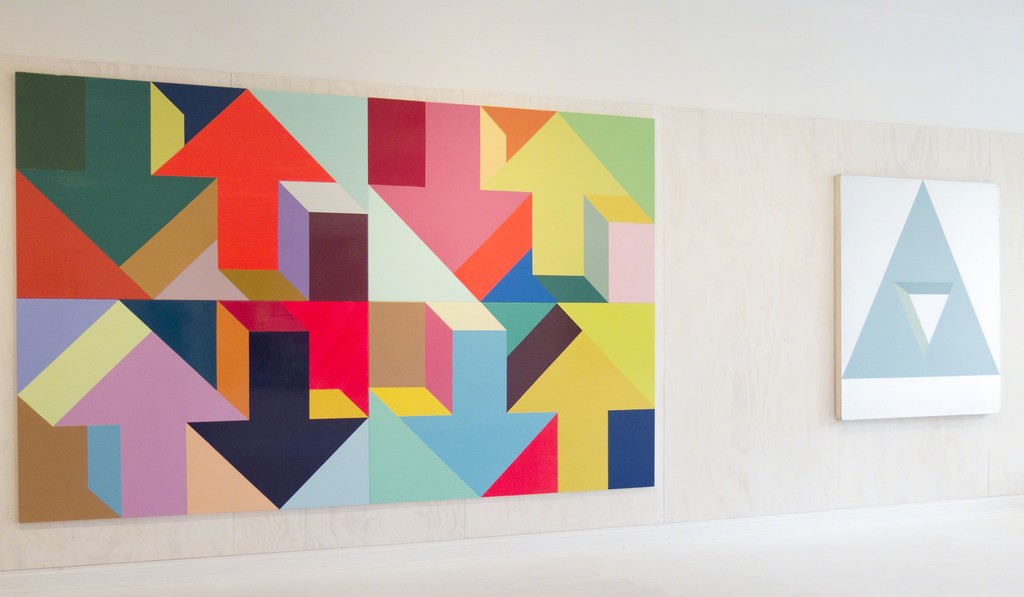 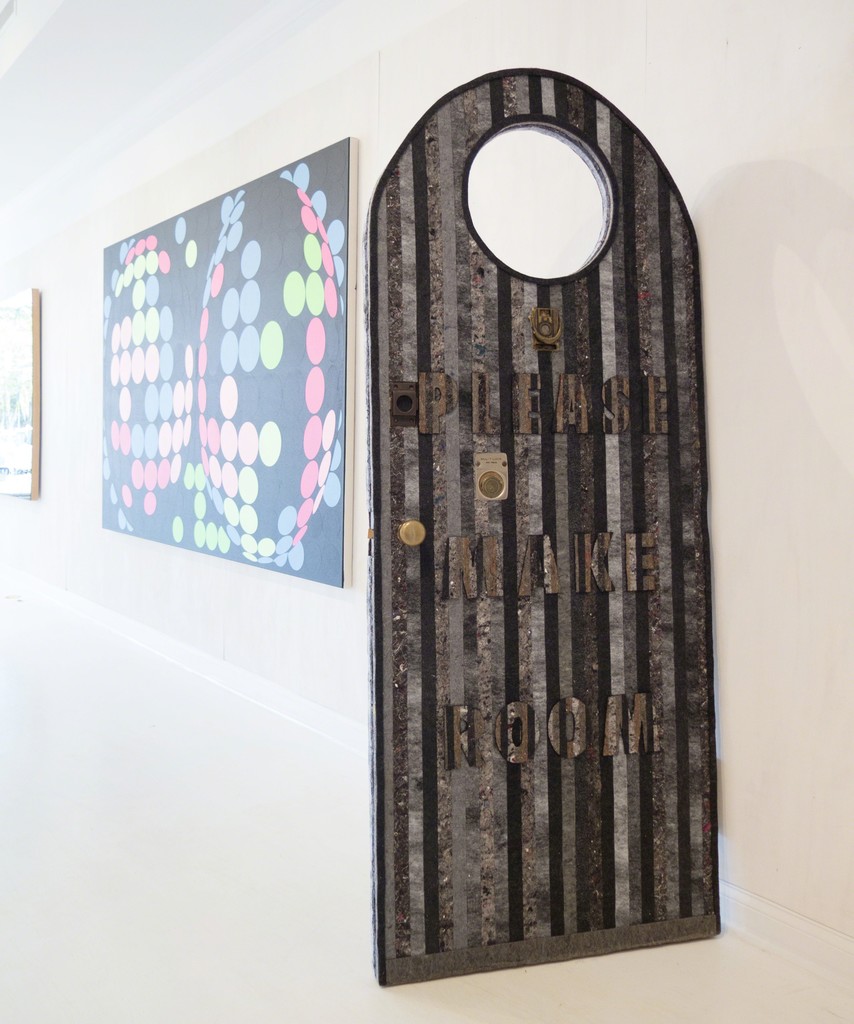 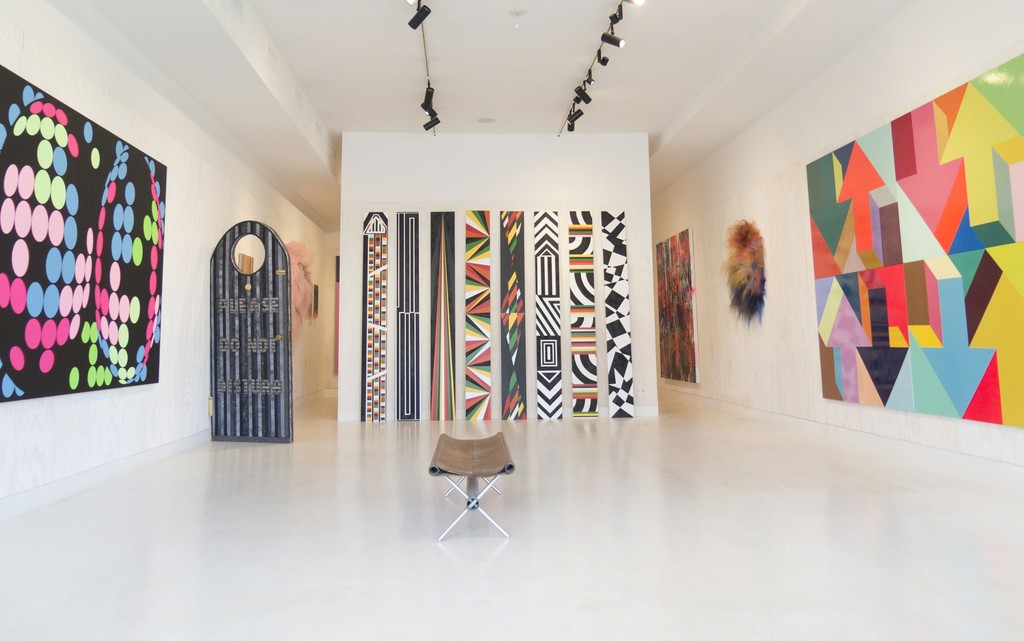 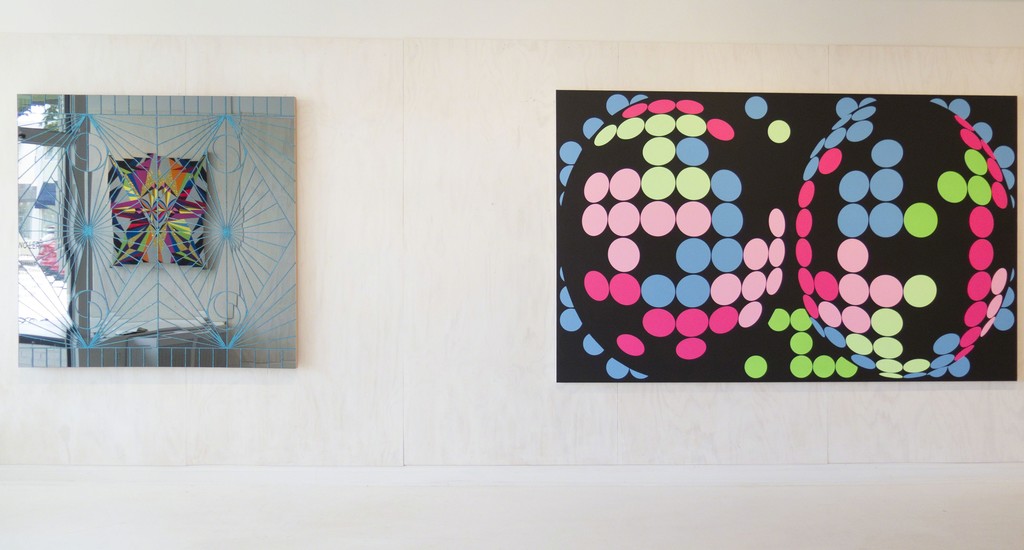 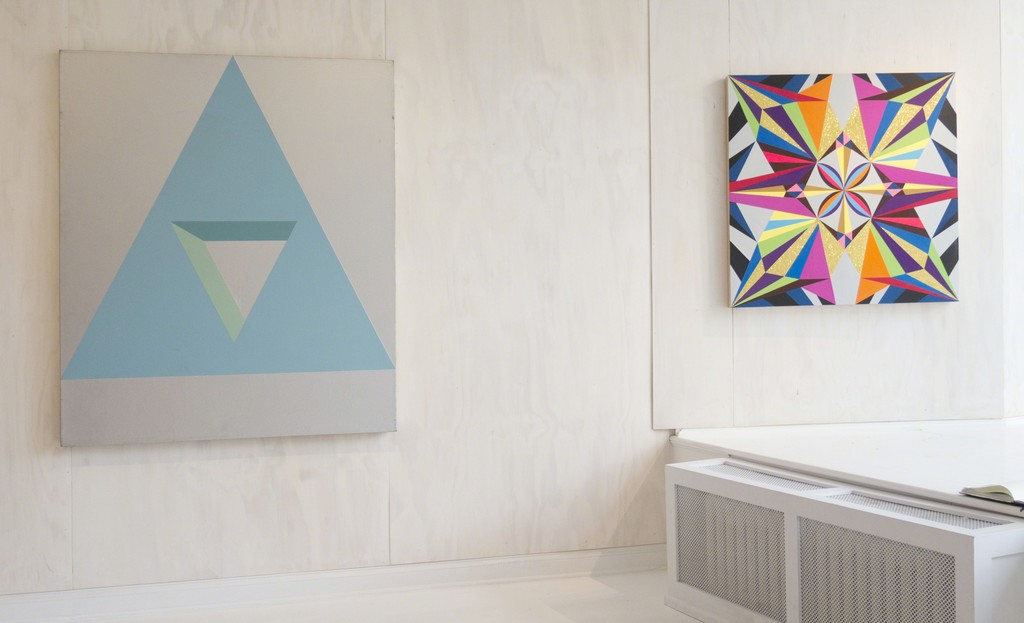 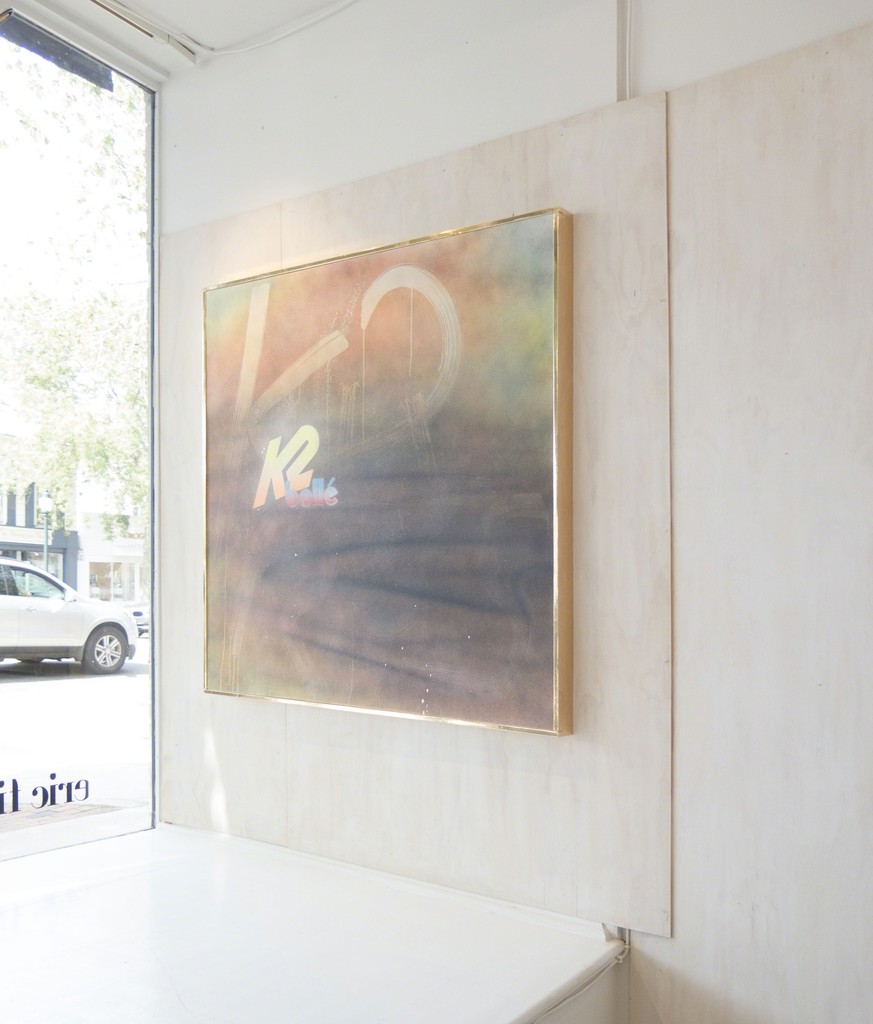 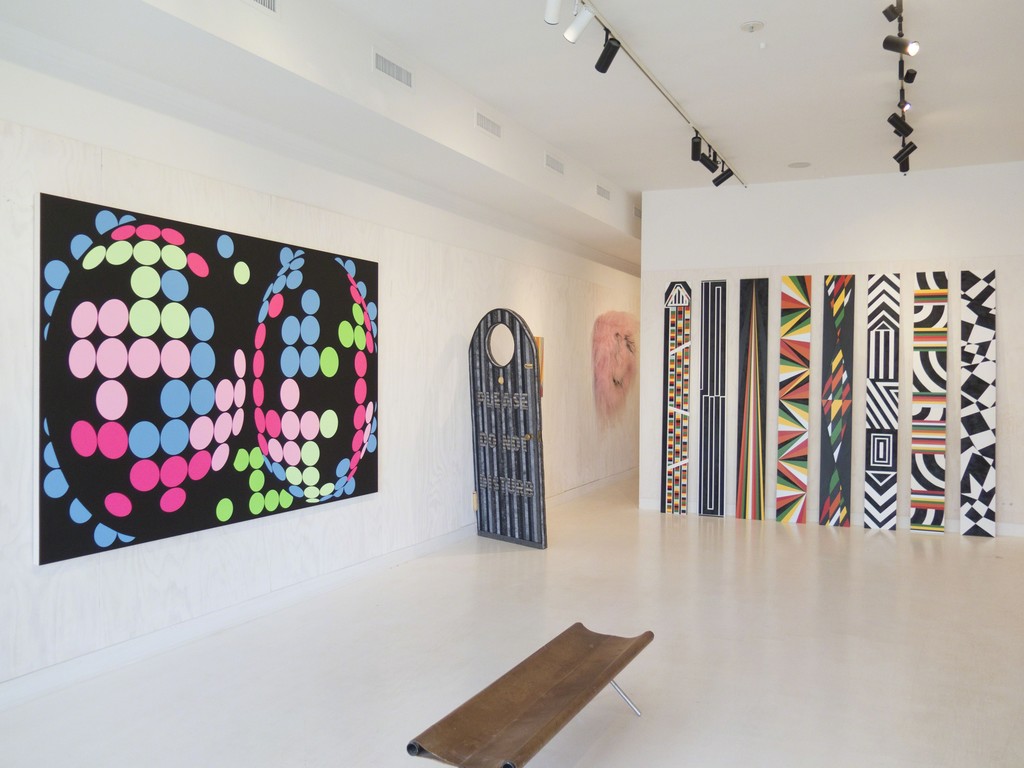 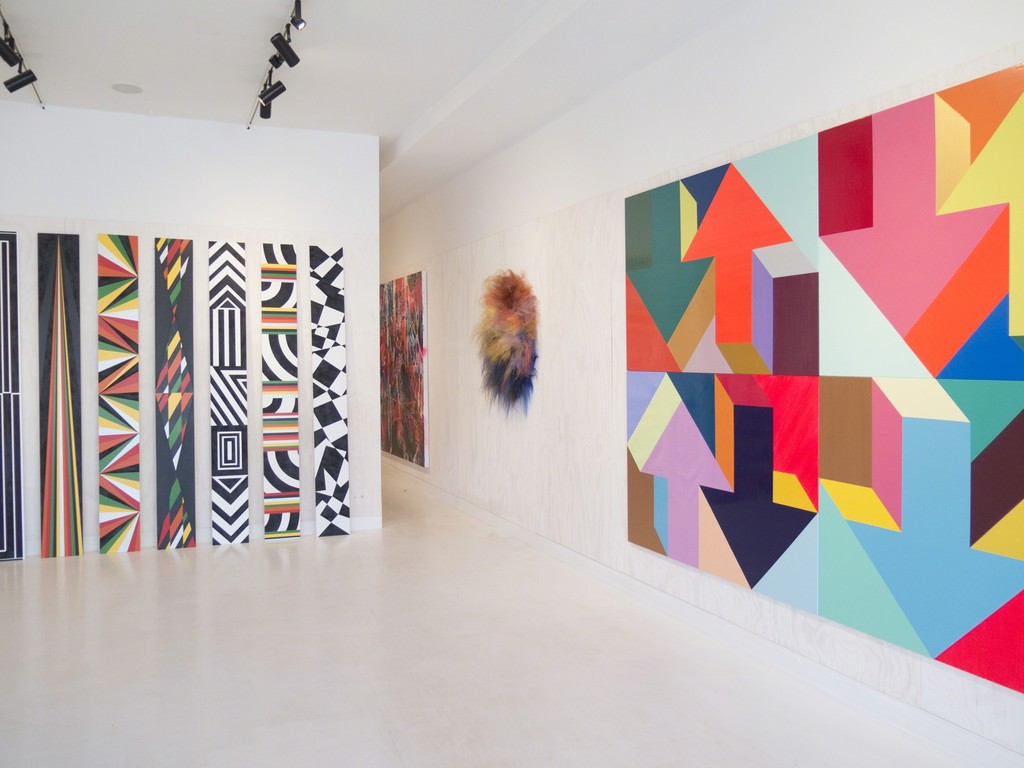 East Hampton, NY: Eric Firestone Gallery is pleased to present All Killer No Filler, a group exhibition featuring eleven established and emerging artists. The exhibition focuses on artworks with equally considered surfaces and concepts. A variety of artistic practices, media, and narratives are presented, all of which engage the audience in a conversation beyond formal qualities to much broader agendas, whether they be political, social, art historical or philosophical. The juxtaposition of visual with conceptual methods illuminates substance underscored in contemporary art. In turn, the artworks showcased in All Killer No Filler hint at the zeitgeist of our time.

In All Killer No Filler, graphic motifs and the continuance of Op art act as a mirage, presenting one pattern and revealing another. In her Go Bust series, Sylvie Fleury creates compositions punctuated by colorful spots. Her visual affect is both psychedelic and coolly calculated, taking a riotous turn when the viewer becomes aware that the form emerging from a pristine masculine space, is a feminine one. Likewise, Rico Gatson's series Panel Paintings fragment color, line and shape, rendering a visual rhythm in high contrast. Societal unrest resonates from his composition's use of formal tension, and references to identity politics.

Other artists play with narrative to lead the viewer out from under the surface. In Derrick Adams' series of mixed-media, collaged television sets on paper, he constructs mirrored images of reality, highlighting current events, to note and exaggerate stereotypes. His disjointed portraits are constructed out of fractured imagery derived from abrasive lines and chaotic colors. Portrayals intersect at a nexus of popular culture, mass media, fashion, the black experience, and the art of the past. Much like Adams, Rosson Crow ruptures the boundary between the intended and the re-appropriated use value of her narratives by treating the surface of the painting like an aerial view of a pile of political memorabilia sprawling toward its edges in, It's a Scream! (Political Funhouse). Blurring time and place, she integrates neon-hued haziness and ambiguity with our familiarity for classically American symbols, typography, and politics.

Moreover, the artists look to humanize inescapable phenomena prevalent in today's society. All Killer No Filler includes artwork that transcends material and rises into a singular, structural object. Nari Ward's Weather Maid, comprised of a metal door from a housing project and felt weather seal, becomes an emotive character who requests, "PLEASE MAKE ROOM." Through sculpture, Ward depicts the struggles of poverty, racism, and consumer culture. In contrast, Shoplifter / Hrafnhildur Arnardóttir's intention is to transform mass-produced commodities into unique objects referencing nature and the lightness of humanity. She coifs synthetic hair, mesh fabric, and wood, into robust smiles and comets. Her sculptures become reflections of our desire for individuality-and celebrates it.