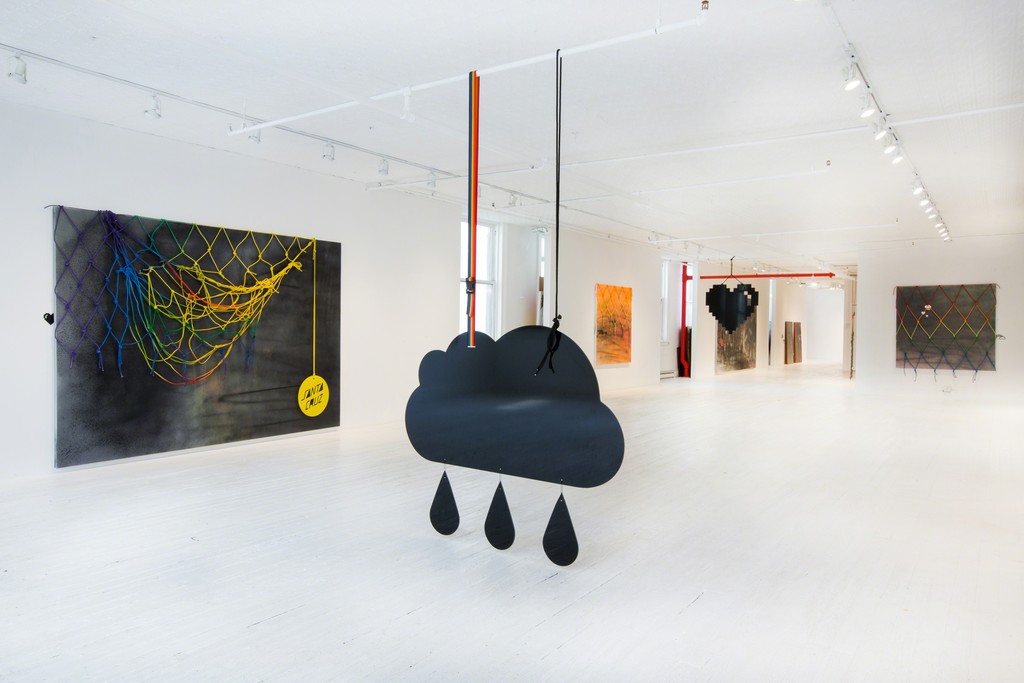 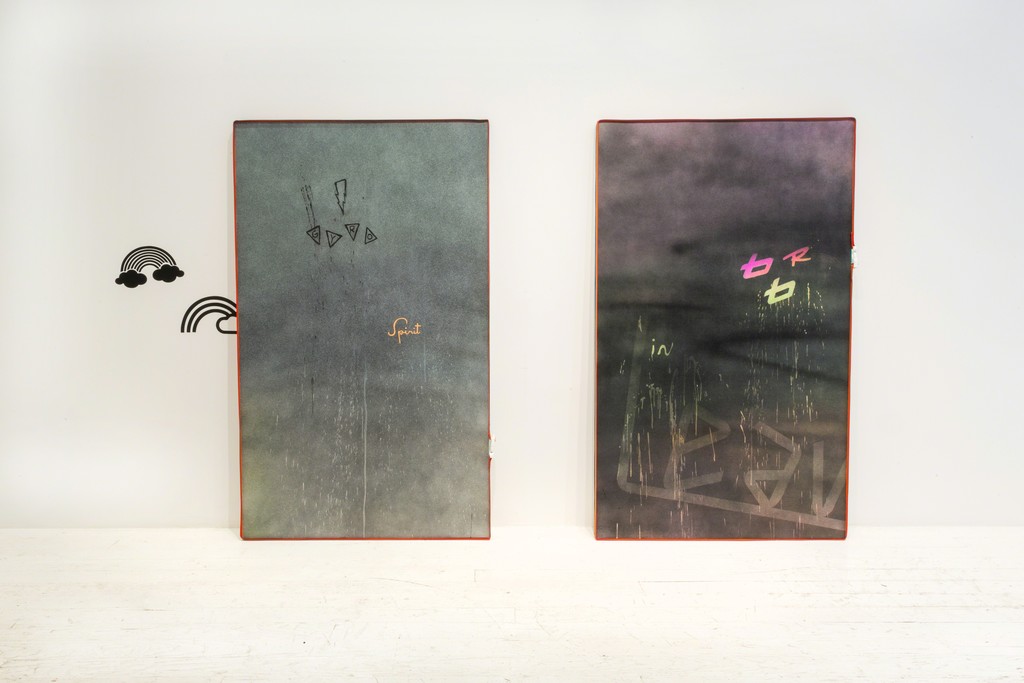 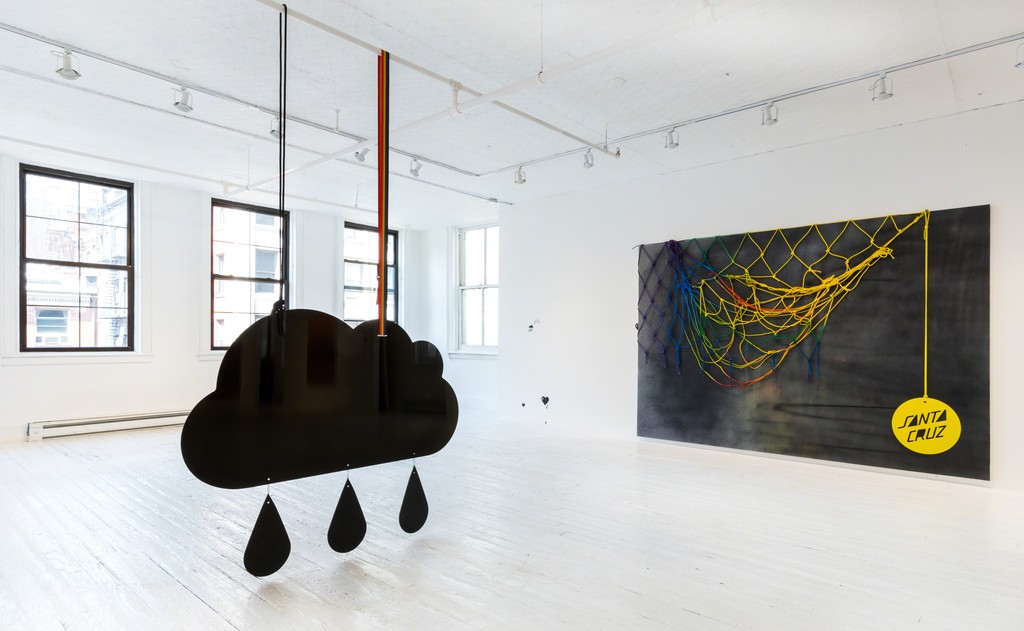 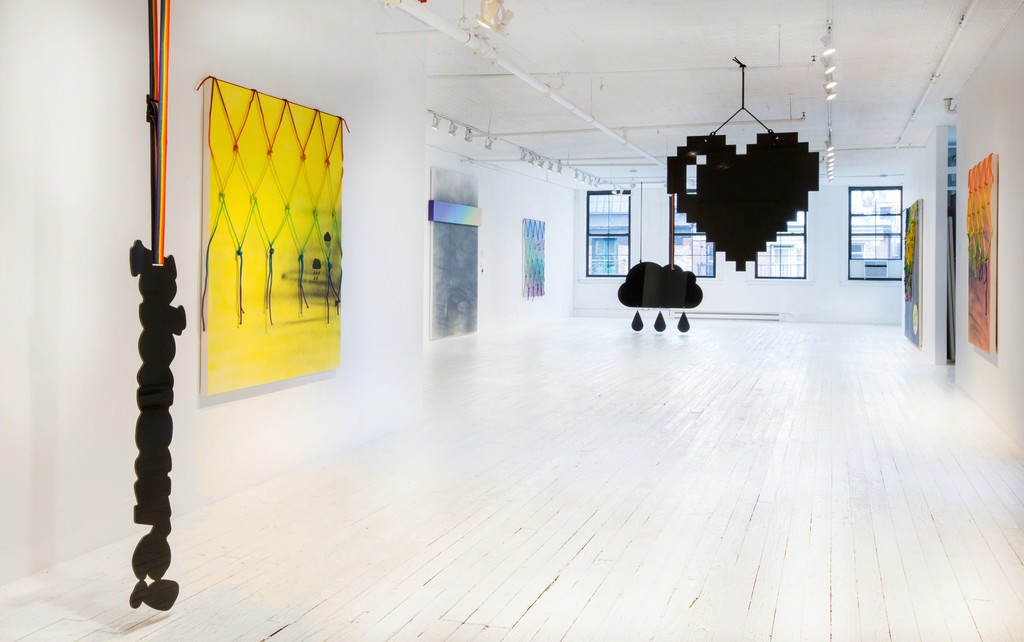 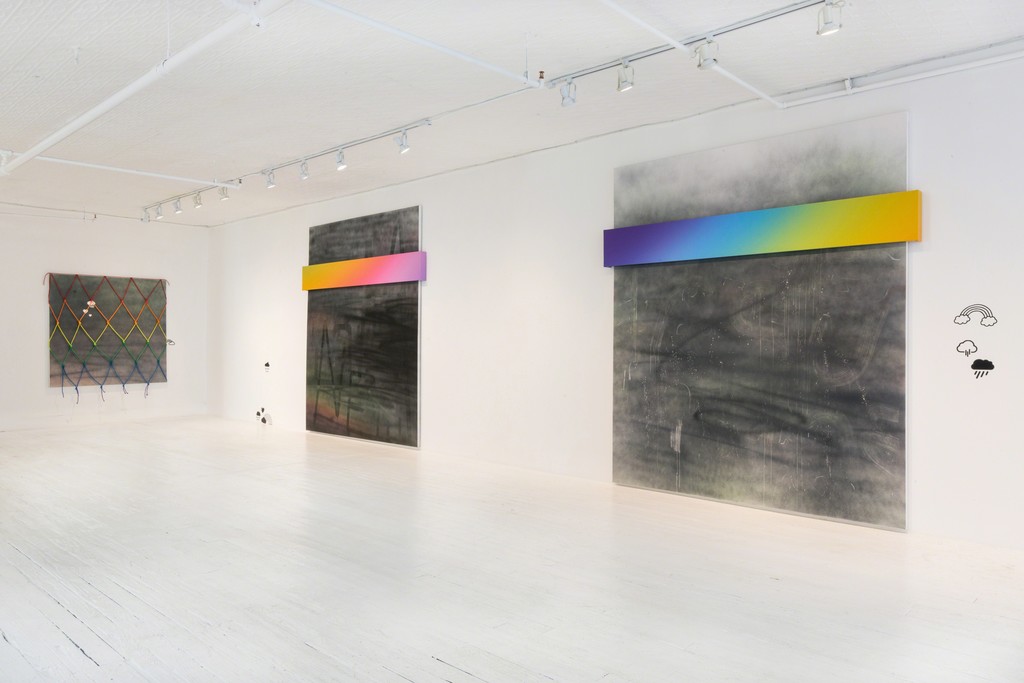 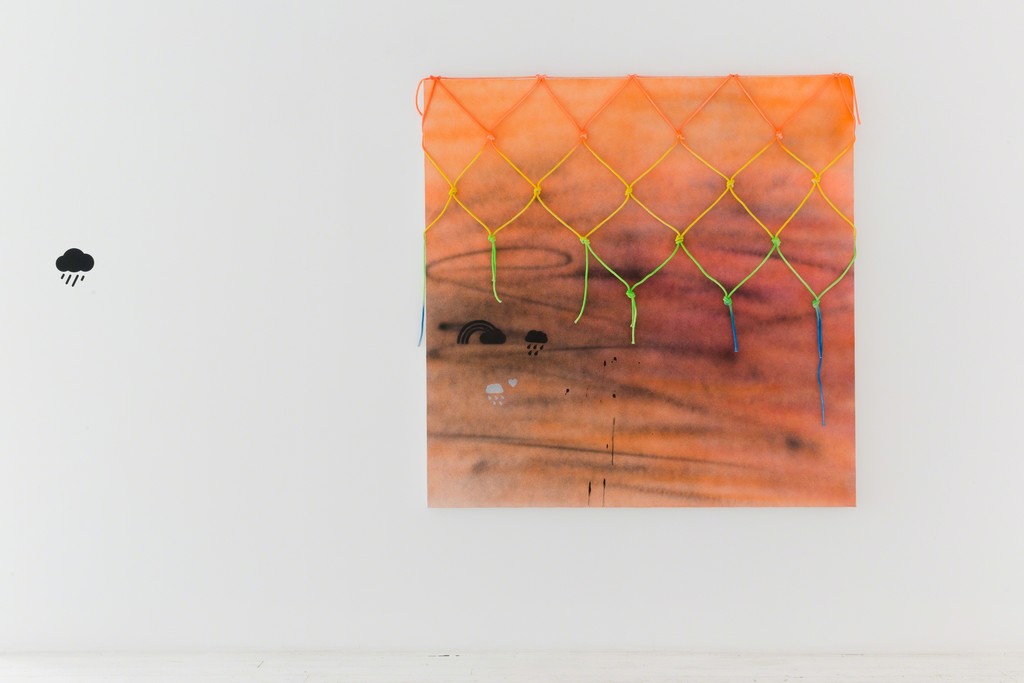 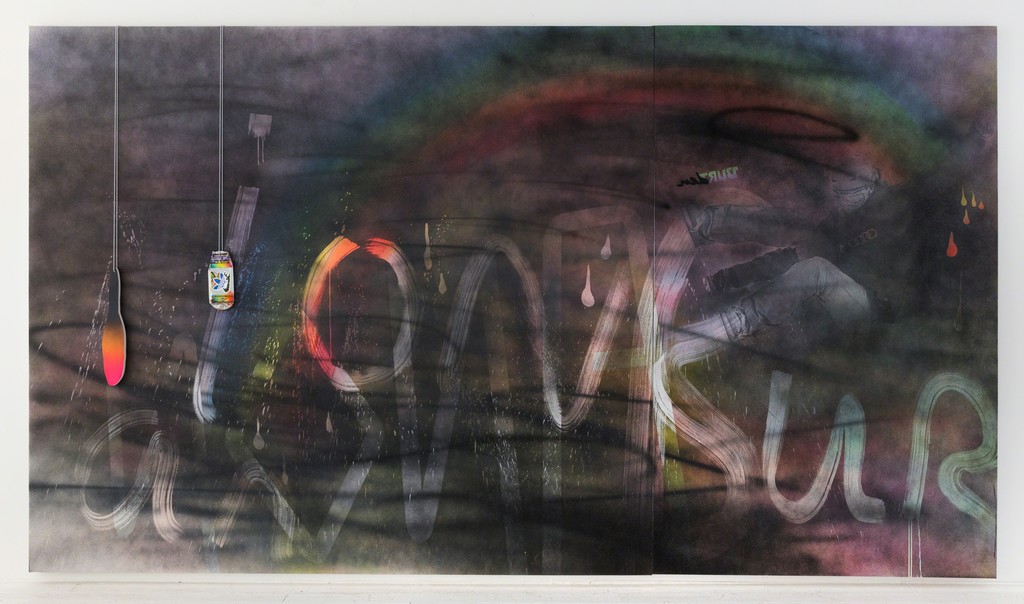 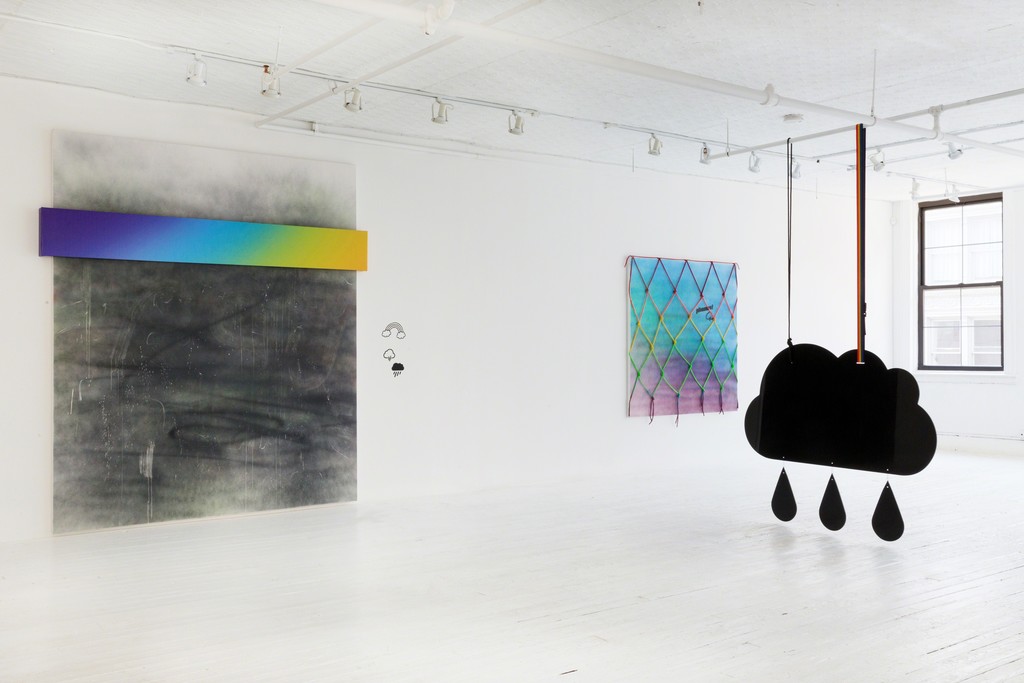 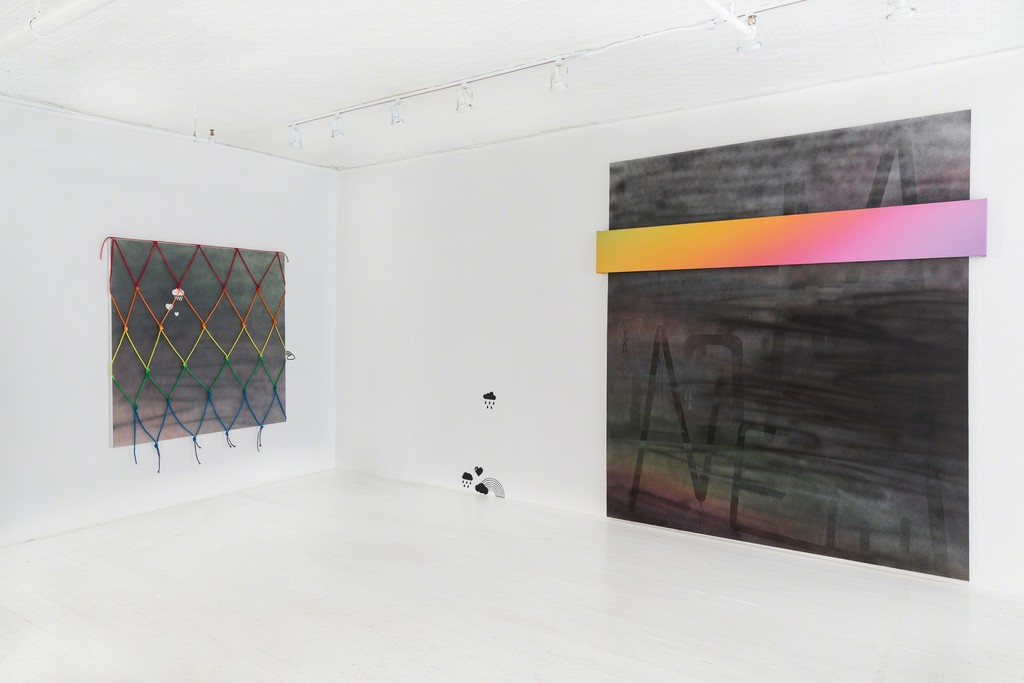 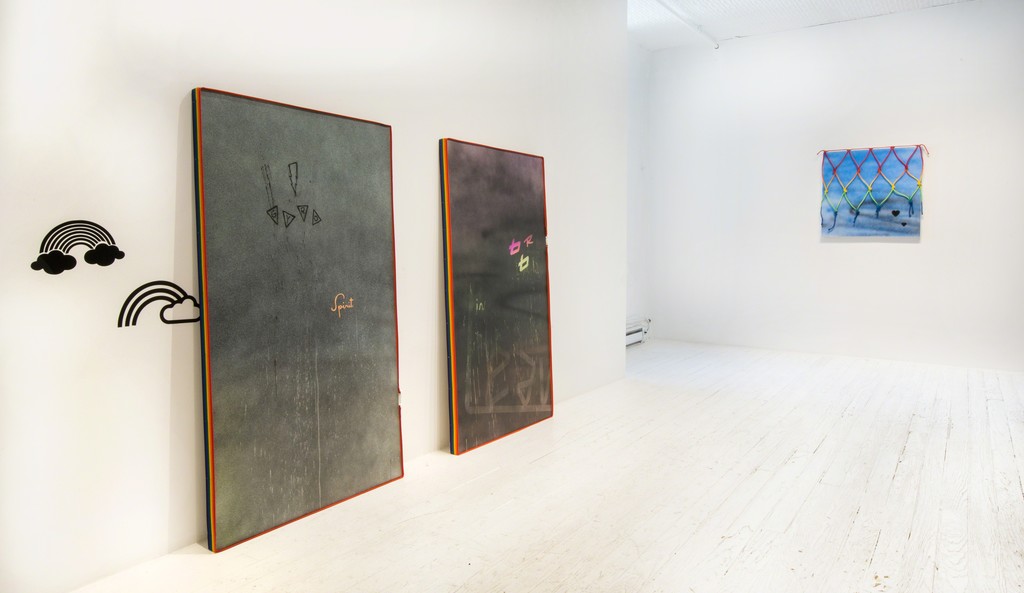 NEW YORK, NY: Eric Firestone Loft is pleased to present Santa Cruz, a solo exhibition of painting and sculpture by Wendy White. Referencing 1980s surf and skate culture, the exhibition explores a desire borne out of the artist’s childhood longing for the sun-splashed lifestyle that the iconic skateboard brand, Santa Cruz, represents.
In her first solo exhibition in New York since 2012, White introduces a new series of atmospheric paintings and hanging sculptures inspired by this California fantasy. As is common in her work, White explores the boundaries between painting, sculpture, and installation, by employing nostalgic symbols in a way that lures the viewer into a pictorial haze to examine an unfolding story.
Just as the skaters and surfers of the 1980s had their specific vocabulary, White presents a lexicon of new iconography repeated throughout the exhibition. Her graphic stenciled rain clouds, hearts, and rainbows take on new meaning, acting as stickers that unify adolescent skateboard fantasies with a Lisa Frank-like pseudo- reality.
 Teasing a relationship between teen aspirations and adult letdowns, a series of juxtapositions are laid out in these works. Cloudy grays are contrasted with rainbow hues: a colorful gradient emerges from misty layers of charcoal airbrush while polychrome netting veils ethereal picture planes. The imagery can conjure spitting sea spray or overcast skies that at times feel wholly synthetic, reading both as gritty graffiti or computer generated marks. Large, bold-colored canvases feel heroic yet subtle, while the crafted elements give a tactile effect. White also engages with the flip side of this utopia: her rainbows and hearts are countered by the proverbial black cloud and another repeated symbol, “pleasure!” takes on darker undertones when recognized as a cigarette advertisement. We become aware that the rainbows may be emerging from a fog but they also could be shrouded by darkness.
With this exhibition, White will transform the gallery’s 4,000 square foot loft space into an immersive installation. We see her rainbow netting as a play on the grid; her atmospheric spray reads as monochrome from a distance, but is speckled and textured up close. Grosgrain straps both hang sculptures from the ceiling and wrap around canvases, winking at the frame while co-opting its structure, acting to extend rather than define.
Wendy White has exhibited in galleries and museums internationally including Los Angeles County Museum of Art, The Royal Swedish Academy of Fine Arts, Stockholm; Museum of Fine Arts, Gifu, Japan; M Woods, Beijing, China; Bemis Center for Contemporary Arts, Omaha; and Indianapolis Museum of Contemporary Art. In July, White’s work will be on view in Mount Analogue, curated by Neville Wakefield, at Performance Ski in Aspen. This is her first solo show with Eric Firestone Loft.
Eric Firestone Loft is centered on the premise of the art spaces of old New York and offers a unique experience for the viewer to engage with the programming of both contemporary and historic modern exhibitions. Situated in an historic artist live/work building on Great Jones Street, Eric Firestone Loft seeks to engage with the rich past of its surrounding neighborhood, which housed the studios of Walter De Maria and Robert Mapplethorpe, to Jean Michel Basquiat and Keith Haring. The space, still in its relatively raw and unaltered form, evinces a sense of the neighborhood’s heyday in the 1970’s and 80’s. Through a dynamic program schedule, the Loft expands on the gallery’s mission of creating a dialogue between contemporary art practices and the major art movements of the 20th century.