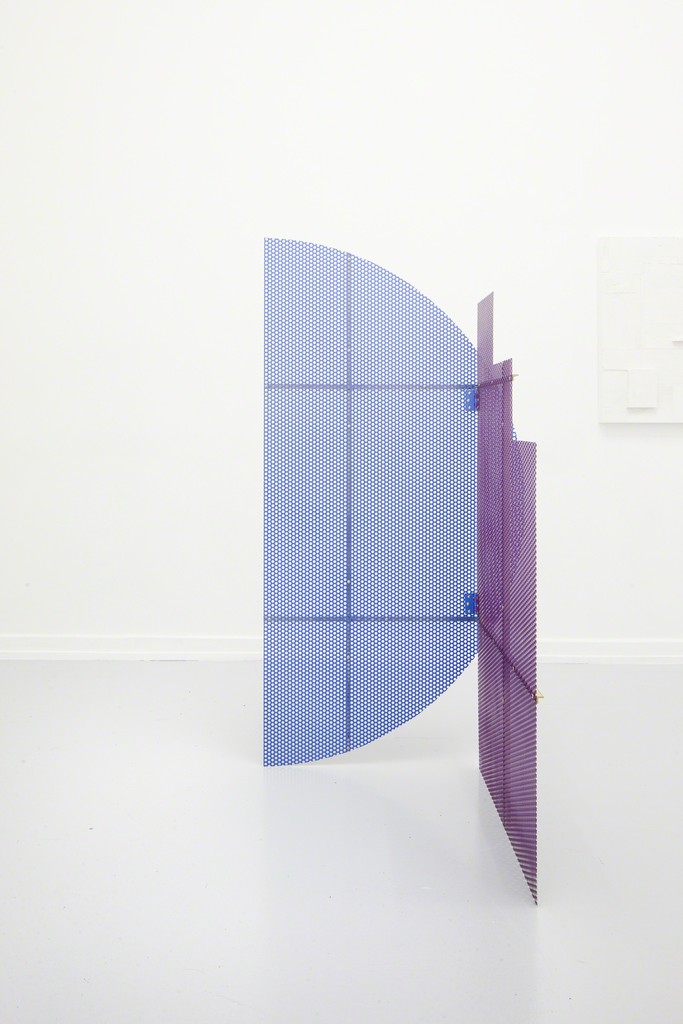 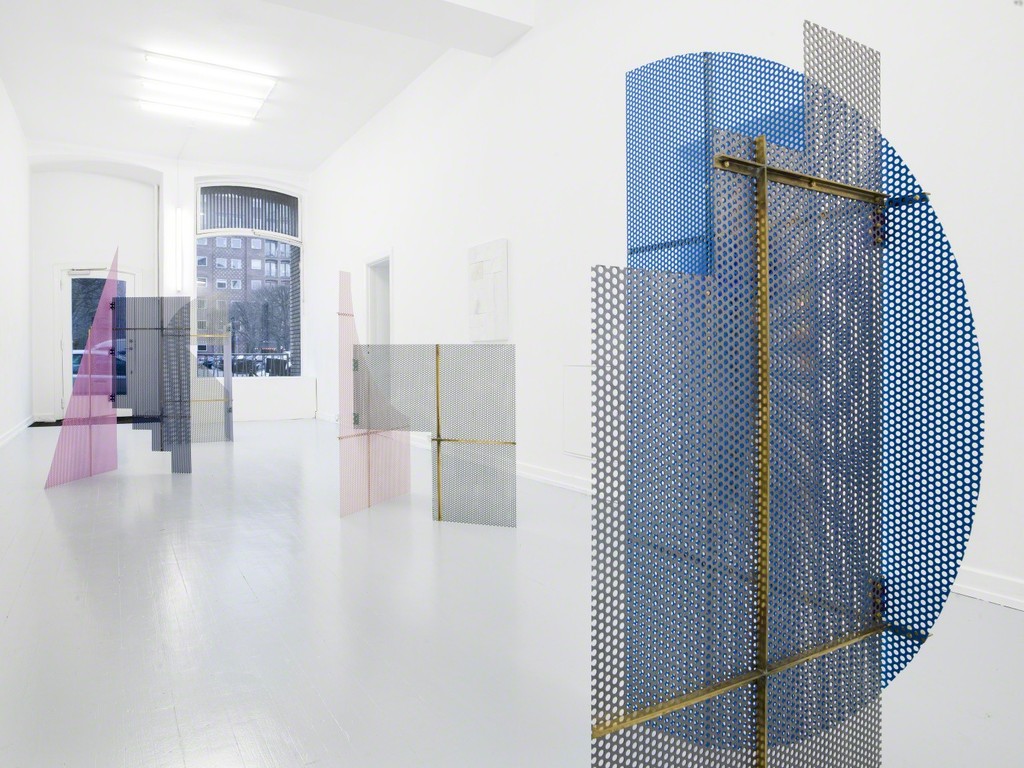 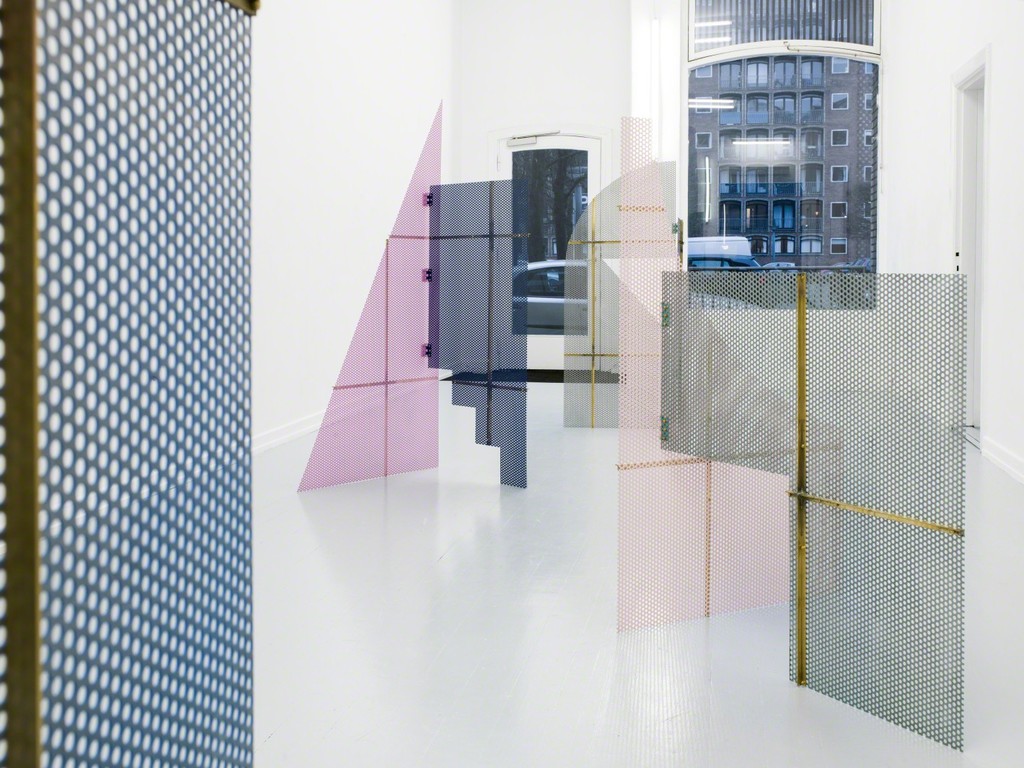 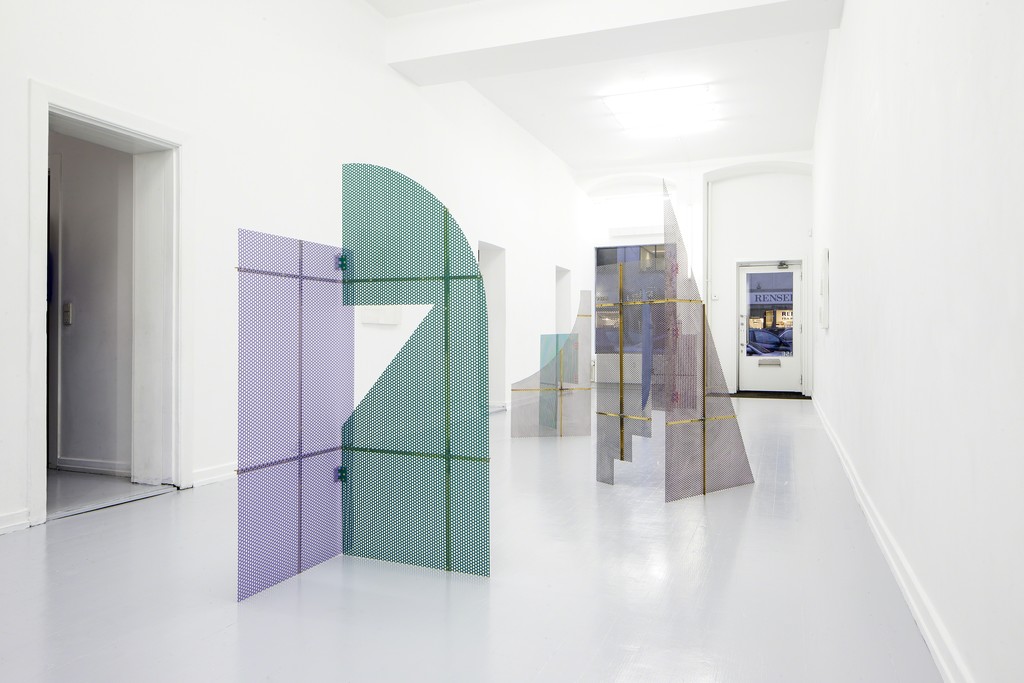 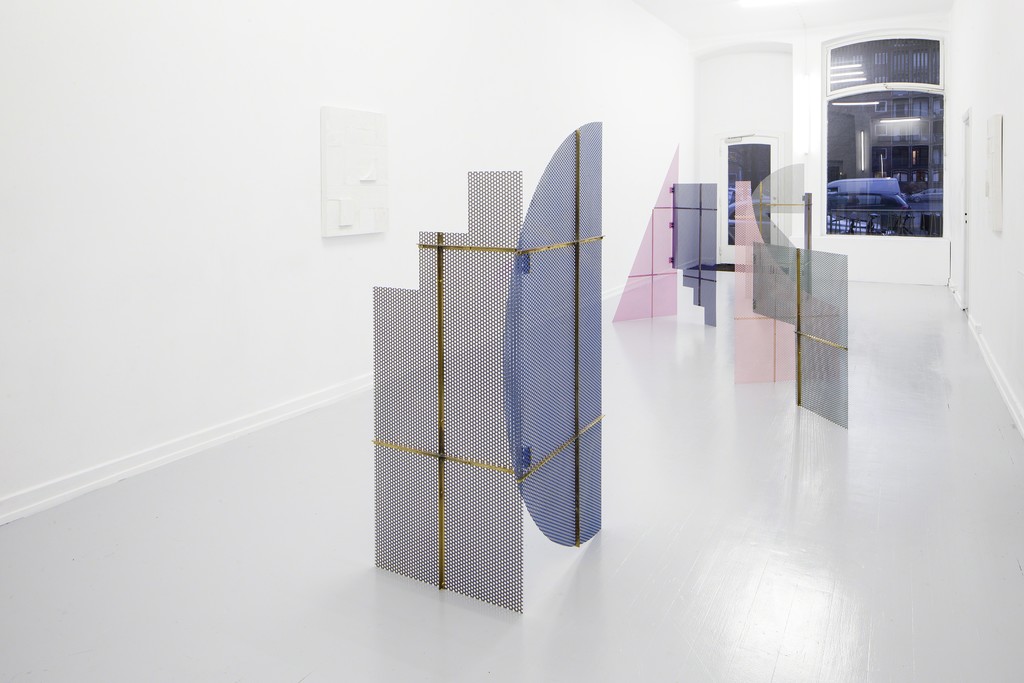 Etage Projects is pleased to present Eva Berendes’ first solo exhibition in Denmark. Besides new examples of her ongoing series of plaster reliefs cast from rough wood moulds the exhibition assembles a series of four screens from 2012 that have not been shown together before.

The works consist of two panels of perforated sheet metal each individually cut out with a jigsaw by the artist and mounted on fine hand-soldered brass structures. The industrial material and „commercial“ palette of purples, turquoise greens and pinks undermine the intricacy of the crafty approach. Connected by hinges the elements support each other in a fragile balance. T Despite the fact that they are coloured only from side while the other one remains raw steel the way the screens are pointed in the gallery space reveals no preference in terms of the direction they face. What is essentially indebted to a painting tradition, the idea of a coloured surface suspended on a frame, does here affiliate in symbiotic harmony. Questions of construction and composition collapse into one and render the pictorial object as one inseperable from design and decoration. By sharing attributes of both the artist brings mutualities, contradictions and contextual shifts to the fore.

The heights of the screens vary between 1,40 to 1,85 m and thus refer to a human scale. Through the use of transparent materials the artist does not only question the rigidity of the geometric abstraction but also promotes intersubjective encounters. In these interpretation is elaborated collectively rather than in the space of individual consumption.

Berendes has been maneuvering in the „expanded“ field of abstract painting for a number of years and has interrogated the medium in a diverse range of formats and materials. Most recently her work has reached out into playground design, urban infrastructure and choreography and made social interaction a focal point. In collaboration with choreographer Sebastian Matthias and a group of dancers she developed a sculptural installation which can be accessed and used by dancers and audience as for example a support structure, a meeting point, an obstacle, or a protective screen. The entire event can be seen as a vivid demonstration of the viewers’ involvement in and contribution to the aesthetic experience in which the work is constituted.

Eva Berendes has studied at the Academy of Fine Arts in Munich, the University of Arts in Berlin and Chelsea College of Art and Design in London. She has presented her work in numerous solo and group exhibitions at galleries and institutions such as Mumok Wien (2010), Hara Museum Tokyo (2011), S1 Sheffield, Witte de With Rotterdam (2011), Bundeskunsthalle Bonn (2013), Grazer Kunstverein (2013) and CRG Gallery New York (2014). Among others she has received a DAAD scholarship for postgraduates, a Pollock-Krasner Foundation Grant and a working grant of Stiftung Kunstfonds (2014).