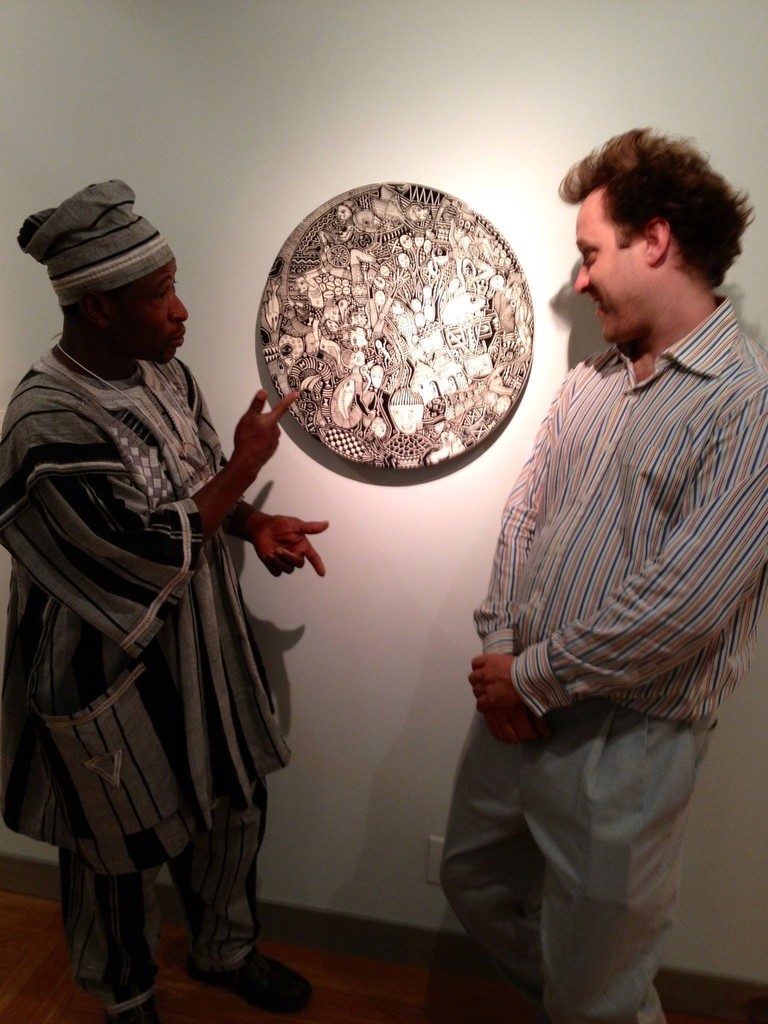 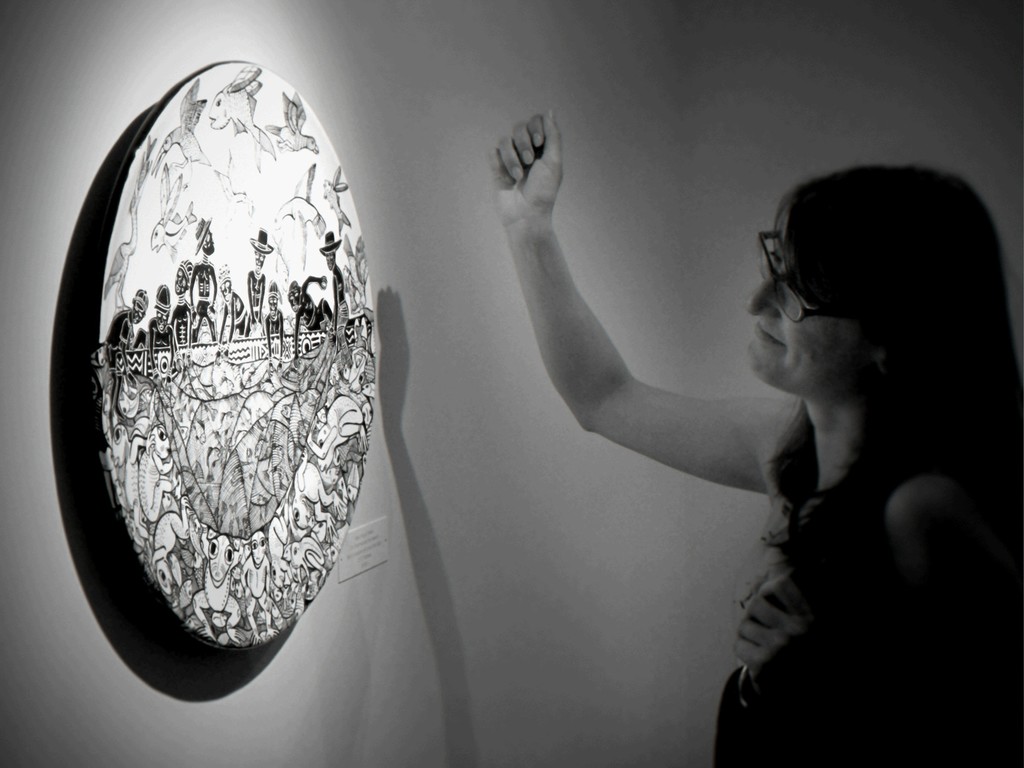 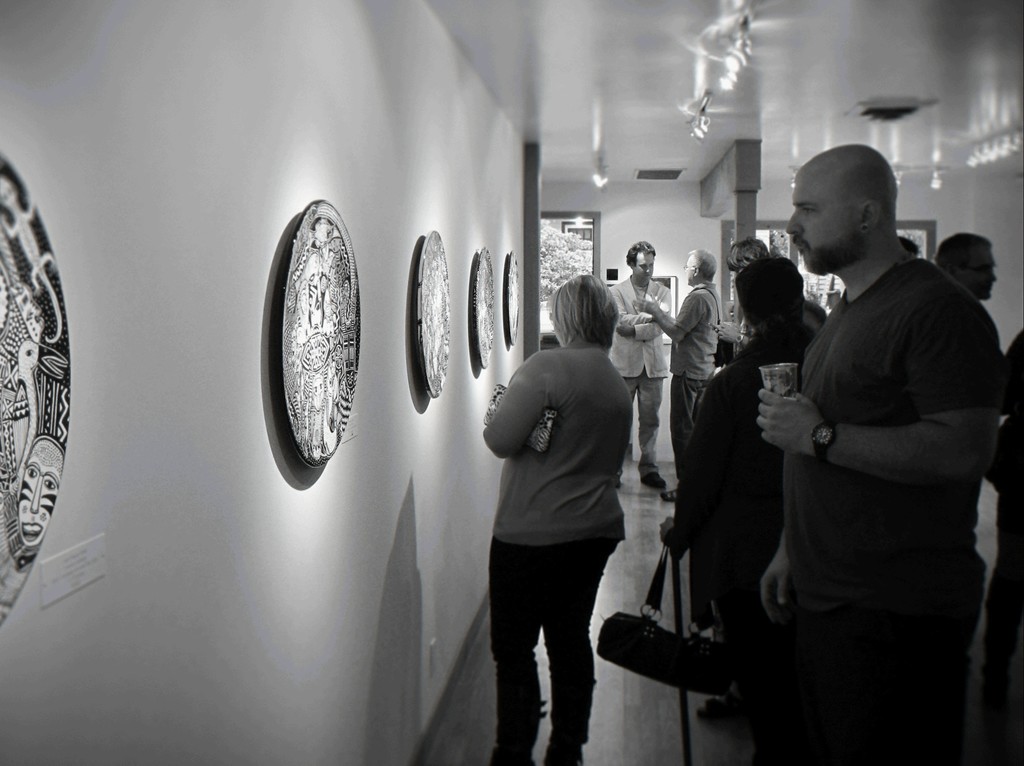 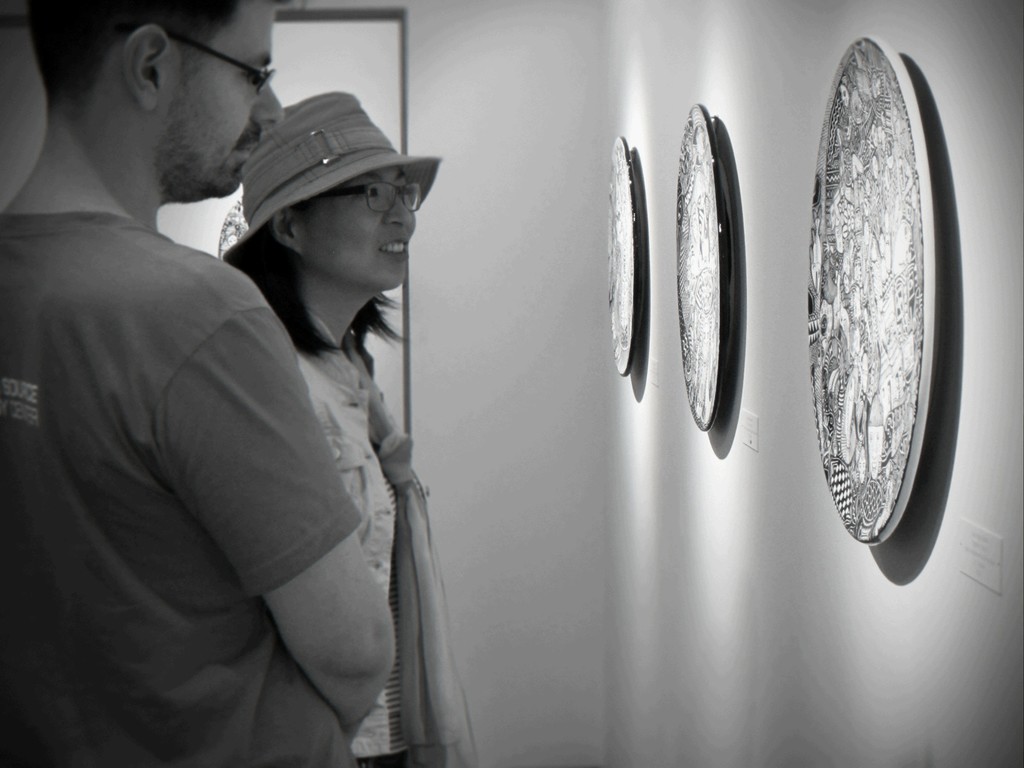 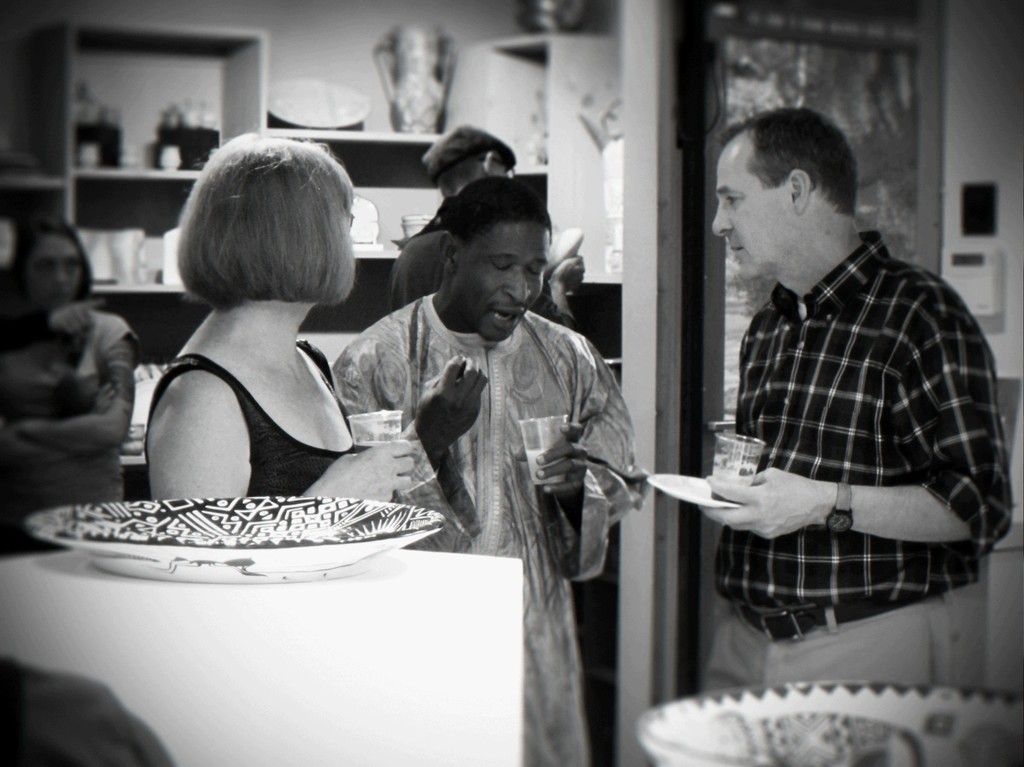 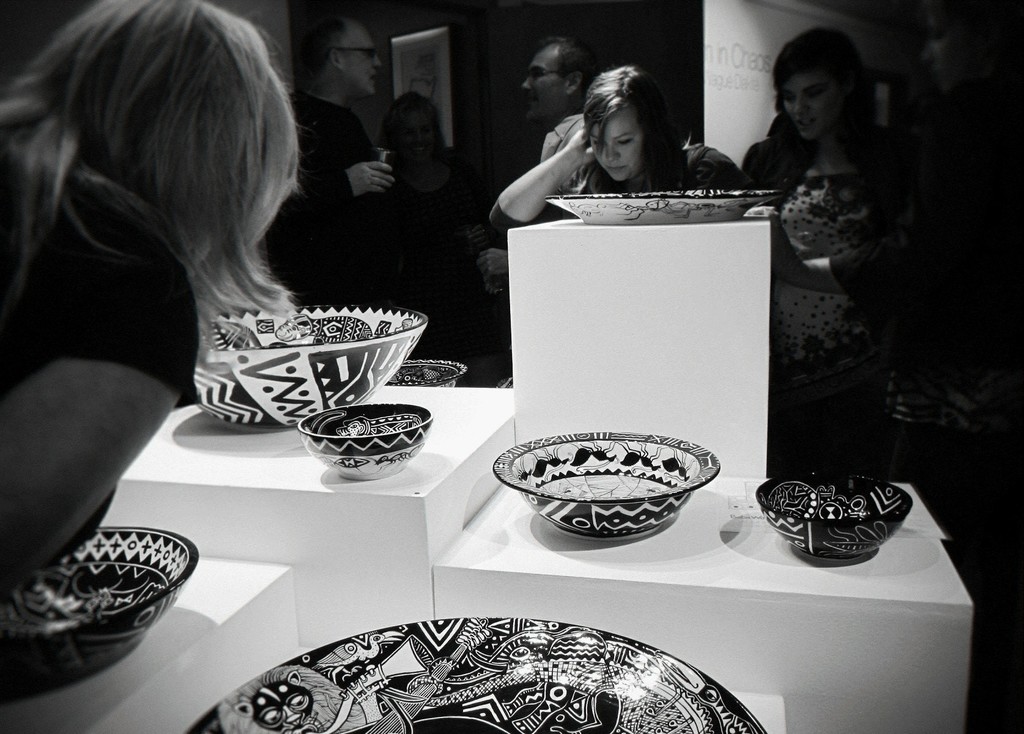 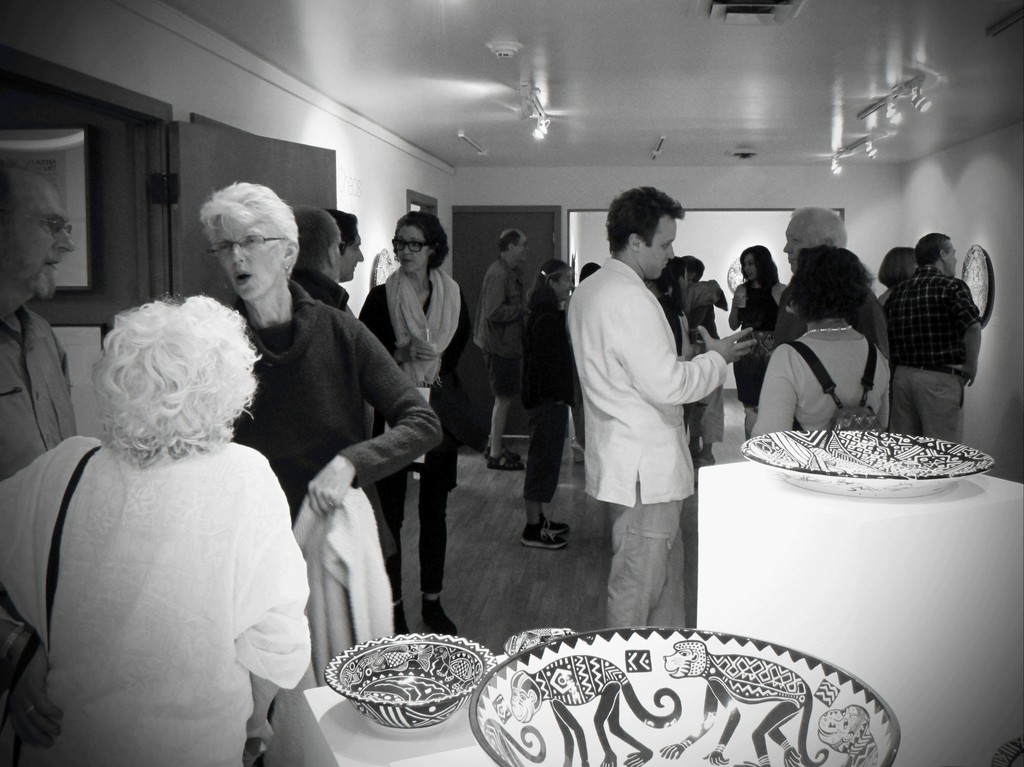 Calm in Chaos: Recent Work by Baba Wague Diakite August 2 – September 29, 2013 The Eutectic Gallery is pleased to present “Calm in Chaos”, an exhibition of recent ceramic sculpture by West African artist Baba Wague Diakite. For this exhibition of new work he calls “Calm in Chaos”, Wague (pronounced “Wah-gay”) has painted his own cosmic universe of dizzying and dazzling designs on a series of large ceramic discs. Adhering to a rigorous palette of black and white, Wague has created an overall design that begins to reveal itself the more one looks, while curator and long time friend Jeffrey Thomas has organized the pieces on the walls “... like planets orbiting the space, densely packed in a riot of pattern and decoration.” Just like looking up at the stars in a nighttime sky, at first the eye finds it hard to locate any design within the “chaos” of these wall pieces. But soon the eye picks out a figure, and an animal shape, and a sense of time and place, a way into the “paintings”. In “Calm in Chaos”, Wague is exploring the calm that soothes the chaos, that there is a natural order to things that makes sense, of what often seems a senseless world of pain and suffering. In this sense, Wague is also addressing the hurt and violence that has haunted his homeland in Mali the past few years. Artists are influenced by any number of stimuli, especially in their younger years. Wague was influenced by the stories he heard growing up, especially those from his grandmother. He spent his early childhood with her in the village of Kassaro where he tended sheep and the peanut fields when he wasn’t roaming the bush to watch and track the animals with his friends. Wague remembers crouching on the dusty red clay soil of Mali and drawing dancing figures and animals with a pointed stick in the dirt. That oxide-rich red clay ground was his sketch book for years. Later he moved to Bamako to be with his mother and to get a formal school education. During this time, Wague continued to develop his distinctive animal imagery among an array of intricate and colorful patterns drawn from the West African fabrics around him. As Wague tells it: “My greatest influences come from traditional stories told my mother, my grandmother and my grandfather. Over the years, I spent many years learning about the animals, trees and the First Men. This is the reason my drawings on my bowls and patters, cups and saucers are about these things. I have thought and dreamed about the First Men for many years. They were good thinkers, hard workers, and I have been very curious about how their life was in those early earth days. Looking at the First Men, I put myself among them when I work. I think and dream about the ‘interval’ between their time and our time; how they used to be on earth and how we are on earth today. My animals, my myths and my images come from the interval that exists between them and us. We forget the old ways. So in this way I teach the children.” Wague has tapped into his own heritage growing up in a family that drew and told stories, and within a cultural tradition that valued color and line. He has adopted the figures and animals of his childhood legends into celebratory ceramic objects that convey the personalities of the traditional stories in our own contemporary times. “Calm in Chaos” is alive with fresh perspectives, rhythmic patterns, fantastic shapes, real animals and dancing skeletons which depict the First People. Victoria Rovine, curator University of Iowa Museum of Art, wrote in African Arts Magazine in the Summer 2001 issue that “by moving beyond the divisions that often segregate both people and art forms, Wague Diakite eloquently demonstrates the interconnectedness that animates the universe.” Wagué had his first solo exhibition in 1988 at the Jamison Thomas Gallery in Portland, Oregon and since has shown in group and solo shows throughout the United States. His work has received critical acclaim in international magazines such as American Ceramics, Ceramics Monthly, African Arts, and AFRIQUE/Etats Unis. He taught in the Oregon public school systems through the Art-in-Education, and the Young Audiences program from 1989-2007. He has traveled throughout the U.S. for author visits and workshops, including the Museum of African Art at University of Iowa, the Holter Museum of Art in Montana, the Los Angeles County Museum of Art, and the Smithsonian Museum of African Art. He has been commissioned to create poster designs for a number of city-wide art festivals, and was honored to be chosen to create the artworks for recipients of the 1990 Governor’s Arts Awards in Oregon. In 2001, Wagué created an 84 foot long mural and other artworks for Disney’s Animal Kingdom Lodge in Orlando, Florida. Scholastic, Inc. published Wagué’s first children’s book “The Hunterman and the Crocodile” in 1997. It received a Coretta Scott King Honor Book Award in 1998. His 2nd children’s book entitled “The Hatseller and the Monkeys” was published by Scholastic in 1999. He illustrated a 3rd children’s book entitled “The Pot of Wisdom,” authored by Adwoe Badoe in 2001. Jeffrey Thomas, director of the Eutectic Gallery, has followed and collected Wague’s work over many years and watched his development as an artist. “It has been remarkable to watch these platters come in…the painting is so subtle and monochromatic as under-glazing, but then, once fired, the pieces become these vibrant patterns of dancing lines and delicate shapes, both abstract and representational as engaging works of art.” Wague is a natural born storyteller. He is animated and engaged when he shares these stories. This is the story of how he got his name: “My name, Wague, came from my mother. Wague means “The Man of Trust” in my language, Bambara. My mother gave me this name because it was her father’s name.