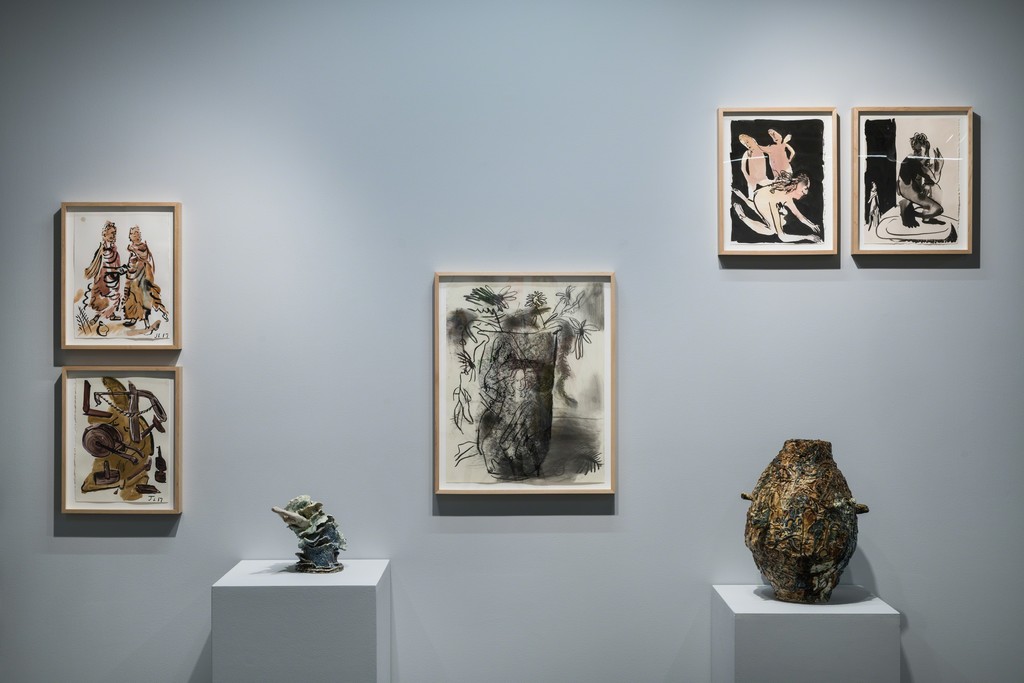 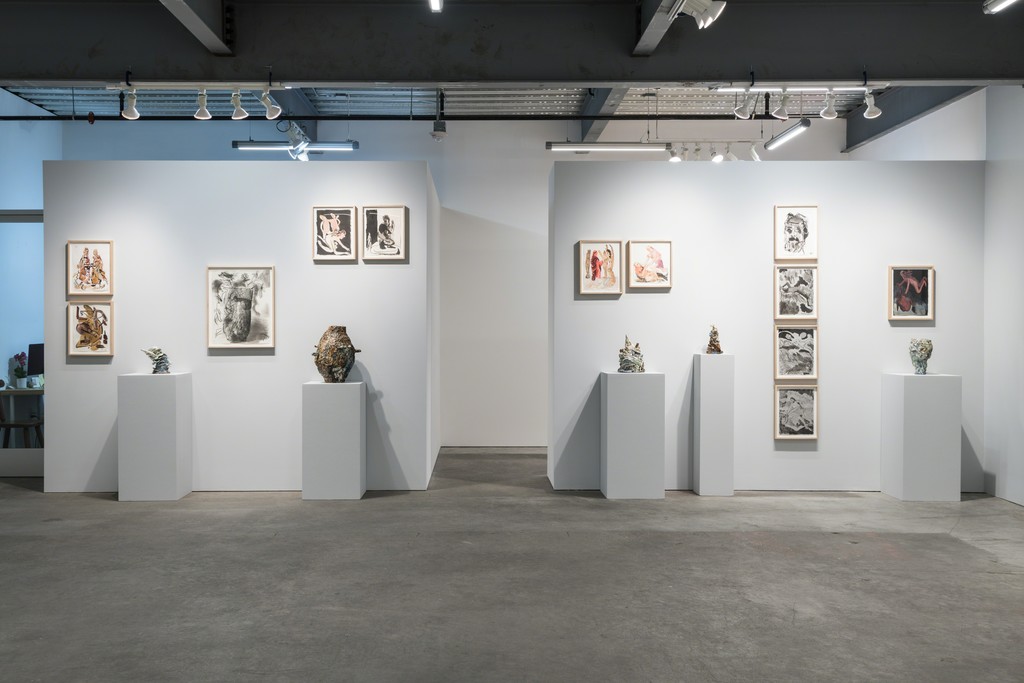 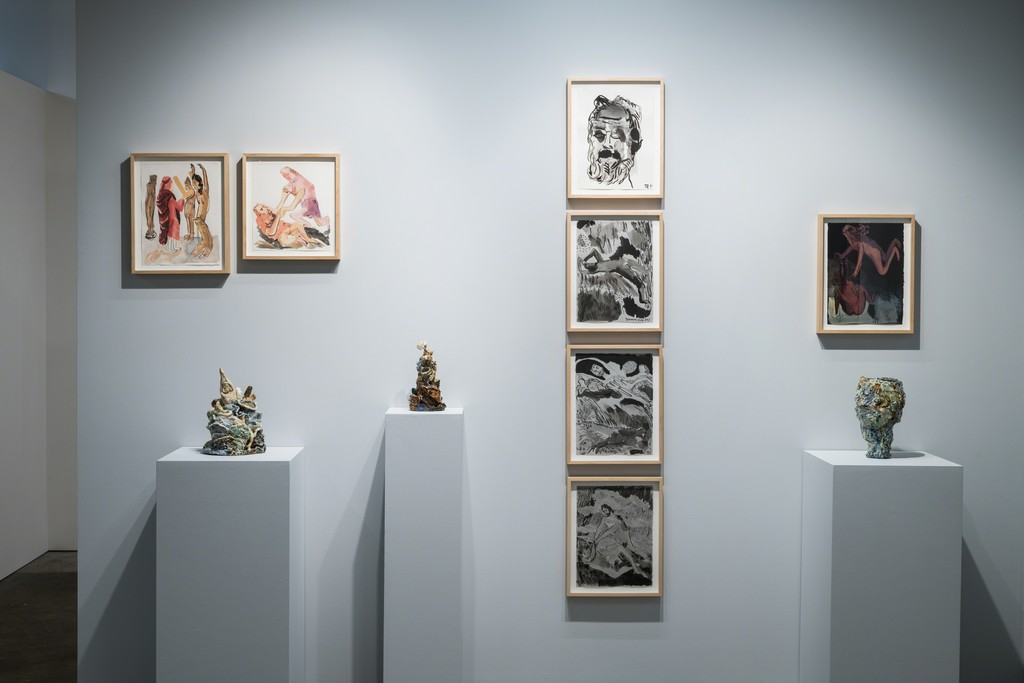 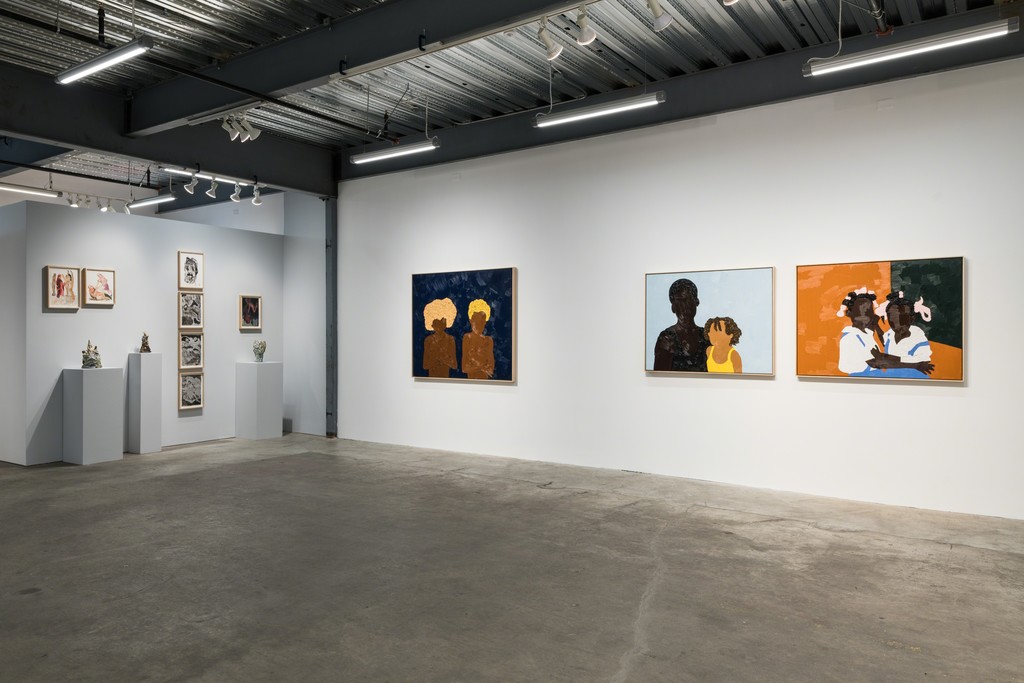 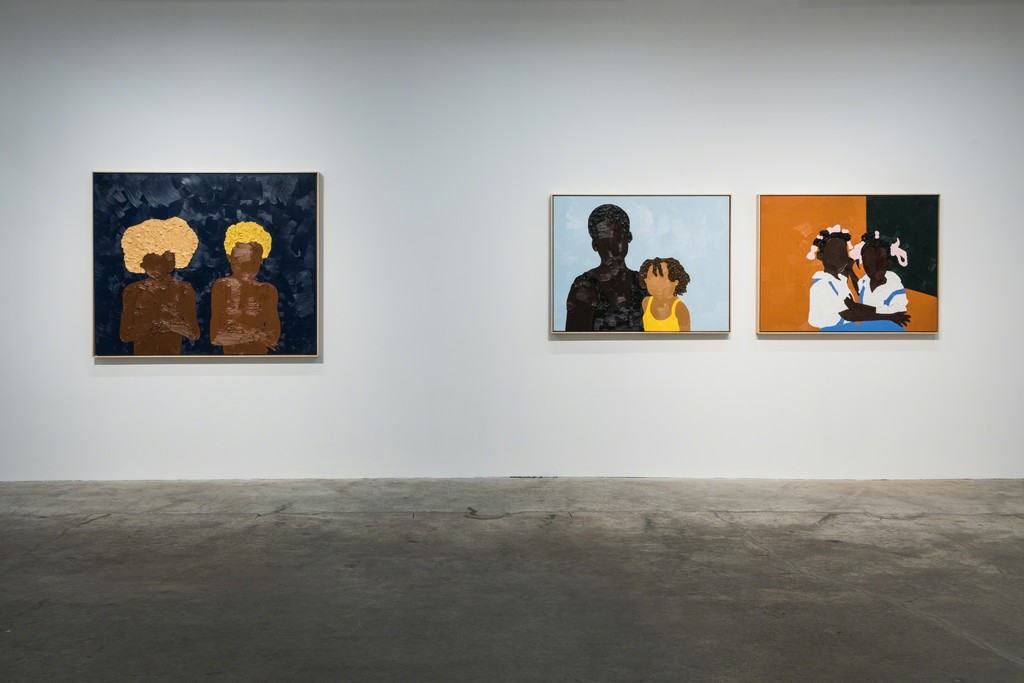 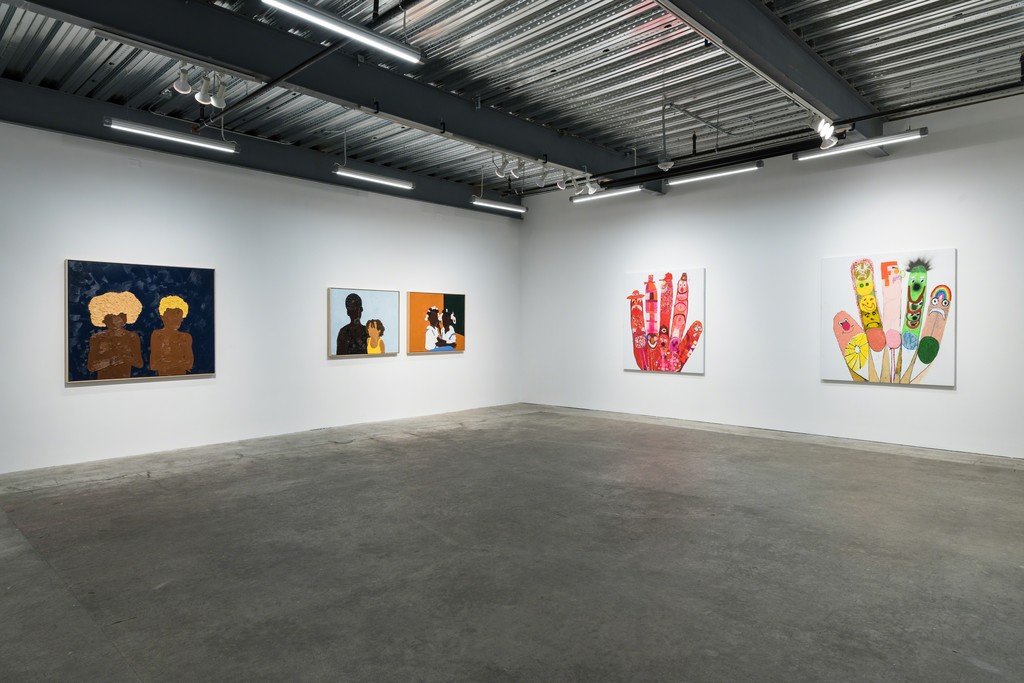 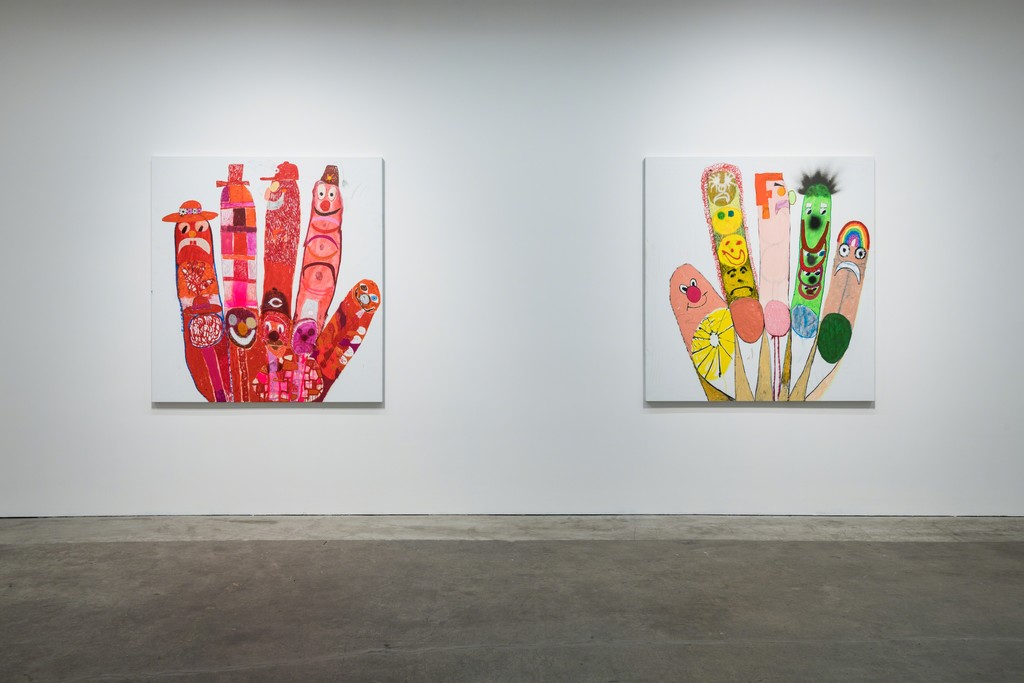 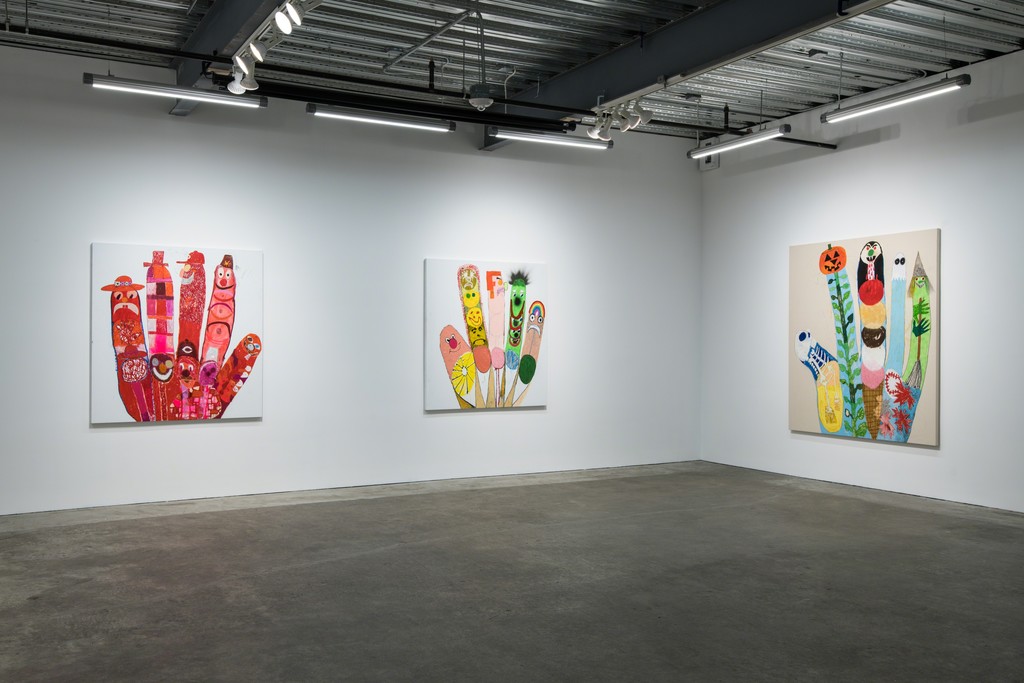 Jasmine Little presents new ceramics and works on paper, which the artist presents together to draw attention to their relationships. Little often looks to previous instances of her work for direction, using works on paper to inspire ceramic sculptures, and vice versa. There is an oscillation between figuration and abstraction, which is perhaps most evident in her ceramic works, where certain clearly figurative elements dissolve into textural explorations. Little is interested in a kind of material minimalism—while her work is colorful and often quite detailed, she favors an economical use of media, enjoying “the confinement of the parameters.”

Shaina McCoy presents a series of new oil paintings in which she depicts interactions between family members, drawn from her own family photographs as well as from found images. Her application of paint is heavy but delicate, and a signature gesture is to leave the faces of her subjects blank. Removing the most specific identifying marks—facial features—she offers her characters as sites for a viewer to project their own memories and experiences. The human form is simplified and elevated by the omission of features; the value of the body as vehicle and host replaces the abstract relationship of personality and physicality.

Michael Swaney presents a series of new mixed media paintings, in which he uses the outline of the human hand as a structure to host a variety of strange forms and figures. Each finger becomes at least one character and sometimes many, often with its own distinct style and materials. There is some reference to the Thanksgiving tradition of children creating turkeys from the outline of their hands, but Swaney’s treatment of the structure brings it closer to its limits while maintaining the form’s playfulness.

Shaina McCoy (b. 1993) lives and works in Minneapolis, Minnesota. McCoy began painting while studying at the Perpich Center for Arts Education in Golden Valley, MN in 2012. She attended Normandale Community College from 2013-2014, and graduated with an Associate of Arts from Minneapolis Community and Technical College in 2018. Her work has been included in group exhibitions at Gildar Gallery (Denver, CO), Art4Shelter (Minneapolis, MN), PLOT (Minneapolis, MN), and City Wide Artists Gallery (Minneapolis, MN).

Michael Swaney (b. 1978, Kimberley, British Columbia) lives and works in Barcelona, Spain. He studied Fine Art at the University of Victoria, and graduated with a degree in Illustration and Design from Vancouver’s Capilano University in 2000. Swaney works in a variety of media, including painting, collage, sculpture, ceramics, video, and installation. He has exhibited internationally since 2004, with recent exhibitions at No Place (Columbus, OH), GNYP Gallery (Berlin), The Dot Project (London), and Charlotte Fogh Gallery (Aarhus, Denmark). He produces books and printed multiples, independently and in collaboration with other artists, and he is also featured in a number of books and catalogues produced by galleries and museums. He has participated in the CCA Aandratx Residency (Mallorca), the Noestudio Residency (Madrid), and the Fountainhead Residency (Miami).