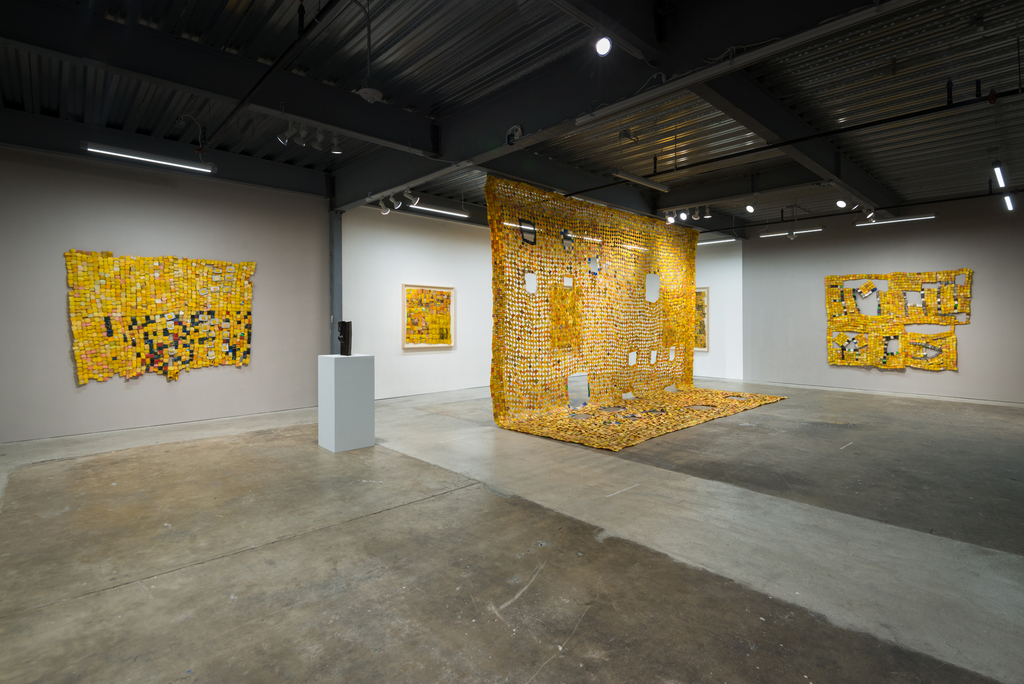 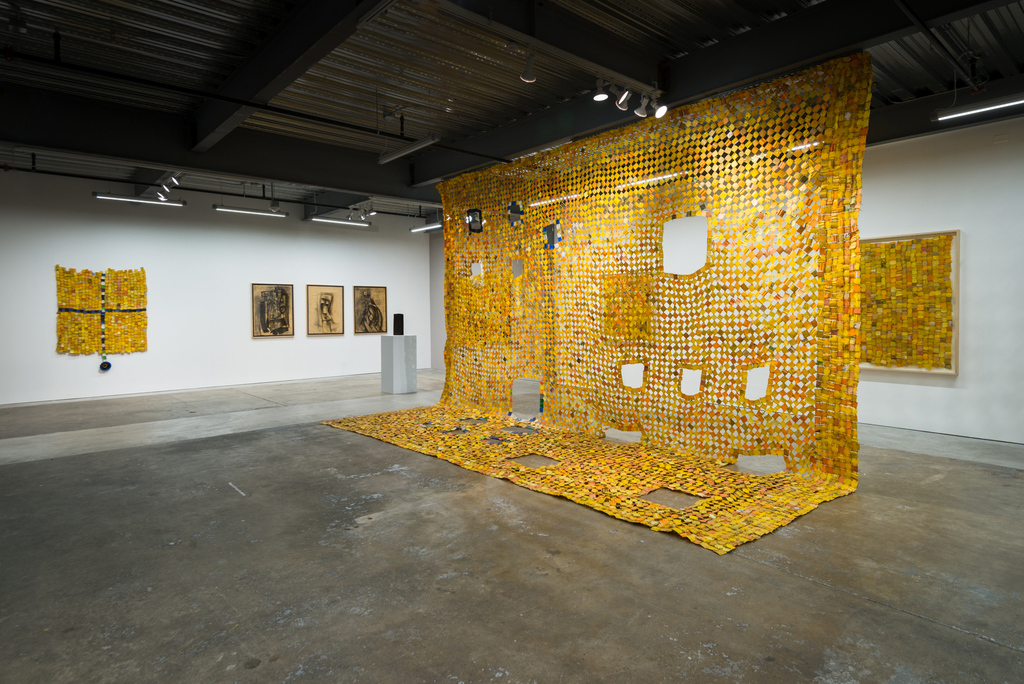 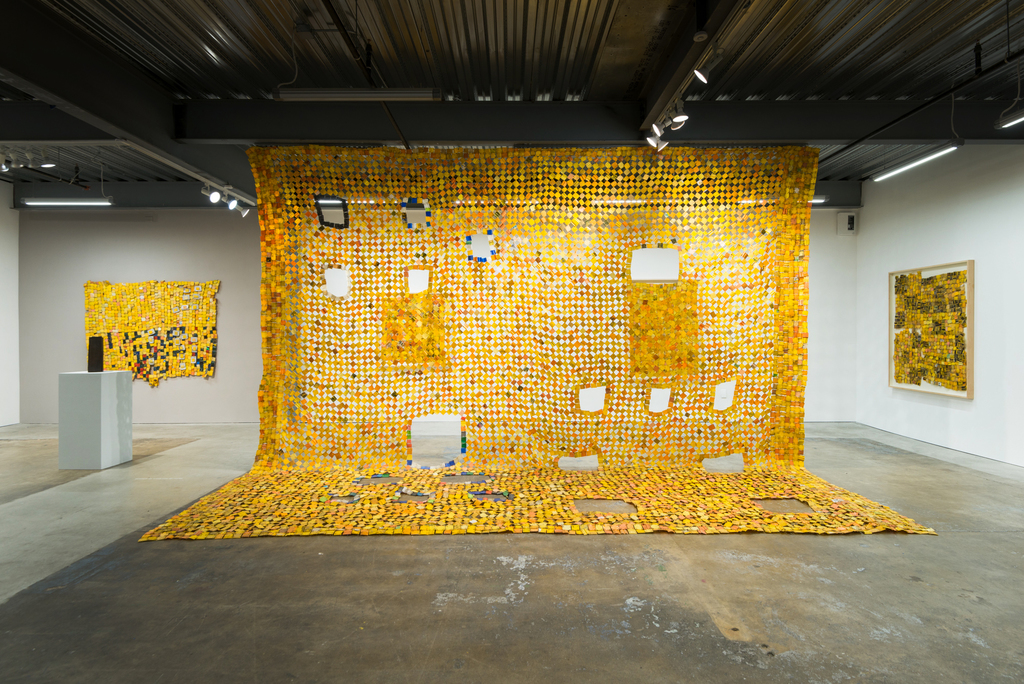 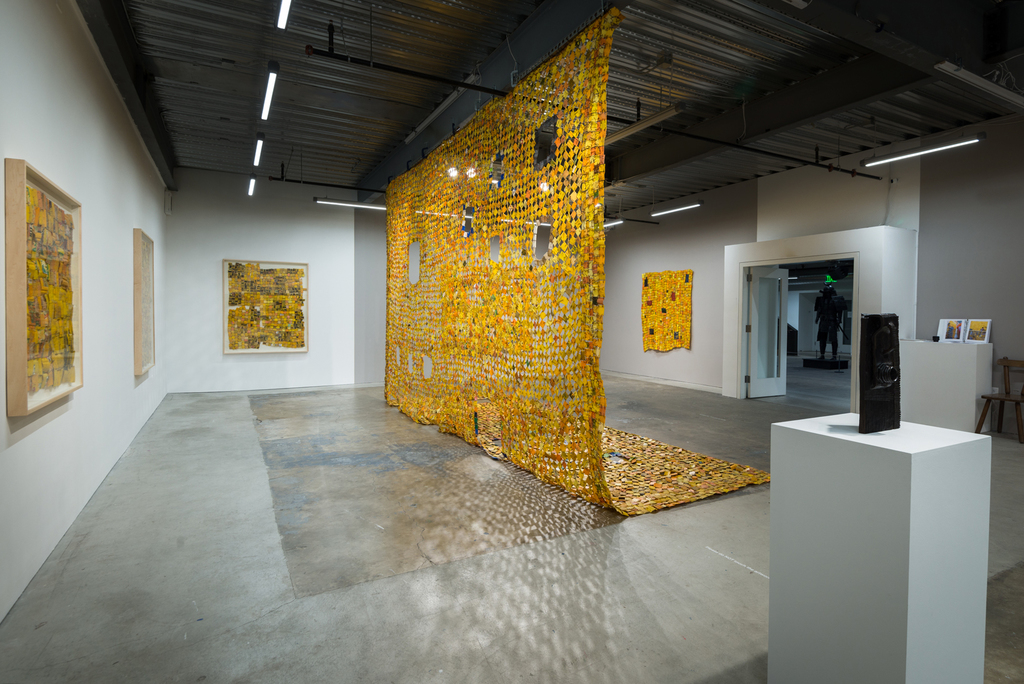 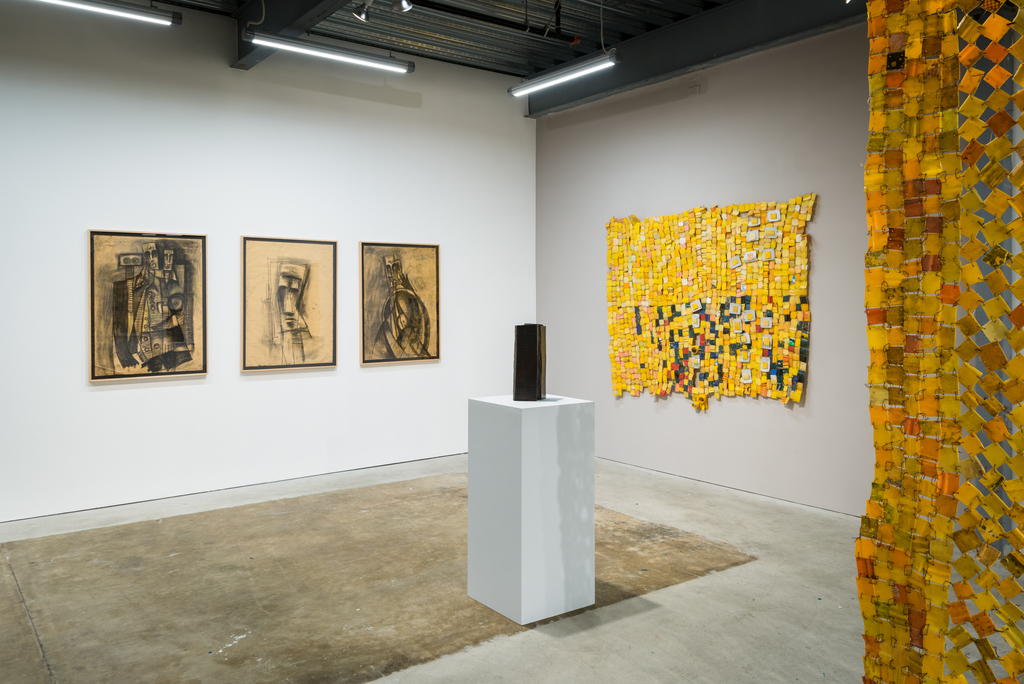 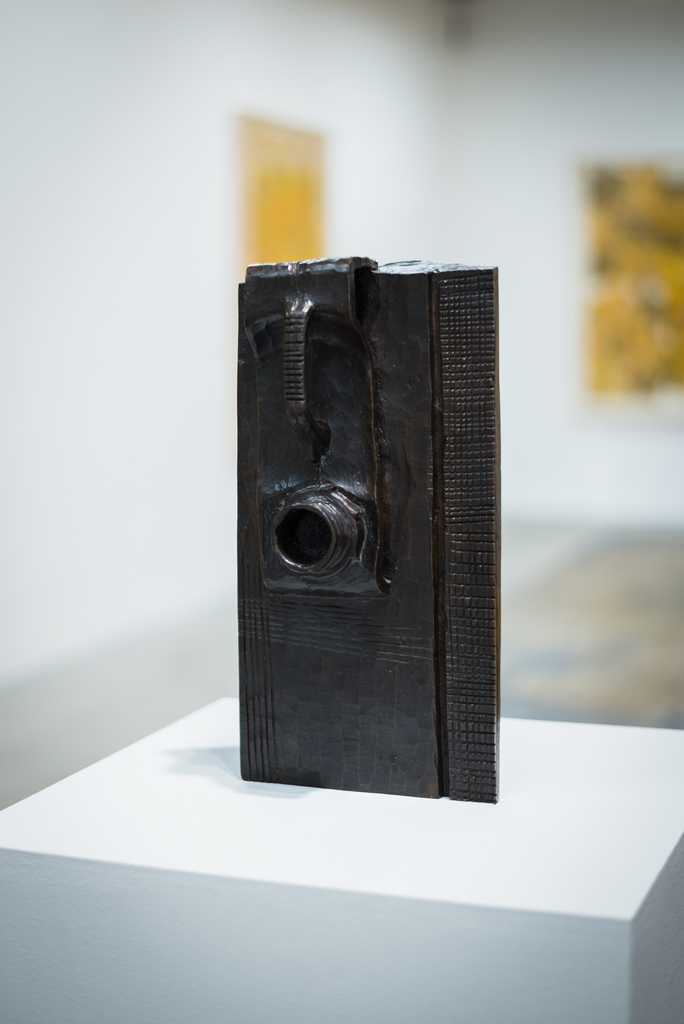 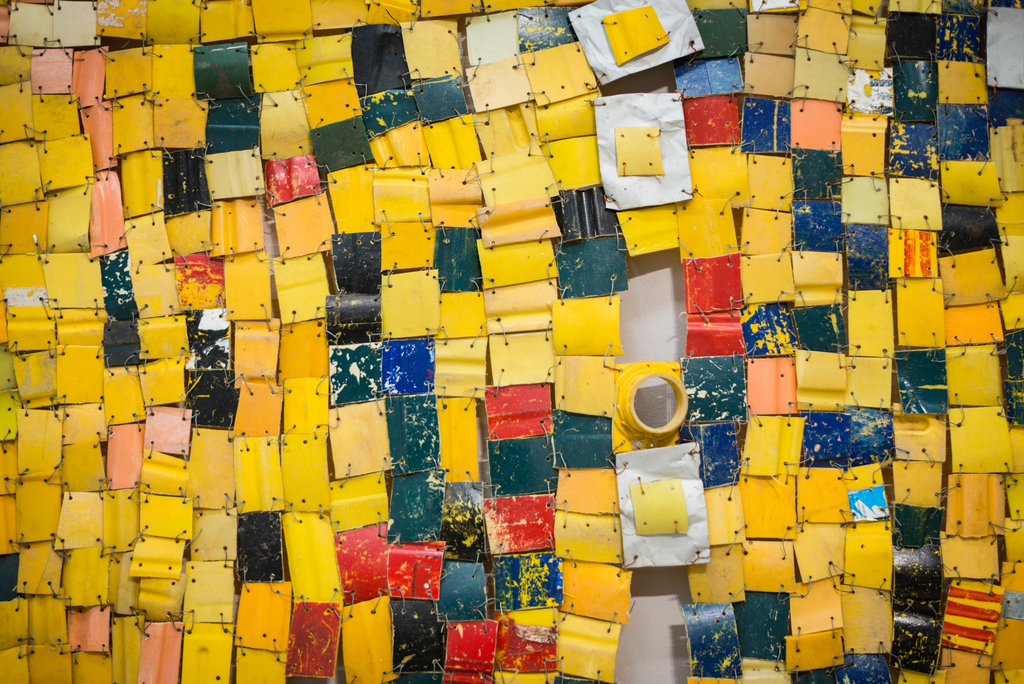 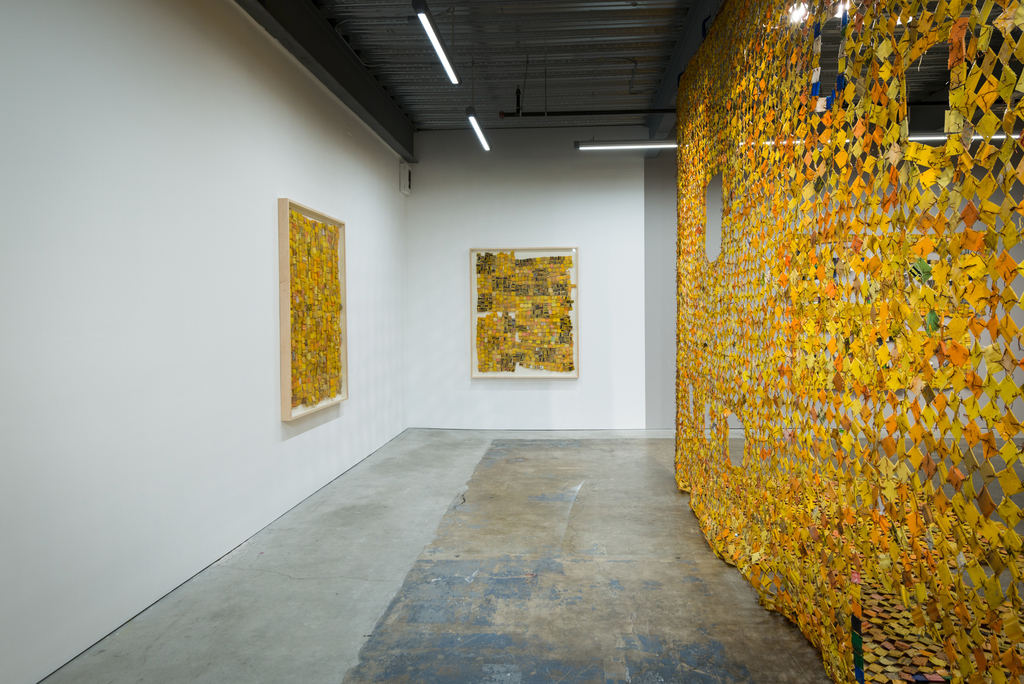 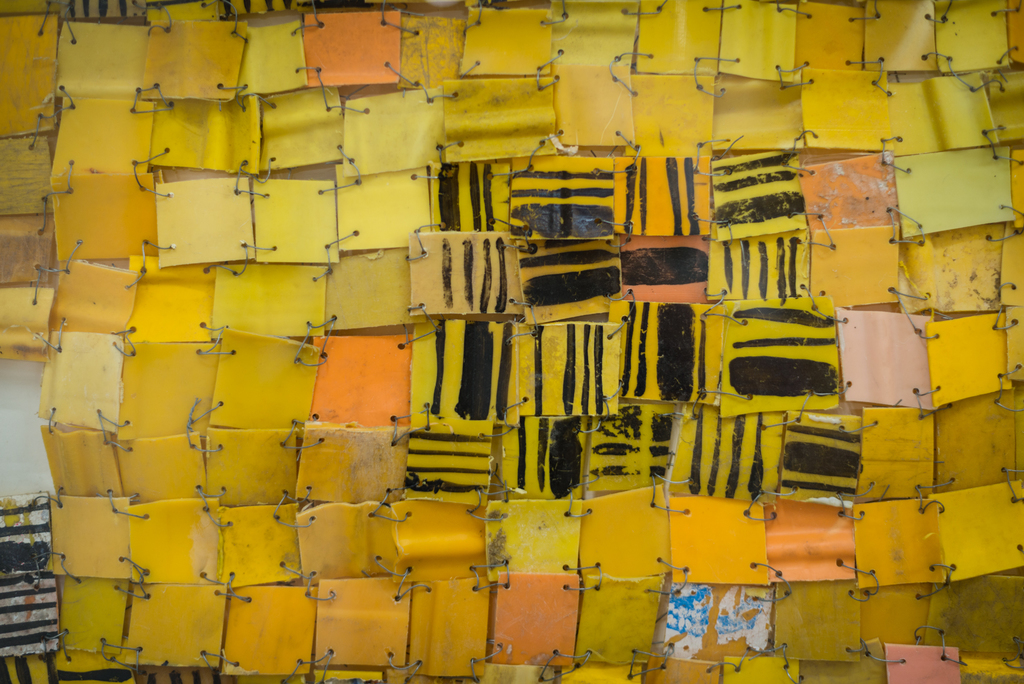 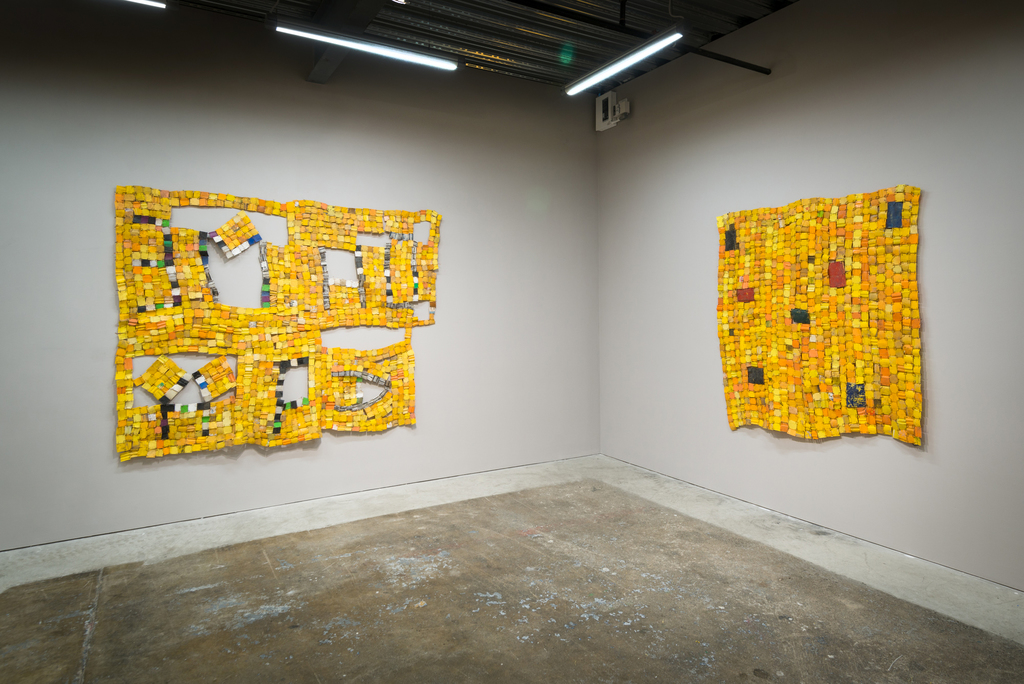 Ever Gold [Projects] presents ADESA WE, Serge Attukwei Clottey’s third solo exhibition with the gallery. Clottey is a Ghanaian artist who has cultivated an international following while living and working in the country’s capital city, Accra. The exhibition’s title translates to “storytelling home,” referencing the narrative quality of the artist’s work; Clottey weaves together stories of past and present, examining current political, social, and environmental issues alongside his ancestral migration and other family histories. For the exhibition at Ever Gold [Projects], Clottey presents new large-scale mixed media wall works, charcoal drawings, and sculptures in wood and bronze. In his practice, Clottey asserts a deep connection to the traditions of Ghanaian culture while navigating the at times complex relationship to the Western canon and aesthetics. Clottey’s work is often concerned with cultural and material exchange between Africa and the West, and many of his sculptures feature a particular kind of imported plastic which Clottey and his studio remove from circulation and the local waste stream through their work.

The plastic Clottey uses in many of his wall-hanging sculptures is cut from water containers known as Kufuor gallons named after former Ghanaian president John Kufuor, who created distribution centers for water during a devastating drought in the early 2000s. People would wait in long lines to fill these containers, transporting them home for use or elsewhere for resale. Often bright yellow in color, these gallons may bear different identifying marks indicating the carrier’s language, religion, or political beliefs. Recent years have brought a number of large-scale water expansion projects to Ghana, and the country now has the highest percentage of access to potable water in Western Africa. Despite these changes, the Kufuor gallons are still found in use as storage for cooking oil and water. Clottey, among others, believes they were not particularly safe vessels for drinking water to begin with and seeks to raise awareness about their potential to leach harmful chemicals into their contents, as well as their cumulative environmental effects—The Displaced, a 2016 film by the artist viewable online, demonstrates the sheer volume of plastics present in the country’s coastal waters. Clottey’s studio collects and buys Kufuor gallons back from members of the local community, removing them from use. They are cut into rough squares and wired together into wall-hanging sculptures with copper, a valuable commodity in the Ghanaian market and another source of environmental degradation. Mining operations by foreign companies extracting copper and other materials have caused water pollution, damage to forested areas and wildlife habitats, and various threats to human health.

Some of Clottey’s plastic and copper works are large enough to cover a building facade, as seen in recent installations at Facebook in Menlo Park and the Vestfossen Kunstlaboratorium in Norway. Reconfiguring this polluting material as a valuable cultural commodity, Clottey quite literally gives a second life to the remnants of Western help-gone-awry. In sculptures and performances, Clottey isolates the tops of the containers to produce a mask-like form that he inserts in place of traditional (and famously appropriated) African masks, referring to the form as a “mask for our time.”

These mask-like forms also appear in Clottey’s charcoal drawings, which play on the history of cultural exchange between Africa and the West, and in particular Picasso’s African Period. Clottey’s visual language, strongly rooted in Ghanaian traditions, navigates this cultural relationship by utilizing traditional formats, materials, and subjects as vehicles to deliver distinctly contemporary ideas, and reclaiming aesthetic terrain through clear assertions of art historical awareness. It is notable that contemporary African artists are increasingly fostering their own creative communities, and as a result, becoming better able to navigate the global art world and market as a result of strong local networks and support systems. Much of Clottey’s practice is performative and public, involving and invigorating the local community. Clottey’s studio provides work for a group of collaborators known as GoLokal—approximately 100 people intermittently work alongside Clottey to produce artworks and performances, with the performances often functioning as political/environmentalist actions. Simultaneously embedded in his community and deeply engaged with the international art world, Clottey’s practice presents a powerful model for contemporary African artists living and working on the continent.

Serge Attukwei Clottey (b. 1985, Accra, Ghana) lives and works in Accra, Ghana. Clottey attended the Ghanatta College of Art and Design in Ghana before studying at the Escola Guinard University of Art in Brazil and has completed multiple fellowships abroad. He works in a variety of media including performance, photography, video, painting, drawing, and sculpture. Recent exhibitions include Serge Attukwei Clottey: Solo Chorus at The Mistake Room (solo, Los Angeles, 2019); Sometime in your life at Lorenzelli Arte (solo, Milan, 2019); KUBATANA at Vestfossen Kunstlaboratorium (Vestfossen, Norway, 2019); Current Affairs at Fabrica Gallery (solo, Brighton, 2019); Gold Standard at Ever Gold [Projects] (San Francisco, 2019); Defying the Narrative: Contemporary Art from West and Southern Africa at Ever Gold [Projects] (San Francisco, 2018); Everyday Myth: Survival and Sustenance at Ever Gold [Projects] (solo, San Francisco, 2018); Differences between at Jane Lombard Gallery (solo, New York, 2018); The Displaced at Gallery 1957 at Lawrie Shabibi Gallery (solo, Dubai, 2018); Hand to Mouth at Ever Gold [Projects] (solo, San Francisco, 2016); My Mother's Wardrobe at Gallery 1957 (solo, Ghana, 2016); Earthly Conversations at GNYP Gallery (solo, Berlin, 2016); The Displaced at Feuer/Mesler (solo, New York, 2015); We Don't Contemporary at Kampnagel Hamburg (Hamburg, 2015); The Silence of Ordinary Things at The Mistake Room (Los Angeles, 2015); Du Bois In Our Time II at the University Museum of Contemporary Art (Amherst, MA, 2014); and Cultures in Confluence at the Goethe-Institut Ghana (Accra, 2011). His work is in the collection of the Nerman Museum of Contemporary Art (Overland Park, Kansas), the Museum of African Contemporary Art Al Maaden (Marrakech, Morocco), the Nubuke Foundation (Accra, Ghana), the Seth Dei Foundation (Accra, Ghana), Modern Forms (UK), and The World Bank Collection (Washington D.C.), as well as a number of international private collections.