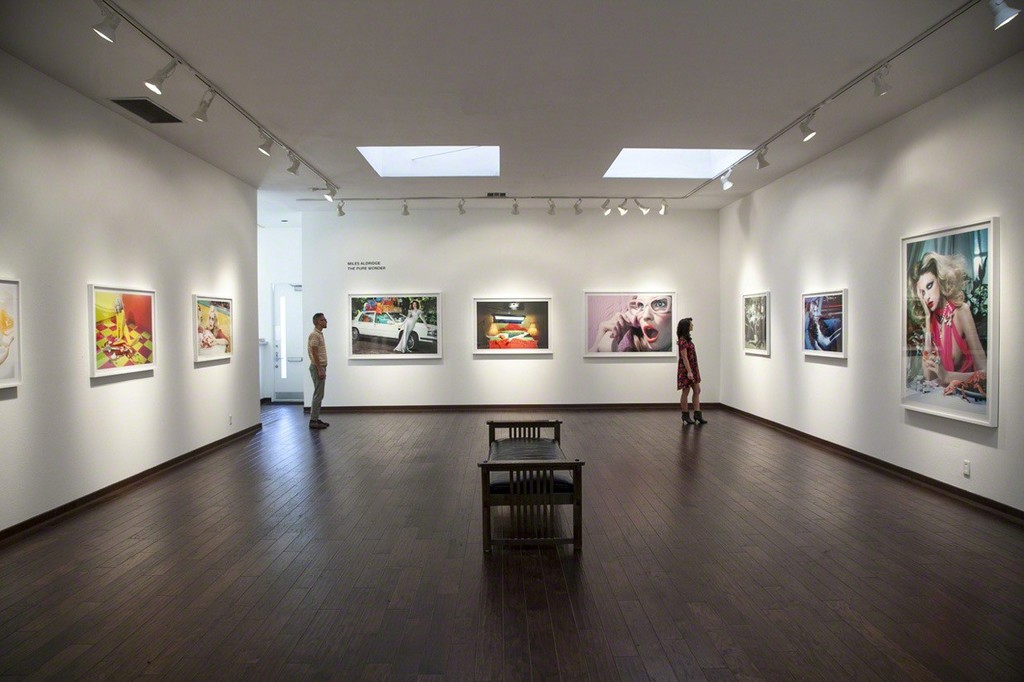 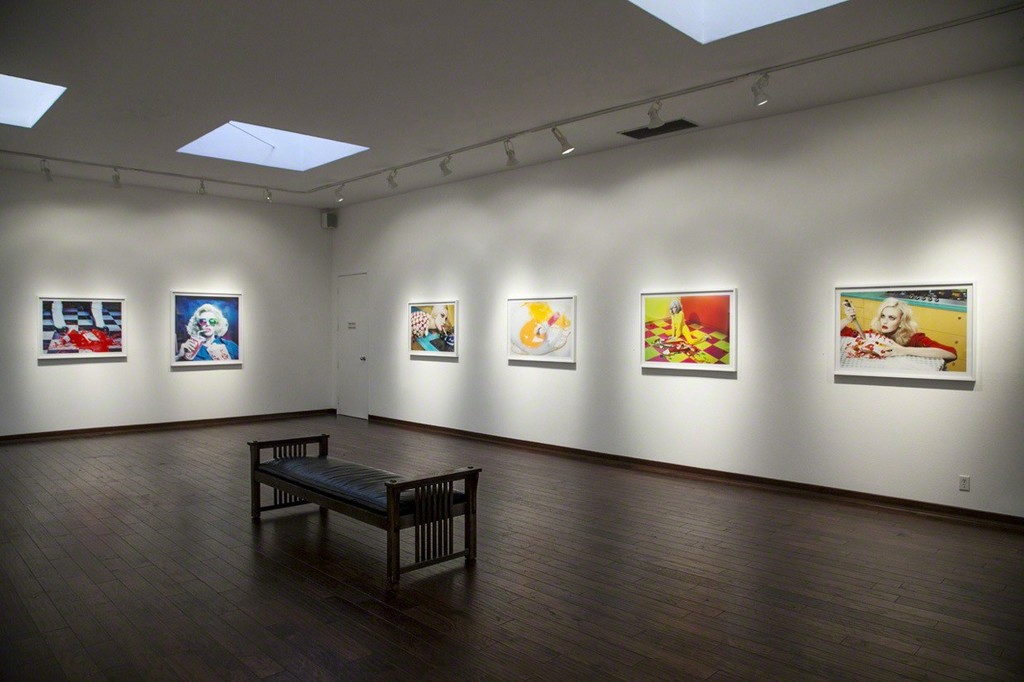 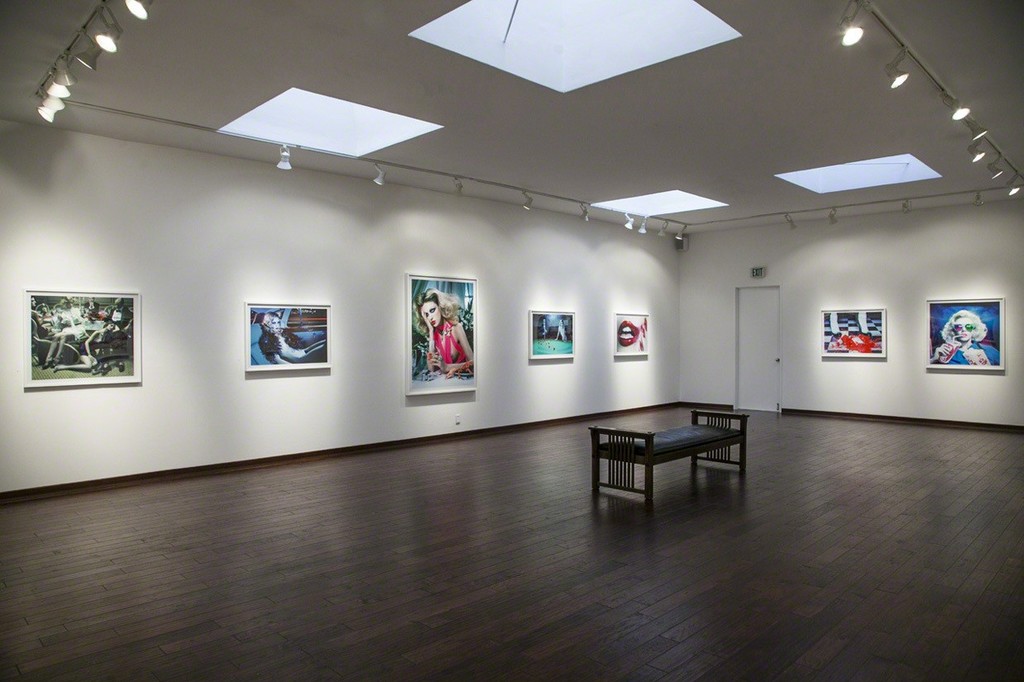 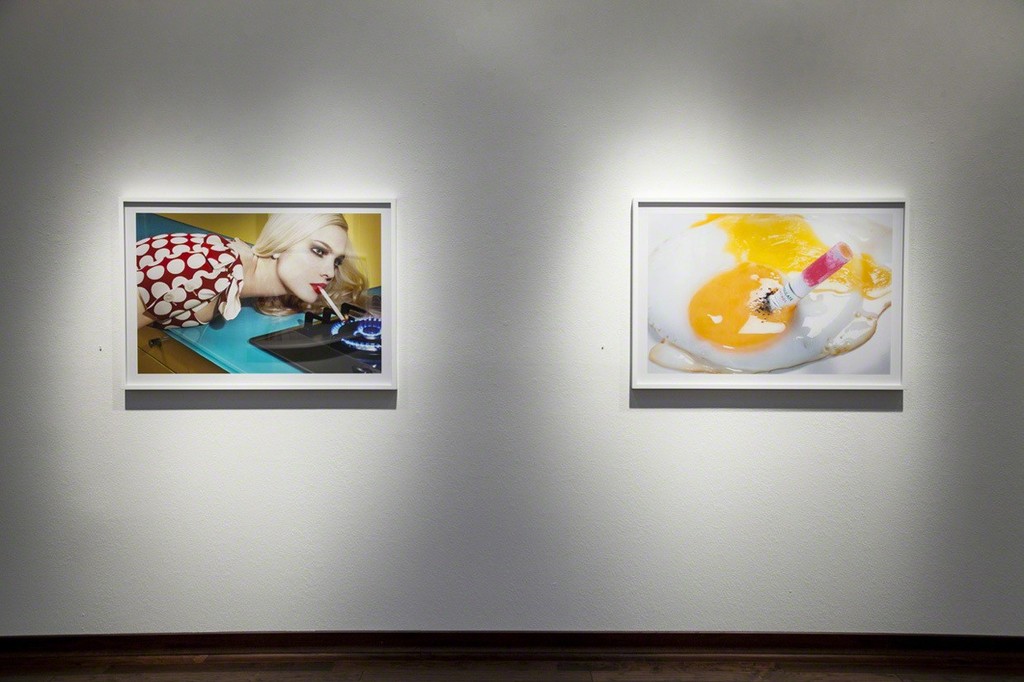 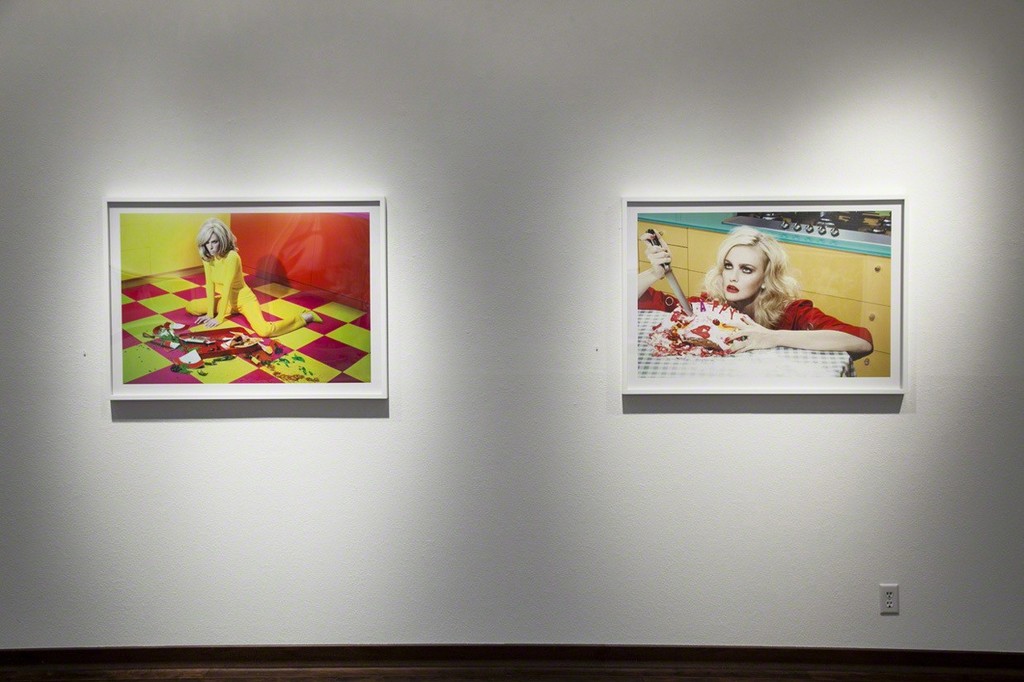 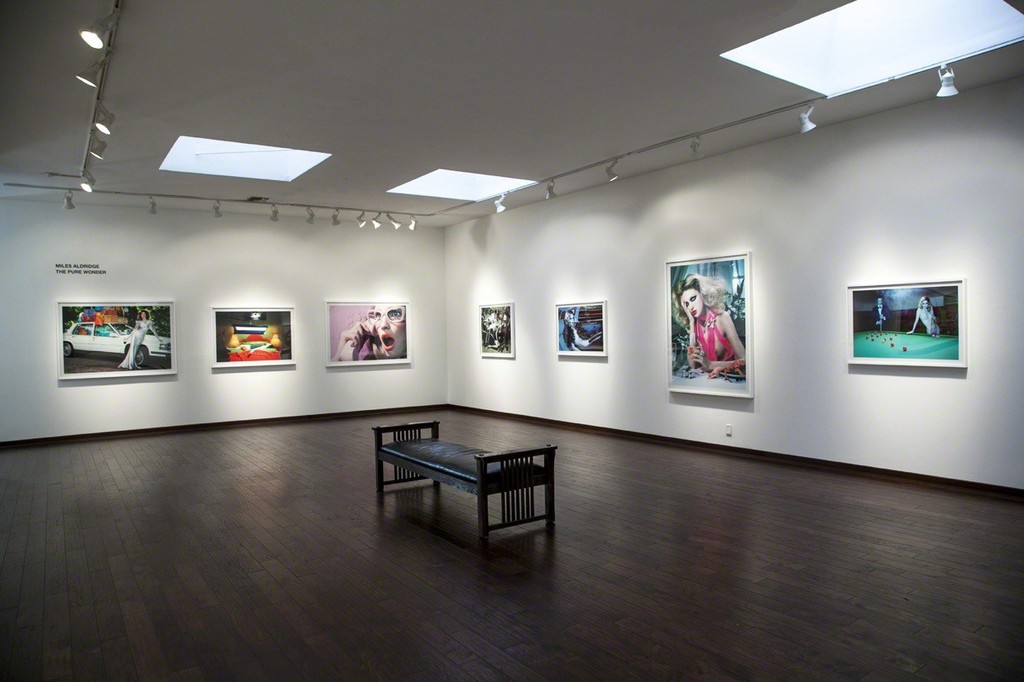 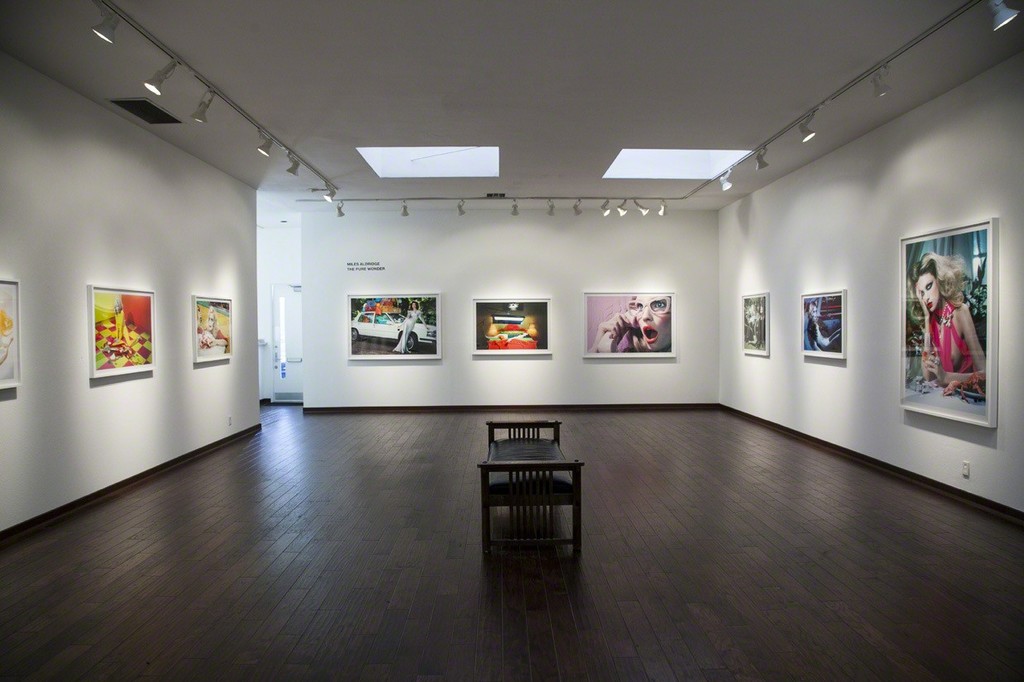 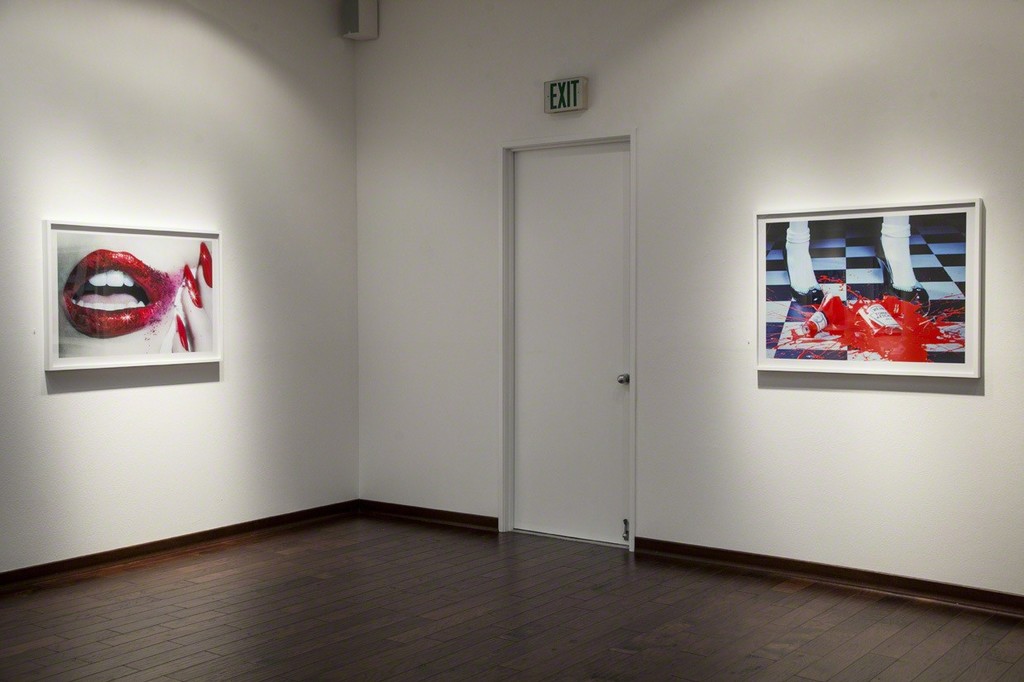 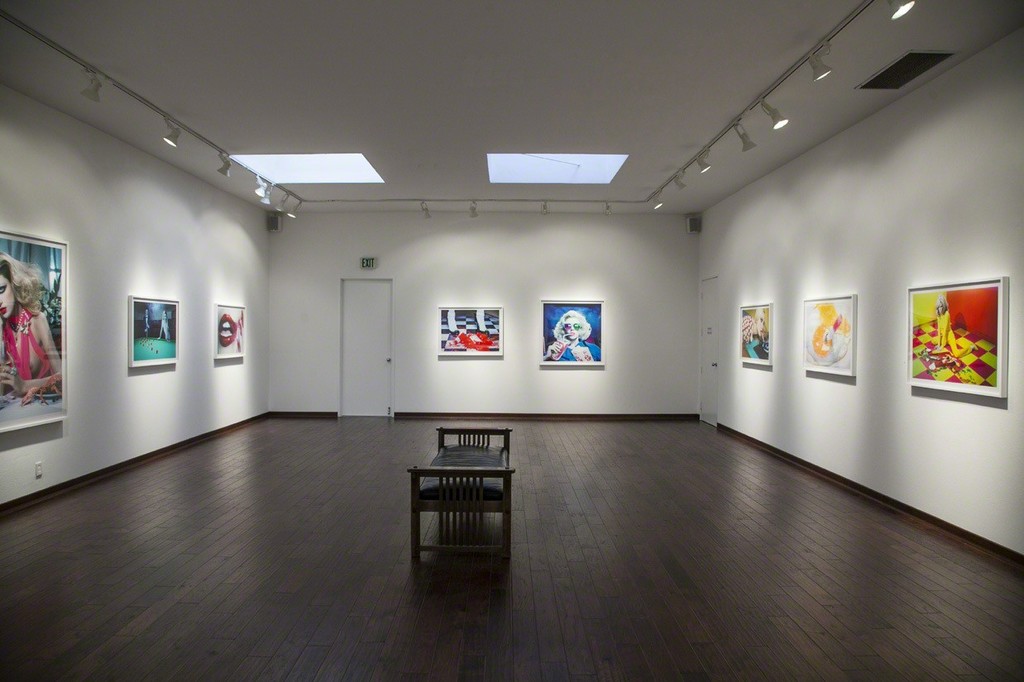 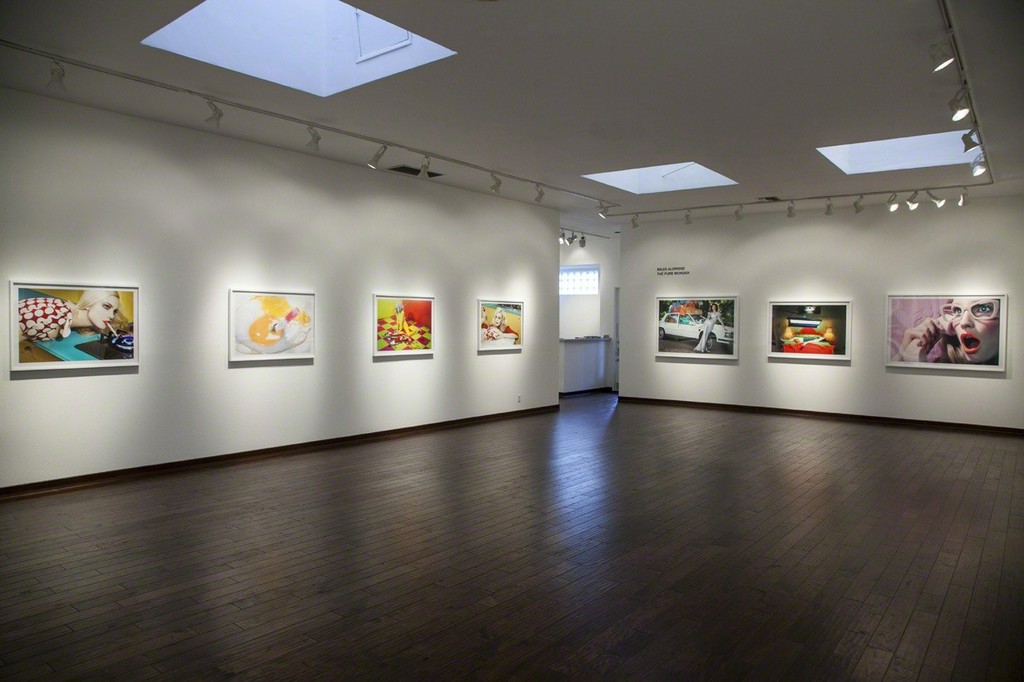 Equally obsessed with women and with color, Miles Aldridge masterfully creates visually compelling images. Working like a filmmaker, Aldridge’s world is a confluence of dream and reality. His images contain hyper-real scenes occupied by impossibly beautiful women, each an embodiment of seeming perfection. Every image however belies a darker sense of mystery and unease. Staring off vacantly, a beautiful blonde stabs a birthday cake with a knife, screams into a phone, or nonchalantly lights her cigarette on a stove while the gas flames lick her hair. Each arresting scene Aldridge has created explores the complex dualities of contemporary life—perfection and damage, violence and passivity, the mundane and the bizarre. Aldridge has simultaneously created both a dream world and a nightmare where anxiety, melancholy, and boredom seem so beautiful, it is impossible to look away.

Although Aldridge’s fantasy world is glamourous, his work cannot be defined as purely Fashion photography. Aldridge’s photographs have a keen sense of self-awareness and a brilliant dark humor, which allow Aldridge to play within the Fashion genre but not be confined by it. Drawing on his early history as an illustrator, Aldridge begins crafting a photograph by first creating a storyboard drawing, and then building a meticulously conceived set. This approach produces a highly stylized and obsessively detailed cinematic image that resembles a film still. Aldridge’s photographs then play out like a scene from a noir film, compelling the viewer to keep watching to witness what happens next.
“All of my pictures have one recurrent idea—a kind of simultaneous attraction and repulsion, a kind of push and a pull from within them. You are drawn to the image but at the same time, disturbed by it. If I had to summarize my work, to give it a motto that could be emblazoned in Latin above the door of my studio, it would be- An ugly thing photographed beautifully. Meaning that it is something troubling, that is not pleasant, but by the trick of beauty, you are drawn into it and feel slightly uneasy having witnessed it. It has now entered your blood stream. It sears your consciousness. It has ambushed you.” (Interview with Maurizio Cattelan, Carousel Exhibition Catalogue, Sims Reed Gallery, 2014)
Born in London, Miles Aldridge studied illustration at Central St Martins, and worked as a music video director before becoming a fashion photographer in the mid 1990’s. Aldridge’s photographs have been published internationally in Vogue Italia, American Vogue, Numéro, The New York Times, The New Yorker, and Time Magazine among others. In 2013, a major retrospective of Miles Aldridge’s work was exhibited at the Somerset House in London. Miles Aldridge’s work has been collected internationally and is in the permanent collection of the National Portrait Gallery and the Victoria & Albert Museum.