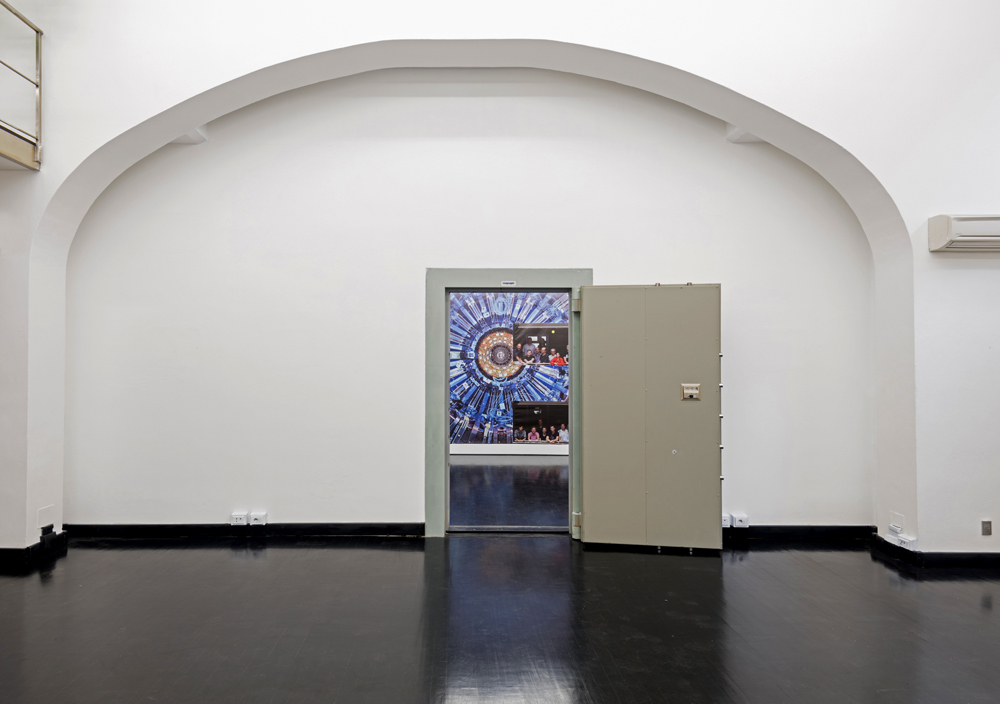 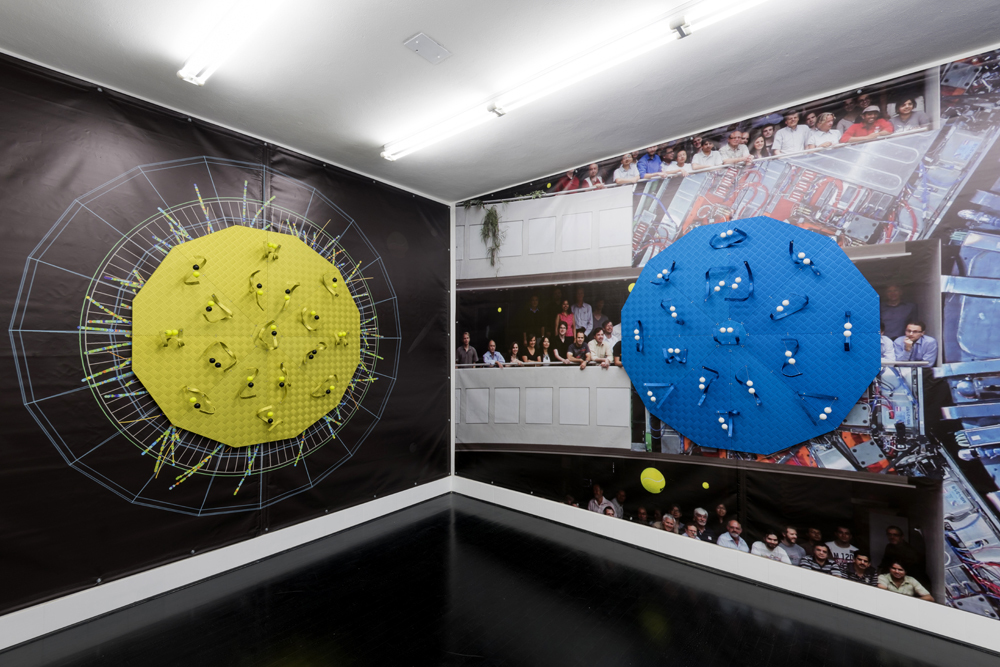 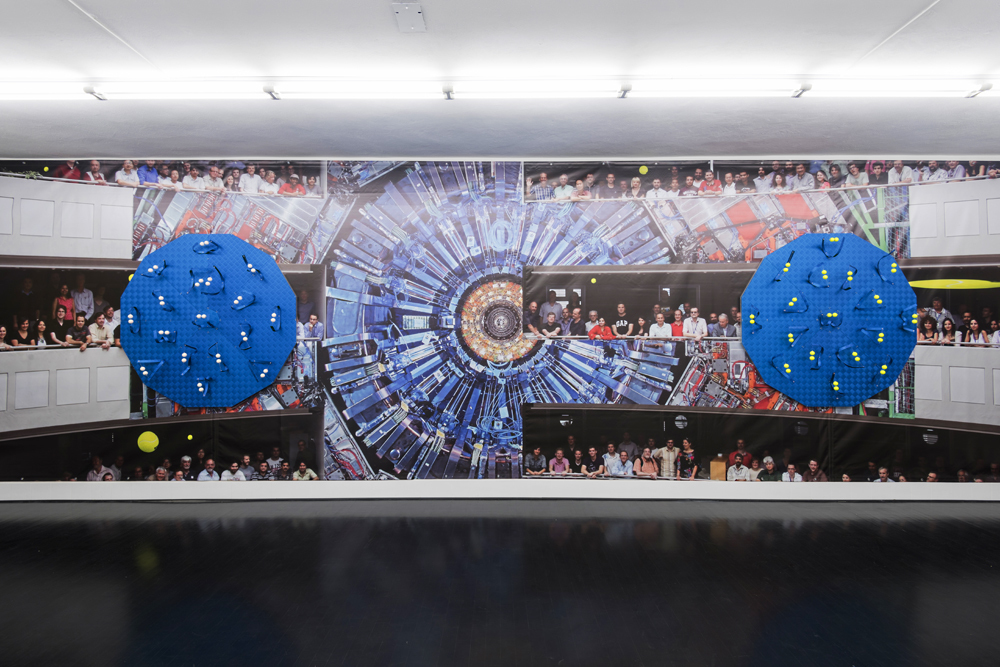 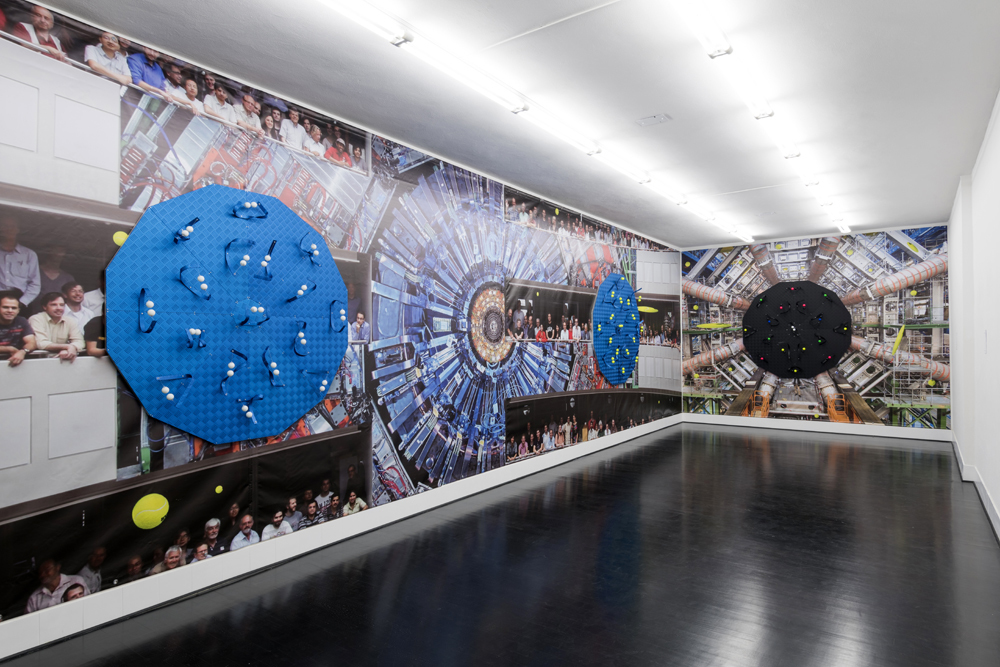 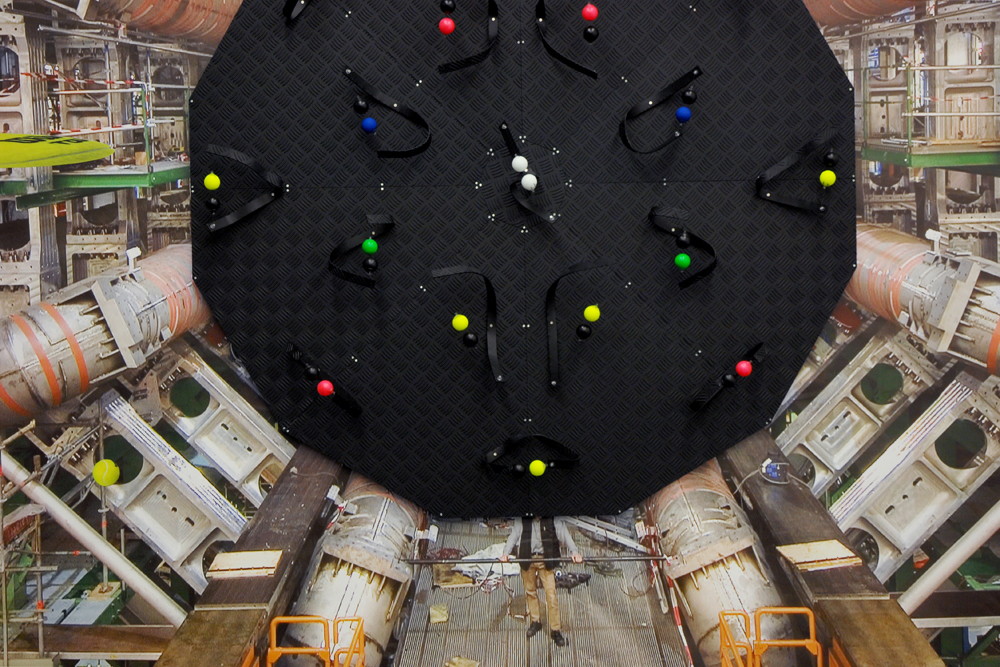 FL GALLERY in collaboration with the CMS Experiment of CERN is pleased to present Luca Pozzi’s third solo exhibition in its spaces. The project is dedicated to the Italian director of the European Organization for Nuclear Research, Fabiola Giannotti, and conceived by the artist as a celebration of 13 TeV, collision energy expressed in tera electron volt, achieved by the Large Hadron Collider in May this year. An outstanding achievement that has allowed for the first time in human history to probe the matter in regions to scale smaller than the dimensions of quarks (<10-18 meters).

The site-specific installation, located in the former vault of Viale Sabotino 22, is composed of three giant digital photos on PVC taken from CERN and LHC experiments online archive to entirely cover three walls of the room. On these surfaces Pozzi installs the works consisting in four dodecagonal surfaces of anodized aluminum containing thirty ping-pong balls in magnetic suspension. The “Detectors”, the name of this new series and title of the exhibition, are intended by the artist as pictorial devices suspended in space and time. They represent, through the sportive allegory of the ping-pong game, the particle of the beam captured just a moment before a hypothetical collision within one of the four LHC detectors.

The right wall of the gallery is connected, in a prospective game, to the “Atlas” detector during the construction years; highlighting in this way the existence of a past time preceding the experiment. The left wall breaks instead on a graphical display representing the computerized processing of data obtained from a collision in the detector “Alice”; spotlighting a later time in the experiment. Finally, on the twelve meters long front wall a photograph taken by Michael Hoch from CMS is reproduced, it represents the part of CMS community responsible for the design, construction and implementation of CMS experiments. They are greeting the art public and receiving them in the exhibition from the building 40 at CERN in Geneva. These tireless and determined researchers are portrayed together in this historical shot; they constitute in this case a window that Pozzi opens into the future.

Past, present and future are so intimately connected in a network of relationships where there are explicit references to art history. Luca Pozzi’s passion for Lucio Fontana, Frank Stella, Alberto Burri and Enrico Castellani blends in subtle cross-disciplinary references, magically combining contemporary art and science, informatics and technology. Since his first visit to the CERN, in April of 2009, the artist begun to cultivate the idea of a project that would pay homage to the International Laboratory. Luca Pozzi is not only interested in the theoretical research, of which he esteems and appreciates the more speculative aspects of quantum gravity, but extends also to the chain reactions based on it thereon. Worthy of note is that it was in the same CERN Laboratory that Tim Berners-Lee developed, in October of ’90, the application that started the World Wild Web and the digital revolution of the Internet, which has so greatly changed the course of our lives.