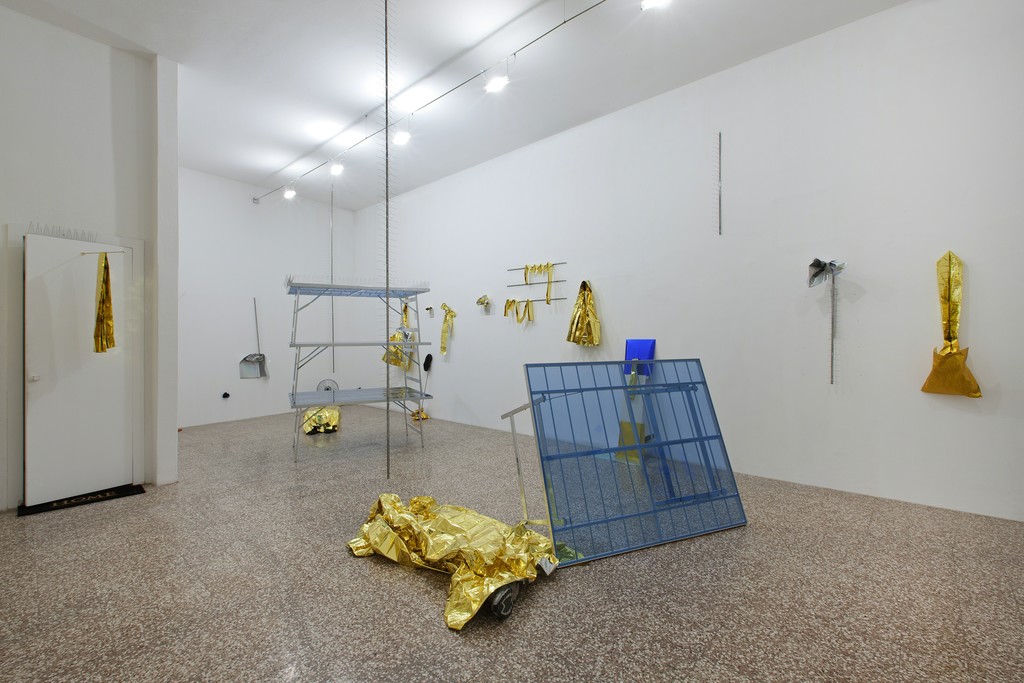 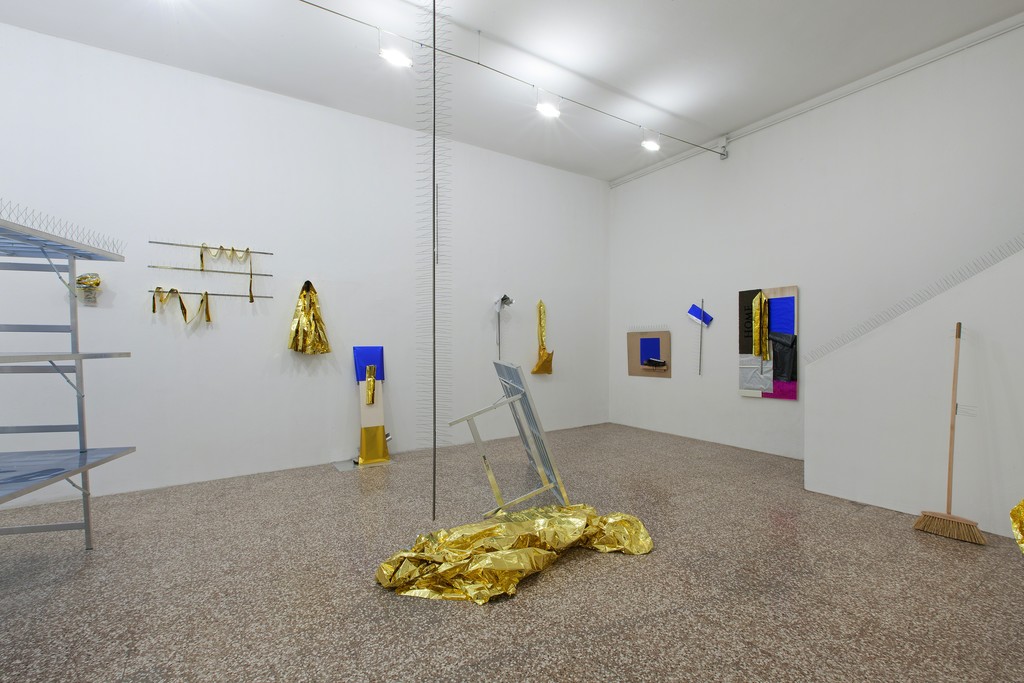 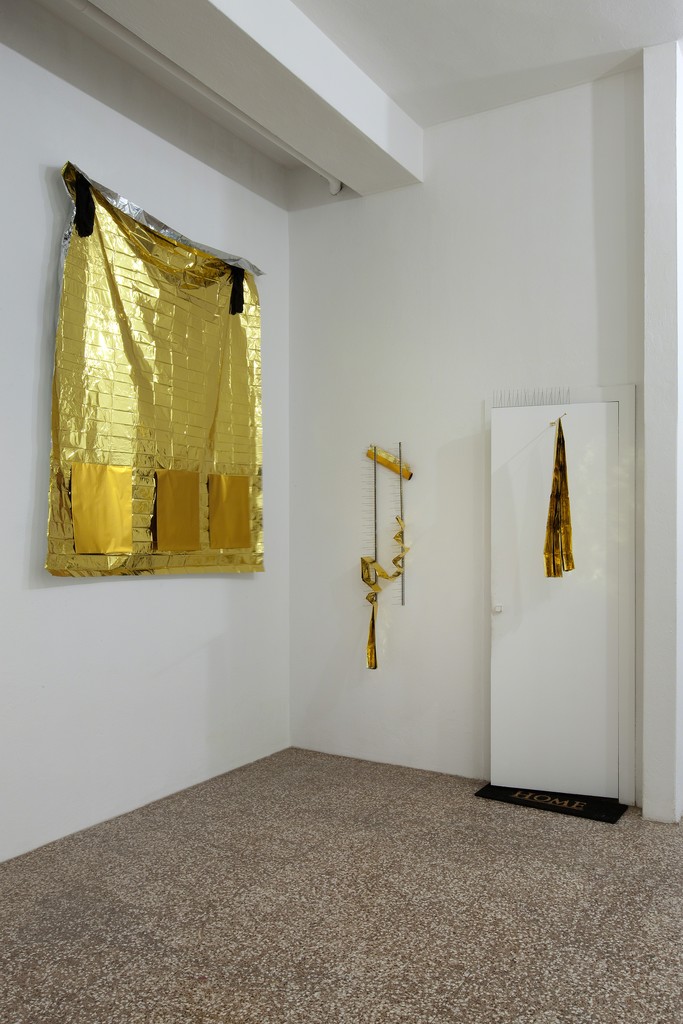 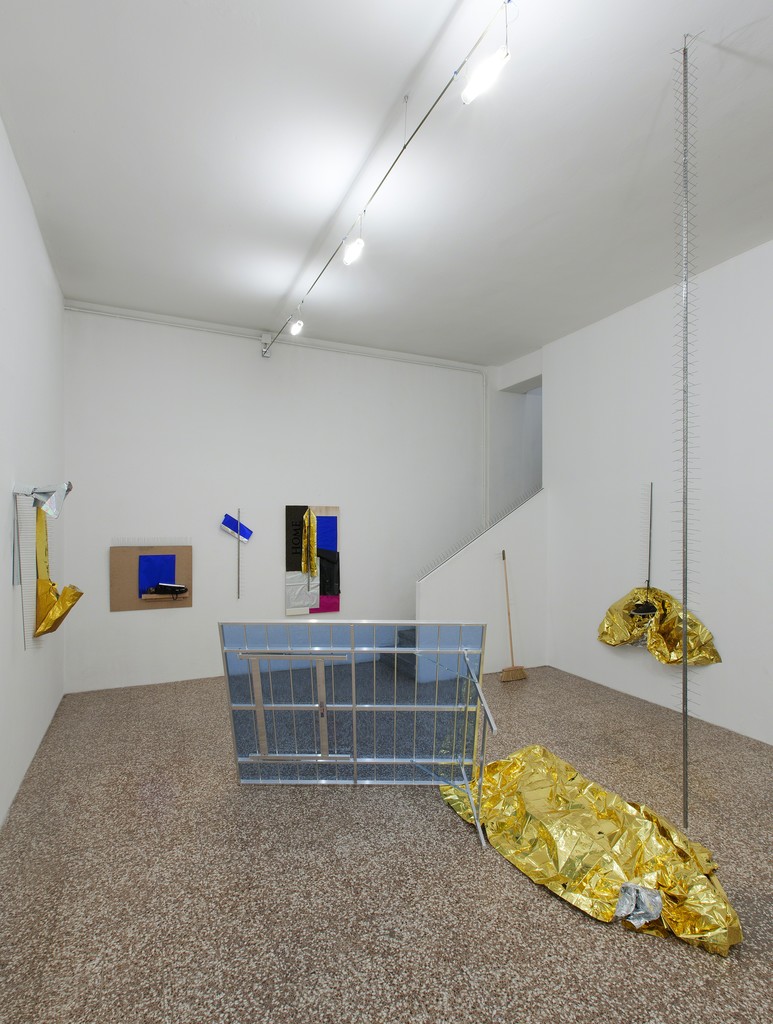 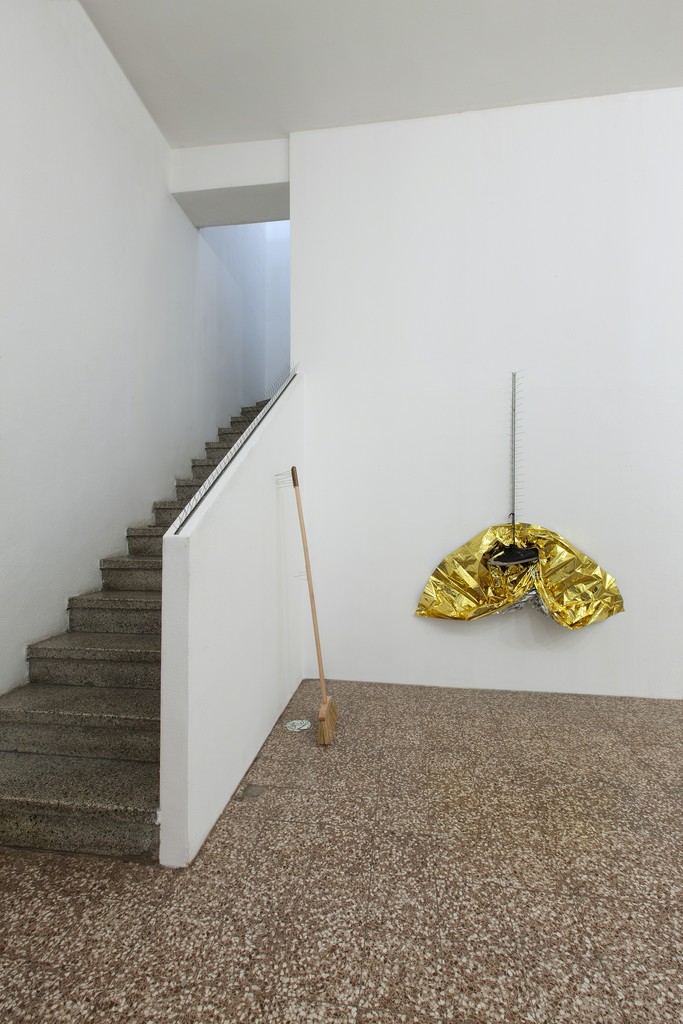 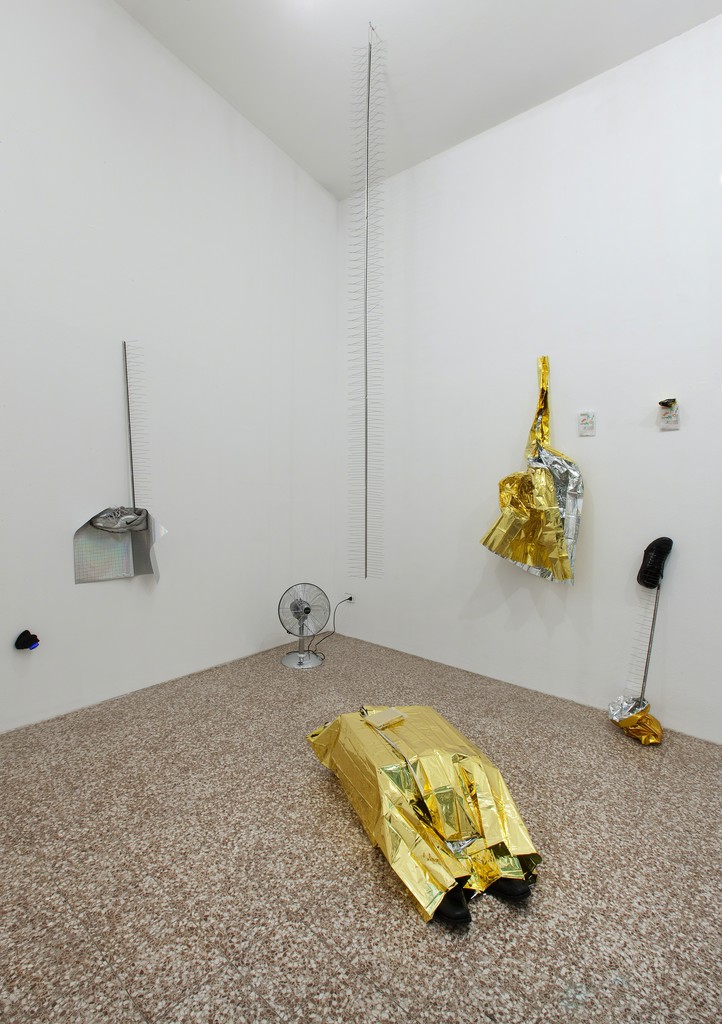 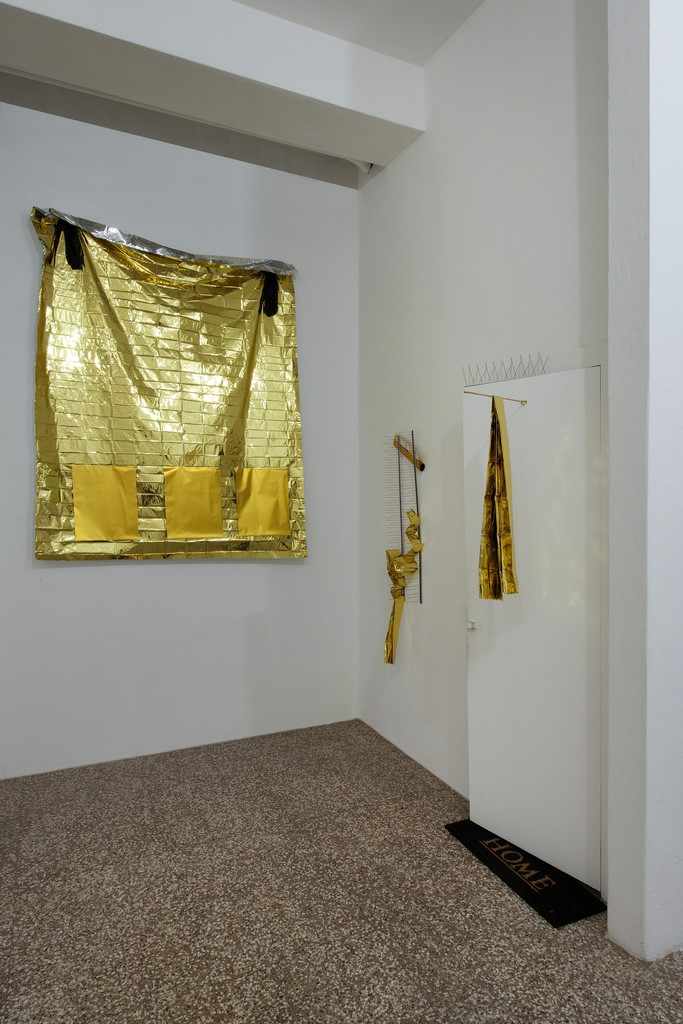 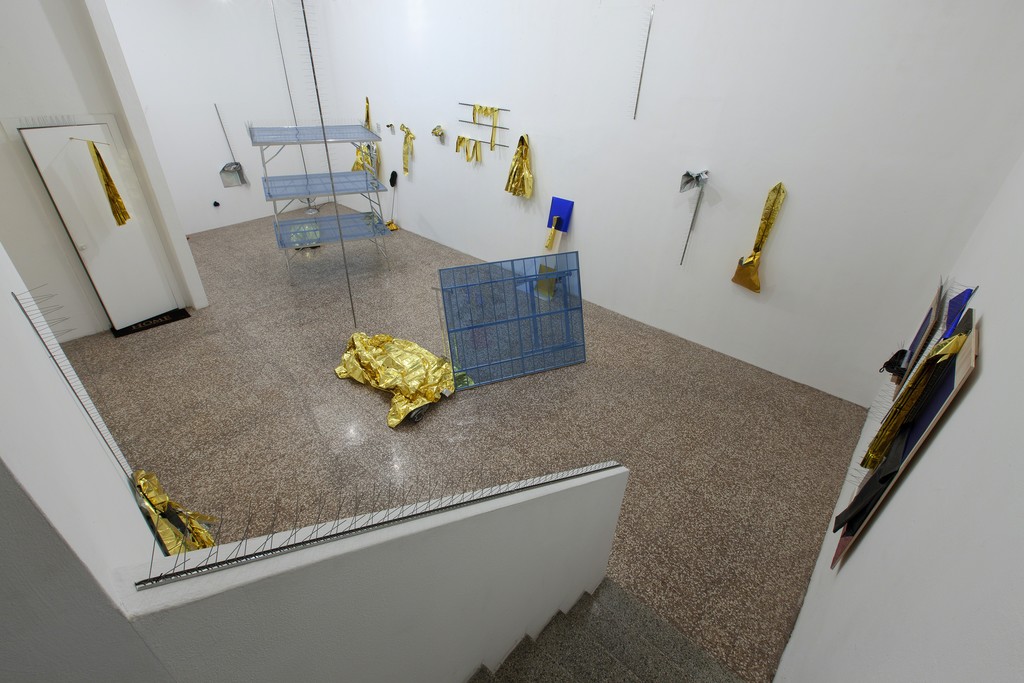 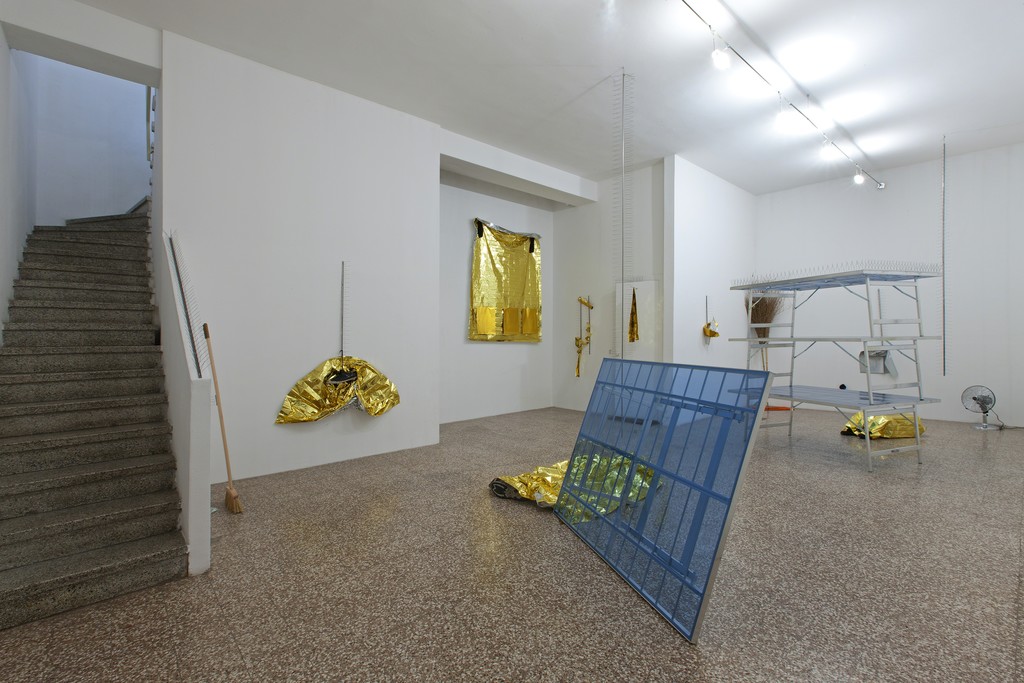 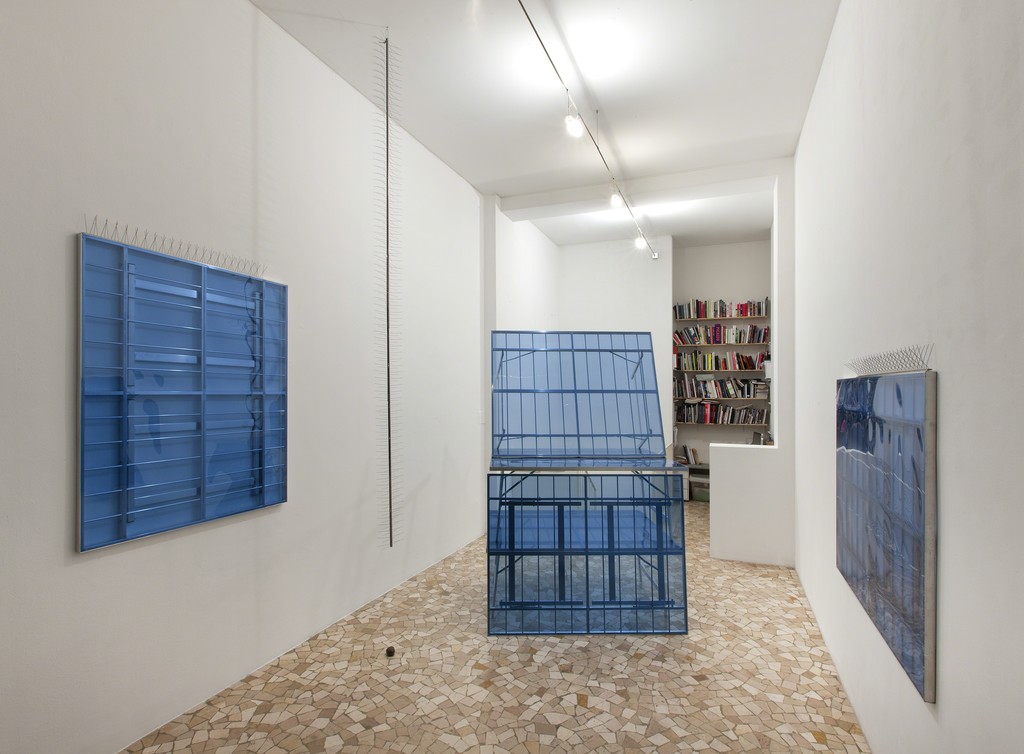 FL GALLERY is proud to present Inconveniente, a solo exhibition by Bruna Esposito, one of the best known and relevant Italian artists of the generation emerged in the Nineties.
The project presents a corpus of new works inspired by the inconvenient (inconveniente in Italian), a concept that the artist takes as a starting point for a non-linear reflection on the unexpected, the unforeseen and the non-convenient, understood as obstacle as well as resource.
The exhibition turns, in this way, in a research on the complexity of art and of life itself, and embraces with empathic poetry the surrounding world through heterogeneous, familiar and evocative materials, such as street market tables, gift wrapping paper and isothermal blankets. The artist quotes the word in the Enciclopedia Treccani (the Oxford Dictionary for the English version) and comments: “inconvenient adjective causing trouble, difficulties, or discomfort : she telephoned frequently, usually at inconvenient times. Origin: late Middle English (originally in the sense [incongruous] or [unsuitable]): via Old French from Latin inconvenient-, from in- ‘not’ + convenient- ‘agreeing, fitting’ (see convenient). Current senses date from the mid 17th cent. Thesaurus: awkward, difficult, inopportune, untimely, ill-timed, unsuitable, inappropriate, unfortunate; tiresome, troublesome, irritating, annoying, vexing, bothersome; informal aggravating. This word bounces in my mind even as a suitable title for the show.
What makes me think this way? To make an artwork and to make an exhibition can turn out to be “inconvenient”? What motivates us, when a serious inconvenient happens, to make something anyway? I choose outdoor market tables, rescue blankets and gift wrapping papers to make and present a new range of works inspired by the ‘inconvenient’.” After structuring the suggestion through a precise linguistic definition, Bruna Esposito leaves the strict etymology–that considers the inconvenient as a synonym of disproportioned, unsuitable, untimely, or worse, of obstacle, damage or discomfort–to transform such negative acceptions into a potential resource or opportunity. A trait in Bruna Esposito's work is the use of heterogeneous materials and of languages often linked to the every day life; in an alchemic attitude, the artist re-elaborates them in a poetic fashion that involves many sensorial levels. In giving solidity to what is transitory, Bruna Esposito makes the relationship between artwork and viewer evolve in a new vision of reality, starting from the minimal appearance of the single elements to arrive to a structural monumentality intrinsic of the ensemble, made of expressive clarity and spatial awareness.
Bruna Esposito is part of that moment in Italian art that reached its peak, and its full recognition, with the Golden Lion won together with other four Italian female artists at the Venice Biennale in 1999 for the inexistent national pavilion dAPERTUTTO curated by Harald Szeemann. Thus, an artist of great depth and sensibility returns for the third time with a solo exhibition to FL GALLERY, the gallery that represents her work. Bruna Esposito was born in 1960 in Rome, where she lives and works. After finishing the Fine Arts High School, where she studied with Carmengloria Morales, she attended the Department of Architecture in the State University in Rome. From 1980 she lived and worked in New York where she studied dance with Batya Zamir and Sally Gross, and was assistant of artists Lucio Pozzi and Donald Judd. In 1984 she was selected to attend the Whitney Museum Independent Study Program. From 1985 she lived and worked in West Berlin, where she realized floating sculptures and site-specific happenings . At this time, she also received a grant in support of a project for “Two Public Compost Toilets” from the Internazionale Bauhaustellung Berlin. Her works were shown at numerous international group exhibitions: Documenta X in Kassel, the 48th and 51st Venice Biennials; the Istanbul Biennale in 2003; the Gwnagju Biennial in 2004, Sonsbeek 9, Arnhem, Holland in 2001, the Quadriennale di Roma in 1996 and 2008, Prospect 1-New Orleans in 2008, and Venice-Istanbul at the Istanbul Museum of Modern Art, Turkey in 2006. Her institutional solo exhibitions are: Clocktower P.S.1 New York in 1999, Castel Sant’Elmo in Naples and, also that year, Museo d’Arte Contemporanea del Castello di Rivoli in 2002 . Esposito's work has been awarded with the P.S.1 Italian Studio Program in 1999; the Golden Lion for the Italian Pavilion dAPERTUTTO at the Venice Biennale in 1999; the Italian Young Artist National Prize in 2000 and in 2011 with the Selection for the Chamber of Deputies Prize for the 150 years of the Italian Union.