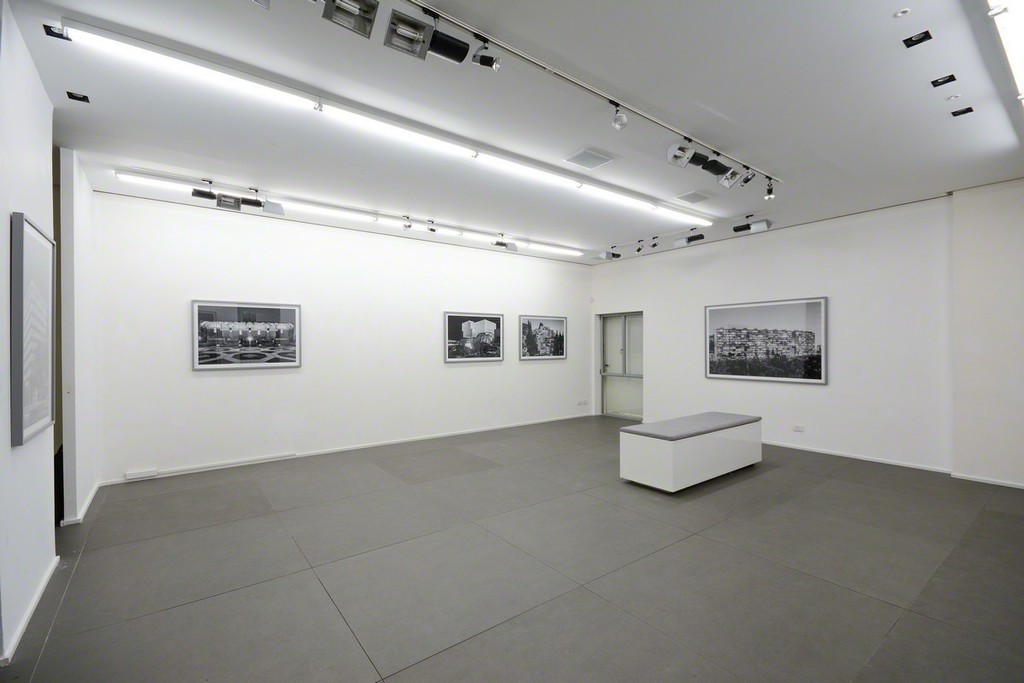 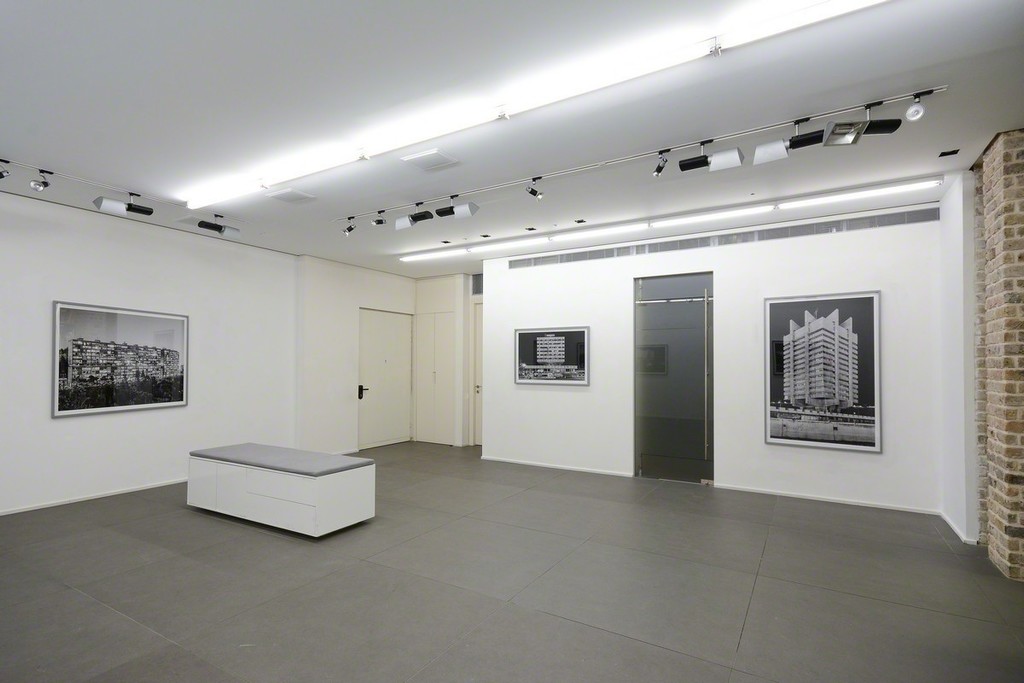 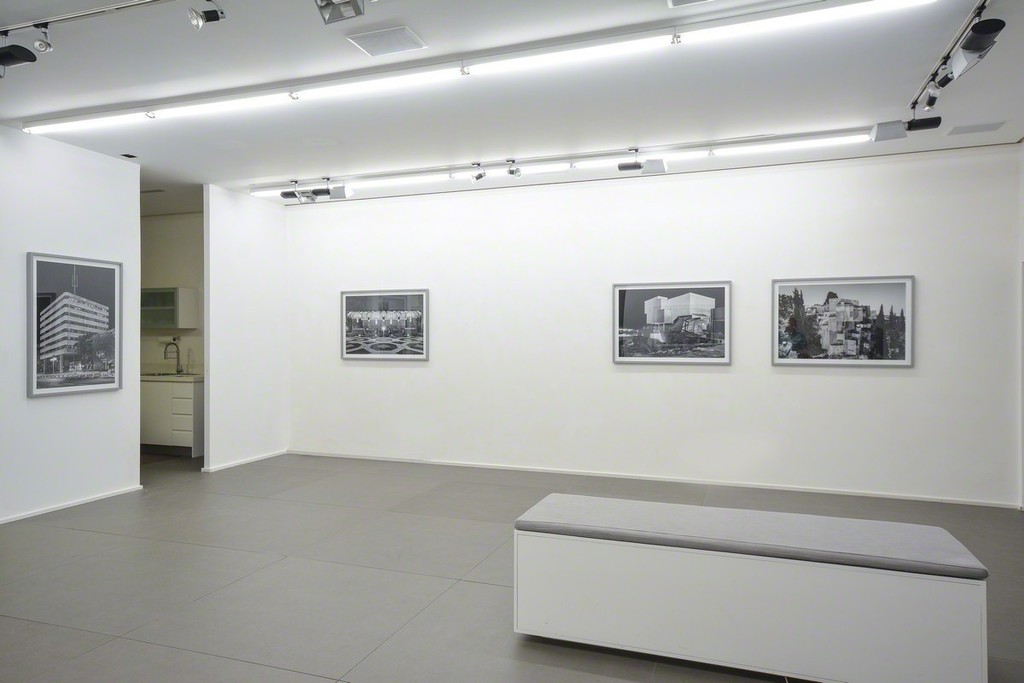 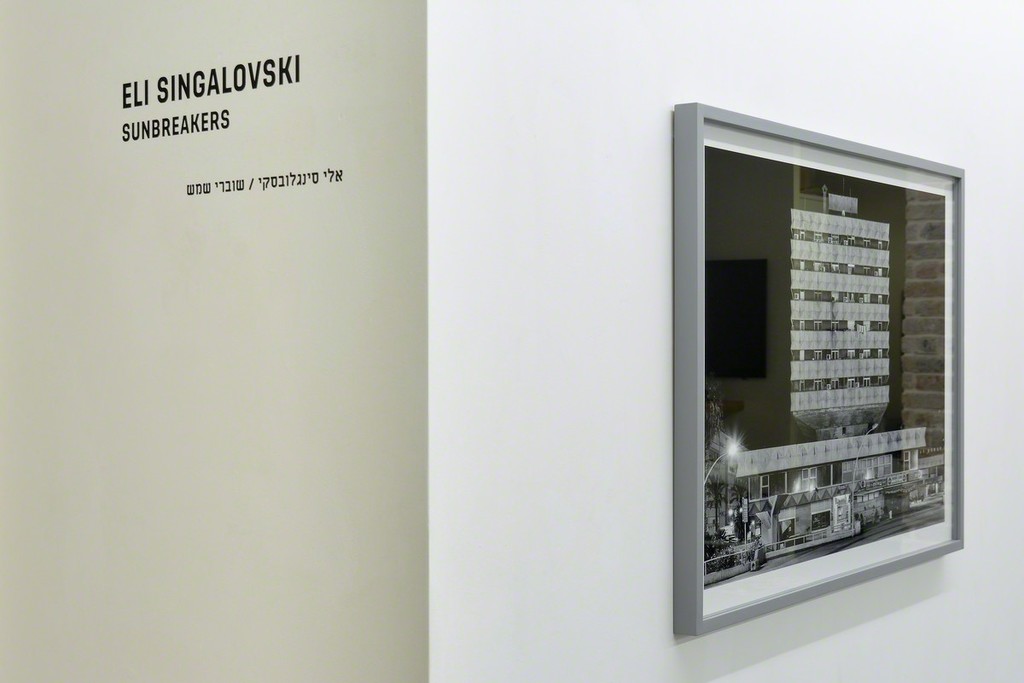 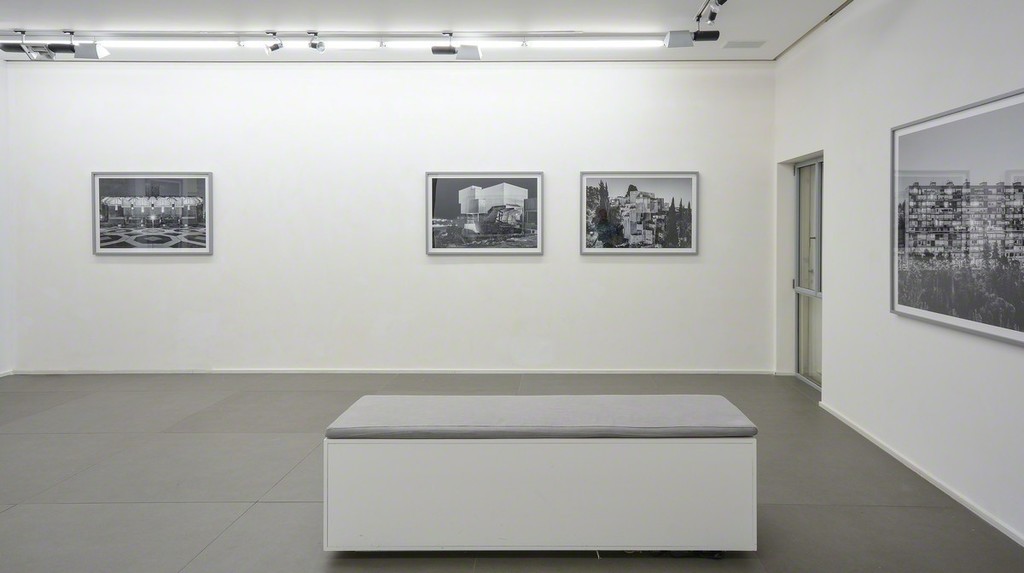 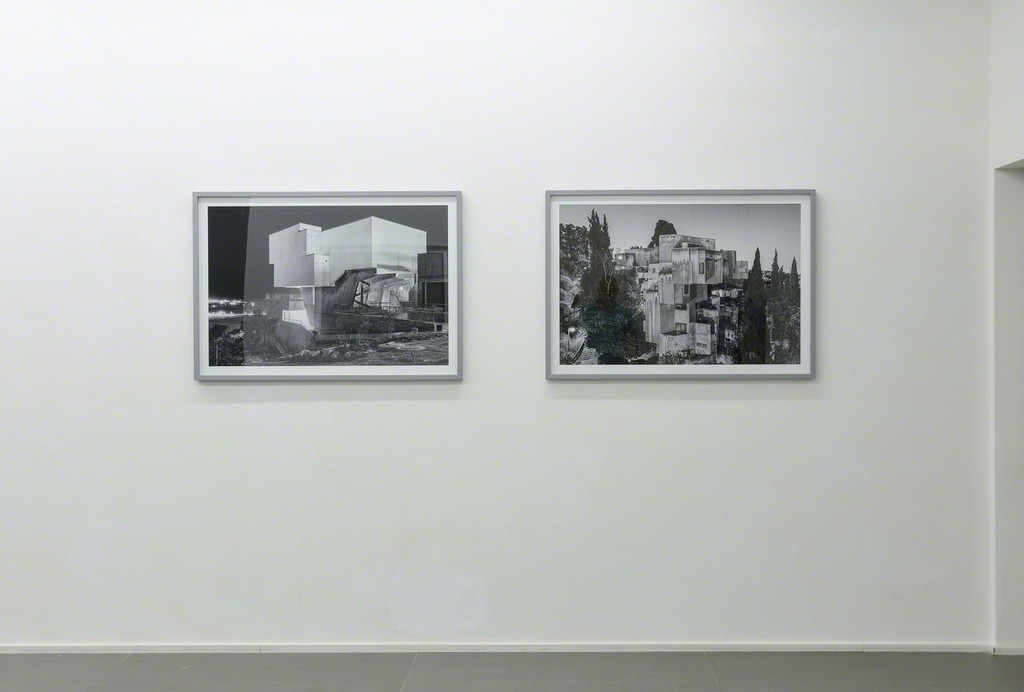 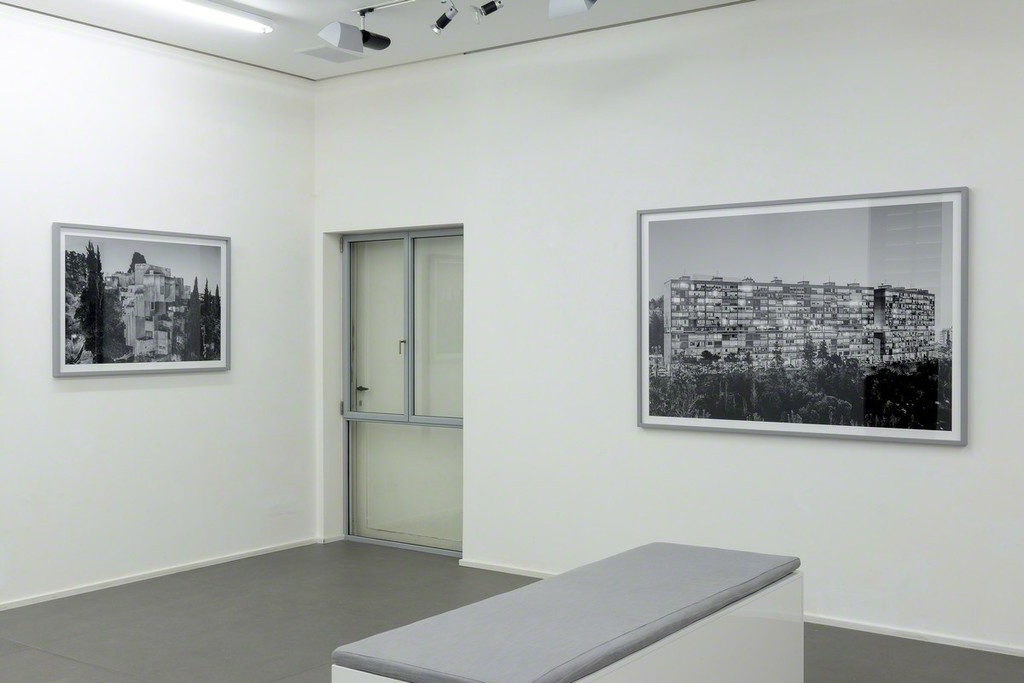 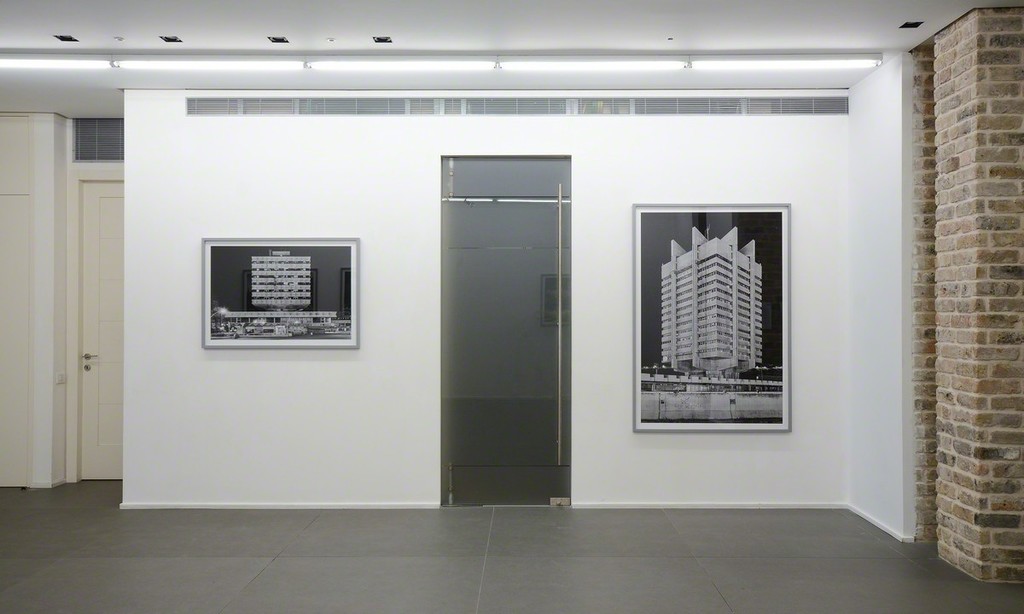 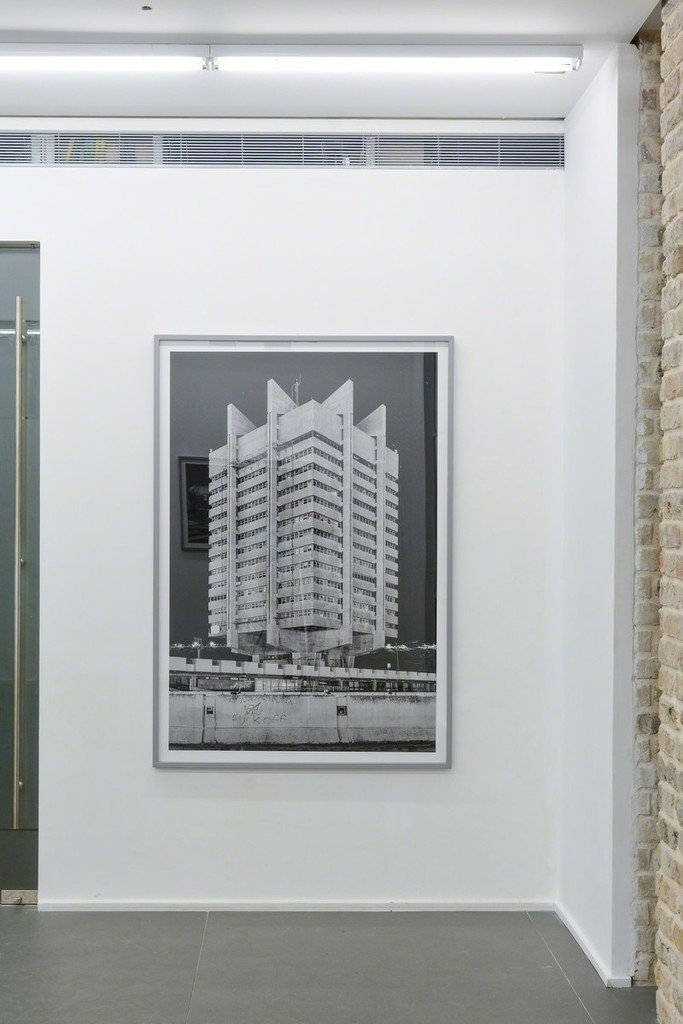 "We will clothe you in a dress of concrete and plaster", wrote poet Nathan Alterman to the State of Israel. And indeed, Eli Singalovski has commemorated through his works the concrete and plaster, the paucity of material in Israel's brutalist buildings with photographs. The special way in which the concrete is illuminated at night by glowing light, captured with time exposure, is the manner which intensifies even more the gap between ambitiousness and wretchedness, between sublime ideas and nearly violent, warlike materialism.

"…this honesty is demanded of us, to minimize plaster because it is preferable to show the natural building materials, to emphasize the construction so that it will be seen and understood, to emphasize the sutures of expansion, the intersection of concrete and even the holes of scaffolding." Abba Elhanani writes about brutalism in Israel. Brutalism is the most annoying and irritating term that modern architecture has invented for itself. It is an architectural word born after the Great War. Brutalism expressed local protests, actions and contradictory declarations, daring exposures, in an attempt to express directly and multi-sensually the material and structural "truth" of the architectural object. This is done by removing layers of plaster, paint or any other coating. Brutalism is a protest against the institutionalized Left, based on a declared aspiration to overturn the gauntlet of popularity, to exchange the standard leather – processed with the textured inner fabric. This is an architecture whose style is anti-architectural style, an architecture that strives for direct and elementary expression, like Nature itself.

Le Corbusier, who is considered the father of Brutalism, after making use of exposed concrete (Béton brut) in his "residential unit", said that "Architecture means creating exciting relations by means of raw materials. Any discussion of Brutalism will miss the point if it doesn't take into account the attempt of Brutalism to be objective… with regard to the objectives of society, the drives that motivate it, to its techniques…"

Immediately after the 1948 War and Declaration of Statehood, a quick process of intergenerational exchange took place in Israel. "The New Situation" sharpened intergenerational differences, and turned all those who had acted "before" into old people, and all those who had been prepared right afterwards into young people. In Israel this refers to a basic difference between the generation of Eastern or Central European immigrants, and an Israeli born generation, veterans of the war and the Technion. Brutalism won unprecedented acceptance and propagation, it was found in varying versions in government, Jewish Agency, kibbutz, military, academic building contractor and home architecture. The Brutalist range is the entire range between clean, elementary, hard construction, and heavy concrete castings, monotony rich in technique and poetry, in shape and texture, in plan and cross-section. In segments and blocs. This architectural happening in Israel won unprecedented resonance and publicity.

Currently, the public debate over brutalist buildings continues to flare, ranging from love to hatred, beauty and ugliness, violence and aggression. The hundreds of Brutalist buildings constructed here in the three decades after Establishment of the State, including those that survived the Israeli culture of neglect and improvisation, are threatened with destruction.

"Sunbreakers" are the most essential, wide spread building element in Brutalism, whose purpose is to reduce the accumulation of heat in the building by diverting sunlight. Some of the sunbreakers are made from processed, exposed concrete. Similarly, Brutalist structures in Israel, uncooperative hybrid creations, object strongly, protest, attempt to challenge conventions of building, to expose the scaffolding and inner junctures, tear off the covering and prove that it can stand up to it, to the sun.

Eli Singalovski's works are photographed in the dark of night, without any sunlight. Night photography separates the structure from its surrounding, isolates it like a jewel, and creates a sense of studio photography. Through his lens, Singalovski captures the building and seems to create a new covering for it, the one that was snatched from it, a covering in which the accepted aesthetics of buildings are ultimately determined to have beauty.

Eli Singalovski, born in 1984, made Aliyah from St. Petersburg at the age of 7, and grew up in Beer Sheba. Lives and works in Tel Aviv. Graduate of the Department of Photography at Bezalel, he won the EPSON prize for encouraging excellence in the art of photography for 2014. He has participated in several group shows, and this is his first solo show. His works are found in various public and private collections.