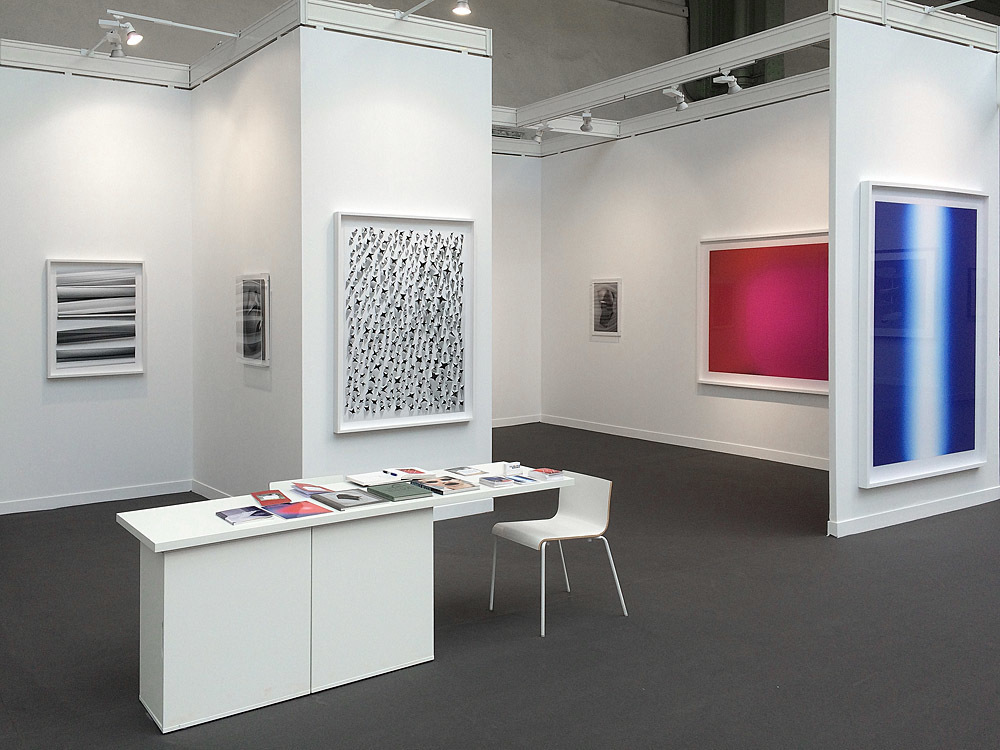 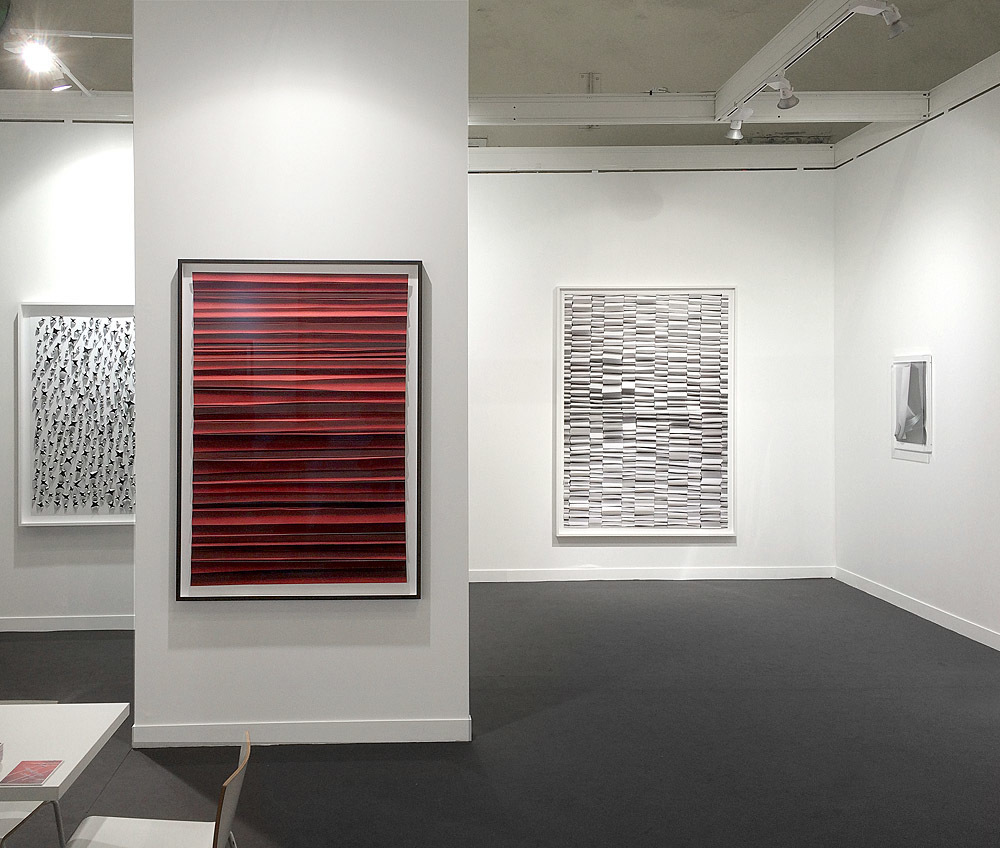 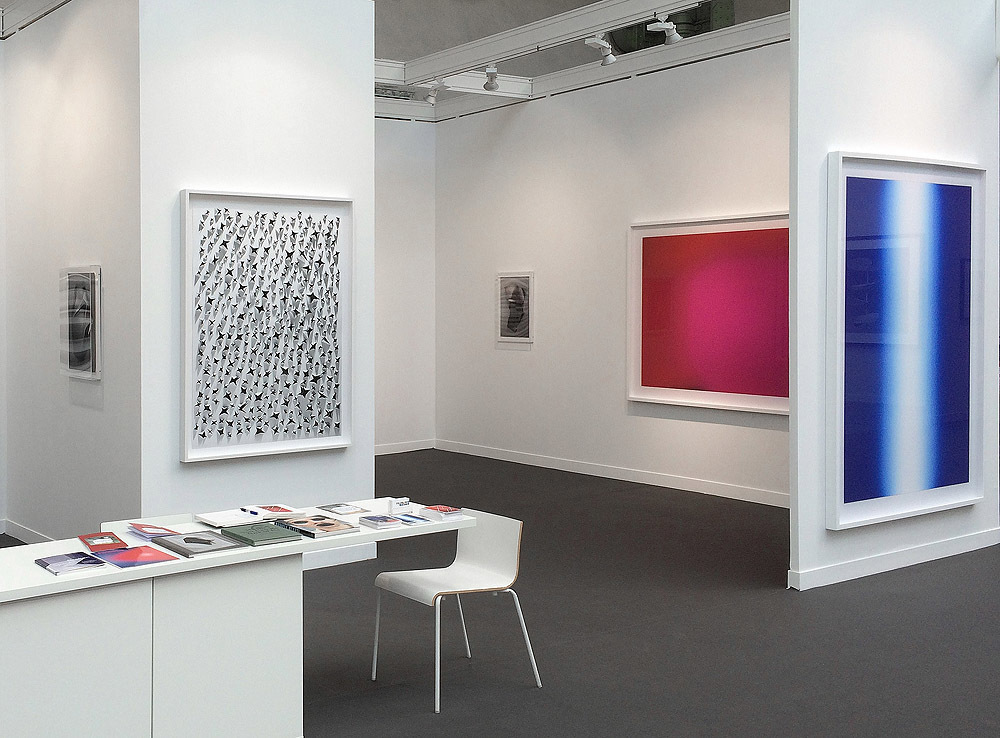 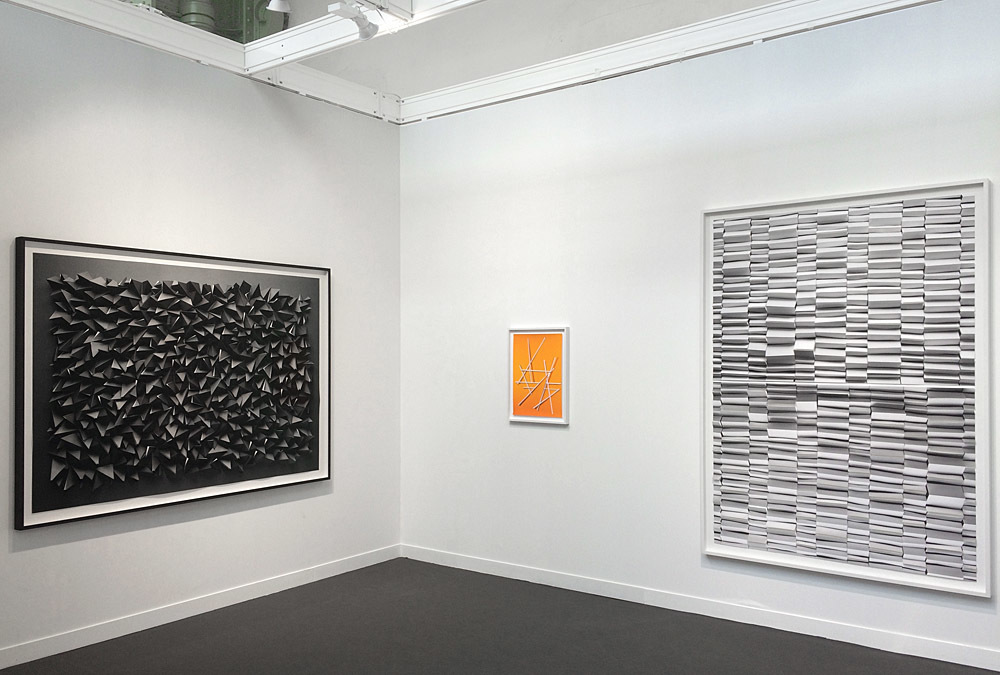 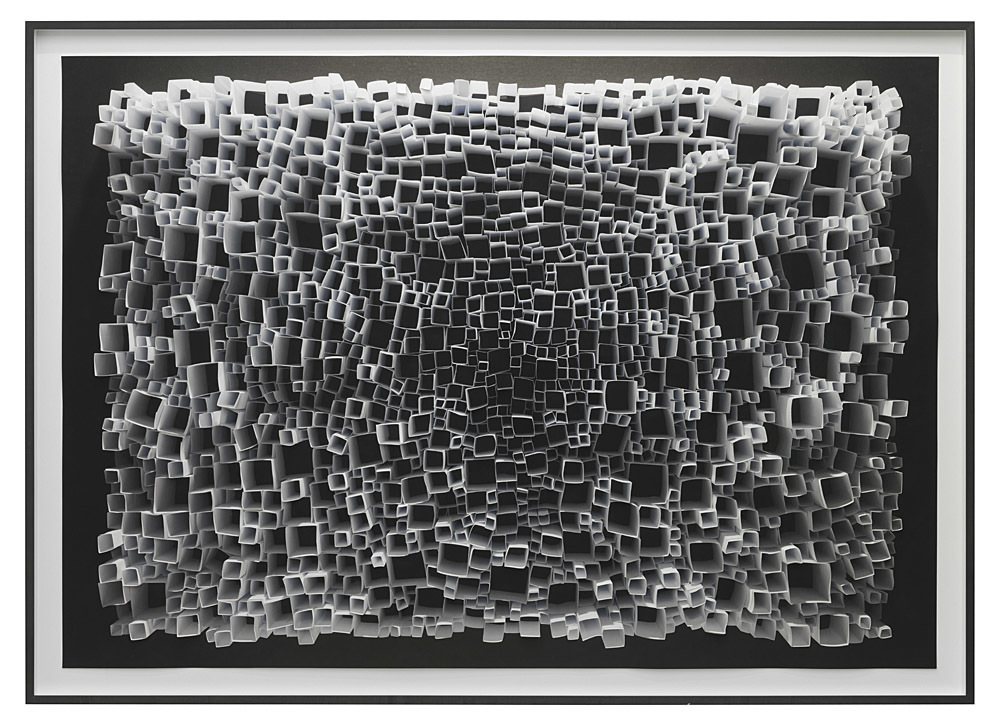 Christiane Feser's multi-dimensional object photographs create a labyrinth of space and time. The presented works consist of repetitive, polydimensional geometric structures. The detailed constructions require up to five steps to fabricate: the artist builds paper models and photographs these, then sculpts and folds the printed photographs, and photographs the structures again. The elaborate method of production is not immediately obvious in the multi-layered results, which share formal qualities with the constructivist works of El Lissitzky and Mondrian. The object photographs evoke architectonic spaces, play with light, shadow, and the viewer’s sense of what is real and illusion; the captivating works contain multiple sujets, overlayered and intertwined.
Hypnotic and immersive: Daniele Buetti's new series Flags is a story of art and perception. The inspiration for the dazzling, luminous colour prints of manipulated national flags came from Buetti's sound installation It’s all in the mind, which was exhibited in 2014 in the Rotunda of the Schirn Kunsthalle in Frankfurt and explores the interweaving of the virtual and physical experience of colour. The over-saturated colours in Flags increase the intensity of these national symbols beyond recognition. The colour progressions of the digital prints move between lyrical abstraction and colour field painting, immediately capturing the attention of the viewer.
With their unique photographic practices, both Buetti and Feser create fascinating spaces of discovery that heighten the viewers' imagination and alter their perception.
Daniele Buetti was born in 1955 in Fribourg. Since 2004, he has held the position of professor of photography at the Kunstakademie Münster. His work can be found in renowned international collections including the Daimler Art Collection in Berlin, the Maison Européene de la Photographie in Paris, the Migros Museum für Gegenwartskunst in Zurich, the Museo Nacional Centro de Arte Reina Sofia in Madrid, and the Thyssen-Bornemisza Contemporary Art Foundation in Salzburg.
In addition, his works have been exhibited all over the world in many museums and galleries, including the Museo Nacional Centro de Arte Reina Sofía in Madrid, the Haus der Kunst in Munich, Fotomuseum Winterthur, the Kunsthalle zu Kiel, the Kunstmuseum Bern, the Migros Museum für Gegenwartskunst in Zurich, the Museum der Moderne in Salzburg, and the ZKM in Karlsruhe. His solo exhibition It’s all the mind, exhibited at the Schirn Kunsthalle in Frankfurt (2014), received an outstanding response. Daniele Buetti currently lives and works in Münster and Zurich.
Christiane Feser was born in 1977 in Würzburg, Germany. She studied Visual Communication and Photography in the classes of Heiner Blum and Lewis Baltz at the Hochschule für Gestaltung in Offenbach. Her works have been presented at Reportage Photography Festival, Sydney, Australia (2013), Photoville, New York (2012), Guggenheim, New York (2012), Gwangju Biennale, South Korea (2011), and Palazzo Strozzi, Florence, Italy (2009), amongst others. Latente Konstrukte has been presented in a solo show at Mönchehaus Museum, Goslar (2013), amongst others. She recently received a scholarship for the Cité Internationale des Arts, Paris, awarded by the Hessian Ministry for Art and Science (2014). Christiane Feser lives and works in Frankfurt a. M., Germany.