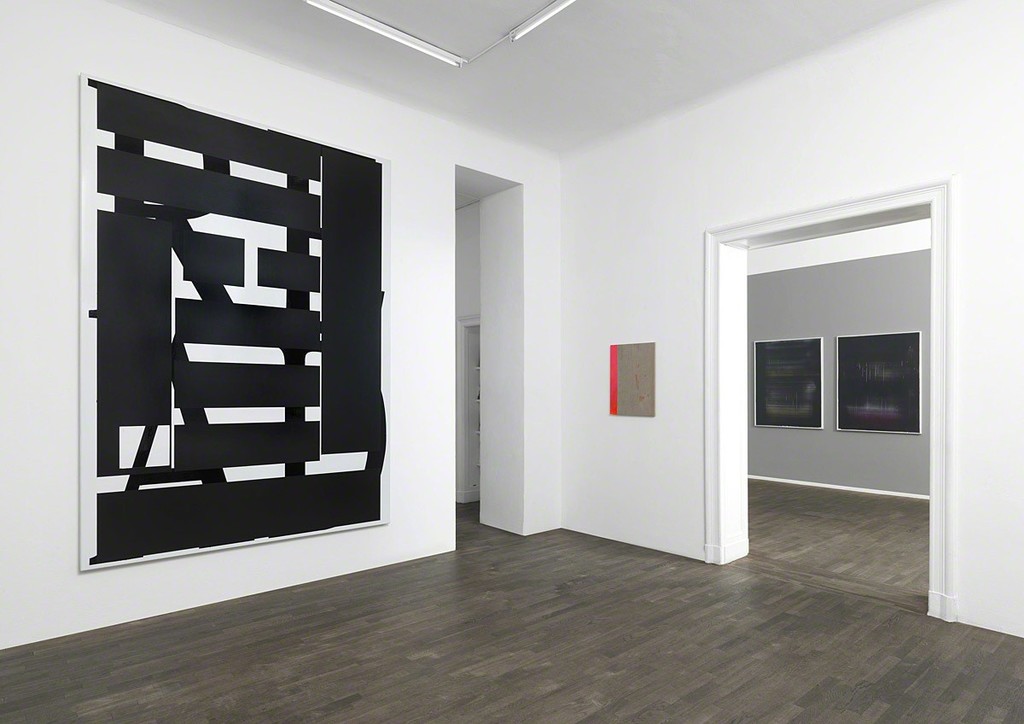 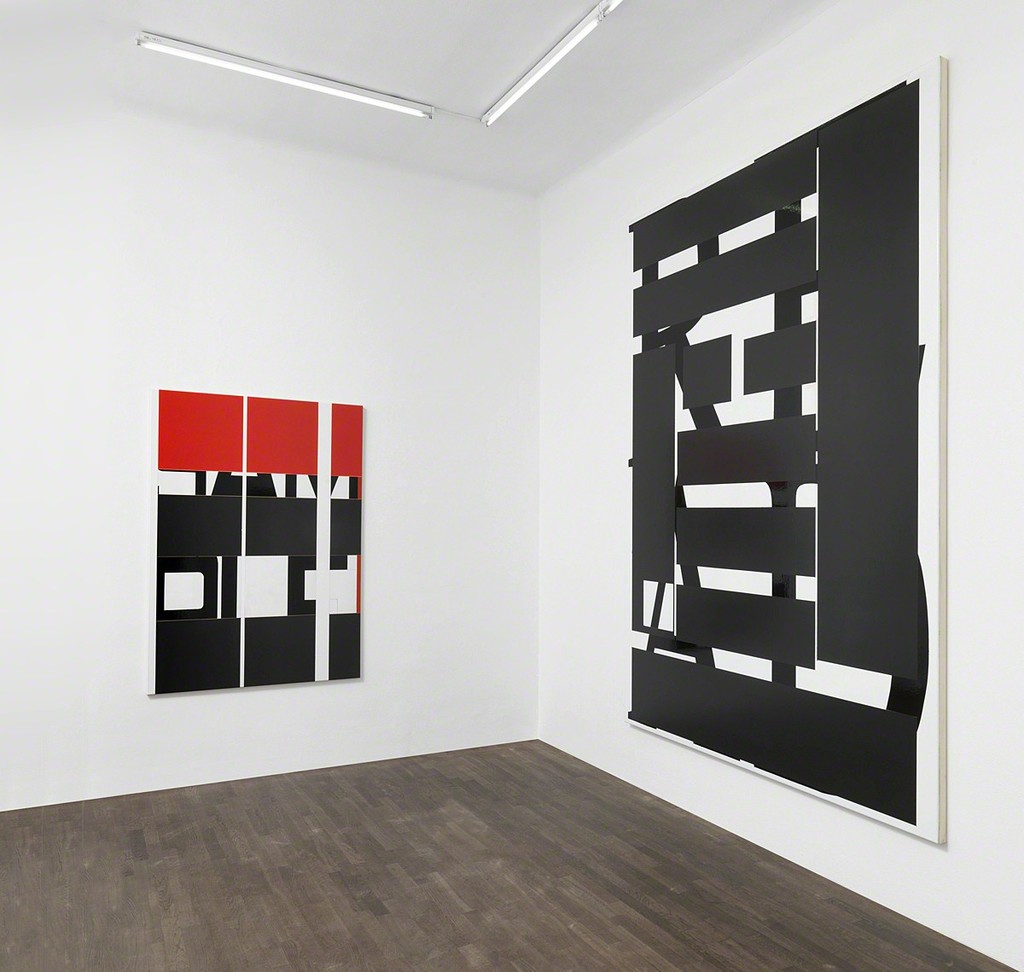 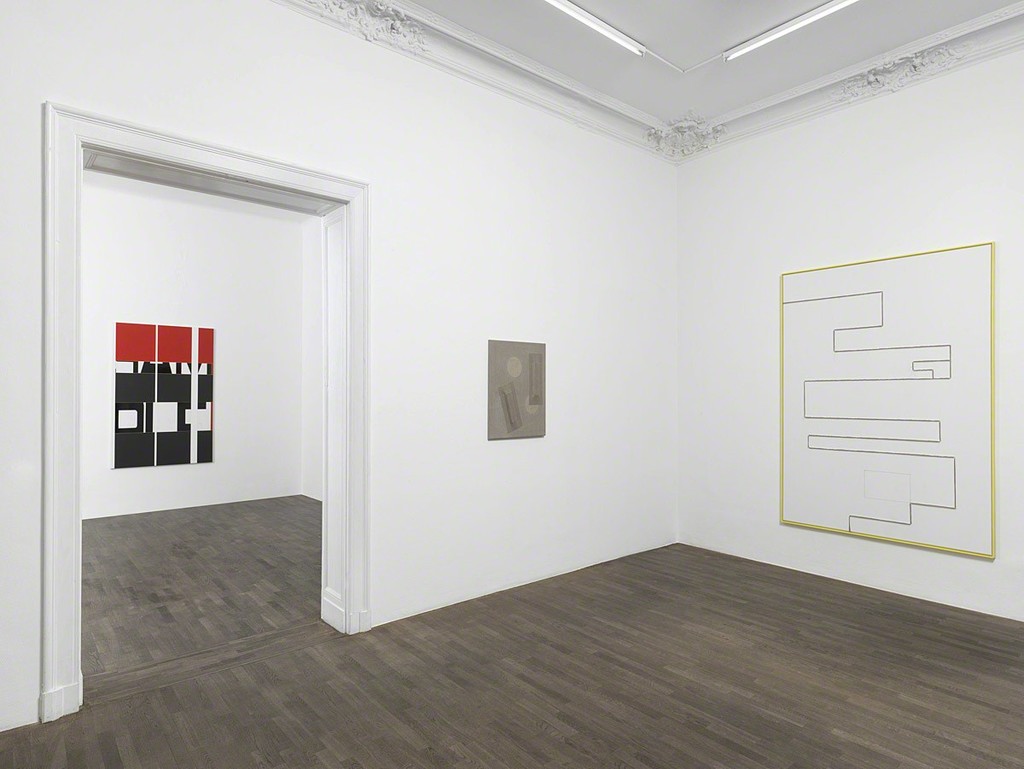 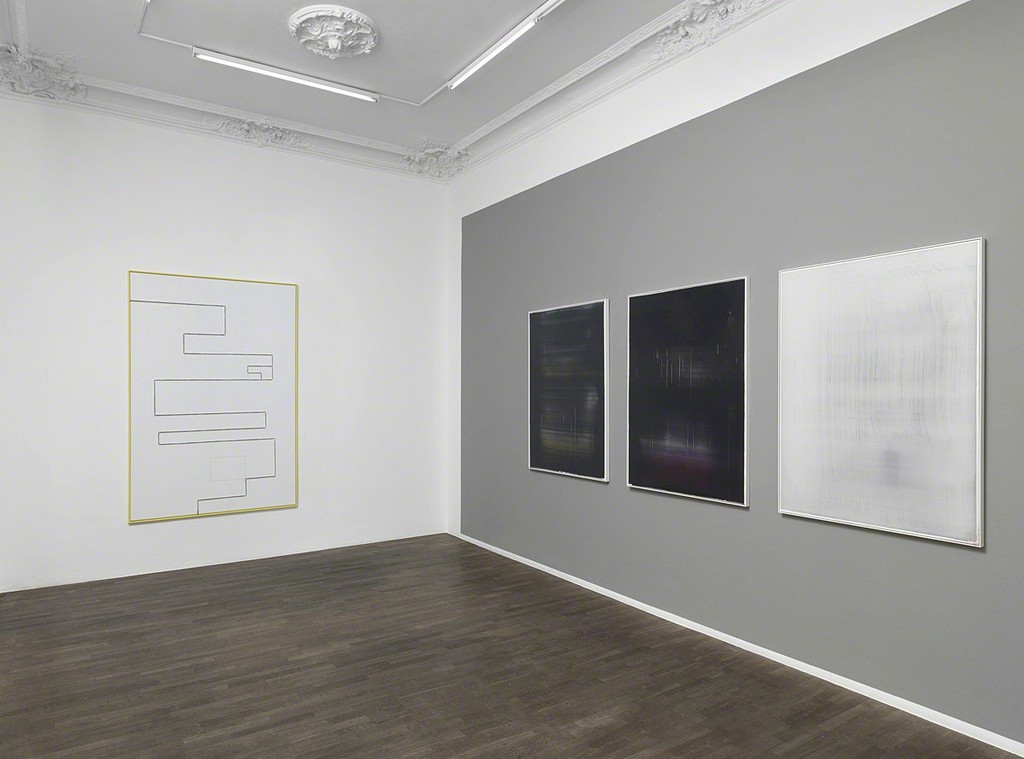 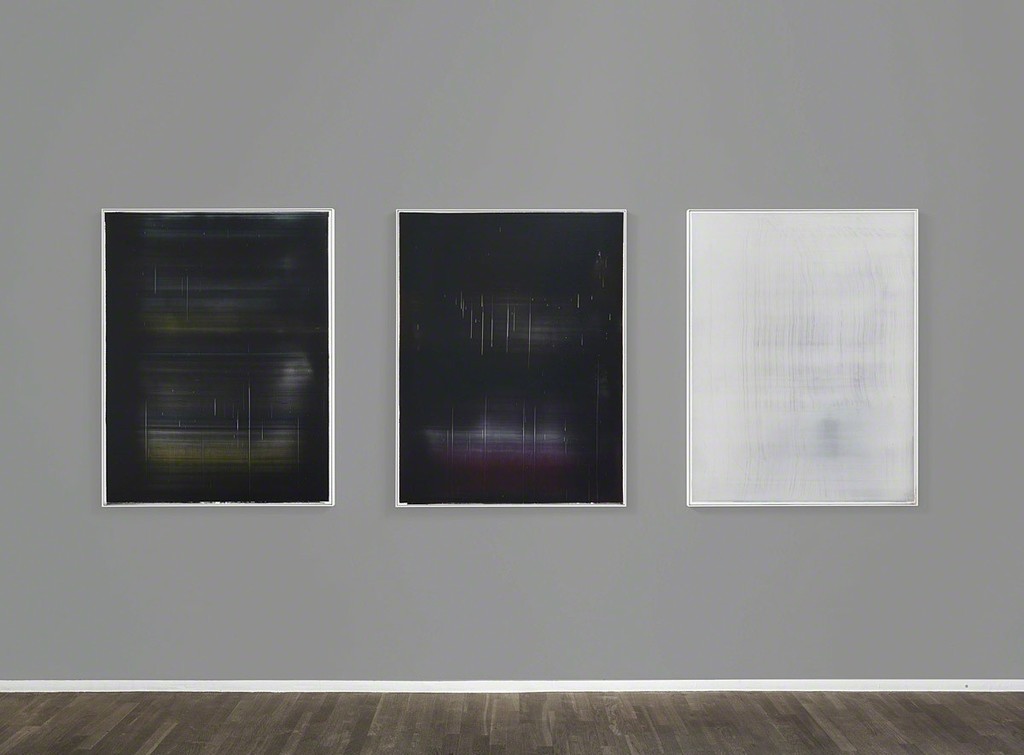 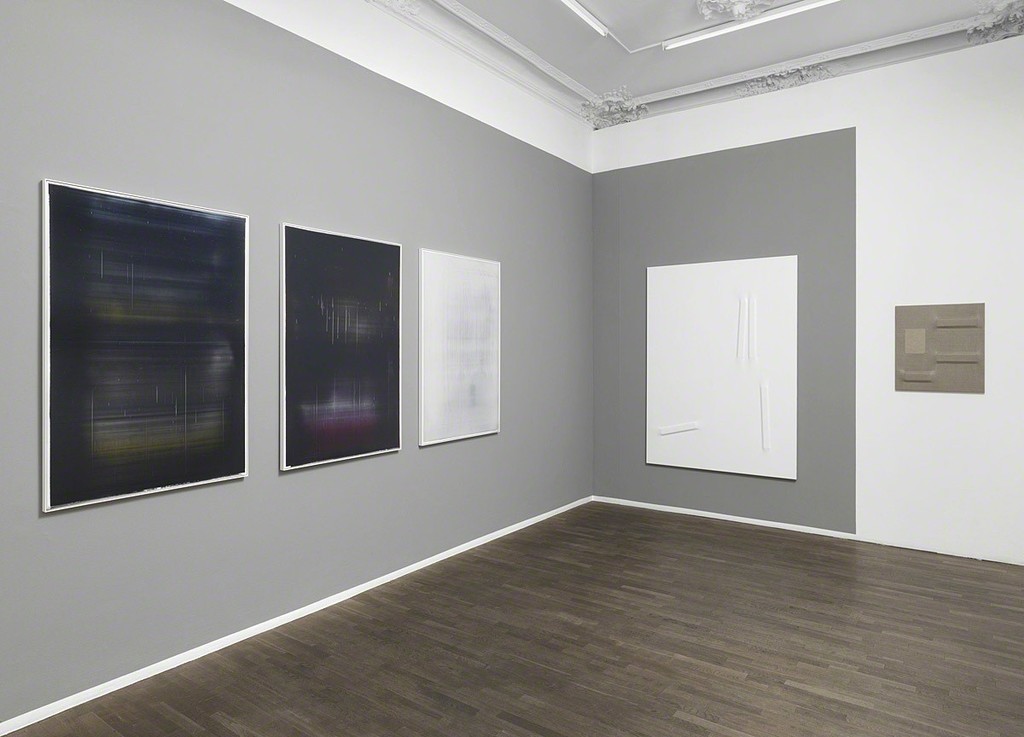 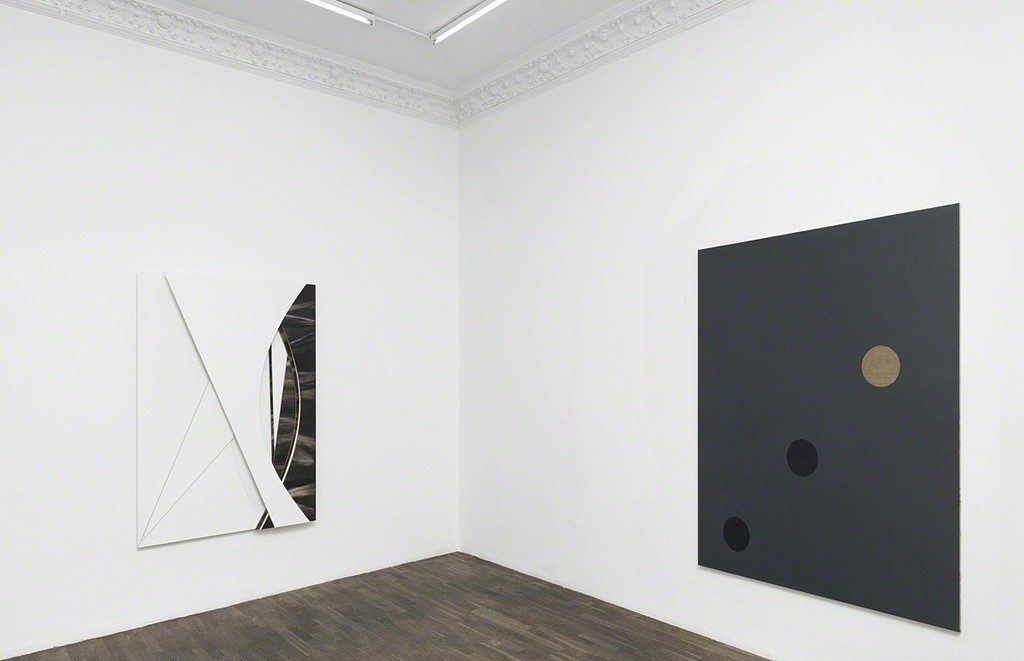 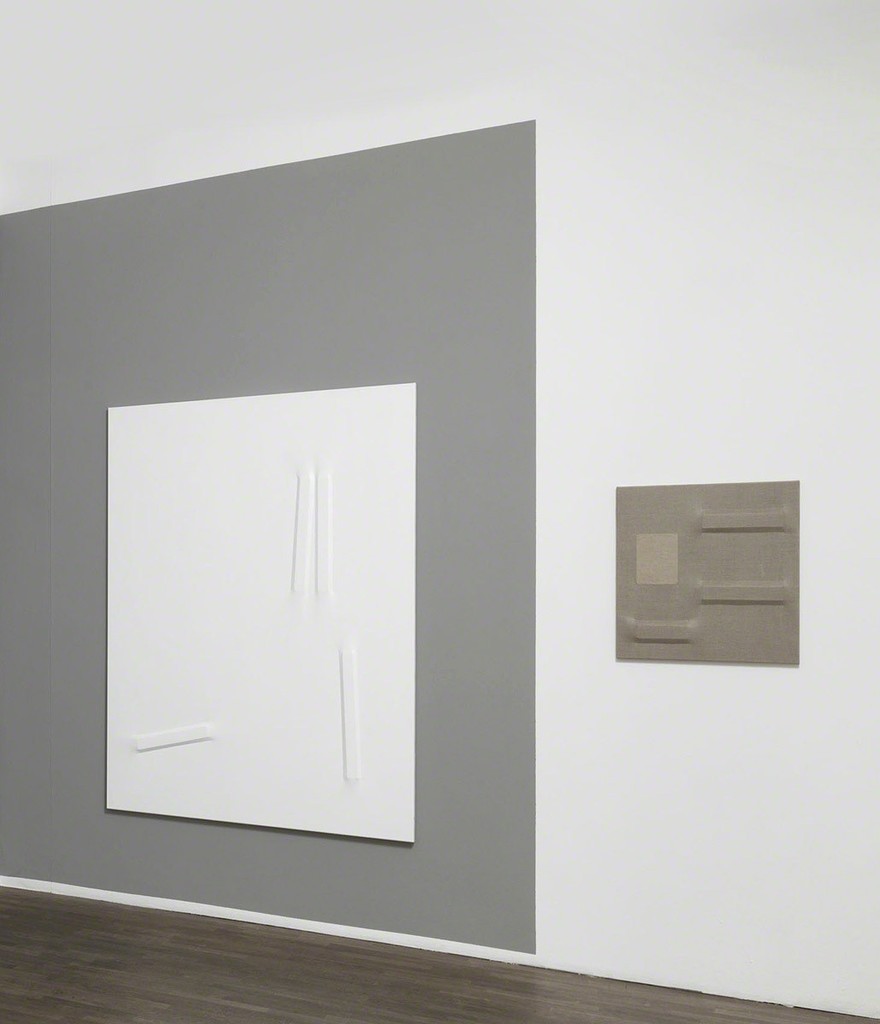 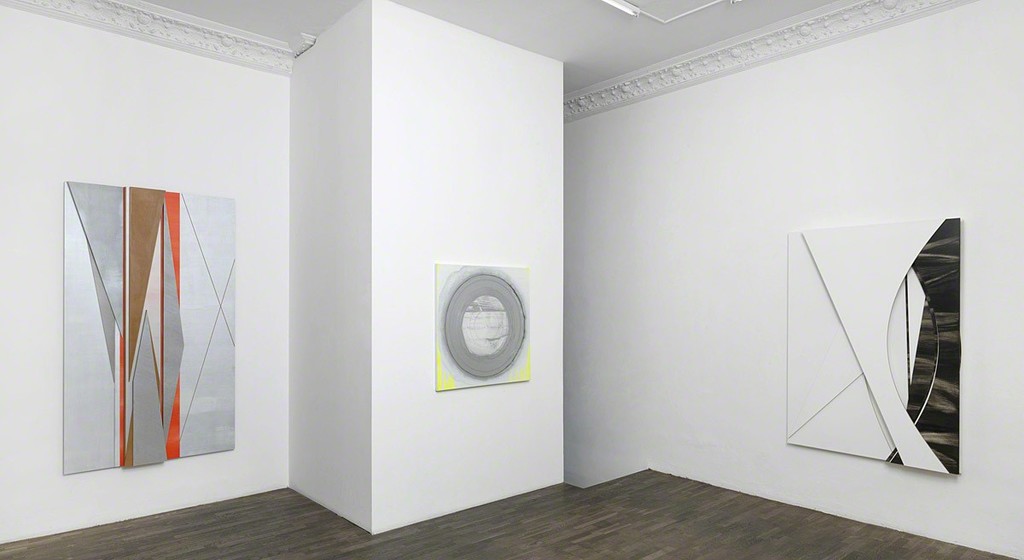 In the group show SEW, SAW, PAINT, REWRITE, FeldbuschWiesner presents the multiple facettes of contemporary abstraction at the interstice of painting, sculpture and sign. Painting originates in the impulse to leave a mark.Taking the idea of the sign as a starting point, Ronald de Bloeme is interested in the signals of the current consumerist society. Paintings are objects that circulate, too; they are mediums of passage and form part of a network – a thought of great actuality. Colour becomes a physical experience in the sculptural works of Ni- cola Stäglich, leaving the canvas and growing into the exhibition space; Sven Ole Frahm sews the canvas and creates fascinating objects that simultaneously appear organic and graphic. Leipzig based artist Benedikt Leonhardt presents hypnotic monochrome paintings originating in a figurative starting point – using multiple layers of vinyl, tape, and paint to create a unique luminosity. Ecstatic and graphic, gestural and monochrome at the same time: the presented positions form a heterogenous force field of contemporary abstract painting.

RONALD DE BLOEME
The incentive behind painting is a desire to leave one’s mark.Taking the concept of symbols as a point of departure, Dutch painter Ro ald de Bloeme devotes himself to the sign system found in our consumer society while also exploring the bounds and possibilities of language. Even paintings themselves are objects in circulation and thus a medium of passage and part of a network – a concept that possesses great social relevance. Ronald de Bloeme takes everyday commercial graphics and translates them into painting, overlaying them using the same grid pattern of varying size for each piece. With these deconstructions, he codifies the dominant language of presentday society in his own style and prompts us to reconsider our everyday perceptions; he analyses and questions the impact of visual communication, its persuasive power and its importance in our daily lives.

SVEN OLE FRAHM
Sven Ole Frahm explores and questions the fundamental proper- ties of painting and its traditional canvas support, while simulta- neously playing with the expectations of the observer.The artist un- picks the evenly woven structure of the canvas and reassembles it – mostly through cutting and sewing. It is the transformation of the material itself that lies at the core of his artistic interest, expertly replacing the painterly gesture.The marks created by the needle and thread are subtle and yet crucial for the works’ formal organi- sation and potency: the result is a collection of dynamic works that lie somewhere between painting and object, producing a simulta- neously organic and minimal effect.

BENEDIKT LEONHARDT
In his paintings, Benedikt Leonhardt takes figurative stimuli and overlays them with multilayered compositions of lines and trans- lucent colour. His materials range from oil, acrylic and vinyl paints to pencils, crayons and even adhesive tape and acrylic filler.The works are shaped by the painting process and arbitrary developments, and possess a characteristic openness.They are reminiscent in form to Rothko’s and Barnett Newman’s hypnotic colour fields, Ryman’s monochrome paintings, and the neoplasticism of Piet Mondrian, yet they produce a singular strength that is entirely their own.The cha- racteristic framing of the pieces brings the concrete materiality and illuminating effect of colour and surface directly to the foreground, while the original idea – an image that is increasingly altered and sublimated through the process of creation – lays shimmering be- neath. Thus, the experimental process of painting itself becomes the subject

Benedikt Leonhardt studied with Astrid Klein at HGB Leipzig from 2007-2014 and is currently a Master’s student in her class. In 2012, he stayed at Bergen Academy of Art and Design in Norway. Since 2009, he has been a fellowship holder of the Cusanuswerk. His works have been presented in first group shows; for instance at Upon Paper Space, Berlin (2013), Kunsthalle of Sparkasse Leipzig (2013), BKS Garage, Copenhagen, Denmark (2012) and Centre d ́art passerelle, Brest, France (2012). The artist lives and works in Leipzig.

NICOLA STÄGLICH
Berlin artist Nicola Stäglich produces sculptural paintings that ren- der colour threedimensional, enabling it to be experienced spatially. Her picture support and primary material are MDF panels, which she deconstructs geometrically, saws up, and then reassembles. Sur- face texture, light and shadow modulate her reliefs and sculptures, whose form is made up of ellipses, circles and triangles.The artist applies the paint in thin washes and transparent layers that com- bine with the materiality of the wood to produce an effect hover- ing between solidity and dissolution.The artist’s work expands the pictorial space into the real space, causing it to be reshaped and rechoreographed.

Nicola Stäglich (*1970,Oldenburg) received her Master in FineArts from the Chelsea College of Ar t and Design in London (1998). She was awarded with numerous awards, teaching assignments and re- sidencies among them: Scholarship of Akademie der Künste (2004), guest lecturer at Art Center College of Design, Pasadena (2005- 2006). She was also appointed to a professorship for Painting/Gra- phic Art at HBK Essen (2015). Her works have been exhibited in solo exhibitions at Lisa Norris Galerie, London (2015), Kunstverein Schwäbisch Hall (2014), Stadtmuseum Oldenburg (2014), Kunst- verein Duisburg (2012), und Contemporary Art Projects, Sydney (2012). Among her group exhibitions in Germany and abroad are 100 Painters ofTomorrow, One Art Space, NewYork (2014), Farbe Raum Farbe, Georg-Kolbe Museum, Berlin (2013) and her presen- tation at Kunstmuseum Kunstpalast Düsseldorf (2013).The artist lives and works in Berlin.