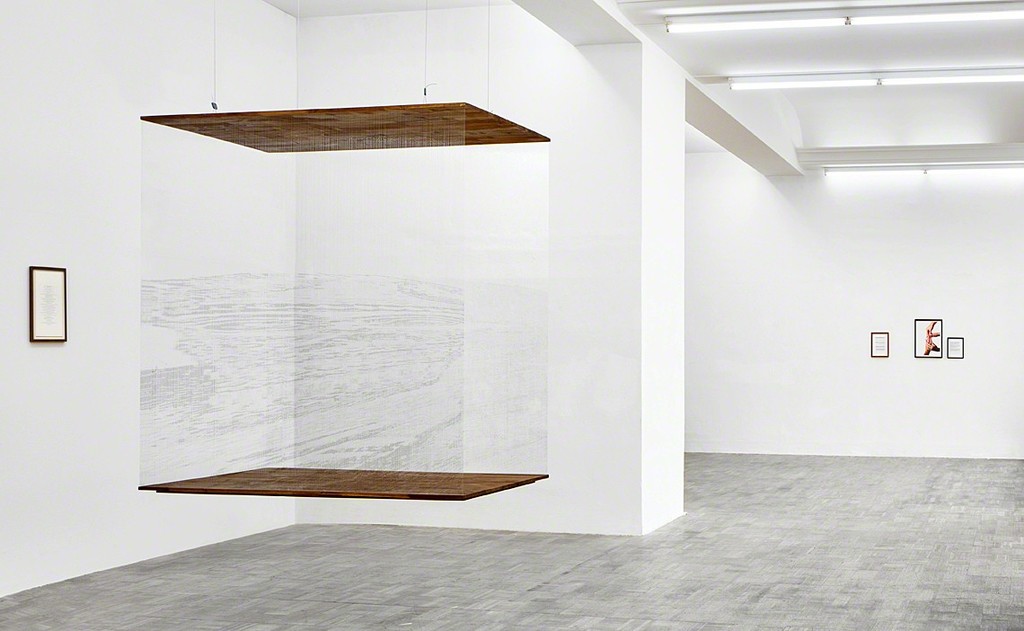 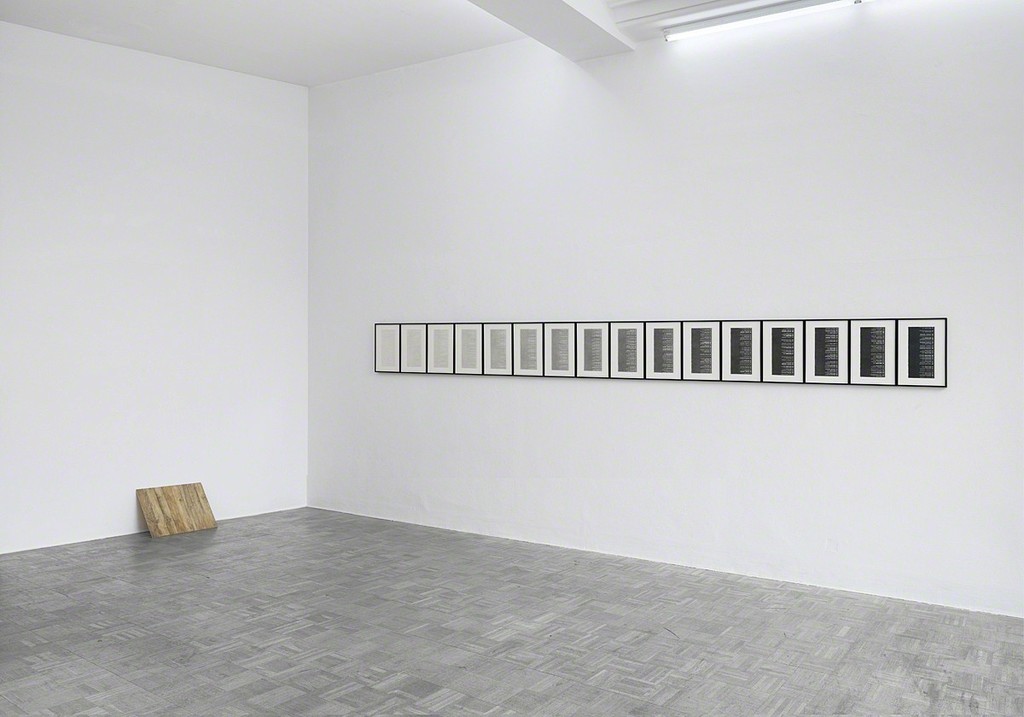 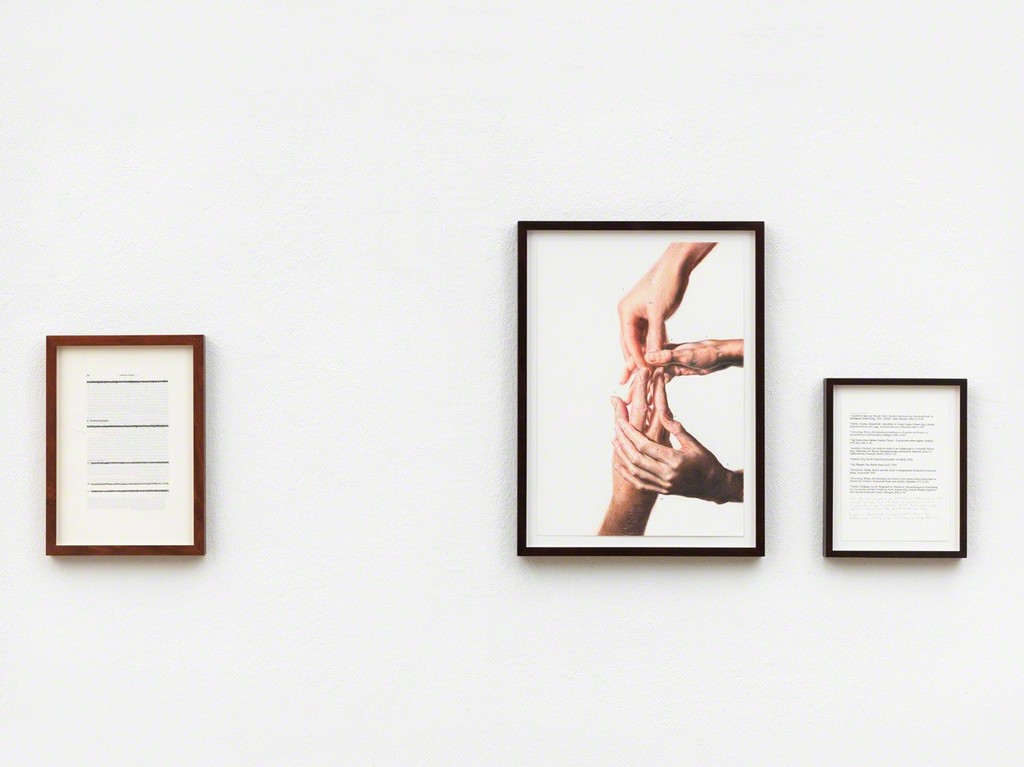 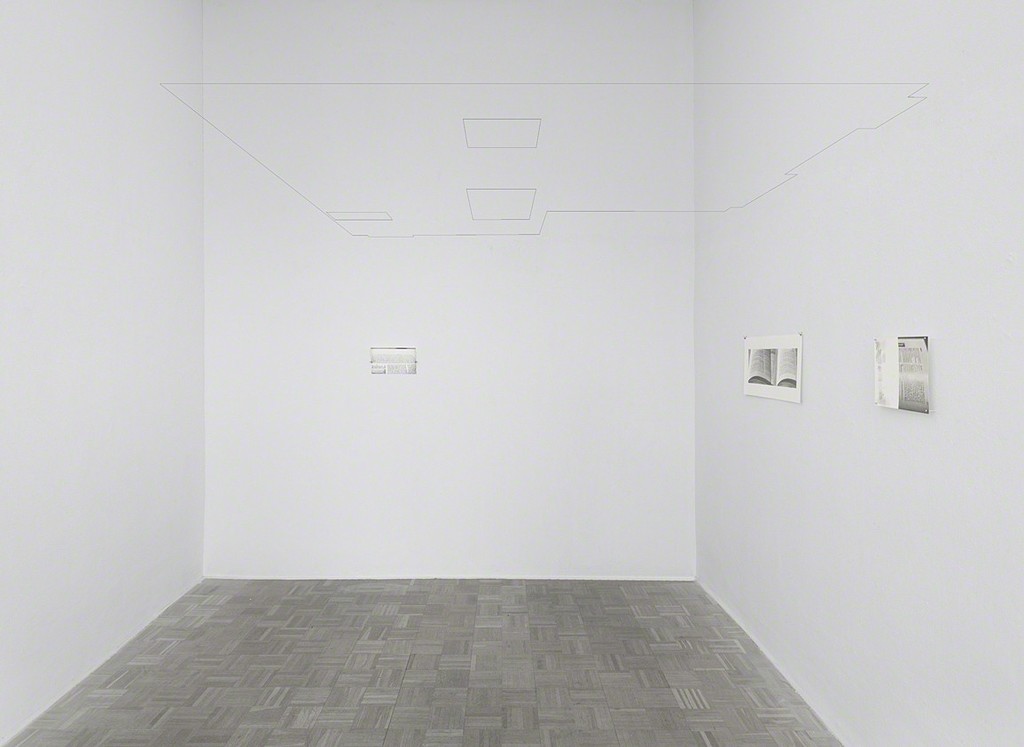 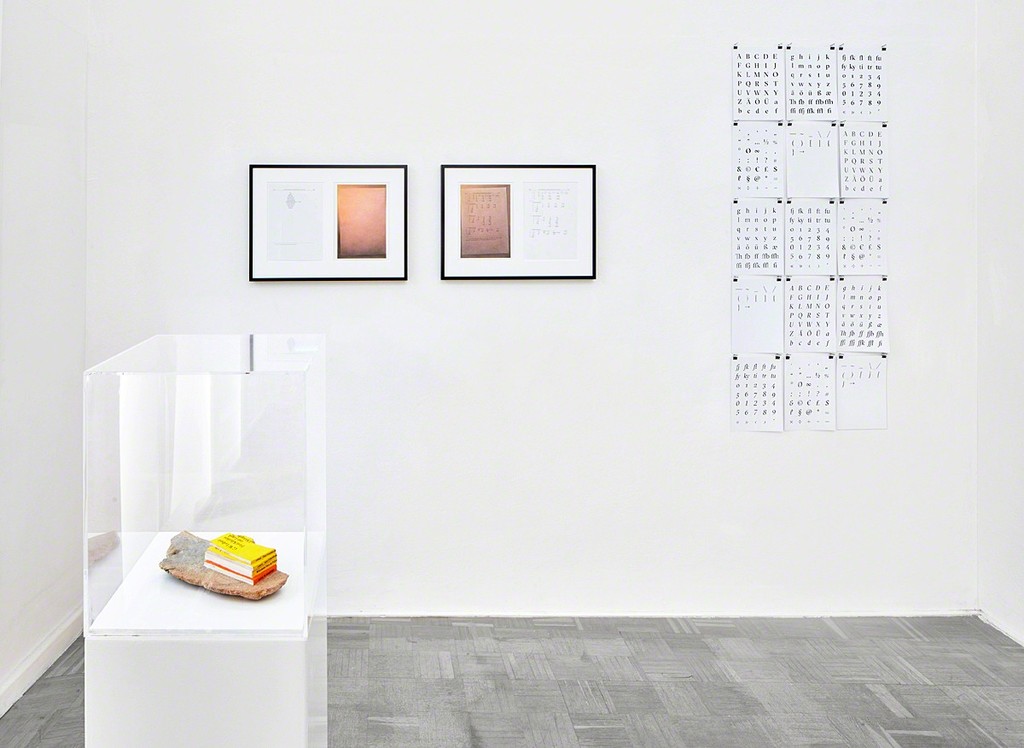 The exhibition “Der unsichtbare Setzer” (“The Invisible Typesetter”) by Philip Loersch (born in 1980 in Aachen; lives and works in Berlin and Seebüll) presents new works by the artist featuring drawings on paper, artifacts placed on stone and thread installations in space. Visitors and viewers encounter drawings of mimetic representations such as a large-scale drawing of a snowy forest that only minimally differentiates between light and dark, lines and branches, and thus explores the limits of (object-based) literacy in the medium of drawing. Alternatively, they come upon two- and multi-part works showing minutely elaborated textual drawings that present lists of chapter headings for philosophical treatises on music and logic or “text movements.” Viewers then try to read or view the way in which the artist produced these lines that straddle the boundary between outline and writing.

The current show is Philip Loersch’s fourth solo exhibition at the Jette Rudolph Gallery. It builds on the impressive duo exhibition “PHILIP LOERSCH - HANNE DARBOVEN” presented earlier at poolhaus-blankenese (June-September 2015). As a result, the Jette Rudolph Gallery and the poolhaus will publish an exhibition catalog to be presented at Gallery Weekend Berlin. At the same time, the Hamburger Kunsthalle will open the thematic group show “Zeichnungsräume” (“Drawing Spaces”) with works from its permanent collection, including art by Philip Loersch, Hanne Darboven, Marcel van Eden, and others.

As part of his Berlin exhibition, Philip Loersch presents the line as an essential means of expression in the medium of drawing and then places it into a special context, that is, he has the line engage in dialogue with the image, text and number. In his medial quest for clues shedding light on their relations between reality and illusion, Loersch often treads two parallel paths at the same time: One path explores the link between hand and writing or hand and drawing as a performative act. As such, there is a “use of language/image,” which “in the process of writing and signifying” (conceptually) “manipulates” its written/pictured objects (Horst Wenzel). The other path explores the phenomenon of the “operative pictorial quality of writing” (Sybille Krämer). According to this tangent, writing is not simply the medial transfer of linguistic discursivity into a graphic-visual dimension, but, as text (even though writing is usually characterized by the one-dimensional sequencing of letters), it also has the special status of asserting a two-dimensional order on the (pictorial) surface.

The hand or, more precisely, four hands acting in concert, are the subject of a seemingly mimetic drawing by Philip Loersch. The hands are meticulously surrounded by a script depicting small footnotes numbered 1-12 and the word “sic!” that appears just shy of the center at the upper part of the picture. In Philip Loersch’s picture, the hand is the carrier of a symbolic transfer of power caught between practical manipulation and pure visuality. As such, the linearity of writing does indeed escort or shadow the physical image, but these two are by no means congruent when it comes to their significance. Because, on the level of their visual presentation on the drawing sheet, picture and number appear together, while their companion text is presented by itself on a separate “footnote” sheet. However, by taking the identical motif of the number and thereby reconnecting the textual footnote to the image of the hands, and by citing names such as “Tim,” “Sandra,” “Jörg", and by individualizing the footnote text by presenting some of the footnotes in someone’s personal handwriting, Loersch energizes the information presented in the footnote text, inviting viewers to synthetically re-construct the image and text by means of individual, associative “manipulation,” or through possessive “appropriation.”

The artist Philip Loersch pursues a similar interest in his motif-based drawings of dense patterns (textiles, fur texture, etc.), intertwined forest tree branches, and in optical phenomena such as out-of-focus or overexposed photos, as well as in his various text drawings, including the meticulously highlighted encyclopedia articles and philosophical treatises on the relationship between text/image, all the way up to the mirror images of lines of text that appear on the verso of a piece of paper when held up against the light, or in overlapping lines of text that block readability: Loersch’s art is about the difference between drawing as a pictorial medium, on the one hand, and writing as a notational medium, on the other.

By elaborately constituting the text he cites as a drawing, the artist opens the option for writing to claim its so-called linear one-dimensional quality on the two-dimensional surface (of paper). Through operative manipulation, the artist thus transfers the line and writing in such a way as to have them appear as two-dimensional orders in space. In fact, the picture operates mostly based on the concept of a “dense or opaque spatial constellation,” while the writing operates based on an “intermediate spatiality,” that is, it includes gaps, intervals and empty spaces (cf. Sybille Krämer). Citing a scholarly article by Gernot Grube on linearity as a textual organizational principle, Loersch felt challenged to performatively implement the description of “text movements” mentioned in the article: Such a staging resulted in the overlapping of multi-track lines of text that are illegible for the viewer. Interspersed with the illegible text crowding the picture are allegedly empty spaces that give viewers a visual impression of the text on the paper’s verso. Here Loersch is searching for an “ideography” (Sybille Krämer) concerning the interstices/spaces between the words and letters, on the one hand, and the outlines or structures/hatchings in the picture, on the other, since these are precisely what make the picture’s and text’s content visible. This is how Loersch presents viewers with the notion that letters and text are perceived as concrete and individually distinct structures, but that by their refusal to perceive them as such, the special quality that characterizes drawing becomes visible – namely that the line/the stroke in the drawing is always part of a whole.

Without a doubt, the treatise on (or manipulation of) image and text that Loersch initiates and presents on sometimes separate sheets of drawing paper will provoke viewers into opting for a non-linear reception. The eye and mind jump back and forth between the meanings of image-number-writing and thereby practice the constant act of remembering and renewing their knowledge.