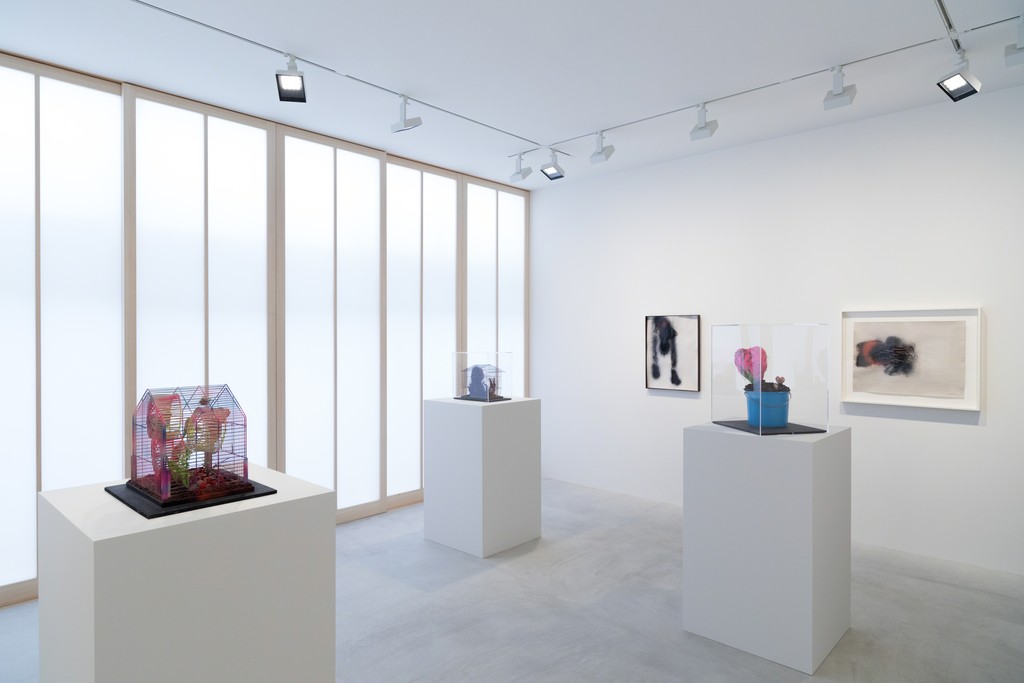 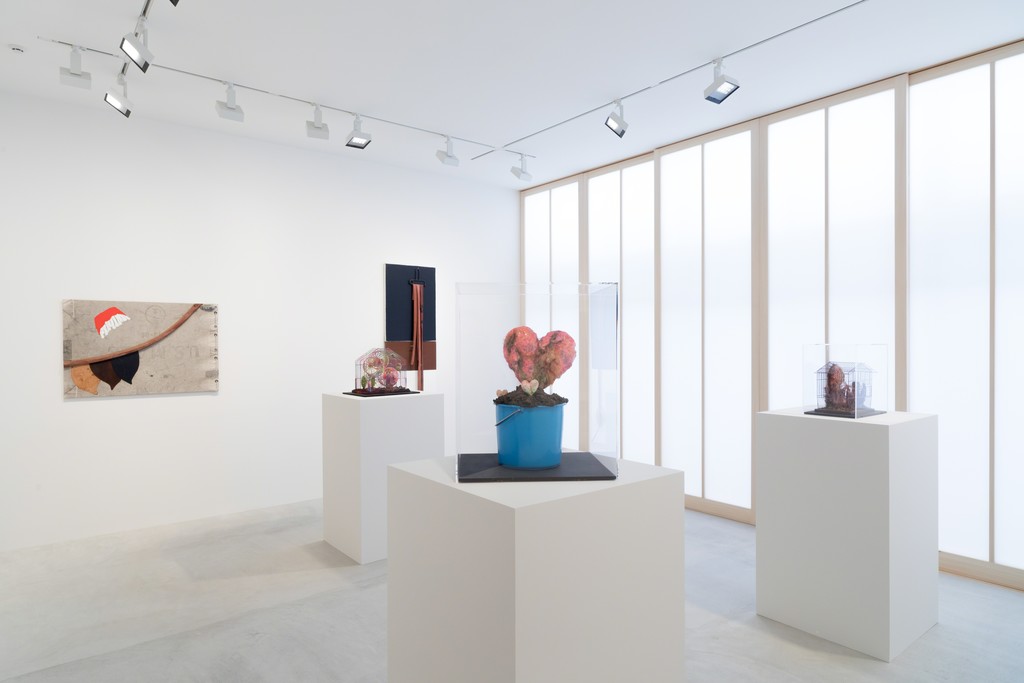 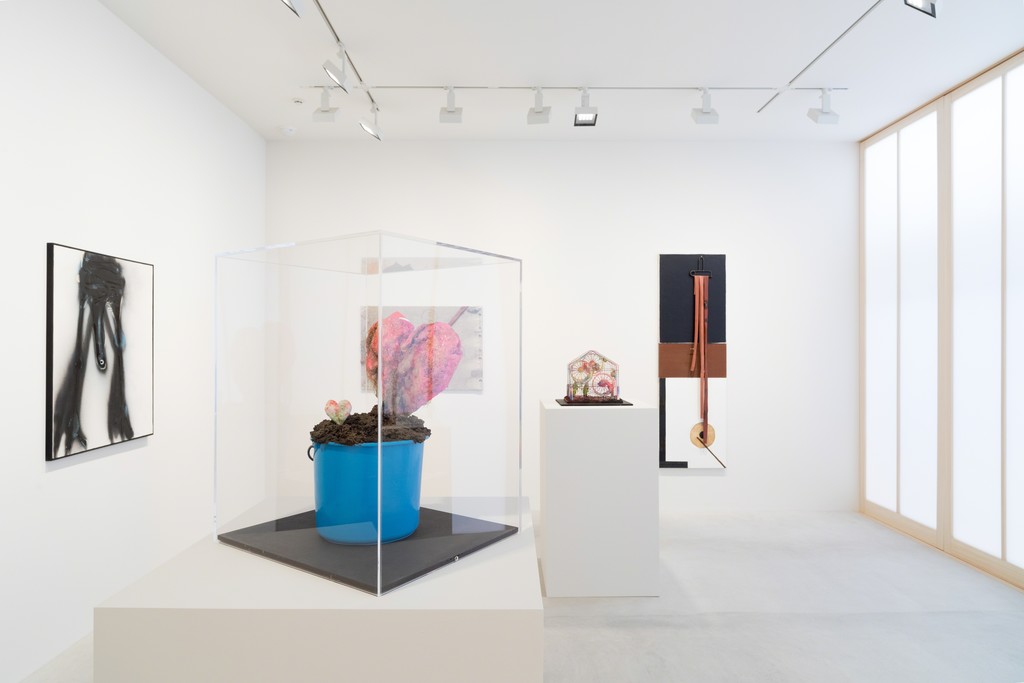 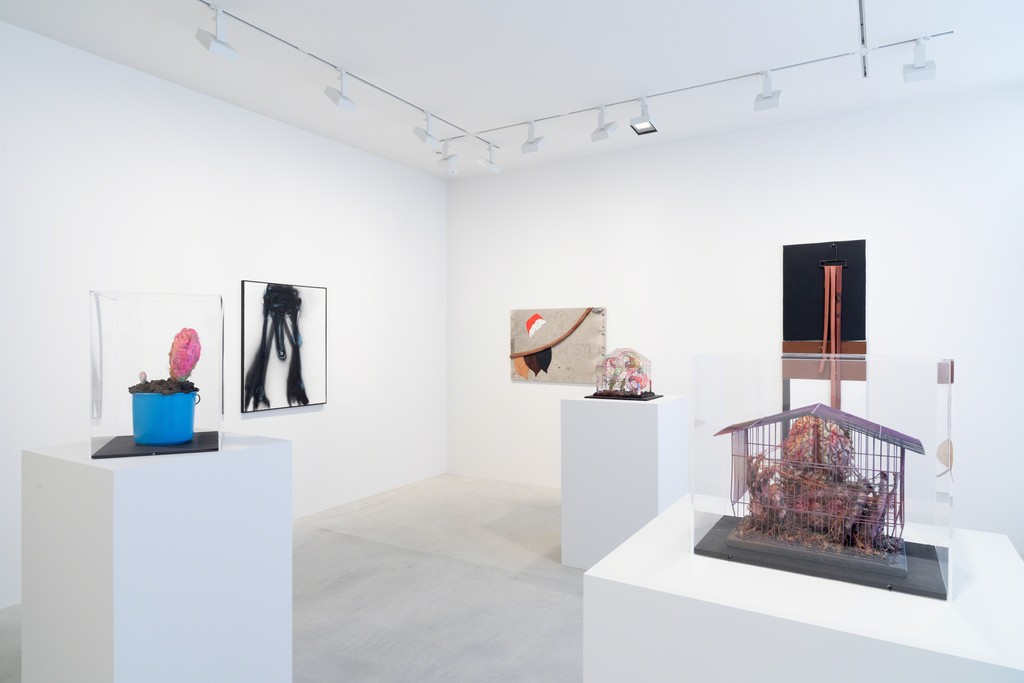 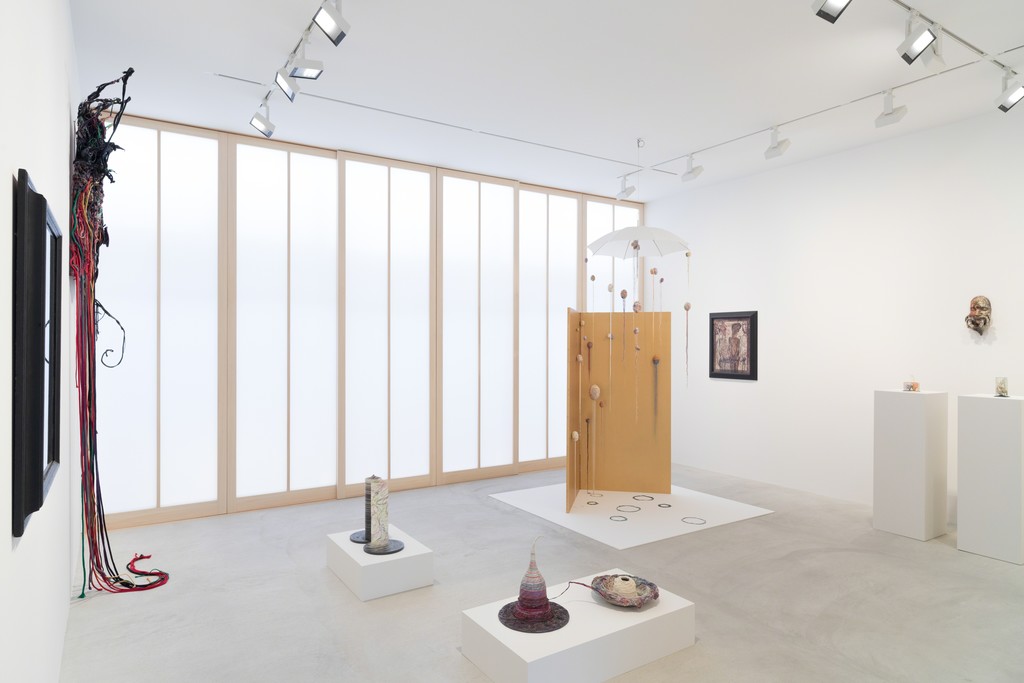 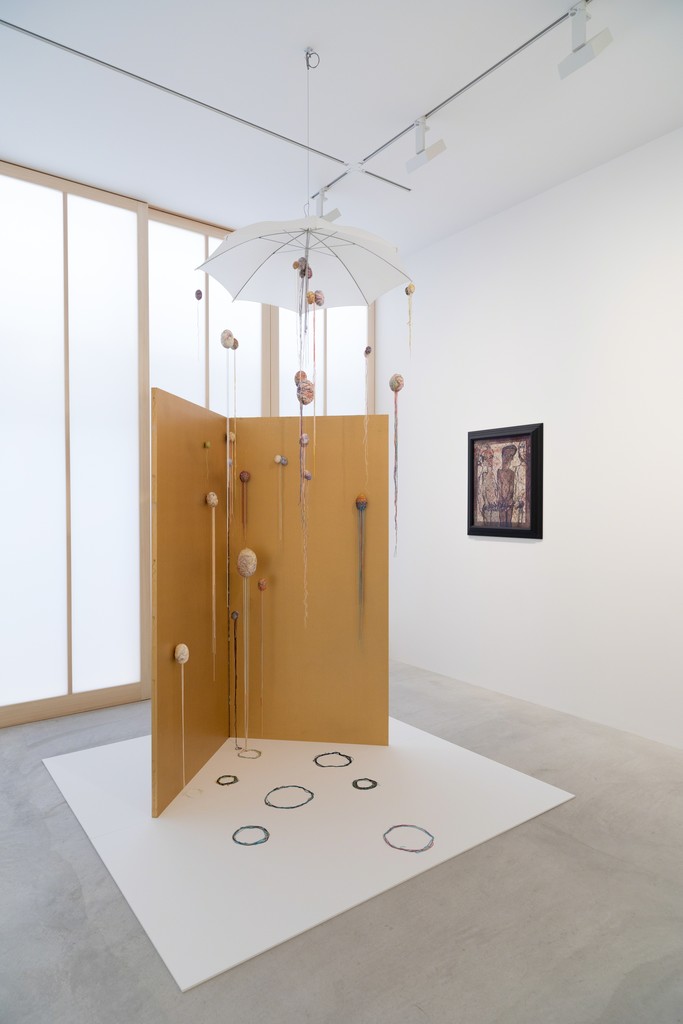 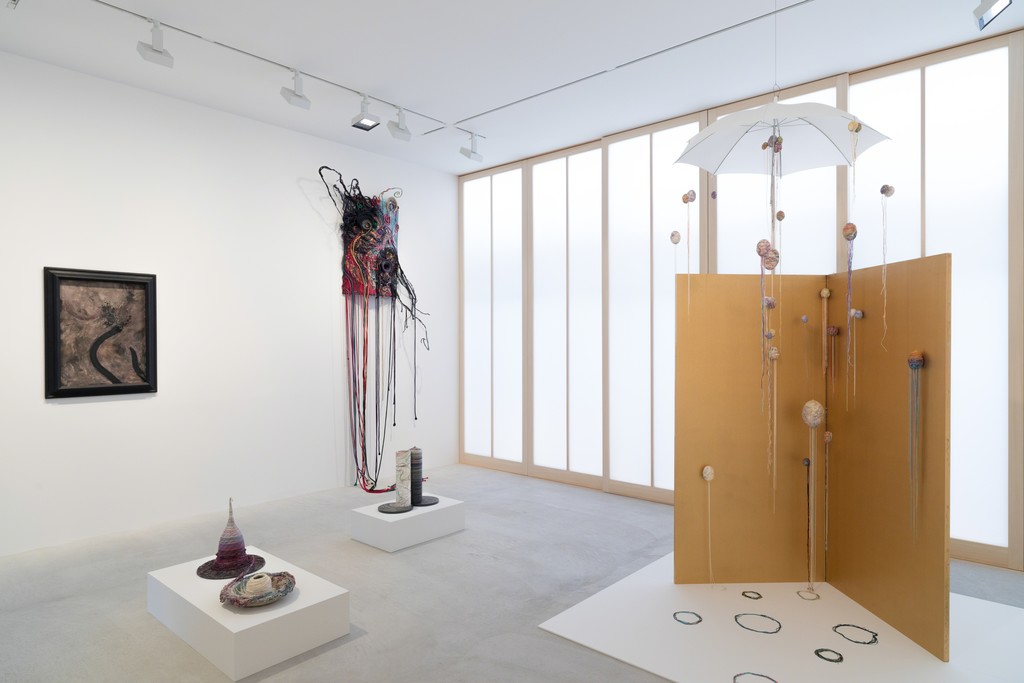 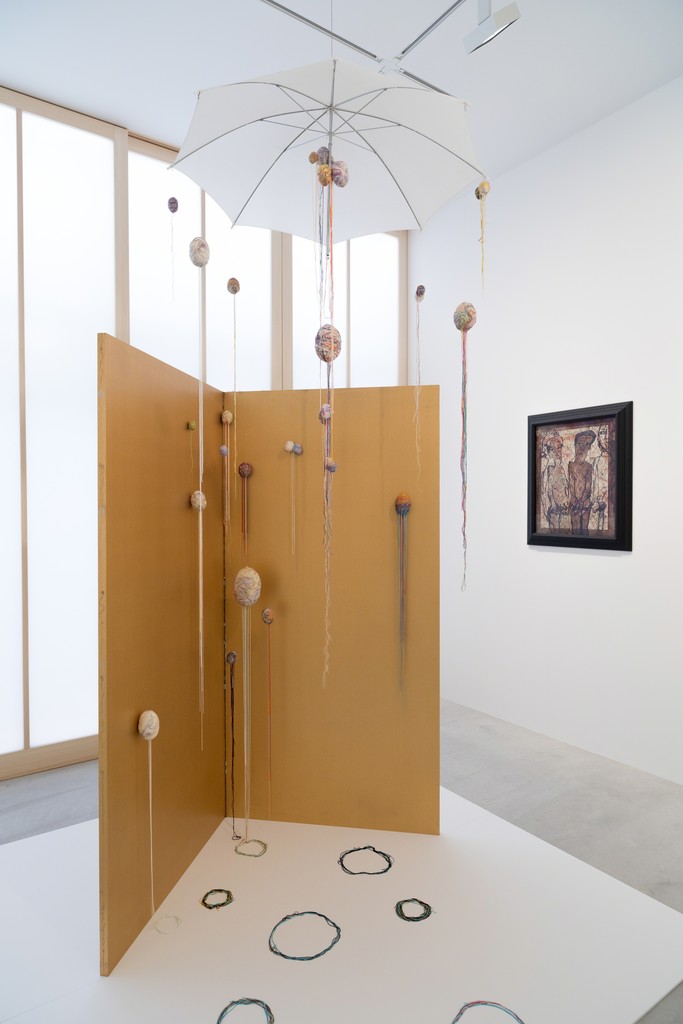 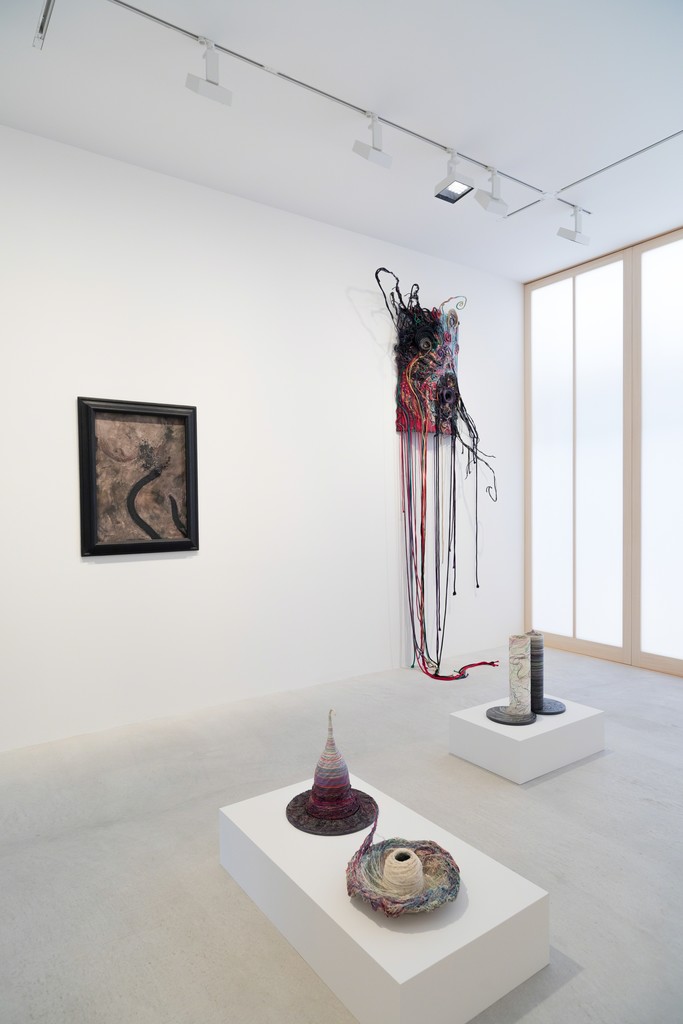 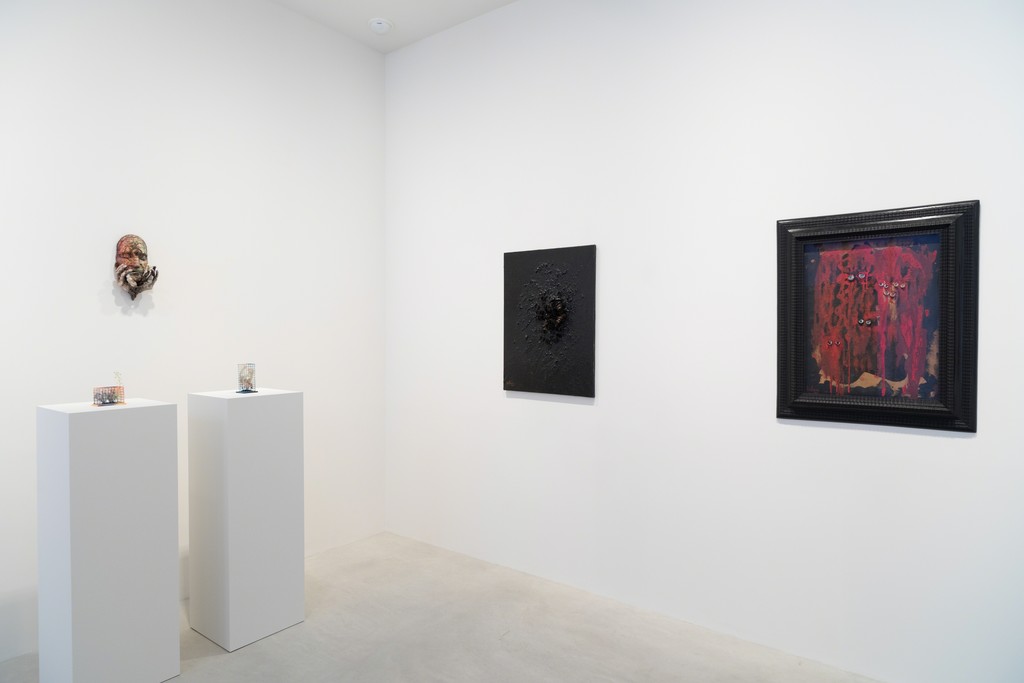 Fergus McCaffrey is pleased to bring together the innovative and challenging biomorphic sculptures of Japanese artist Tetsumi Kudo (1935–1990) with the psychosexual assemblages, paintings, and drawings of self-taught Italian artist Carol Rama (1918–2015). Kudo / Rama will be on view at Fergus McCaffrey’s Tokyo gallery from June 26 – August 4, 2018.

Featuring a selection of twenty-five works spanning from 1962 to 2000, this exhibition explores the visionary insights offered in both artists’ practices; featuring prescient works that diagnose the most urgent interpersonal, societal, and ecological traumas of our time.

Juxtaposed, the affinities between Kudo’s and Rama’s radical sensibilities and subversive approaches to material are apparent; both artists used a wide array of found objects in uncanny combinations to explore the bodily and psychological, proposing possibilities for a post-human aesthetic. The concerns that occupied both Kudo and Rama throughout their careers remain relevant as among the most urgent issues facing contemporary society—materialism, sexuality, violence, and the effects of consumerism—however, neither artist made overtly political or moralizing artworks, instead they presented inventive and personal interpretations of what it meant to be alive. For this reason, both Kudo and Rama have proven influential for many contemporary artists, gathering cult followings and drawing renewed interest in recent years.

Both were eccentric and enigmatic artists who bridged the disparate artistic tendencies of the twentieth century, evading easy categorization by remaining staunchly committed to their individual visions. Though both were concerned with specific conditions of gender, sexuality, and ecology, their insights are universal, exploring the archetypal, the psychological, and the embodied.

Tetsumi Kudo was born in Osaka in 1935 and emerged into prominence from the radical Tokyo art scene in the wake of the Second World War. Although he was first associated with the “anti-art” avant-garde of the 1950s, he would go on to break with all traditions, becoming one of the most innovative artists of his time.

Kudo traveled to Paris in 1962 and became involved in the Happenings movement through critic Jean-Jacques Lebel and artist Allan Kaprow. Over the course of his four-decade practice, Kudo developed a markedly post-humanist “new ecology,” using household materials and found objects to create sculptures that meld synthetic and biological forms in a miasma of materiality.

Though his materials and forms are often explicitly sexual, Kudo’s intention was not to comment on human eroticism; his sculptures can be considered “post-sexual,” with the artist trying to “find the ground zero of sex, the ground zero of culture.” This search led him to an investigation of materiality, nature and naturalism. His post-atomic conception of the body, in which melted skin, disembodied hands, eyeballs, and spilled innards evince nature’s continual processes of metamorphosis. Kudo’s ecological works are violently unnatural—terrariums and greenhouses in which body parts are fused with organic elements, electrical circuitry, and consumerist goods in futuristic nuclear landscapes. These grotesque and otherworldly works are radical forerunners to environmental artworks today, exploring issues of pollution, utopia and dystopia, and post-humanism.

Kudo’s work was the subject of a retrospective at the Walker Art Center in 2008, Tetsumi Kudo: Garden of Metamorphosis, and at the National Museum of Art, Osaka, in 2013.

Carol Rama, was born in Turin, Italy in 1918. Her seven-decade career spans media, incorporating watercolor, prosthetic eyes, used rubber bicycle tyres, taxidermied animals, bear claws and teeth to explore the body, sexuality, and desire. For decades, her psychosexual paintings, drawings and evocative assemblage-style abstractions went largely unnoticed by the art world. Her work has only recently received acclaim; Rama was awarded the Golden Lion at the 2003 Venice Biennale, and her work was the subject of retrospectives at the Musée d’Art Moderne, Paris in 2015 and the New Museum, New York in 2017.

Rama’s work has long been considered subversive for her treatments of eroticism, repression, madness, and liberation: her first renderings of sexually explicit couplings, images of the electro shock treatment of the insane, and acts of beastiality in the 1930s and 1940s were censored by Italy’s wartime Fascist regime. These works represent an explosion of female sexual defiance in the face of confinement and oppression.

Rama’s Bricolage paintings of the 1960s embrace the abject and uncanny. Animal pelts simultaneously attract and repel, while in other cases syringes and dolls eyes are attached to the surface of works to threaten and peer at the viewer. However, as Rama resolutely mined the tortured mental and physical life of her family, she attains a level of universal consciousness as her materials came alive. Her works of the 1970s feature worn rubber inner tyres that resemble repaired intestines, flacid phalluses, and wounded flesh. In later figurative works, the horrifyingly poisoned ecology of 1990s European farming practice is evoked in her Mad Cow series that feature images of demented cows’ jaws and teeth, and udders that resemble human breasts.

ABOUT FERGUS McCAFFREY
Founded in 2006, Fergus McCaffrey is internationally recognized for its groundbreaking role in promoting the work of postwar Japanese artists such as Sadamasa Motonaga, Natsuyuki Nakanishi, Kazuo Shiraga, and Jiro Takamatsu. The gallery also exhibits the work of emerging and seminal Western artists such as Marcia Hafif, Birgit Jürgenssen, Richard Nonas, Sigmar Polke, and Carol Rama.

In keeping with the gallery’s commitment to Japanese art and culture, we are pleased to announce that Fergus McCaffrey has recently opened its Tokyo outpost this past March with an exhibition of paintings by Robert Ryman.