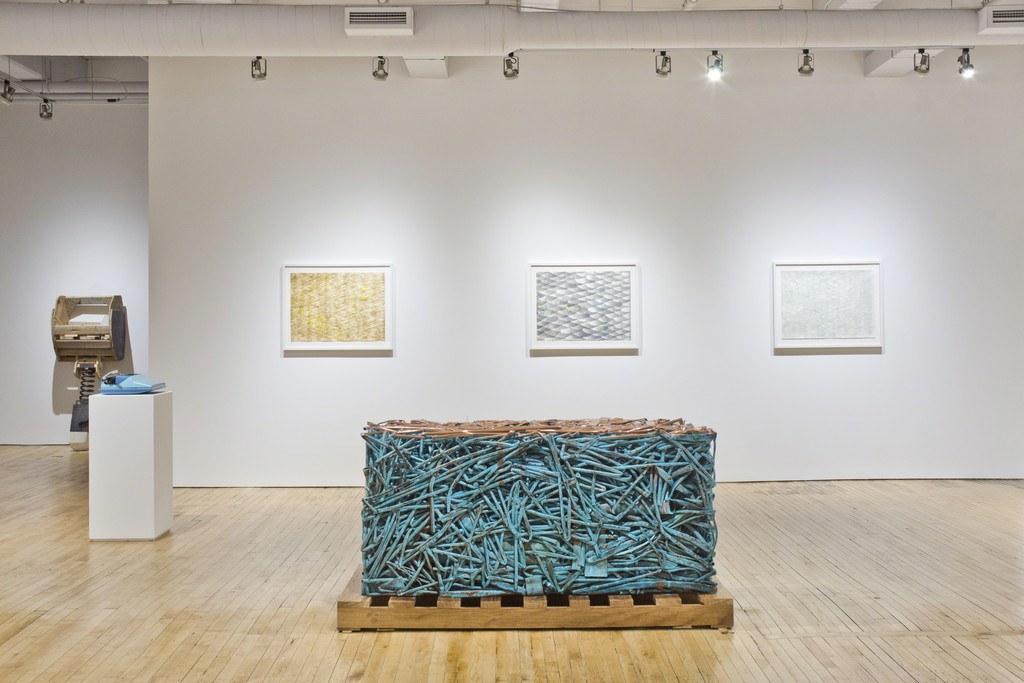 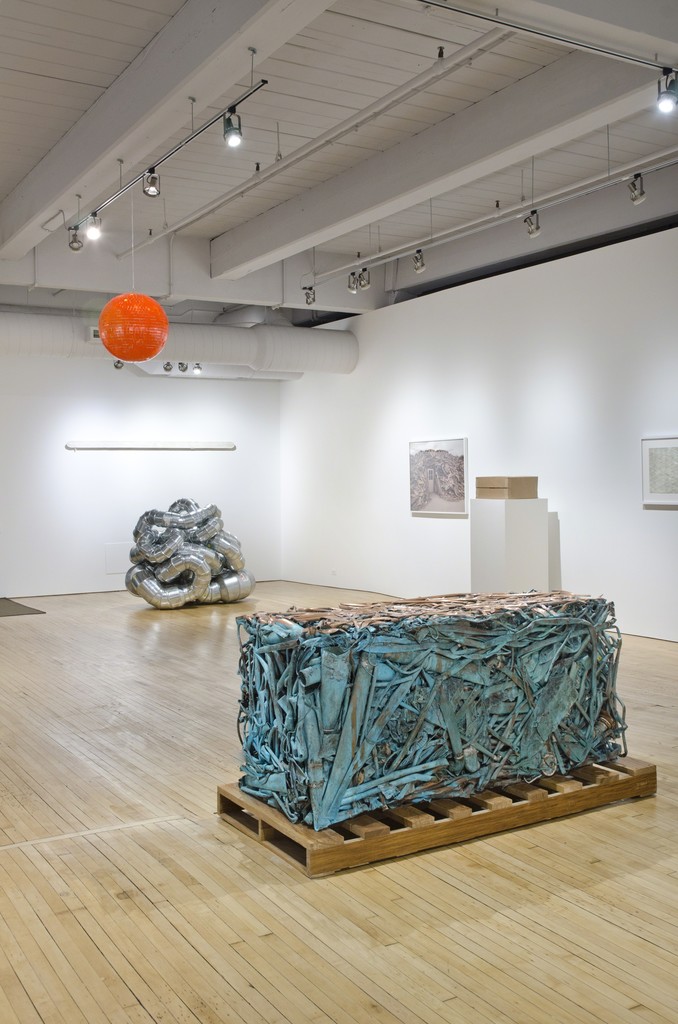 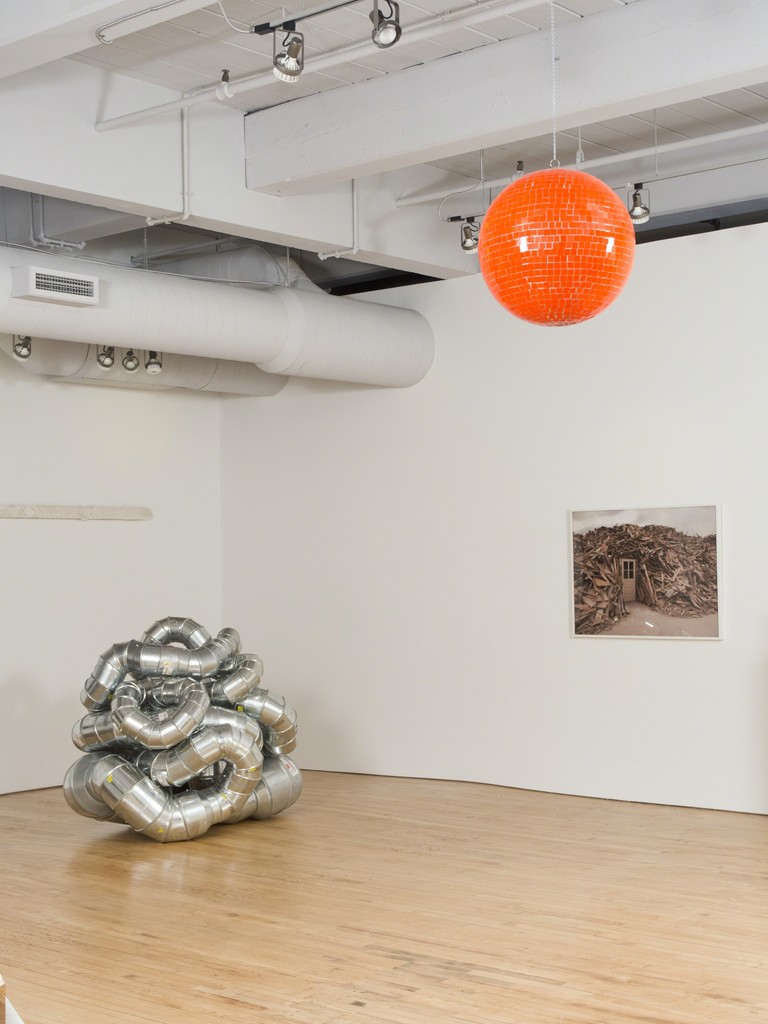 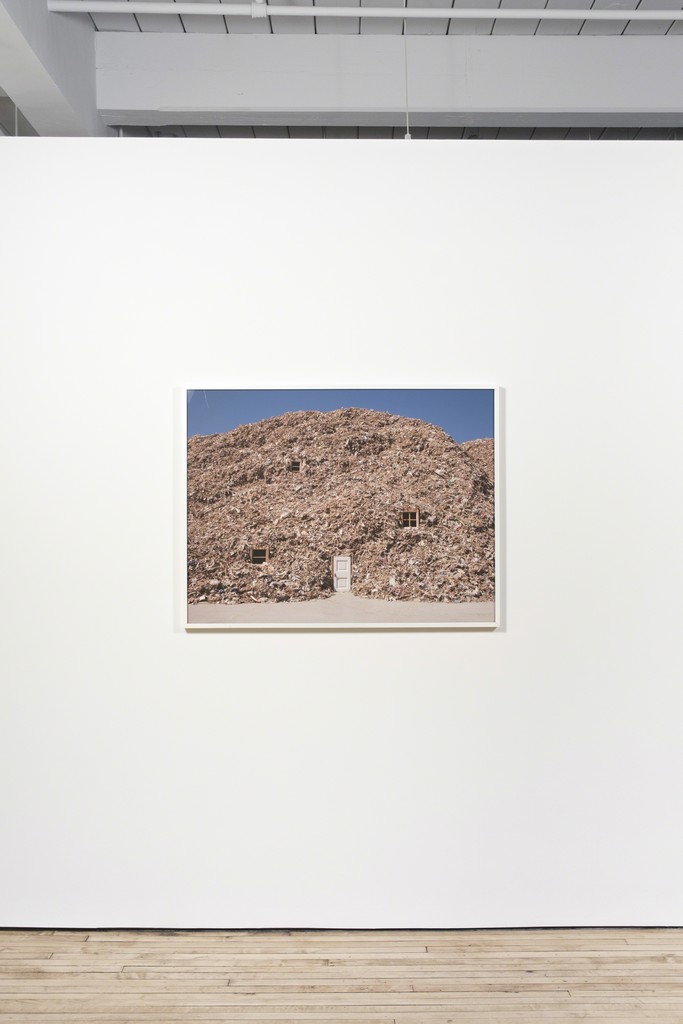 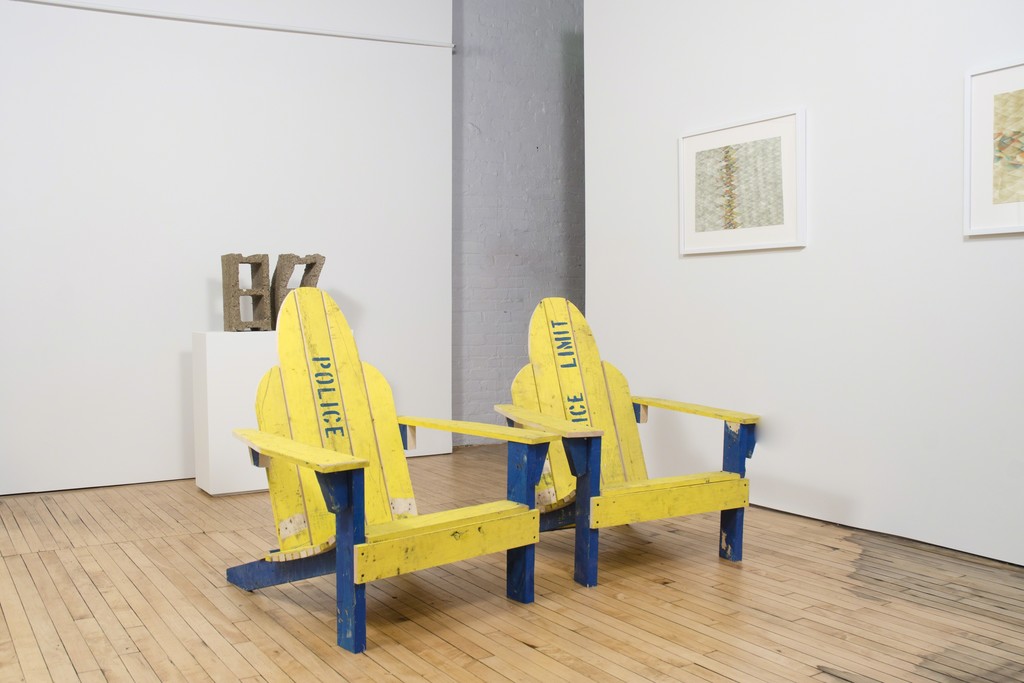 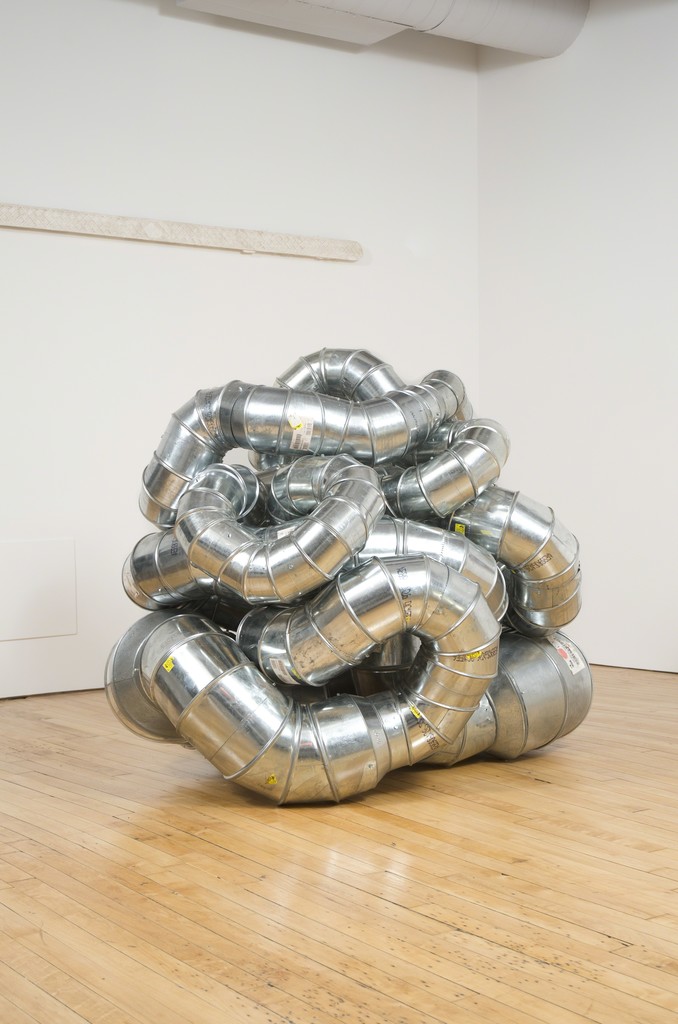 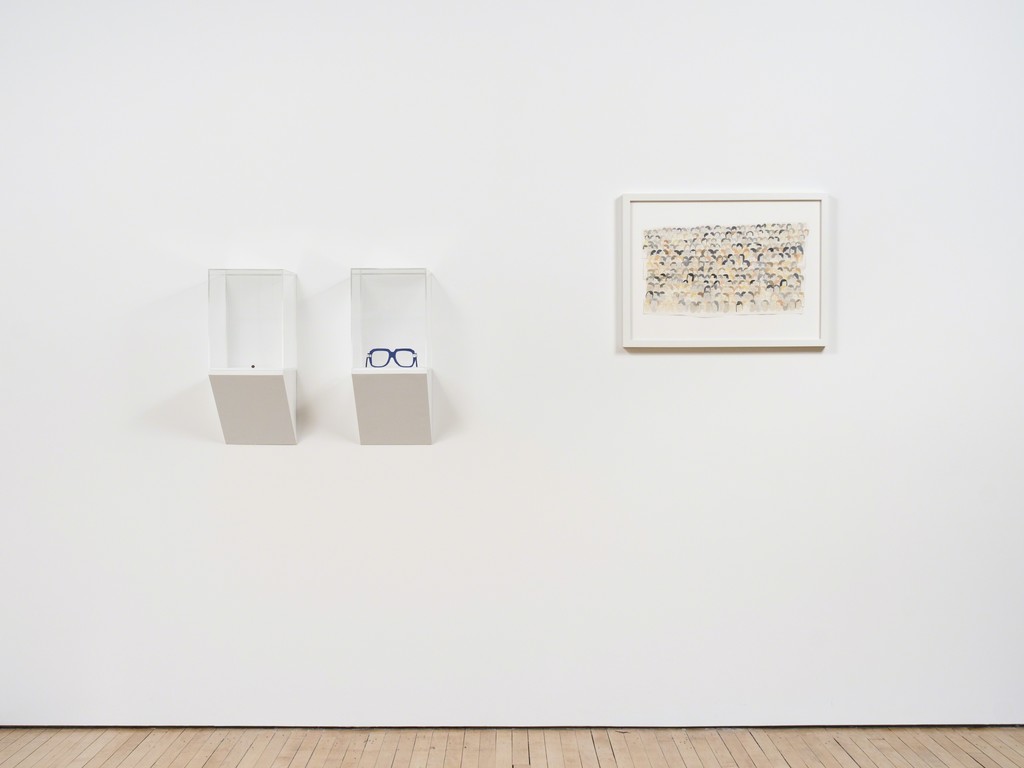 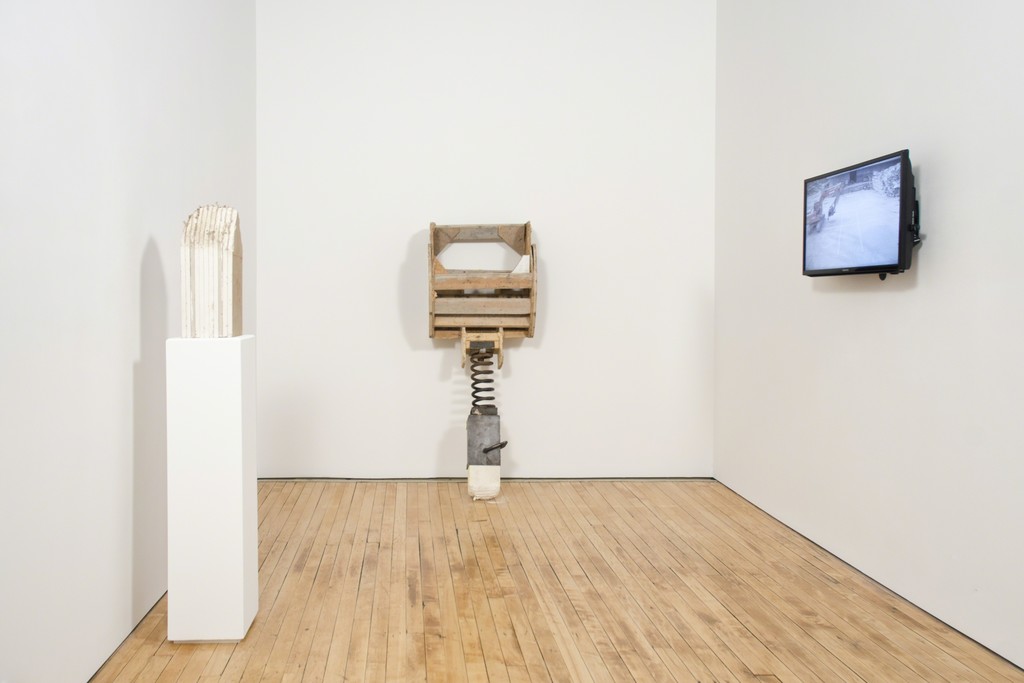 A large-scale photograph of a perilous wood pile on the verge of collapse nearly belies its status as a dwelling if it wasn't for the front door. Both the pile and the doorway share an architectural provenance as the image that lies before us is an installation of demolition debris representative of the many Philadelphia homes crushed under the weight of redevelopment in the name of urban rebirth. Open the door and step into the Dufala Brothers' third exhibition at Fleisher/Ollman, where new sculptures, drawings, videos, and photographs all offer pithy, Dada-like commentaries on our post-industrial condition. While employing both Swiftian, dystopian wit and heartfelt sincerity regarding the troubling excess and wastefulness of our consumer culture, the Dufala Brothers are first and foremost clever object and image makers rather than environmental activists. Billy Dufala's role as a co-director of an artist-in-residency program (RAIR) at a refuse recycling center (Revolution Recovery) allows the Dufalas unprecedented access in which to cherry pick the gems of Philadelphia's urban detritus, imaginatively repurposing discarded elements and imbuing them with communicative power.

The Dufalas' new work ranges from the austerely minimal to the playfully functional. For instance, a 10-inch-square by 10-foot-long timber beam sourced from demolition materials evokes a John McCracken sculpture as if made by a Shaker craftsmen—it's actually a found object that the Dufalas have only slightly altered by sanding and finishing. If their elegant timber beam plays with a kind of found Minimalism, so does a cubic sculpture of baled copper wire. With the exception of carefully burnishing one side of the object to a lustrous shine, the remaining sides of the bale are basically left as is: green patina, the color of copper in its usual, oxidized and weathered state. While recalling the industrial, geometric forms of Donald Judd or Tony Smith, the Dufala Brothers' copper bale is technically a found object. Copper is baled into forms by recycling operations in order to be easily sorted, stored, and sold. Adirondack chairs constructed from police barricades enter the realm of functional design. They are useful and even comfortable compared to the Dufalas foray into furniture making several years ago when they created a living room set from itchy, rolled fiberglass home insulation. Despite their association with the great outdoors, the Dufala Brothers' Adirondack chairs are simultaneously urban—their materiality evokes corralled crowds while their form conjures misty mountains.

In the past, the Dufala Brothers' sculptures have been attuned to the dynamics of scale. In this exhibition, it is drawing that takes on this mission: delicate watercolors on a range of paper sizes go up against drawings on asphalt made with earth-moving equipment documented on video. The watercolors explore how pollutants react with surfaces of water. Oil, gasoline, and other chemicals are obviously harmful to our water supply and living things, but pollution's rainbow effects can be aesthetically arresting offering iridescent beauty as this new body of work demonstrates. These more intimate studio expressions stand in contrast to the performative, grand-scale excavator drawings, in which the machine's shovel is retrofitted with a special marking tool made from scavenged and then laminated sheetrock.

The Dufala Brothers both graduated with certificates from the Pennsylvania Academy of the Fine Arts. They have had solo exhibitions at the West Collection, Oaks, PA; Delaware Center for Contemporary Arts, Wilmington, DE; Cantor Fitzgerald Gallery, Haverford College, Haverford, PA; Buffalo State College, Buffalo, NY; and Space 1026, Fleisher/Ollman, and Fleisher Art Memorial, all in Philadelphia. The Dufalas have been featured in many group exhibitions in the Philadelphia region in venues such as the Philadelphia Museum of Art, the Pennsylvania Academy of the Fine Arts, the Galleries at Moore College of Art, Space 1026, Slought Foundation, Globe Dye Works, Delaware County Community College, and Fleisher/Ollman. Elsewhere, they have shown at the John Michael Kohler Arts Center, Sheboygan, WI and Naidre's, Brooklyn, New York. In 2014, the Dufala Brothers were resident artists in Philadelphia's Mantua neighborhood where they collaborated with local church and civic leaders in organizing a funeral for a home slated for demolition (project overseen by Temple Contemporary, Philadelphia). In 2009, they received the West Grand Prize. They will be featured in the City of Philadelphia Mural Arts' Open Source project, where the Dufalas will create a waste transfer station at a vocational high school in South Philadelphia. Their work is in the collections of the Philadelphia Museum of Art and the Pennsylvania Academy of the Fine Arts.