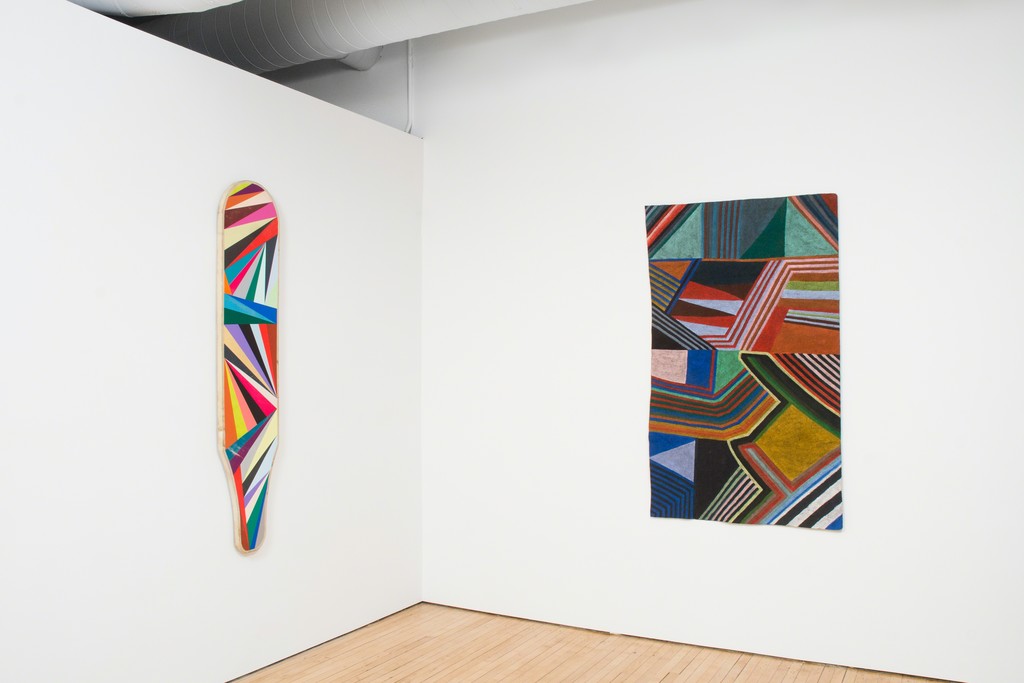 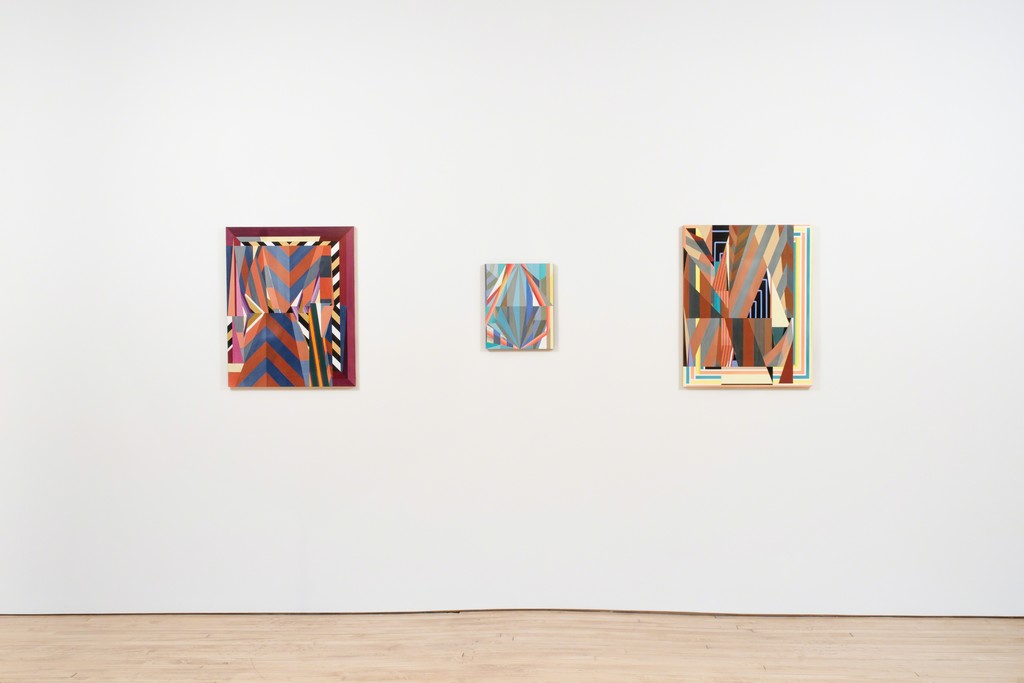 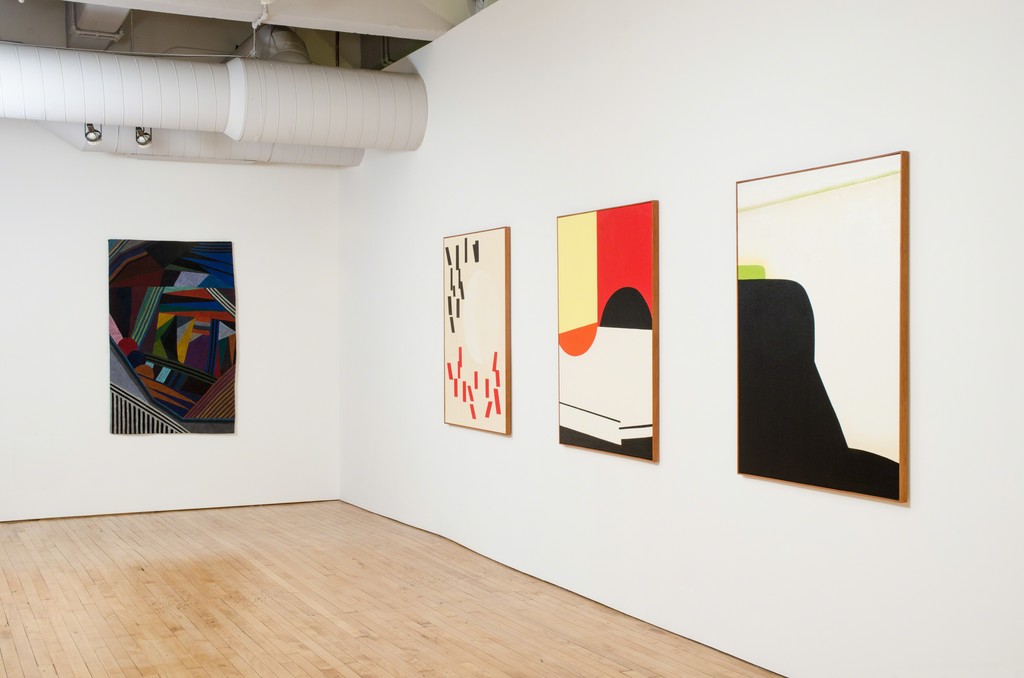 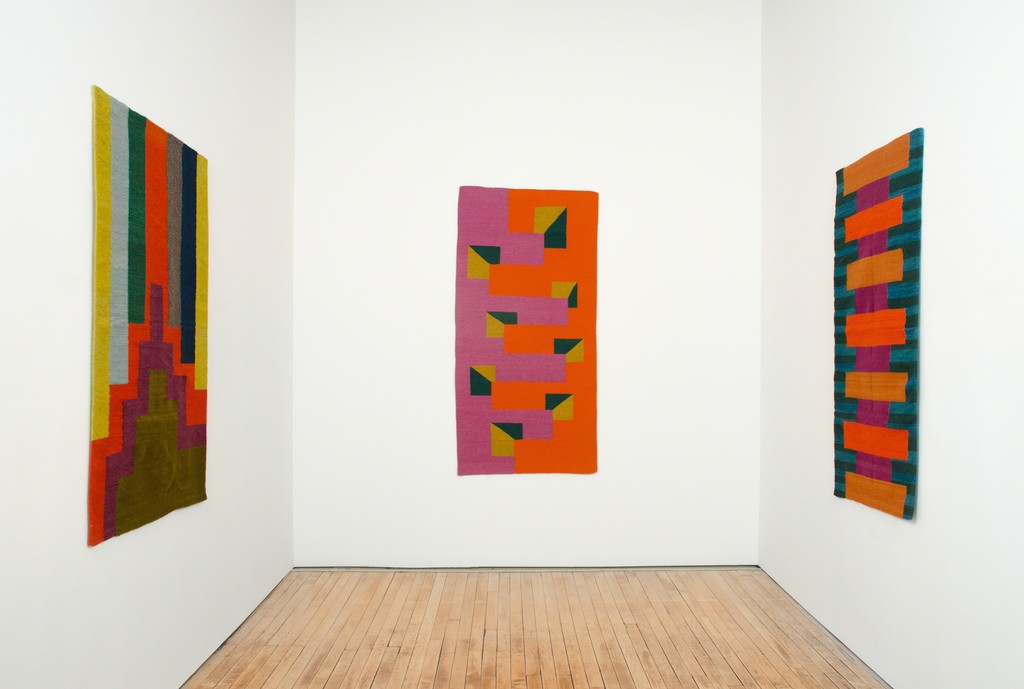 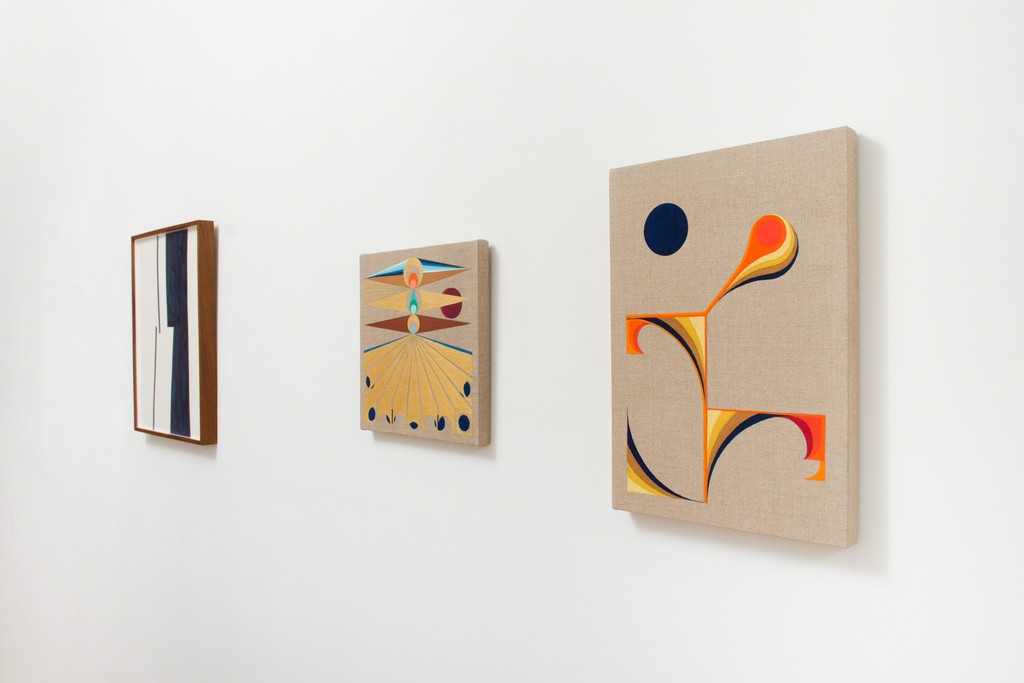 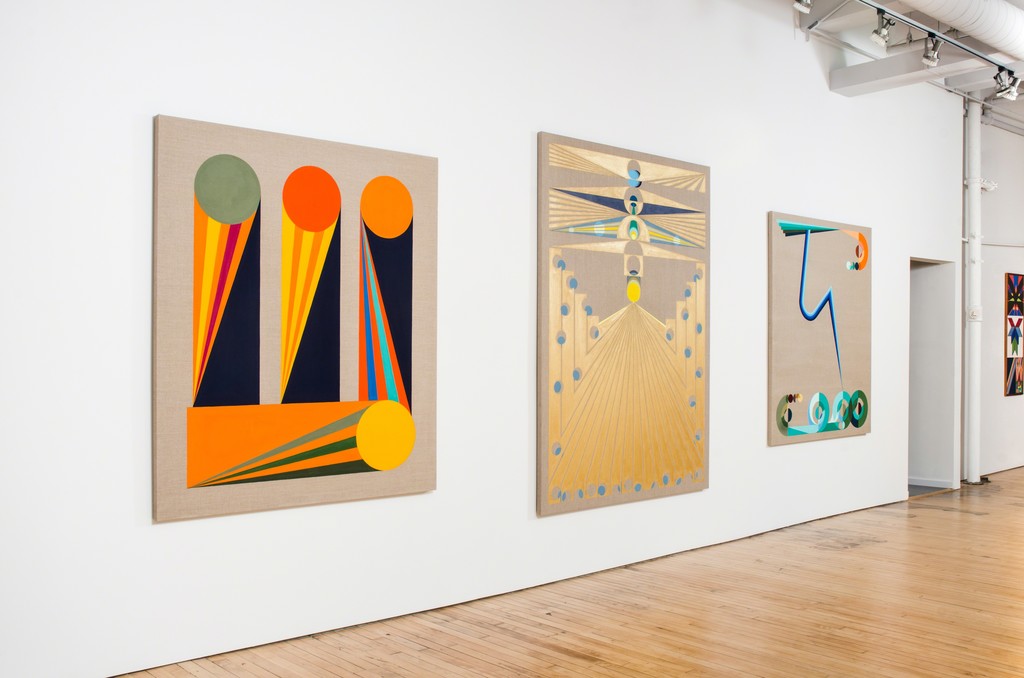 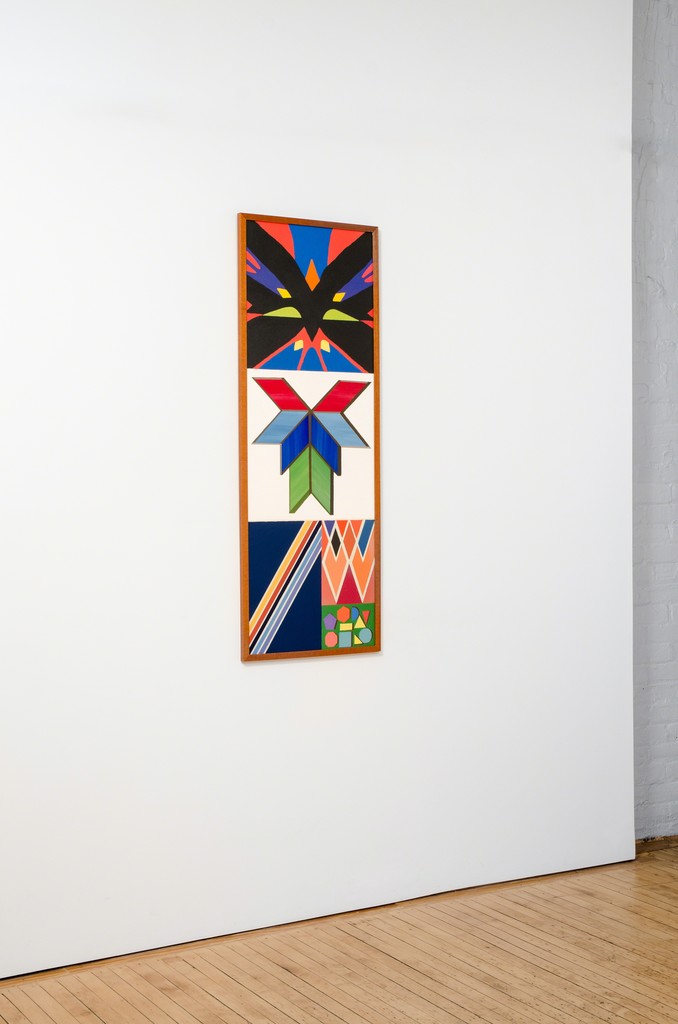 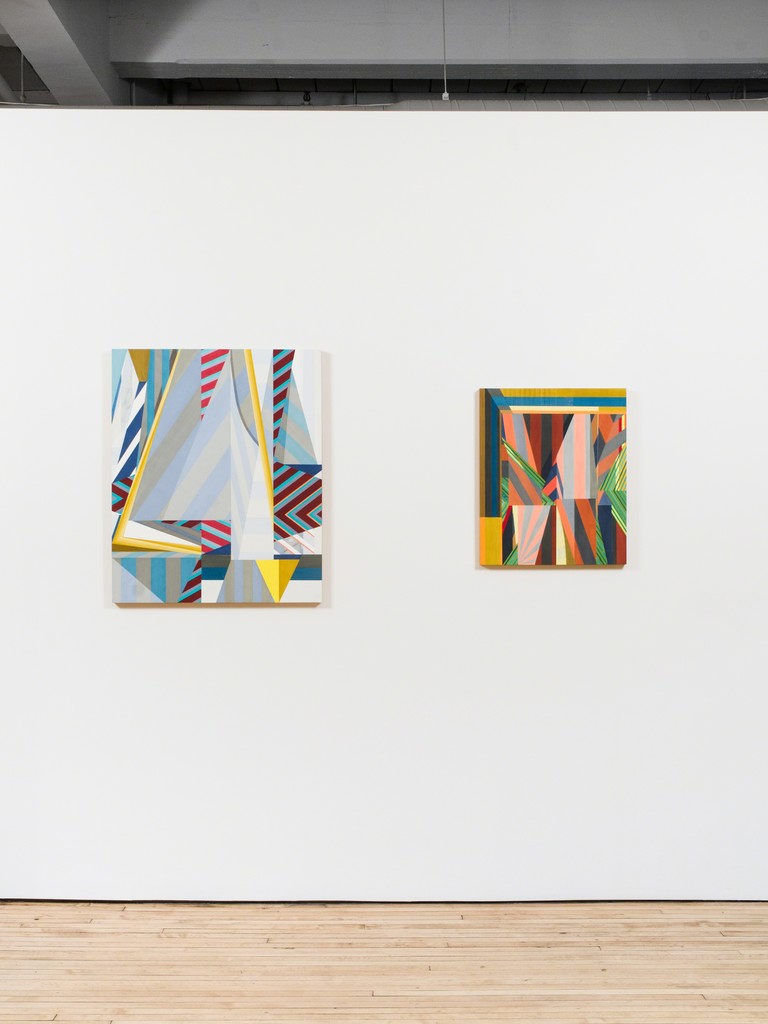 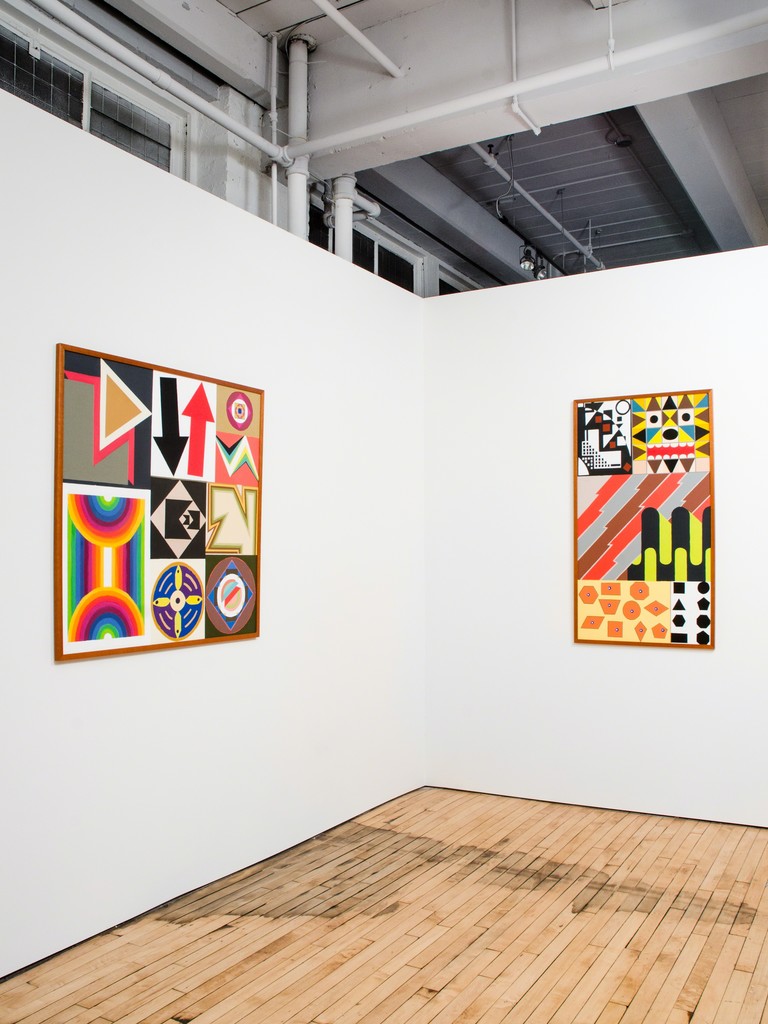 Over the past several years, abstract painting has become, once again, a buzz phrase within contemporary art. Much of the buzz has been backlash: painters accused of zombie formalism, sleepwalking through hackneyed styles and gimmicks that speak to market desires. New Geometries proposes another take on contemporary artists engaging with abstraction: an abstraction that is of the world, not just of the market. The work is geometric in nature and takes its cues from Constructivism, Suprematism, and Latin American modernism—art movements that came to being in order to address the radical changes of the modern era, be they political, social, visual, or otherwise. New Geometries presents artists who use the idioms of historical modernism to speak to ideas of the present, including the parallel modernisms of indigenous cultures; art and utility; and modernism as folk art. Featured artists ask us to consider what role geometric abstraction might serve in our current non-utopian times, just over one hundred years after Kazimir Malevich and Vladmir Tatlin's watershed exhibition, The Last Futurist Exhibition of Paintings 0.10., which featured Malevich's iconic Black Square and Tatlin's architectural relief sculptures—works that cast long shadows in the history of art and still resonate today.

Martha Clippinger's works included in New Geometries are not paintings at all, but hand-woven textiles that evoke aspects of painting (rectilinearity, a relationship to the wall), while also proposing abstraction's use value. According to the artist, they can just as well be used as rugs. Created in collaboration with Oaxacan weavers, the tapestries resonate strongly with the history of geometric abstraction, which has found itself in pragmatic contexts like interior, industrial, and graphic design.

At first glance, or from a distance, Gianna Commito's paintings seem perfectly executed. However, careful viewing rewards the viewer with Commito's layered, fractured, and scaffolded forms—a handbuilt imaginary architecture. Ledge marks from tape, visible underpainting, and paint loss collectively conspire to give Commito's paintings an imperfect appearance. One may be tempted to situate Commito within a modernist lineage celebrating the machine and the city (think Italian Futurism or American Precisionism), but Commito is more interested in entropy and folk architecture than paeans to progress.

The three paintings by Diena Georgetti included in New Geometries are from her Folk Modern series—an interesting juxtaposition of terms that might seem diametrically opposed. Georgetti synthesises these supposed opposites by combining the utilitarian and decorative tendencies that underpin the generic conception of the word "folk" with the non-representational and non-functional attributes that we often associate with "modern" by painting geometric abstractions with use value. Identifying herself as a painter, curator, and collector all at once, Georgetti sees these paintings as having a particular purpose within a domestic setting. Incorporating a range of touchstones in her work, from Frank Stella to Brazilian Concrete Art to children's play blocks to Bauhaus decorative art, Georgetti believes that the Folk Modern series emanates powers that directly affect viewers: one painting acts as a protector, one as a motivator, and one as a mood enhancer.

Both colorful and incorporating materials that may signal domesticity, Jeffrey Gibson's paintings are also dense with personal and cultural significance, with the specter of modernism always looming nearby. Included here are geometric paintings on army surplus blankets and one on rawhide over an antique ironing board that relate Native American and modern narratives simultaneously. The blanket has a rich history and present day significance for Gibson, who is Native American, as blankets have been exchanged as gifts celebrating major life events for multiple generations. They have also been associated with 18th and 19th century tales of genocide in which the US government allegedly gave smallpox-infected surplus blankets to the indigenous population.

Eamon Ore-Giron originally worked in figuration before developing his signature abstract style. His paintings resonate with artists and movements of the past and present, including Suprematism; Latin American Concrete Art; and the geometric minimalism of Cuban-American painter Carmen Herrera. Ore-Giron uses CDs and dubplates from the music he once made as templates to create structures for his paintings. The bright colors and designs on expanses of raw linen bring to mind Moholy-Nagy's paintings of the 1920s, which prominently featured similar unpainted grounds, but might just as well originate from Ore-Giron's coming-of-age in Tucson, Arizona, an arid environment in which color always pops in the brown landscape. Recently, Ore-Giron has been integrating gold into his color palette, evoking the great traditions of gold artistry in countries like Peru, his father's birthplace, and a place Ore-Giron continues to strongly identify with.

Like Ore-Giron, Clare Rojas moved from figure-based narrative paintings to abstraction. For about a decade, Clare Rojas was renowned for her folk art-inspired figurative paintings exploring gender relations punctuated by quilt-like patterning. In a radical shift, she began abstract painting in 2011. While she has jettisoned narrative, there remains a strong relationship between the patterns that served as the settings for figures in her previous work and her recent abstractions. Often painted on stark grounds, her new compositions evoke the work of Malevich's Suprematist painting in which sharply delineated shapes float on white expanses.

Martha Clippinger (b. 1983, lives and works in Durham, North Carolina) has shown in a variety of venues including c2c Project Space, San Francisco, CA; Spectre Arts, Durham, NC; Elizabeth Harris Gallery, Hionas Gallery, Leslie Heller Work Space, and Minus Space, all in New York, NY. She has also shown at AUTOMAT, Philadelphia, PA and the Center for Contemporary Art, Bedminster, NJ, among other venues.

Gianna Commito (b. 1976, lives and works in Kent, Ohio) has exhibited her work at Rachel Uffner Gallery, Gavin Brown's Enterprise, Taxter and Spengemann, and The Drawing Center, all in New York, NY, as well as the Museum of Contemporary Art, Cleveland, OH, and others.

Diena Georgetti (b. 1966, lives and works in Kooralbyn, Australia) has exhibited widely in Australia and New Zealand at commercial venues such as Darren Knight Gallery, Sydney; Hamish McKay Gallery, Wellington; Michael Lett Gallery, Auckland; and Sarah Cottier Gallery, Sydney. In 2008, Georgetti had a mid-career retrospective at Monash University Museum of Art, Melbourne, which traveled to the Institute of Modern Art, Brisbane. She was included in the 9th Biennale of Sydney in 1992, and significant group exhibitions at venues across Australia including Art Gallery of New South Wales, Art Gallery of South Australia, and the Australian Centre for Contemporary Art. Her work is included in public collections at all major museums in Australia and New Zealand. This is her first time showing in the United States.

Jeffrey Gibson (b. 1972, lives and works in Germantown, New York) has had solo exhibitions at venues including Savannah College of Art and Design, GA; the National Academy Museum, New York, NY; the Institute of Contemporary Art, Boston, MA; and the Cornell Museum of Fine Art, Winter Park, FL. He has participated in Greater New York, MoMA P.S. 1, New York, NY; Prospect New Orleans, LA; and Site Santa Fe, NM. Gibson's work is in the permanent collections of many major art museums, including the Museum of Fine Arts, Boston, MA; the Smithsonian, Washington, DC; the National Gallery of Canada, Ottawa, ON; Crystal Bridges, Bentonville, AK; and the Denver Art Museum, CO.