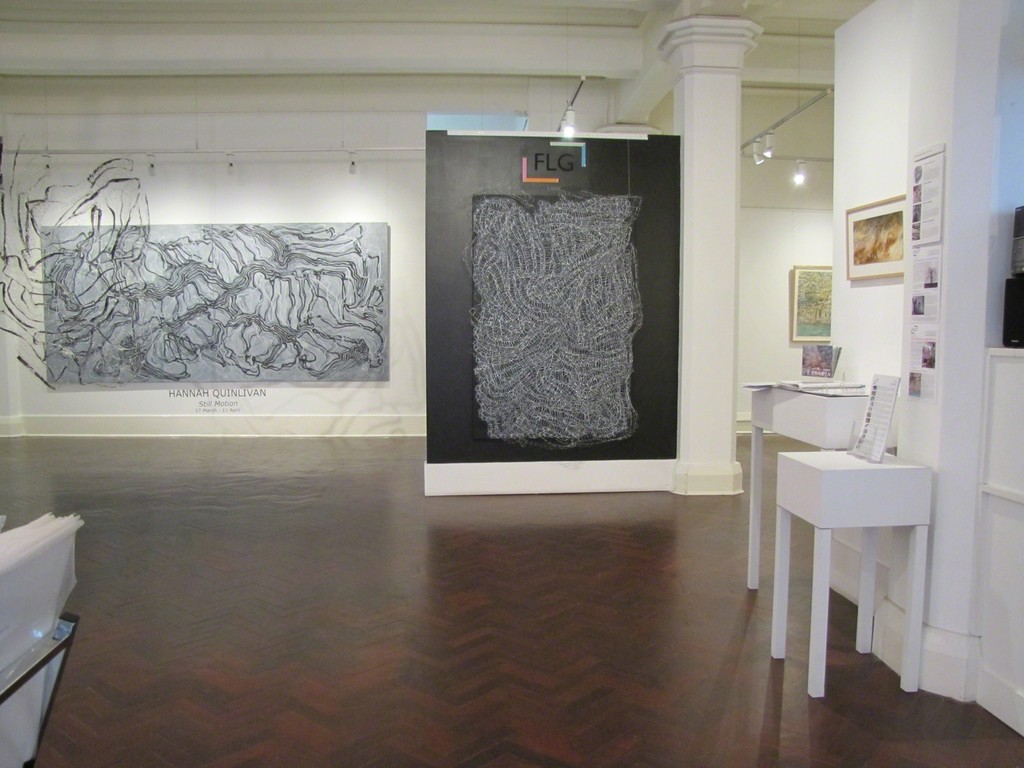 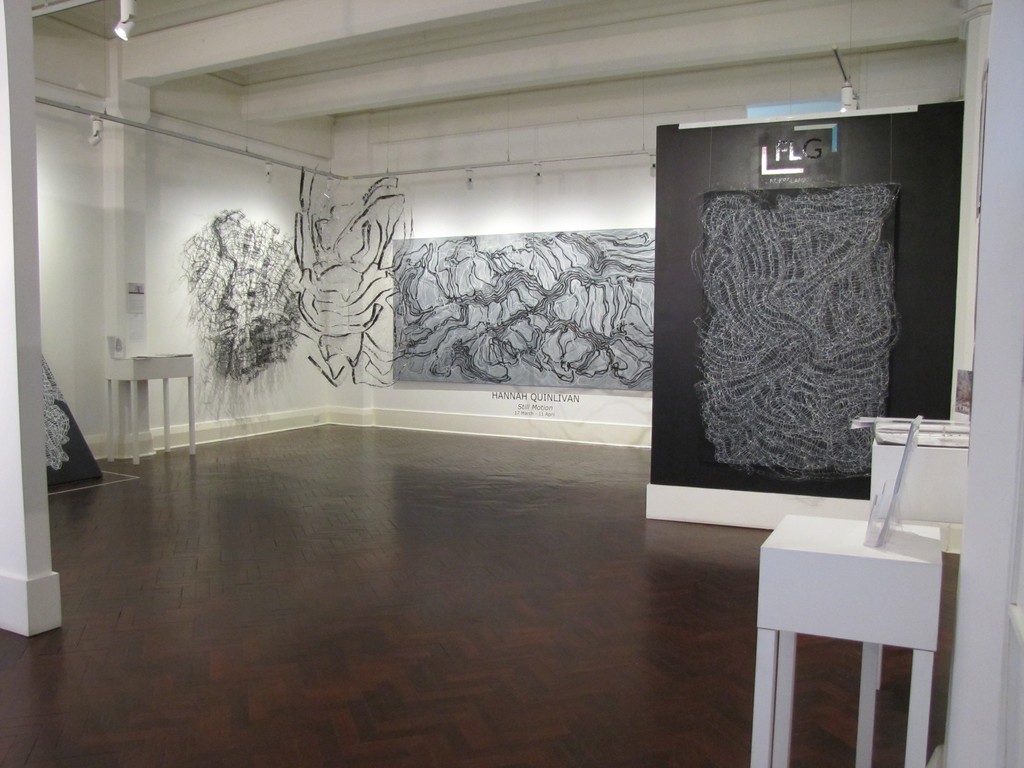 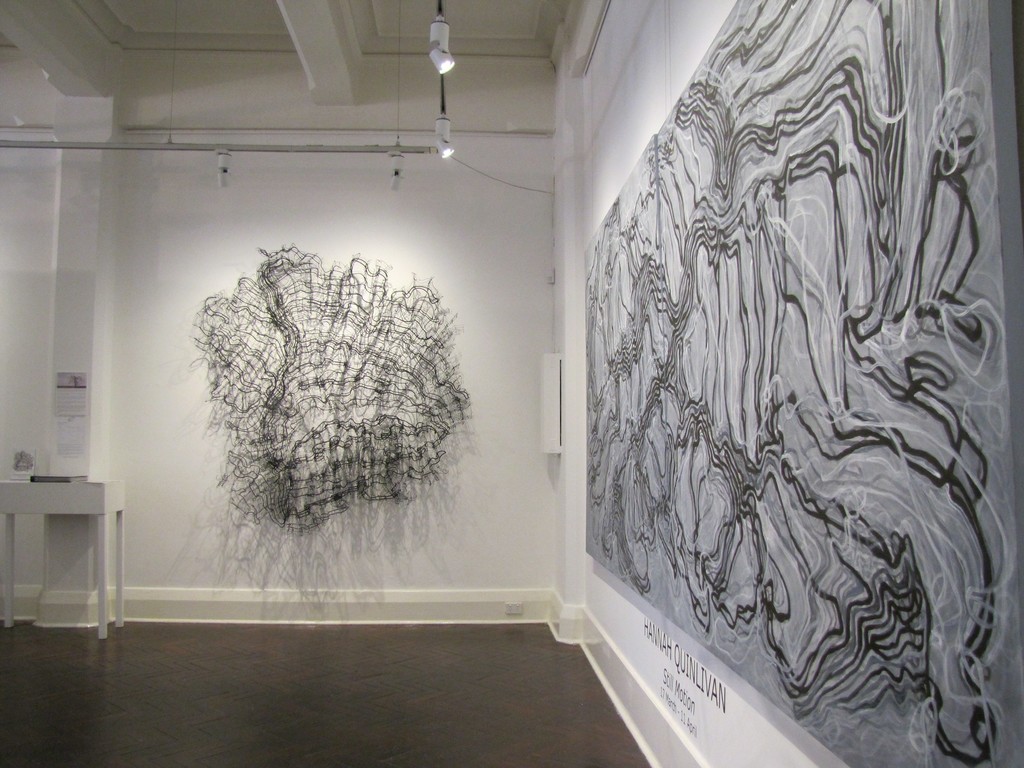 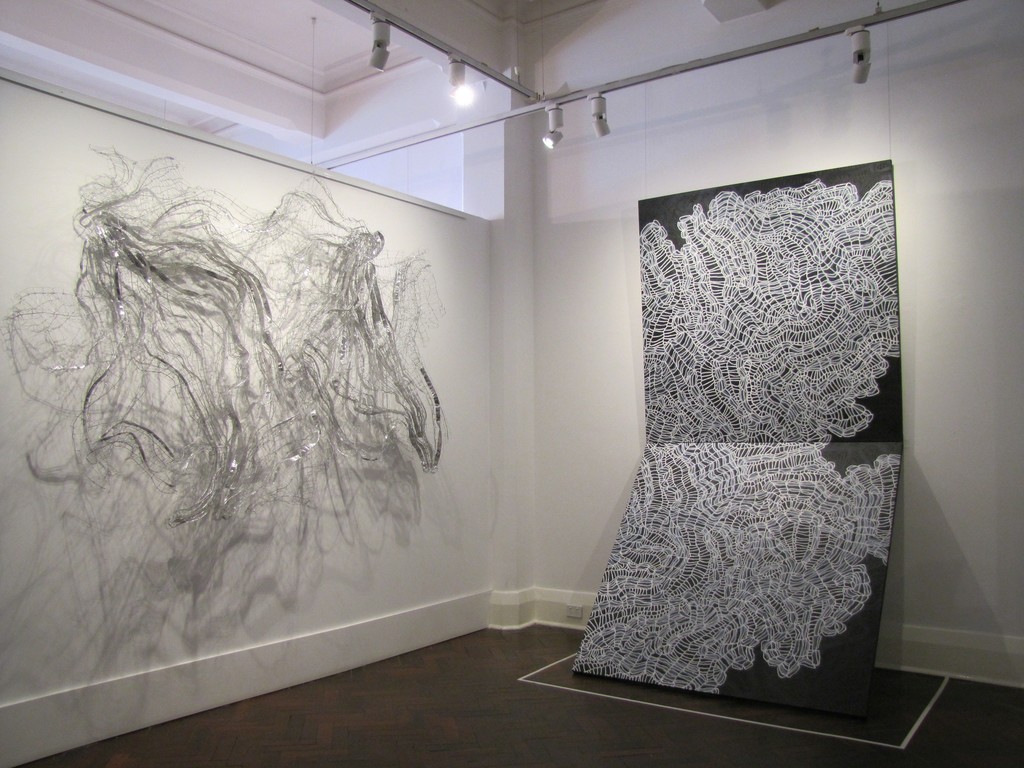 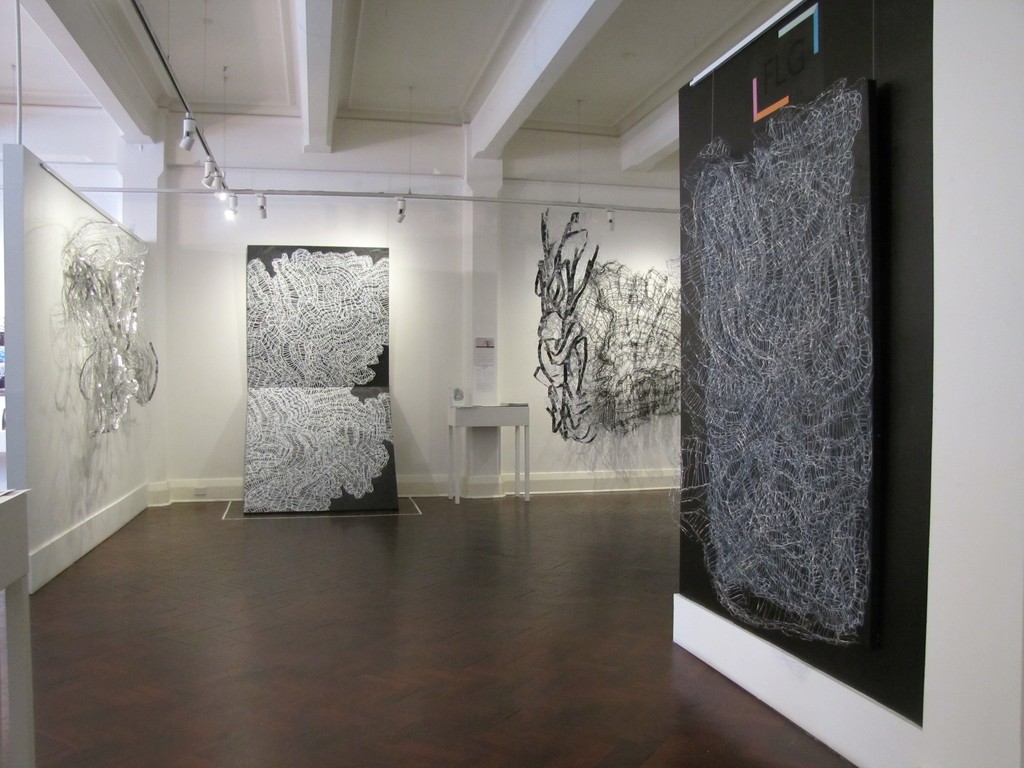 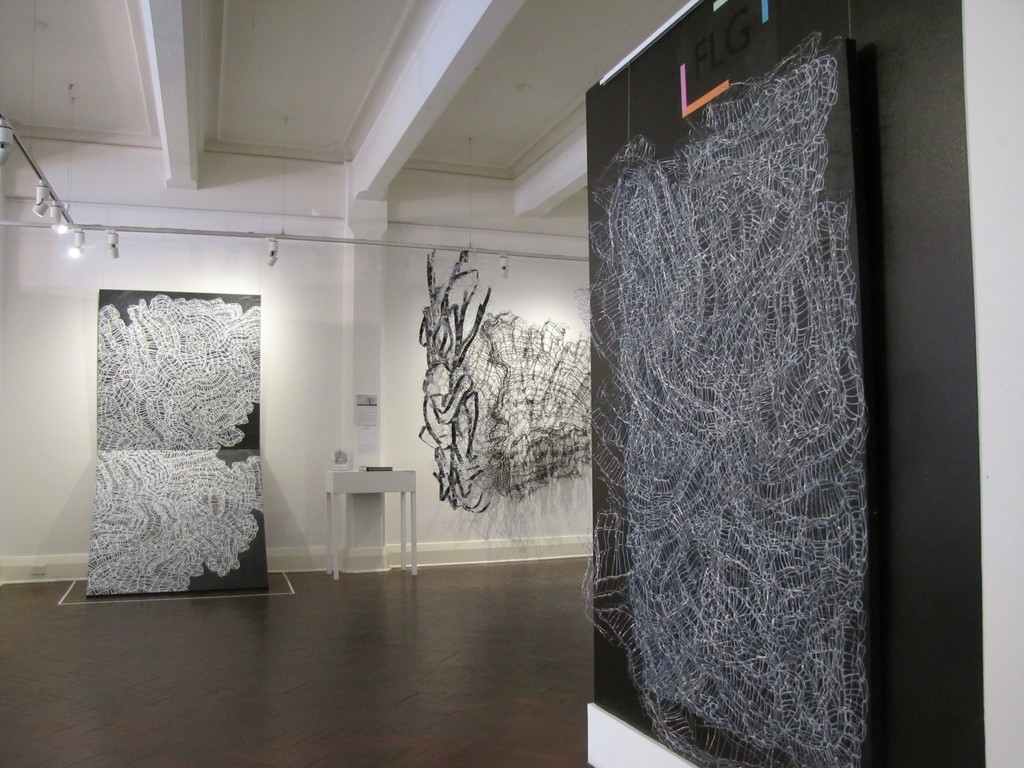 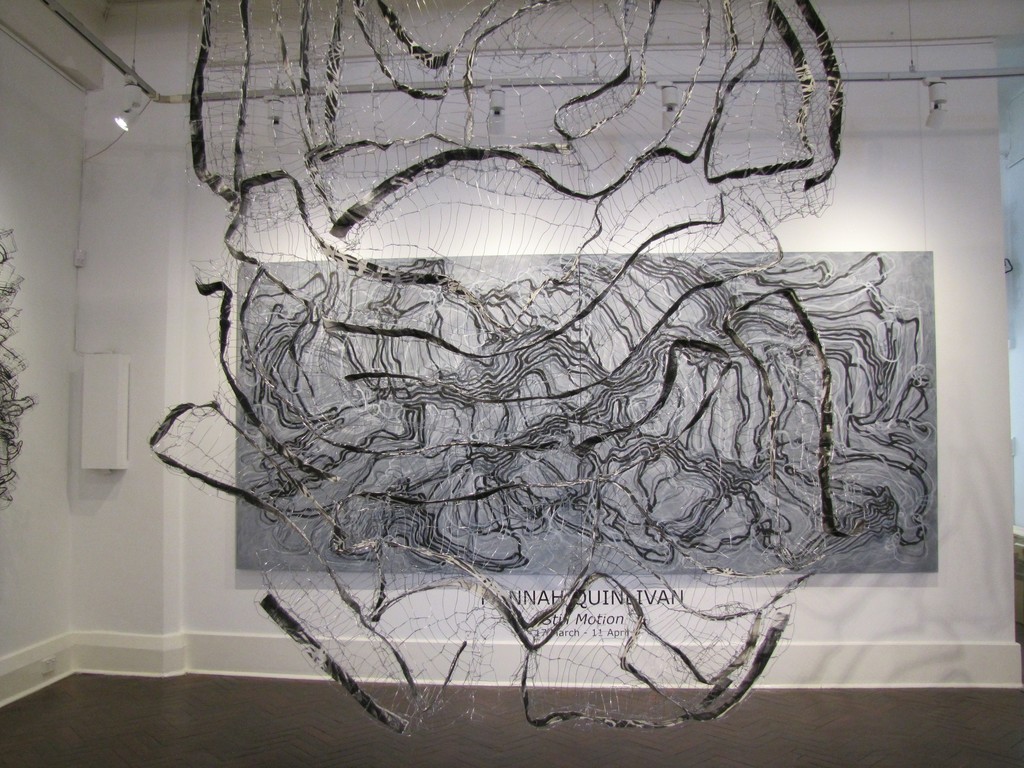 Time is unfixed, flowing fickle, fluctuating. Temporal asymmetries cleave and splinter. Frozen, dripping, gushing, moments drift and rush. Turgidities turn turbulent, echoing the glacial groans and moans of collapsing time. Unevenly distributed duration unhinges the conditions of the everyday. Not just fast forward but also slow motion, time is out of joint, stretched thin like a membrane and compressed like wrinkled skin. Stress fractures and crumple zones contour the unnatural course of life, marking crisis and contradiction. Rhythmic dilation and compound acceleration, these are the conditions of still motion. Quinlivan, 2015.

Hannah Quinlivan is a finalist in the 2015 Calleen Art Award and the City of Hobart Art Prize for Drawing. She was a Finalist in the 2014 Alice Prize and the winner of the Shire of East Pilbara Residency Award for 2014. She has also been awarded the Jump mentoring Australia Council for the Arts 2014.

Hannah has been awarded the Cox Prize for Sculpture at Sculpture on the Edge 2013. She was a finalist in the 2013 Geelong Acquisitive Print Awards, the 2013 Silk Cut Award and the CPM National Print Awards. She was also awarded an Australia Council ArtStart grant allowing her to travel to Berlin to complete a mentorship with Monika Grzymala and undertake a residency in August, both of which she has been invited back for in 2014. Hannah's first solo exhibition in 2013 at FLG sold out. In 2013 she undertook another residency at INSTINC in Singapore, culminating in a solo exhibition at the Australian High Commission to be followed by another residency and solo exhibition in Japan.

Hannah Quinlivan’s work is varied in its form and materials of construction, yet consistently employs infinitely twisting and turning lines as a conduit of expression. There is a sense of abundance within Quinlivan’s creative approach that is reflected in these un-ending lines, lines that fill up enormous expanses of canvas in her painted and drawn two dimensional works, or that consume volumes of space in her sculptural pieces that have also been described as spatial drawings. In this latest series of work she explores notions surrounding temporal reality and memory, mining these unseen realms through a rhythmic and organic visual language.

With each aluminum or steel thread of wire that the artist bends upon itself and weaves into others, Quinlivan allows her intricate craft to direct the expression of certain themes. The energy of creation required by this process driven technique is communicated to the viewer upon encountering each piece, as the numerous delicately wrought connections seems to resonate with a vibrational hum.

Quinlivan’s lines of steel or drawn threads become bearers of ideas that transcend their materiality. Linear threads and their haptic manipulation have for millennia been symbolically connected to notions of time. The Moirai of ancient Greek mythology, also known at the Fates, were three goddesses who through the act of spinning thread with distaff and spindle, controlled the life of every person from birth to death, when their thread was abruptly cut. Similar female deities exist in Roman, Norse and Slavic mythologies, where thread is consistently wielded as a manifestation of destiny. As such, a simple strand and the way it is stretched, allotted and truncated, became an ancient way of comprehending the movement of a human life through time.

Yet as suggested by the title of this exhibition, Still Motion, Quinlivan conceives of time not in terms of a straight progression, but rather as a fractured experience that speeds up or slows down from one moment to the next, depending on a myriad of internal factors which alter our perception of it. As an area of enquiry the concept of time traverses psychological, scientific, mythological and philosophical realms. Quinlivan makes her own artistic contribution to this field of understanding, expressing the ambiguous, shifting, circular (rather than direct) nature of time through line-work that conveys such dynamic states.

A sense of interconnection is another critical notion that underpins Quinlivan’s practice. Not only is this apparent through the myriad of intersecting and conversing visual elements of the work, but in the fact that the artist allows each piece in a series to inform the next. This occurs as she traces the shadow lines cast by her three-dimensional spatial drawings, which subsequently form the basis of future works. Thus each piece contains the echoes of its predecessors, woven together into an overarching web. This generative interconnection, and the aesthetic elaborations that permeate her practice form an elegant expression of the nature of memory itself – specifically the meandering, non-static pathways of the human psyche that carry the continual resurgence, and modification of memories.

While charting this complex internal topography, Quinlivan evokes both an ephemeral delicacy and mineral toughness that belies the immediate sense of fragility present within her work. Excavating the intangible, Quinlivan’s works oscillate between tranquility and flux, existing in a paradoxical state aptly described as still motion.