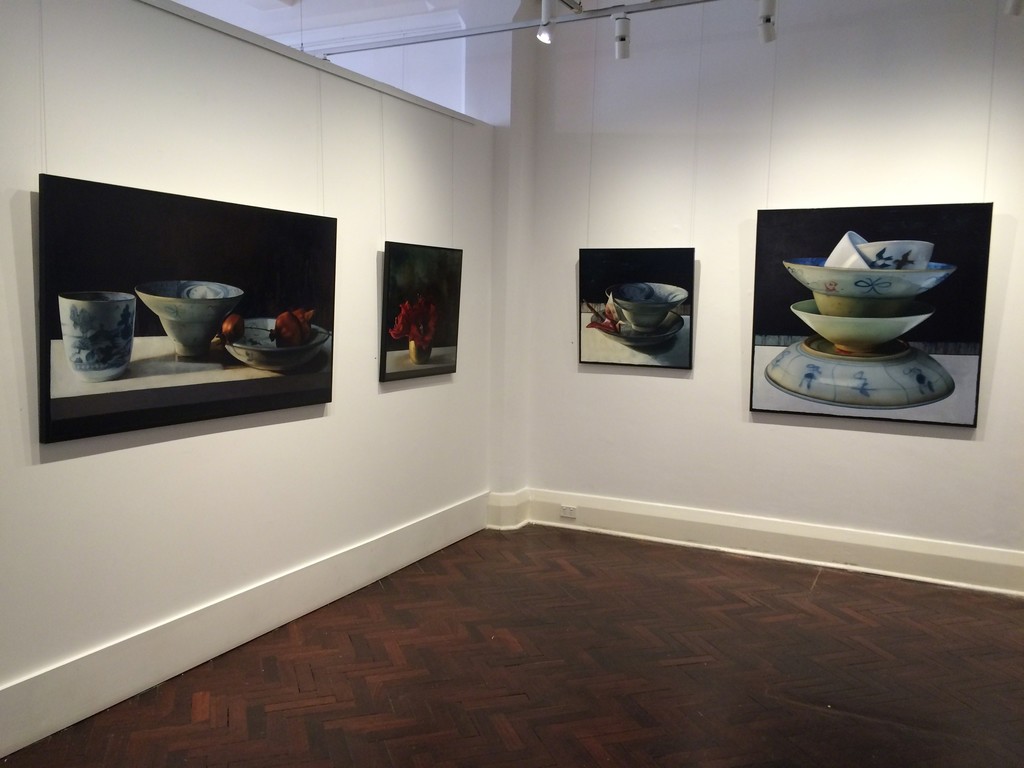 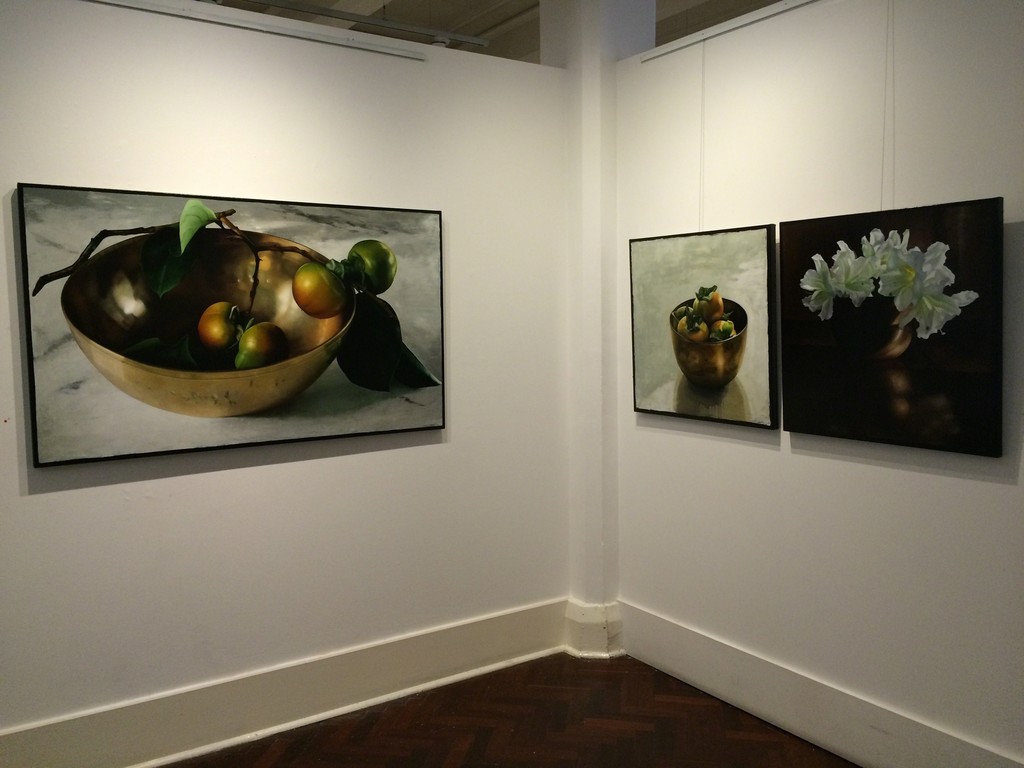 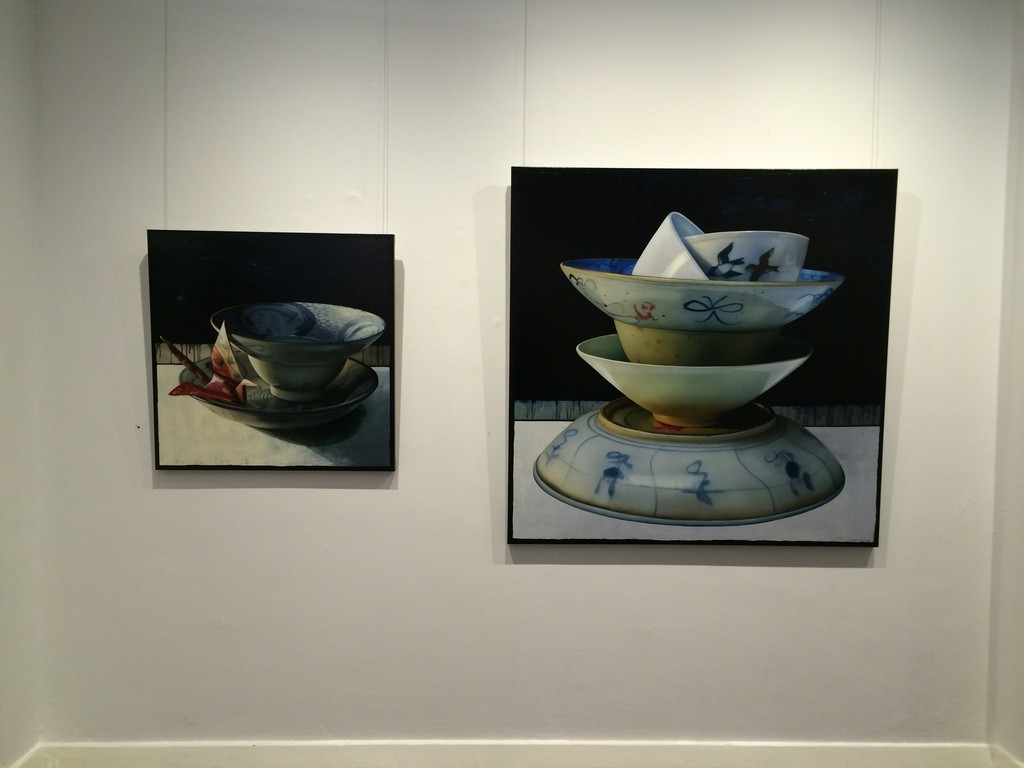 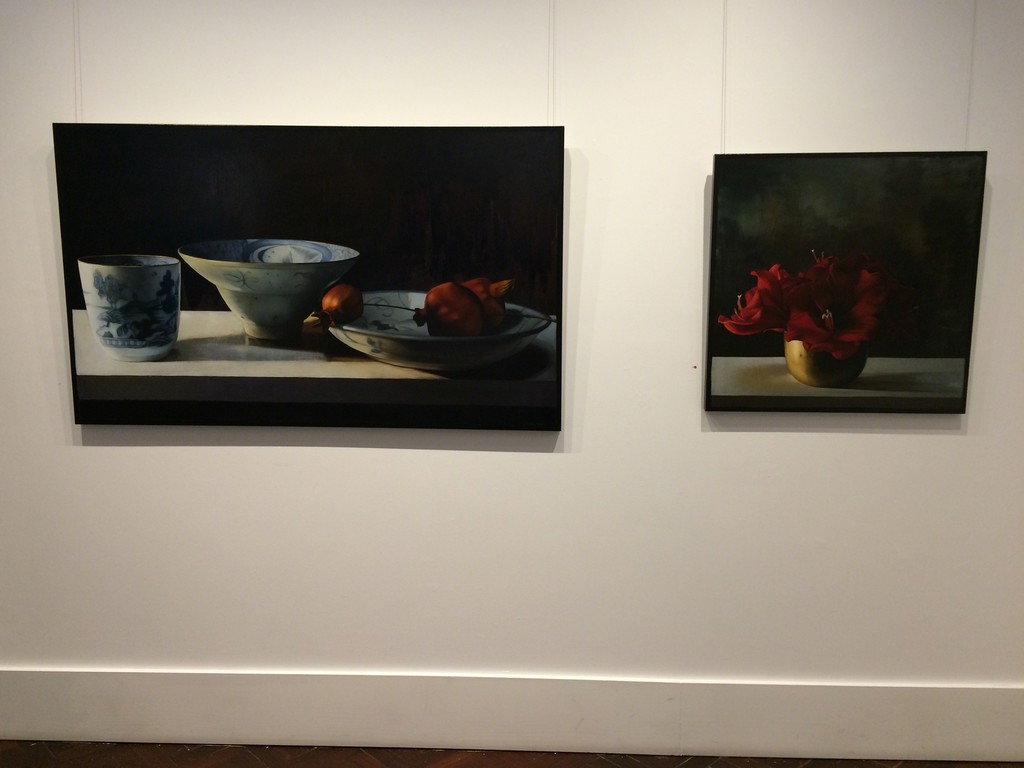 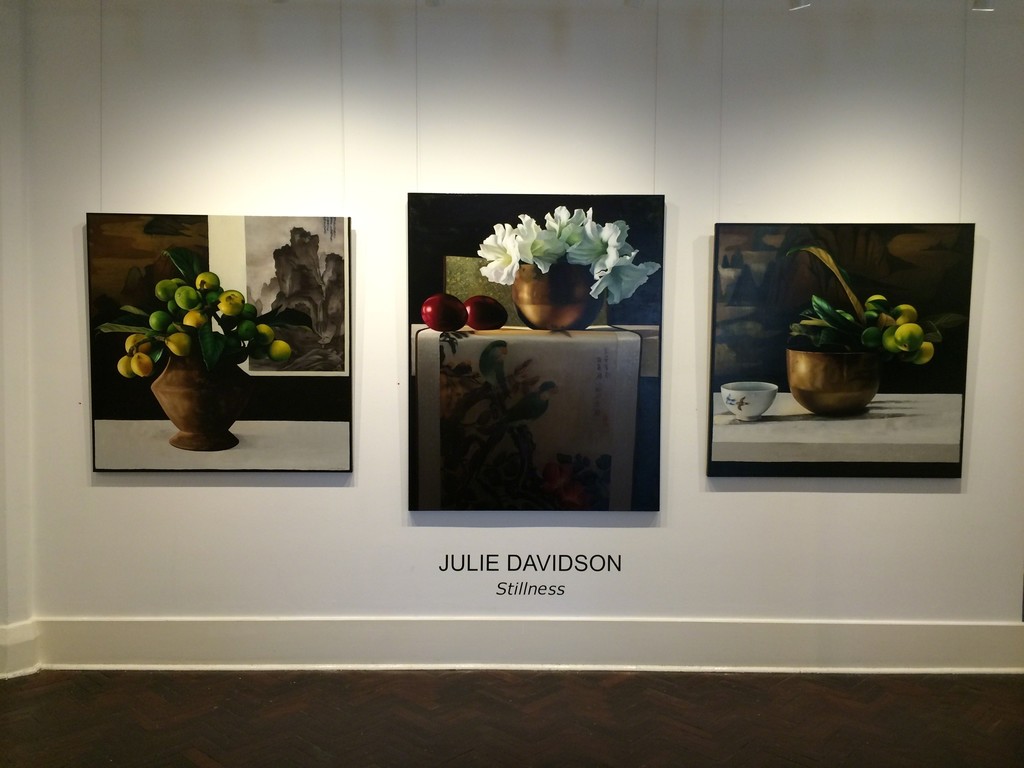 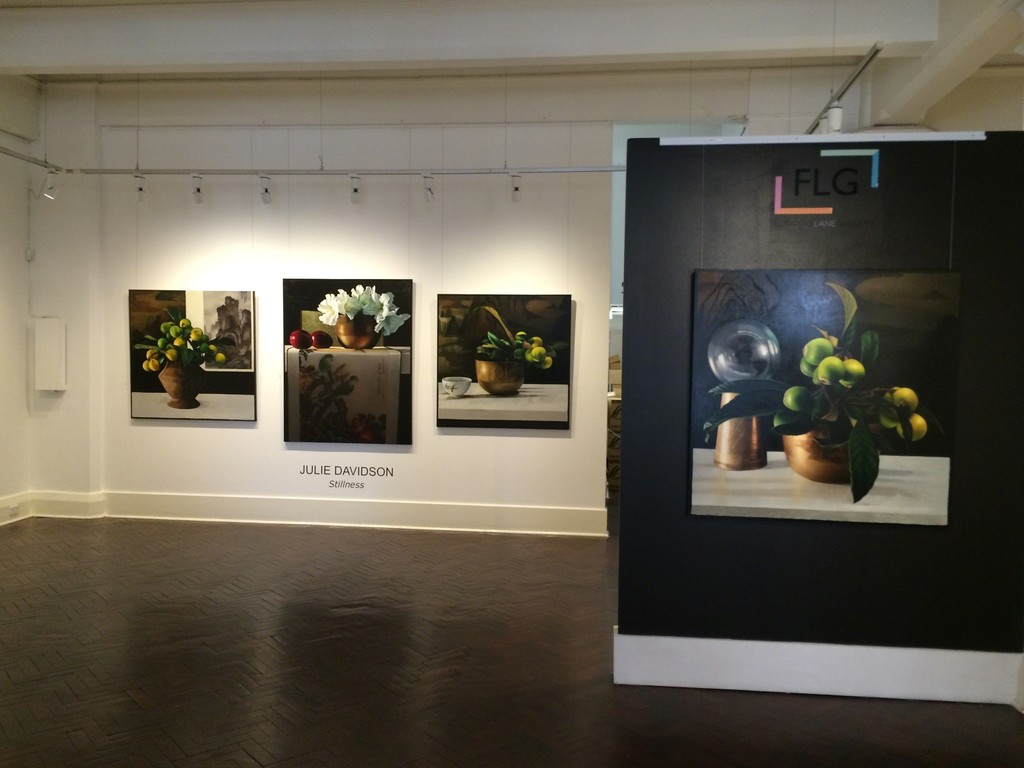 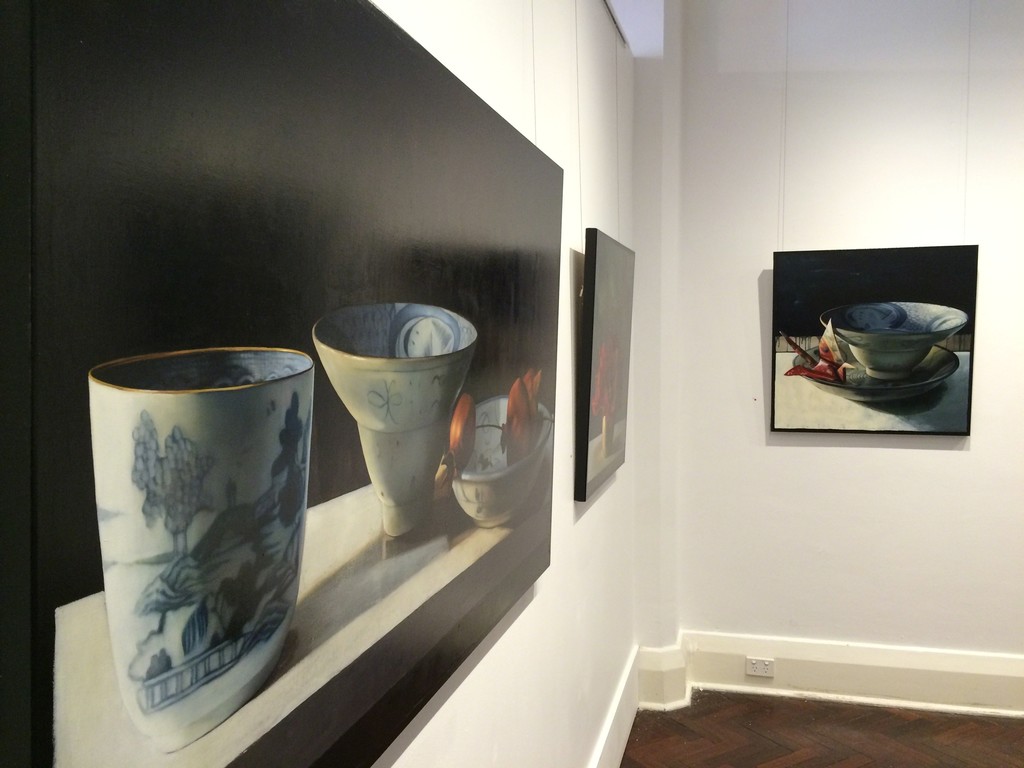 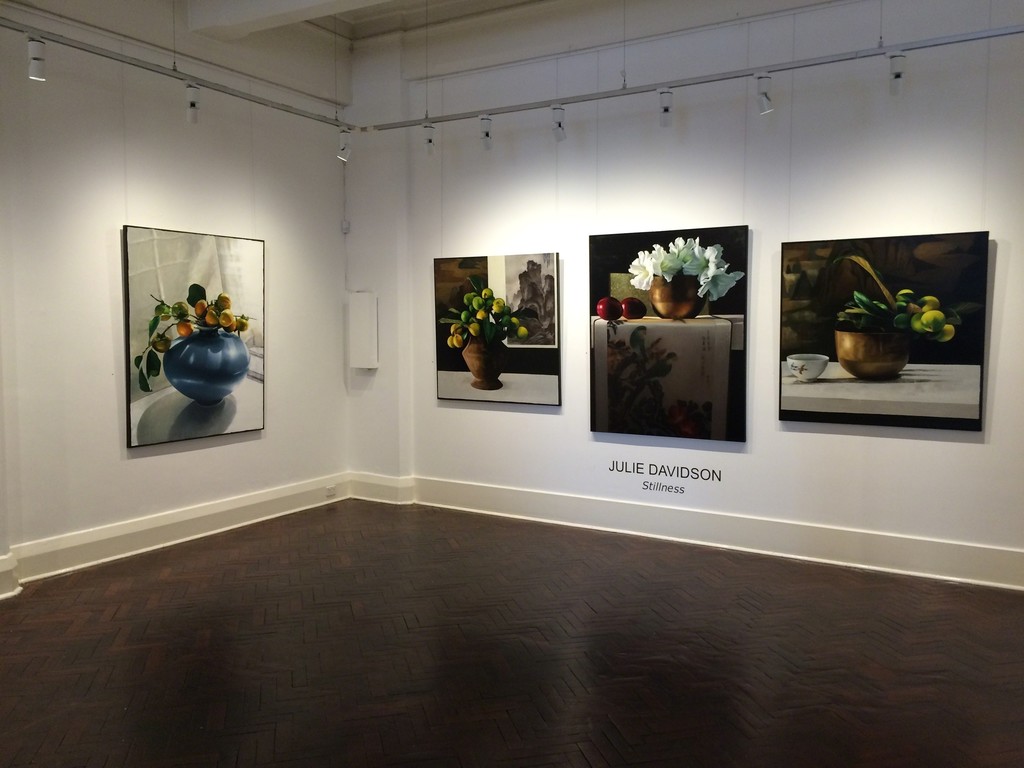 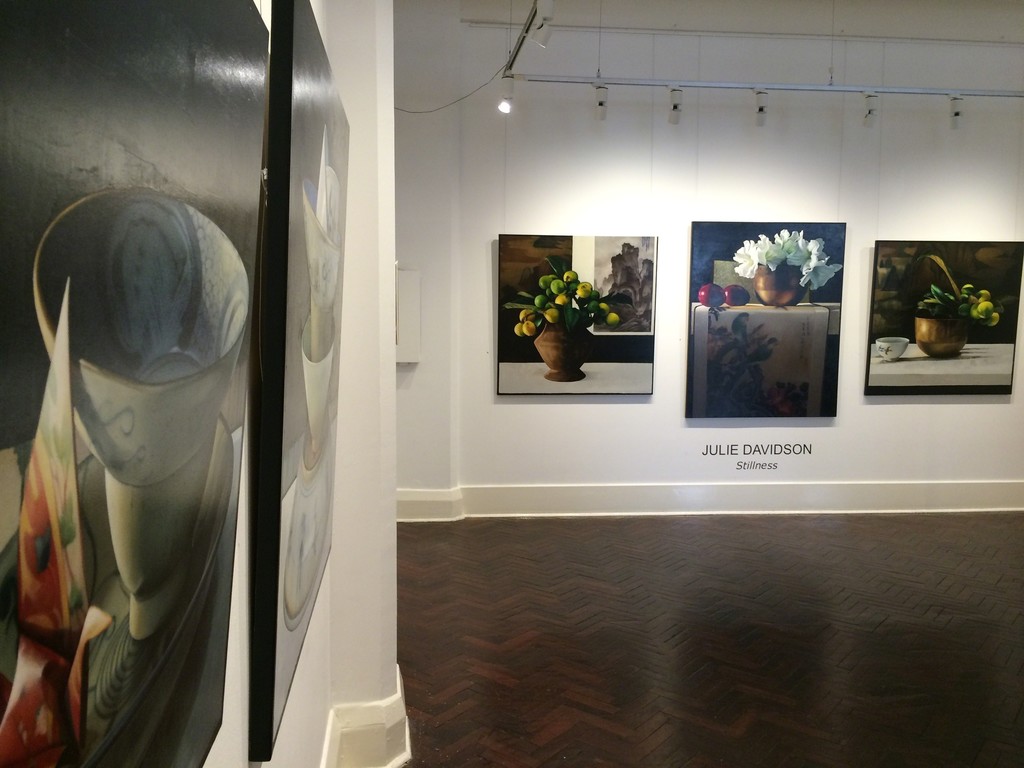 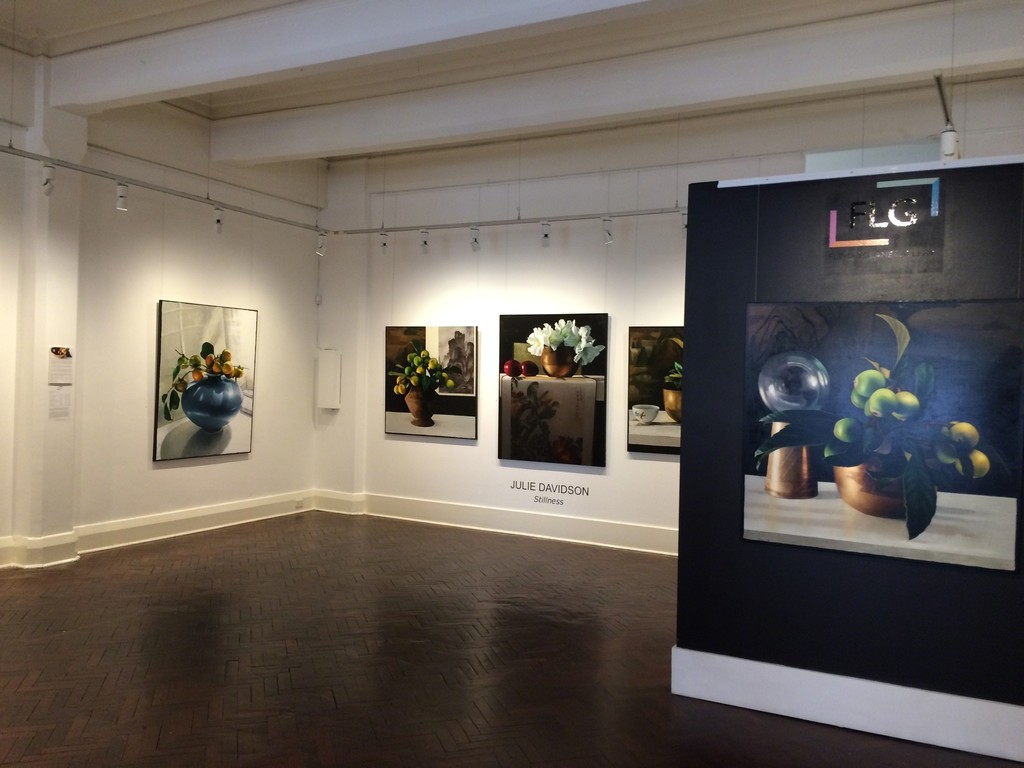 A graceful sense of harmony pervades Julie Davidson’s captivating, hyperreal still life paintings. Davidson has devoted herself to the genre of still life for a number of years, teasing out various expressive possibilities through her ever-changing arrangements. In this recent series of paintings the artist introduces man-made artefacts from China and India. These are grouped with verdant fruit or flowers in a manner reminiscent of the grand Dutch and Flemish still life painting traditions of the 16th and 17th centuries. Davidson avoids the explicit use of vanitas symbols such as skulls, an hourglass, or musical instruments, which were historically included in such works as a reminder of the futility of earthly pursuits, and that all life is passing. However like her predecessors, Davidson also seeks to evoke ideas of transience and the impermanence of life, by including plants that will soon perish alongside objects made by ancient cultures that speak to us from another time.

In framing this discourse between life and death, past and present, Davidson creates imagery with a keen sense of stage-like mise-en-scene, or theatrical design. She artfully composes her cast of inanimate objects within a shallow space, and illuminates them with strong directional light. This bright light generates a striking overall clarity, and through it she shapes the crisply defined three-dimensional forms of her plants and vessels. In certain works that feature flowers, such as Copper bowls with lilies and tamarillos, light suffuses the petals and they almost appear illuminated from within by a soft translucent glow.

While Davidson’s exploration of light is a consistent feature of her oeuvre, the introduction of ancient Chinese bowls, Chinese landscape paintings and Indian brass vessels is new to this particular body of work. The inspiration for this came from a recent trip to Hong Kong, where Davidson had the opportunity to scour the back streets of the metropolis and collect these once utilitarian domestic objects, along with elaborate decorative landscapes scrolls that hang in the backgrounds of some works. Upon returning to her studio the aesthetics of these items became a subject of fascination. For an artist who mainly works in the western still life tradition, incorporating the visual language of the east provided a layer of conceptual and aesthetic depth that had been previously unexplored in her art.

From a metaphoric perspective it is easy to comprehend why these small bowls appealed to the artist. Hand painted and humble in form and function, they bear visible markers of the passage of time, and relate to her broader investigation into temporal reality. The echoes of the past appear embedded on the chipped and marked surface of such objects, and ring through the mountainous landscape scrolls that also appear, albeit partially obscured by background shadows. Such constructed items provide an effective contrast to the live fleshiness and greenery of the plant life they are placed with, as culture and nature are arranged in harmony.

Davidson enlarges her subjects to a grand scale and renders them with a meticulous technique. Painted with illusionistic perfection all become expanded beyond reality, taking her work into the realm of hyperrealism. Exotic fruit such as pomegranates, persimmons, loquats and tamarillos are cast in vibrant warm hues, and painted in a highly resolved, precise manner. In doing so Davidson effectively amplifies reality, and imbues simple forms with a bold presence.

By drawing elements of varied origin together in the same pictorial space, Davidson creates a heady flavor of exoticism within this series. Her layering of different artistic traditions has produced a rich and visually seductive outcome.