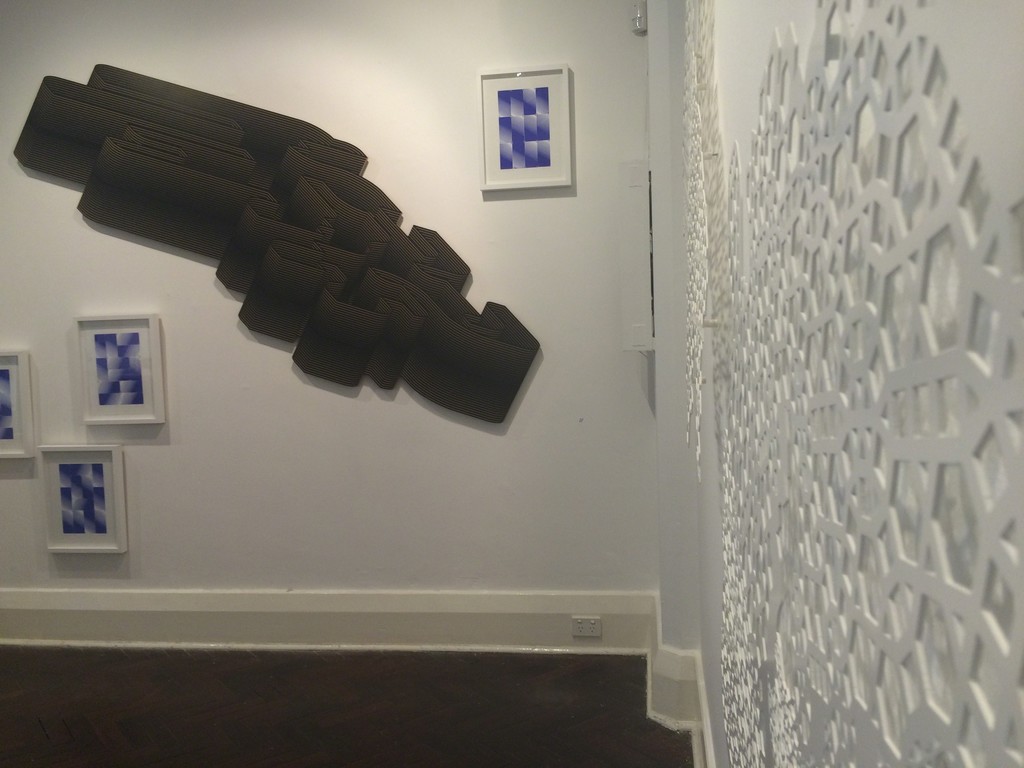 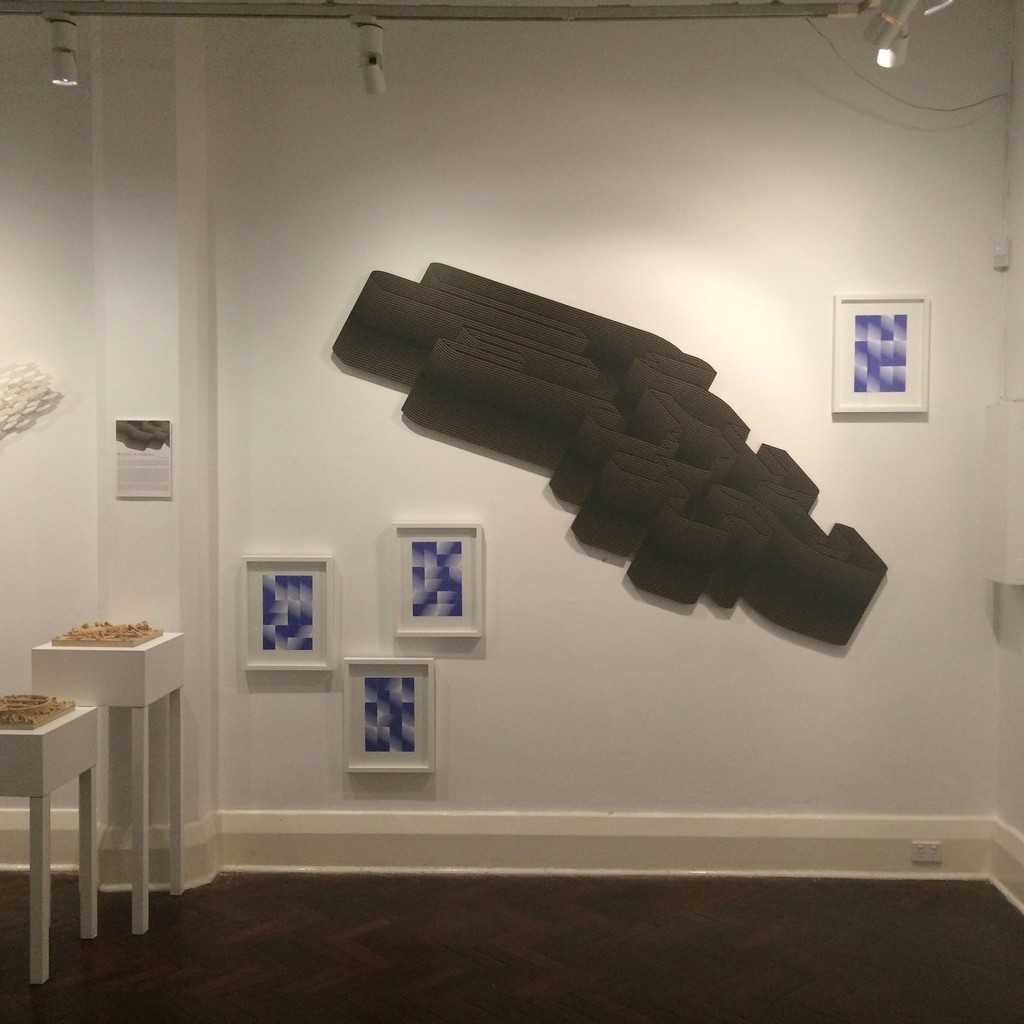 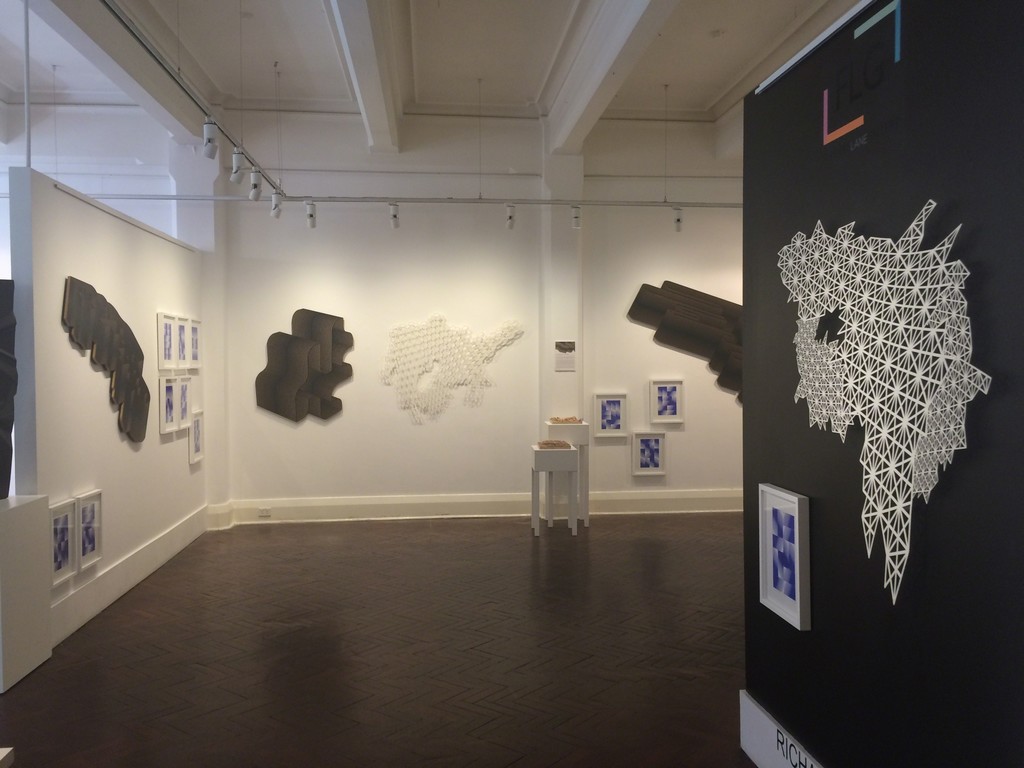 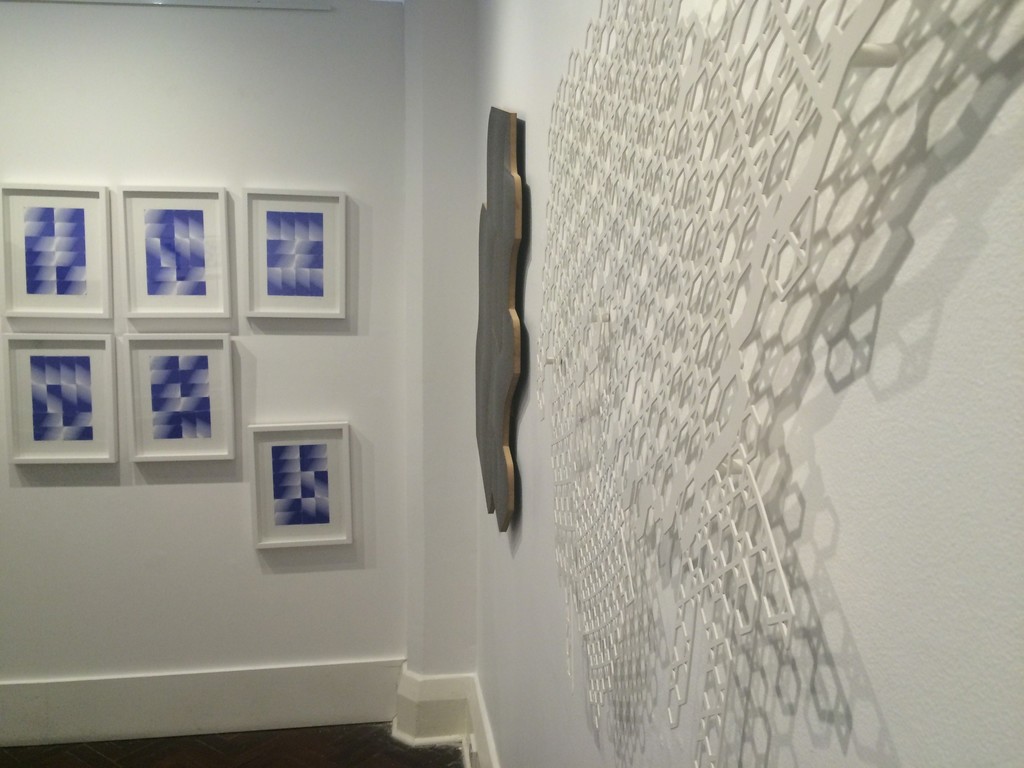 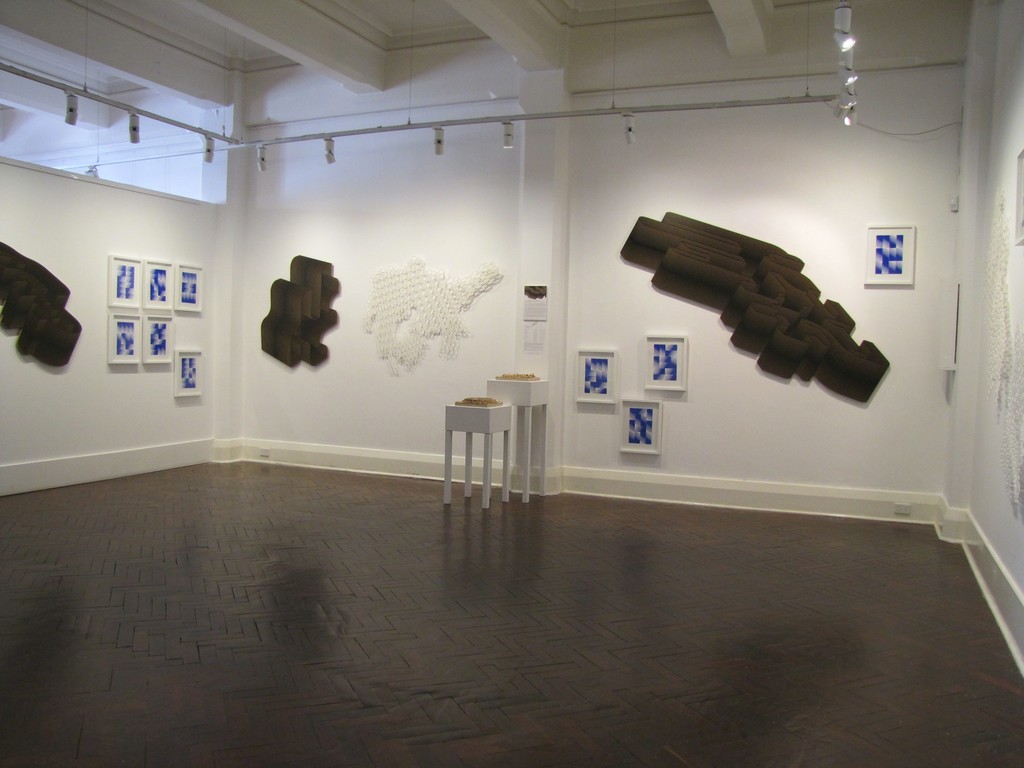 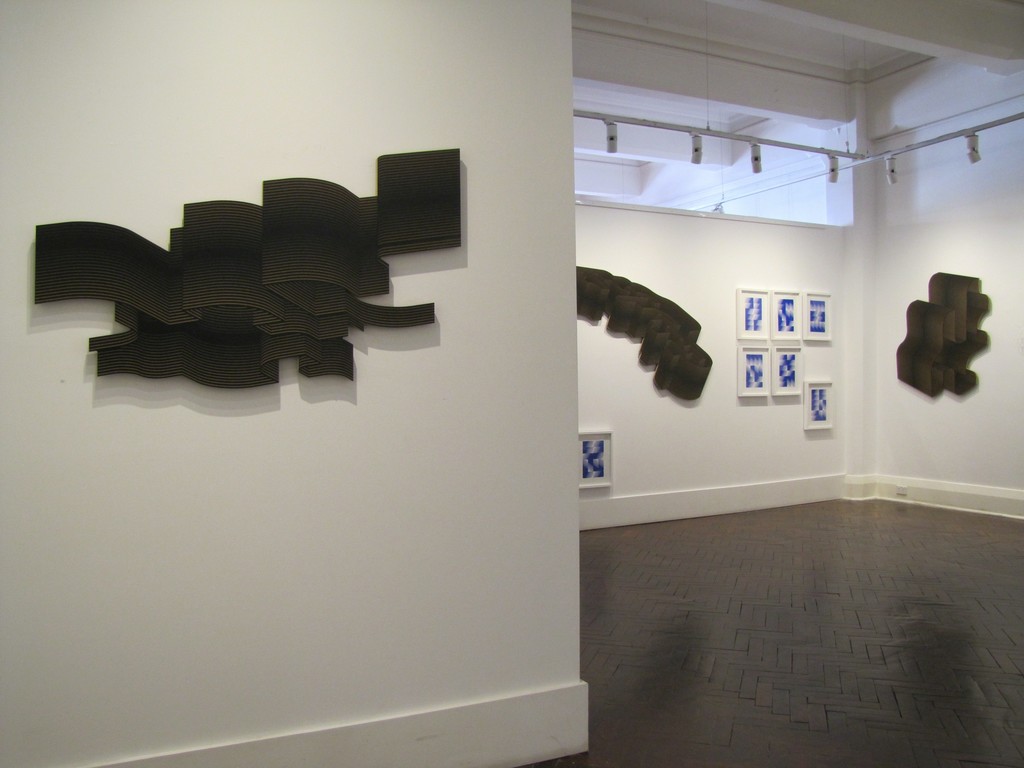 ‘For the Neue Hope series of laminate wall panels I looked at the surface of the death star - covered in a texture of turrets and generators, like an infinite citadel or suburban compound on the surface of a sphere. I also looked at Tunisian family weavings, as Tunisia is the real world shooting location of the scenes at the beginning of ’Star Wars: A New Hope’ - the part of the film that I’m really interested (the moment before the action). For the Dimensions steel wall panels I thought about the vastness of space, and about the visuals I had seen of dimensional realities portrayed as interweaving sheets. I was also inspired by the Jaali (ornamental perforated wall panels) that surround me in my current home of Doha.’

For the Dimensions steel wall panels I thought about the vastness of space, and about the visuals I had seen of dimensional realities portrayed as interweaving sheets. I was also inspired by the Jaali (ornamental perforated wall panels) that surround me in my current home of Doha.’

Blackwell is a recipient of the 2012 Fulbright Scholarship and completed his Masters in Fine Art at the School of Art Institute of Chicago in 2014. In 2011 exhibited his major series GROTTO - an exhibition in 3 volumes, which was shown in Canberra, Melbourne and Chicago, and was supported by the Australia Council of the Arts. His work has been collected for ARTBANK, NAB Collection, the Justin Collection and has been profiled in Australian Art Review.

In spite of all the optimism and hope driving the 1960s space race, much of what remains is useless junk. For every lunar module preserved at the Smithsonian, there is an equal weight of scored metal fittings, decaying sheets of Mylar, torn bits of insulation and past use-by space sticks. It is not glamorous stuff (though it has the whiff of celebrity) and mostly looks so anonymous and shabby that each piece requires a backstory before any viewer can take it seriously. In the interceding fifty years, this trash has increased and is now added to by a larger assembly of similar objects made for the film industry following their own interstellar projects from 2001 and Star Wars through to Gravity, Moon – and Star Wars again.

When an interviewer asked the director David Cronenberg how he managed to make banal items such as a telephone or carpet seem so sinister, he replied ‘No object is innocent and the audience understands this.’ Richard Blackwell also understands. The sculptures he presents here at Flinders Lane Gallery are space-world discards, the clunky progeny of an exhausted Utopia laden with history but unable to perform their original function. It is as if they have been reverse engineered from pristine robot titanium and poly-carbon back to modest timber simulacra notched by the marks of machines (ironically, the artists uses hi-tech procedures to create this lo-fi result). En route, they have been imbued with a sculptural aesthetic that has elevated the trash anonymity of the template back to their former position of regard, consideration, and even usage via their new existence as art. This is a transmutation many artists aspire to but rarely attain and in their fabrication, Blackwell has neatly side-stepped the dilemmas outlined in 1939 when Clement Greenberg argued that such processes normally lead to kitsch, that hollow reminder of former utility, a dumbing down of culture caused by consumerism. The sculptures in New Hope are able to express this new-found resonance because they have already been mediated through a series of transitions by Blackwell, exhibited first as photographs in Chicago before their translation into wood and, further, into their steel shadow-cousins hanging on the nearby walls. It is presumed inevitable that their mutant journeys will not end here.

Counter-balancing the 3D is another on-going project, Modular Reflective Surface, a grid of framed prints which have as their source an arrangement of 12 small relief plates. According to Blackwell, there are 1,150,976 possible variations and this multiplicity may be understood as a metaphor for contemporary life ‘being the result of countless phenomenological interactions and relationships that are mediated by technology, ideology and the concrete structure of the built environment.' The subtle tones and shades in each print are like fingerprints, unique to each yet confounding in their diversity not unlike William Blake’s revelation of whole worlds contained within a single grain of sand.