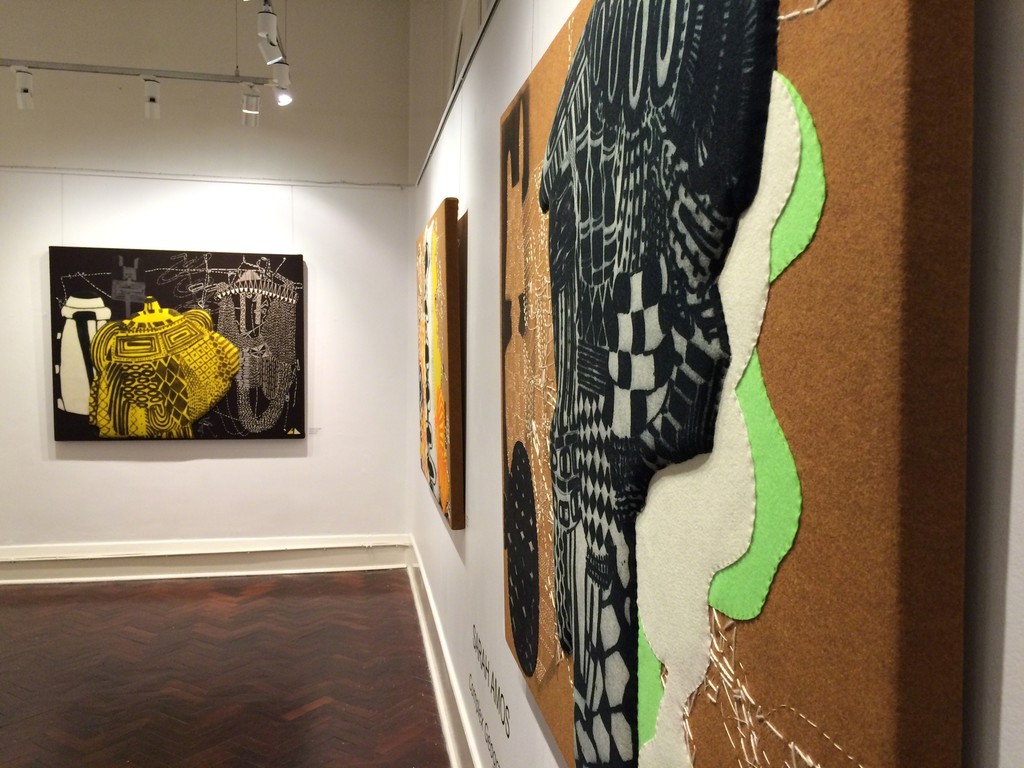 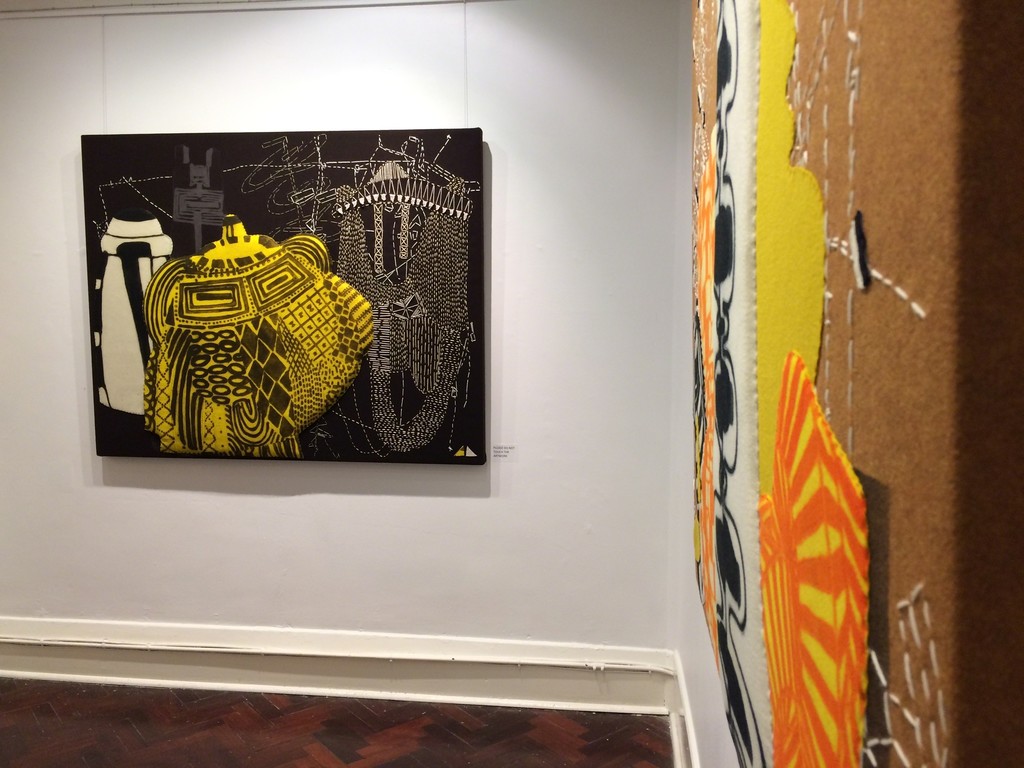 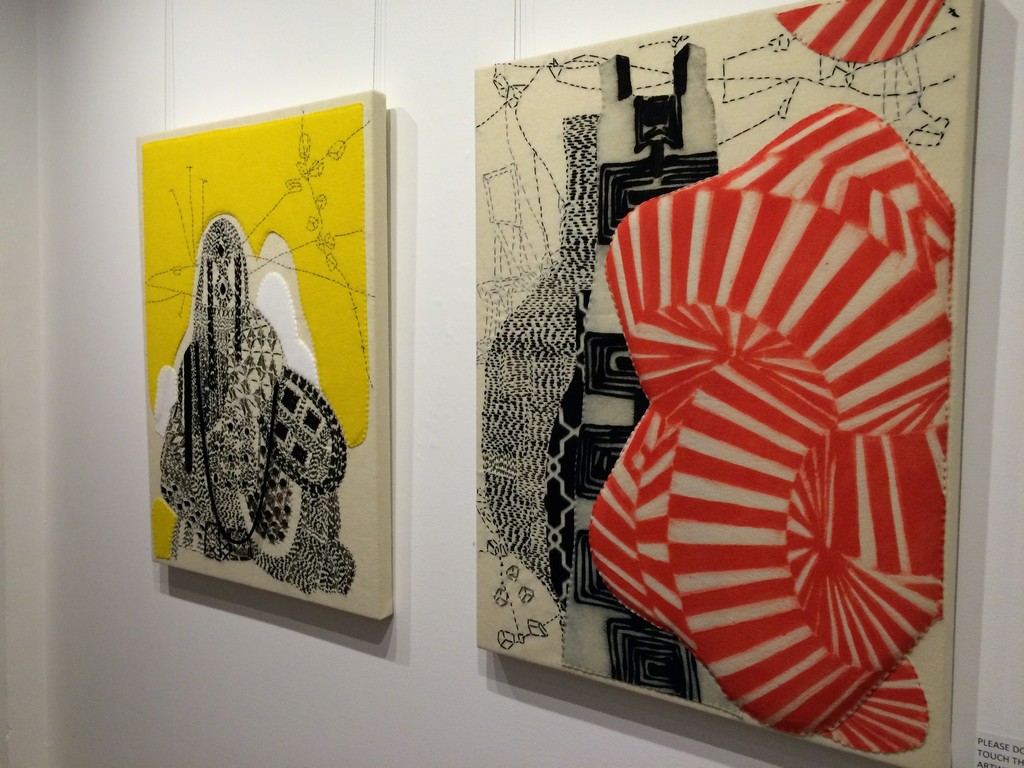 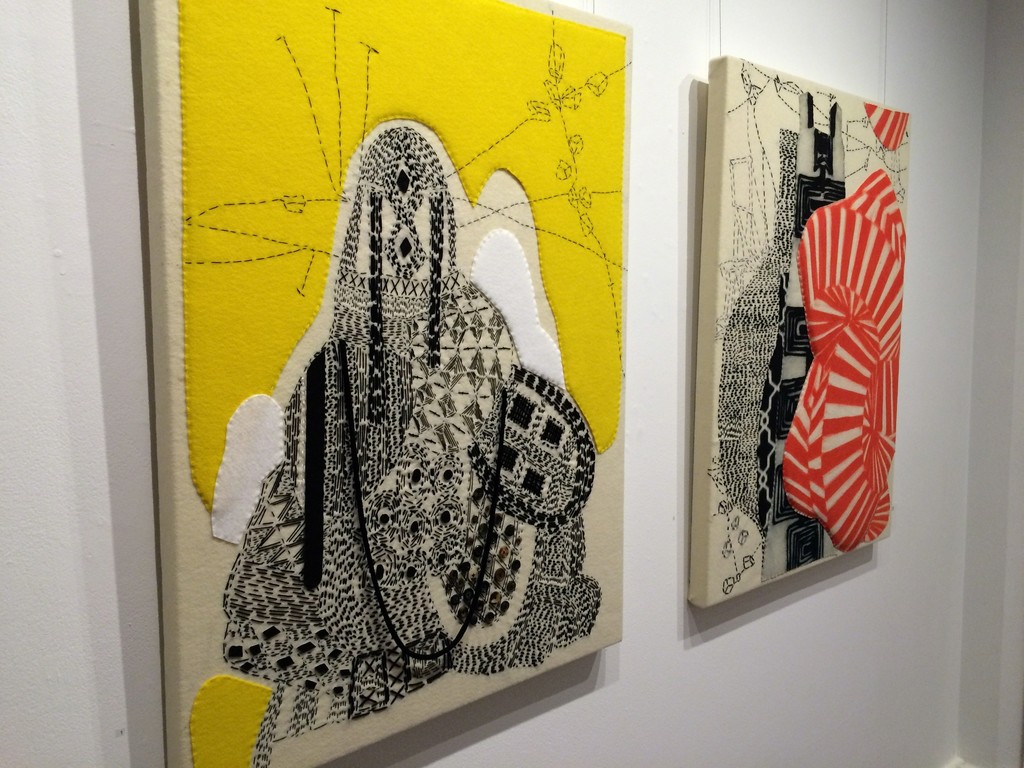 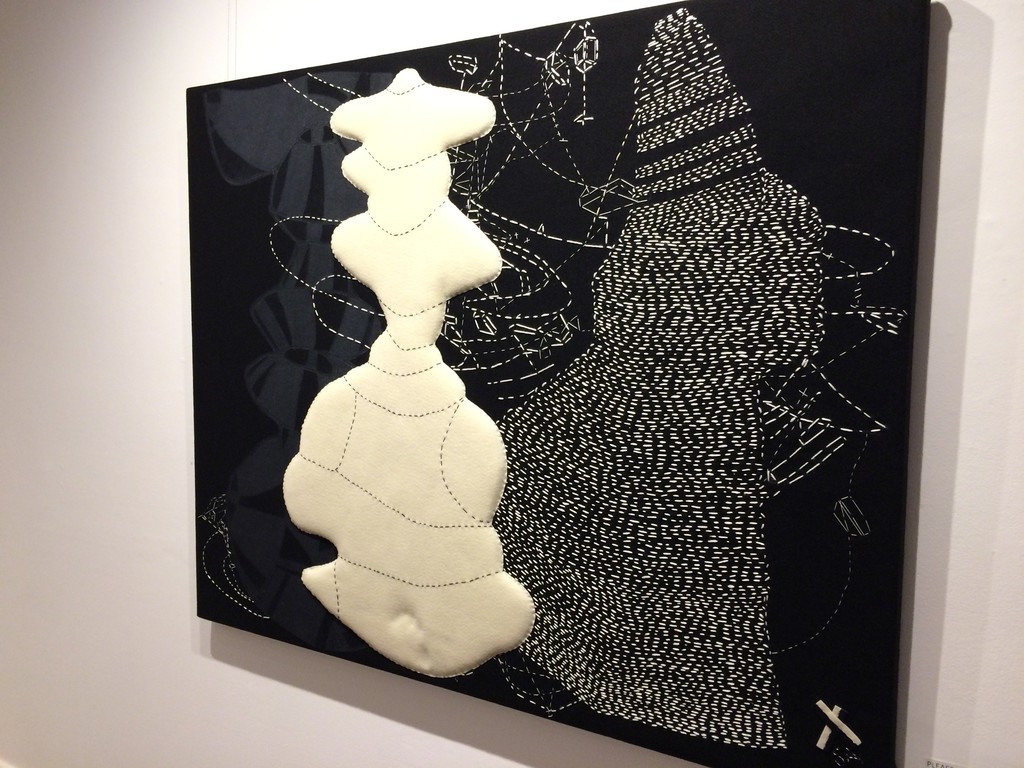 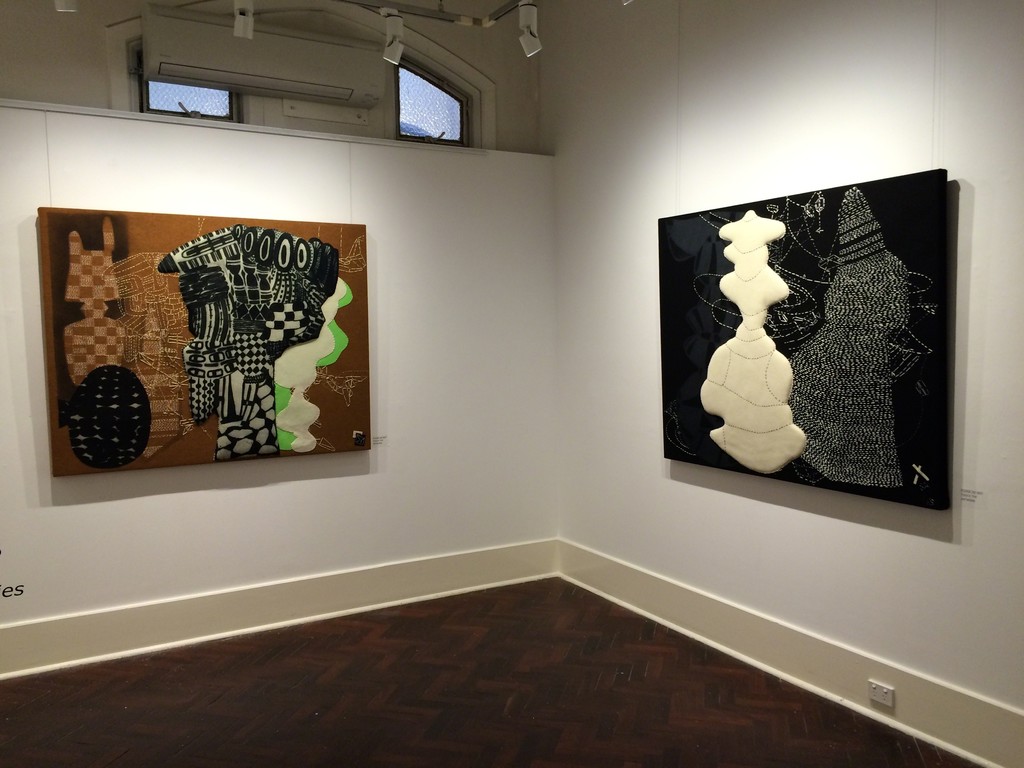 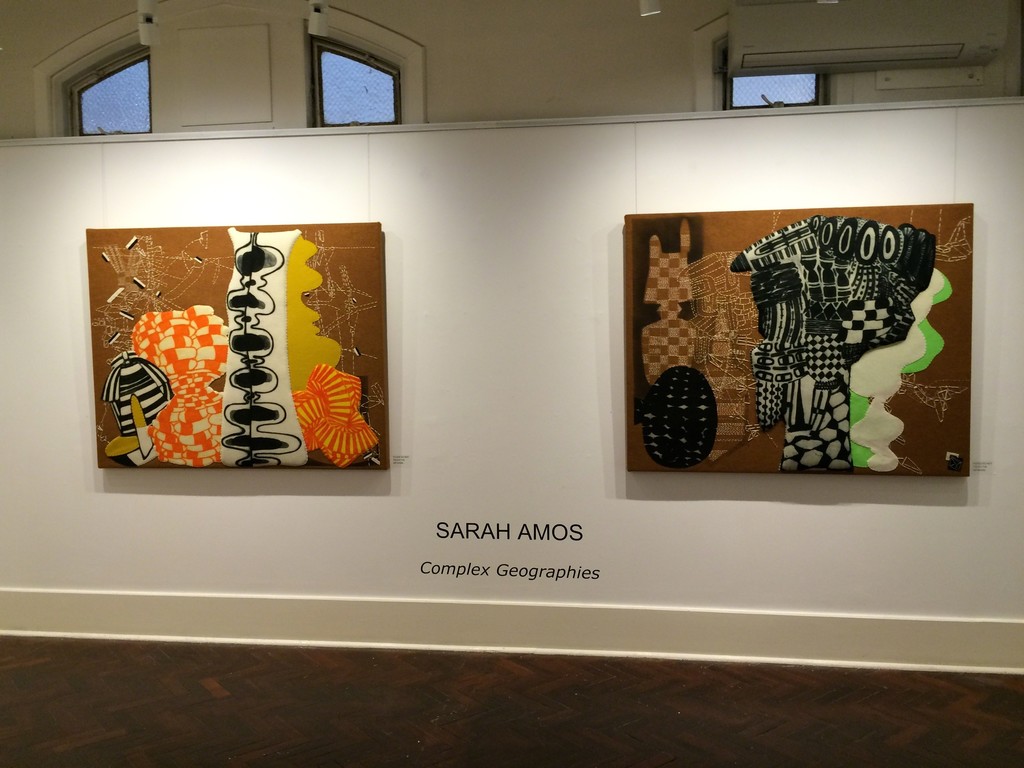 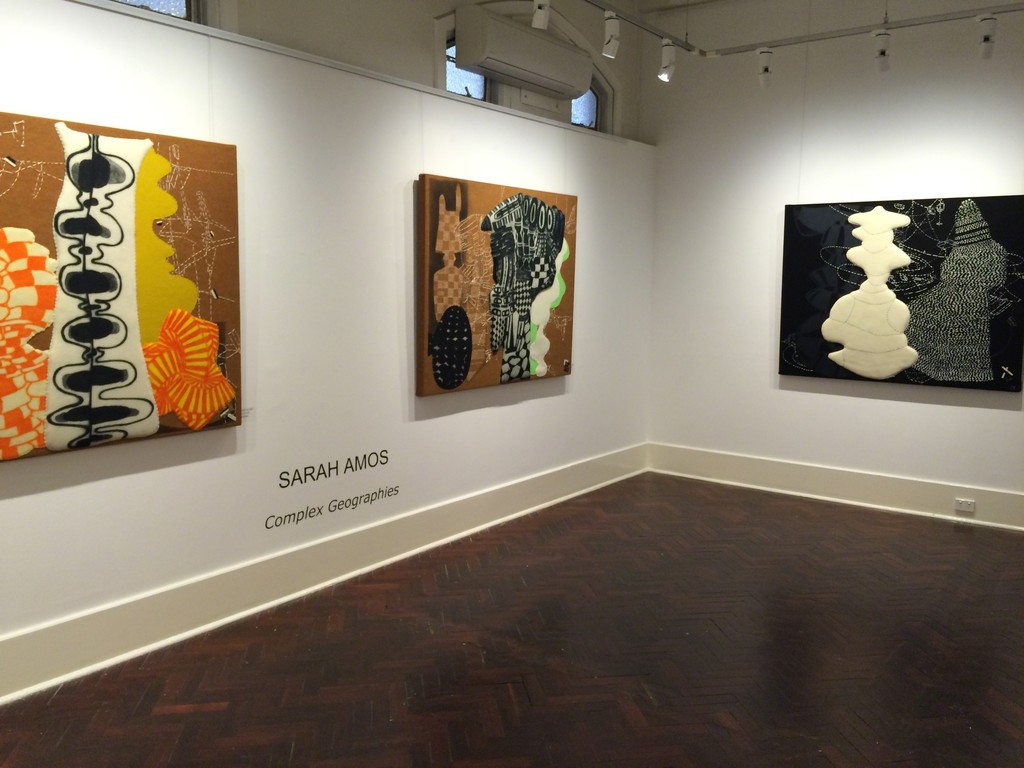 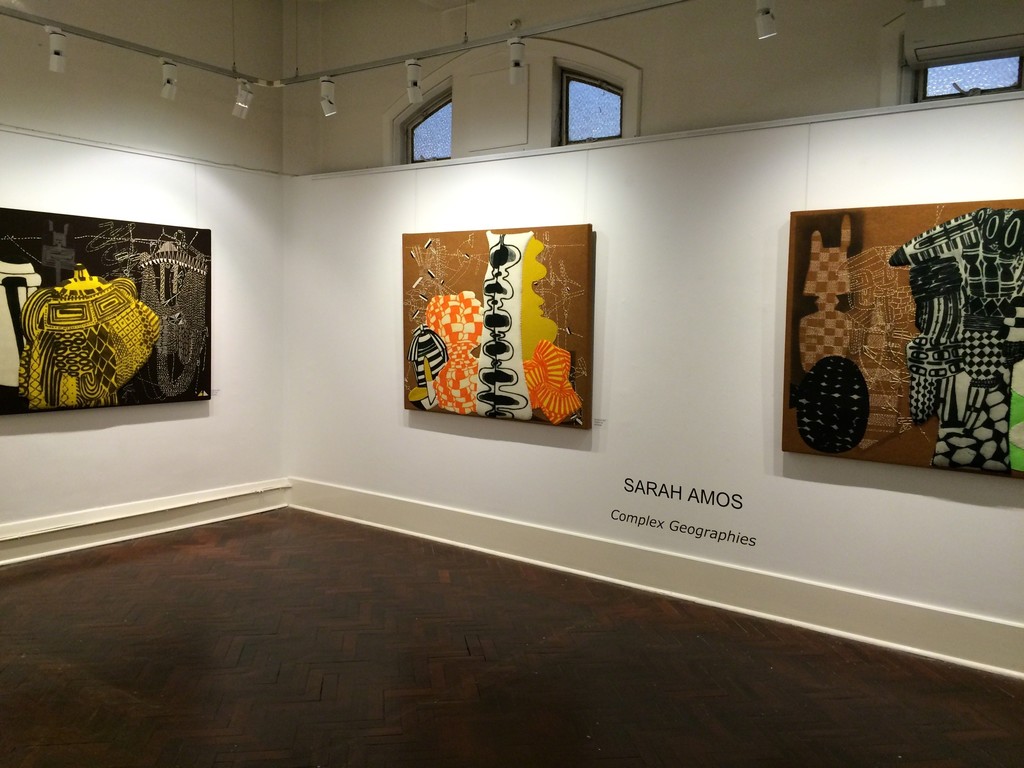 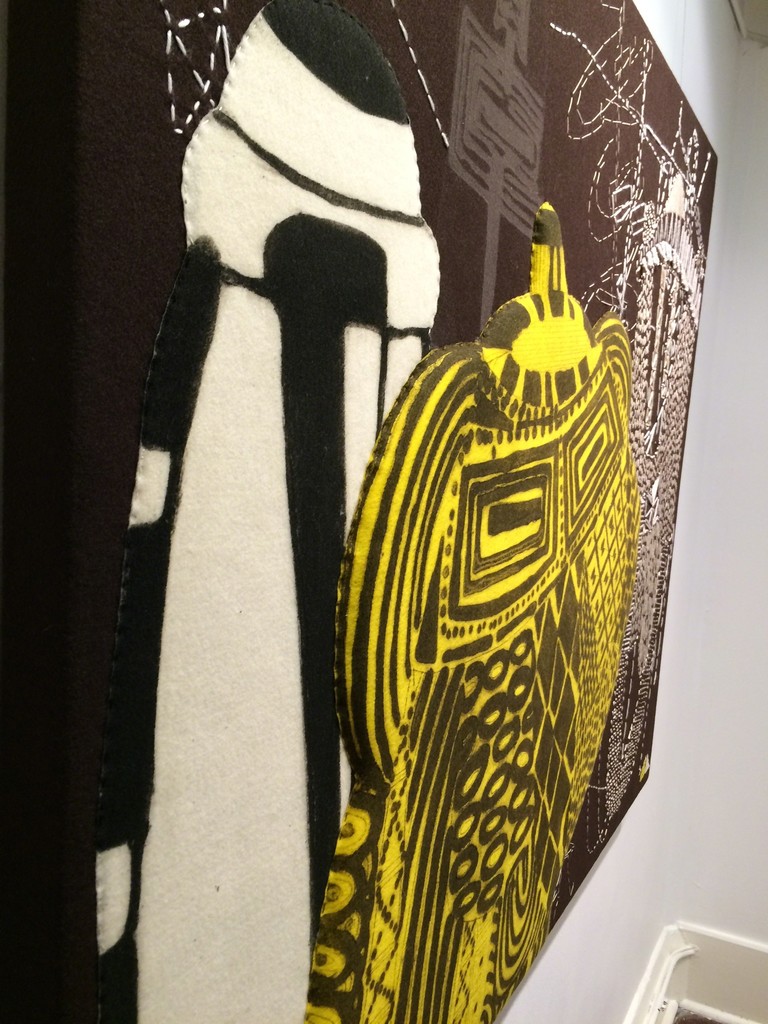 One key element of Amos’ artistic approach is her penchant for mark making—she has spoken of her compulsive need to produce art as a means of comprehending the world around her. Printmaking offers a host of options for mark-making and layering that are germane to Amos’ artistic concepts. She culls from an arsenal of techniques, but primarily exploits the linear and tonal passages she can create with carborundum etching and the multi-level built up and recessed surfaces and diverse textures of collagraphy. She will also use multiple passes through the press to attain the desired effect.

Her attraction to printmaking lies less in its ability to make multiple editions of a completed image than in the specific aesthetic effects different methods can produce. Although she has made some painting studies on canvas, her strong preference for the textural variety and subtle overlays of imagery that she can achieve by combining printed elements with painted, drawn, stitched or other hand applications to produce unique works prevails.

It is compelling to view the insistent mark-making aspect of Amos’s work in relation to some of the patterning and shapes that occur in the dirt drawings, body and bark paintings, and other art forms used by the Aboriginal people of Australia in place of written language to relate their creation stories. In particular the banded spirals and concentric circular or ovoid shapes used in Aboriginal art to symbolize waterholes and rock holes, respectively, would seem to resonate with some of the forms that appear in Amos’ work. But perhaps most intriguing is the comparison of the artist’s sequences of dotted lines with the Aboriginal use of dot patterns to obscure symbolic imagery to keep the information secret from those unable to decipher it. Whether intentional or not there seems to be a connection between this method of concealment in the Aboriginal context and Amos’ interest in exploring how cultural histories are visually manifest but are often buried or go unnoticed. The broader association of dotted lines with tracings of what had been or what might yet be in diagrams and blueprints further enriches the correlation. Further, one should note the commonality of dotted line work and other repetitious mark-making among a variety of art practices of indigenous cultures that have captured Amos’ imagination, such as African and New Guinean textiles and artifacts, Japanese prints and Sashiko embroideries, among others. The universality and interconnectedness of this human impulse is also significant to the world view Amos seeks to convey in her unspecified landscapes.

One cannot help but consider another chief aspect of Amos’ approach to art making as at least partly tied to her nation of origin. Her proclivity for working on a grand scale is hard not to see in relation to the vast open regions of Australia. The fact that her grandfather was a highly regarded mural painter may also have influenced her sensibility for large formats. Regardless of the impetus, the size of Amos’ work undoubtedly enhances the evocation of landscape and the viewer’s experience of an environment. The edge-to-edge imagery, more common to paintings than prints, further suggests an extension into the viewer’s world. However, the spatially indeterminate settings in which Amos’ forms reside range between earthly, subterranean, cosmic, or even undersea realms—the latter two suggested by the dark backgrounds of works like First Bounce or Middle Point—imparting a sense of timelessness and universality to the imagery.

While the artist’s most recent work certainly shares some of the same visual vocabulary found in her earlier projects, there is an increased physicality evident, due in large part to her expanded use of fabrics (canvas, hemp, jute, hemp, and felt), stitching and the addition of padded forms that literally rise from the surface. One of Amos’ great strengths is her ability to continually experiment and improvise, challenging herself to achieve new aesthetic goals. Having struggled to pair large sheets of very expensive paper, mounted to canvas to reach the scale she desired in her work, she stumbled across a large bolt of inexpensive felt at a fabric store and realized that the dimensions would perfectly suit her needs.

Luckily the mixed synthetic content of the felt made it highly receptive as a printing surface and opened the door to alternative formats. She had already begun to add collaged elements to her surfaces but the use of felt instead of paper as the primary support led her to diversify her mark-making through stitching, adding forms that were printed on and cut from other materials, and building up dimensional elements with batting. Her intimate knowledge of the accumulative process used to create collagraph matrices undoubtedly informed these experimental approaches.

Also notable in Amos’ new work is the appearance of bulbous and figural forms evocative of vessels from various cultures (Top End, The Narrows, and Paradise), jelly-fish or mushroom-like organisms (Middle Point, Jingli and Thunder Egg), or, in the case of the bright orange-striped entity that stands out in sculptural relief in Top End, an exotic faceless figure in a hooded costume suggestive of a Japanese warrior or actor whose wide sleeves envelop his clasped hands (though a more mechanistic reading of this figure is also plausible). The abstracted inhabitants and visual vocabulary of the artist’s implied prehistoric/futuristic landscapes are ever evolving, and have been presented from perspectives that range from map-like overviews to excavated strata to immersive environments. The hybridity of Amos’s art is integral to her creative expression. Culling from the aesthetic characteristics of printmaking, painting, drawing, collage, embroidery, tapestry, and other media, she successfully grapples with the complexities of the constructs of “landscape” and the natural world in her boldly ambitious and delightfully engaging compositions.