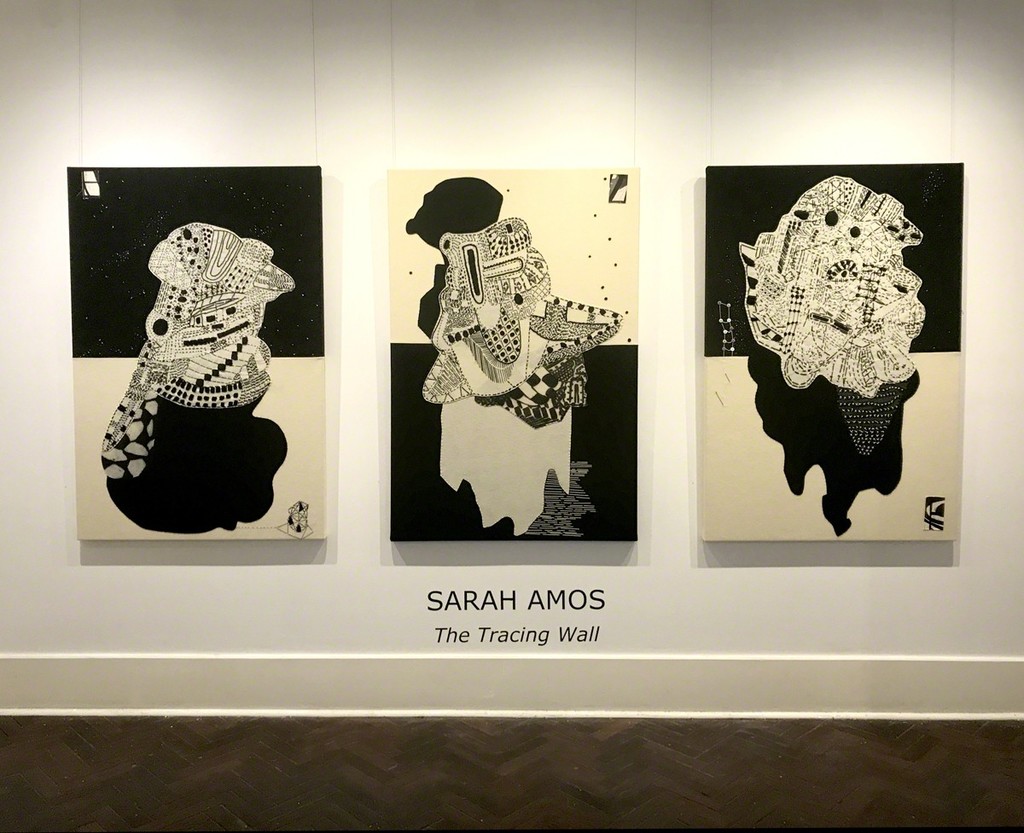 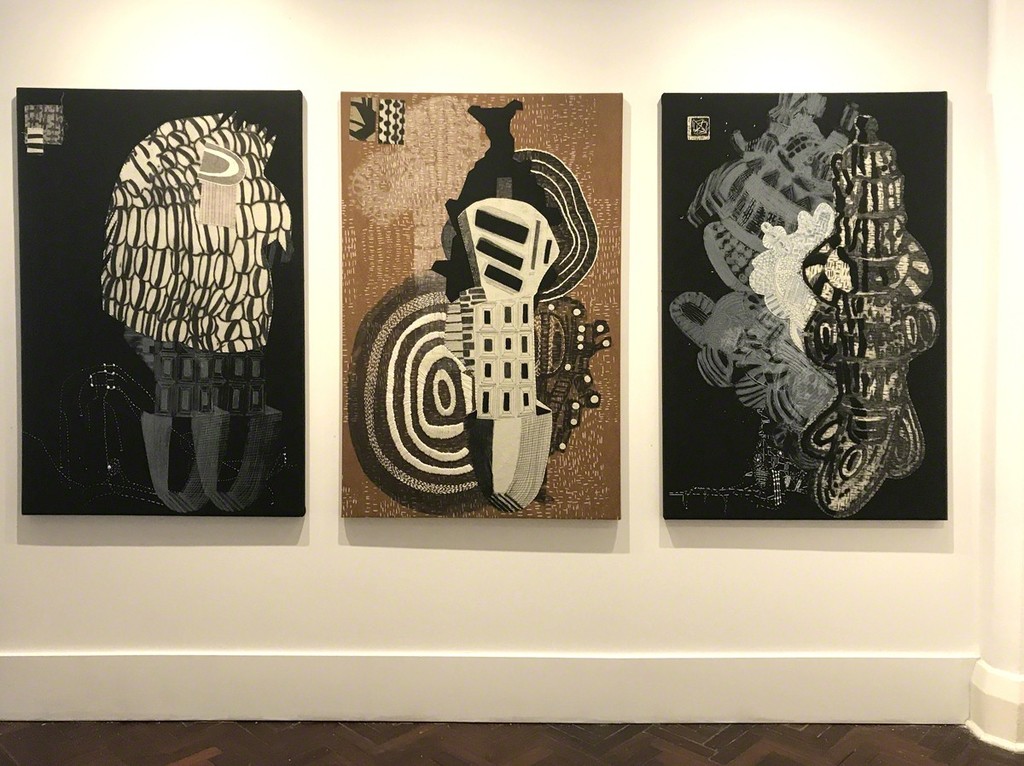 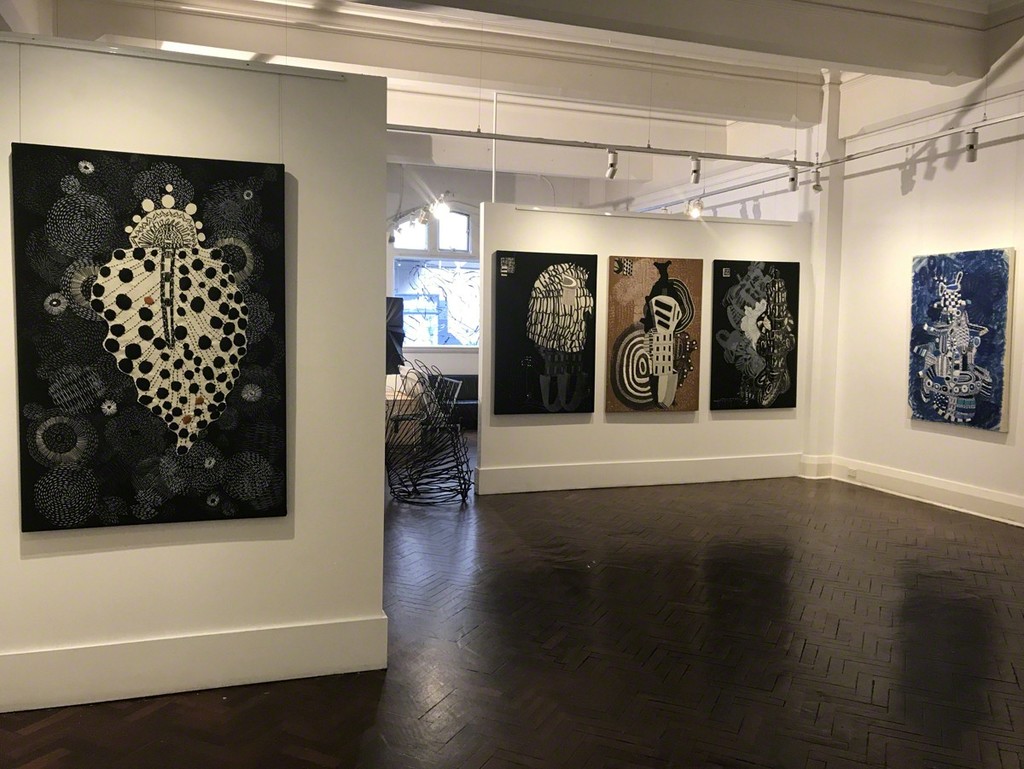 Exhibition Catalogue by Andrew Gaynor
In her new and accomplished body of work, Sarah Amos straddles the difficult divide between high art and domestic textile decoration. A master printer, Amos has recently changed direction to allow more time for her processes to gestate and evolve. In 2014 she was awarded the prestigious Joan Mitchell Painting and Sculpture Award (named after the American Abstract Expressionist painter and printer) and soon after, had an inspiring studio built for her by her carpenter husband, a light-drenched refuge looking out onto the forests of North Vermont where they both live. Whereas print-making can become a rapid process of reproduction, Amos now felt the time was right for her to slow down her output and concentrate on the slow and meticulous labour required to create the pieces now on show here at Flinders Lane Gallery, some of which involve nearly 12 months of work each.

The increased scale of her studio also means that Amos can now hang the works in their entirety and accurately assess their progress as she works. Printing still has its place in her oeuvre but currently acts more as an armature to the resultant pieces which are then brought to fruition through an array of traditional and contemporary stitch methods. Calling herself ‘a visual archaeologist’, Amos is deeply inspired by the textiles found in indigenous and ancient cultures, and by the psychological power inherent in masks from Africa, Asia and, in particular, the American Mardi-Gras Indians who wear flamboyant and embellished full-body costumes hand-crafted from beads, textiles, feathers and other accouterments. For Amos, ‘embellishment as camouflage, both physical and emotional (when) in the employ of ritual and ceremony, is an ongoing fascination.’ On seeing these works together, the anthropomorphic shapes coalesce into silhouettes of shamanistic figures and their alternating poses develop a choreography of pride and presence. They strut, they pause, they envelop the viewer – but they also vanish within their making, spectral beings of haunting power and majesty.

In Australia, as in the Americas and Europe, there has been a resurgence in the handmade and the folkloric but harnessed to the conceptual objectives of fine art. Happily, this renaissance is not gender specific which allows for a fascinating reinterpretation and celebration of these otherwise derided techniques. In Amos’ case, the detail in her hand stitching is as richly embellished as the original source costumes but is also informed by a wide variety of other techniques, most notably the Holbein stitch, named after the Tudor Court painter whose portraits of the Royals and their ladies featured acres of this embroidery. 1 Amos alternates sections of Holbein with varied stitches favoured by indigenous cultures, augmented further by her own inventions. It is a precarious strategy, this fusion of high and textile arts, and many fail as the medium can overwhelm the attempt, leaving a decorative, indulgent surface and little else. In Amos’ skilled and intelligent hands, this does not happen. They are (and remain) tough works, rigorous and considered, full of physical presence, graphic punch, theatricality and psychological impact.