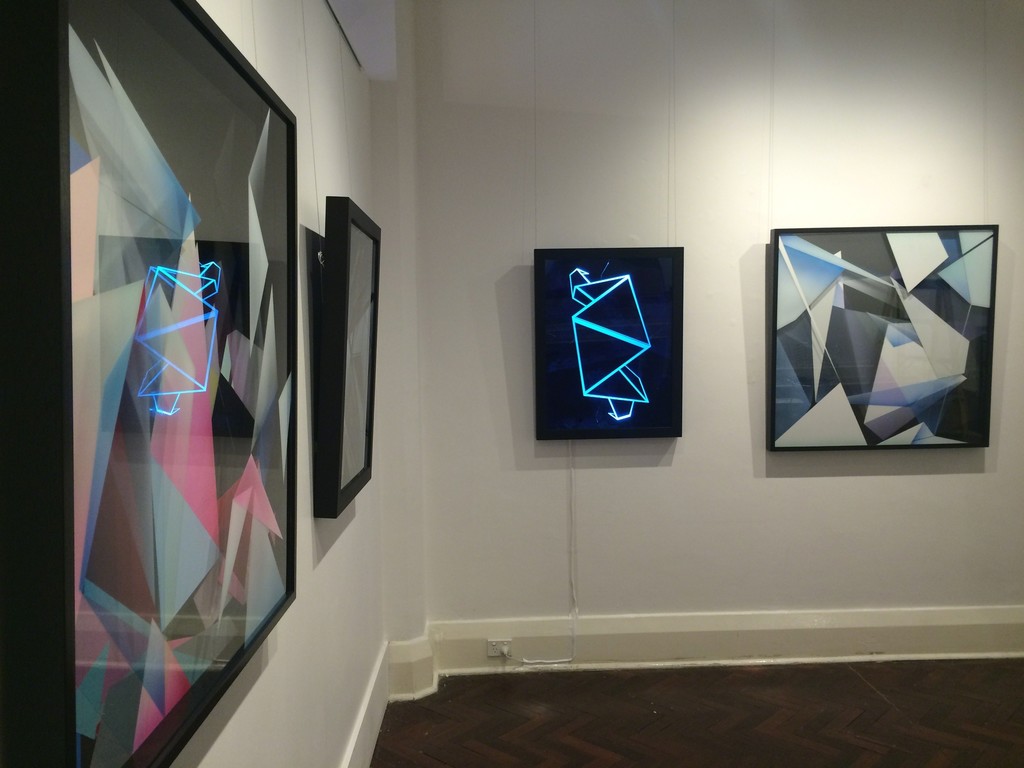 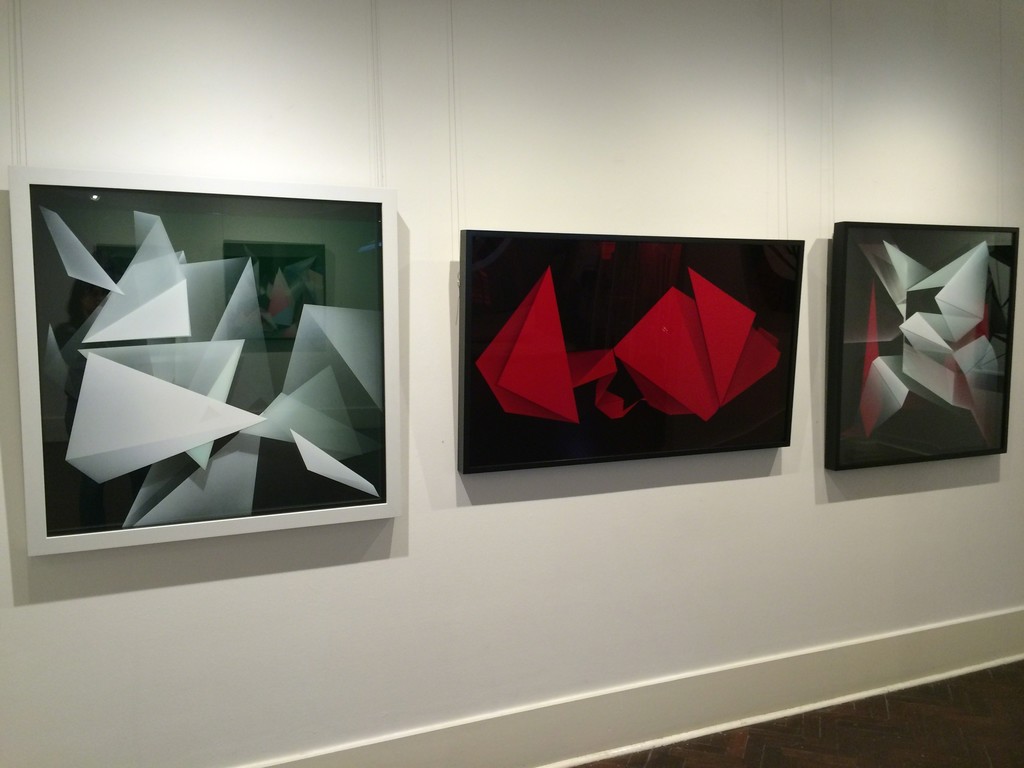 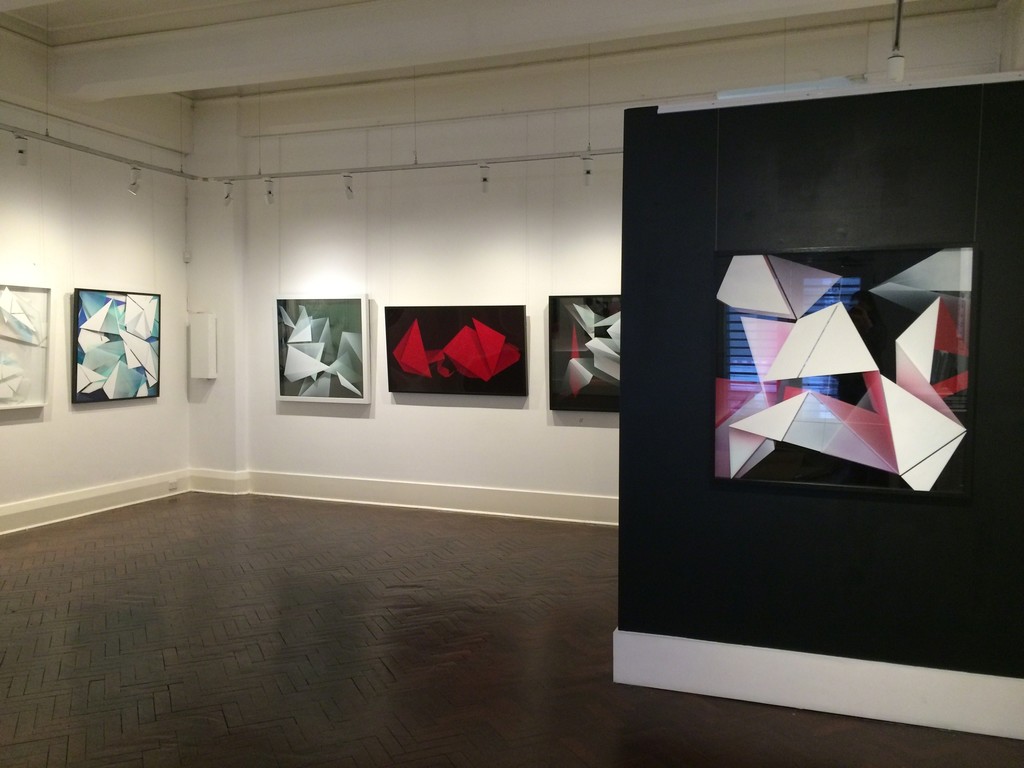 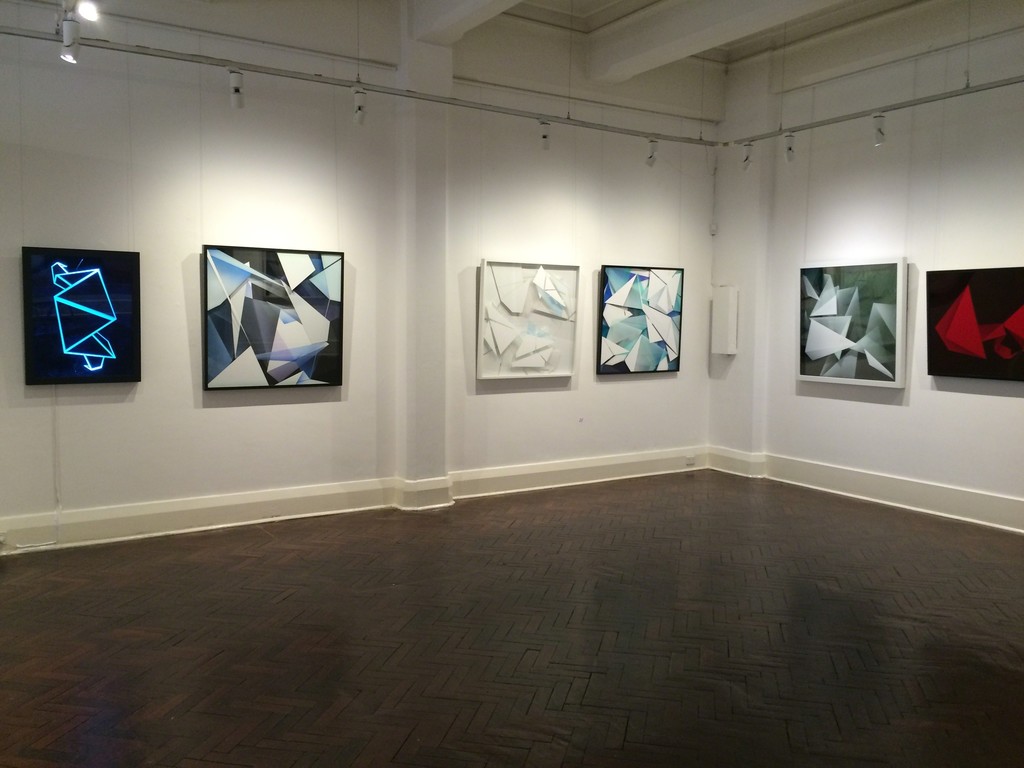 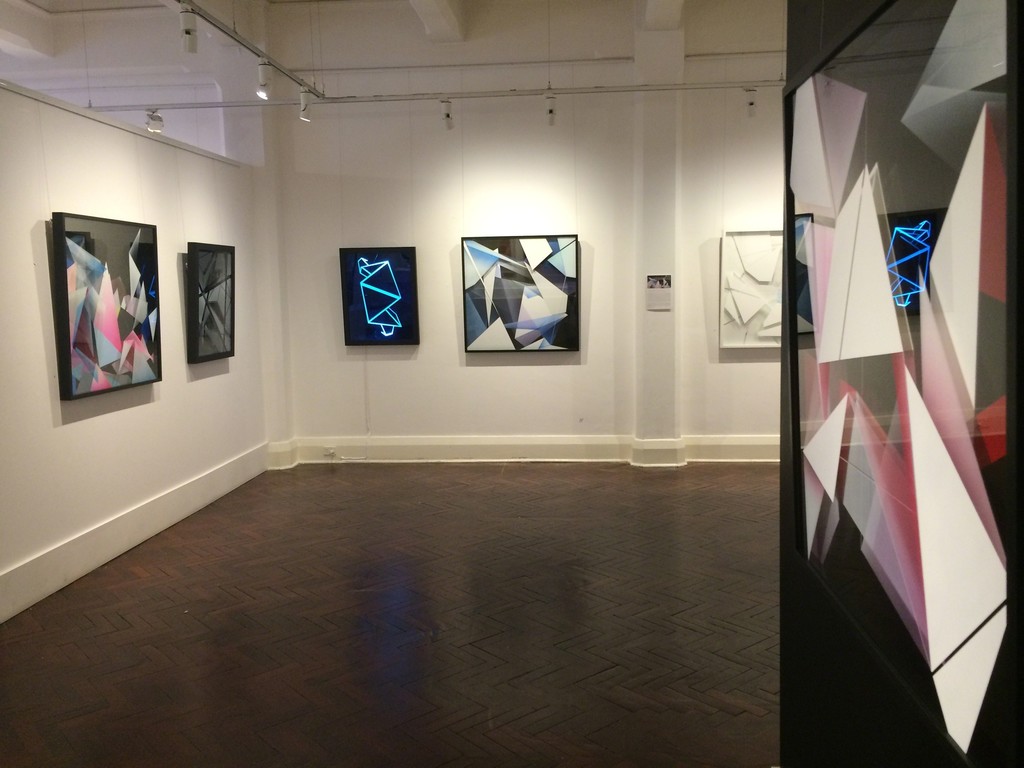 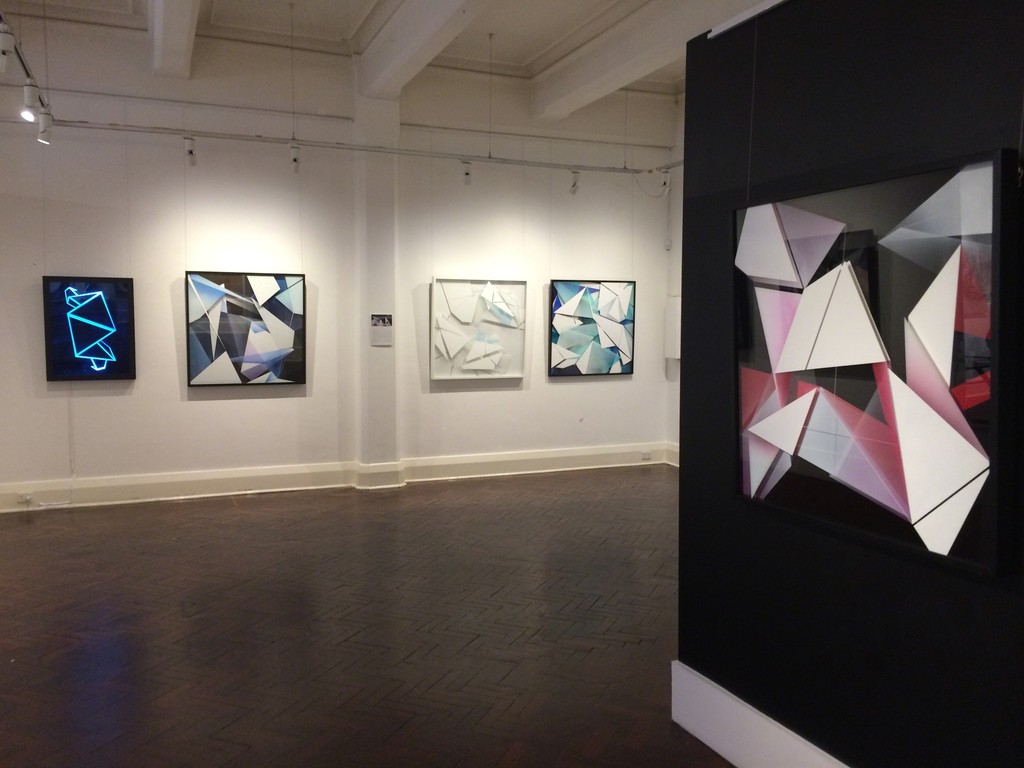 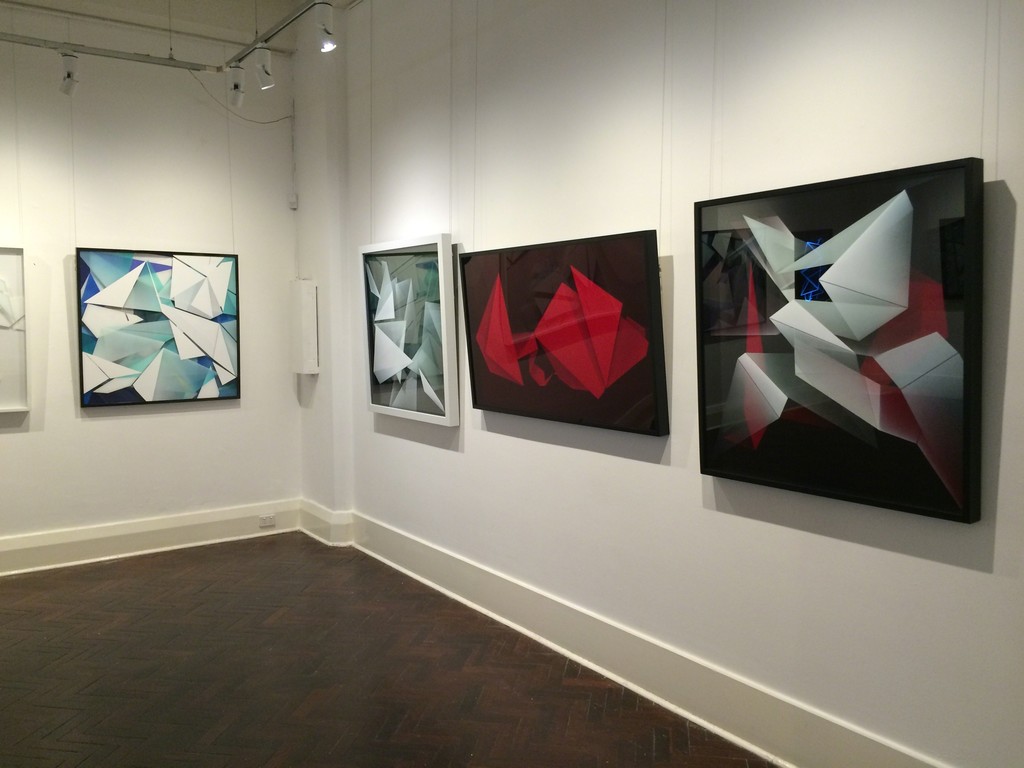 Koukoravas produces unique and meticulously-constructed pieces that are characterised by light, depth, shadow and space.

Embedded within his practice are a diverse range of cultural references including graffiti, electronic music, architecture and our relation to natural and urban environments. These thematic undercurrents mean that his work is at times provocative, challenging notions of the status quo by forcing the viewer to consider and reconsider their positions.

In his recent paintings, Koukoravas has utilised a range of spray-painting techniques on multiple sides and layers of glass and acrylic sheets to create striking geometric configurations that play with refraction. His luminous paintings give the illusion of three-dimensional depth because the flat application sits on different levels of glass and acrylic panels. Building on the series he exhibited at Flinders Lane Gallery as part of Exploration 13 and Visualised, his new works continue to layer panels to create complexity, multiplicity, depth and illusion.

Koukoravas gambles with the dichotomy of order and chaos whilst experimenting with abstract forms and randomness. This experimentation has resulted in Supermodified, a series of pieces that push the boundaries of the materials he uses while exploring processes of aleatoricism. To create the Supermodified series, Koukoravas has rolled the dice and relinquished partial control of his creative processes to chance. Supermodified is diverse a series of pieces showcasing innovative techniques applied to glass and acrylic panels in paintings, light boxes and multimedia.

Non-objective art utilises geometry, shape and colour as three key elements with which to create. As its name implies, there is no attempt at naturalism or recreation of a recognisable motif from nature but it is not unusual for the non-objective artist to use the material world as inspiration. Music, geology, roadworks, shadowplay and light – all of these have been cited as source material but the key difference is that the result does not attempt to recreate the subject in literal terms. Instead it is the balancing act of geometry, shape and colour which is employed to suggest tension, spatial relationships and mood.

Significant artists in the 20th century who pursued these ideas included Mondrian, Malevich, Kandinsky and Rothko, and each believed their theories provided a new possibility for art and a method for depicting the underlying armatures of the visual world. Zac Koukoravas draws his own inspiration from these predecessors then builds on their arguments with a variety of personal trajectories. Originally a street artist (included in the seminal publication Kings Way), Koukoravas had a natural fascination for graffiti’s layers, textures and tonality which he extended into a sequence of symmetrical abstractions during his student years at the Victorian College of Arts. During a discussion on chaos and order, his lecturer Elizabeth Gower introduced him to Michael Taussig’s book Which Color is Sacred? and through this, Koukoravas began to understand that overly symmetrical works tend to be about control and formality leading to relatively banal works that are easy to digest – and just as easy to disregard. Far more compelling are those where the purity is disrupted noting that the eye is naturally drawn to points that disrupt a rhythm, such as a broken link within a chain. Taking this on board, Koukoravas has spent the last decade exploring the dynamic possibilities of asymmetry with results that are far more open, intriguing and animated. He originally worked solely with glass but since has alternated with acrylic panels as a mount due to concerns with weight and fragility. This may seem a simple transition but it has in fact created an increased range of complexity due to the unforgiving nature of acrylic. The porosity of glass allows for a lot more modification during the creative process whereas acrylic is stubbornly resistant. One false mark can destroy the whole work causing Koukoravas to develop his own nuanced yet disciplined technique which is given full reign in the exhibition Supermodified.

As the title implies, something has been changed and time has moved on. Koukoravas takes long contemplative walks with his dog Pepper and inevitably notes the cycles of decay and renewal, especially in the falling trails from the Stringybark tree. He also listens to the sounds buried within discordant (‘intelligent’) dance music, one he humorously describes as ‘broken-robot-music’. These divergent inputs manifest themselves as complex geometric designs based on folds which both conceal and reveal. By using both sides of the glass and acrylic panels, his paint application (using airbrush, spray cans, brush and rollers) off-sets crisp, bold passages with moody, even murky shadow forms which, like life itself, imply a darker sensibility under the parade of otherwise bright colour.