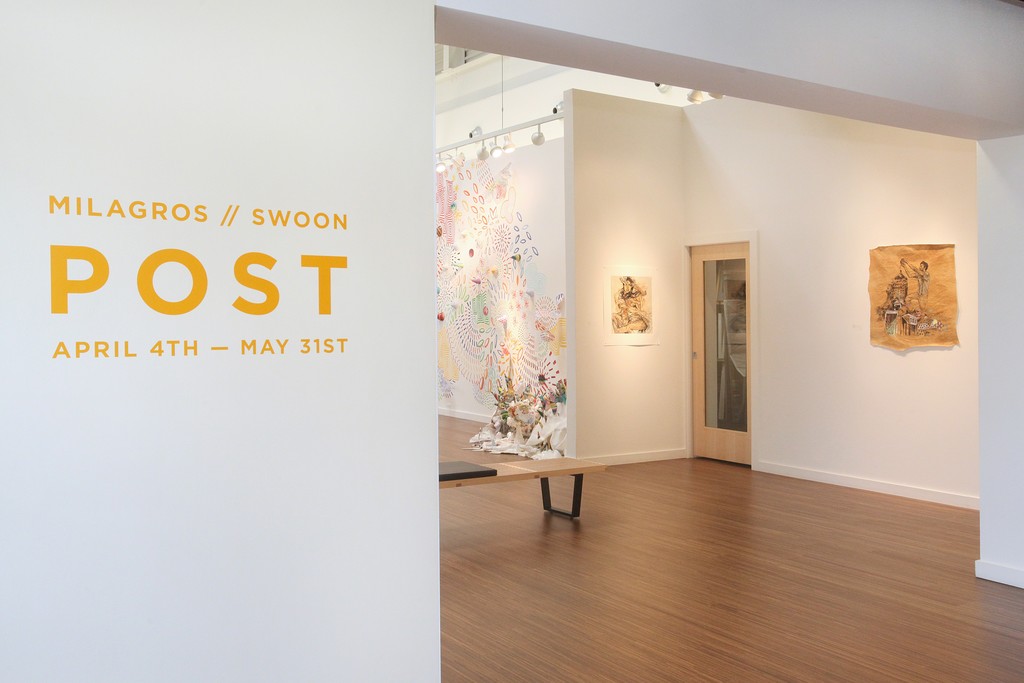 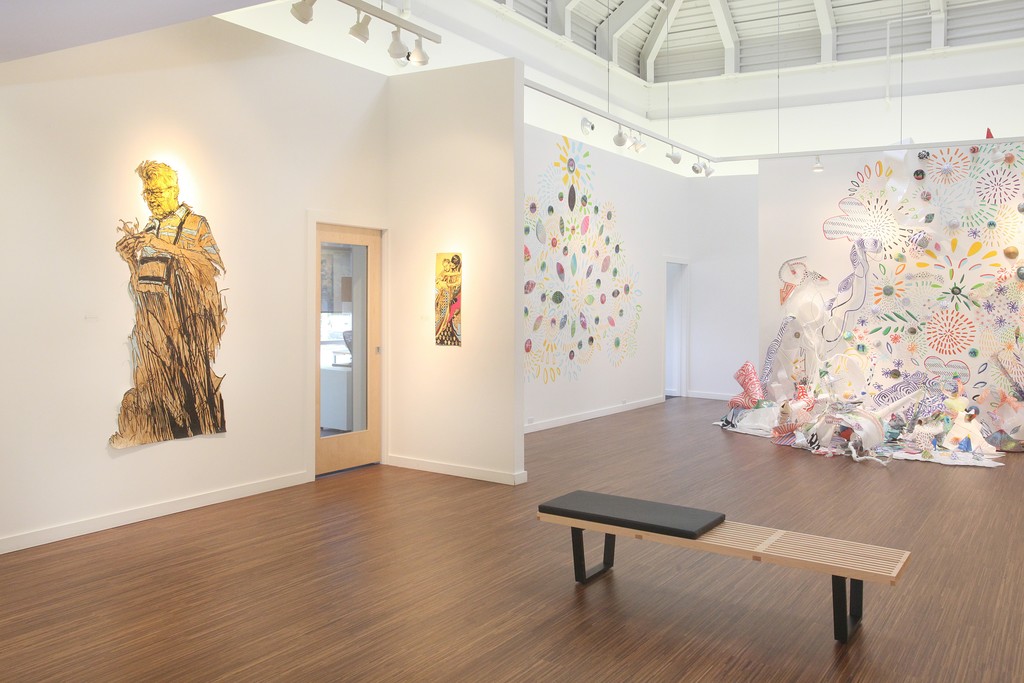 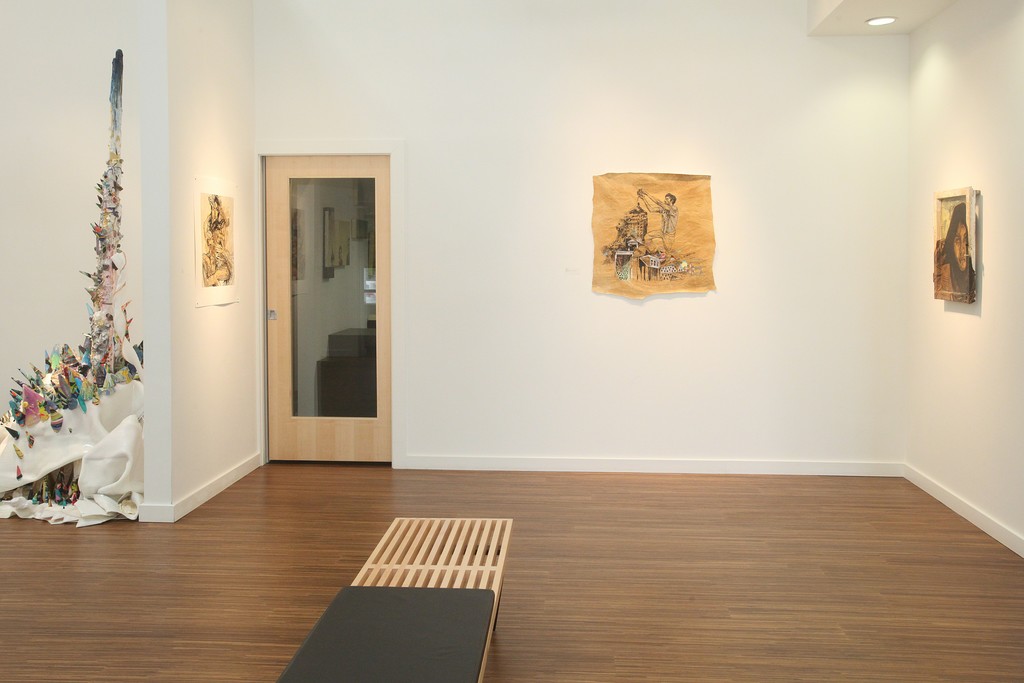 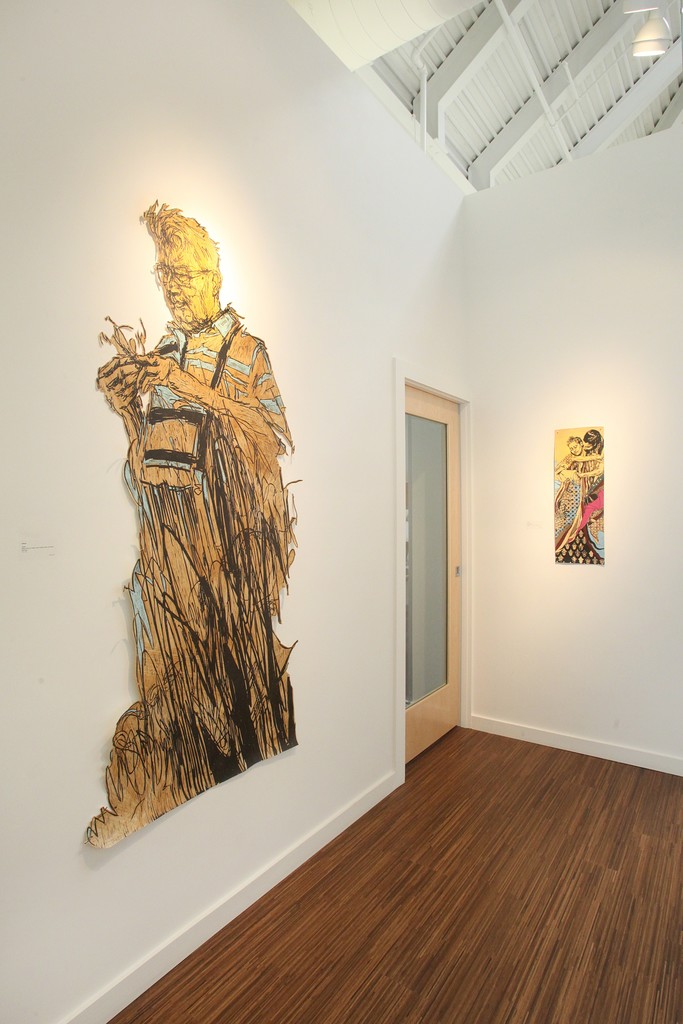 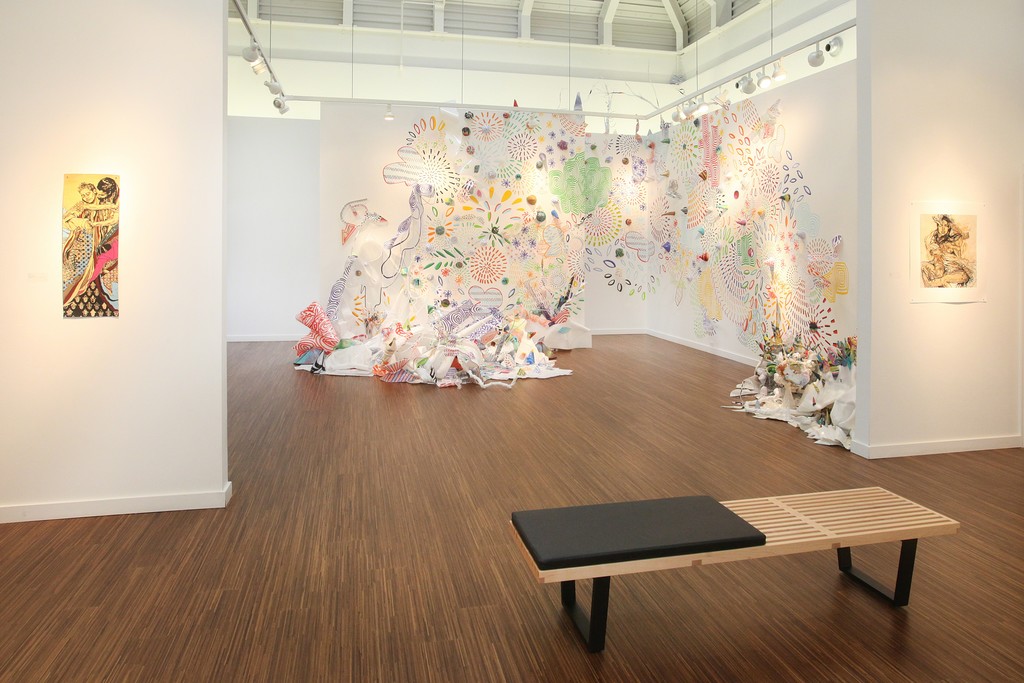 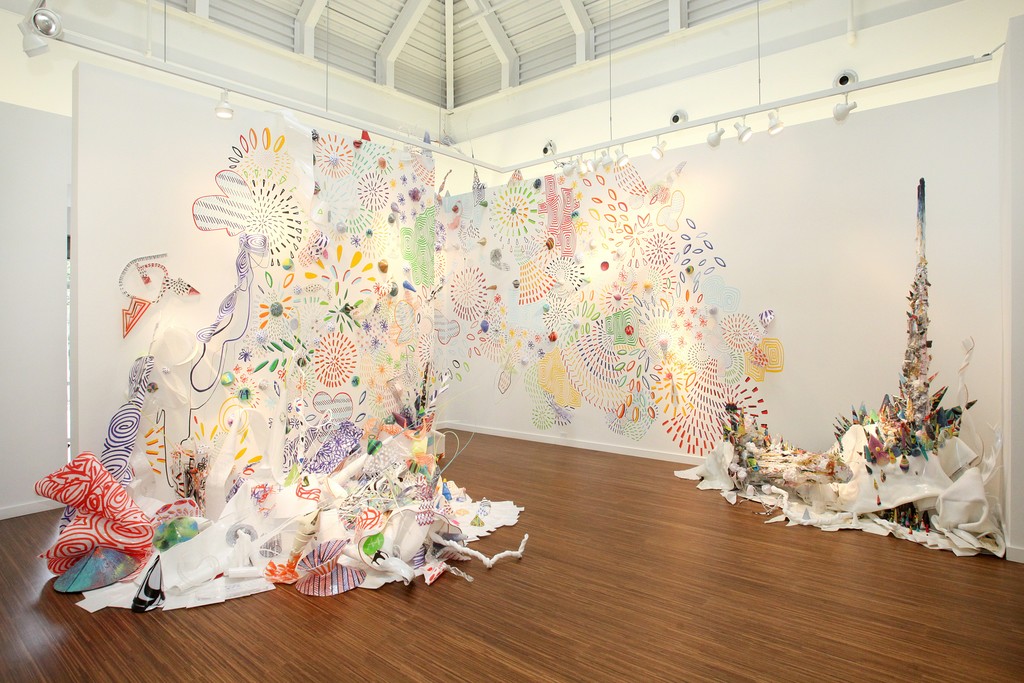 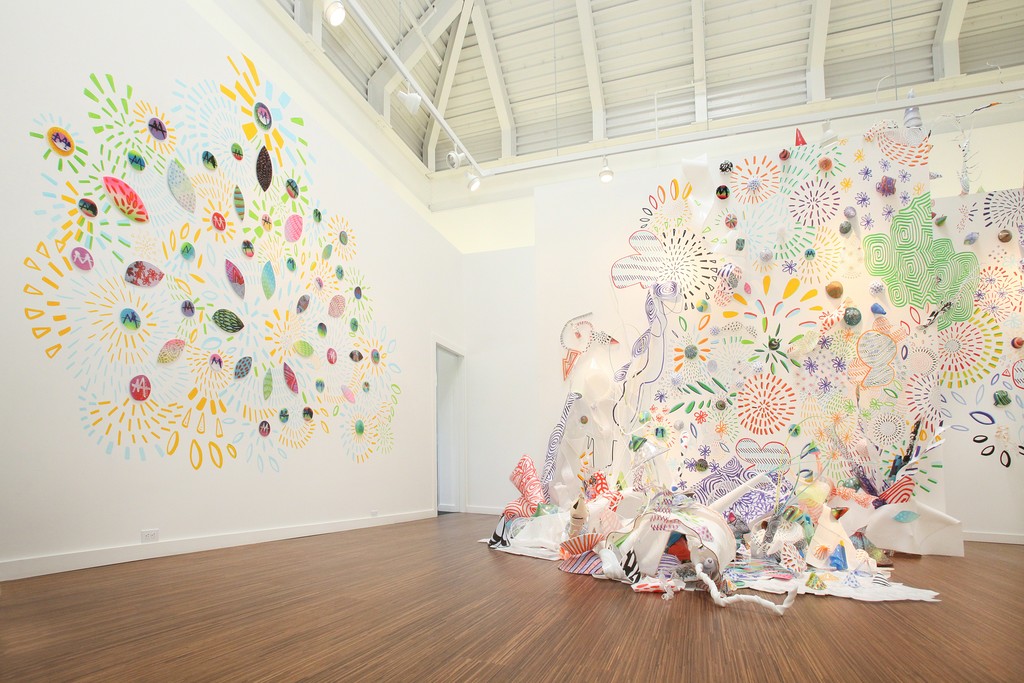 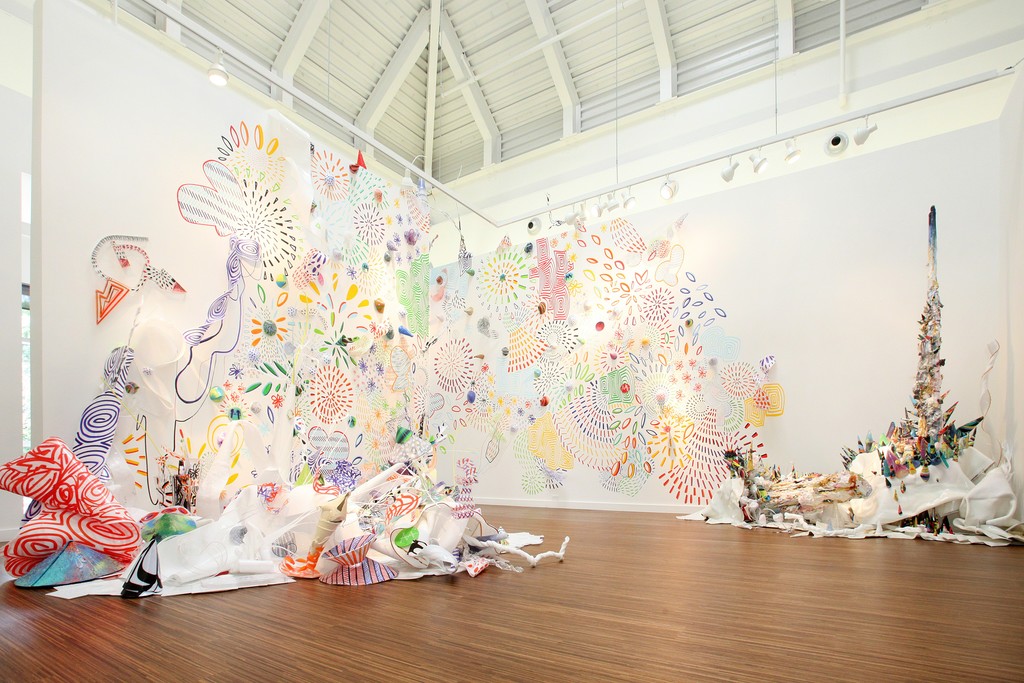 Florida Mining is pleased to announce POST, an exhibition featuring street artist Swoon and the art collaborative MILAGROS. Swoon is highly regarded and internationally known for her collaborative and community activist based works. “Alden,” over six feet tall, is one of the works featured in the exhibition and is of Swoon’s grandfather, who is expected to be in attendance at the April 4th opening. MILAGROS was recently awarded their first public art project in downtown Jacksonville, Florida as a part of a larger urban renewal initiative. Works presented by MILAGROS in this exhibition will primarily be sitespecific installation pieces, mostly made from materials mined and repurposed from the Harbinger recycling bins.

Swoon is a street artist born in New London, Connecticut, and raised in Daytona Beach, Florida. She moved to New York City at age nineteen, and specializes in life-size wheatpaste prints and paper cutouts of figures. Swoon, real name Caledonia Dance Curry, studied painting at the Pratt institute in Brooklyn and started doing street art around 1999.

Swoon regularly pastes works depicting people, often her friends and family, on the streets in various places around the world. Usually, pieces are pasted on uninhabited locations such as abandoned buildings, bridges, fire escapes, water towers and street signs. Her work is inspired by both art historical and folk sources, ranging from German Expressionist wood block prints to Indonesian shadow puppets.

MILAGROS was founded in 2008 by Felici Asteinza and Joey Fillastre, and is a Florida based collective comprised of a varied and ambitious cast of artists and musicians. The objective of MILAGROS is to reinforce individual strength through collaboration. Mutual respect and trust allow for a free environment for evolving creation. Elements of play and spontaneity culminate in surprise and elation.
MILAGROSBoth Asteinza and Fillastre are native Floridians hailing from Walton County and Lakeland, respectively. They met at Florida State University where they both received their Bachelors Degrees in Studio Art. In Tallahassee they began painting together and working with their collaborators: Courtney Asztalos, Alex Fogt, Jourdan Joly, Pat Lane, Colleen Matthes and too many more to name. In 2010 they moved to Gainesville and co-founded the Church of Holy Colors with Evan Galbicka. Currently they are road dogs, traveling wherever miracles are needed.

MILAGROS has exhibited at the Contemporary Arts Center in New Orleans and the Freedom Tower in Miami, to name a few. They also have permanent murals in Brooklyn and St. Petersburg and were featured artists at SXSW and Art Basel 2012. They are currently working on their first public art commission in downtown Jacksonville where they will have a permanent mural at the entrance of the Spark District.

Synchronicities and serendipity birth a new mysticism, based in the celebration of growth.