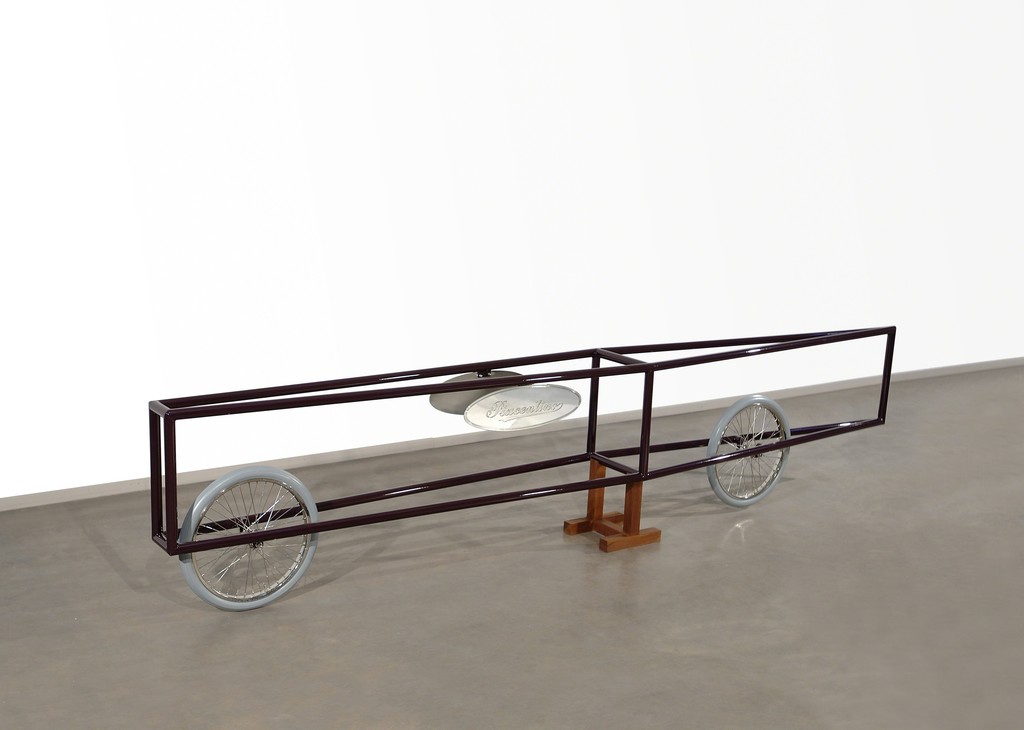 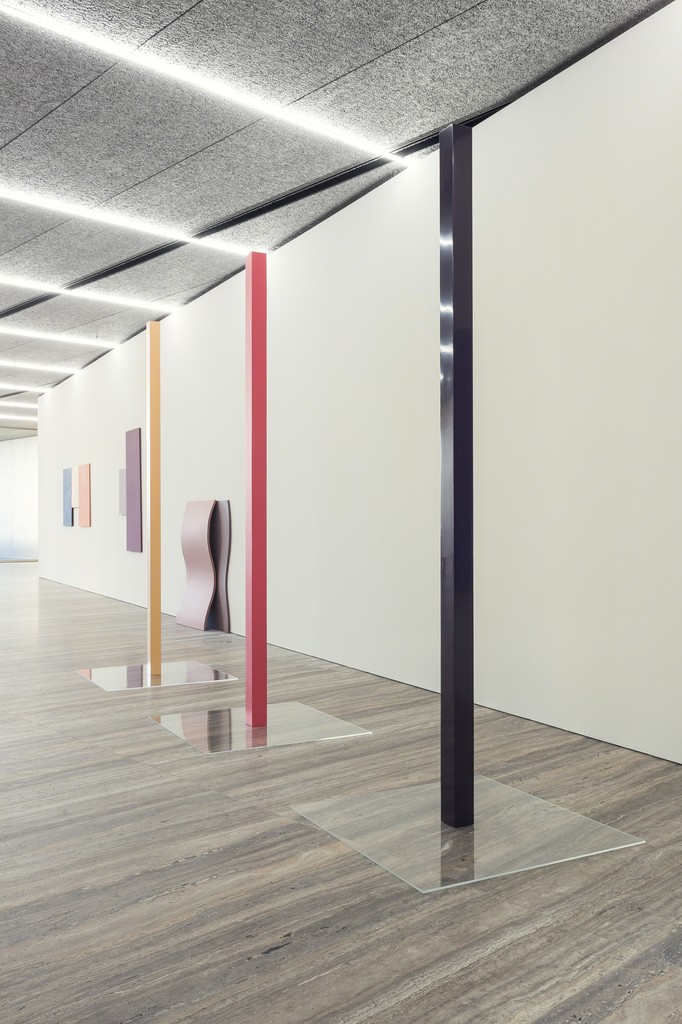 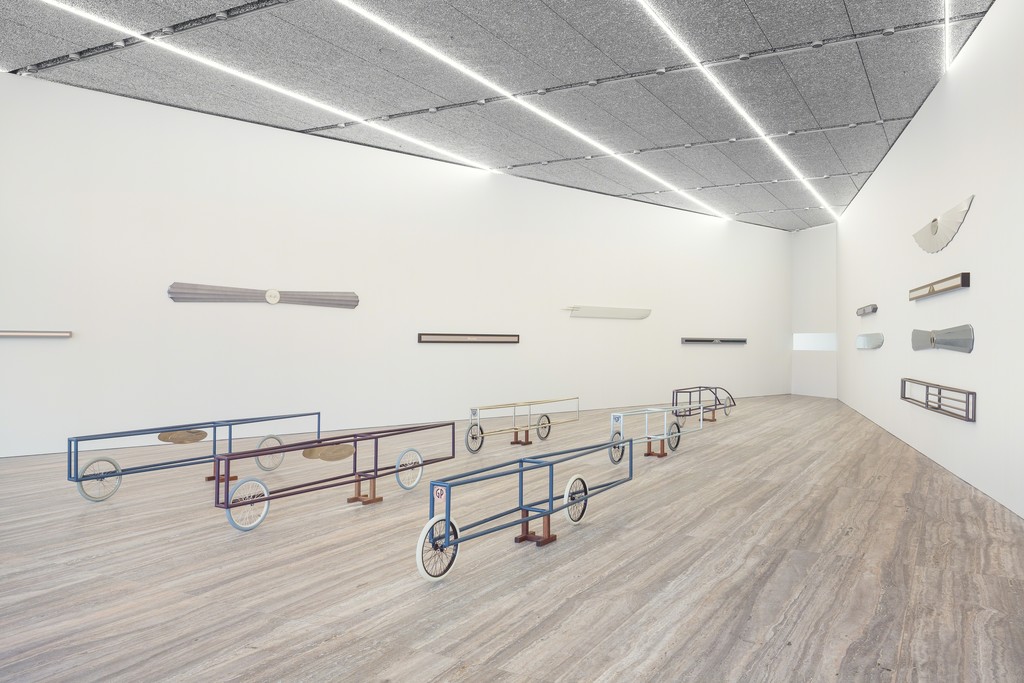 Piacentino’s research began in an artistic and cultural background characterized by an
increasing detachment from the subjectivism which had animated Action Painting and
Informalism, as well as by the development of a new visual language mixing the attention to
pop and consumer imagery and the appreciation for both geometrical and primary forms. His
work, however, did not embrace either of the dominant tendencies of those times - Pop art
and Minimal art - but, according to the original reading of his work provided in this exhibition,
generated a dialectic process between the two.

In order to research the terrain where these two currents converge, Piacentino turned to the
world of velocity and transportation including cars, motorcycles and planes, all products of
pop culture which, while not part of the realm of pure art, are expressions of industrial
aesthetics. In this respect, the artist approaches the aerodynamic fantasies of many
Californian artists: from Billy Al Bengston to Craig Kauffman, from John Mc Cracken to John
Goode. As Germano Celant explains: “It is in this historical climate of oscillation between art
and design, handicrafts and industry, the useful and the useless, the one-off piece and the
mass-produced object, that we can place the contribution of Piacentino, whose otherness
and uniqueness lie precisely in the dialectic between the two poles. Since 1966 his
sculptures have been aiming for a result that transcends the functional object, even though
the latter remains recognizable as a possible industrial product with decorative
characteristics, as it is derived from a culture steeped in applied science, handicrafts and the
precision of mechanics and sophisticated engineering processes”.

As Gianni Piacentino states: “At its core, my work always contains the importance of the
technical and mathematical control of the result. I don’t allow myself to give way to
repressed feelings and emotional drives”. His adherence to this is proven by his attraction
for the construction discipline, which implies both elegance and perfection, as well as an
inclination for complete control over the physical and chromatic features of materials.
Throughout his career, the artist has led his own creative process following all the different
phases implied in a given industrial production scheme, as happens in the realm of design.
As Germano Celant states, his artistic and aesthetic adventure represents ”an absolute
escape from the imperfection, instantaneity and randomness of making art, in order to access a universe of perfection, calculation and concentration that can compete with a motor or flight vehicle, on both a sublime and an absolute level”.

On the ground floor of the Podium a selection of works realized from 2015 back to the early
1970’s are presented in an exhibition display made-up of three full height walls which
obliquely cross the gallery space. The acrylic paintings on canvas Seaplane Painting open
the show, along with metallic structures such as Cantilver and Race, which resemble the
easels used by the artist in his studio to store his works. Seaplane Painting, on the other
hand, integrates the figurative element of the float plane belonging to industrial iconography
which stands out against monochrome-filled backgrounds and, in some cases, metallic bars
similar to those employed for the construction of the aircrafts themselves. Various works
paying homage to the Wright Brothers are also presented. All of them testify Piacentino’s
passion, from the 1970’s to the present day, for these American pioneers and their
engineering and technological expertise. The paintings are characterized by a flat painting
technique and impersonal, purely decorative composition, consisting of image, signature and
frame. Relevant space is devoted to ground vehicles from the 1970’s and 1980’s, which mark
a clear break with Piacentino’s production previous to 1968. The aesthetic of gravity and
inaction which characterized his first works is replaced by the mobility of an object projected
toward a journey via road, eventually turning the exhibition space into a field of action. The
artist’s commitment to the racing world has led him to maximize the control over the
technical and visual features of his vehicles, even though the artisanal aspect of their
construction has been enhanced by the use of computer software. The ground floor display
ends with his works titled Combine Painting, which integrate canvases with various painted
metallic elements arranged according to a precise layout, bars featuring the artist’s initials
GP transformed into an industrial logo, wings and propellers reminiscent of aviation
symbolism.

On the upper floor, divided into two separate longitudinal spaces, the exhibition focuses on
the dawn of Piacentino’s career, from 1968 to 1965, a time that marked his initial involvement
in the Arte Povera exhibitions (Turin, Bologna, Amalfi), which he later distanced himself from
in order to follow an autonomous artistic path, documented in this anthological exhibition.
This section of the show features canvases and monochromatic objects that employ colors
resulting from chromatic experimentations and diverse mixtures rather than non-primary
colors. From the initial canvases, which already bear a sculptural dimension, the artist moves
on to the three-dimensionality of poles, overturned Ts and angular structures, and in 1966
starts working on the shape of the table, which loses its functional features through a
variation of its customary dimensions and proportions. Poles, tables, portals and selfsupporting
structures realized in those years seem to belong to the research field of primary
forms. On the contrary, they configure themselves as archetypes, as seemingly functional
objects for daily life, creating a new aesthetic reality. As Piacentino explains: “I like to study
common objects and negate their function in order to turn them into entities of line and
surface intended only to be observed”.

The exhibition is completed by a publication, edited by Germano Celant and published by
Fondazione Prada. Consisting of three volumes - Book I: Sketches and Projects; Book II:
Sculptures and Paintings and Book III: Gianni Piacentino - it includes an essay by Germano
Celant comprising an interview with the artist and a chronology of Gianni Piacentino’s
exhibitions history, featuring documents, images, collages and computer-drawings realized
by the artist from 1965 to 2015.

Gianni Piacentino - short bio
Born in 1945 in Coazze (Turin), Gianni Piacentino lives and works in Turin. His work has been
featured in a number of solo and group exhibitions worldwide, most recently at the
Fondazione Giuliani in Rome, Metropolitan Art Society in Beirut, Michael Werner Gallery in
New York and London, and Veneklasen/Werner in Berlin. In 2013, Piacentino was the subject
of a large-scale survey at Centre d’Art Contemporain in Geneva. Other exhibitions include
the Museum of Contemporary Art Chicago (2009), MoMA PS1 in New York (1997), Centro
de Arte Reina Sofía in Madrid (1990), the Gesellschaft für Aktuelle Kunst in Bremen (1981),
the Nationalgalerie in Berlin (1978), the Palais des Beaux Arts in Brussels (1972), the
University Museum in Sydney and the Museum am Ostwall in Dortmund (both in 1971). He
also participated in dOCUMENTA (6) in Kassel (1977), the 45th Venice Biennale (1993) and
the Quadrennial in Rome (1973 and 2005).