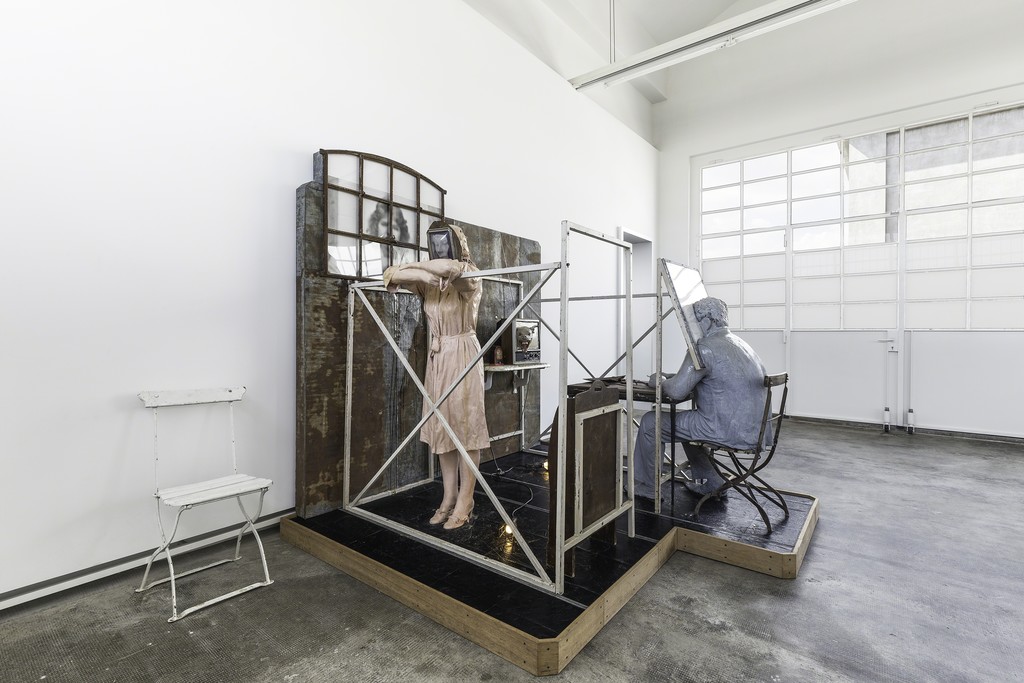 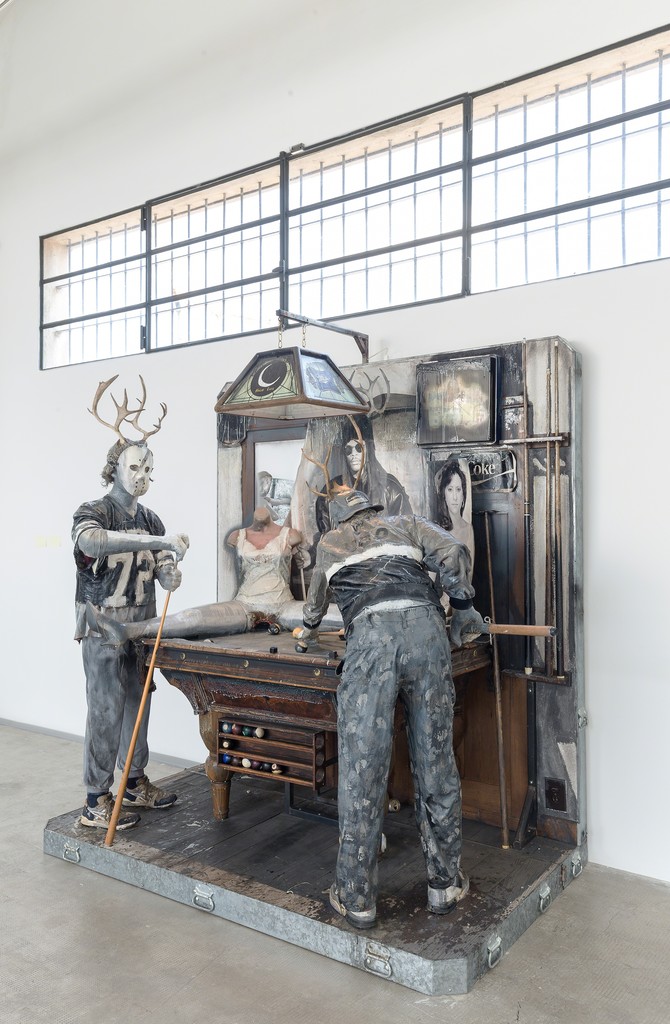 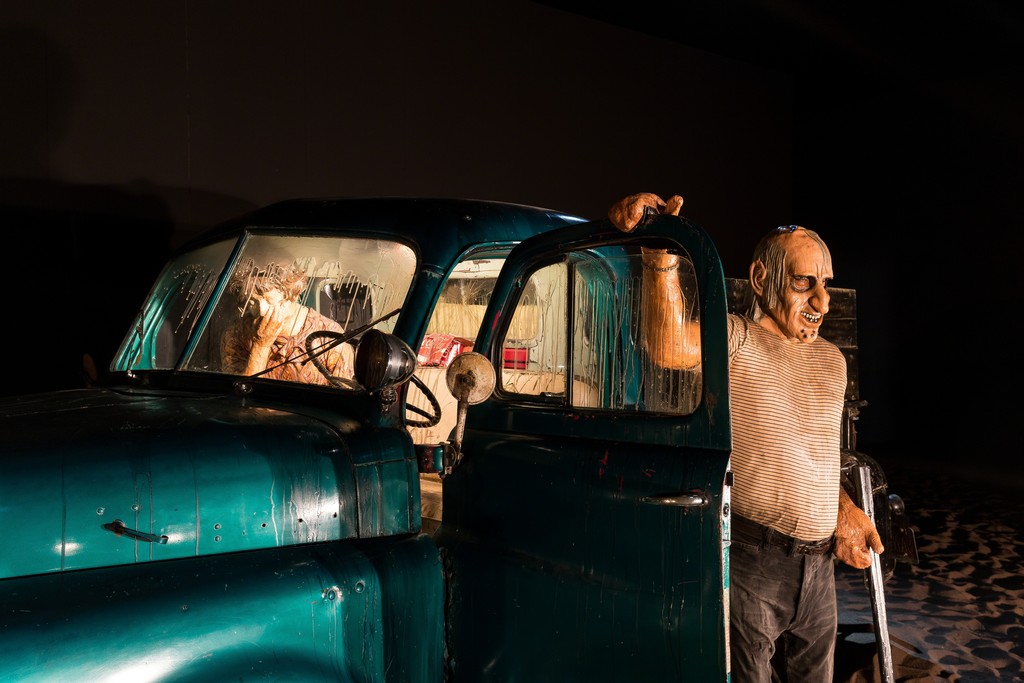 Five Car Stud was created by Edward Kienholz from 1969 to 1972, and first exhibited at documenta 5 in Kassel, curated by Harald Szeemann. A life-sized reproduction of a scene of racial violence, Five Car Stud is considered one of the American artist’s most significant works. Despite the controversy and attention that it earned from critics right from its debut, the piece remained hidden from view in the storage of a Japanese collector for almost forty years. The artwork was only presented once again to the viewing public in 2011 and 2012 following restoration, first at the Los Angeles County Museum of Art and then at the
Louisiana Museum of Modern Art in Denmark. Today the artwork is part of the Prada Collection, and is being shown for the first time ever in Italy as part of this exhibition, where it forms the central nucleus of an exhibition path that runs from the Sud gallery to the Deposito, and extends into an external space, presenting 25 artworks including sculpture, assemblages and tableaux realized by the Kienholzes from 1959 to 1994, as well as documentation material on the history and making of Five Car Stud.
Defined by Kienholz as the representation of the “burden of being an American,” Five Car Stud recreates a dark, isolated environment, illuminated merely by the headlights of four automobiles and a pickup truck. At the center of the scene lies an African-American, knocked to the ground and surrounded by five white men wearing Halloween masks. The aggressors hold him, grabbing his arms and legs, while one of them prepares to castrate him. There is also a sixth masked man holding a shotgun in vigil, while a white woman who had been on a date with the victim is now forced to watch, shocked and powerless, as the white attackers
inflict their punishment. A frightened boy, the young son of one of the perpetrators, also witnesses the scene from the passenger seat of his father’s car. The black figure has a double face: an internal face in wax expressing sadness and resignation, and a transparent external face that displays a monstrous grimace of terror and rage. The torso, however, is built out of an oil pan inside of which six letters float, which might form the word “nigger.”

Five Car Stud catapults the viewer into a nightmarish situation, immersing him and her in a dimension – either removed or forgotten– of extreme violence. More than forty years after it was first created, the artwork’s expressive force, its powerful symbolic charge and the lucidity of the accusation against racial persecution retain their original strength.

An autodidact and artist from Washington State, Edward Kienholz (1927–1994) founded Ferus Gallery with Walter Hopps in Los Angeles in 1957. In 1961, after his first solo show, curated by Hopps, at Pasadena Art Museum in California, Kienholz, along with other West Coast artists, was selected for the William Seitz-curated exhibition “The Art of Assemblage” at MoMA in New York, where his work was displayed alongside Picasso, Schwitters, Duchamp and Cornell. Thanks to this event, he started to gain international recognition and acclaim from European critics and curators such as Pontus Hulten, who devoted him the exhibition “11+11 Tableaux”, presented in 1970 in Stockholm, Amsterdam, Düsseldorf, Paris, Zürich and London. Right from his earliest works, the artist drew upon a realistic, quotidian
and unequivocal imagination to create “an art of repulsion,” in direct opposition to a narcissistic component present in Abstract Expressionism, or the fetishism of industrial merchandise and materials typical of Pop Art and Minimalism. As Germano Celant explains, “Kienholz made no attempt to sublimate the meanness and tragedy of life, its conditions of loneliness and triviality, but used them as a way of putting a shine on a low and popular universe, in which the wasted and the dirty, the depraved and the filthy represented a new and surprising beauty: a feeling or perceiving that stupefies and excites, impresses and sickens, but never leaves you indifferent.”

Between the end of the 1950s and the beginning of the 1960s the American artist developed an original language that led him to small-scale assemblages and painted, wooden reliefs, as can be seen in the artwork on display ’Ore the Ramparts We Watched, Fascinated (1959), inspired by the American-Soviet space race, as well as the realization of large installations that combined realistic figures reproduced in lifelike scale with furniture and recovered objects that Kienholz himself defined as “tableaux,” or “environmental assemblages.” The Nativity (1961), on display as part of this exhibition, was originally conceived as a tableau, and was designed as a three-dimensional reconstruction of a church interior. The final result is a bizarre representation of a nativity scene in which the human and divine figures are substituted by commonplace elements like automobile hood ornaments, living room lamps and parts of toys.

Beginning in the 1960s, Kienholz’s tableaux began to directly represent scenes of death, war, sex, violence against women, racial discrimination and religious intolerance, becoming extensions of real life and openly political acts. As Celant affirms, the protagonist of Kienholz’s artworks is mostly “the combination of leftover pieces of mannequins, wristwatches, television screens, abandoned and threadbare clothing, or plaster casts of real human bodies. The assemblage takes on the metaphorical ambiguity of a terrible but real situation. Viewers who approach it can of course reject it, but its realistic appearance turns
them into voyeurs, prompting a sense of participation that, whether born of sympathy or repulsion, is always active and shared: the extraneous made personal.”

In 1972, Edward Kienholz and his wife Nancy Reddin began an artistic collaboration. From this point forward the pair would co-sign all the works they produced until Edward Kienholz’s death in 1994. From 1973 the Kienholzes lived permanently between Hope in Idaho and Berlin, and later established a third home and studio in Houston, Texas. This collaboration produced objects and installations that investigate the dark and pathological side of the cultural and social model adopted by America and Western civilization in general. The assemblages that incorporate or simulate monitors, of which The Death Watch (1976), Bout
Round Eleven (1982) and The Twilight Home (1983) are included in this exhibition, are powerful representations of the invasiveness of television and its colonization of the popular imagination, and attempt to react critically to its pervasive stupidity and the boorish violence of mass media information. In The Bronze Pinball Machine with Woman Affixed Also (1980), a blend of women’s legs and a pinball machine, the female body is reduced to an object of pure sexual entertainment. The artwork Jody, Jody, Jody (1994) was inspired by a real life event and evokes a deplorable instance of child abuse. Meanwhile, The Merry-Go-World orBegat by Chance and the Wonder Horse Trigger (1991–1994), which appears to be little more than a colorful carousel for children, conceals an empathetic contemplation on the
random determinism of birth. The viewer is asked to spin a wheel of chance before entering the flashing lights and jolly music of The Merry-Go-World; inside, one of eight small tableaux is revealed, describing the accident of birth, and its governance on cultural, societal and economic fate. One of the last artworks produced by Edward and Nancy Reddin Kienholz is an installation titled 76 J.C.s Led the Big Charade (1993–1994). Included in the Milan exhibition, this installation transforms baby dolls, wagon parts and different cultural and historical depictions of Jesus Christ into crucifixes, taking aim at religion in its institutionalized forms devoid of spirituality. In a courtyard space next to the Sud gallery, viewers will find The Caddy Court (1986–1987), a mobile assemblage that includes a van
inserted between the front and back of a Cadillac: inside it displays a grotesque and funereal representation of American Supreme Court justices, transformed into skeletons and taxidermy animals.

“Kienholz: Five Car Stud” is completed by an illustrated publication, which is part of
Fondazione Prada’s Quaderni series, including an essay by the curator and in-depth
documentation exploring the artworks on display.