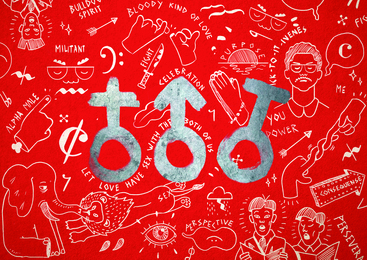 Nastio Mosquito, I Make Love To You. You Make Love To Me. Let Love Have Sex With The Both Of Us. 2016 Illustrations by Robin Velghe. Courtesy of the artist. 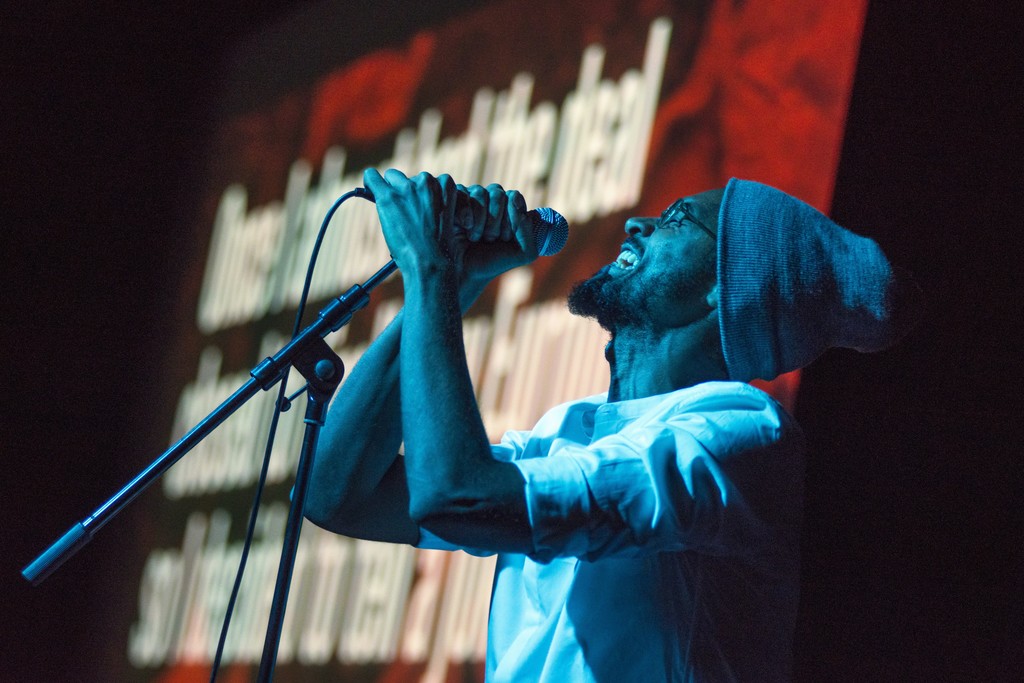 Multifaceted artist Nástio Mosquito (Luanda, Angola, 1981) soon left behind his training as a television cameraman and film director to embrace an artistic practice that brings together music, video, installations and performance in unmistakably personal ways. Internationally acclaimed for his irreverent and provocative performances, Mosquito, more often than not, has adopted the role of an unpredictable showman, comprising the characters of a presenter, singer, actor and theatrical producer. Mosquito’s practice revolves around the theme of cultural inheritance, which, as a fusion of the past, present and future, runs counter to more static and limiting concepts like, tradition, identity and their futurity. Intrigued by the potential and specificities of different verbal, musical and visual forms of language, the artist creates engaging public performances in which politics and entertainment become complementary aspects in a unitary artistic program. His voice and his body, often at the center of his multimedia propositions, are, on the occasion of his project at Fondazione Prada, powerfully absent. This is a clear aesthetic twist in the work of an artist that has reached a solid mature stage in his career. “T.T.T.-Template Temples of Tenacity” represents Mosquito’s immersion in a collective idea of total art, inviting collaborators and audience to take part in a unique sensorial experience.

“T.T.T.-Template Temples of Tenacity” features three entirely new works by Mosquito and will take place on the ground floor of the Podium, the Cinema and the outside spaces of Fondazione Prada. The project comprises three distinctive elements for which Mosquito has collaborated with a group of international artists. WEorNOT (Nastivicious’ Temple #1) (2016) is a site-specific installation featured on the ground floor of the Podium, conceived and realized by Nastivicious —the collective that Mosquito and Spanish artist Vic Pereiró founded in 2008— in collaboration with illustrator Ada Diez. Through this collaboration, the Podium turns into a contemporary temple, a platform for collective communion, in which the glass surface of the façades, covered by caricature-like illustrations, are transformed into large-scale stained glass windows. A satirical reflection on the contemporary social and political panorama, WEorNOT(Nastivicious’ Temple #1) encourages the viewers to challenge their own convictions and to immerse themselves in a reflective experience. In a quest exploring language’s potential for transformation, visitors will be presented with a series of mottoes collected in a book that Nastivicious has compiled as a critical and humorous misrepresentation of set phrases, proverbs and popular adages.

Mosquito will also present Synchronicity Is My Bitch: The Cinematic Experience (2016), to be hosted in September at Fondazione Prada. Perhaps his most personal work since Nástia’s Manifesto (2008), it is an audiovisual work assembling the artist’s latest album, Gatuno, Eimigrante & Pai de Família (2016), with a number of visual and filmic references extracted from a series of African films, documentaries and forms of vernacular television from the past twenty years. The project draws inspiration from the multiple imaginaries around love —in all its possible meanings— as absorbed by Mosquito, who calls himself “a child of the Cold War”, referencing his teenage years growing in the mist of Angola’s Civil War (1975 – 2002). Reflections on human relationships, affection and alienation, as observed in different social and political settings, merge here with the sounds and waves of Mosquito’s music. Screened in loop at Fondazione Prada’s Cinema, the work will play in an informal and shared environment to create a sensorial event that goes beyond the usual cinematic experience.

As Elvira Dyangani Ose states, "Never before has Nástio Mosquito been so attentive to affection. Without abandoning his provocative propositions, the artist invites us to his most critical endeavor yet: entering a space and time where judgment and evaluation are suspended, where things do not necessarily need to make sense, where –if one is up to the challenge— we are encouraged to lose ourselves in our own innate sensitiveness. ‘T.T.T.-Template Temples of Tenacity’ is a collective multisensory project, in which one is exposed to transcend the limits of one’s convictions to embrace an unprecedented experience: the capacity of just being. Understanding the levels of risk, flirting with the possibility of failure, Mosquito offers us a template, a draft, a solid departure point from which to endure who we are, what we are, like never before”.

“True Value” and “T.T.T.-Template Temples of Tenacity” will be accompanied by two illustrated publications in the Quaderni series, published by Fondazione Prada. True Value will consist of two interviews with Theaster Gates by curators Elvira Dyangani Ose and Niccolò Gravina. T.T.T.-Template Temples of Tenacity will feature a conversation between Nástio Mosquito, the exhibition curator and the scholar Henriette Gunkel.